[0001] The use of powered devices can enhance procedural efficiency and efficacy in the field of dentistry, including endodontic, periodontic, and hygiene procedures. For example, a powered device that provides ultrasonic energy through a treatment tip can result in better cleaning and debridement of hard to reach areas or portions of teeth having a complex geometry in these fields, as well as in oral surgery.
[0002] In various situations it can be useful to provide a wired or wireless device for performing a dental or surgical procedure. Devices used in the medical and dental fields such as endodontics, periodontics, hygiene, and other surgical procedures, oral or otherwise, are traditionally performed using hand tools, or externally powered devices. Both are effective, but can have drawbacks. For example, the use of hand tools can result in a lengthier procedure and cause pain, discomfort, or fatigue for the clinician, patient, or both. Powered devices alleviate those problems and can be effective, but can introduce other difficulties. For example, powered devices with cords can be cumbersome to operate because of the fluid connections and cords that add appreciable weight to the device. Further, fluid connections and cords associated with the powered device can be difficult to manipulate during the procedure. During use, care must be taken to avoid tangling of cords, occlusion of fluid pathways, or damage to either.
[0003] In the medical field, it can be useful to consider patient safety, time of procedure, and efficacy in the surgical environment when developing new tools and techniques. Like the dental field, powered devices can have advantages over manually powered or unpowered hand tools, including reducing procedure time and providing minimally invasive techniques. However, current powered devices can have drawbacks including insufficient operating life, heavier weight as compared with hand tools, and insufficient available power. Commercially available piezoelectric devices for use in medical and dental procedures can include inefficient drive circuitry that requires higher input power to achieve suitable results. Excess energy is dissipated as heat or other losses, thereby potentially requiring large or higher rated circuit elements, heat sinks and a large device footprint. Previous piezoelectric scaler circuit designs used hard switching and power hungry approaches to force mechanical resonance to occur at a defined electrical signal near the mechanical resonance point. Typically, hard switching was accomplished by connecting a transformer to the piezoceramic which was also connected to "ground." Such electrical circuits are lossy since the energy from each pulse charges the capacitive piezoceramic load and then the energy is discharged to ground. Examples of circuitry employing hard switching for driving ultrasonic devices can be found in document US2013331875, and U. S. Pat. Nos. 3,596,206, 3,651,352, 4,445,063, and 4,168,447.
[0004] In yet another aspect, some prior cordless devices can be coupled to a source of fluid. In order to provide the fluid to the treatment site, a pump, either remote from, or internal to the device, can be used. Internal electronic pumps draw power away from the power supply, which in the case of a battery power supply can drain the battery more quickly.
[0005] The control center for existing devices can be located remotely, in which case the operator of the device can need to continually and simultaneously support the device and adjust the control system, which can add time and require additional assistance to complete the procedure. Also, alternating current (AC) powered devices can require features such as shielding from power line voltages and currents.
[0006] These and other problems can also arise during operation of an ultrasonic device. Therefore, there is a need for a handheld ultrasonic device that overcomes the aforementioned drawbacks.
[0007] The device of the invention is defined in claim 1.
[0008] The additional aspects of the invention are defined in the dependent claims.
[0009] These and other aspects and advantages of the device and circuitry disclosed herein will become better understood upon consideration of the detailed description of the drawings.

FIG. 1 is a perspective view of an embodiment of a handheld ultrasonic device with an attached fluid source according to the present disclosure;

FIG. 2 is an exploded view of the handheld ultrasonic device of FIG. 1;

FIG. 4 is a side view of an embodiment of a piezoelectric transducer according to the present disclosure;

FIG. 5 a cross-sectional side view of the piezoelectric transducer of FIG. 4, taken along the line 5-5 of FIG. 4;

FIG. 6 is an illustration of an embodiment of the internal circuitry of the device of FIG. 1 according to the present disclosure;

FIG. 7A is a first example schematic of the current flow through the circuitry of FIG. 6;

FIG. 7B is a second example schematic of the current flow through the circuitry of FIG. 6;

FIG. 8 is an illustration of another embodiment of the internal circuitry of a device according to the present disclosure;

FIG. 9 is a schematic of the current flow through the dental device circuitry of FIG. 8;

FIG. 10 is a perspective view of a dental device according to the present disclosure attached to a remote fluid source;

FIG. 11 is a perspective view of a dental device according to the present disclosure with an attached fluid supply attached to one end of the device;

FIG. 12 is a perspective view of a dental device according to the present disclosure with an attached fluid supply;

FIG. 13 is an elevational side view of the fluid supply of FIG. 10;

FIG. 14A is a perspective view of a device according to the present disclosure illustrating the flow of fluid along an external fluid path;

FIG. 14B is a perspective view of a dental device according to the present disclosure illustrating the flow of fluid along an internal fluid path;

FIG. 16 is a perspective view of the device of FIG. 12 showing the fluid supply of FIG. 13 positioned apart from the device for attachment thereto;

FIG. 19 is a perspective view of the device of FIG. 12 in a charging station;

FIG. 20 is a schematic of an example configuration of a circuit according to the present disclosure;

FIG. 21 is a perspective view of another embodiment of a device according to the present disclosure;

FIG. 23 is an exploded view of the device illustrated in FIG. 21;

FIG. 24 is a side view of the device illustrated in FIG. 21 showing a fluid pump incorporated therein as indicated by dashed lines;

FIG. 25 is a plot of impedance as a function of phase angle for a commercially available piezoelectric transducer connected to a dental hygiene treatment tip;

FIG. 26 is a schematic illustration of an electrical circuit equivalent to a piezoelectric transducer outside of mechanical resonance; and

FIG. 27 is a schematic illustration of an electrical circuit equivalent to a piezoelectric transducer at mechanical resonance.

[0050] With reference to FIG. 25, an example device according to the present disclosure having a circuit as shown in FIG. 20 was loaded with a treatment tip. The treatment tip was an ultrasonic dental hygiene scaling tip designed for removal of dental plaque and calculus build up, and was securably coupled to the ultrasonic dental transducer headpiece with a torque wrench. The leads to the ultrasonic handpiece were then connected to an impedance analyzer to obtain electrically equivalent circuit parameters and features related to the mechanical resonance of the coupled handpiece and treatment tip system. Impedance and phase spectra were collected by a Bandera PV70A impedance analyzer designed for collecting data from high power ultrasonic transducers. The resonant frequency (Fs) was determined to be 27,536 Hz by identifying where the impedance is a local minimum and the phase is zero. Further parameters related to the present example are shown in Table 1 below. Based on the measured values for CT and FS, suitable parameters for the parallel capacitor and series inductor are as follows: Cpar = 4.7nF and Lser would be between about 1.0mH and about 5.25mH to ensure that the combined Lser+Cpar resonance frequency is larger than the mechanical resonance of the transducer, but less than the 3rd harmonic mechanical resonance (i.e. 27,536Hz and 82,608Hz, respectively).
Table 1:

[0051] The terminology used herein is for the purpose of describing particular embodiments only and is not intended to be limiting of the disclosure. As used herein, the singular forms "a", "an" and "the" are intended to include the plural forms as well, unless the context clearly indicates otherwise. It will be further understood that the terms "comprises" and/or "comprising," when used in this specification, specify the presence of stated features, integers, steps, operations, elements, and/or components, but do not preclude the presence or addition of one or more other features, integers, steps, operations, elements, components, and/or groups thereof.
[0052] The description of the present disclosure has been presented for purposes of illustration and description, but is not intended to be exhaustive or limited to the disclosure in the form disclosed. Many modifications and variations will be apparent to those of ordinary skill in the art without departing from the disclosure. Explicitly referenced embodiments herein were chosen and described in order to best explain the principles of the disclosure and their practical application, and to enable others of ordinary skill in the art to understand the disclosure and recognize many alternatives, modifications, and variations on the described example (s). Accordingly, various embodiments and implementations other than those explicitly described are within the scope of the invention, as defined by the following claims.

at least one boost converter (204) receiving power from an energy source (202);

an inductor (212) in series with the square wave driver (208) for converting a square wave to a sinusoidal wave; and

a loaded resonance frequency of between 25-50 kHz,

a backmass having a backmass first end (64) and a backmass second end (66) and including a solid body having a series of rings (62) of different radii,

wherein said circuit is capable of producing an applied voltage waveform of between 100 and 800 volts peak-to-peak; and 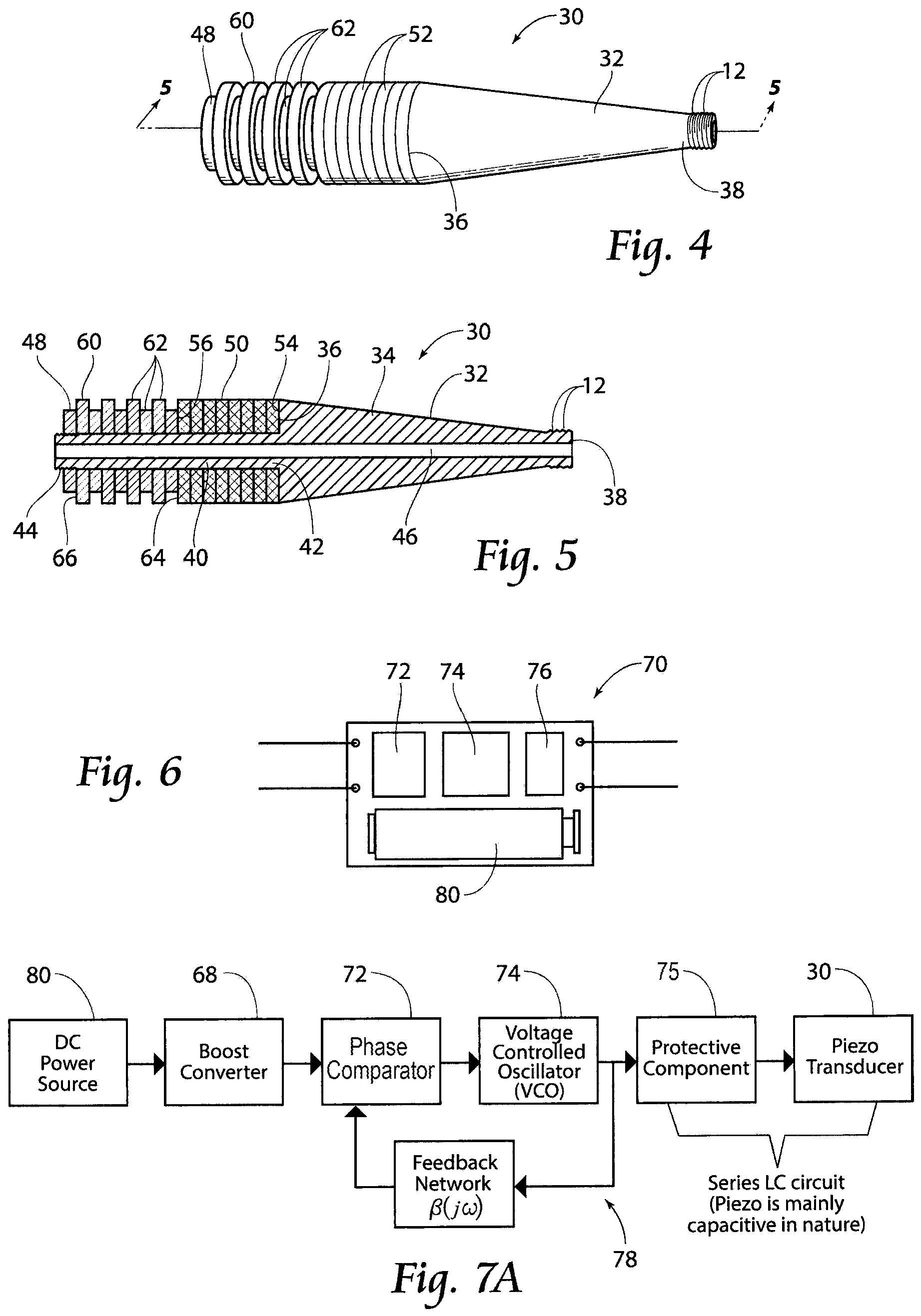 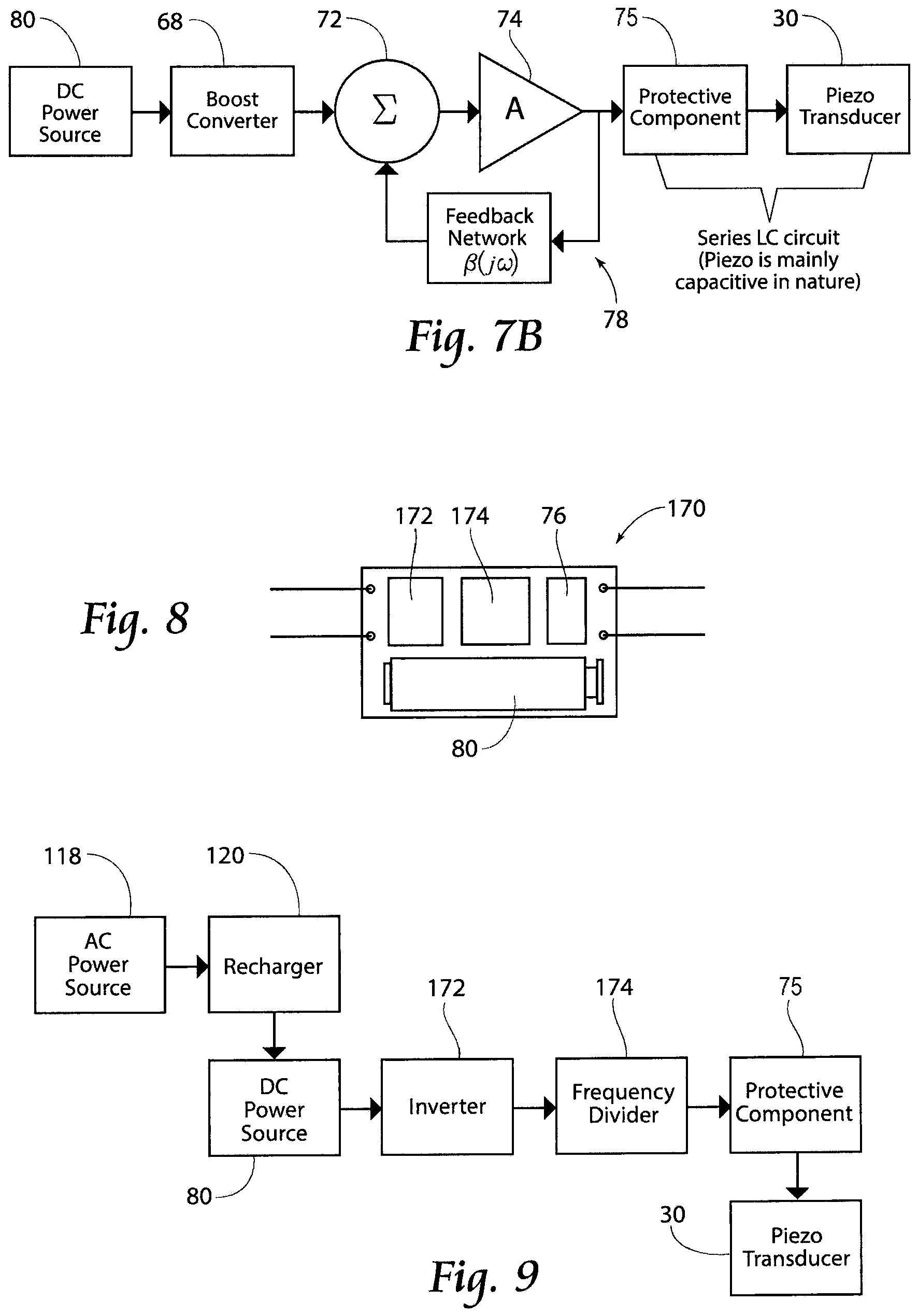 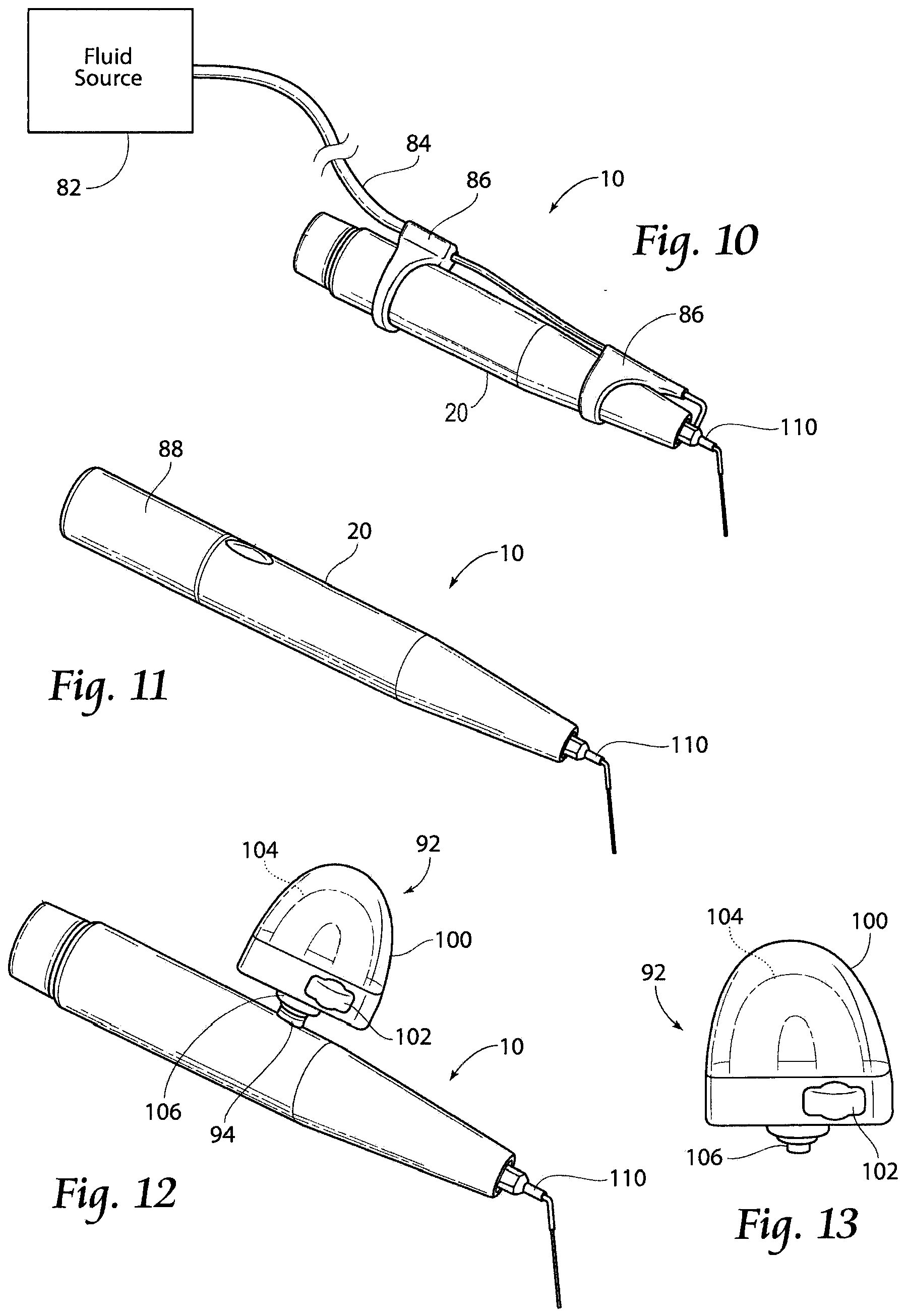 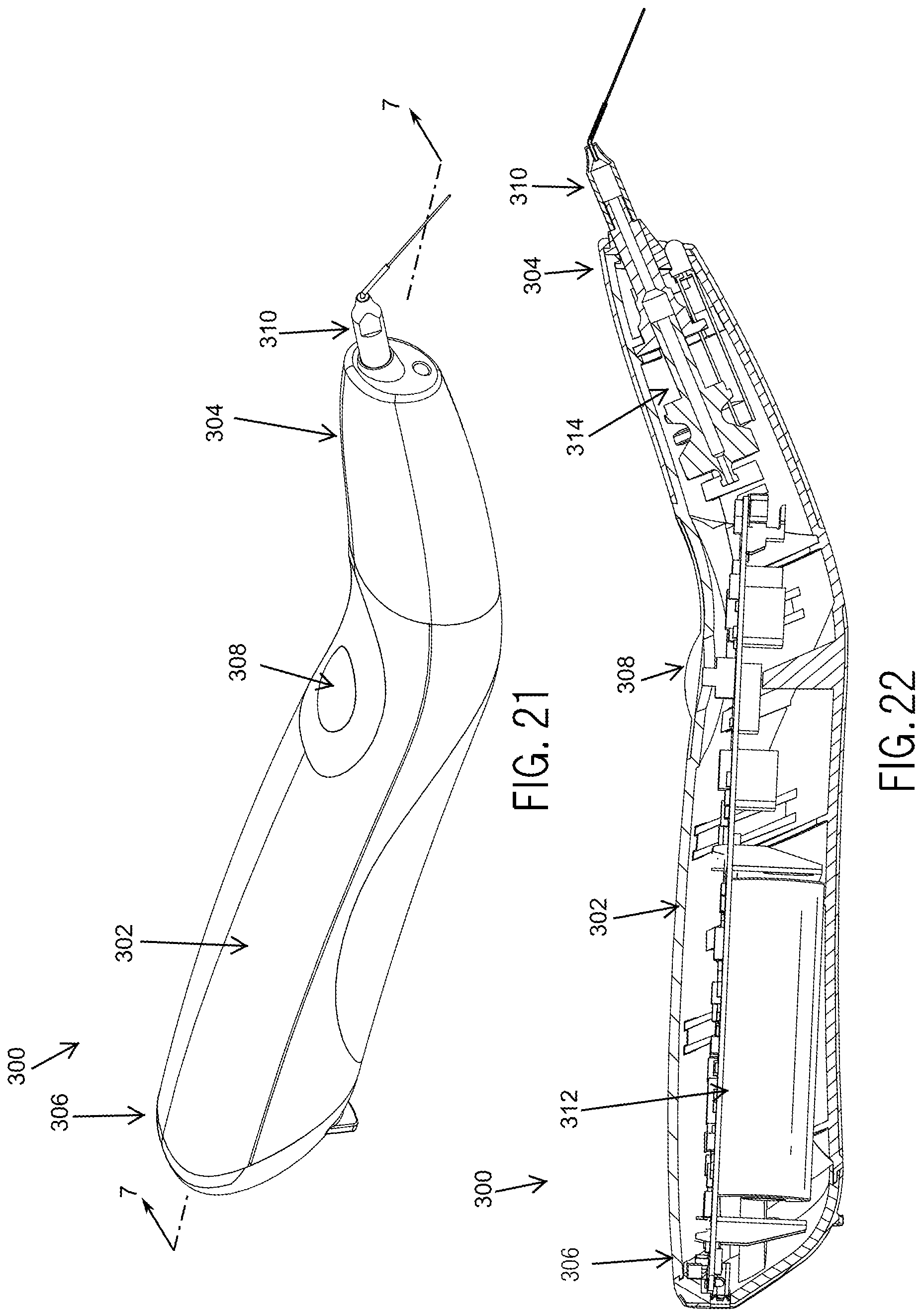 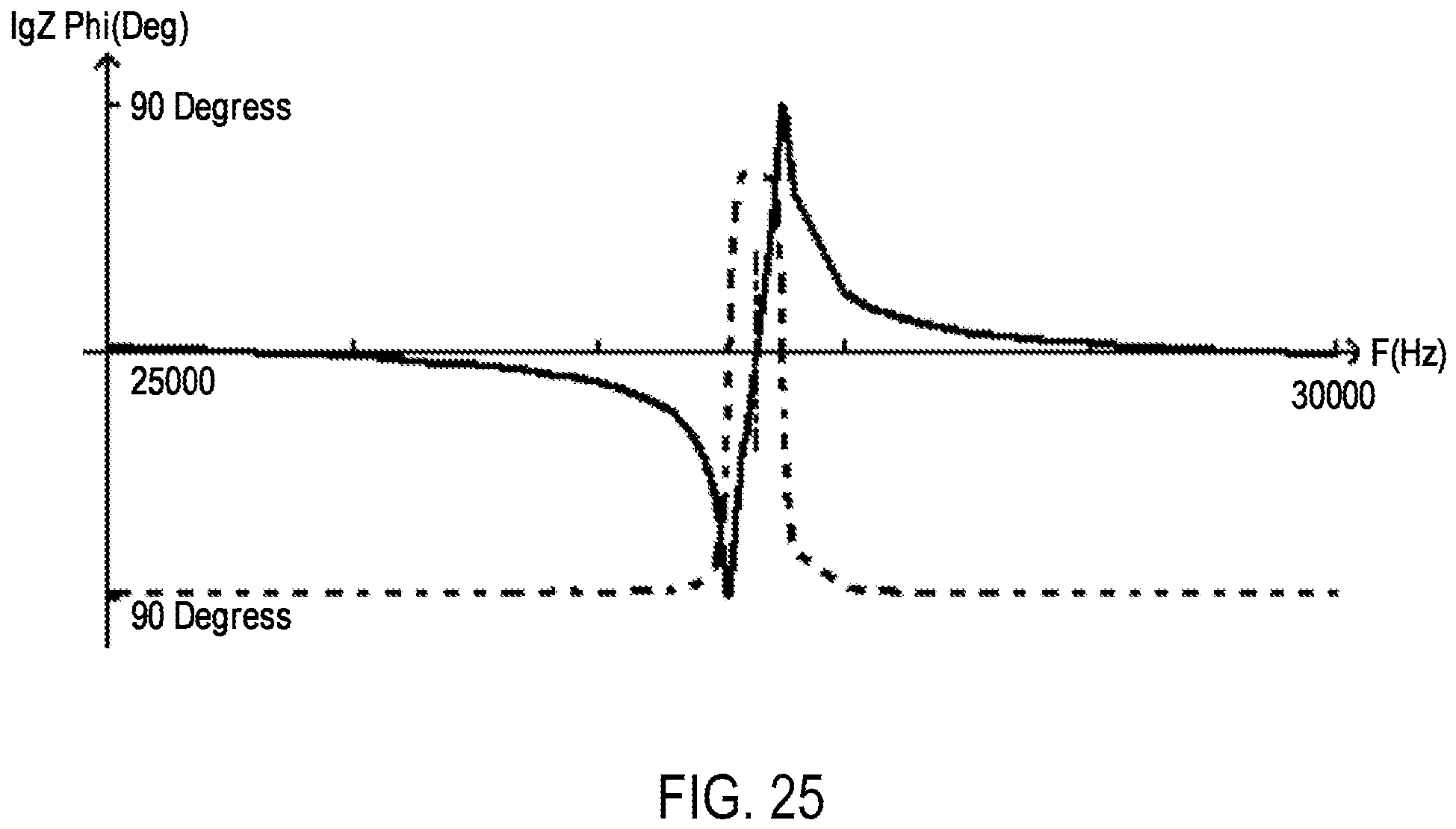 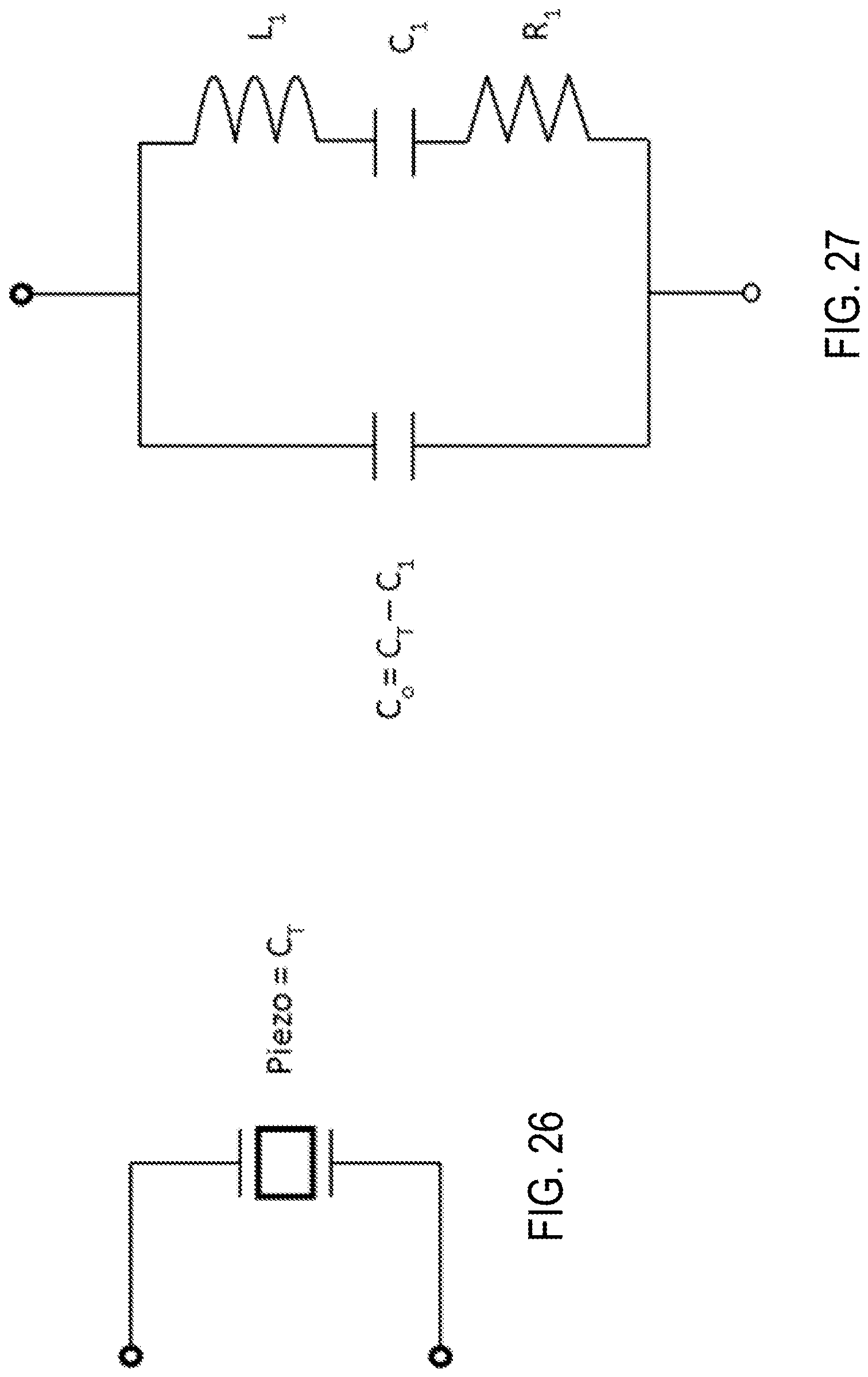