[0001] A nacelle is the housing for a turbofan gas turbine engine used to power, for example, a commercial airliner. The nacelle and the engine together are referred to as the propulsion system or power plant of the aircraft. The nacelle forms the external aerodynamic surfaces of the propulsion system, and also helps form the duct for the bypass air from the fan, as well as encloses all the components and auxiliary devices surrounding and attached to the engine. The nacelle may also optionally provide a reverse thrust means to generate reverse thrust to slow the aircraft, for example during landing. FIG. 1 illustrates a typical gas turbine engine inside a nacelle 22, which are together attached via a pylon 21 to the underside of an aircraft wing 20. The nacelle 22 includes a forward section 23 and an aft section 12. The forward section 23 may be formed from an inlet and a fan cowl, which could be combined together. The aft section 12 may include a thrust reverser.
[0002] In operation, an ambient air flow 56 on the exterior of the nacelle 22 generates drag. The drag force increases fuel consumption. Accordingly, it is desirable to minimize the drag.
[0003] If the flow around the nacelle 22 is laminar the drag force will be reduced compared to a turbulent flow. Aircraft and nacelle designers have utilized nacelle external aerodynamic shapes that maintain a natural laminar flow over a portion of the first section 23 of a nacelle. By carefully selecting the aerodynamic profile (which is done through analysis including computational fluid dynamics, and through experimentation), natural laminar flow can be achieved beginning at the inlet lip and extending back as much as 25-76 cm (10-30 inches). The portion where it is desired to achieve laminar flow much be clean of debris (e.g., bugs) and very aerodynamically smooth (e.g., fastener heads must be very flush and parallel with the surrounding surface). Steps and gaps can cause the laminar flow to trip and transition to turbulent flow. Many other active or hybrid natural/active techniques have been proposed for achieving and maintaining laminar flow on an aircraft nacelle and other aircraft surfaces. One such technique is through boundary layer ingestion or suction where the boundary layer next to the aircraft surface is pulled through small holes in the surface to remove the low energy boundary layer and regenerate it or maintain it at a minimum energy level. Active or hybrid laminar flow techniques may achieve and maintain laminar flow more consistently than natural means alone, and may be able to extend further aft the region on first section 23 of nacelle 22 which has laminar flow.
[0004] While boundary layer suction or ingestion has been proposed for use on an aircraft surface such as an aircraft nacelle for drag reduction, no successful commercial systems have flown yet. There is a need for solutions to the many practical problems that remain to be solved.
[0005] US 5297765 A and FR 2857650 A1 disclose features of the preamble of claim 1.

[0008] The present disclosure is illustrated by way of example and not limited in the accompanying figures in which like reference numerals indicate similar elements.

FIG. 1 illustrates components and devices associated with an aircraft nacelle in accordance with the prior art.

FIG. 2A illustrates a side perspective view of a nacelle including a reference line denoting a maximum diameter associated with the nacelle.

FIG. 2B illustrates plenums formed by ribs in the nacelle of FIG. 2A for providing suction for boundary layer ingestion through small holes formed in the nacelle skin.

FIG. 3A illustrates a side perspective view of a nacelle including a reference line denoting lines of constant static pressure for the boundary layer around the nacelle.

FIG. 3B illustrates plenums formed by ribs in the nacelle of FIG. 3A.

FIG. 4A illustrates a side perspective view of a nacelle including reference lines denoting lines of constant static pressure for the boundary layer around the nacelle.

FIG. 4B illustrates plenums formed by ribs in the nacelle of FIG. 4A.

[0009] Only Fig. 4A and 4B correspond to the invention. The other figures are figures of the state of the art or help to understand the invention.

1. A nacelle of an aircraft, comprising:

a surface that is profiled such that, during cruise flight operation, lines of constant static pressure of a boundary layer around the nacelle (422; 522) in a given region are wavy and not in a single plane that is normal to an engine axis;

characterised in that the nacelle further comprises a plurality of circumferential ribs (426), each of the ribs (426) being associated with and tracing a respective one of the lines of constant static pressure.

wherein the first and second plenums (324) are separated from one another by one of the lines of constant static pressure corresponding to a respective one of the ribs (426).

4. The nacelle of claim 3, wherein the first plenum (324) is configured to traverse a substantial portion of a circumference of the nacelle (322).

5. The nacelle of any preceding claim, further comprising:

wherein the zone (524) comprises perforations that are configured to enable a suction of air. 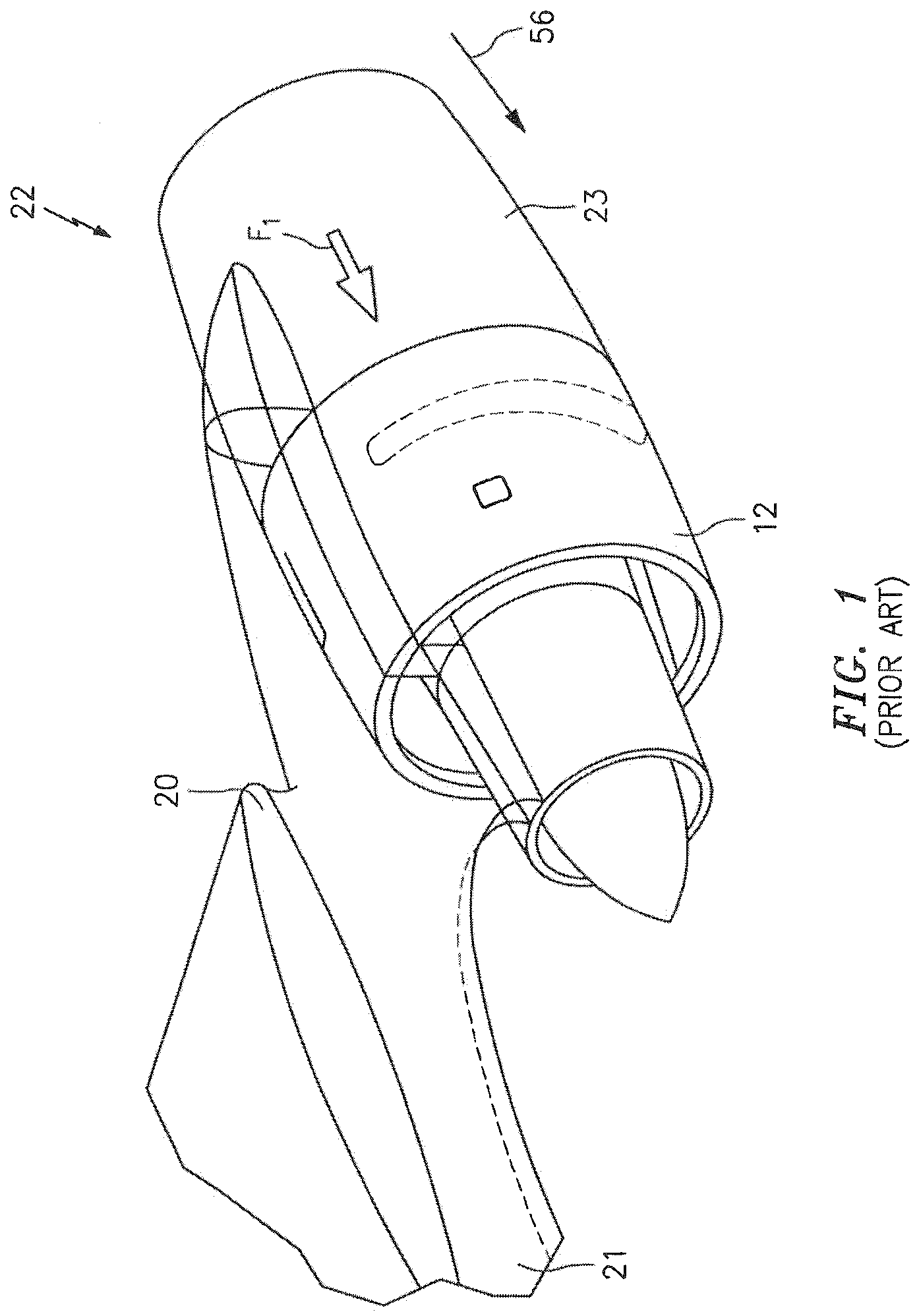 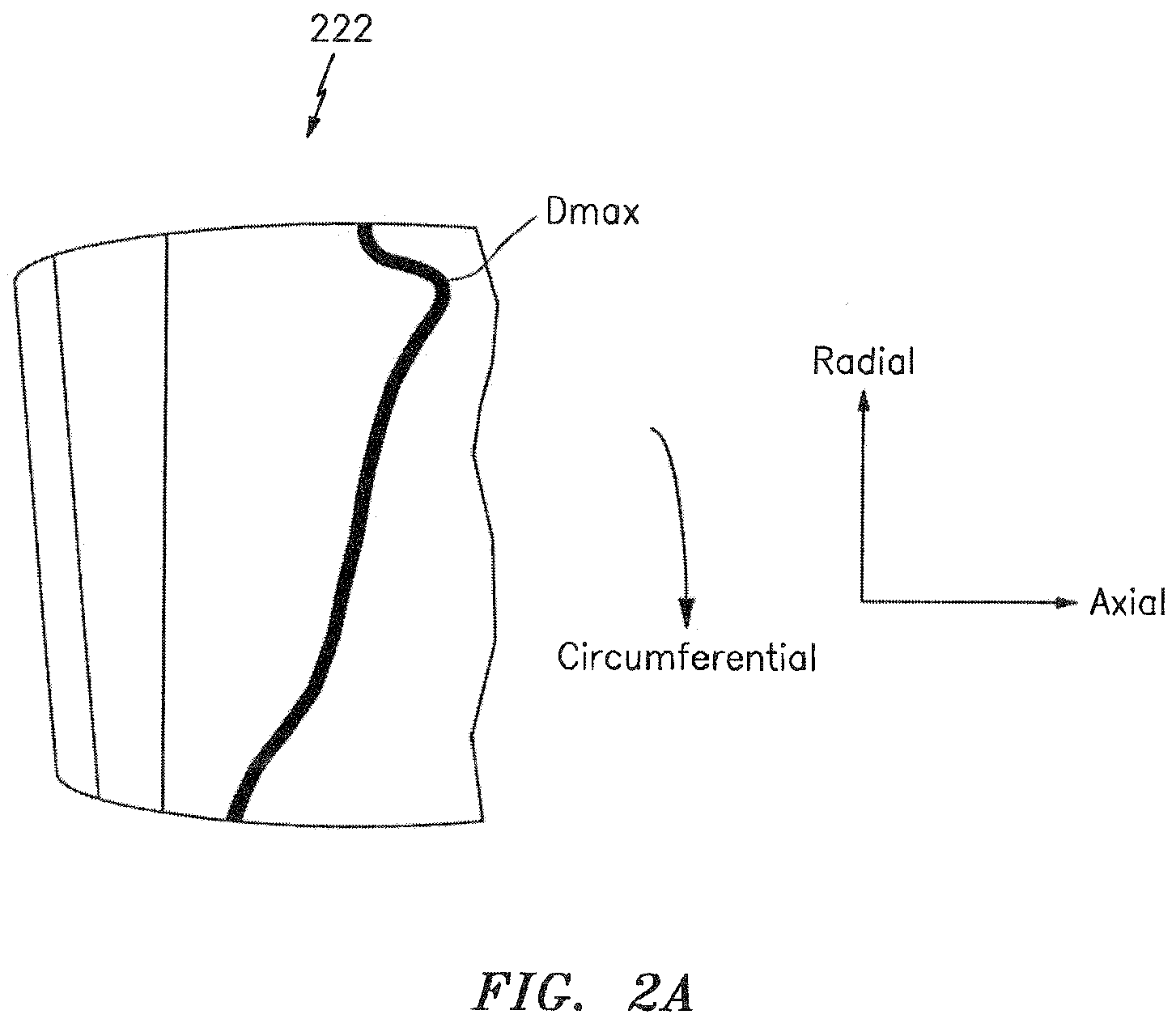 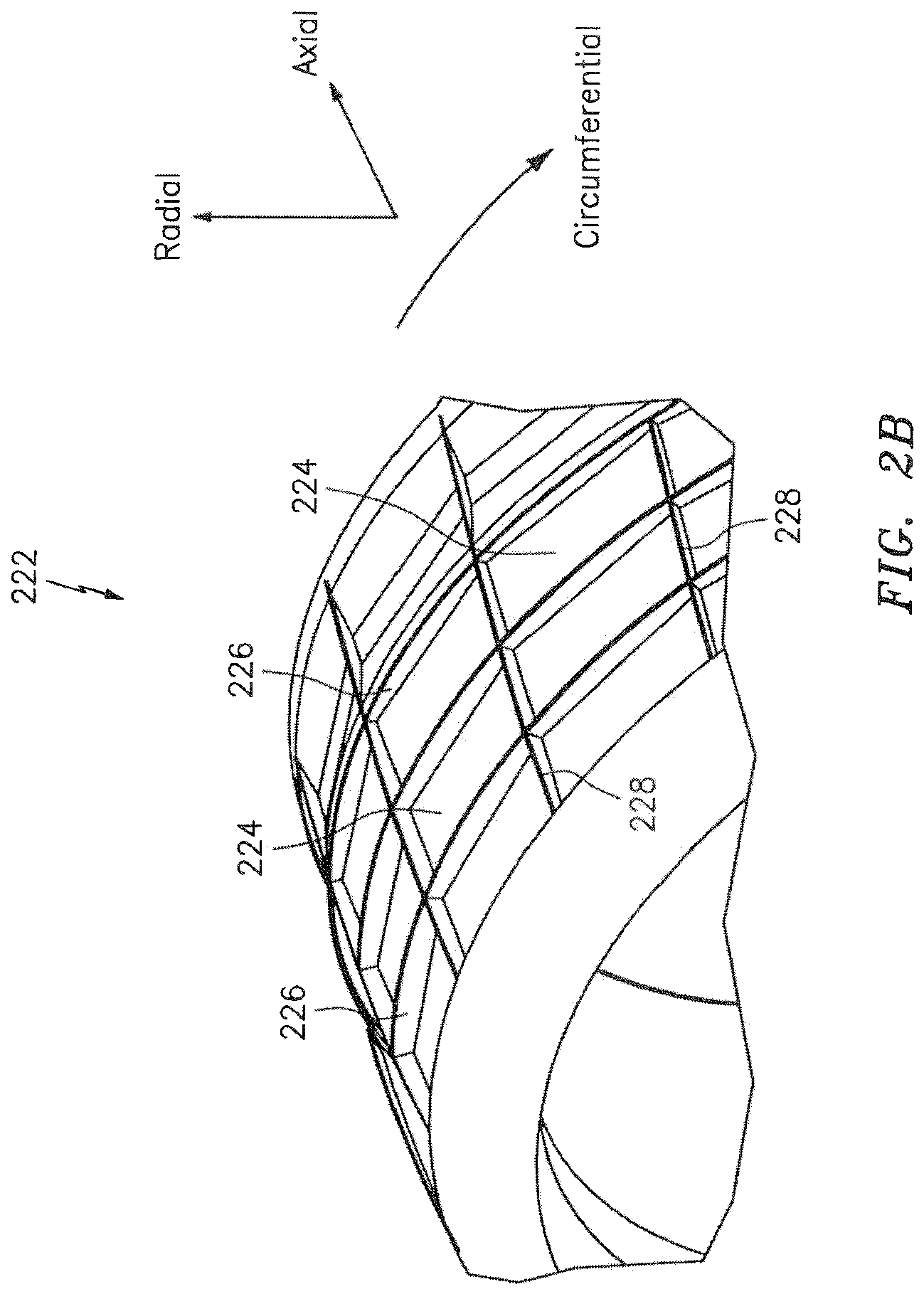 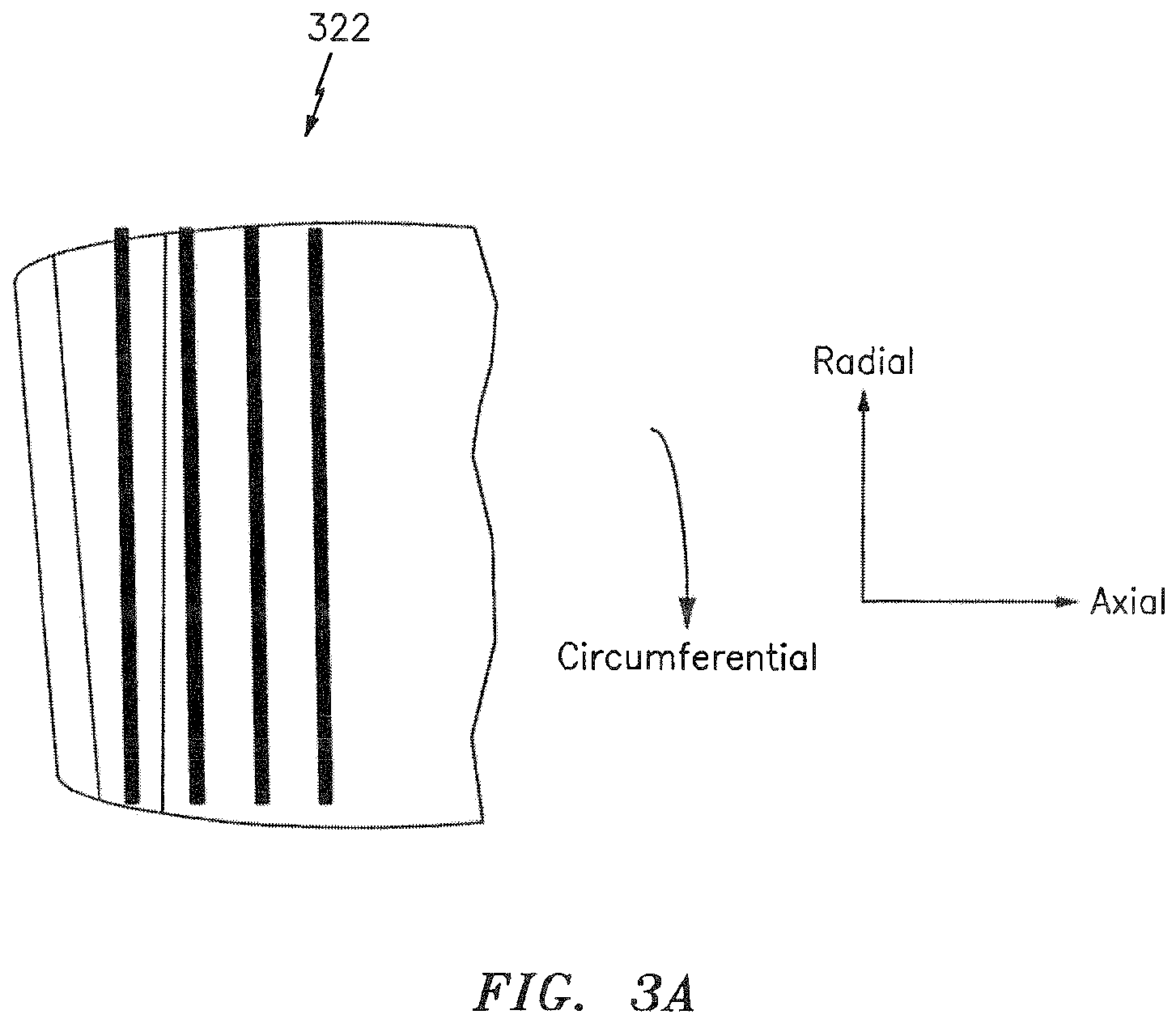 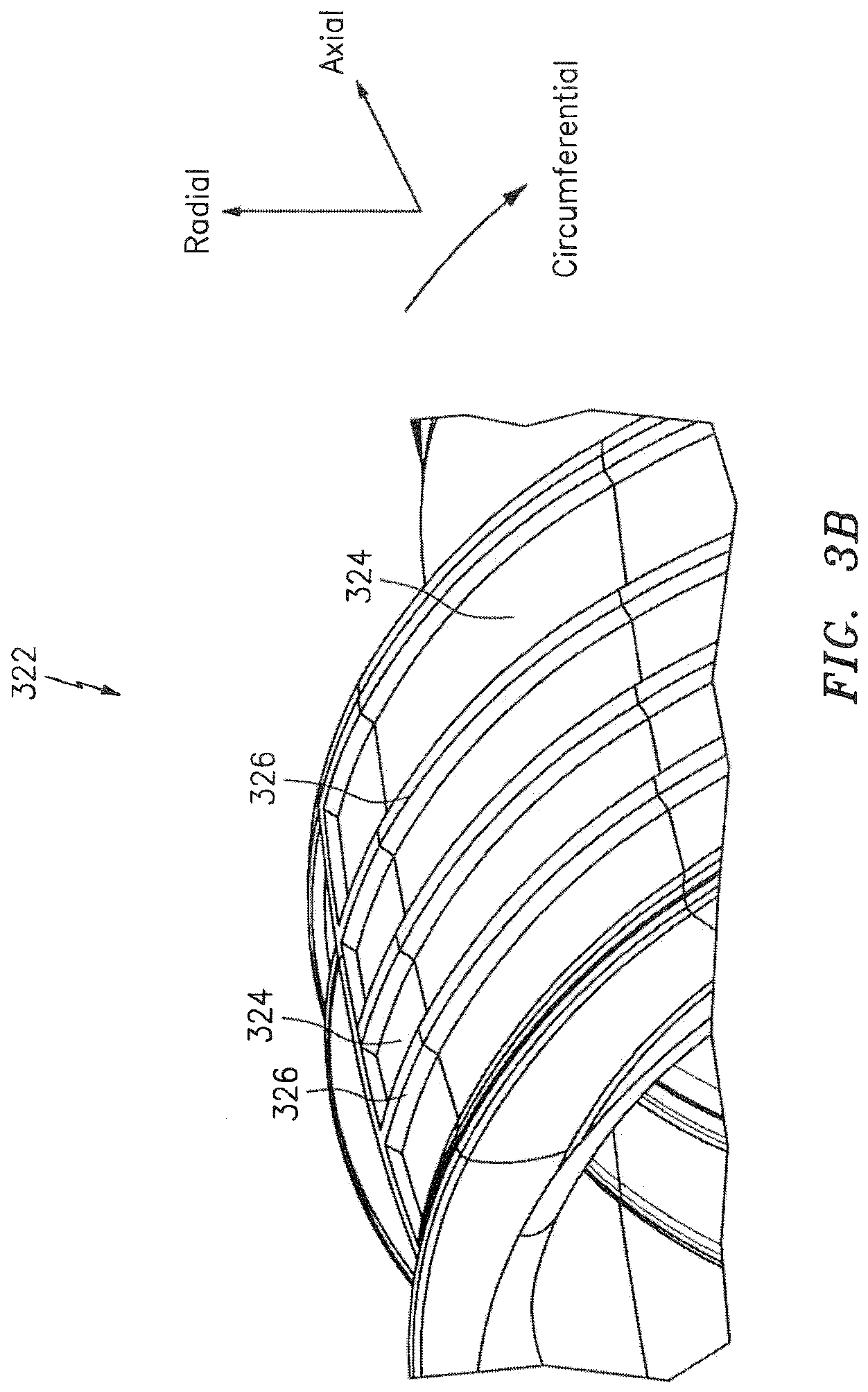 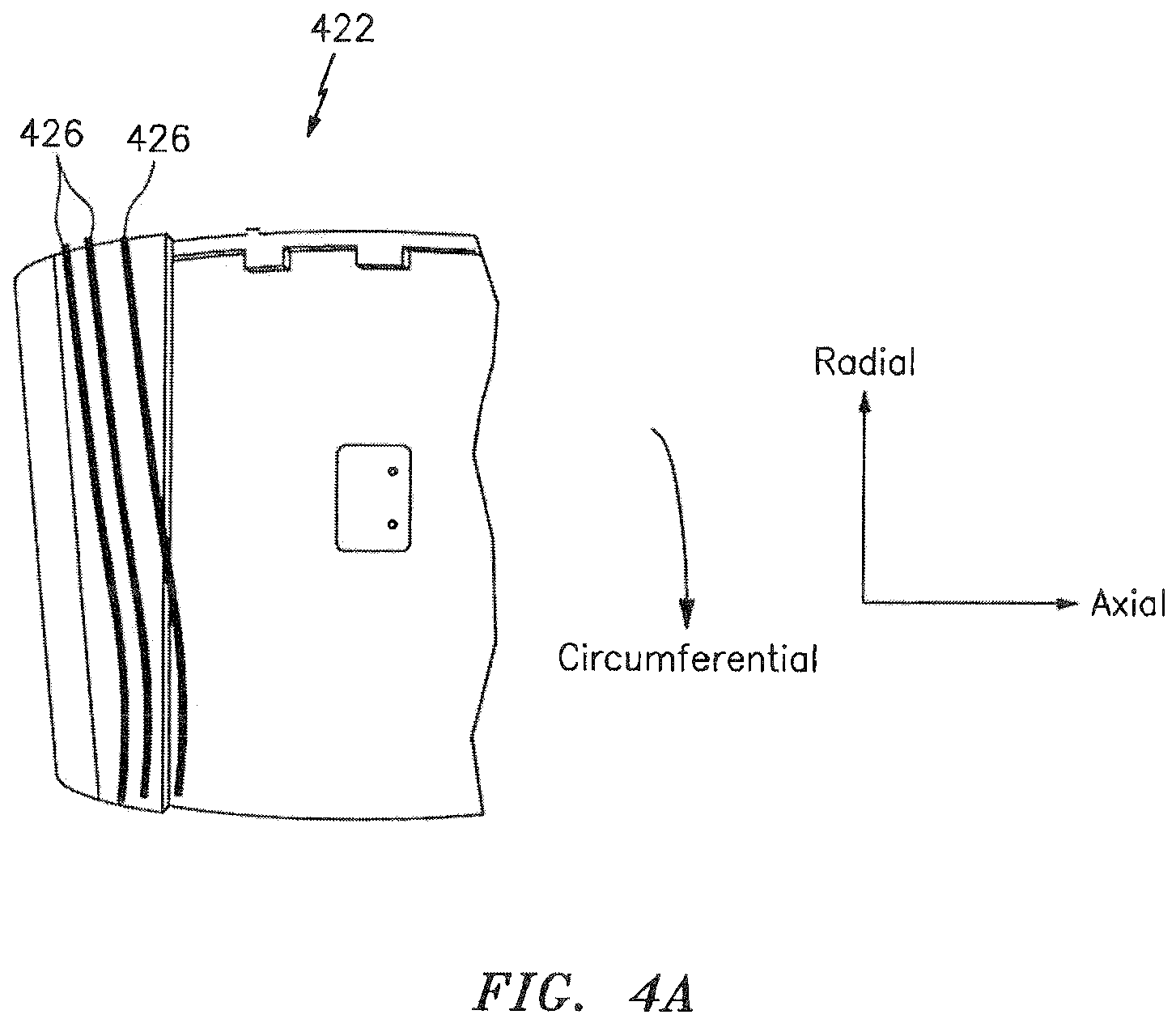 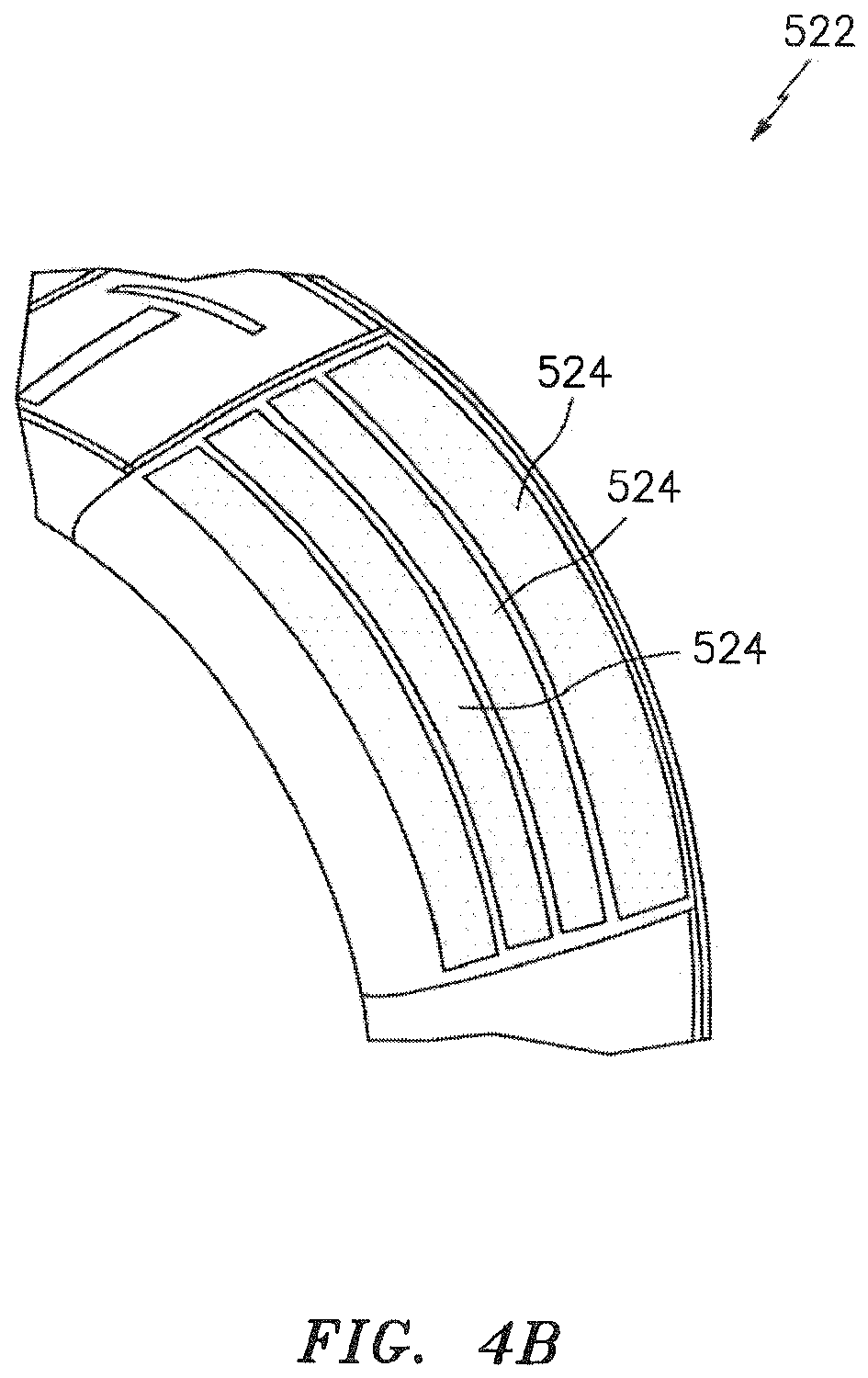