[0001] The present invention relates to a printing apparatus and a printing method for ejection of inks from a nozzle using acoustic forces. One of the technical advantages is that inks of any type and temperature may be printed, which alleviates severe limitations of the current state of the art.
[0002] To date, the largest technological limitation in planar and 3D-printing is the ability to dispense materials over a wide range of physical properties, as described by B. Berman, Bus Horizons 55 (2012).
[0003] Today, the technologies of choice for the printing of multiple inks are limited to extrusion and inkjet processes (S. Upcraft, and R. Fletcher, Assembly Autom 23 (2003); A. Jaworek, and A. Krupa, Journal of Aerosol Science 30 (1999)).
[0004] The extrusion process "pushes" a very viscous ink through a small nozzle, very similarly to a toothpaste, while the inkjet process relies on a dynamic ejection principle based on strong pressure wave within the nozzle, generated usually by a piezoelectric device (B. Derby, Annual Review of Materials Research, Vol 40 40 (2010)).
[0005] However, to-date-printing technologies are limited and require cumbersome ink preparation to achieve a degree of functionality. In extrusion printing, the push (pressure) required to eject relatively small features becomes so large that is not practically possible to eject the ink. As a result, it works either with high temperature - to reduce the viscosity of the material at ejection as described by S. Upcraft, and R. Fletcher, Assembly Autom 23 (2003) - or with specific non-Newtonian fluids that exhibit a shear-shinning behavior (e.g., thixotropy, the higher the stress they experience the lower their viscosity) which is described by K. Sun et al., Adv Mater 25 (2013)).
[0006] On the other hand, inkjet technology is powerful and it is integrated in today's society (i.e., the inkjet printer). However, this inkjet drop-on-demand (DOD) technology is severely limited to fluids with viscosity approximately 10 times that of water (B. Derby, Annual Review of Materials Research, Vol 40 40 (2010)).
[0007] From a physical point of view, the printing process can be characterized by a non-dimensional number, the Ohnesorge number Oh, and its inverse Z = Oh-1,

[0069] References in the specification to a given example indicate that the example described may include a particular feature, structure, or characteristic, but every example may not necessarily include the particular feature, structure, or characteristic. It should be noted that the description and drawings/figures merely illustrate the principles of the proposed apparatus and method. It will thus be appreciated that those skilled in the art will be able to devise various combinations and the like that are not explicitly described or shown herein. Furthermore, all examples recited herein are principally intended expressly to be only for pedagogical purposes to aid the reader in understanding the principles of the proposed method and apparatus and the concepts contributed by the inventors to furthering the art, and are to be construed as being without limitation to such specifically recited examples and conditions. Moreover, all statements herein reciting principles, aspects, and embodiments, as well as specific examples thereof, are intended to encompass equivalents thereof.
[0070] Figures 2a and 2b show conventional configurations of a standing wave levitator, which are used for trapping particles or fluids at a location of an acoustic node between an emitter 1 and a reflector 2. The emitter 1 generates an acoustic field 3 of sound waves, which apply an acoustic force 3a (radiation pressure) on objects, which are positioned within the acoustic field 3. In the typical configuration of a standing wave levitator, as depicted in Figs. 2a and 2b, a (detached) droplet 10 is trapped at the location of the acoustic node (see Fig. 2a). An ejection of the trapped droplet 10 with the conventional standing wave levitator is very difficult.
[0071] The here-described printing apparatus and the printing method make use of the same physical principle as the conventional standing wave levitator, however, different to the standing wave levitator, allow ejecting droplets, in particular, from a nozzle.
[0072] The physical principle of levitating objects by acoustic forces will be briefly described: sound waves apply forces on objects. The acoustic forces 3a, 8a, which are used in connection with the here described printing apparatus and printing method, in particular, arise from radiation pressure. Radiation pressure is a nonlinear effect of the acoustic field 3 (E. H. Brandt, Nature 413 (2001)). Based on wave scattering, acoustic forces are practically material independent, in particular when handling samples in air (D. Foresti, and D. Poulikakos, Physical Review Letters (2014)). Albeit radiation pressure is usually relatively weak, it can levitate, e.g. in open air, objects as heavy as steel marbles. The levitation can be achieved, e.g., when properly focusing the radiation pressure (N. Bjelobrk et al., Appl Phys Lett 97 (2010); D. Foresti et al., Sci Rep-UK 3 (2013)). To describe modulation of such acoustic forces 3a, 8a in time and space that can facilitate transport of matter, the term acoustophoresis is used (D. Foresti et al., P Natl Acad Sci USA 110 (2013)).
[0073] The enhancement of such forces 3a, 8a is typically, but not necessarily, achieved by generating an acoustic standing wave, established between an emitter 1 and a reflector 2 (see Fig 2a; and D. Foresti, M. Nabavi, and D. Poulikakos, Journal of Fluid Mechanics 709 (2012)). The resonant condition suggests the distance H between an oscillating source and a reflective surface to be about a multiple of half of the wavelength λ. When H ≈ λ/2, a pressure node is generated in the middle of the levitator. Below the node the acoustic forces 3a, 8a oppose the gravitational force, and vice versa above the node (Fig. 2a). Acoustic levitation is indeed intrinsically stable.
[0074] When a drop 10 of radius Rs is introduced in the system, as it is exemplarily shown in Fig. 2b, wherein the drop 10 is pendant from a nozzle 6 of diameter d, the drop 10 experiences a force that is the sum of the capillary force Fc = πσd, the gravitational force Fg and the acoustic force Fa (Fig. 2b).
[0075] If Fc > Fg + Fa, the droplet 10 stays attached to the nozzle 6, otherwise the droplet 10 will detach. The acoustic force Fa scales with the volume of the drop/droplet 10 (being attached to the nozzle 6), hence Fa ∝ Rs3. Since the same scaling applies for the gravity force, an acoustic acceleration ga can be introduced, which is similar to the gravitational acceleration g, and the following relationship is obtained:

- an emitter (1) arranged within a first fluid and configured to oscillate for generating an acoustic field (3, 8) in said first fluid;

- a driving means (5) configured to drive a predetermined volume of the second fluid out of the nozzle (6),

the nozzle tip (6a) is positioned within the reflectorless chamber (7), and
the acoustic field (3, 8) has a force gradient of acoustic forces for detaching the predetermined volume of the second fluid from the nozzle (6) which points into the direction of the printing substrate (11).

4. The printing apparatus according to at least one of the previous claims, characterized in that the predetermined position of the nozzle tip (6a) is at a point or in the vicinity of a net force that pulls at a droplet pendant at the nozzle tip.

6. The printing apparatus according to at least one of the previous claims, characterized in that a plurality of nozzles (6) and/or reflectorless chambers (7) are arrayed for forming a multi-nozzle print head.

7. The printing apparatus according to at least one of the previous claims, characterized in that the nozzle (6) has a heating means and/or a cooling means for heating/cooling the second fluid to a predetermined temperature.

8. The printing apparatus according to at least one of the previous claims, characterized in that a print head, which can be the emitter (1) or the reflector (2), comprises a plurality of reflectorless chambers (7).

10. The printing apparatus according to at least one of the previous claims, characterized in that the predetermined volume ranges from nl to µl.

11. The printing apparatus according to at least one of the previous claims, characterized in that the emitter (1) is configured to oscillate with a frequency of 1Hz to 1GHz.

13. Method for ejecting a second fluid from a nozzle (6) which is arranged within a first fluid with the printing apparatus according at least one of the previous claims, comprising the step of 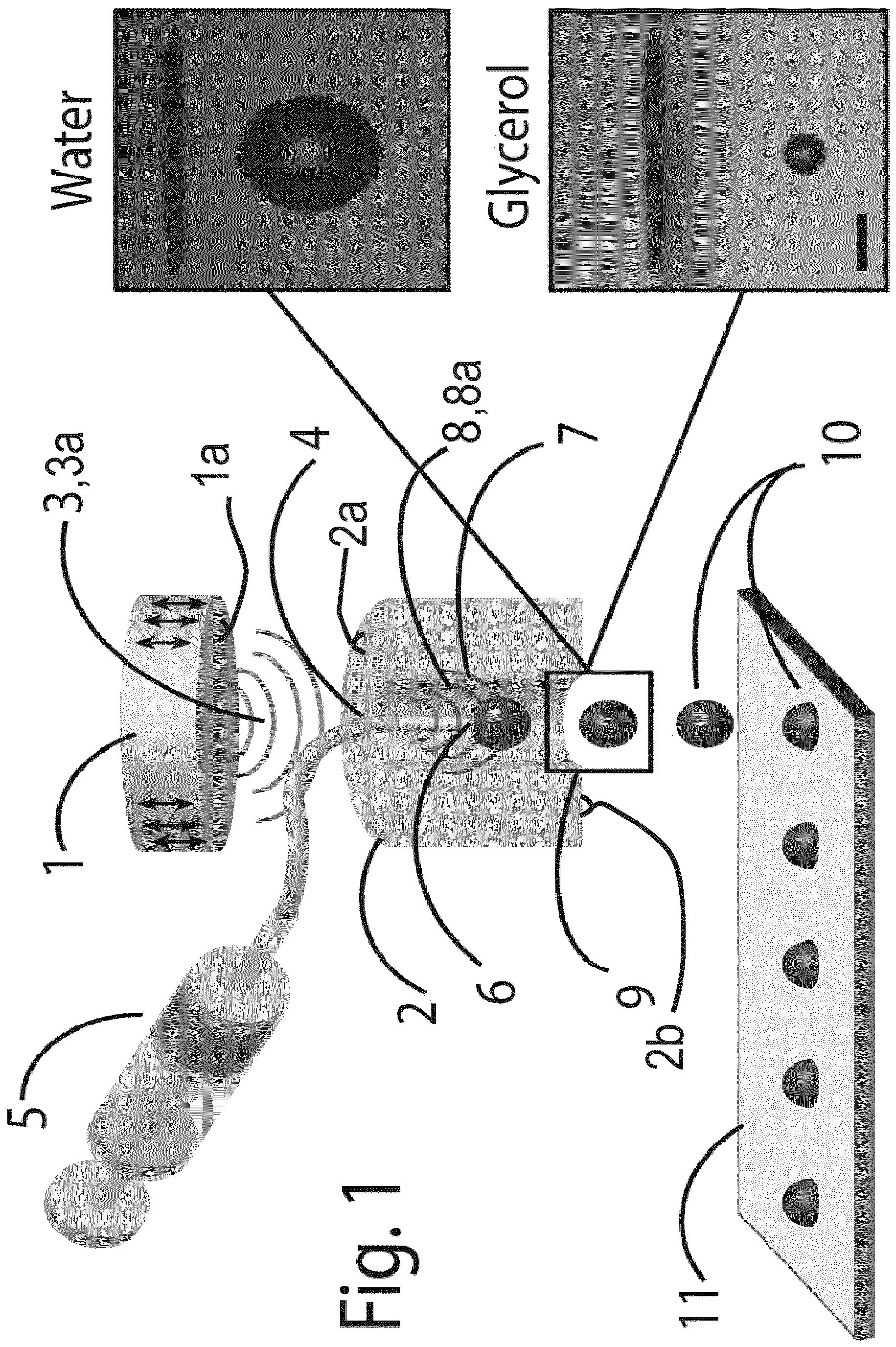 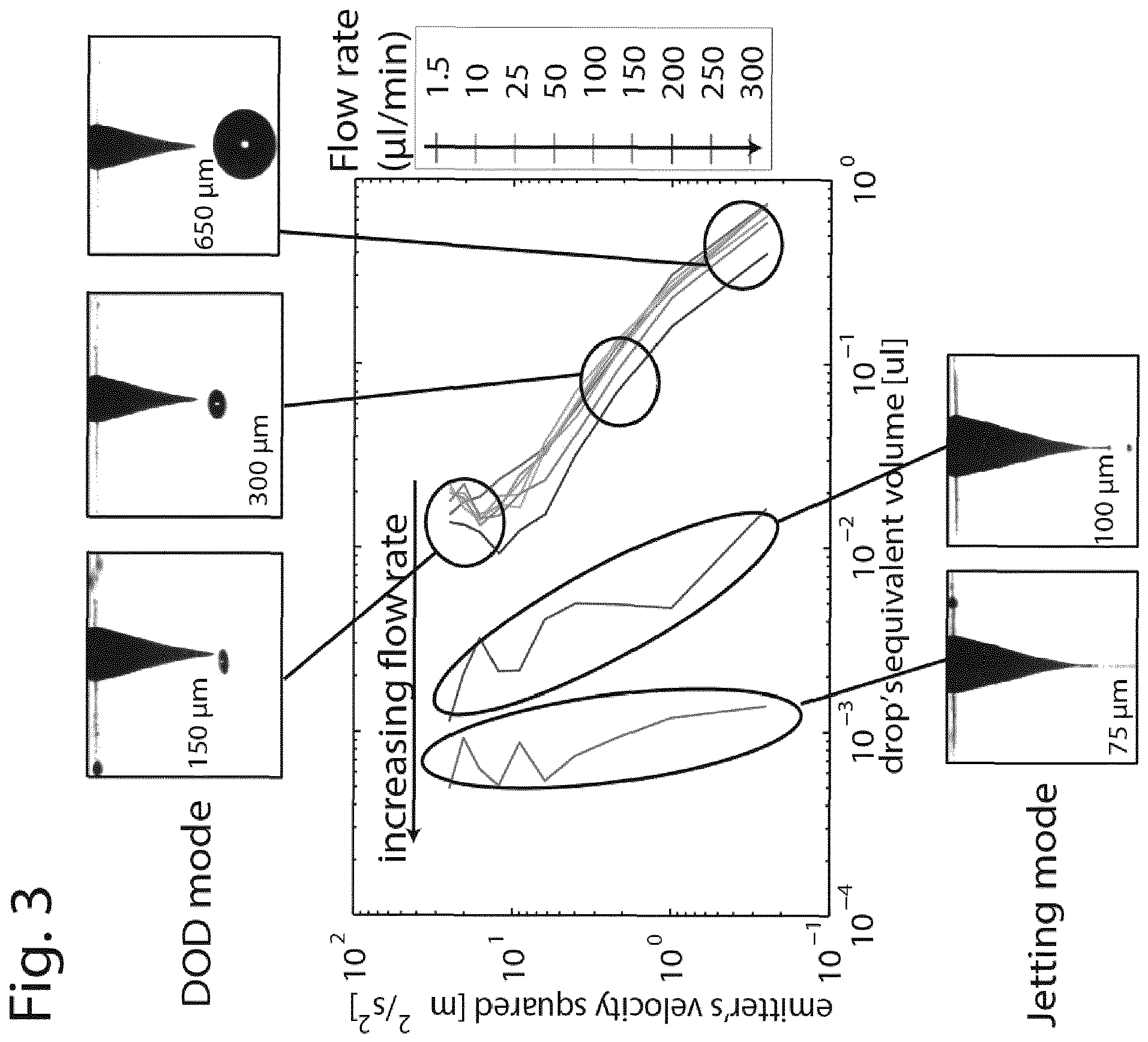 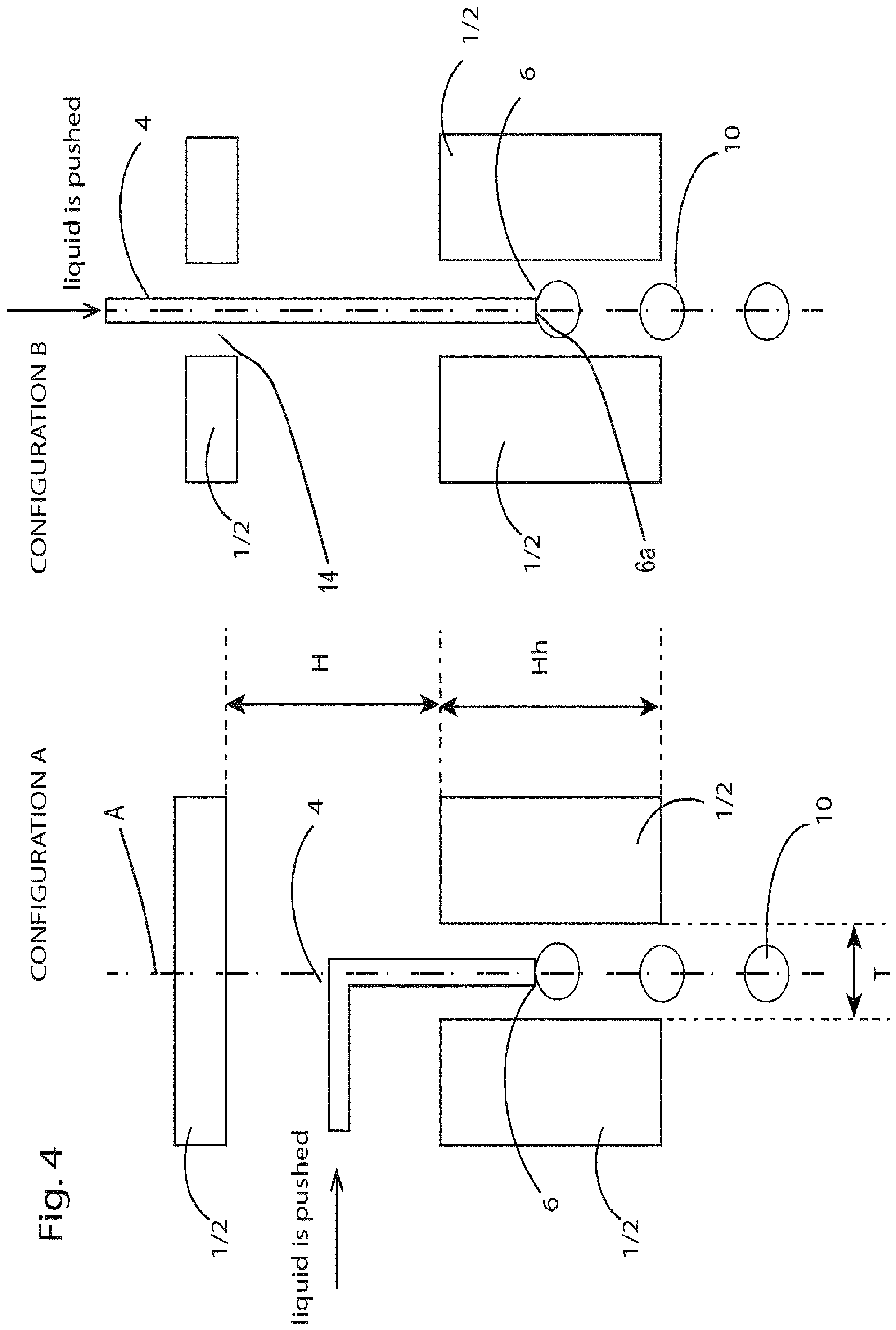 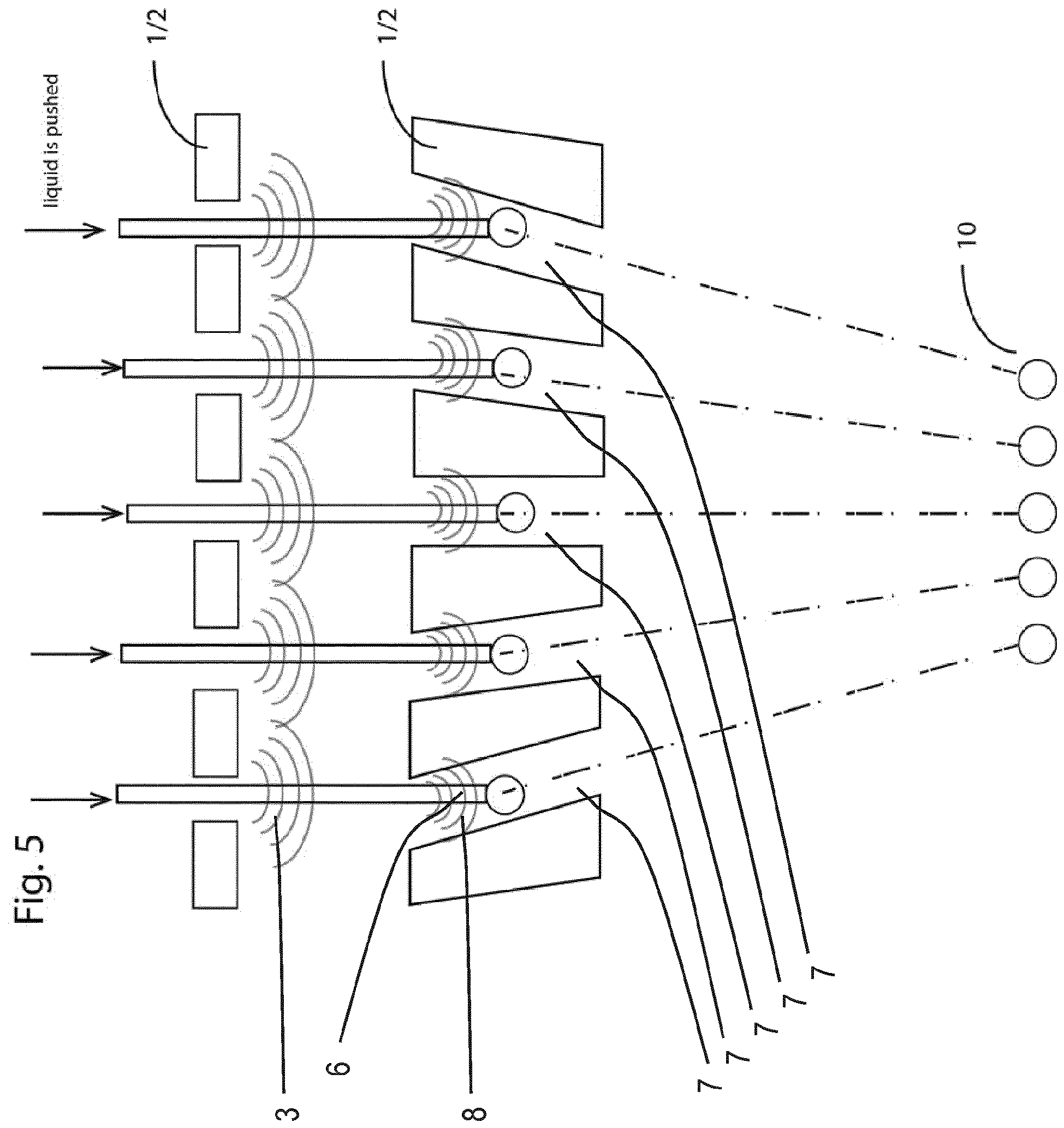 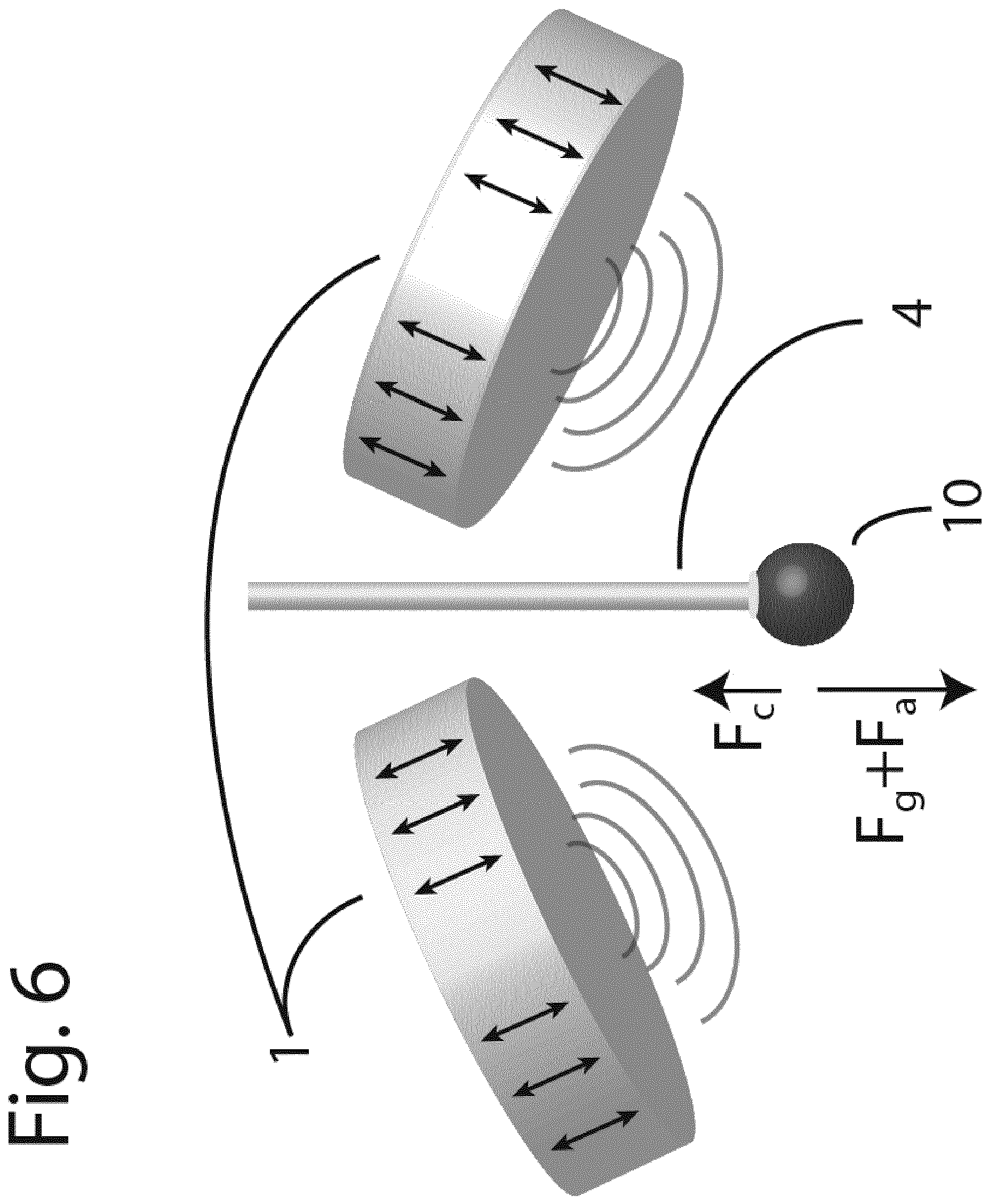 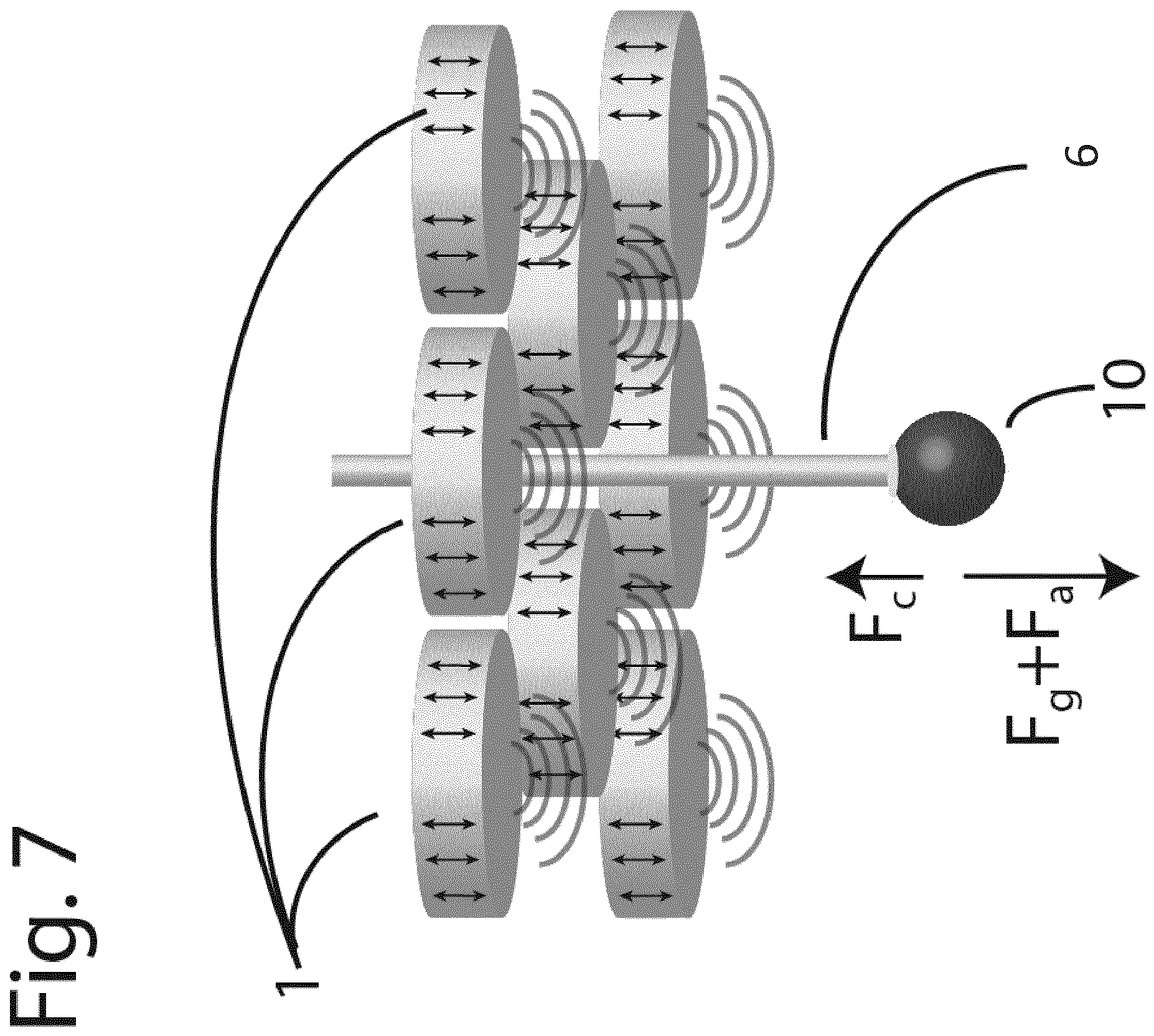 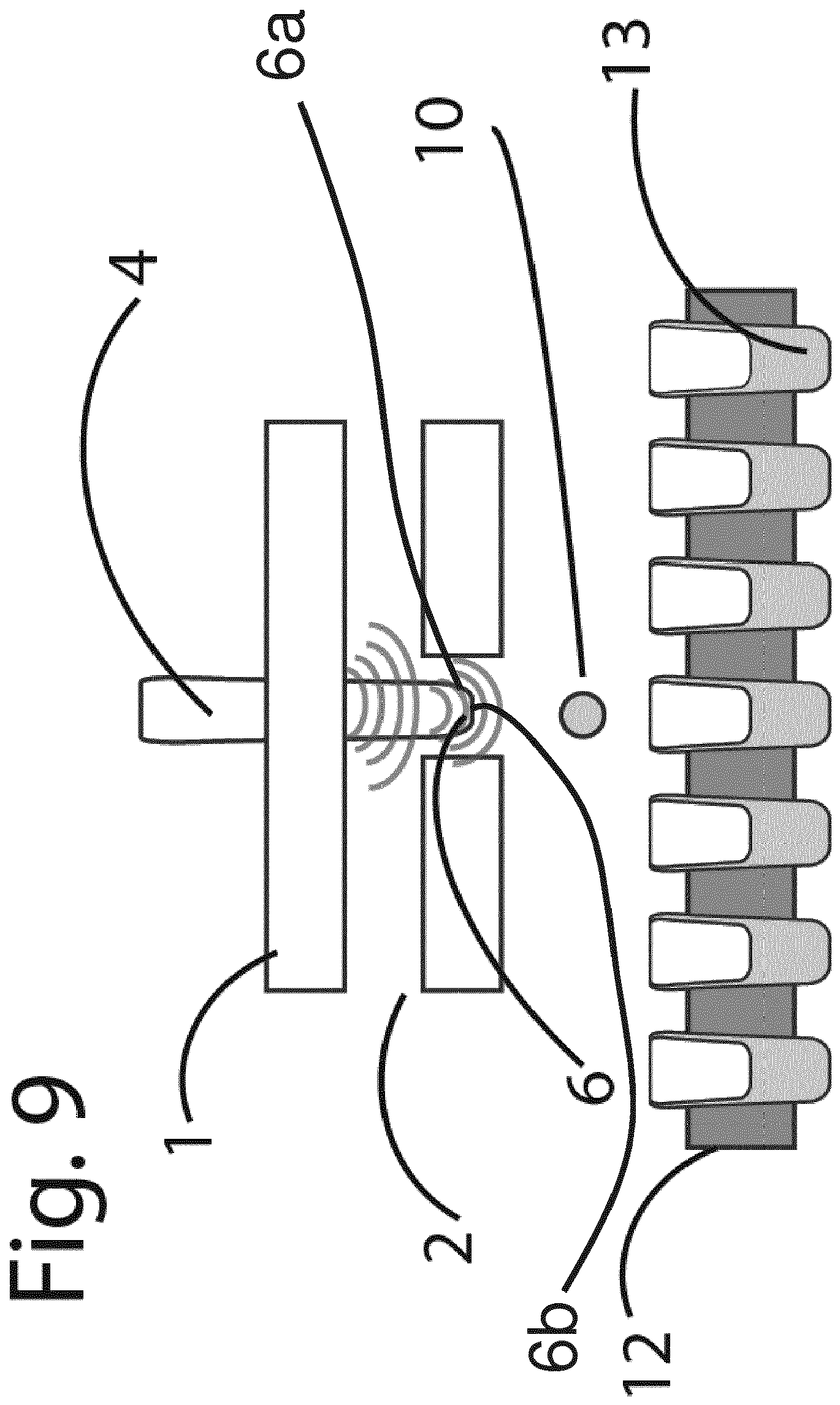 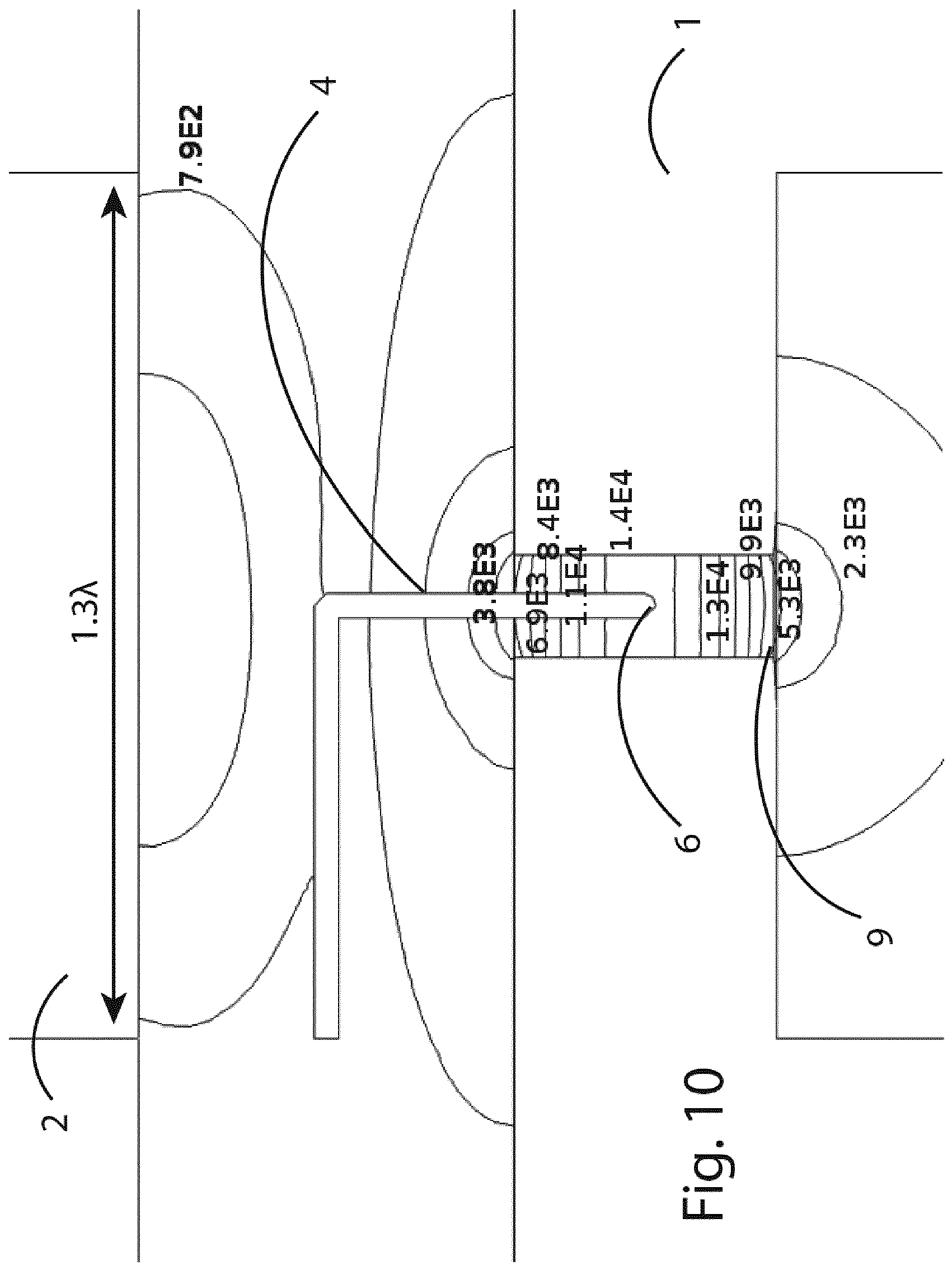