[0001] This application relates to waterborne polymer dispersions having utility as heat seal coatings having good moisture resistance for food packaging and related uses. A first polymer which has a low minimum film formation temperature is an acrylic emulsion polymerized copolymer and forms good coherent films with room temperature drying. A second polymer is an ethylene-vinyl acetate dispersion that provides blocking resistance of an adhesive coated lidding material at shipping and storage temperatures and possibly enhanced wetting at the heat seal temperature of 66-200 °C.

Abbreviations and Chemicals Used in Examples: 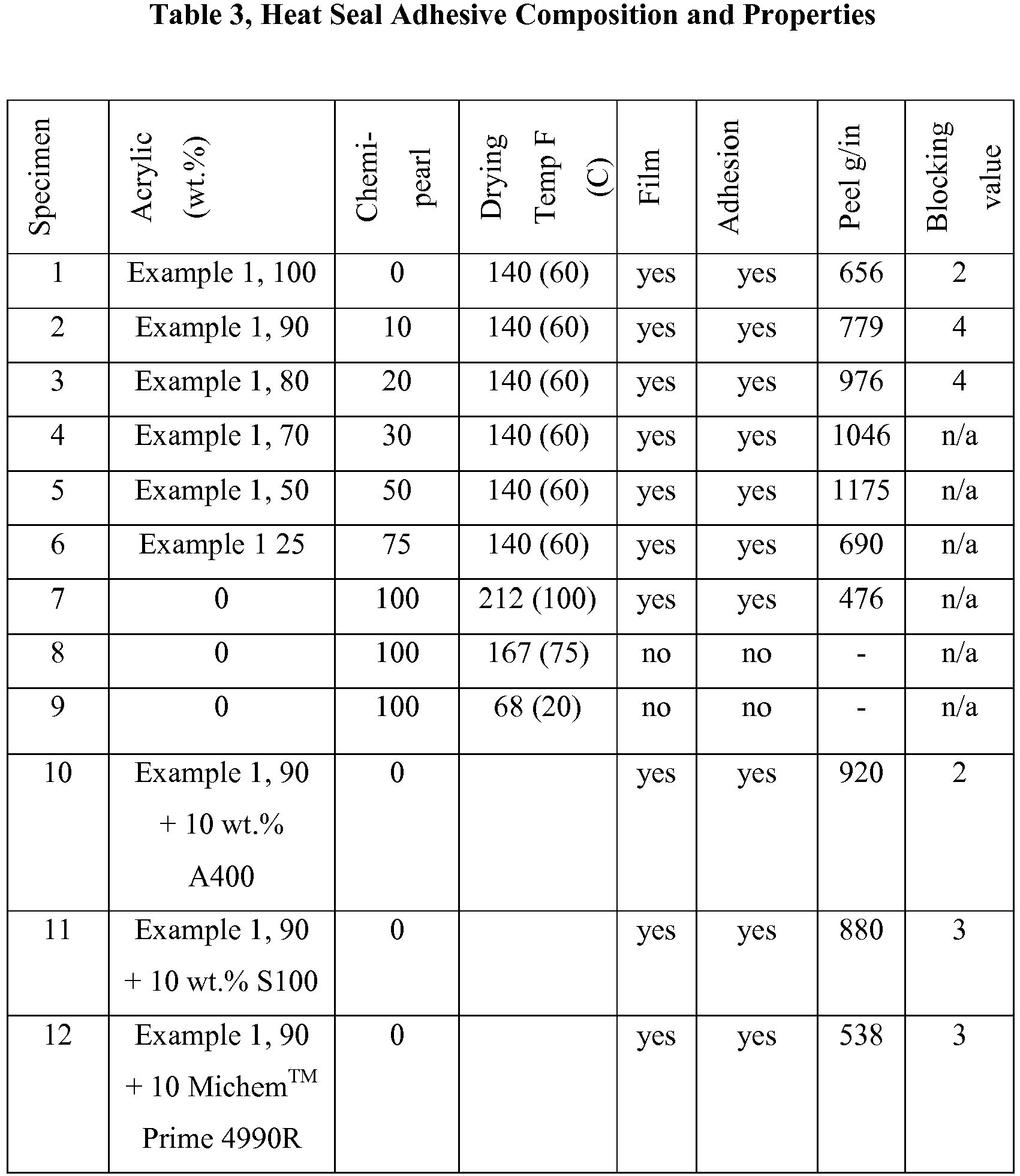 [0055] Blocking resistance is measured at 120 °F (48.9 °C) with the blocking face next to the back of the lidding material. Specimen 1 to 6 and 10-12 include up to 5 wt.% of a micronized straight chained hydrocarbon synthetic wax.
[0056] The following tests were used to evaluate the heat seal adhesive. The water based copolymer dispersion was applied as a film with a dry coating weight of 4.5 to 5.5 g/m2 and dried at 20-25 °C (air temperature) on a foiled polyester film for 24 hours/days or in a forced air oven at 75 °C for 5 minutes. For the blocking resistance testing, the specimen was mounted face to face or face to back and the specified pressure was applied for the specified time at the specified temperature. For the Heat Seal test, the specimen comprise the above heat seal adhesive dried onto a foiled polyester film in contact with sheets of high impact polystyrene (HIPS) that are meant to simulate the sealing surface of HIPS based containers.

3- Slight cling - can hear ticking and feel a slight resistance pulling them apart.

(a5) 0-20 wt.% of repeating units from other co-polymerizable monomers other than a1-a4 based on the weight of polymer A, wherein said acrylic emulsion copolymer further comprises 0.2-3 wt.% of N-methylol (meth)acrylamide repeating units, and

(b3) 0-5 wt.% repeating units from other co-monomers based on the weight of polymer B, and

said copolymers A and copolymer B being present in weight ratios of 95:5 to 40:60.

a) providing a lidding material which is a plastic layer, a metal foil, and/or a combination thereof or a laminate of metal and plastic in the form of a film,

b) combining an acrylic emulsion copolymer having a minimum film formation temperature below 25 °C with an ethylene-vinyl acetate copolymer dispersion having a minimum film formation temperature of greater than 60 °C and a volume average particle size diameter of between 3 and 15 micrometers, measured by dynamic light scattering, thereby forming a physical blend; and