[0002] Carbon dioxide gas, used in carbonated beverages, in food packaging, and in disinfection, is occasionally found, at the point of use, to be contaminated with compounds that can affect the taste, smell, and even the safety of the food or beverage product with which it is being used. The numerous, often localized, processes of manufacturing or acquiring carbon dioxide gas are often imperfect in their ability to generate fully pure carbon dioxide, and methods of cleaning or "scrubbing" the gas occasionally fail. Pure carbon dioxide can then become contaminated upon storage or transport, particularly if it is placed in previously contaminated containers.
[0003] Contaminated carbon dioxide can contain a wide range of contaminants, including acetaldehyde, sulfur compounds, aromatic hydrocarbons like benzene, and other volatile hydrocarbons like methane. Most contaminants, in moderate levels, only result in negative taste and smell impacts to the products using the carbon dioxide. In high levels some contaminants are toxic and can cause illness and even death. Benzene and a few others are, in moderate levels, believed to be carcinogenic.
[0004] The International Society of Beverage Technologists (ISBT), a beverage industry organization with over 1,000 corporate members, has developed guidelines for acceptable contamination levels in nonalcoholic beverages and soft drinks. These guidelines recommend maximum concentration levels for thirteen compounds or compound families including, for example, that acetaldehyde concentrations never exceed 200 parts-per-billion and that aromatic hydrocarbon concentrations never exceed 20 parts-per-billion.
[0005] However, the continuous or near-continuous monitoring of carbon dioxide in a production environment is currently very costly. Carbon dioxide analyzers on the market are built around chemical analysis equipment employing gas chromotography (GC) and mass spectroscopy (MS), more commonly found in laboratories. Carbon dioxide analyzer companies ruggedize these GC/MS units and augment them with peripheral electronic equipment to regulate sample flow and automate their measurement functions. These systems can easily cost $200,000 or more. They comprise one or more racks of equipment in an enclosure that can be five or six feet tall and weigh hundreds of pounds.
[0006] In addition to their high cost, current carbon dioxide analyzers are often touchy and expensive to maintain. Some require the use of "carrier" gases, including hydrogen, which is highly explosive. Carrier and "span" gases used in calibration can routinely cost $6,000 per year. The units typically sample the carbon dioxide flow at a rate of once every ten to twenty minutes, which may not be fast enough to catch fast contaminant transients, or eliminate all chance of product contamination.
[0007] Therefore, there is a need for a compact, robust, and inexpensive monitor that can make accurate and near-real-time measurements, thus dramatically reducing cost while enabling carbon dioxide producers and users to better assess and reduce contamination risk.
[0008] US 2007/0031302 A1 discloses a method and apparatus for purifying carbon dioxide, comprising an analysis skid with one or more detectors for the analysis of various impurities such as sulfur compounds, aromatics, hydrocarbons or oxygenates. The detectors may comprise a flame ionization detector, a photoionization detector, a flame photometric detector or sulfur chemiluminescence detector.
[0009] In Proc. SPIE 1796, Chemical, Biochemical, and Environmental Fiber Sensors IV (30 April 1993), Ingenhoff et al. present a spectral interferometric sensor for gases and liquids based on two waveguide arms of an integrated optical Mach-Zehnder-interferometer, wherein one of the arms is covered with a thin layer of polysiloxane which is sensitive to hydrocarbons.
[0010] US 2004/0239944 A1 states an interferometric substance detection sensor based on optical waveguides. The substances to be detected may comprise toxic chemical substances such as dioxin, or pathogenic germs. The disclosed device also comprises a flow controller to switch from a reference sample, e.g. pure water, to the sample from the environment under test.
[0011] Also US 2002/0016005 A1 and US 2012/0214707 A1 disclose devices and methods for detecting analytes in a sample, based on integrated optical interferometers.

Fig. 1 is a schematic view of a carbon dioxide monitoring system utilizing a real-time sensor according to an aspect.

Fig. 3 is a schematic representation of the subsystems of the carbon dioxide monitoring system of Fig. 1.

Fig. 4 is a schematic representation of the carbon dioxide monitoring system of Fig. 3.

Fig. 5 is a cross-sectional side schematic view of the chemical sensor module of the carbon dioxide monitoring system according to one embodiment of the present invention.

Fig. 6a is a top view of a waveguide with four separate channel pairs.

Fig. 6b. is a schematic representation of a single mode waveguide with buried evanescent field according to an aspect.

Fig. 7 is a flow diagram of a method performed by a carbon dioxide monitoring system according to an aspect of the present invention.

Figs. 8-10 are representations of the display of the real-time contaminant sensor of Fig. 1.

Figs. 11-12 are flow diagrams of methods performed by a carbon dioxide monitoring system according to an aspect of the present invention.

Fig. 13 is a block diagram of a control electronics system according to an aspect of the present invention.

Detailed Description of the Preferred Embodiments

a contaminant sensor module (200) comprising an interferometer configured to create an interference pattern based on the presence of contaminants;

a source of carbon dioxide;

an unfiltered path (114) in communication with the carbon dioxide intake port which bypasses the contaminant filter,

a gas controller module to control the flow of carbon dioxide gas from the delivery system.

4. The carbon dioxide contaminant monitoring system of claim 3, wherein the at least one sense channel has a cladding layer with a chemically sensitive polymer configured to change index of refraction based on the presence of a contaminant.

5. The carbon dioxide contaminant monitoring system of claim 4, wherein the at least one reference channel is covered so as not to induce a phase shift in the presence of the contaminants to which the chemically sensitive polymer reacts.

a light source directed into the interferometer;

a gas source supplying a representative flow of gas to the interferometer;

a system controller (300) connected to the camera configured to detect changes in the interference pattern.

10. The carbon dioxide contaminant monitoring system of claim 9, further comprising a flow cell (220) having a gas inlet port and a gas exhaust port, wherein the flow cell directs the gas over the first and second optical paths.

12. The carbon dioxide contaminant monitoring system of claim 9, wherein the light source is a laser; and/or
wherein the camera is a charge-coupled device; and/or
further comprising a particulate filter (140) connected to the gas inlet port; and/or
wherein the first optical path comprises a waveguide channel having a cladding layer with a chemically sensitive polymer.

13. A method of sensing contaminants in carbon dioxide gas, comprising:

combining the output of the first and second channels to create an interference pattern;

capturing the interference pattern with a camera; and

15. The method of sensing contaminants in carbon dioxide gas of claim 13, wherein the interferometer further comprises a waveguide (230) having the first and second channels wherein the first channel has a chemically sensitive polymer cladding layer. 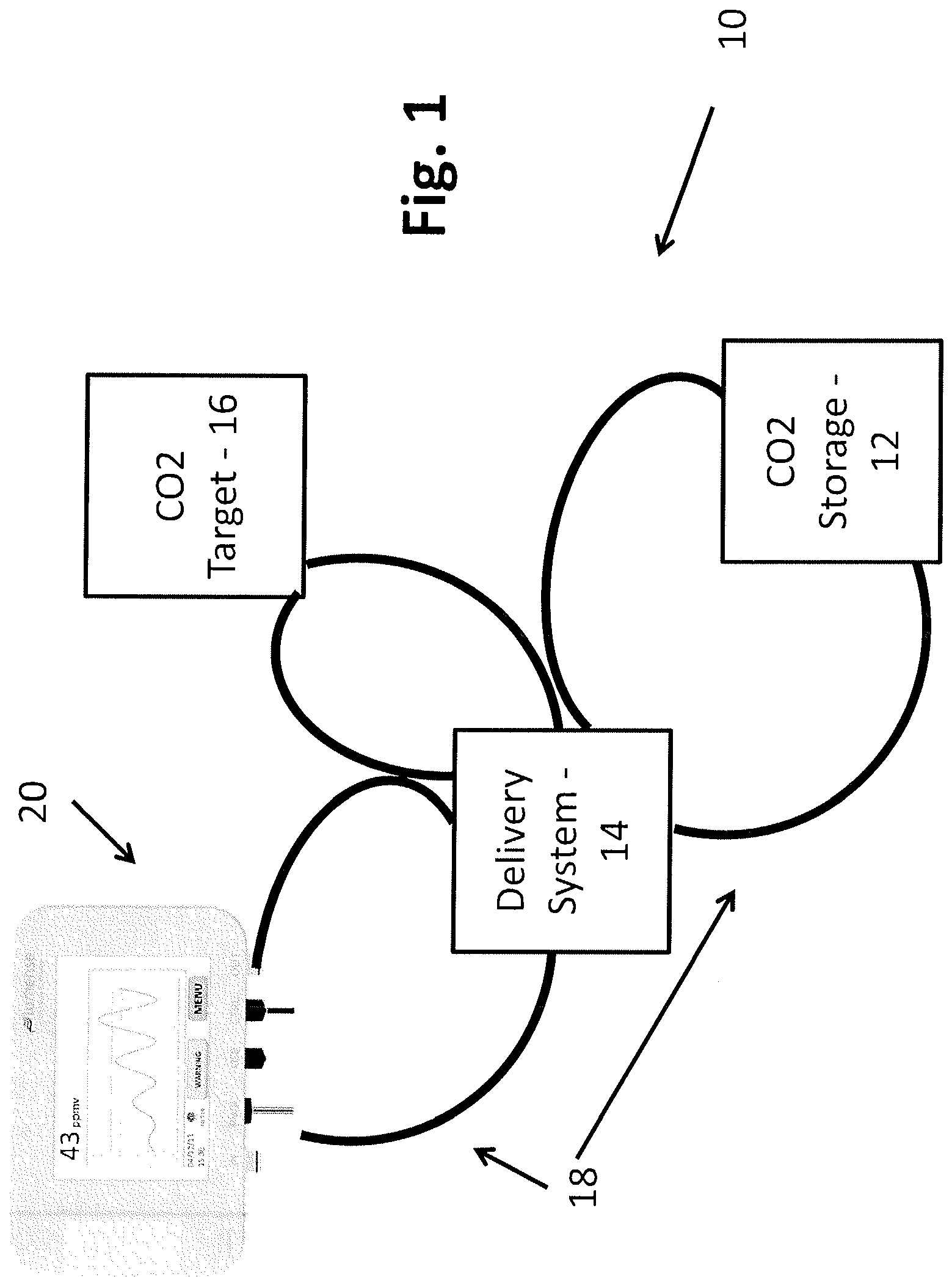 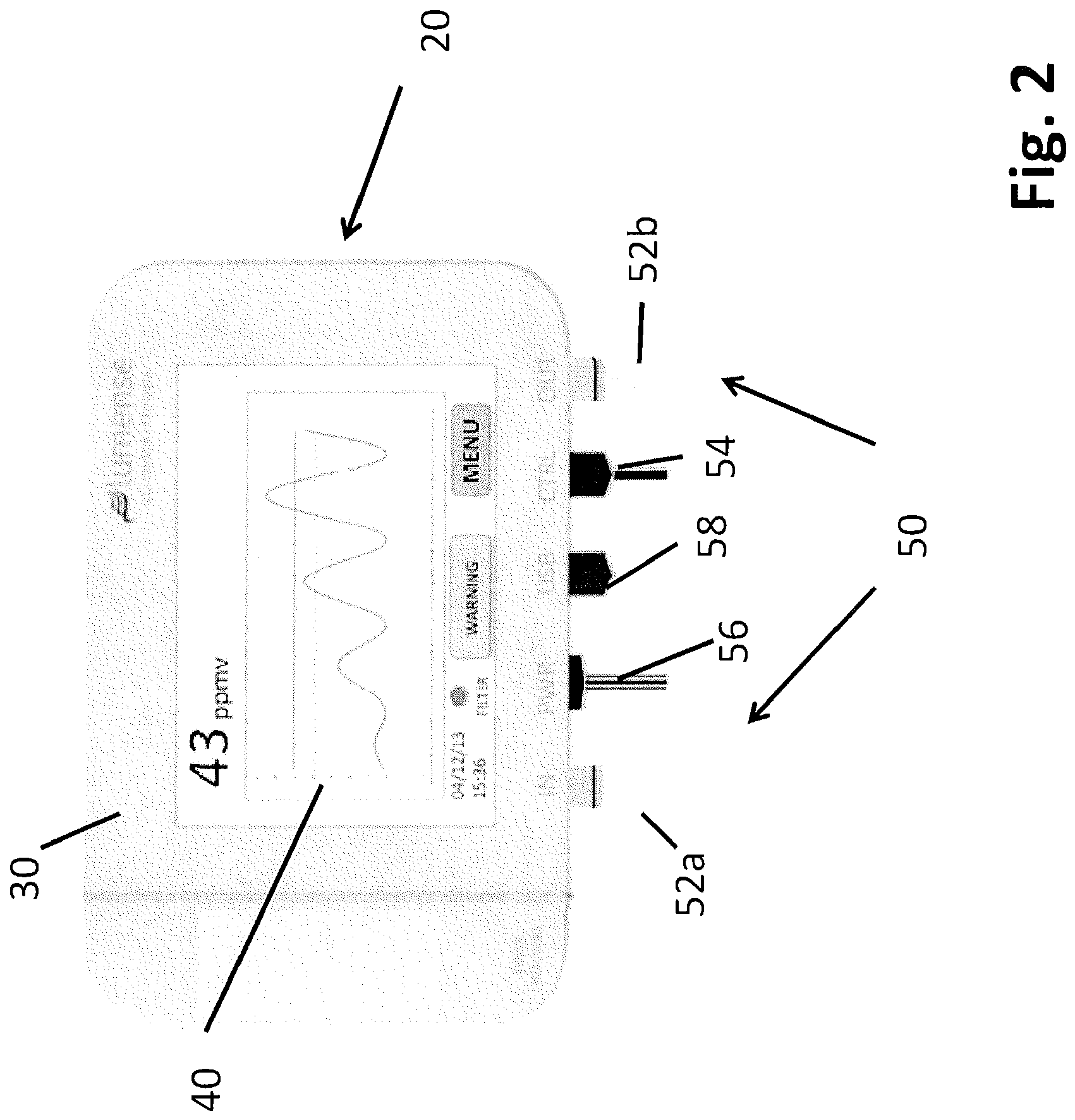 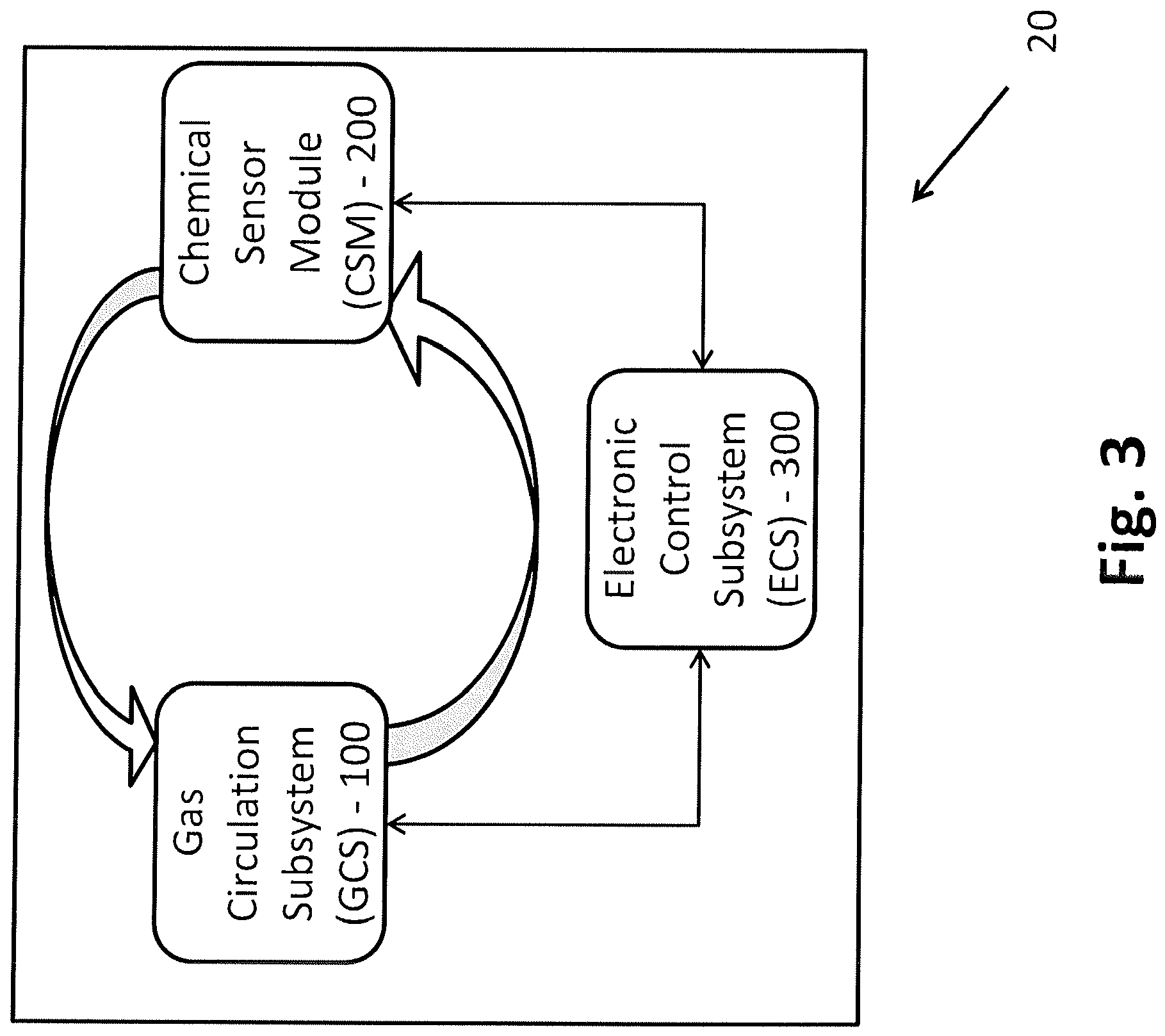 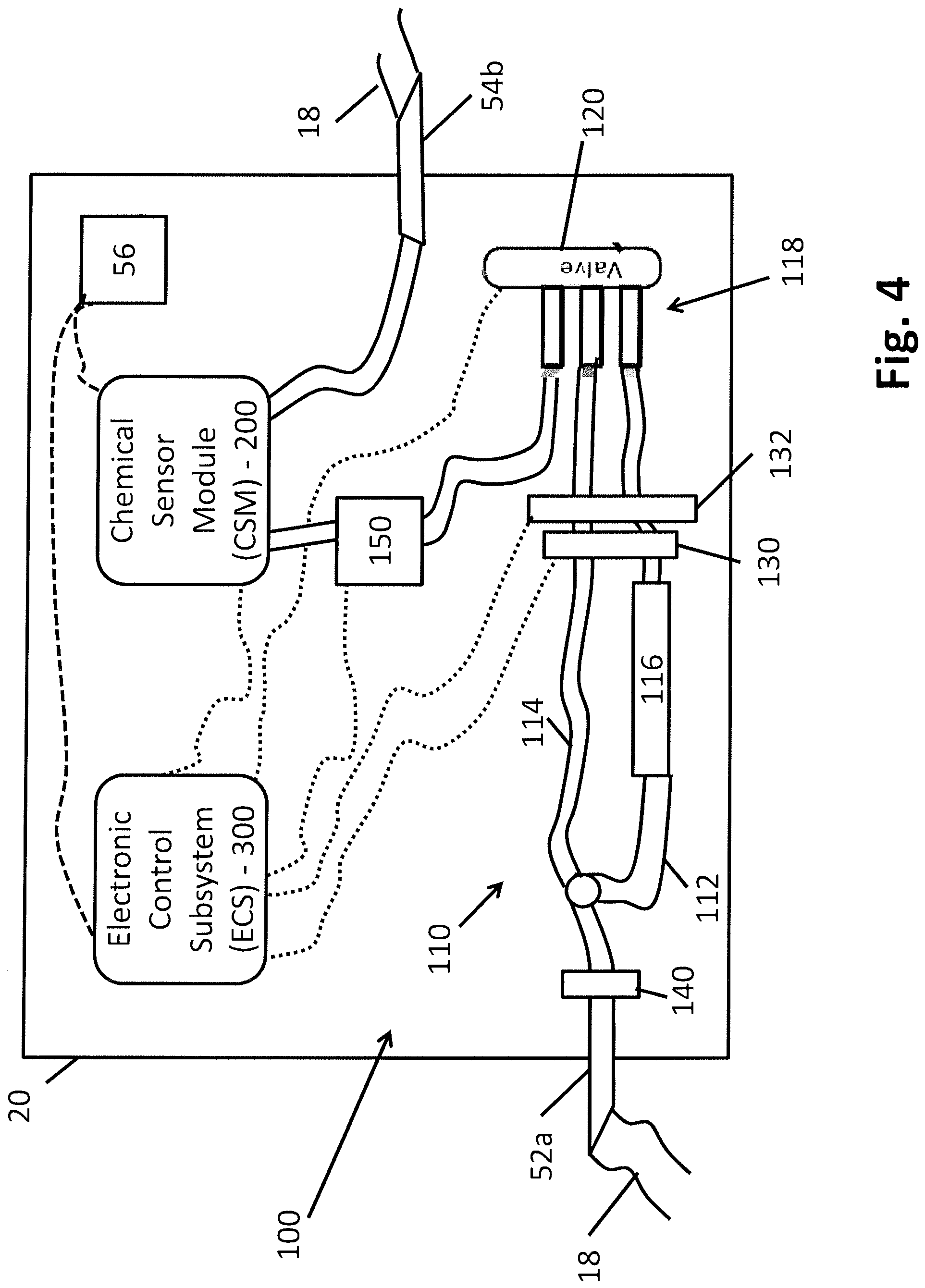 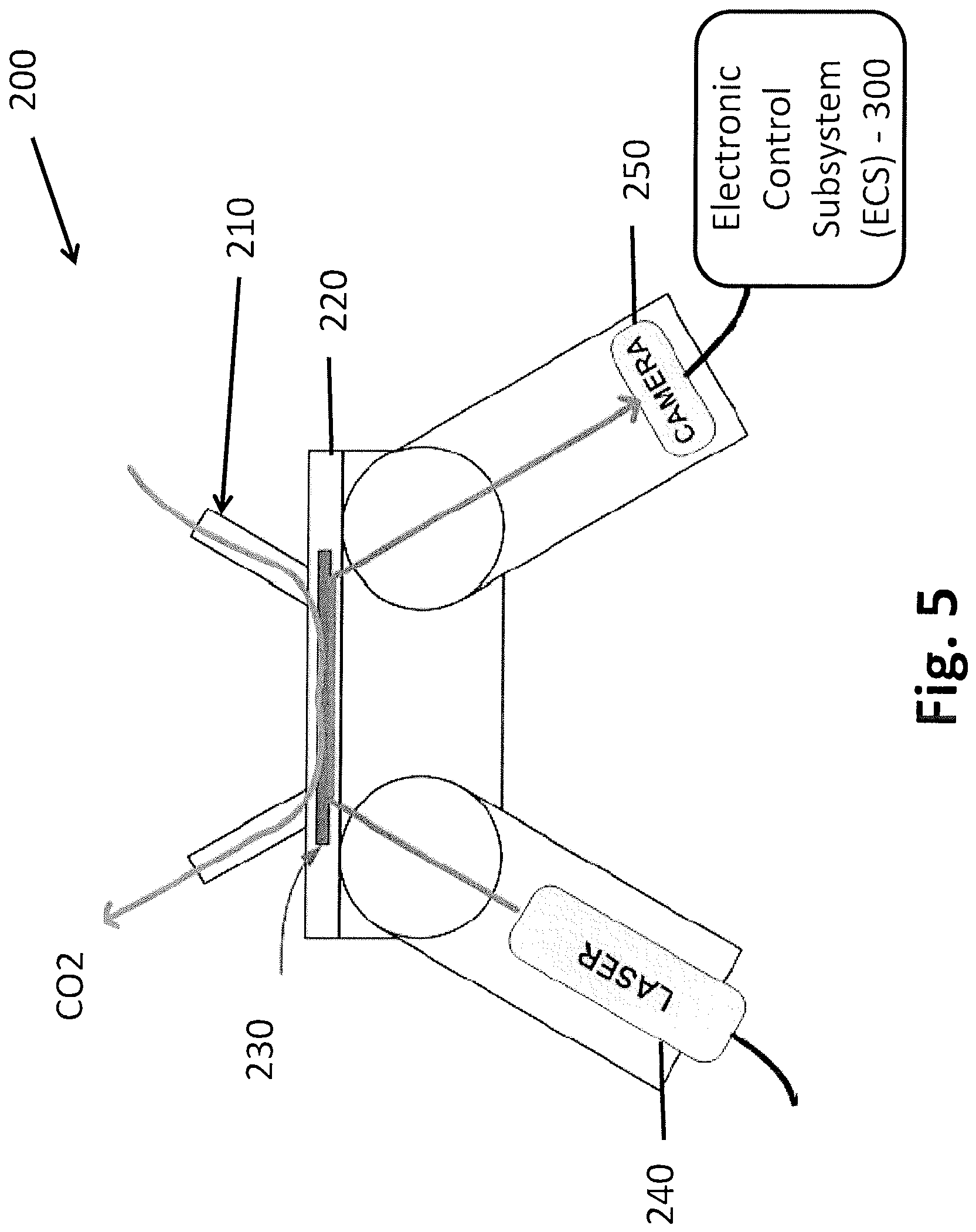 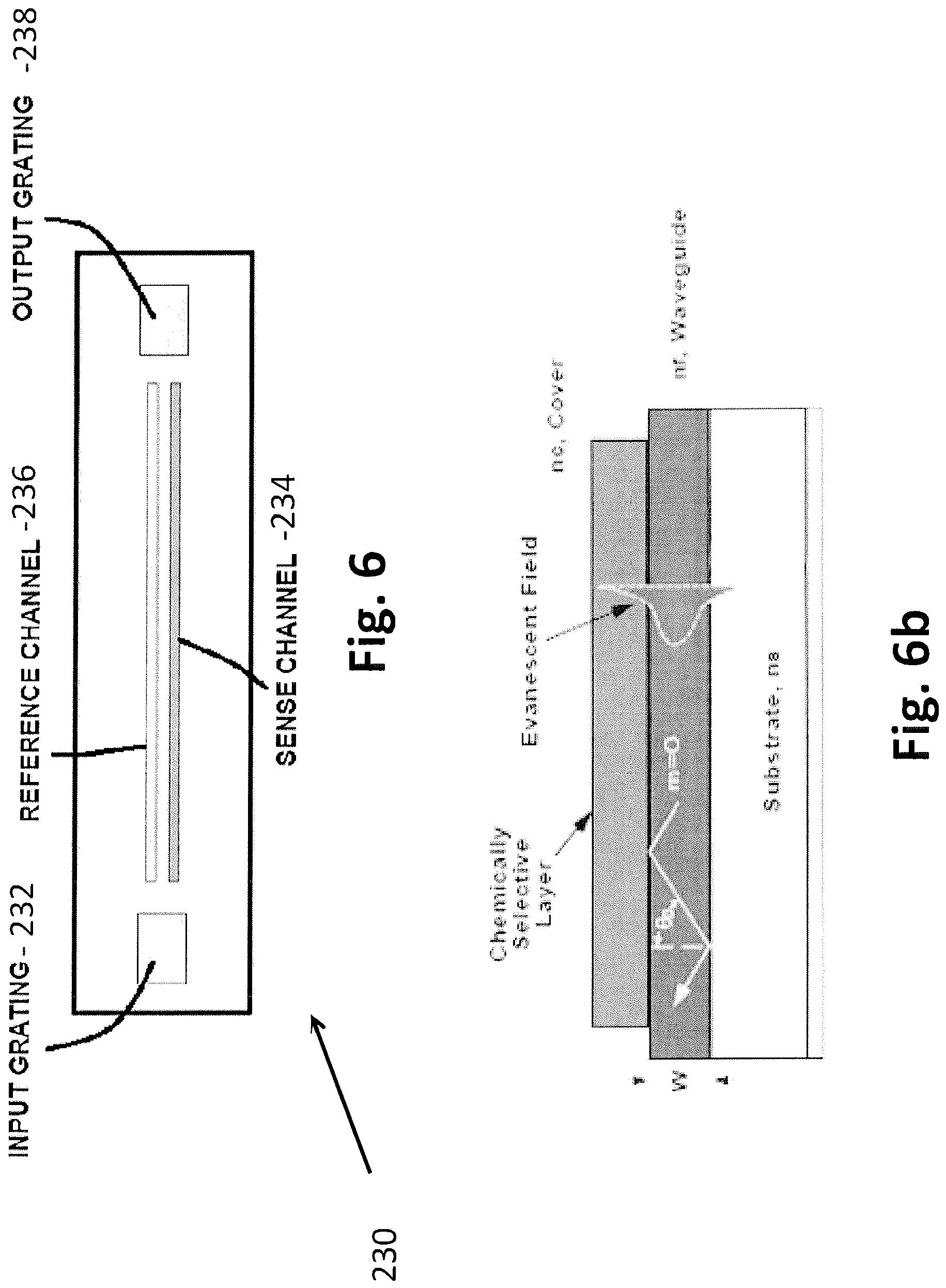 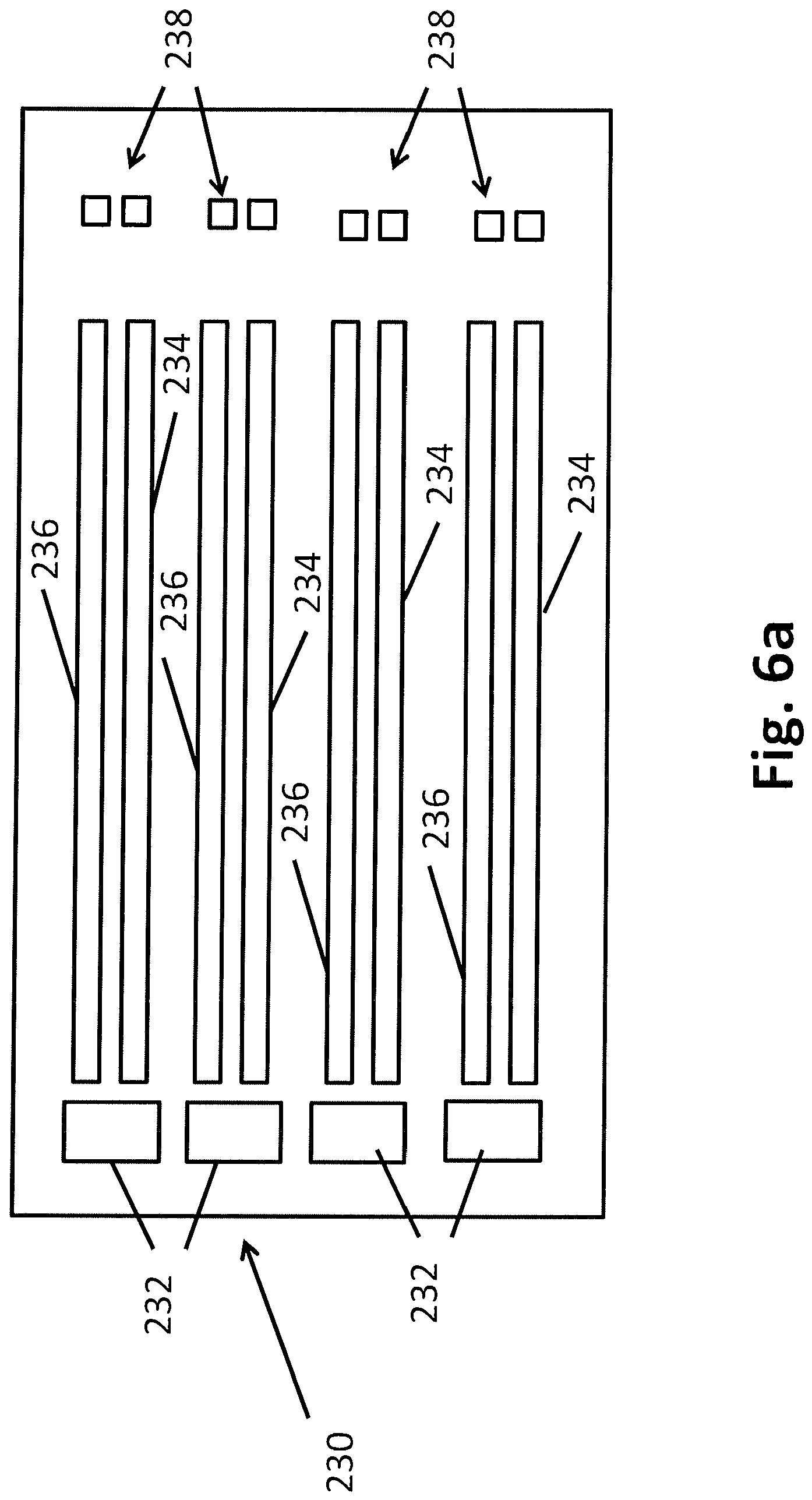 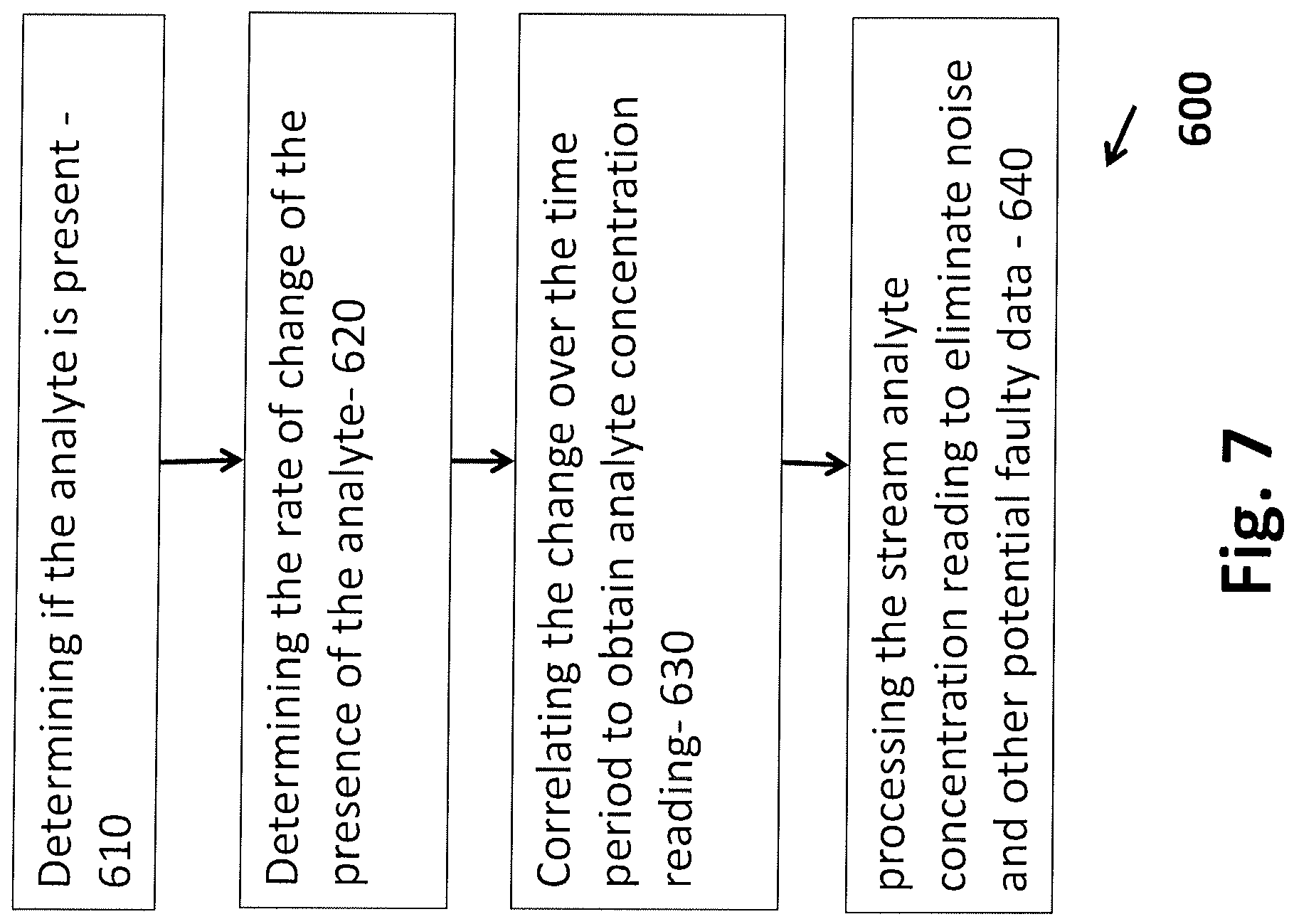 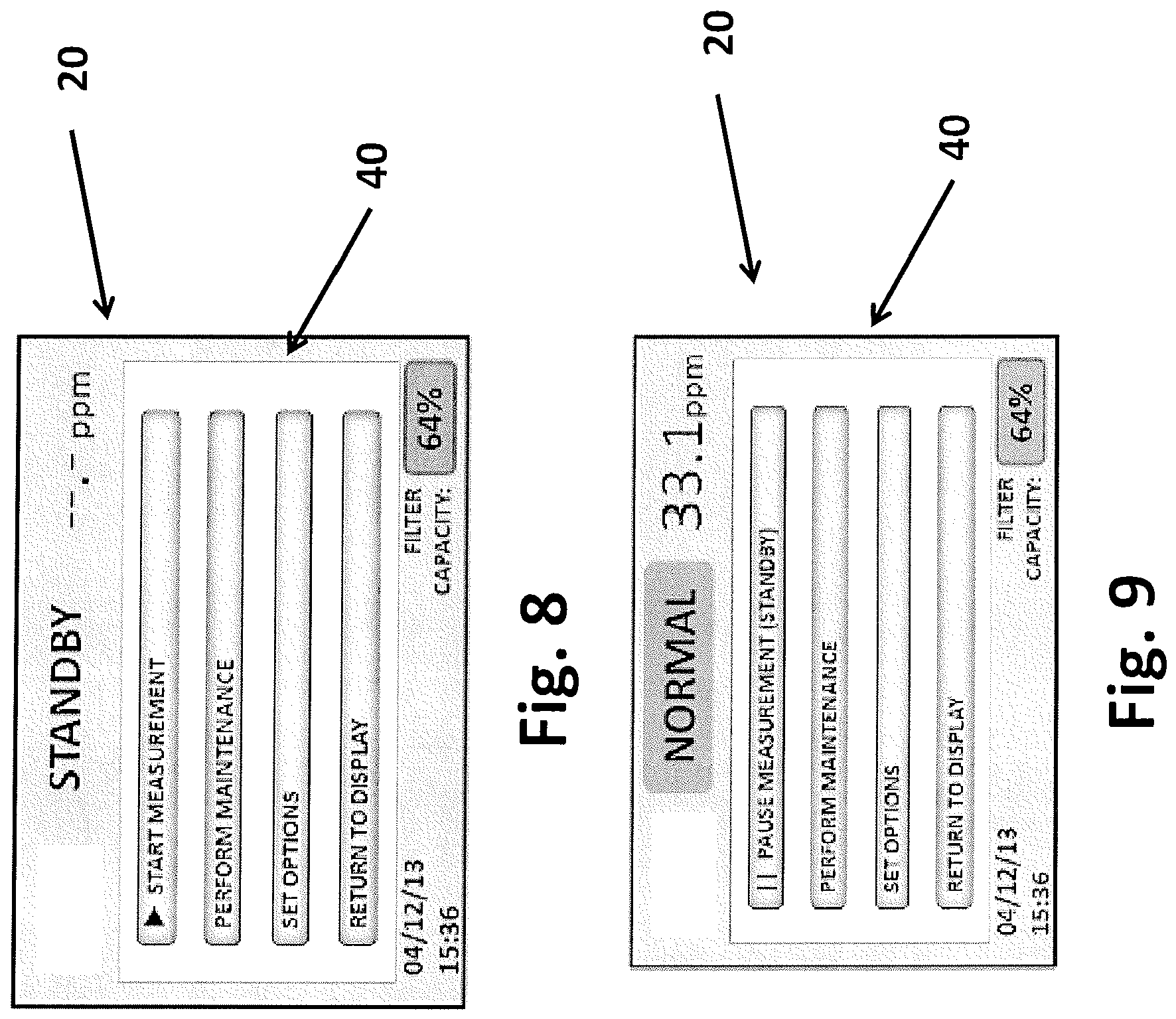 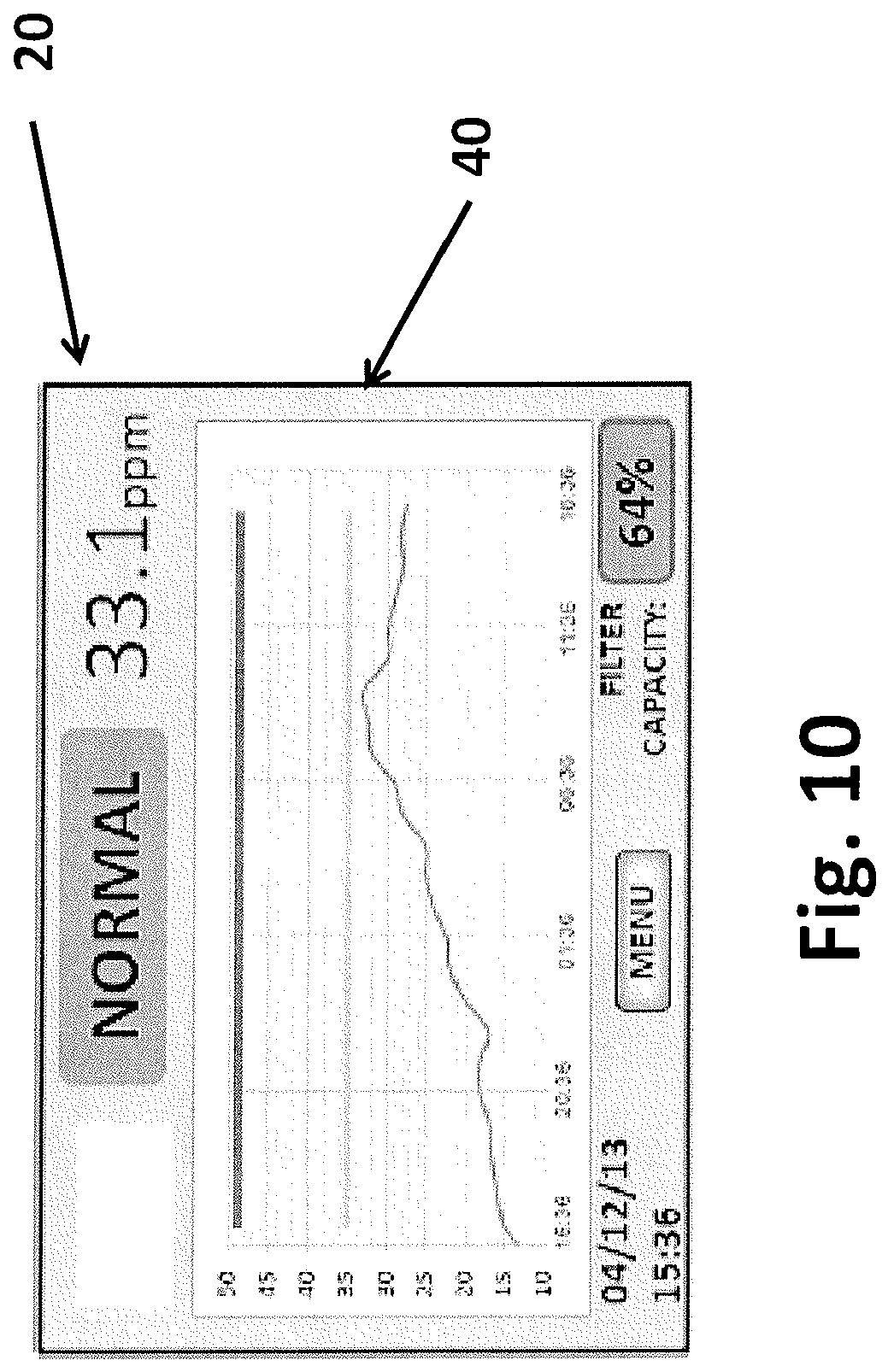 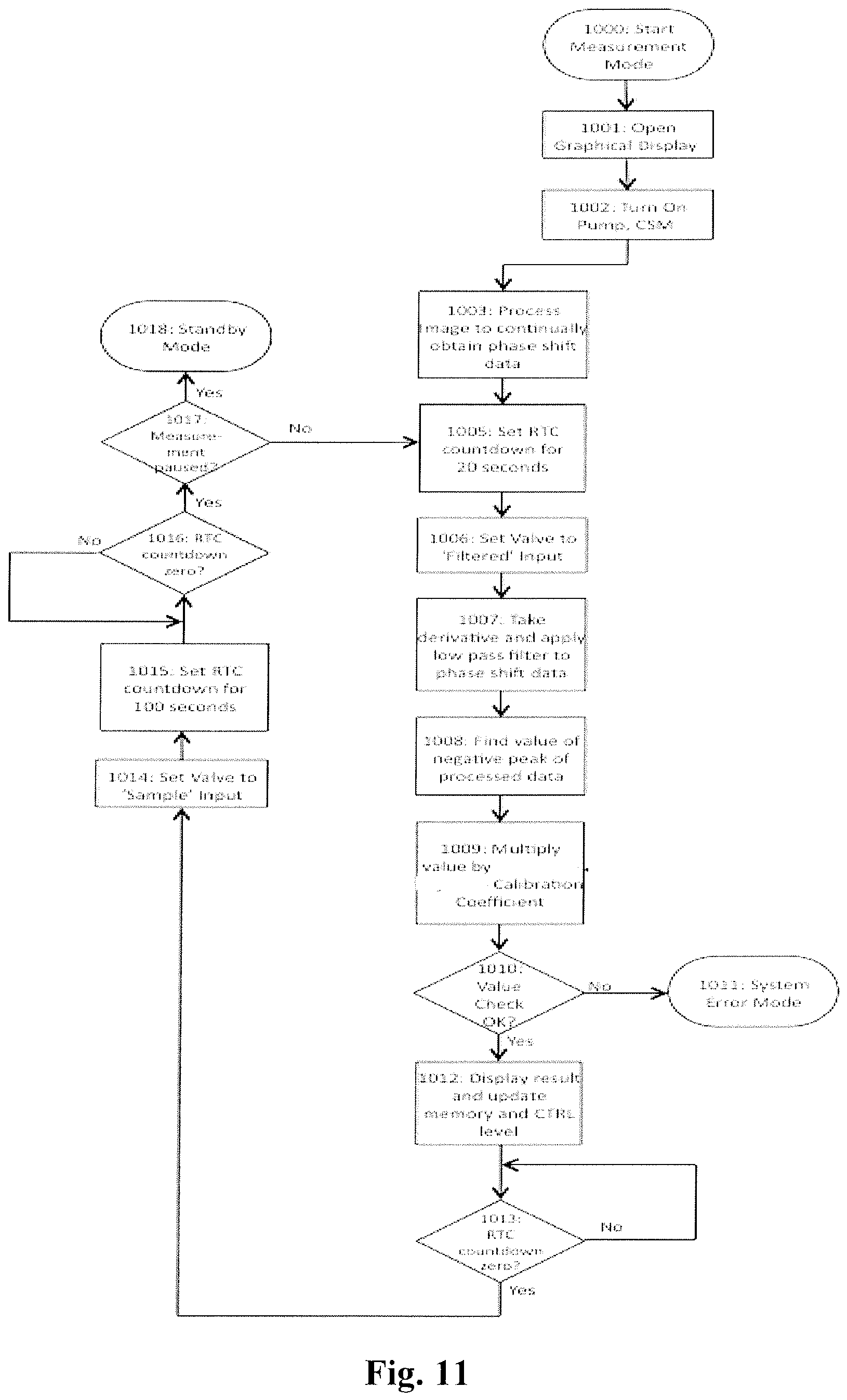 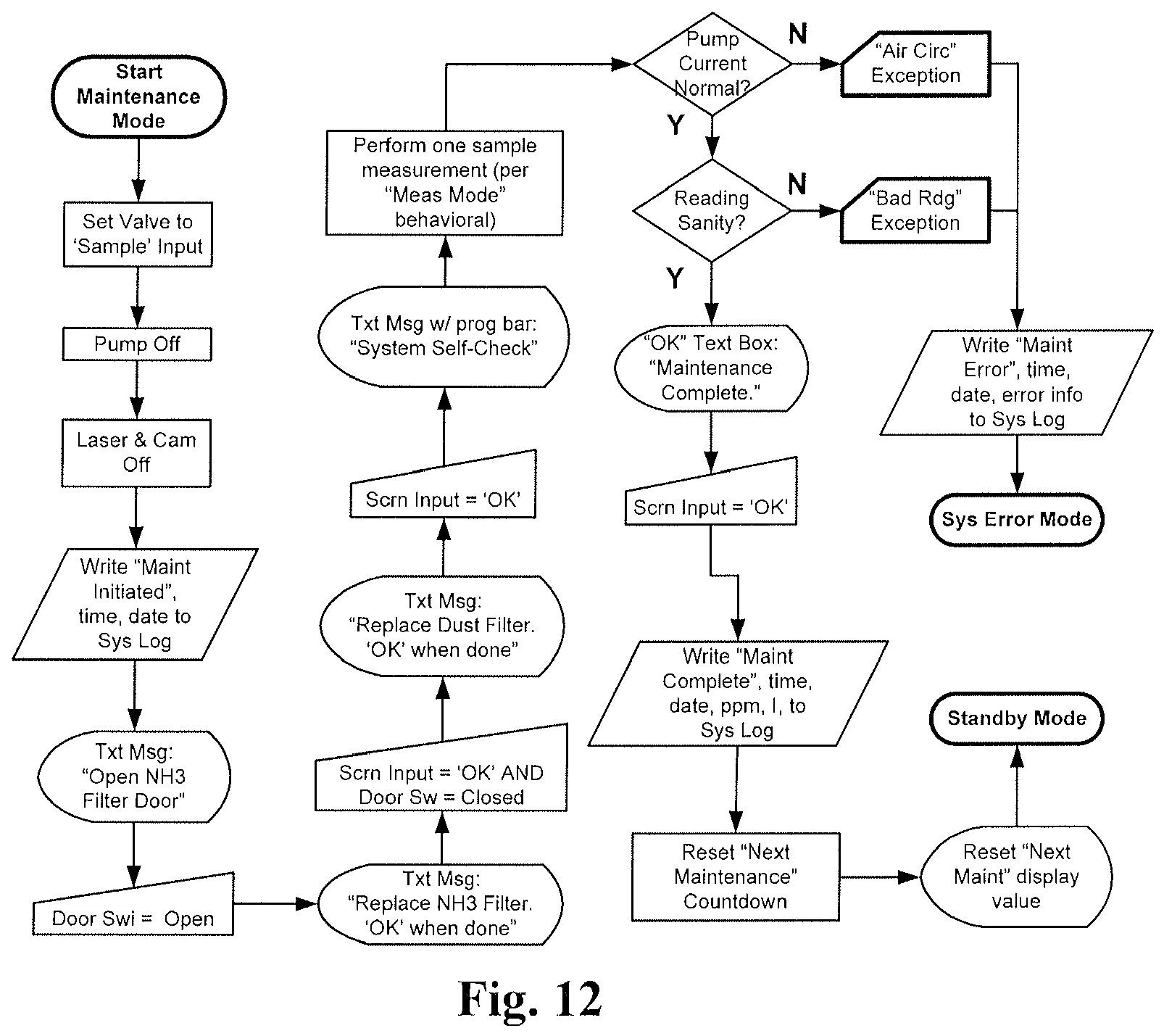 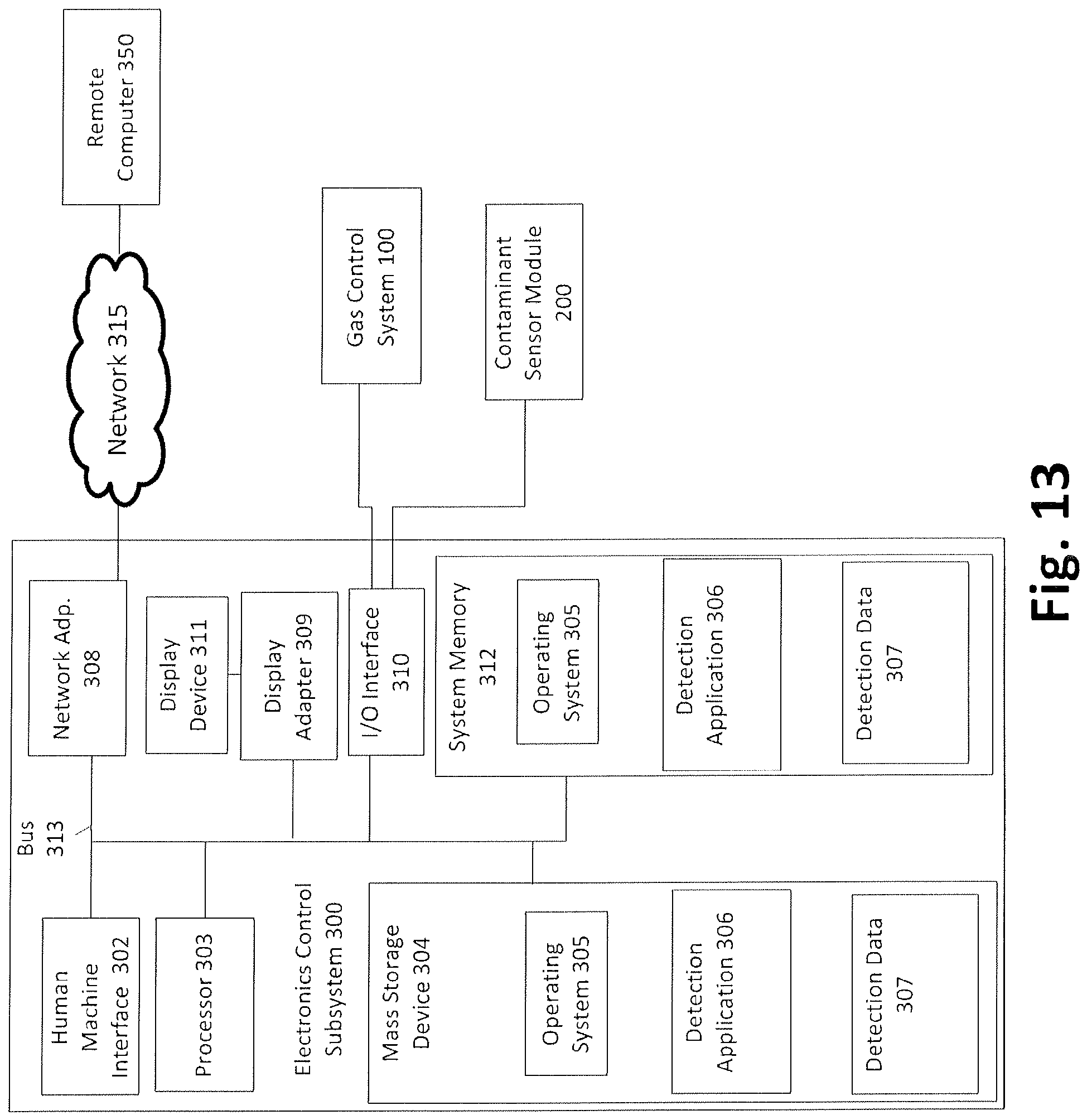