[0002] Referring particularly to cosmetic products such as lipsticks or lip glosses or even lip salves, it is known that they are currently produced according to a method briefly described hereinafter, particularly referring to figure 1. First of all a bulk, or base volume, of lipstick preparation produced according to predetermined technical specification based on a color set, is introduced (block 1000) into an opening or inlet of a lipstick preparing machine which primarily melts the afore said bulk (block 1010).
[0003] The bulk could be molten in a specific melter fluidically connected to the machine.
[0004] Subsequently, the molten bulk is injected through nozzle-like injecting means into a plastic sleeve or coating (block 1020), preferably made of silicone, having the final shape of the lipstick. The final shape of the lipstick tube is obtained by injecting the molten bulk into the plastic sleeve or coating. In detail, the inner surface of the plastic sleeve or coating is designed so as not to adhere to the bulk material, thereby allowing the bulk to be subsequently separated from the sleeve or coating without damaging the outer surface of the lipstick tube, which is required for aesthetic reasons to be free of surface damages.
[0005] In detail, the known machine is provided with a plurality of sleeves or coatings on a circular rotating surface within respective housings angularly spaced along a circumference; a new coating is placed step by step in front of the nozzle-like injecting means by the rotation (block 1030) of this circular surface.
[0006] The bulk injected within the sleeve or coating must then be cooled (block 1040); conversely, it would not be able to maintain the shape provided by the sleeve itself, and the process leading to create the commercially sold "lipstick" could not carry on.
[0007] At this point, mechanical gripping means grasp the rear part of the lipstick tube (block 1050) by extracting the tube itself from the sleeve or coating and introduce it into the final plastic support, the latter typically comprising a first portion, or cap, and a second portion or main body provided with a roto-translating support controlled by a rotating ring having, in turn, a plurality of helically arranged grooves in which respective pins of the roto-translating support are engaged; the lipstick tube is introduced on this support by mechanically countering (block 1060).
[0008] At the end of the latter step, the lipstick tube is subjected to a visual quality control (block 1070), that is manually made by human; if that quality control is positive, the lipstick can be led to the subsequent packaging steps, to a possible additional quality control step, and finally to the destination of the lipstick to the commercial market.
[0009] However, the producing technique hitherto described is characterized by some disadvantages. In particular the Applicant noticed that, on the one hand, the cost of the plastic support is part of the cost of the lipstick; in particular, the lower the cost of the product itself, i.e. the actual lipstick tube, the greater the percentage cost fraction of the support, preferably made of plastic. Often, in fact, medium or even medium-high quality lipsticks are substantially inaccessible or not purchased by the average public because of their retail cost largely due to primary and secondary packaging.
[0010] EP0418841, EP1813335, US5316712, US2012/283727 disclose the generic state of the art.
[0011] Furthermore, the Applicant noticed that the disposal of the lipstick support, preferably made of plastic, at the end of the use is not environmentally friendly: in fact, it is typically made of materials, or coated with paints or other coatings, which are not biodegradable.
[0012] Furthermore, the Applicant has found that there is an excessive waste of not used products, such as lipsticks and lip glosses, with their packaging with respect to those actually required by the market.
[0013] Nevertheless, the Applicant has observed that the quality control performed by the human being is slow and expensive, as well as not always reliable. However, such quality control has a substantial impact on productive costs of the lipstick.
[0014] Finally, the current producing methods and machines are not able to substantially reduce the working times of the machine itself.
[0015] Therefore, the Applicant conceived a producing machine for capsules of lipstick able to solve the above described drawbacks.
[0016] Similarly, therefore, the Applicant conceived a method for producing capsules of lipstick able to solve the above described drawbacks.

Description of the attached figures

[0029] In the present description, the Applicant illustrates a preferred, non-limiting embodiment of the invention, by referring to the appended figures, wherein:

Detailed description of the invention.

- providing at least one containment capsule (200), comprising at least one open cavity adapted to contain a predetermined amount of cosmetic product of less than 20g and provided with at least one thermally conductive portion;

- introducing at least one empty containment capsule (200) into an orifice or container (195) of said melting and preparing machine;

- melting at least one portion of said base volume of the cosmetic product;

- said semifinished product being intended to undergo subsequent steps of working and shape transformation in order to become a final cosmetic product, before being finally used by a user.

2. Method according to claim 1, characterized in that said sealing step (2050) comprises a step of sealing the cavity of said capsule (200) by a lid (210) or tongue operating to isolate said predetermined amount of cosmetic product.

3. Method according to claim 1, comprising a step of extracting said containment capsule (200) filled with said predetermined amount of cosmetic product from the machine.

- a feed line extending from the first vessel (100) to feed an additional heating container (120), heated by second heating means (130),

- said capsules (200) being able to comprise a predetermined portion of said base volume of cosmetic preparation and making up a semifinished cosmetic product able to receive additional working steps before use.

5. Machine according to claim 4, configured to carry out a plurality of injection cycles of said predetermined portion of base volume of cosmetic preparation in a sequential and predetermined way.

6. Machine according to claim 5, configured so that said sealing step of said containment capsule (200) occurs downstream of said injecting step.

9. Machine according to claim 8, wherein said sealing stage of said containment capsule operates in a controlled atmosphere inside a container configured to prevent macro-contaminants from entering into said capsule.

11. Machine according to claim 5, comprising handling means to handle said at least one capsule (200) between said injecting means and said sealing stage through an at least partially linear translation and/or a rotation. 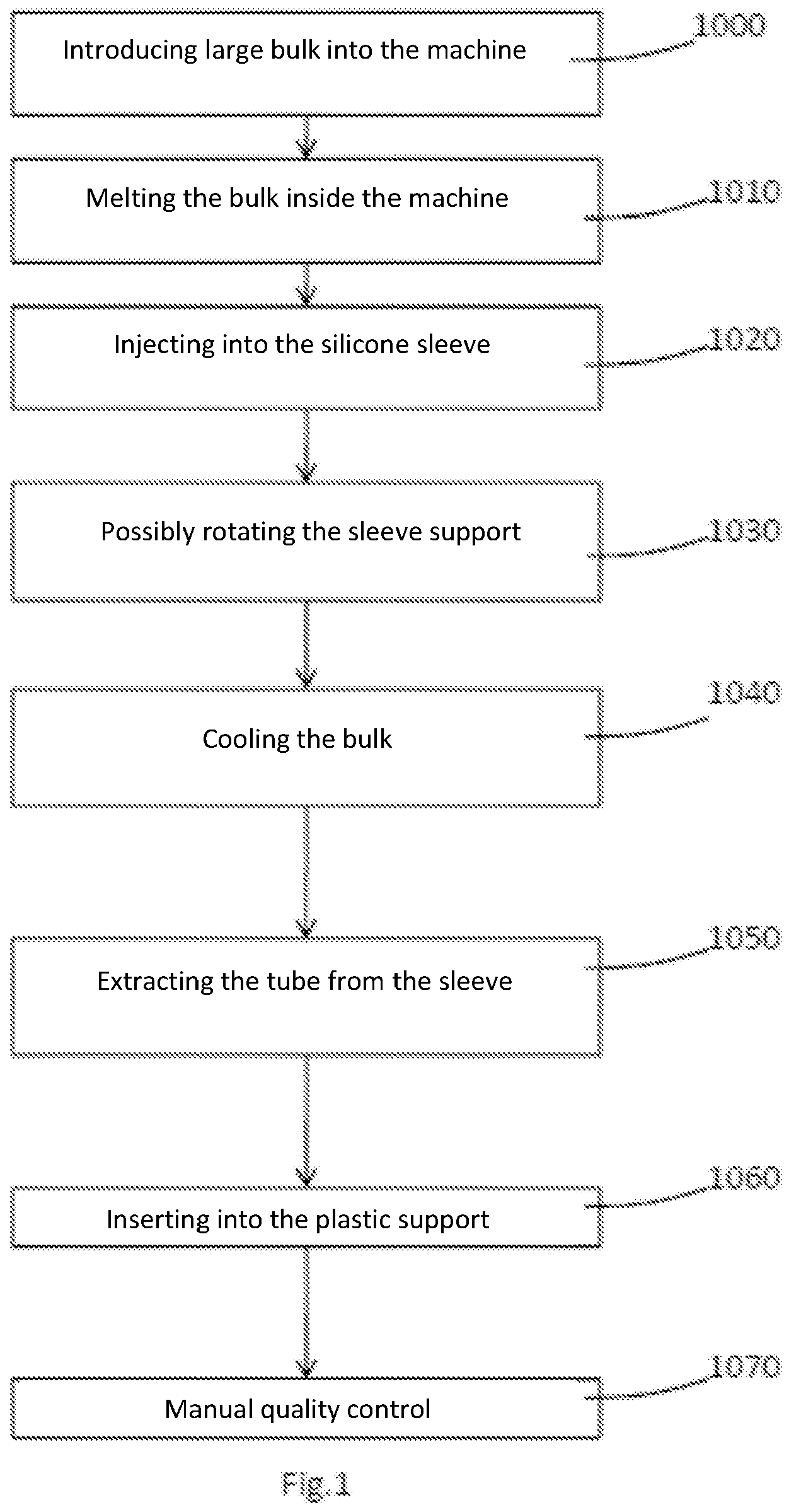 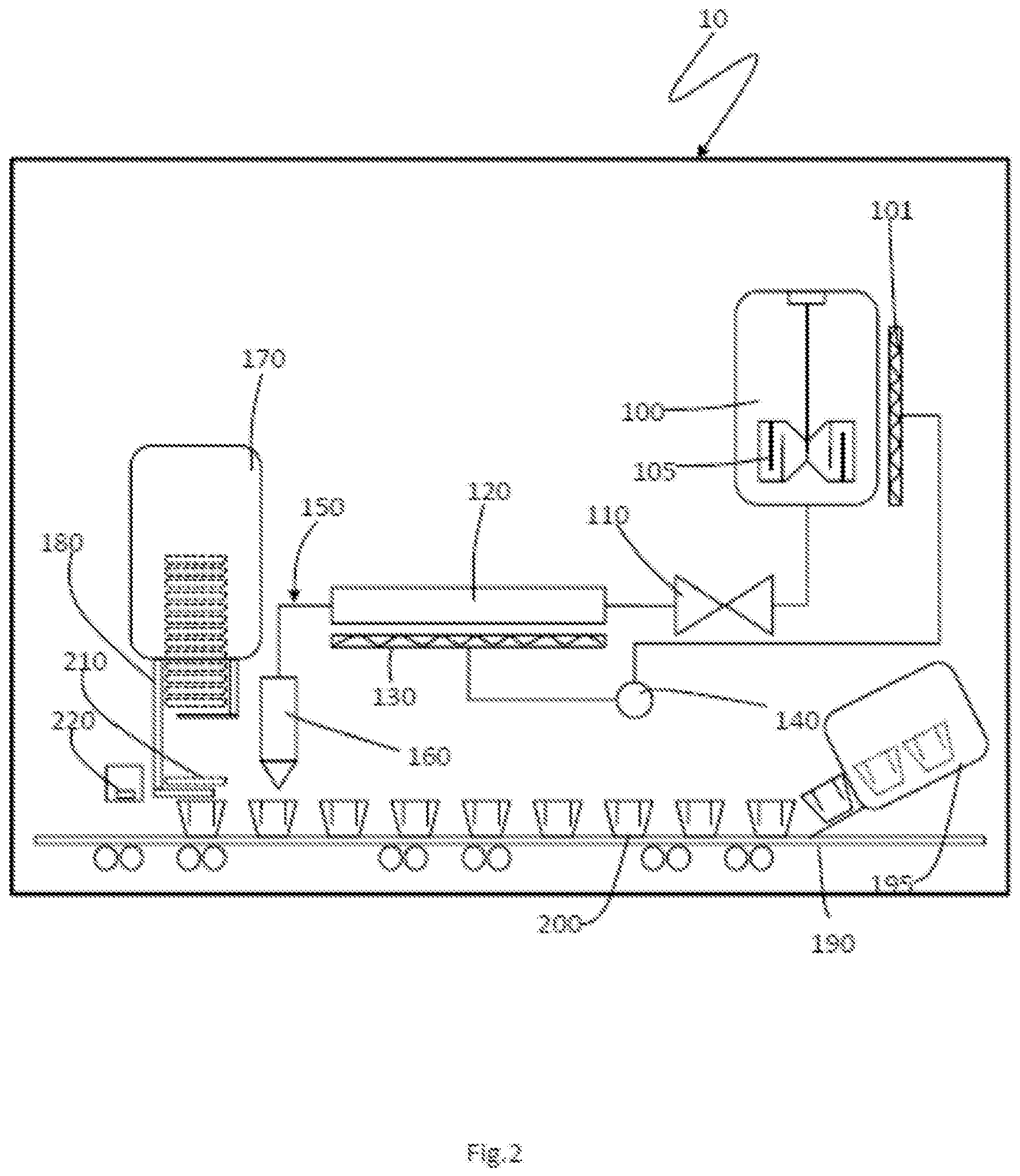 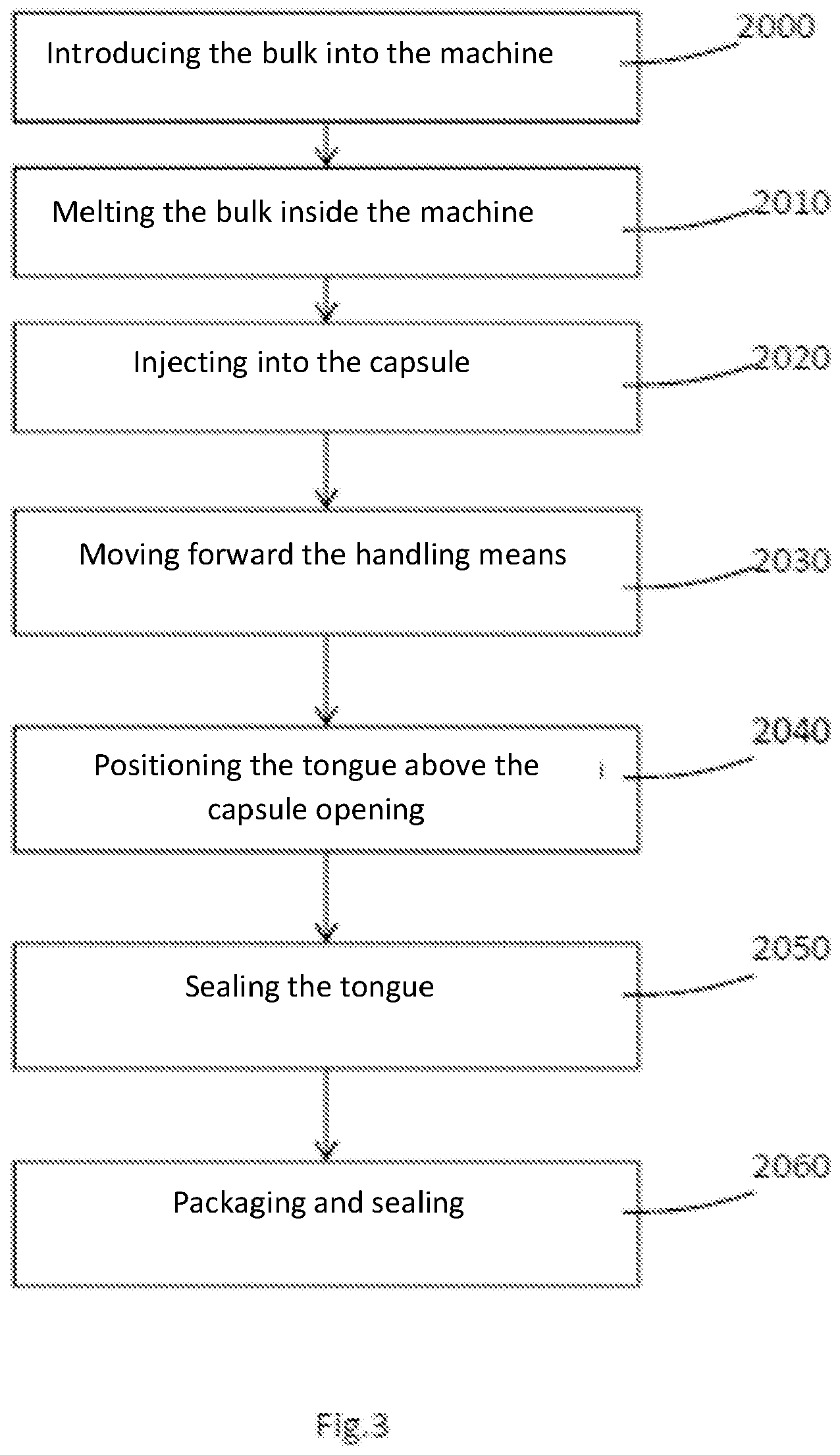