[0002] Amblyopia is a vision disorder whereby information from one eye is not completely transmitted or not fully processed by the brain in favor of information from the other, "strong" eye. A common treatment modality for Amblyopia is the periodic occlusion of the "strong" eye for a prescribed duration over a specified time period. Occlusion may be achieved with an opaque "patch" that covers the eye by attachment to the face or by attachment to eyeglass lens or frame. This method of periodic occlusion is commonly referred to as "patching." Patching is also used as a treatment of strabismus and other vision disorders.
[0003] The most common method of tracking such treatment is asking the patient or caregiver to keep diaries or logs of patching without the use of any automation. The diary is reviewed when the patient next meets with their practitioner. This method relies on the patient or caregiver accurately recording these times. However, this may often be inaccurate.
[0004] A prior art apparatus uses two skin contact electrodes added to an adhesive patch and connected to electronics carried in a separate bag. The device seeks to use electrical resistance measurements between the electrodes as a sign of the patch being worn.
[0005] Another prior art apparatus attaches a small, self-contained device to a patch and monitors the temperature difference between the front and back of the device, as a signal for the wearing of the patch. This method does not rely on the patient or caregiver remembering to record timings but does require them to remember to transfer the sensor/microcontroller combination from patch to patch.

[0006] The present invention is illustrated by way of example, and not by way of limitation, in the figures of the accompanying drawings and in which like reference numerals refer to similar elements and in which:

Figure 1 is a block diagram of one embodiment of an occlusion dosage monitor (ODM).

Figure 2A illustrates one embodiment of a top view of the user's face, showing glasses and logging device.

Figure 2B illustrates a cross-section of the logging device and one glass arm, showing the relative positions.

Figure 2D illustrates one embodiment of the logging device showing one sensor.

Figure 2E is a block diagram of one embodiment of the logging device.

Figure 2F is an exemplary circuit diagram of one embodiment of the logging device.

Figure 3A, 3C, and 3D illustrate embodiments of a top view of the user's face, showing glasses, patch, and logging device.

Figure 3B illustrates an exemplary patch, showing one embodiment of a relative location of the magnet.

Figure 4 is a flowchart of one embodiment of utilizing the system.Figure 5A illustrates an exemplary time-series output from an ODM with a single magnetometer, and a large magnet.

Figure 5B illustrates an exemplary time-series output from an ODM with a single magnetometer, and a small magnet

Figure 5C illustrates an exemplary time-series output from an ODM with two magnetometers, and a small magnet.

M is the measurement output 3-vector, with a component for each of the three axes.

B is the true 3-vector magnetic field being measured

A provides the offset for each of the three axes.

ε is a 3-vector representation of the small random errors due to thermal fluctuations and transient interference effects within the electronic circuitry. It will have a zero mean.

a magnet integrated with an object whose disposition is to be monitored;

a first magnetometer located in proximity to the object;

a processor to receive data from the first magnetometer and the second magnetometer, and calculate a measurement vector to determine the disposition of the object.

a covering portion to substantially cover one eye; and

a communication link to communicate data from the memory to the processor.

a microprocessor to obtain the data from the first magnetometer and the second magnetometer, and store the data in the memory.

a memory to store data from the magnetometer; and

a communication link to obtain the data from the memory, the data processed to show a pattern of wearing and not-wearing the eye patch, to monitor compliance with a medical prescription.

the processor comprising a microcontroller to control a timing of measurements of the magnetic field, and storing of the data.

a base station to receive data from the logging device, the base station comprising one of: a smart phone, a computer application, and a special purpose device.

a communication system to inform one or more of the user, a medical professional, and a designated party of the pattern. 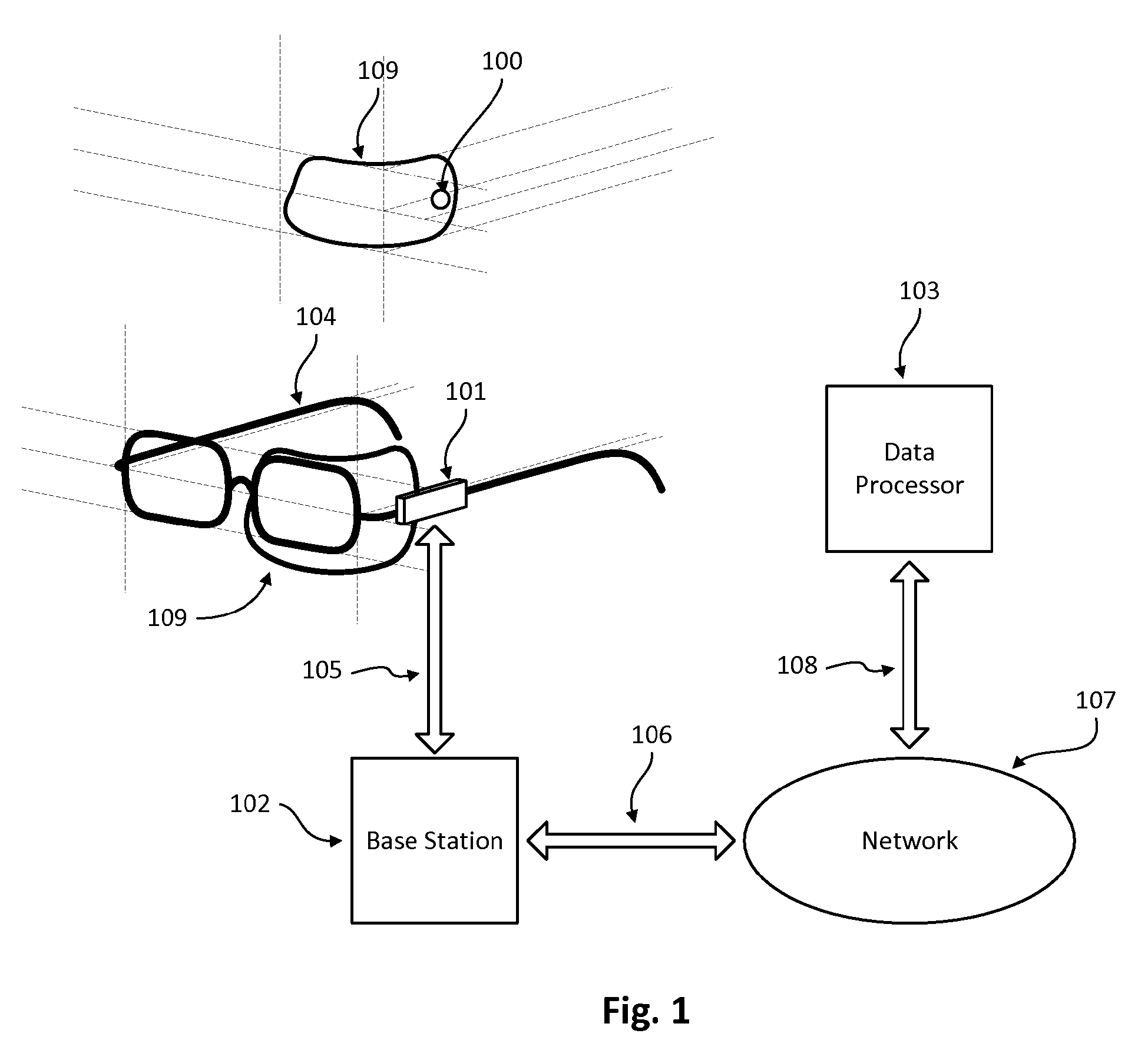 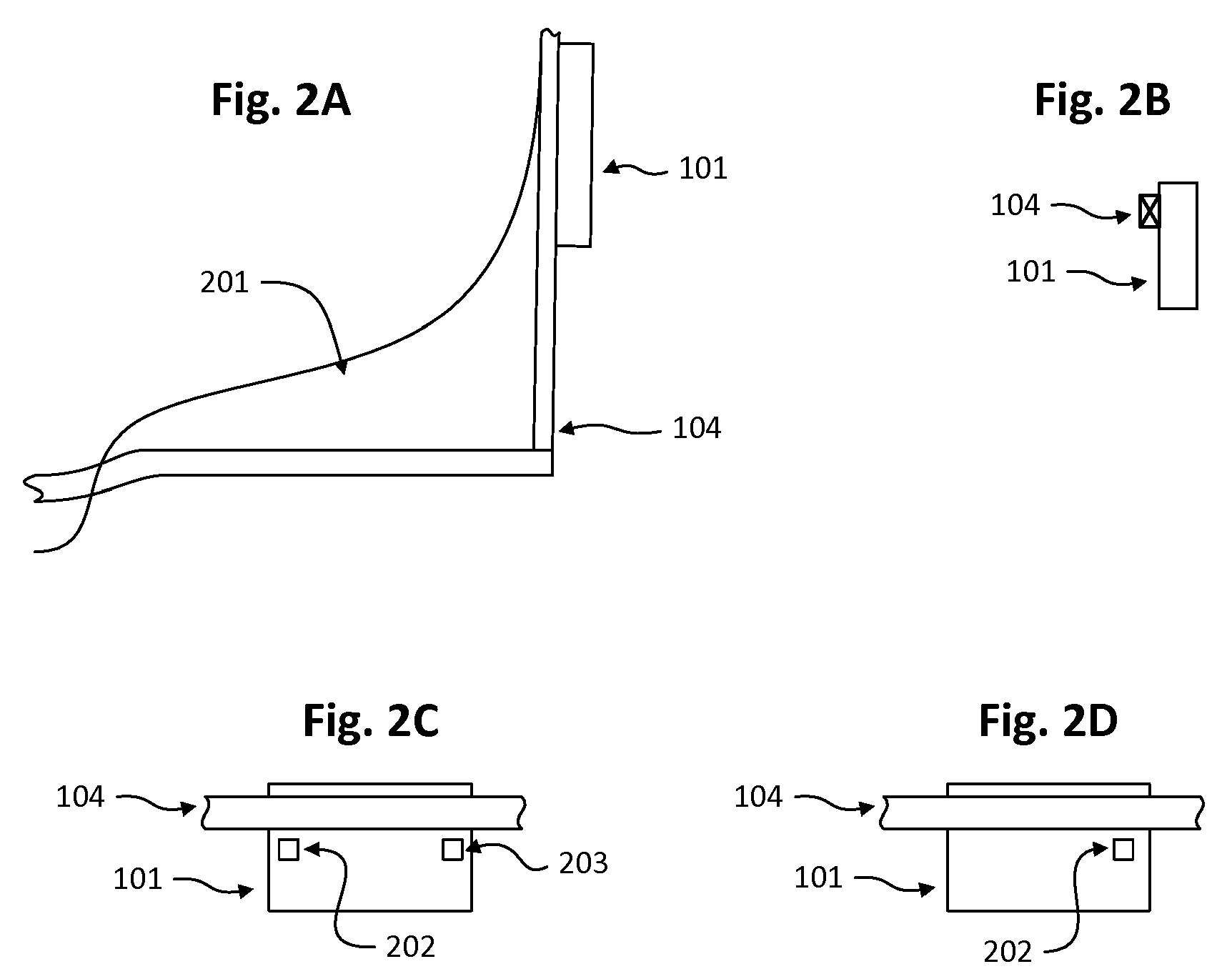 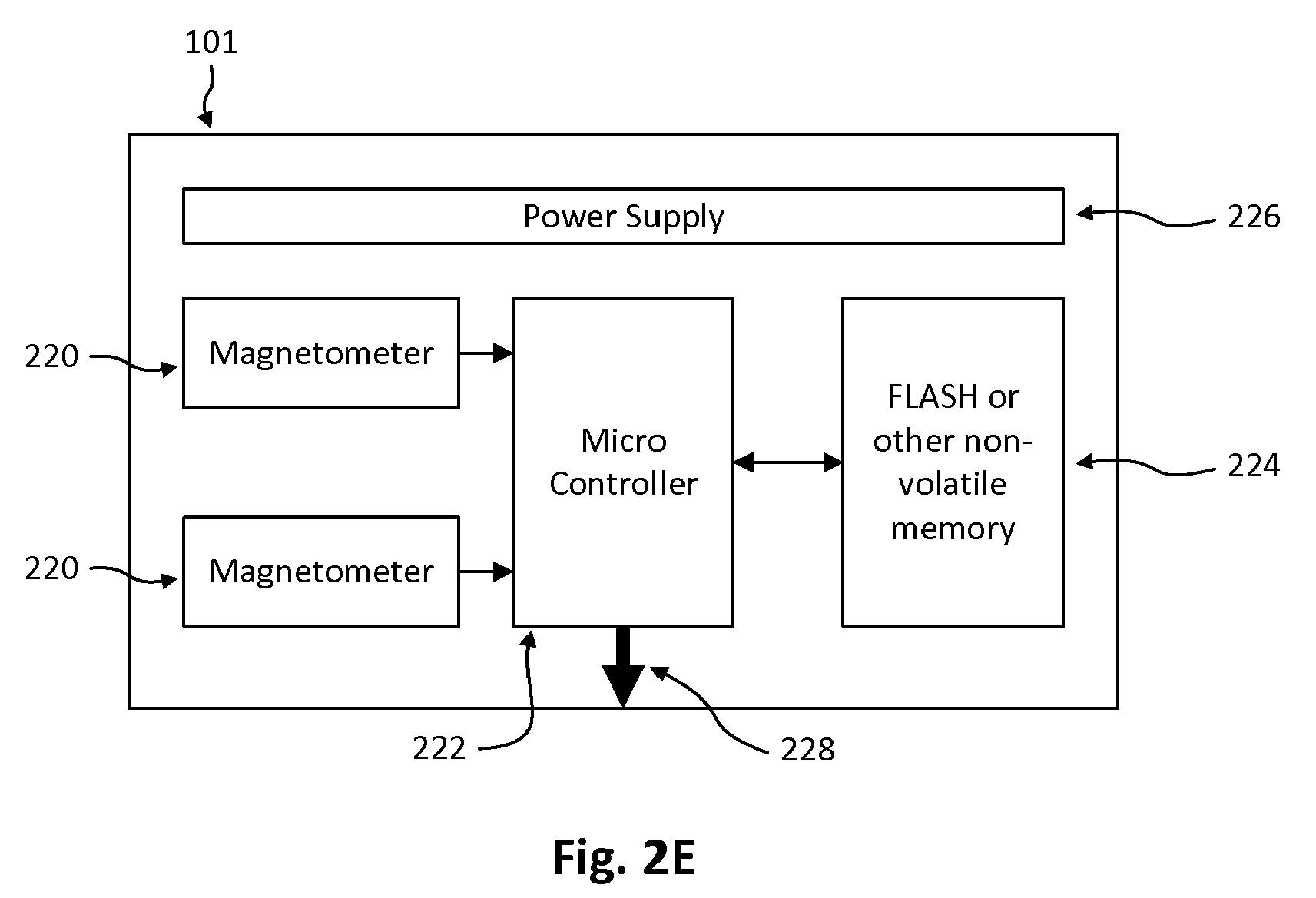 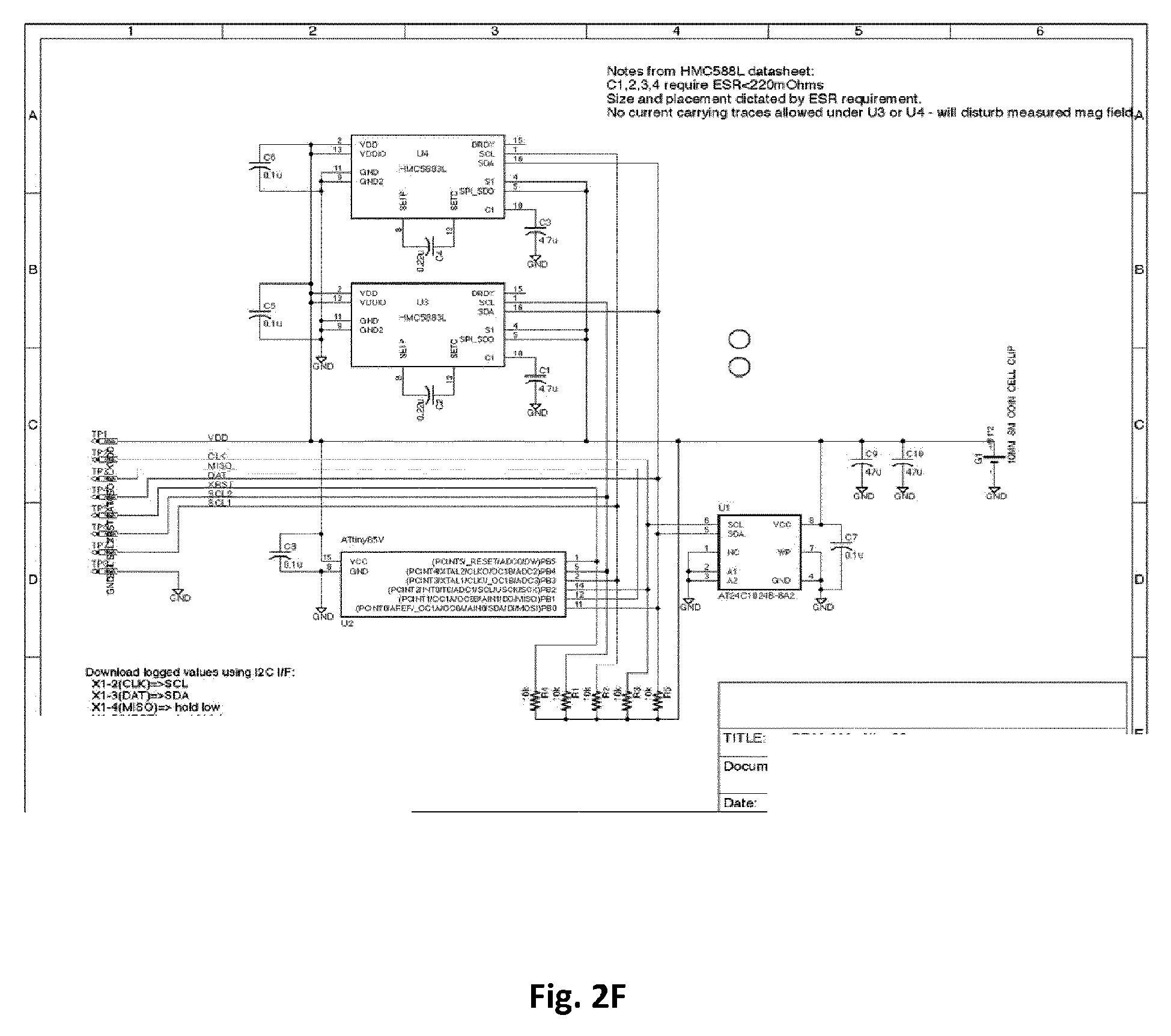 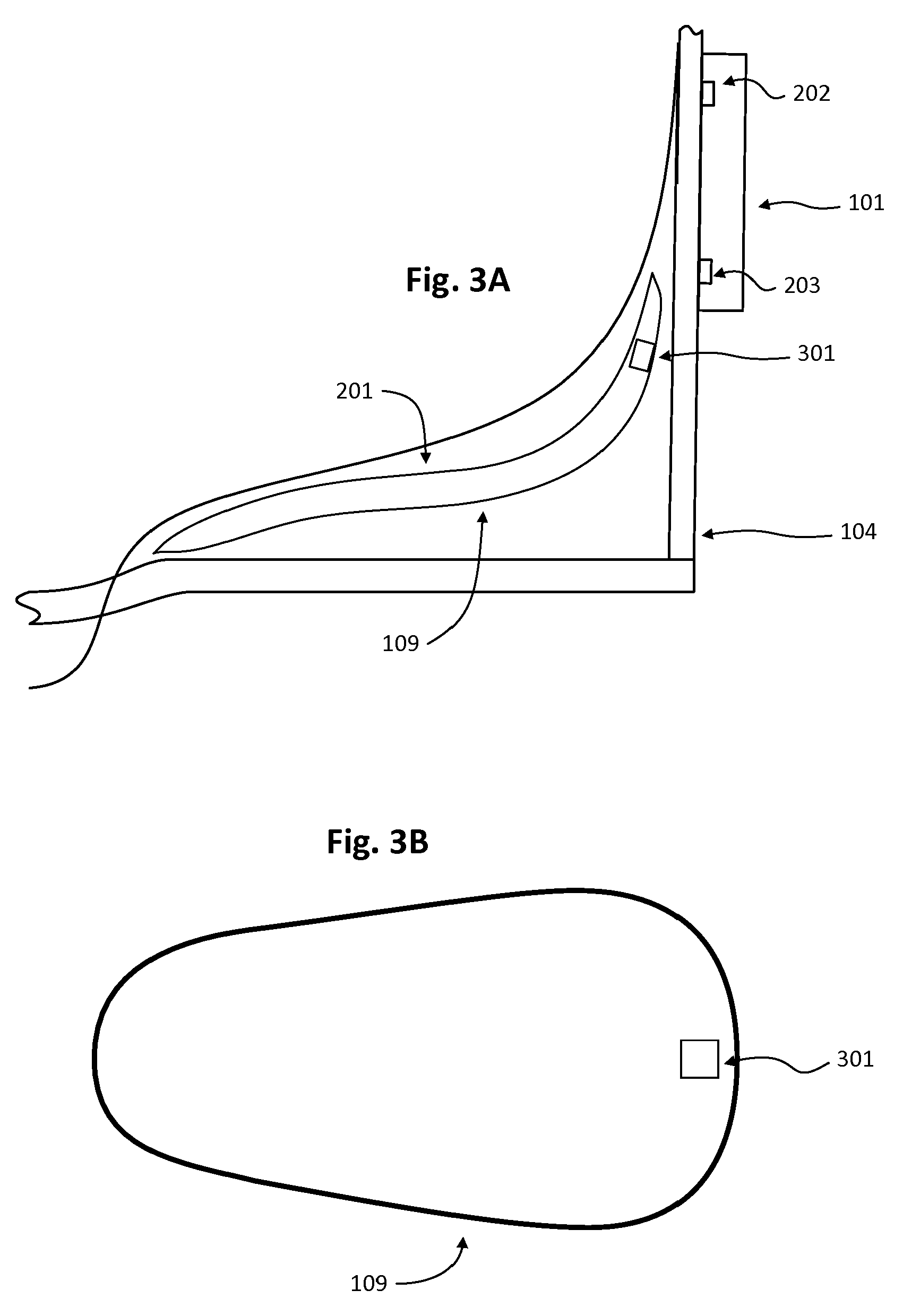 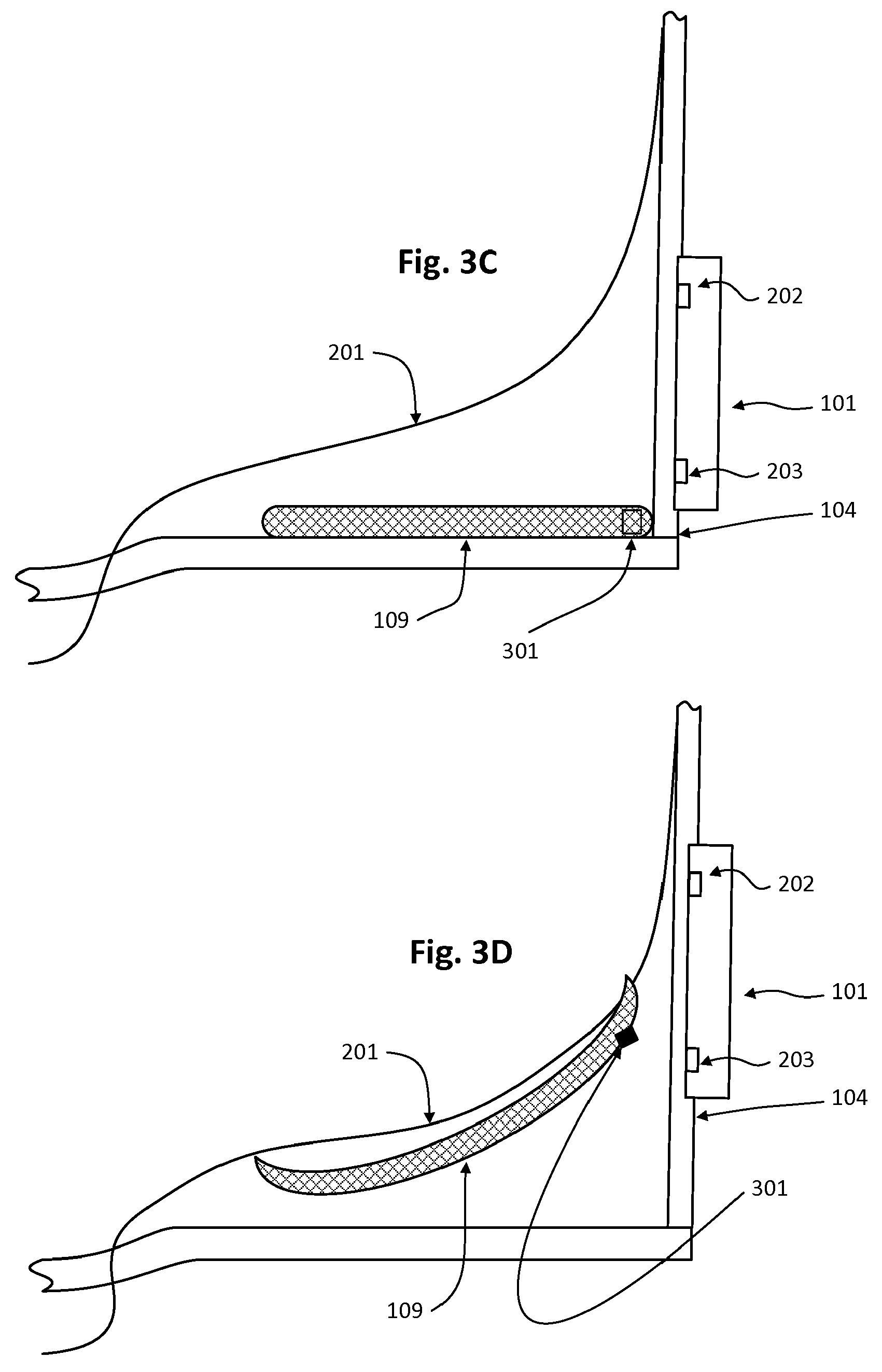 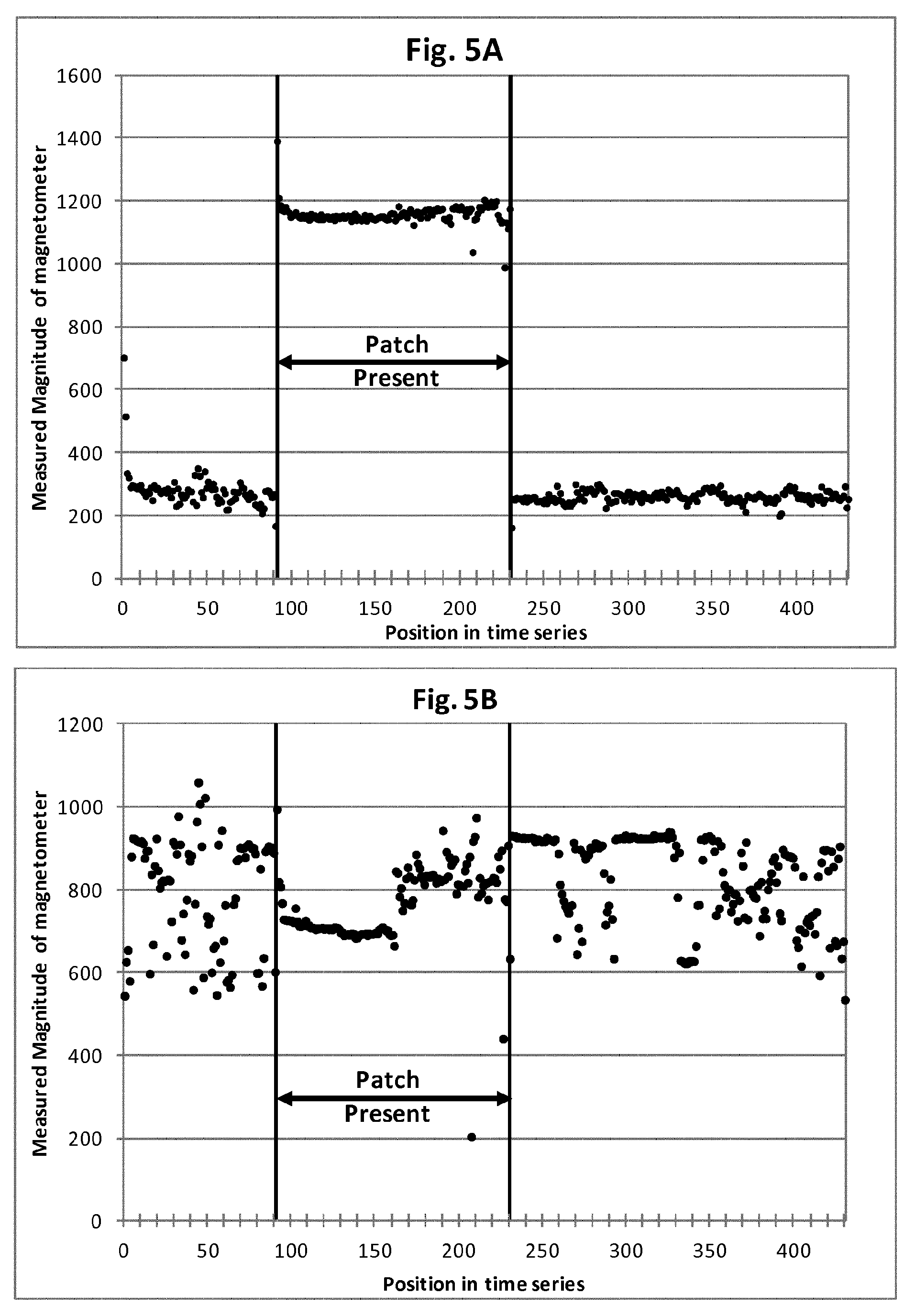 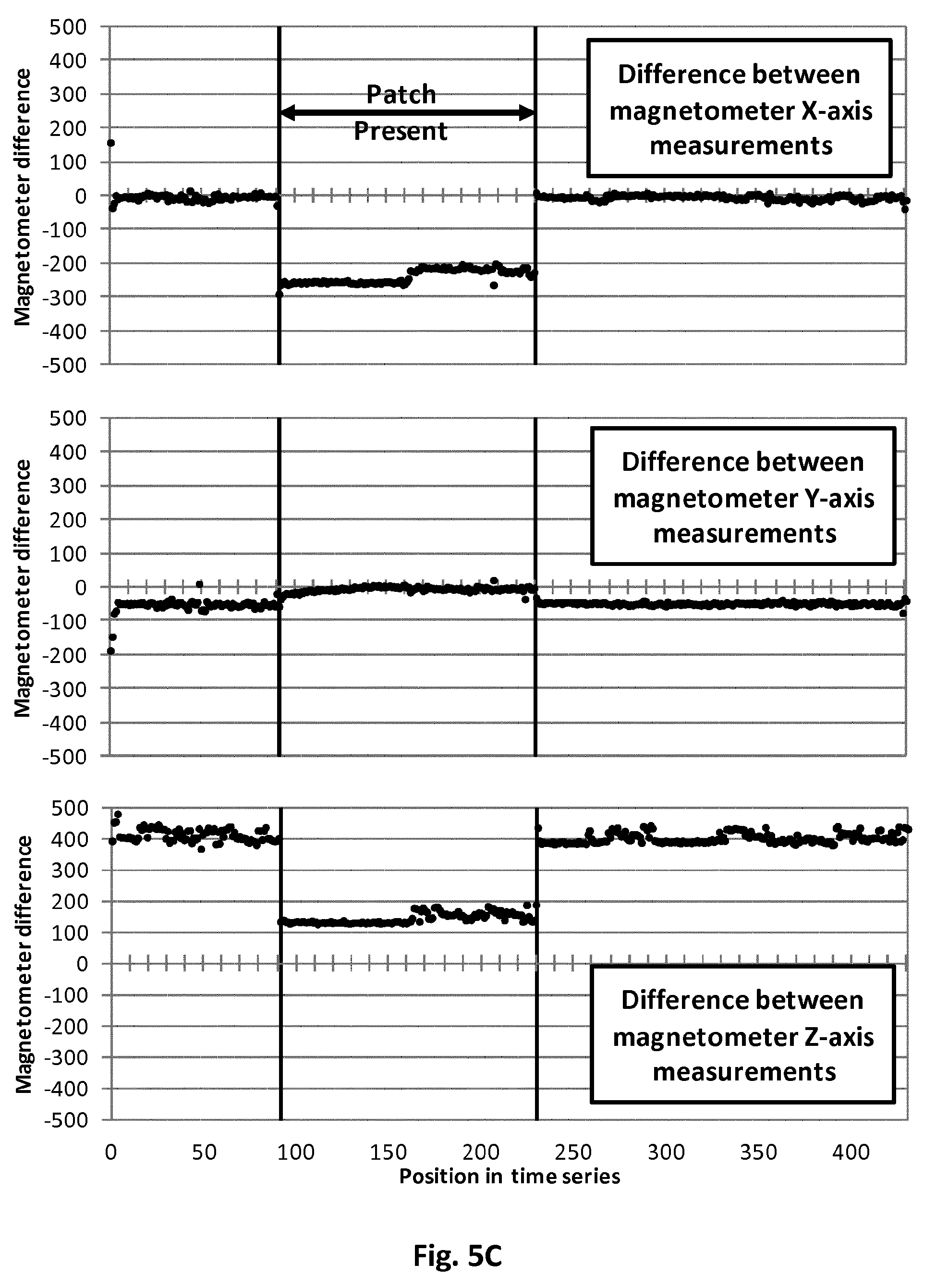 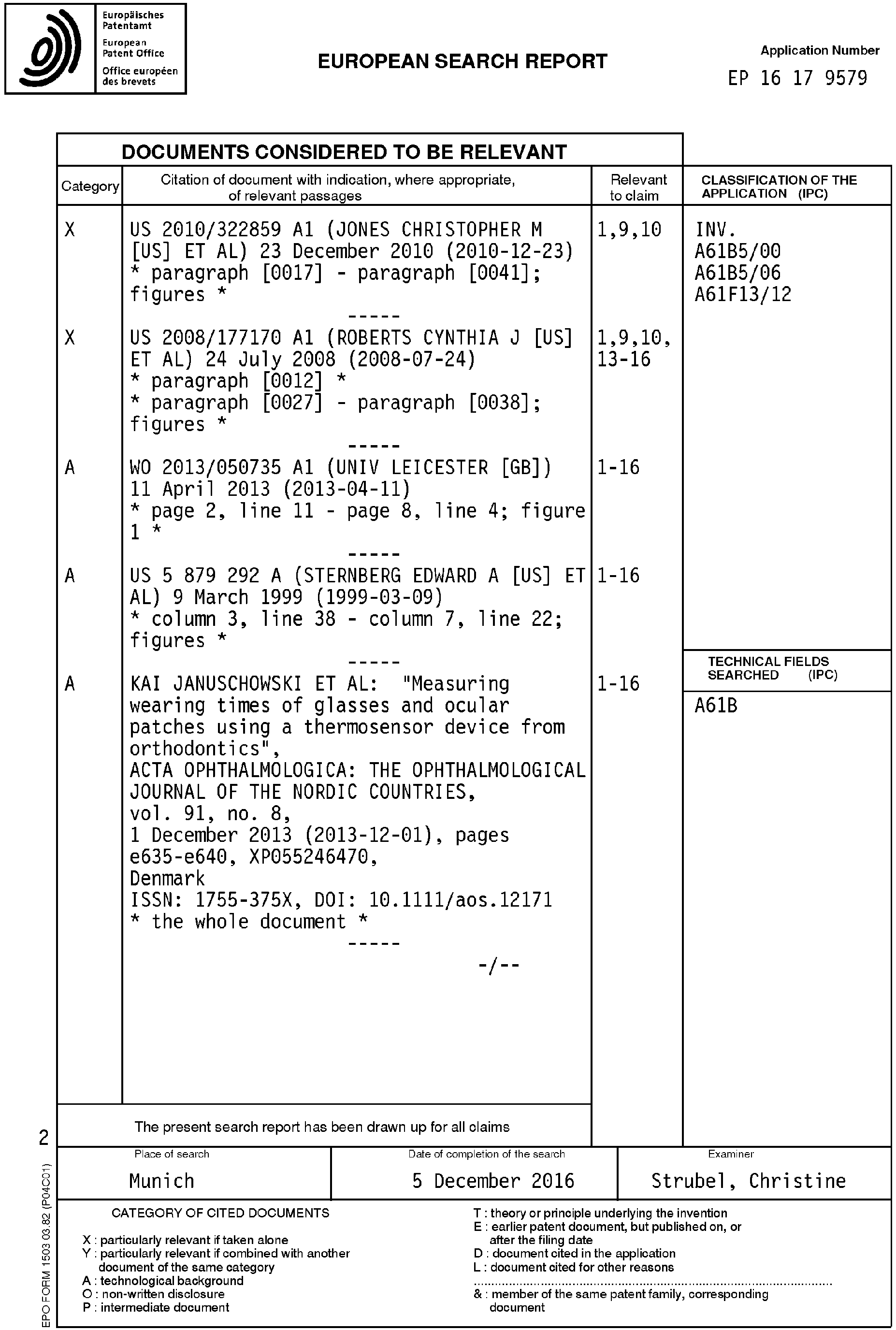 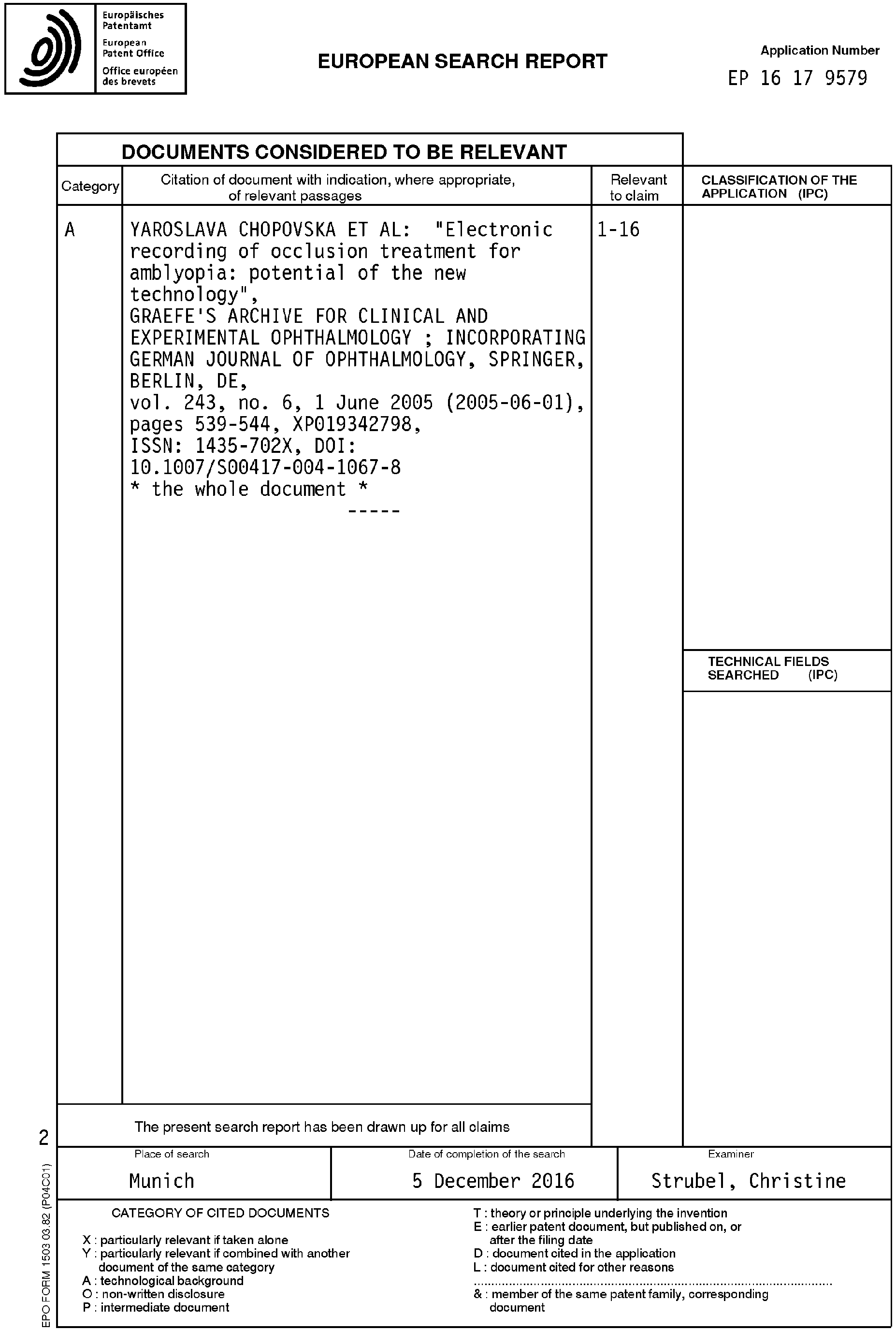 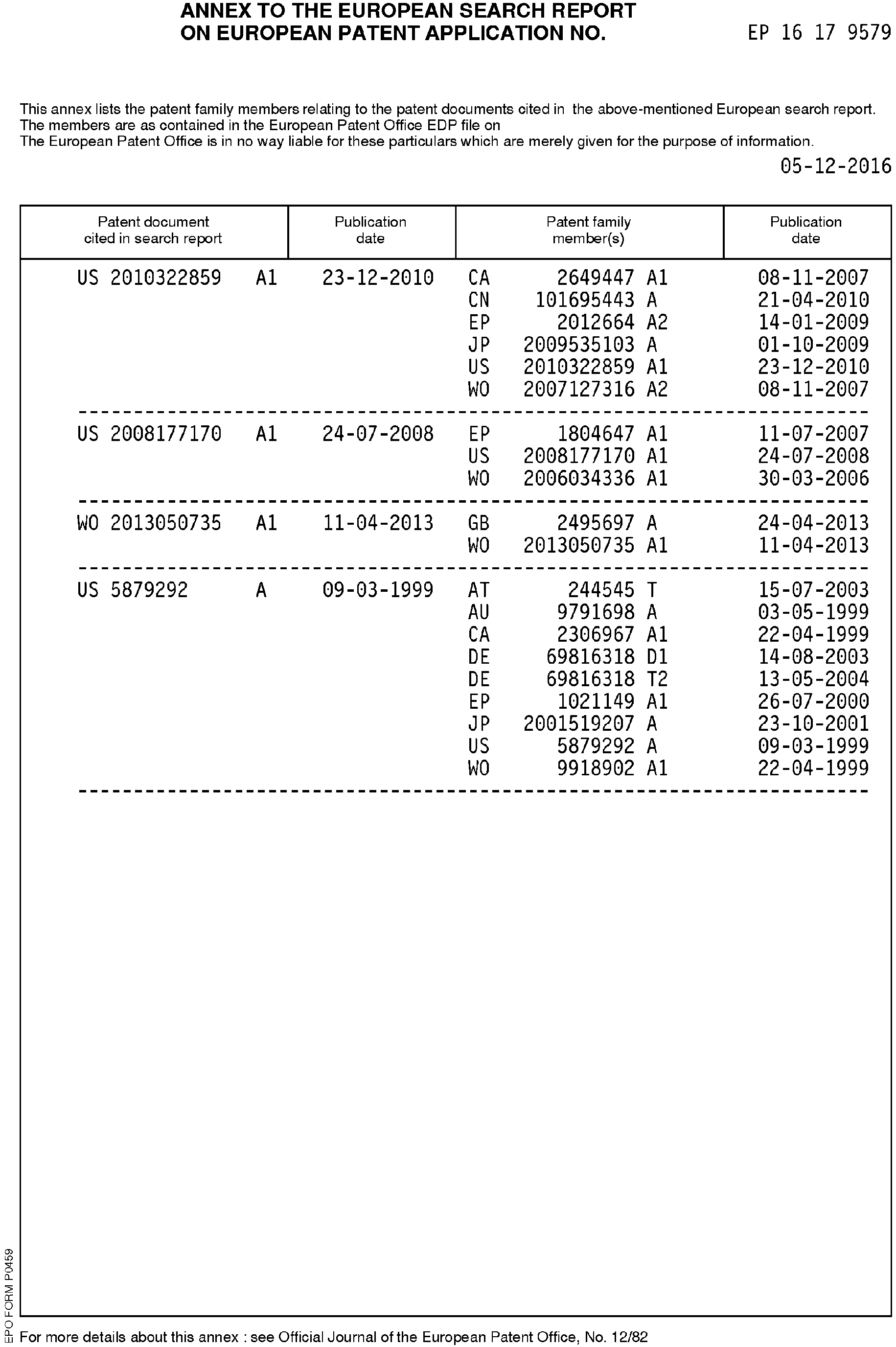