[0001] The present invention relates to a motorised device for bevelling of the edges of coating tiles, in particular ceramic tiles.

[0002] It is well known that, in the technique of coating of building surfaces, there is an extensive use of coating tiles, typically tiles with a ceramic surface. In the laying of this tiles, particularly along the connecting edges, there is the problem of trimming, or rather bevelling, the edges of the tiles in order to give continuity to the outer surface despite the non-negligible thickness of the tiles.
[0003] Typically, this bevelling operation allows to create an inclined bevel, typically at 45°, along the two opposite edges of two adjoining tiles. This bevel is also called "jolly" cut in the jargon. The bevel is realised on the lower side of the tile, i.e. reducing the thickness of the base (typically made of ceramic or stoneware) and leaving the surface finishing layer unaltered, defining the typical wedge-shaped section along the edge of the tile.
[0004] The bevelling operation is carried out not only with an inclined flat surface, such as the classic "jolly" cut to make two tiles abut on a 90° corner, but can also be employed to confer to said edge a half-circle or a quarter-circle section profile or other desirable profile. In general, however, there are specific issues concerning coating tiles, in which there is a noble side (i.e. the one that is exposed to view) whose integrity should be maintained and a bonding side (i.e. the one that is made to adhere to the slab, or to the wall), expendable during machining.
[0005] Devices allowing to obtain this trimming operation are known. They include, in general, a small hand-held frame, on which a drive motor of a spindle is mounted, a disc for cutting and properly shaping materials being fixed on the latter. Normally, the small frame is designed to mount directly a typically commercially available angle grinder, which represents the universal tool for operators in this sector.
[0006] The small frame is configured in such a way that the disc will be placed obliquely with respect to the plane of the tile, according to a desired inclination, which can be precisely 45° in the case of the above mentioned "jolly" cutting.
[0007] When a simple 45°-bevel is to be performed, it is sufficient to use a flat disc, the surface of which is progressively disposed obliquely at 45°. On the other hand, when a trimming with a more elaborate profile must be performed, it is necessary to place the drive spindle of the abrasive disc vertically and to exploit action of the edge surface of the abrasive disc or of a grinding wheel, suitably shaped so as to obtain the desired profile of the tile, having a matching shape.
[0008] Such a system is arranged to be put on the tile surface and then guided by hand to move along the edge of the tile, while the abrasive disc - which is located between the small frame and the tile - rotates in speed against the edge of the tiles, removing the desired part of this edge. This implies machining on the tile turned upside down, namely with its noble finished surface facing downwards, so that the abrasive disc works on the hidden and expendable side of the tile.
[0009] However, these known types of configurations are not entirely desirable, especially because it is difficult to determine the correct distance adjustment of the abrasive disc from the tile, with the risk of damaging or excessively weakening the outer surface of the tile, in particular in the case of a glazed or polished surface. Furthermore, since the support frame works in contact with the hidden surface of the tile, which is the one provided with reliefs and shapings to facilitate the grip of the laying adhesive, the sliding of the tool is disrupted and irregular, with consequences in terms of machining accuracy.
[0010] Similar abrasion devices exist in multiple sectors, such as for example US2984270 and US6138726. Document US2006/0217044, on which the preamble of claim 1 is based, illustrates a frame for a polishing machine; in this case, the frame can also slide on the upper surface of the tile because the polishing tool cannot impair its integrity.

[0011] The problem underlying the invention is therefore to supply a motorised device for trimming tiles that overcomes the drawbacks mentioned above, by a simpler and lighter, as well as more cost-effective, structure, and which allows to obtain an improved machining in terms of aesthetic effect and precision.
[0012] These objects are achieved through the features mentioned in claim 1. The dependent claims describe preferred features of the invention.

[0013] Further features and advantages of the invention will anyhow be more evident from the following detailed description of a preferred embodiment, given by mere way of nonlimiting example and illustrated in the accompanying drawings, wherein:

Fig. 1 is a top perspective view of the trimming device according to the present invention;

Fig. 2 is a perspective view from below of the device machining a tile;

Fig. 5 is a cross-sectional view of a part of the device of the invention on which an abrasive disc is mounted. 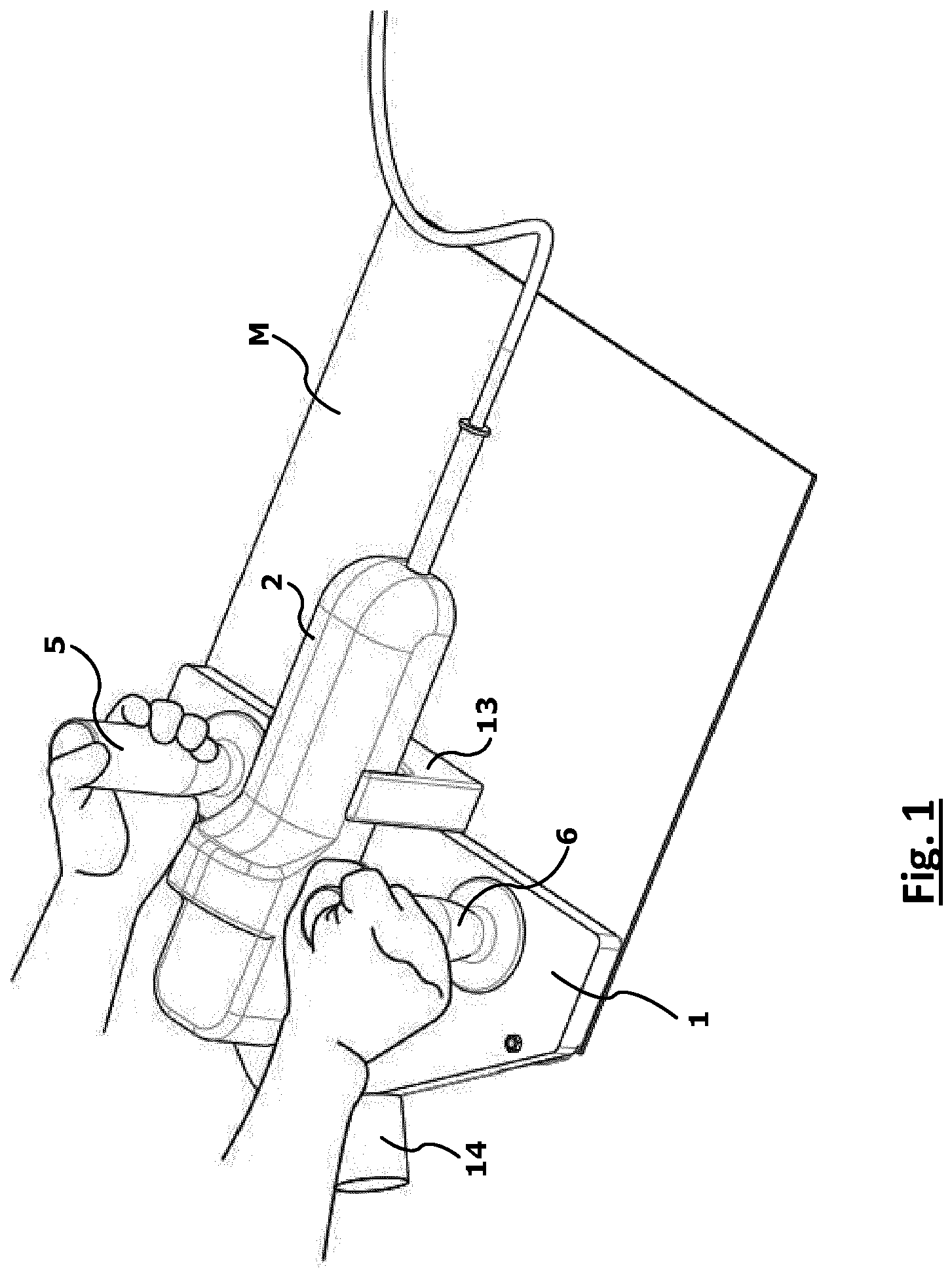 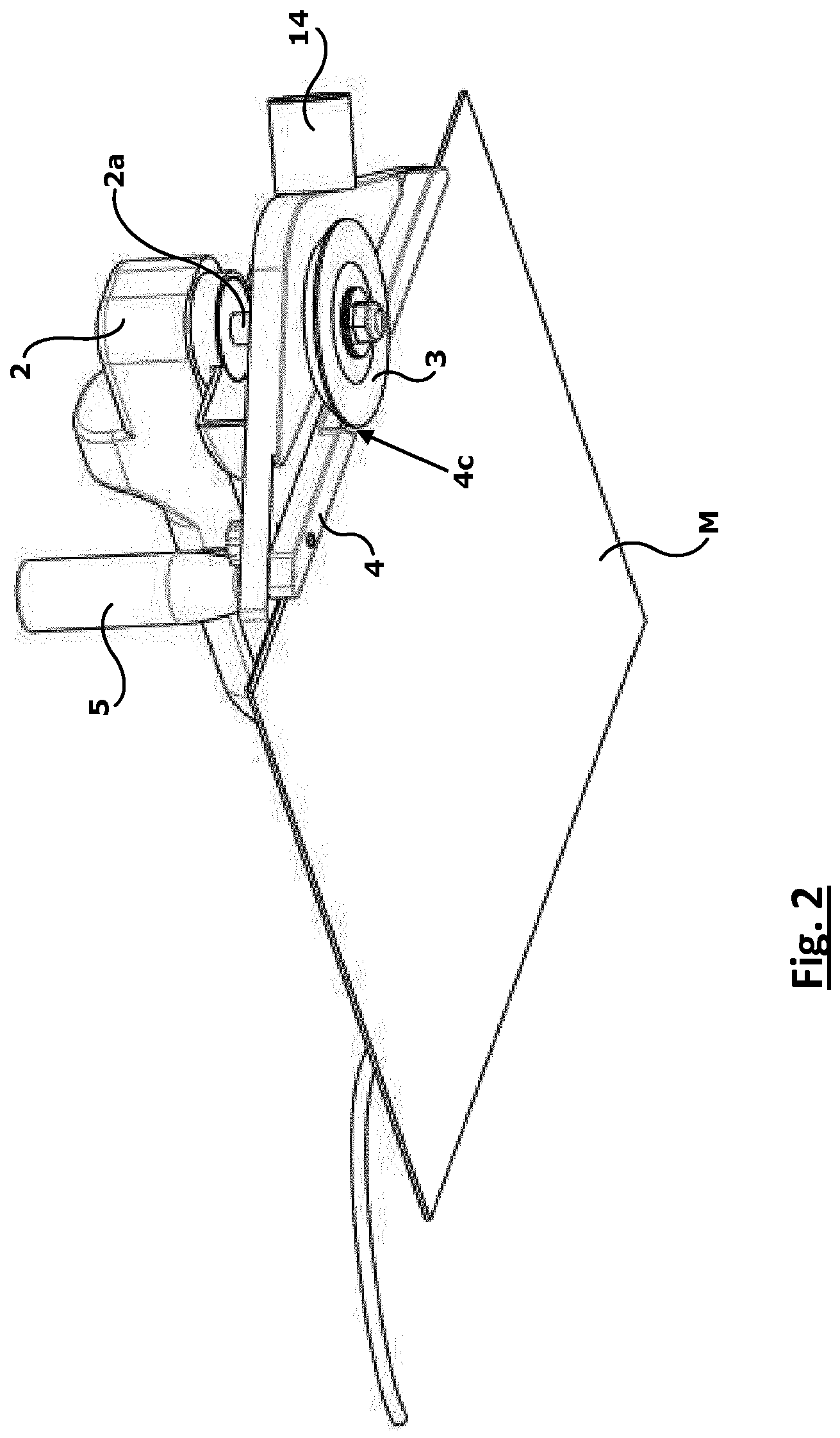 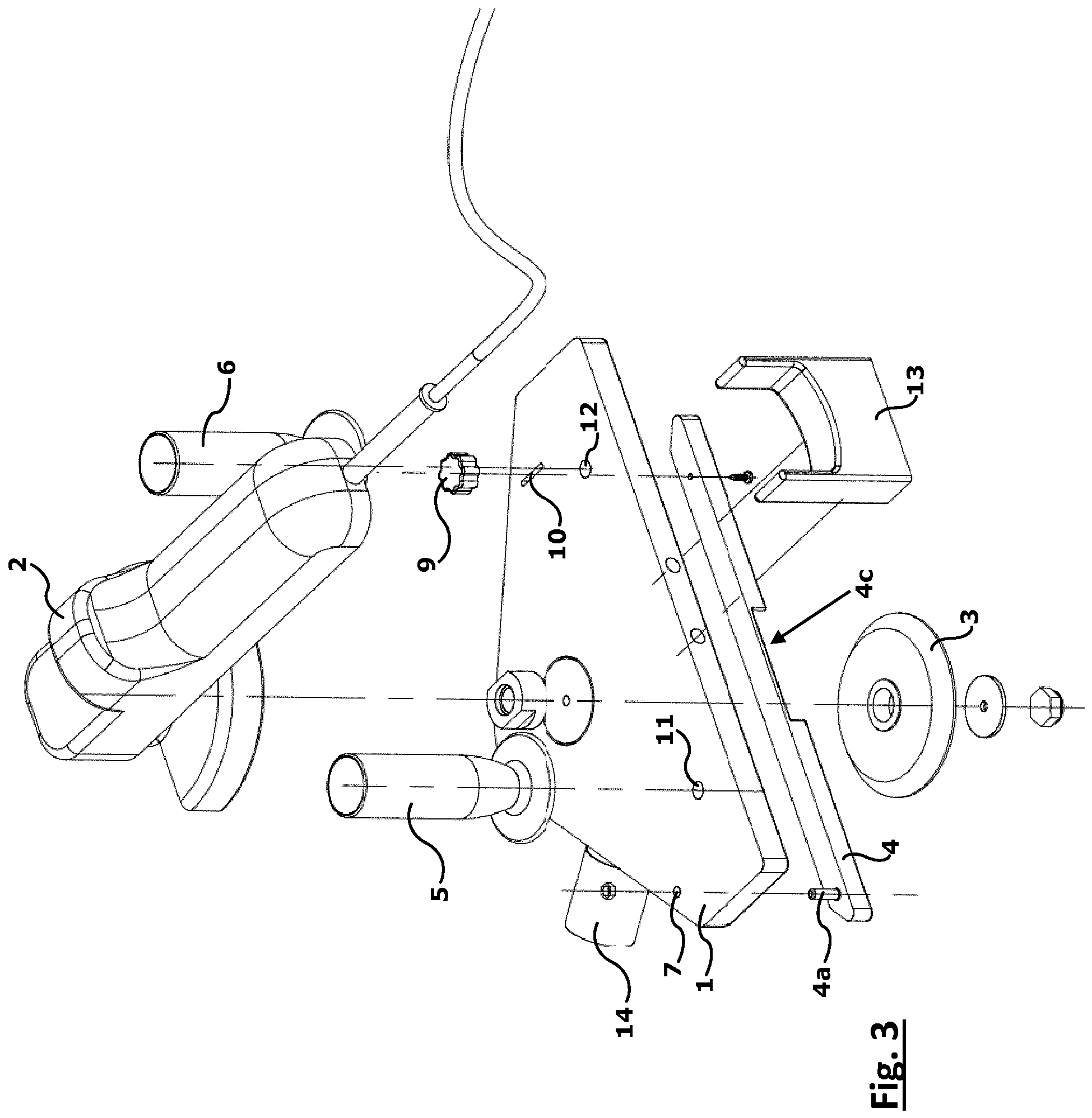 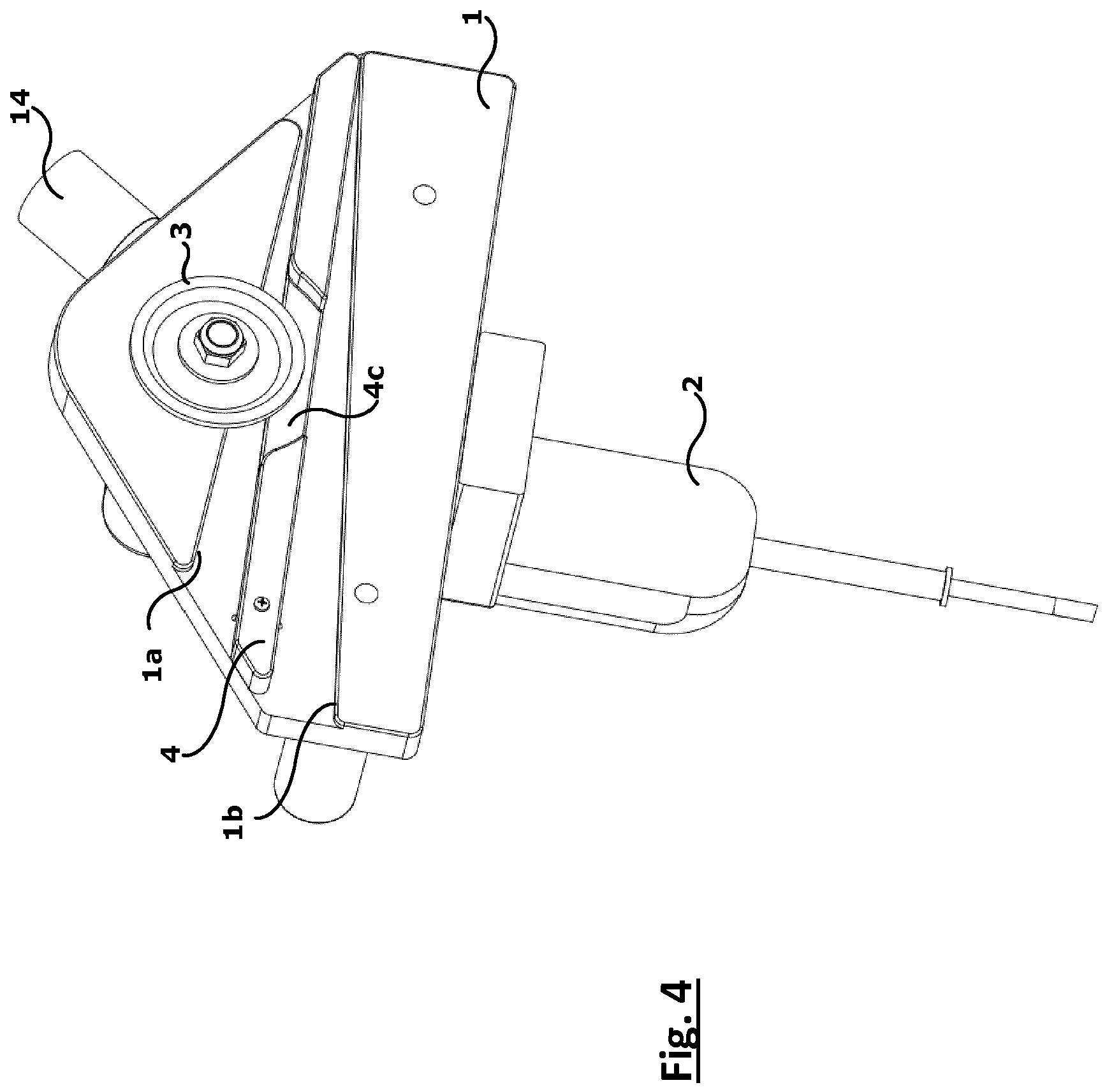