[0002] Human dermis is a layer of skin between the epidermis and subcutaneous tissue. The epidermis, serves as a barrier to protect the body against microbial pathogens, oxidant stress (UV light), water loss and chemical compounds, and provides mechanical resistance. The subcutaneous tissue consists of connective tissue and functions as a cushion for the body from stress and strain. The dermis is tightly connected to the epidermis through a basement membrane. Structural components of the dermis are collagen, elastic fibers, glycosaminoglycan, and extra fibrillar matrix. The glycosaminoglycan, e.g. hyaluronan, has multiple functions such as, to ensure good hydration, to assist in the organization of the extracellular matrix (ECM), to act as a filler material, and to participate in tissue repair mechanisms. The extracellular matrix plays an important role in skin aging: in young skin, the collagen fibers form a three-dimensional network. The fibroblasts bind to collagen fibrils via multiple contact sites (integrins) on their surface. This binding builds up a tensile stress, which balances the synthesis of collagen and collagen-degrading matrix-metalloproteins in the fibroblasts. In aged skin, the structure of the extracellular matrix is damaged by collagen breakdown - partial fragmentation of the collagen.
[0003] Skin aging is a progressive phenomenon, occurs over time and can be affected by lifestyle factors, such as alcohol consumption, tobacco and sun exposure. *Aging of the facial skin can be characterized by atrophy, slackening, and fattening. Atrophy corresponds to a massive reduction of the thickness of skin tissue. Slackening of the subcutaneous tissues leads to an excess of skin and ptosis and leads to the appearance of drooping cheeks and eye lids. Fattening refers to an increase in excess weight by swelling of the bottom of the face and neck. These changes are typically associated with dryness, loss of elasticity, and rough texture.
[0004] To improve cell function of skin, there are two main approaches: one is to supply skin cells with essential building blocks through oral nutrition and supplements or topical creams and serums or vigorous daily exercise to increase blood-flow and encourage the lymphatic system; the other approach relates to optimizing release of growth factors, i.e. substances that cause cells to differentiate, proliferate and/or grow, and cytokines which signal molecules released by cells to communicate with other cells. However, applying active ingredients topically to skin in order to improve cell function has generally not been highly effective, likely due to the impermeable nature of stratum corneum and other superficial layers of the epidermis.
[0005] Non-invasive or low-invasive techniques and devices for facilitating delivery of beneficial agents into skin have been proposed. For example, microneedle devices have been used to create numerous shallow punctures in the dermis, with the goal of enabling better penetration of topical compositions into the punctured skin. Such microneedle devices are used to perforate the skin and topical compositions are then sometimes applied to the punctured skin. Patent document WO 2014/041531 discloses delivery devices and methods for skin augmentation.
[0006] There remains an unmet need for better methods, devices and treatments for improving skin conditions, for example, in order to optimize skin health and improve outward appearance.

[0014] The present invention may be more readily understood and/or the advantages thereof better appreciated by considering the following Detailed Description and accompanying drawings of which:

Figure 1 shows an SEM image of a portion of a PRIOR ART microneedle device;

Figures 2a-2c illustrate, in simplified form, the mechanism of action of the PRIOR ART microneedle device shown in Figure 1;

Figures 3a-3c illustrate, in simplified form, a mechanism of action of a microneedle device of an embodiment of the present invention;

Figure 4 shows a balloon representing skin, being pressed against an array of nails representing a PRIOR ART microneedle array;

Figures 5a and 5b show, in simplified form, an array of microneedles in some embodiments of the invention, and penetration of skin thereby;

Figures 6a and 6b show, in simplified form, an array of microneedles in other embodiments of the invention, and penetration of skin thereby;

Figure 7 shows yet another embodiment of the invention;

Figure 8 illustrates an assembly in accordance with some embodiments of the invention, useful for treating skin using layered microneedle devices;

Figures 9 and 10 illustrate, in simplified form, embodiments of the invention using negative pressure to enhance effectiveness of the present invention; and

Figures 11, 12 and 13 illustrate yet other embodiments of the invention. 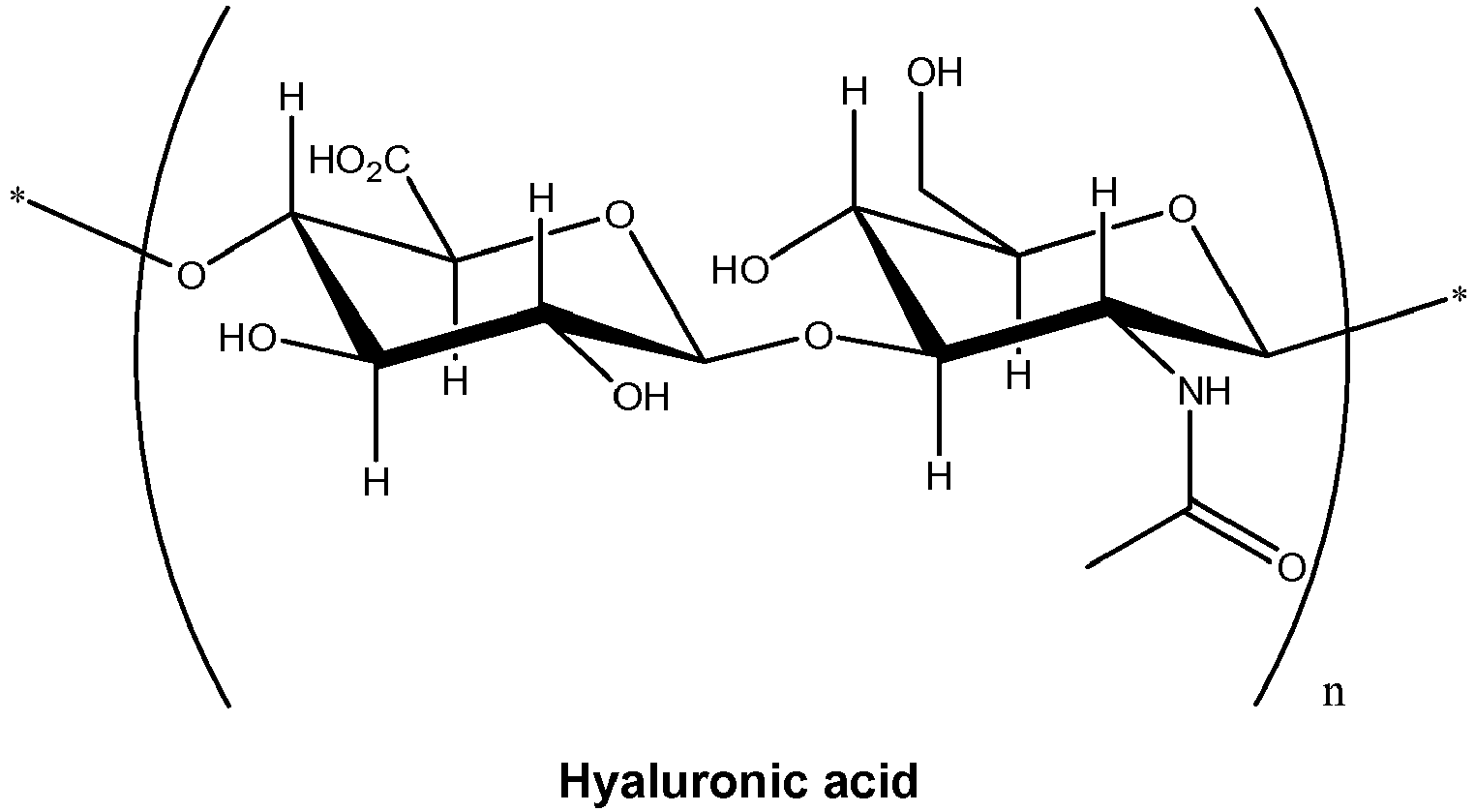 Preparation of Microneedle Device in accordance with an embodiment, using Hyaluronic Acid (HA)

[0055] Preparation of HA gel hydrate: HA gel hydrates were made by hydrating low molecular weight (LMW) HA (Mw is about 340,000 to about 840,000 Da) in deionized (DI) water or phosphate buffered saline (PBS). For a 12 wt% of LMW HA, approximately 1.20 g of LMW HA and 8.80 g of DI water were mixed in a 20 mL syringe. The mixture was left at room temperature for 24 hours to achieve a uniform hydrogel. The gel was then transferred to a 1.0 mL syringes and centrifuged at 4000 rpm for 5.0 min.
[0056] HA gel casting: The casting of HA gel includes two steps, casting and pre-concentrating. In the casting step, HA gel was cast on the negative silicone microneedle mold and upon evaporation of water at room temperature or in an oven, the solution formed a viscous paste on the top of the mold. For example, 0.65 mL of a 12 wt% HA gel was cast onto the center of the negative silicone mold. The gel together with the silicone mold was placed into an oven which was pre-set at 40 °C. After 1.50 hours of incubation, the gel formed a paste and was removed from the oven for the compression step.
[0057] Pressing and post-incubation: The HA paste together with the negative silicone microneedle mold was placed on a compressor. A PTFE film was placed on top of the HA paste. The compression pressure was set to 20 psi initially, then increased to 50 psi at a constant rate over a period of 30 seconds and held at this pressure for another 30 seconds.
[0058] Needle formation: After pressing, the PTFE film was removed and a flat layer of HA remained on top of the mold. The mold was then placed into a 40 °C oven for 2.5 hours. The dried micro-needle batch was then removed from the mold and sent for characterizations by SEM and x-ray CT.

4. The non-therapeutic method of claims 1 or 3 or the device for use of claims 2-3, wherein the beneficial agent is selected from vitamins, antioxidants, skin-whitening agents, peptides and growth factors.

5. The non-therapeutic method of claims 1 or 3-4 or the device for use of claims 2-4, wherein the vitamins are selected from the group consisting of Vitamin A, Vitamin B and Vitamin C.

6. The non-therapeutic method of claims 1 or 3-5 or the device for use of claims 2-5, wherein the first and second dried gel microneedles have a length of between 200 µm and 600 µm.

8. The non-therapeutic method of claims 1 or 3-7 or the device for use of claims 2-7, wherein the arrangement is in the form of an array in which the first and second dissolvable microneedles are arranged in an alternating fashion. 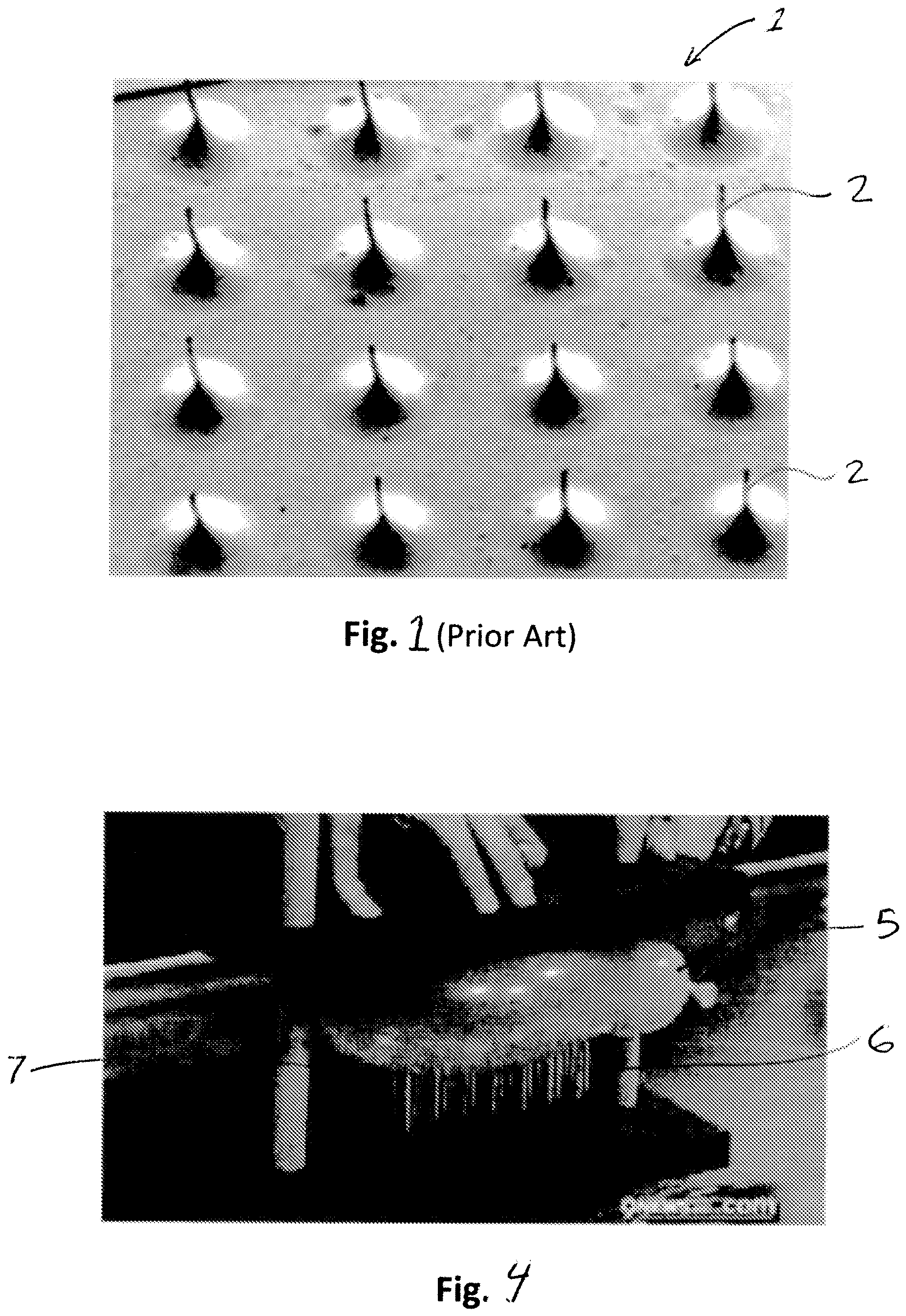 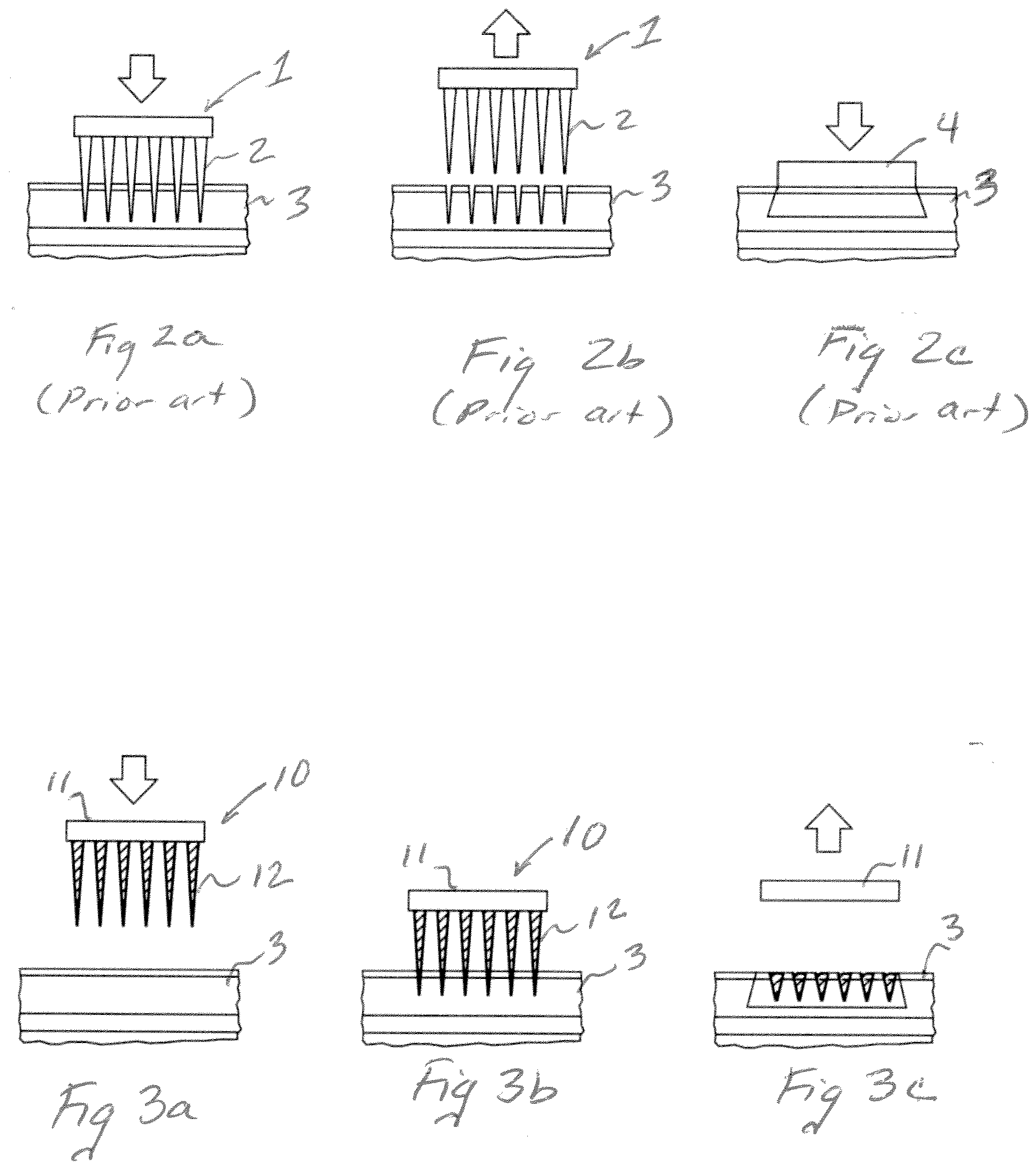 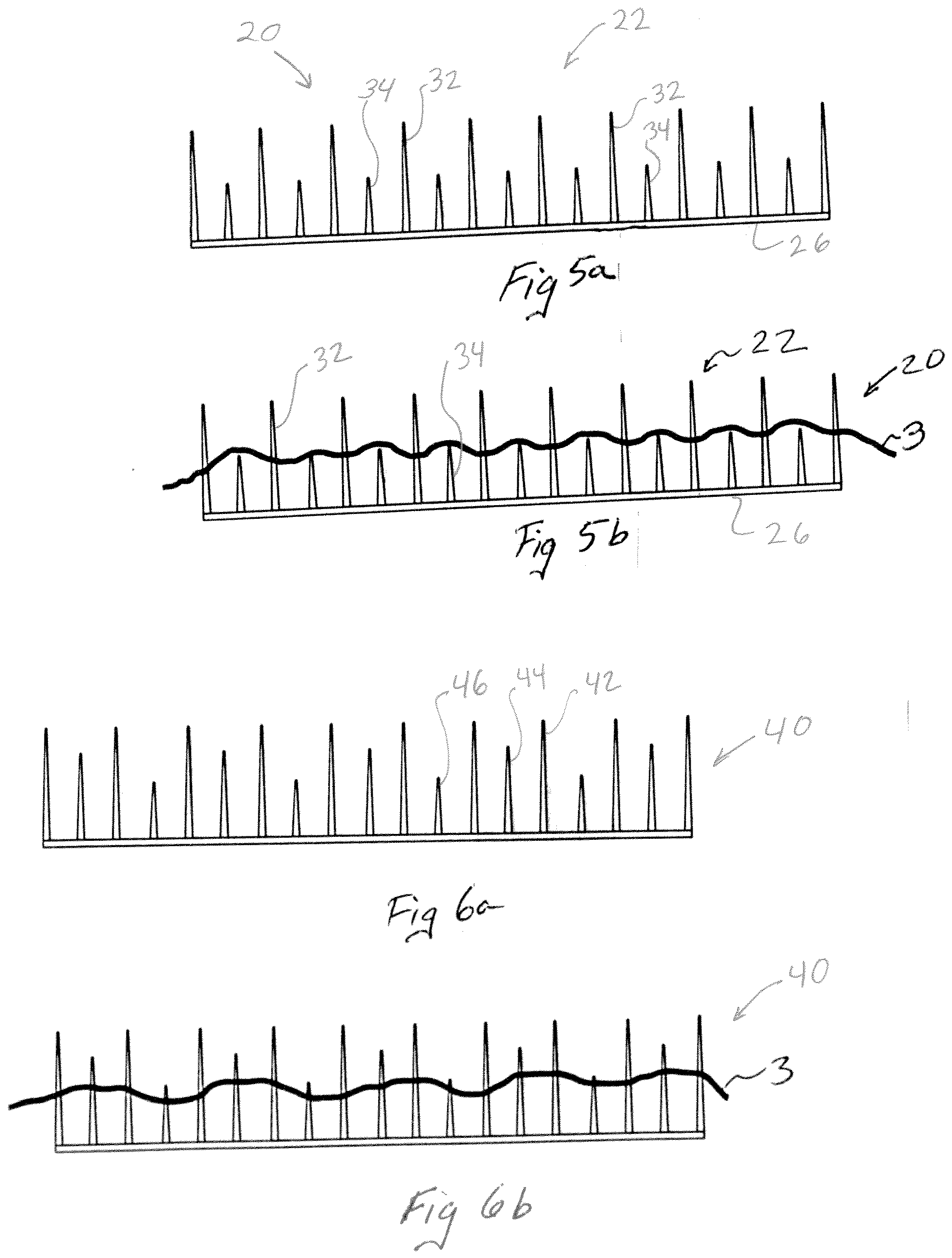 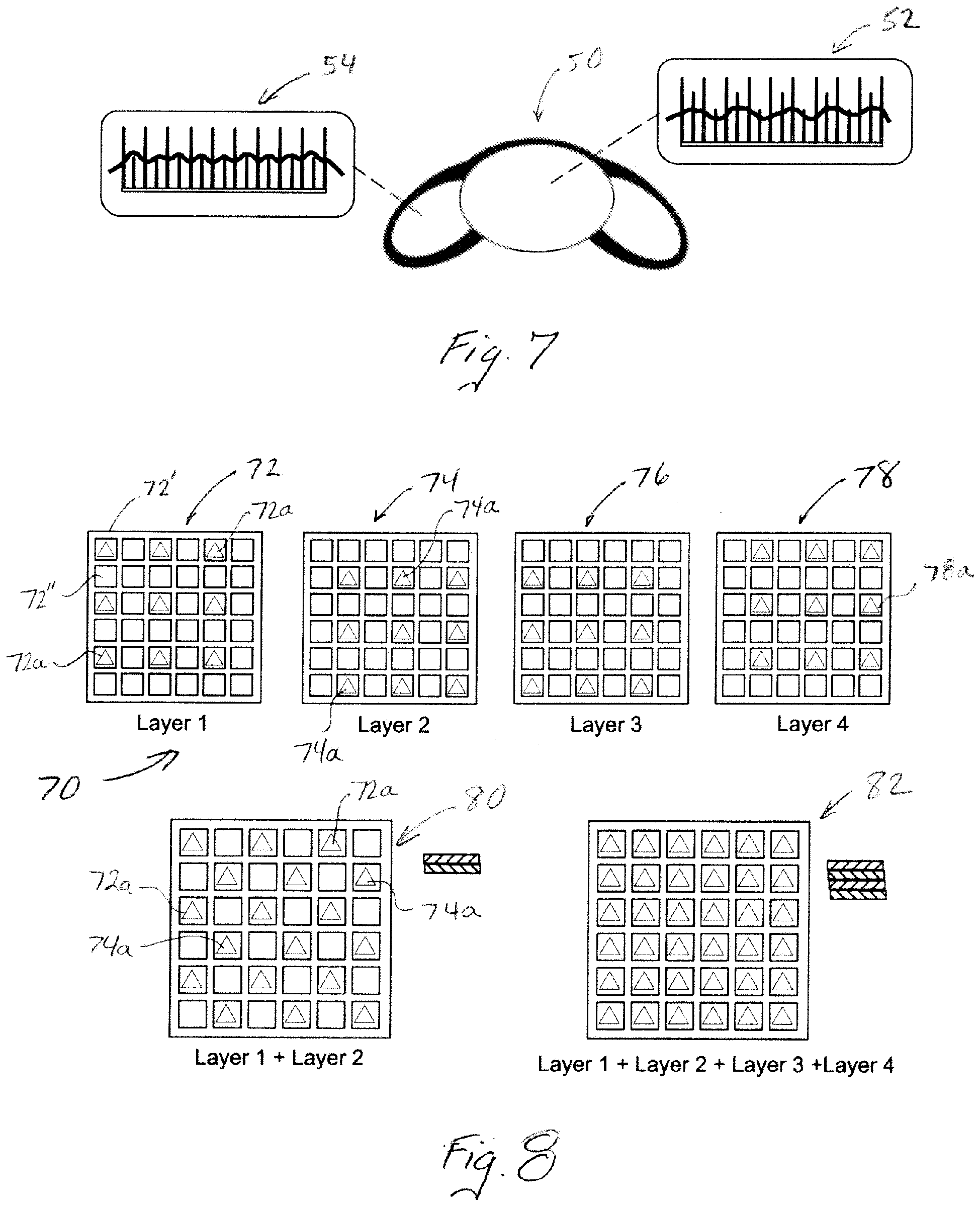 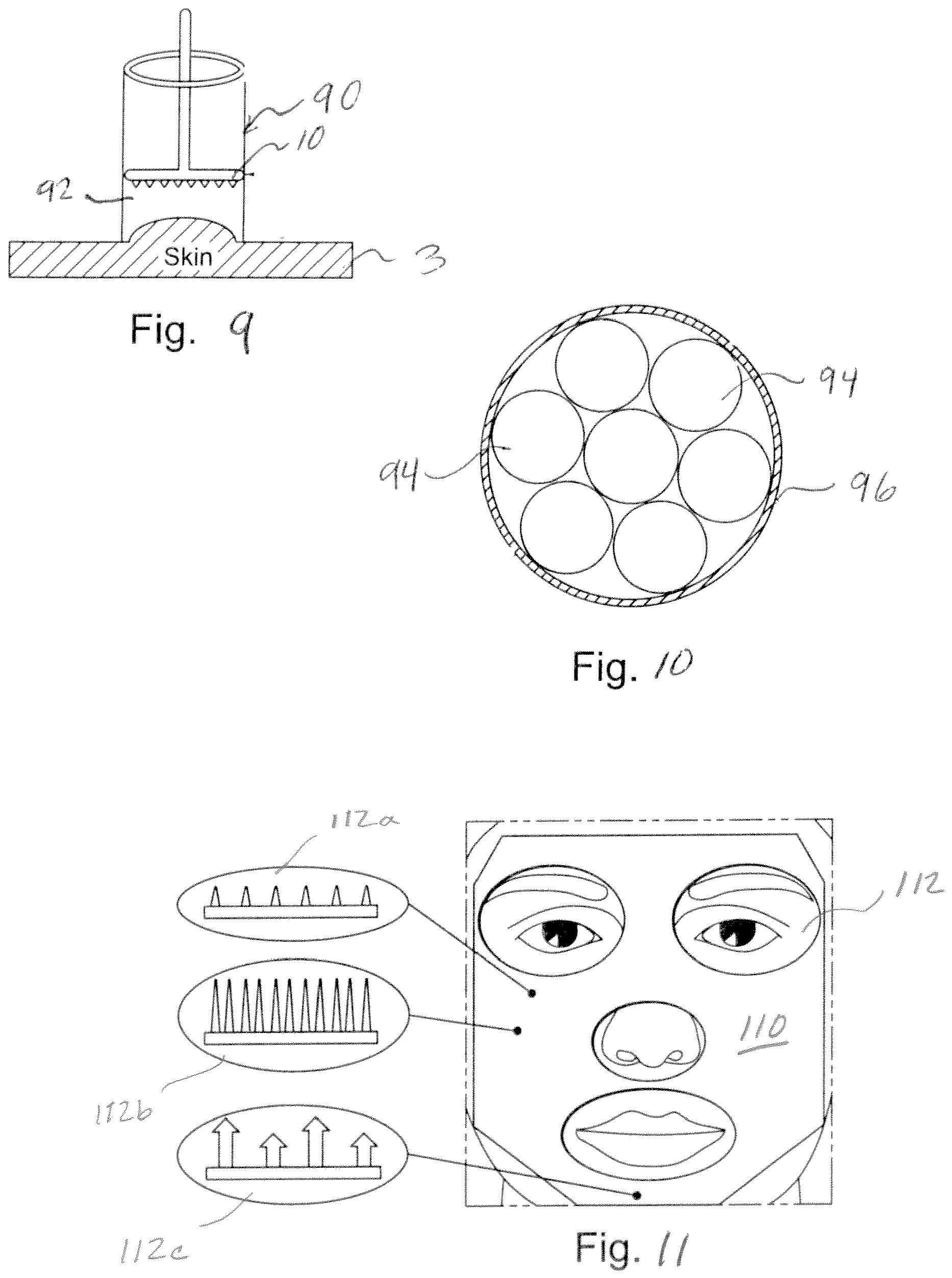 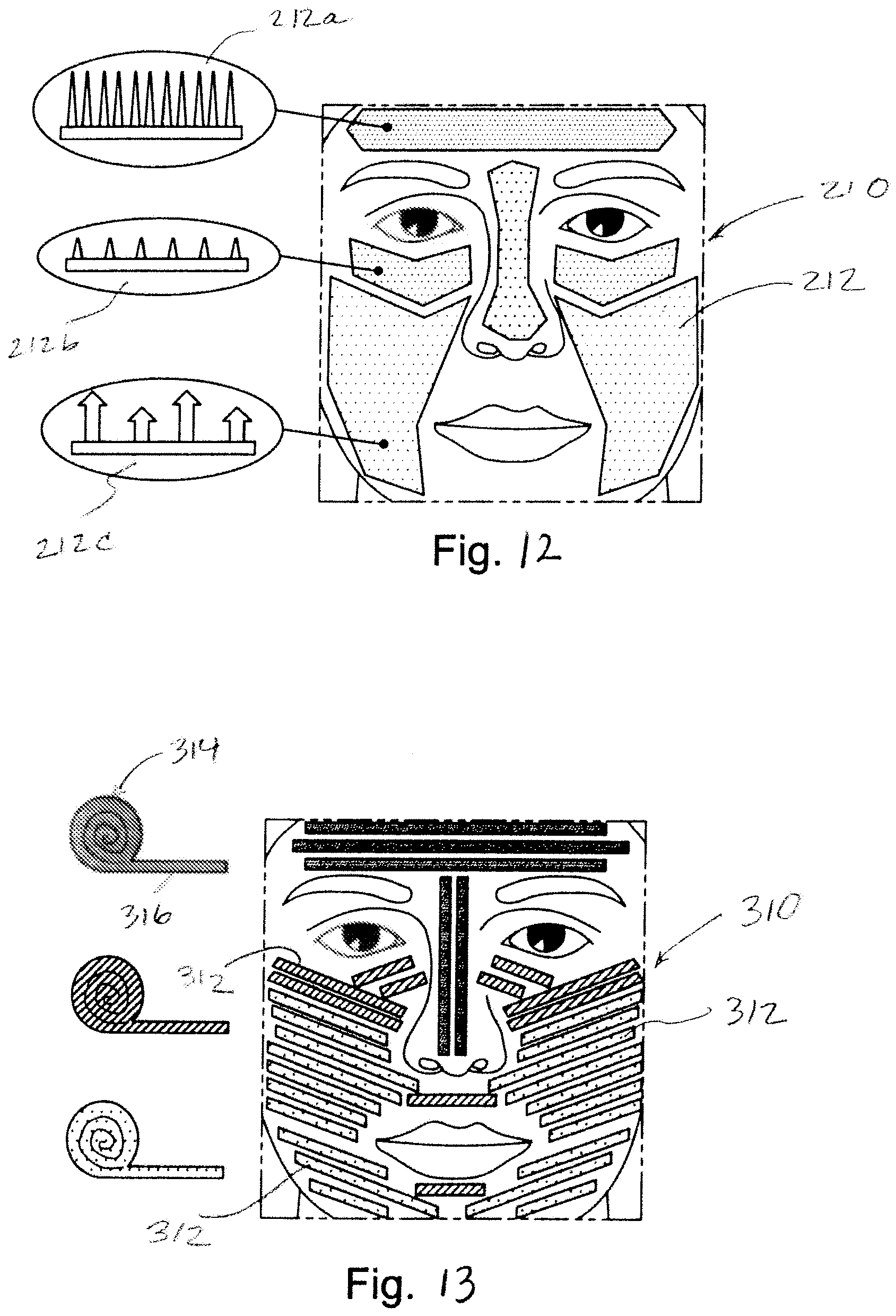