[0001] The invention relates to a fiber structure. The filter media of the invention can act as a reactive, adsorptive or absorptive layer or in a filtration mode. The structure comprises a collection fiber and particulate that also acts as a spacer means.

[0002] Polymer webs can be made by extrusion, melt spinning, air laid and wet laid processing, etc. The manufacturing technology of filter structures is vast for obtaining structures that can separate the particulate load from a mobile fluid stream. Such filtration media include surface loading media and depth media in which these media can be produced in a variety of geometric structures. Principles relating to the use of such media are described in Kahlbaugh et al., U.S. Patent Nos. 5,082,476; 5,238,474; 5,364,456 and 5,672,399. In any filter structure containing any arbitrarily selected filtration medium, the filter must remove a defined particle size, and at the same time, have sufficient lifetime to be economically justifiable in its particulate removing properties. Lifetime is generally considered to be the time between installation and the time a filter obtains sufficient particulate load such that the pressure drop across the filter is greater than a predetermined level. An increased pressure drop can cause filter bypass, mechanical filter failure, fluid starvation, or other operating problems. Filtration efficiency is the characteristic of the filtration media that is related to the fraction of the particulate removed from the mobile stream. Efficiency is typically measured by a set test protocol defined below.
[0003] Surface loading filter media often comprise dense mats of fiber having a non-woven structure that is placed across the path of a mobile fluid stream. While the mobile fluid stream passes through the structure of the formed non-woven fibers, the particulate is typically removed from the stream at the filter surface with a certain efficiency and remains on the surface. In contrast to surface loading structures, depth media typically include a relatively (compared to surface loading media) thick structure of fiber having a defined solidity, porosity, layer thickness and efficiency. Depth media and in particular, gradient density depth media are shown in Kahlbaugh et al., U.S. Patent Nos. 5,082,476; 5,238,474 and 5,364,456. In general, depth media act in filtration operations by impeding the particulate loading in a mobile fluid stream within the filter layer. As the particulates impinge the depth media fibrous structure, the particulate remains within the depth media and is typically distributed onto and held with internal fibers and throughout the filter volume. In contrast, surface loading media typically accumulate particulate in a surface layer.
[0004] Groeger et al., U.S. Patent No. 5,486,410, teach a fibrous structure typically made from a bicomponent, core/shell fiber, containing a particulate material. The particulate comprising an immobilized functional material held in the fiber structure. The functional material is designed to interact with and modify the fluid stream. Typical materials include silica, zeolite, alumina, molecular sieves, etc. that can either react with, or absorb materials, in the fluid stream. Markell et al., U.S. Patent No. 5,328,758, use a melt blown thermoplastic web and a sorbative material in the web for separation processing. Errede et al., U.S. Patent No. 4,460,642, teach a composite sheet of PTFE that is water swellable and contains hydrophilic absorptive particles. This sheet is useful as a wound dressing, as a material for absorbing and removing non-aqueous solvents, or as a separation chromatographic material. Kolpin et al., U.S. Patent No. 4,429,001, teach a sorbent sheet comprising a melt blown fiber containing super absorbent polymer particles. Deodorizing or air purifying filters are shown in, for example, Mitsutoshi et al., JP 7265640 and Eiichiro et al., JP 10165731.
[0005] Many mobile fluid phases, including both gas and liquid phases, contain undesirable components suspended, dissolved, or otherwise entrained within the mobile phase. Such undesirable components may be chemically reactive or may be absorbable or adsorbable through the use of absorbents or adsorbents. Often these species form a phase that is fully miscible in the fluid and cannot be filtered, but can be removed only by chemical reaction absorbents or adsorbents. Examples of such materials are acidic or basic reacting compounds. Acid compounds include hydrogen sulfide, sulfur dioxide and other such species basic components include ammonia, amines, quaternary compounds and others. Further reactive gases such as Cl2, SO2, cyanide, phosgene and others can pose hazards. Lastly, a number of other compounds are objectionable due to odor, color or other undesirable properties. The removal of all such materials from a fluid phase, if possible, can be helpful in many end uses. The active layers of existing systems suffer from problems relating to the mechanical instability of the particulate in the layers. In many structures the particulate is not mechanically fixed in the layer and can be dislodged easily. In many structures, the amount of active materials available is limited by the nature of the substrate and the amounts of active material that can be loaded.
[0006] While both surface loading media and depth media have been used in the past and have obtained certain levels of performance, a substantial need remains in the industry for fluid phase treatment and filtration media that can provide new and different performance characteristics than formerly obtained. In particular, a need for improved efficiency, low-pressure drop and excellent adsorptive, absorptive, or reactive properties are needed in a structure with high activity and robust mechanical stability.
[0007] WO 03/013732 describes a filter media comprising a support and a fibre web with fibres having a diameter from 0.1 to 2 micrometers. On the fibres adsorptive particles may be positioned.

Figures 1A and 1B shows an end view of an element in which the element comprises layers of active media combined with layers of inactive media to provide a flow channel to regulate efficiency and activity.

Figure 2 is an end view of a spiral wound media that has a chemical filtration media wound with a plastic mesh screen for spacing the layers. Such a structure is a flow by structure having little or no filtration properties but having substantial reactive adsorptive or reactive capacity.

Figure 4A and B are graphical representation apparatus that can be used to form the fine fiber layers for use in the invention by combining particle deposition with electrospinning of the fine fiber from polymer solution.

Figures 5 and 6 are a test apparatus and test results for the removal of a toluene test contaminant in air using a element of the disclosure.

Figure 7 shows the performance of a high surface area coconut shell carbon placed within the web of our fine fiber matrix in accelerated breakthrough test.

Detailed Discussion of the Invention

[0043] In the equation presented above, ΔP is the pressure drop across the media and the unit used in the equation is cm Hg; media face velocity has the unit of cm/see; Ln(penetration) is the natural logarithm of penetration. And penetration is defined as:

[0083] A thermoplastic aliphatic polyurethane compound manufactured by Noveon®, TECOPHILIC SP-80A-150 TPU was used. The polymer is a polyether polyurethane made by reacting dicyclohexylmethane 4,4'-diisocyanate with a polyol.

a fine fiber; and

a spacer particulate which is an expandable microsphere,

wherein the spacer particulate is dispersed throughout the fine fiber web. 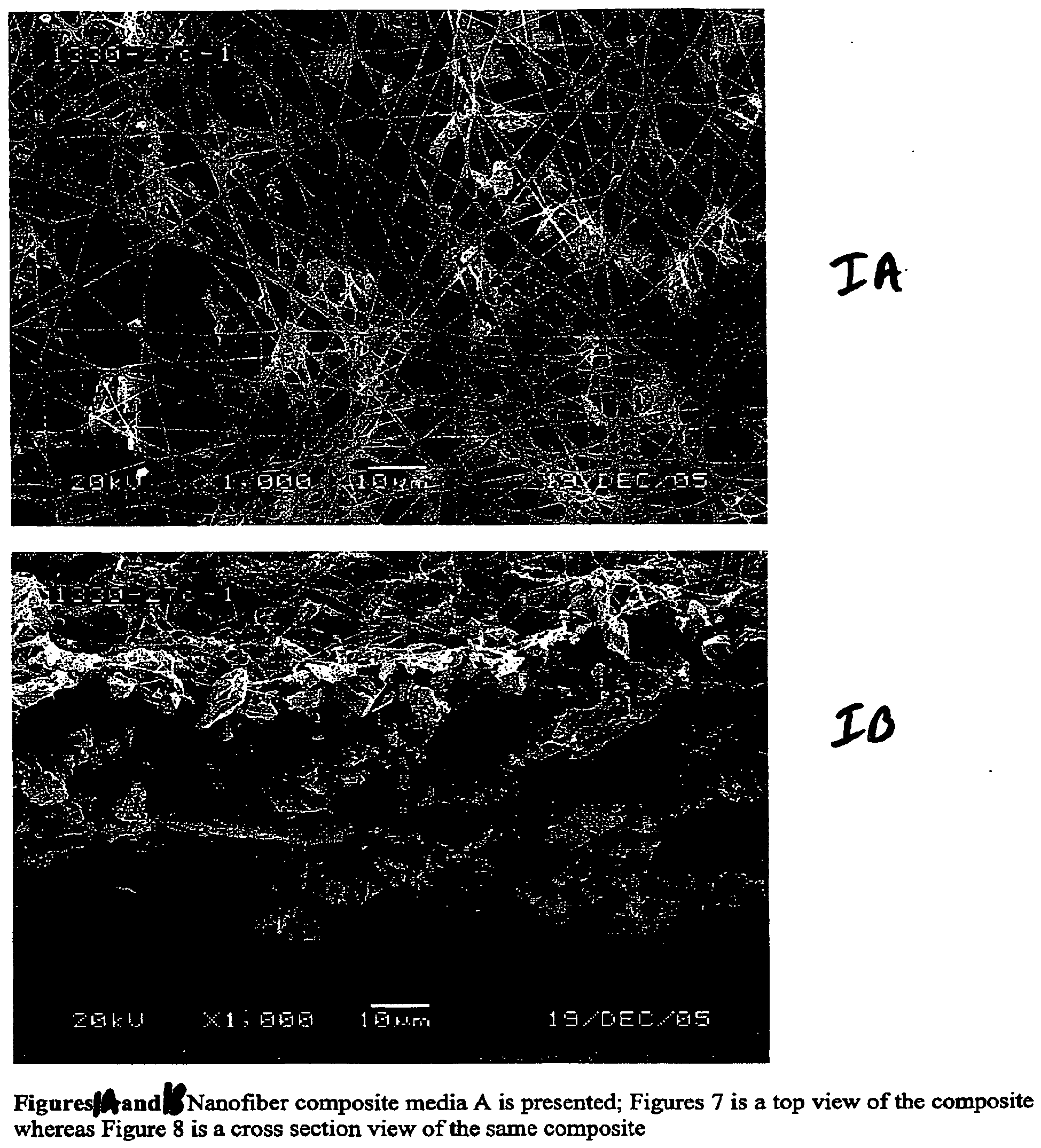 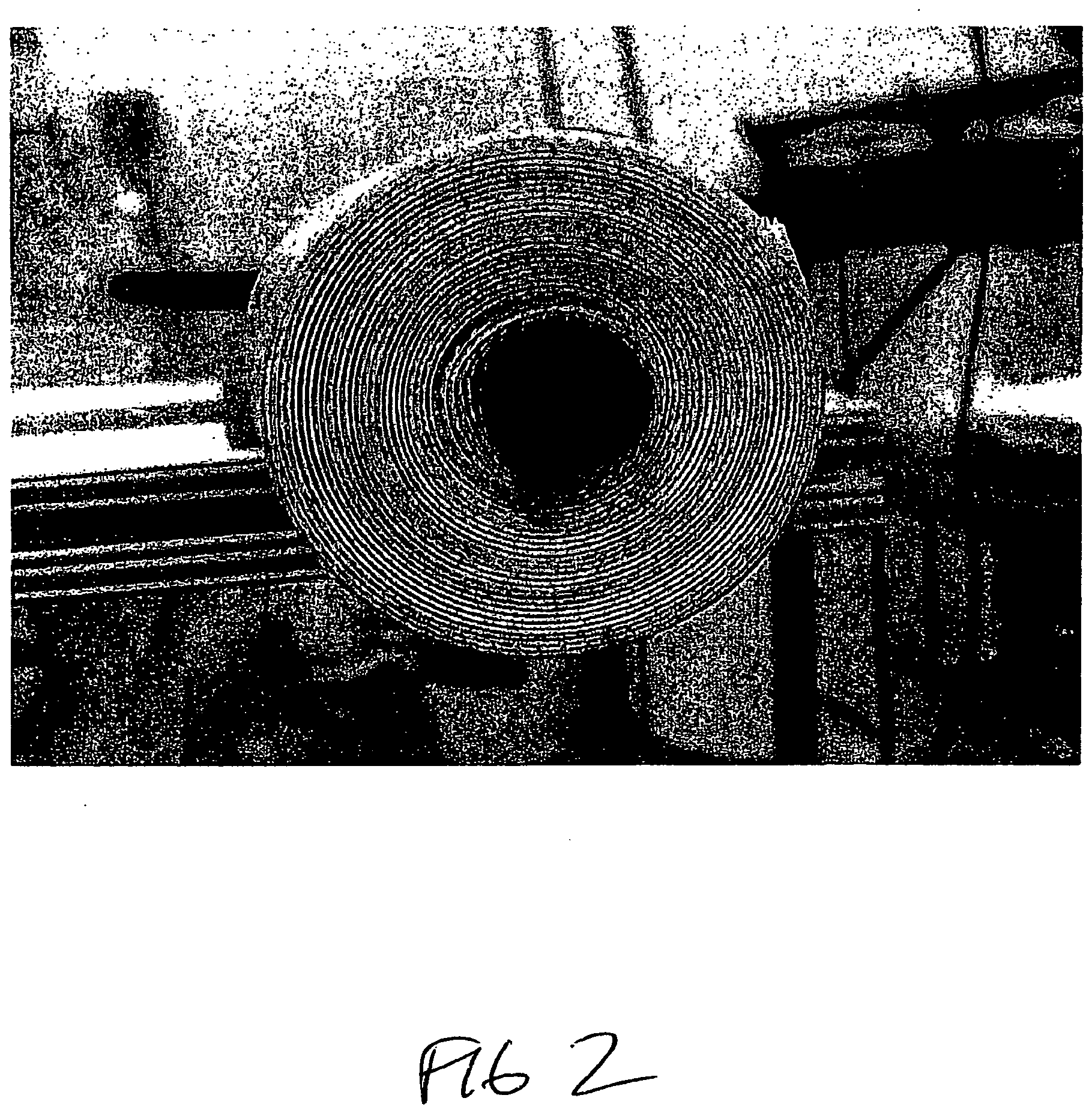 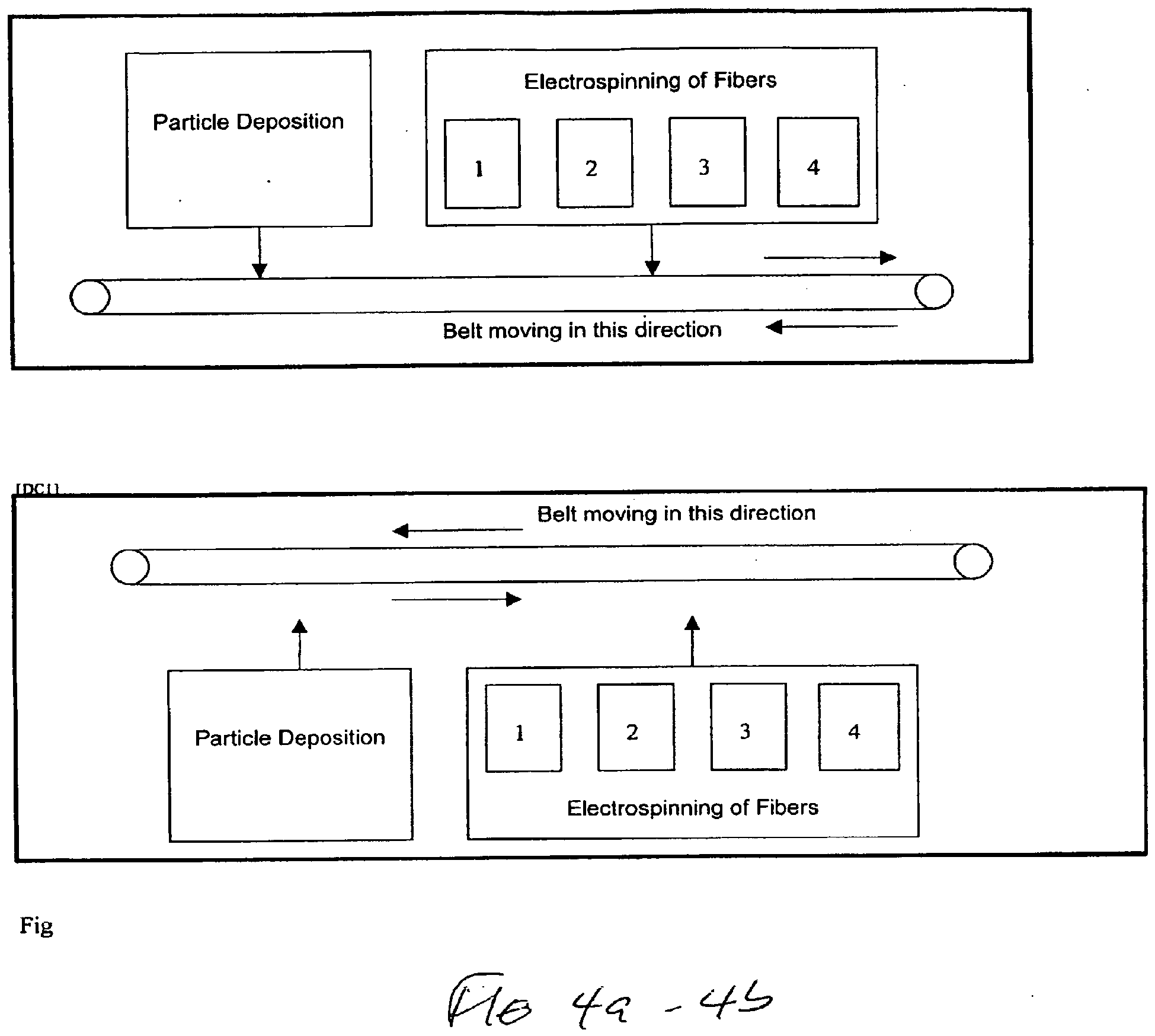 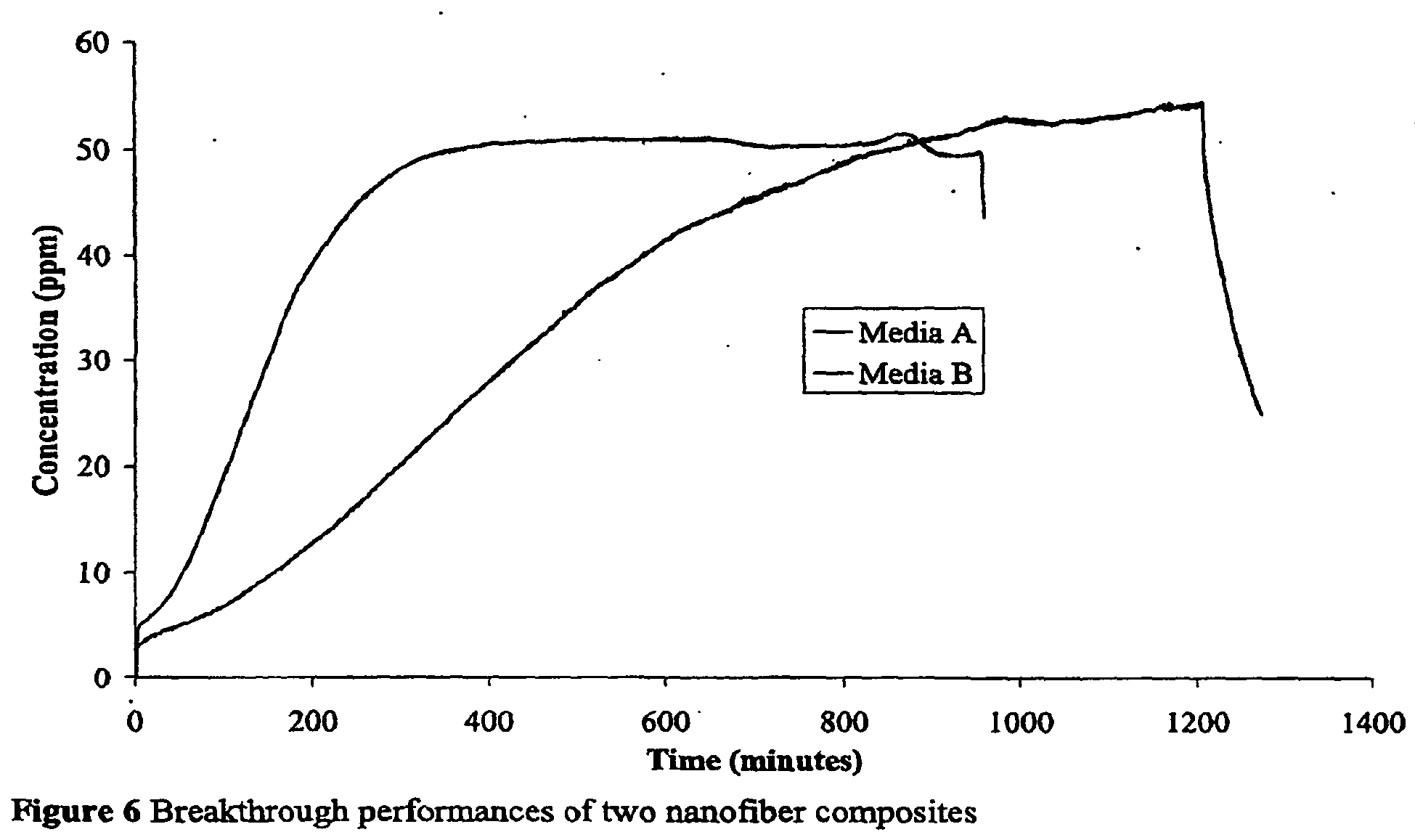 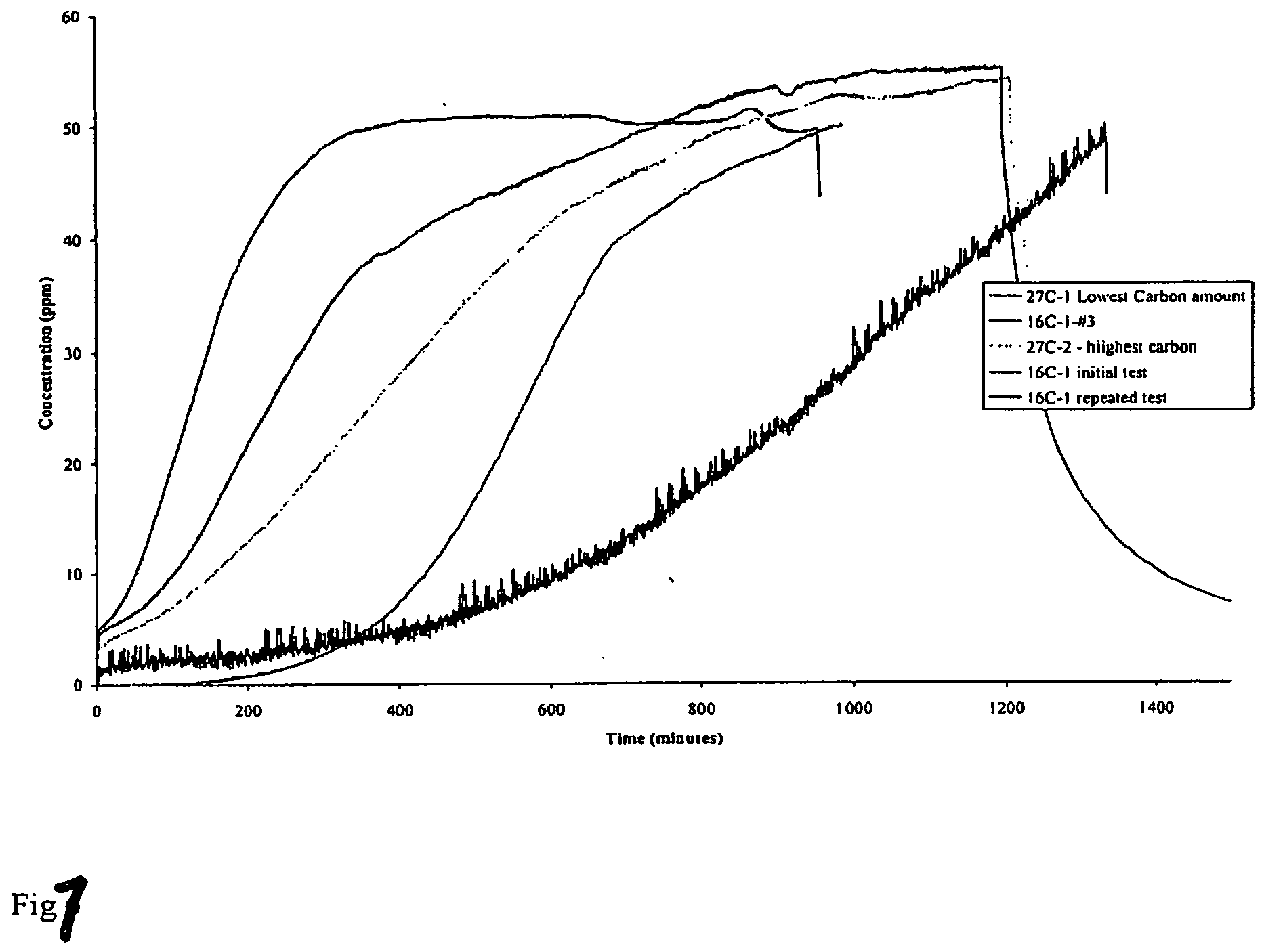