[0001] The present invention relates to pneumatically operated power tools, and more specifically to systems for jobsite operation of pneumatically powered fastener drivers, also referred to as pneumatic nailers.
[0002] Conventional pneumatic nailers, such as those disclosed in US Patent No. 3,638,532 and US Patent Application Publication No. 2012/0223120-A1, are connected to a source of compressed air, typically a compressor, via an extended length hose. Per industry standards, the compressors are set at a maximum output of 8.27-8.61 bars (120-125 psi). In a conventional construction jobsite, where pneumatic nailers of this type are commonly used, the compressor hose can reach 60.96 meters (200 feet) in length. A major reason for the long hoses is that the users prefer to locate the compressor outside the residence or building where the construction work is being performed to reduce noise. A common drawback of such systems is that the nailer experiences a pressure drop over the length of the hose, such that a 7.58-8.96 bars (110-130 psi) regulated output at the compressor can drop to approximately 6.89-6.20 bars (100-90 psi) at the nailer. In conventional framing nailers driving nails into pine boards, the required pressure for fully driving the fastener is approximately 6.89-7.58 bars (100-110 psi). Thus, it is not uncommon for tools to incompletely drive the nails into the workpiece or substrate. The user then follows the nailer with a manual hammer for completing the fastener driving process. Thus, there is a desire on the part of users to avoid follow-up work with conventional hammers.
[0003] One attempted solution to the pressure drop at the nailer is to provide the nailer with a housing that stores a residual supply of compressed air to buffer or supplement the air provided by the compressor. In such tools, sufficient storage space is provided to retain approximately 25% more compressed air volume than is required to drive a single nail. While the additional storage space in the tool addresses the pressure required to completely drive a single nail, it is customary for the pressure delivered by a conventional nailer to decrease with subsequent fasteners driven in relatively close succession. For example, an initial fastener is driven at approximately 7.58 bars (110 psi) with the housing-stored pressure boost, the second at 6.89 bars (100 psi), the third at 6.55 bars (95 psi) and the fourth at 6.20 bars (90 psi). In such a scenario, the user often resorts to use of his hammer to complete the driving of the second through fourth fasteners, with more manual energy required as the nailer output decreases. In other cases, the users have been known to increase the output pressure of the compressor above the nailer's maximum pressure rating (approximately 9.65-10.34 bars (140-150 psi)), which can cause premature nailer wear, tool damage and/or failure.
[0004] A drawback of the enlarged tool housing, the conventional response to tool pressure drops described above, is that the tool is relatively heavy, at approximately 3.4-3.8 kg (7.5-8.5 pounds) for a framing-type tool. Pneumatic nailers are usually provided in two sizes, a relatively larger framing tool, and a relatively smaller trim tool. Another drawback of the conventional pneumatic nailer system described above is that the user encounters a physical drag on his efforts caused by the length and weight of the air supply hose, which at approximately 60.96 meters (200 feet), is cumbersome to manipulate on the jobsite.
[0005] A solution to the above-listed problem is addressed in copending, commonly assigned US Patent Application Serial No. 13/632,114, filed September 30, 2012. Basically, a pneumatic nailer system features a pneumatic nailer having a significantly reduced housing size, in that the overall tool is approximately 25-30% lighter than a standard pneumatic framing tool. A main source of the reduction in size is the elimination of extra compressed air storage volume within the tool housing. In the disclosed tool housing, there is only enough stored compressed air to power the driving of a single fastener. This differs from conventional framing tools, where the housing defines a buffer storage area to supplement the compressed air provided by the compressor, and for alleviating the typical pressure drop encountered when long hoses are used, and/or multiple tools are connected to a single compressor. Instead of in-tool compressed air storage, the disclosed system provides a supplemental air tank located between the compressor and the tool for providing a more consistent supply of compressed air located closer to the nailer that is less susceptible to pressure drops.
[0006] Another benefit of the disclosed pneumatic tool is that internal storage, swept and return volumes are dimensioned in a way that has been found to significantly increase the power of the disclosed tool relative to the size of the tool. With the disclosed tool and the supplemental air tank, the tool generates approximately 80 Joules of energy for each fastener driving cycle, even after multiple fasteners are driven, with a tool weighing approximately 2.7 kg (6 pounds). In other words, the disclosed tool drives successive fasteners at approximately 6.89 bars (100 psi) on a more consistent basis than conventional pneumatic framing nailers connected by a hose directly to a compressor.
[0007] However, an aspect of operation of the above-identified system is that the conventional pressure regulator is mounted to the supplemental air tank in a conventional orientation, using threaded pipe stem nipples. As such, the regulator is prone to impact damage inherent with the jobsite environment. In addition, operators have been able to access the regulator, making adjustments which in some cases interfere with desired system performance. Thus, there is a need for providing a pneumatic power system where the pressure regulator on the supplemental air tank is protected from damage as well as from unwanted adjustment or manipulation.
[0008] Background further includes US-A1-201/0090732 and EP-B1-1 625 916.

FIG. 1 is a side elevation of a pneumatic tool power system including a supplemental air tank in vertical cross-section suitable for use with the present embedded regulator; and

FIG. 2 is an enlarged vertical cross-section of the present regulator and associated components used to embed the regulator within the storage tank of FIG. 1.

1. A pneumatic power system (10) utilizing compressed air provided by a compressor (14), comprising:
a supplemental air tank (12) having an inlet port (20) and defining an internal cavity (44):

an embedding piece (46) engaged in said inlet port; and

characterized in that a regulator (40) is connected to said embedding piece for fluid connection to the compressor, said regulator being substantially enclosed within said cavity.

9. The power system (10) of claim 8 further including at least one nailer (16) connected to said supplemental air tank via an associated hose (70). 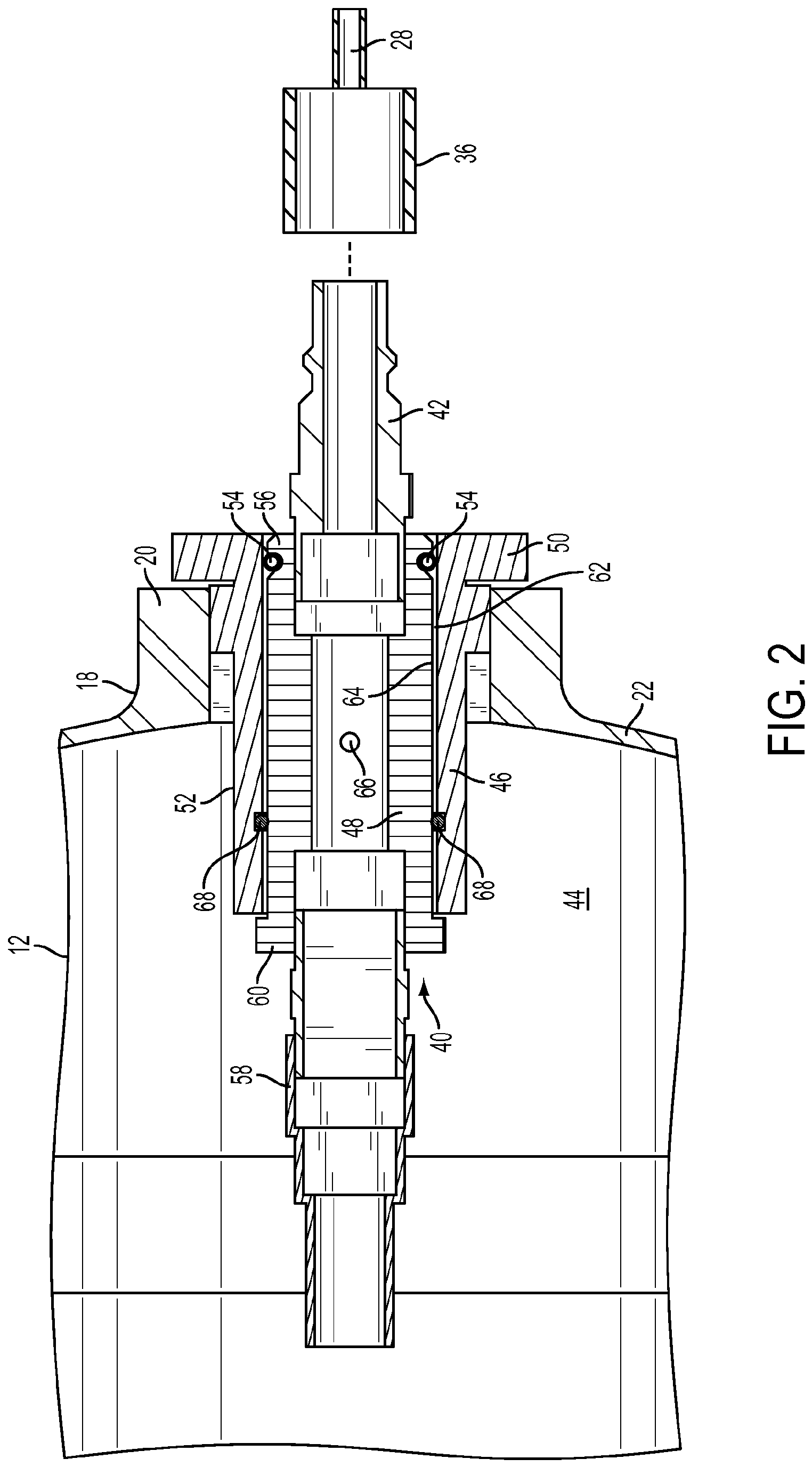