[0001] This invention generally pertains to a smart rechargeable battery pack with low power processor and a safety system to help provide for an extended shelf life.
[0002] Rechargeable batteries have become ubiquitous in today's world, being used in everything from cell phones and laptops to medical devices to airplanes. Often, it is desirable for a user to be kept apprised of how much charge is left in a battery powering a device. This may be especially true when devices are not used for an extended period of time, such as when they are being shipped or stored. However, monitoring the charge of a battery generally results in the charge being depleted.
[0003] Typically, the amount of power used to detect the remaining charge of a battery is small. For a device using a large battery pack, for example those rated greater than approximately 5 ampere-hours, the large battery pack may not be significantly drained from detecting the remaining charge. However, for a device that uses a small battery for general functioning, for example those rated at approximately 0.7 ampere-hours, the amount of power drawn by a circuit that monitors battery charge can result in a significant drain on the relatively small battery.
[0004] This problem is especially evident when the battery-powered device is not used for an extended period of time, such as when the device is being stored in inventory or shipped. As noted above, even though a device is not being used, power is being consumed from a battery pack to continually monitor the charge, inevitably leaving the battery drained. For devices in inventory, the need to recharge devices on a continual basis is expensive and work-intensive. For devices being shipped, recharging may be difficult, if not impossible.
[0005] Therefore, there is a need to provide a smart battery pack that includes a low power processor for monitoring the charge remaining on the battery pack. This would provide for better power management and increased battery life.
[0006] Document US 2008/0111520 A1 discloses a battery pack having a secondary battery; a measurement unit measuring a terminal voltage and a current of the secondary battery; a protection unit preventing the secondary battery from being overcharged when the terminal voltage measured by the measurement unit is equal to or higher than an overcharge detection voltage; and a control unit receiving the terminal voltage and current measured by the measurement unit, the control unit having a first mode and a second mode in which current is less consumed than the first mode.
[0007] US 2010/0085016 A1 discloses a method and apparatus for battery gauging in a portable terminal. In the battery gauging method, it is determined in a low-power mode whether a listening interval occurs for detecting the presence of a received signal. The remaining battery capacity is detected if the listening interval occurs. An interrupt signal is transmitted to the second processor, operating in a low-power mode, if the remaining battery capacity is less than or equal to a threshold. Upon receipt of the interrupt signal, the second processor wakes up to interrupt the power of the portable terminal.

wherein the digital processor is different than the low power processor.

[0012] In certain embodiments, the battery monitor circuit may switch from the normal operating state to the default safe state when the device detects a fault in the low power processor.
[0013] Determining the charge of the battery may further comprise detecting the charge of at least two batteries. Optionally, at least one of the two batteries may be removable from the device.
[0014] In certain embodiments, the method may further comprise displaying the determined charge on a display on the device.
[0015] The method may further comprise generating an alarm when the determined charge is below a threshold.
[0016] The method may further comprise displaying a fault message if the low power processor fails to wake-up.
[0017] This invention results in a very low power smart battery with full gauging capability with a very long shelf life (typically, greater than 12 months). Additionally, the invention lowers the rate of device failure, despite additional hardware, by including an additional safety mechanism that will ensure that the battery monitor circuit continues to operate despite a fault that might arise from the addition of new hardware in the device.

Fig. 1 is a conventional diagram of a ventricular assist system.

Fig. 2 is an exemplary embodiment of the ventricular assist system with a smart battery and power monitoring circuitry.

Fig. 3 is a diagram of the safety override architecture.

Fig. 4 is a diagram of the simplified battery architecture.

wherein the digital processor (92) is different than the low power processor (110). 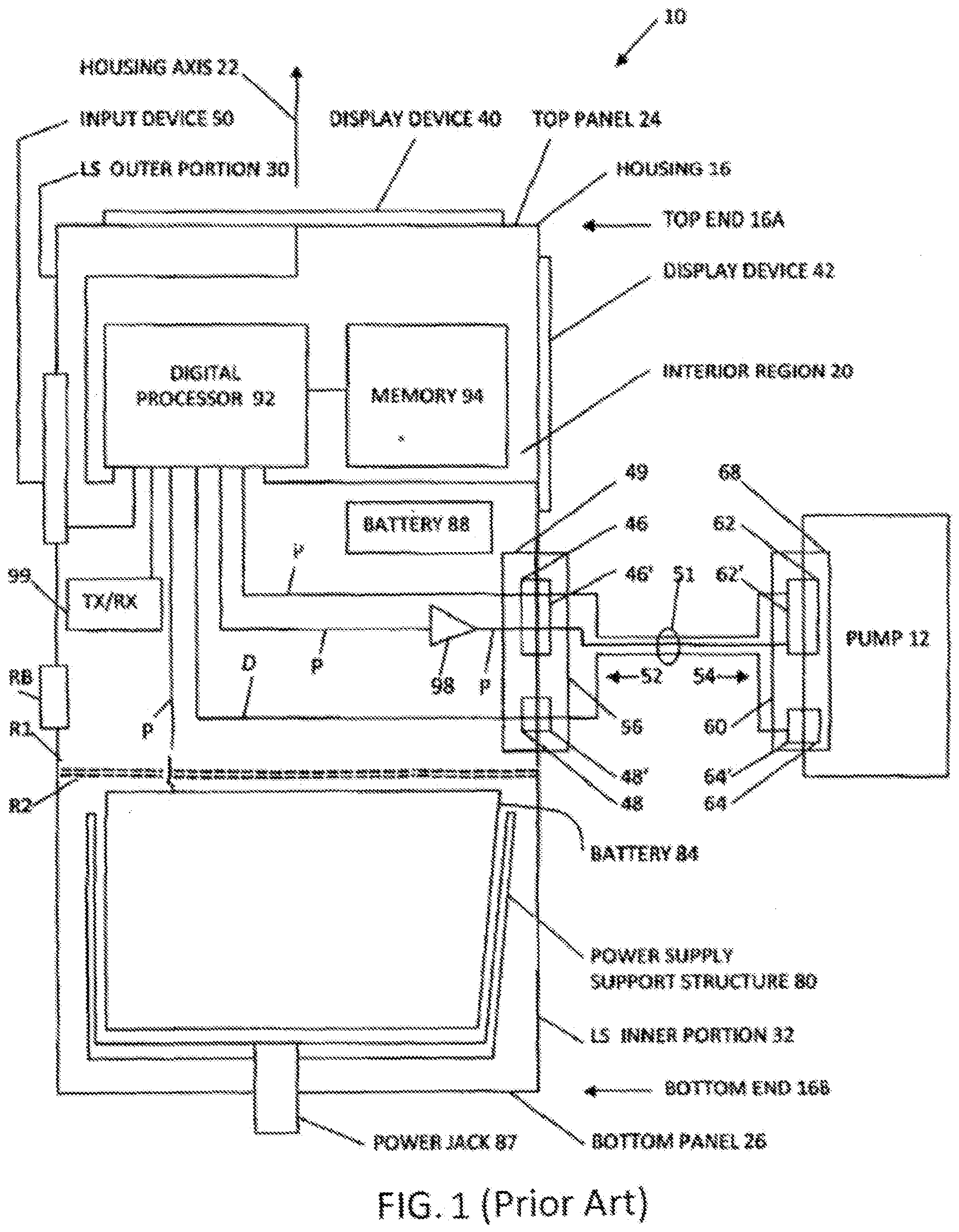 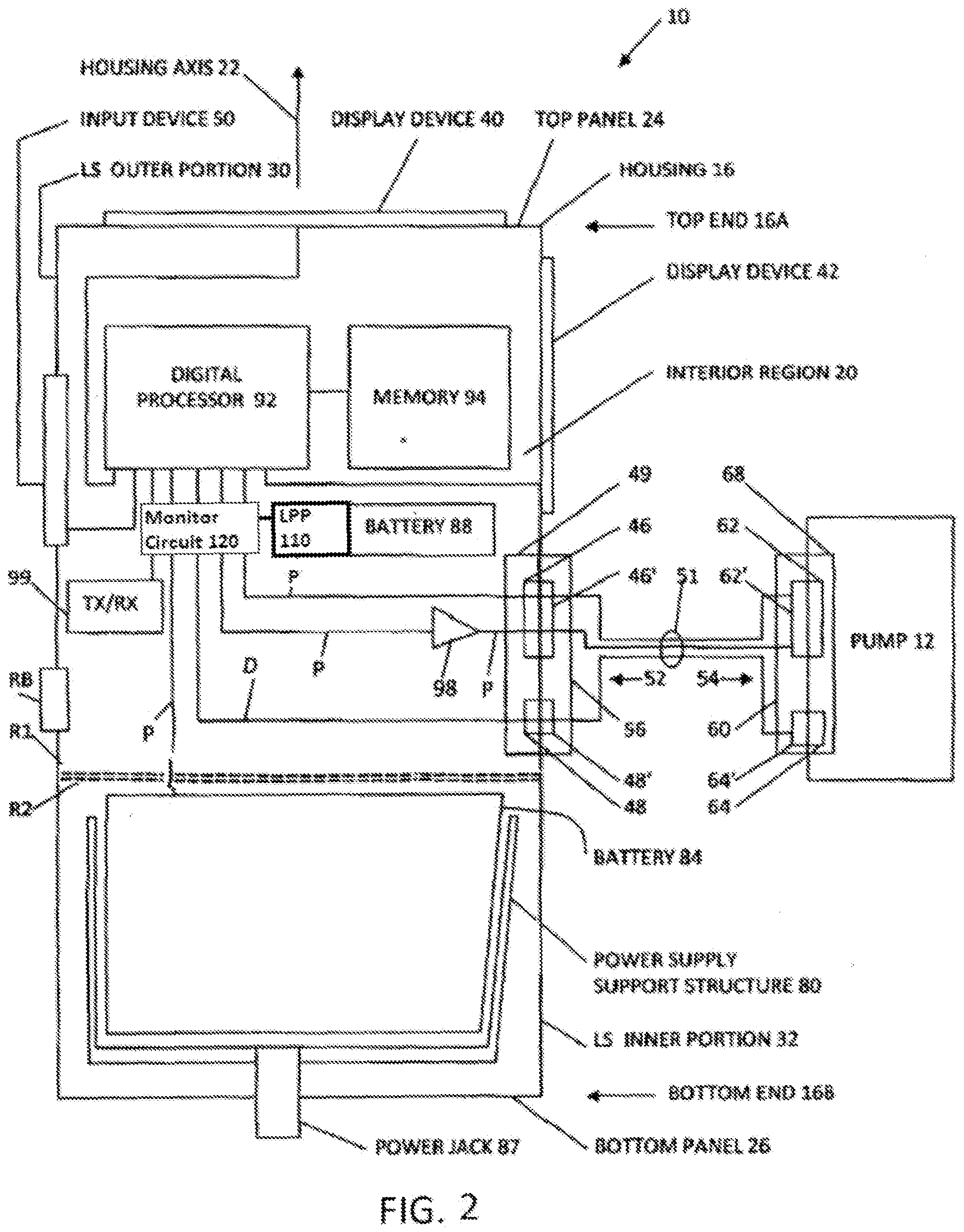 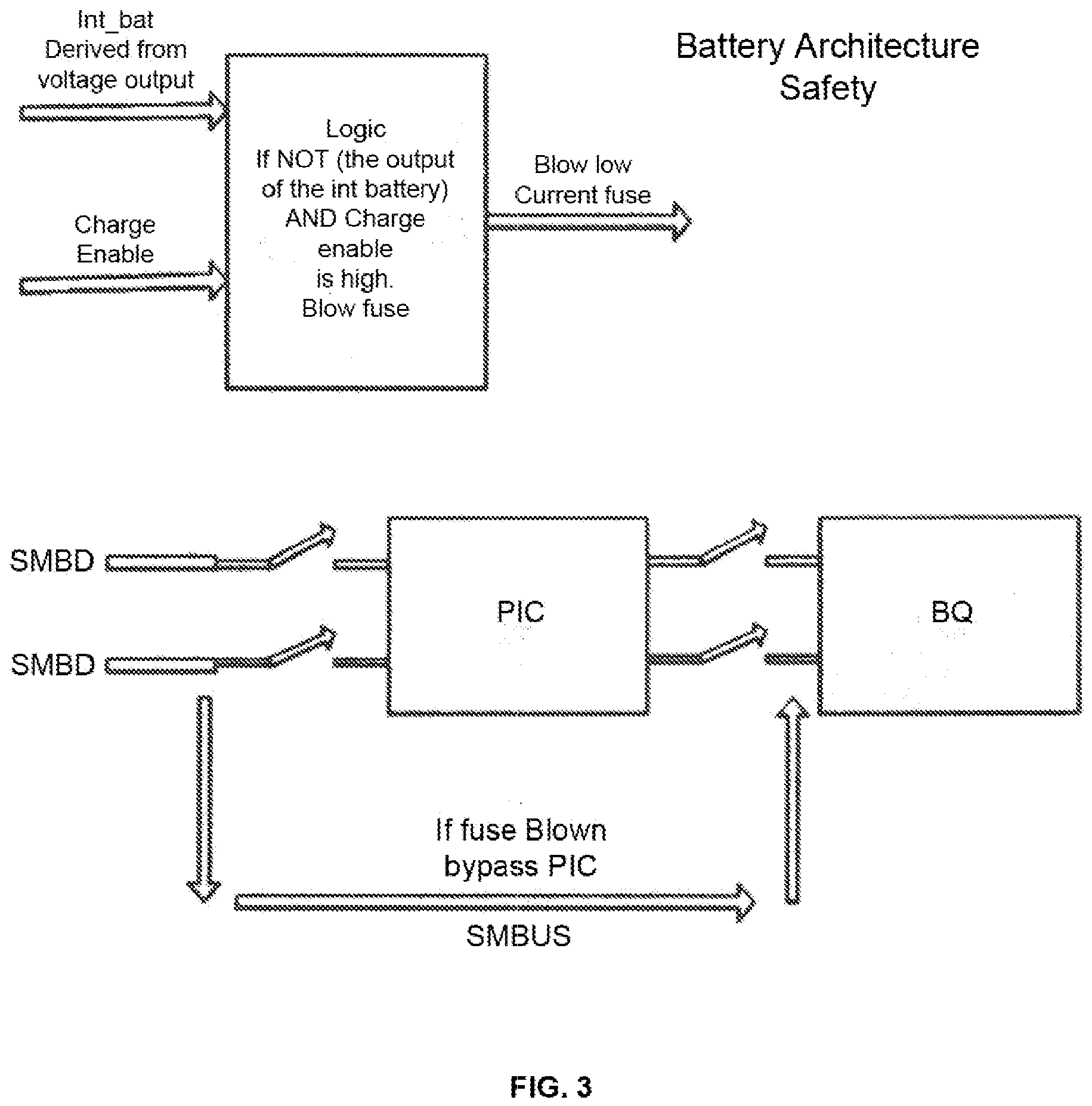 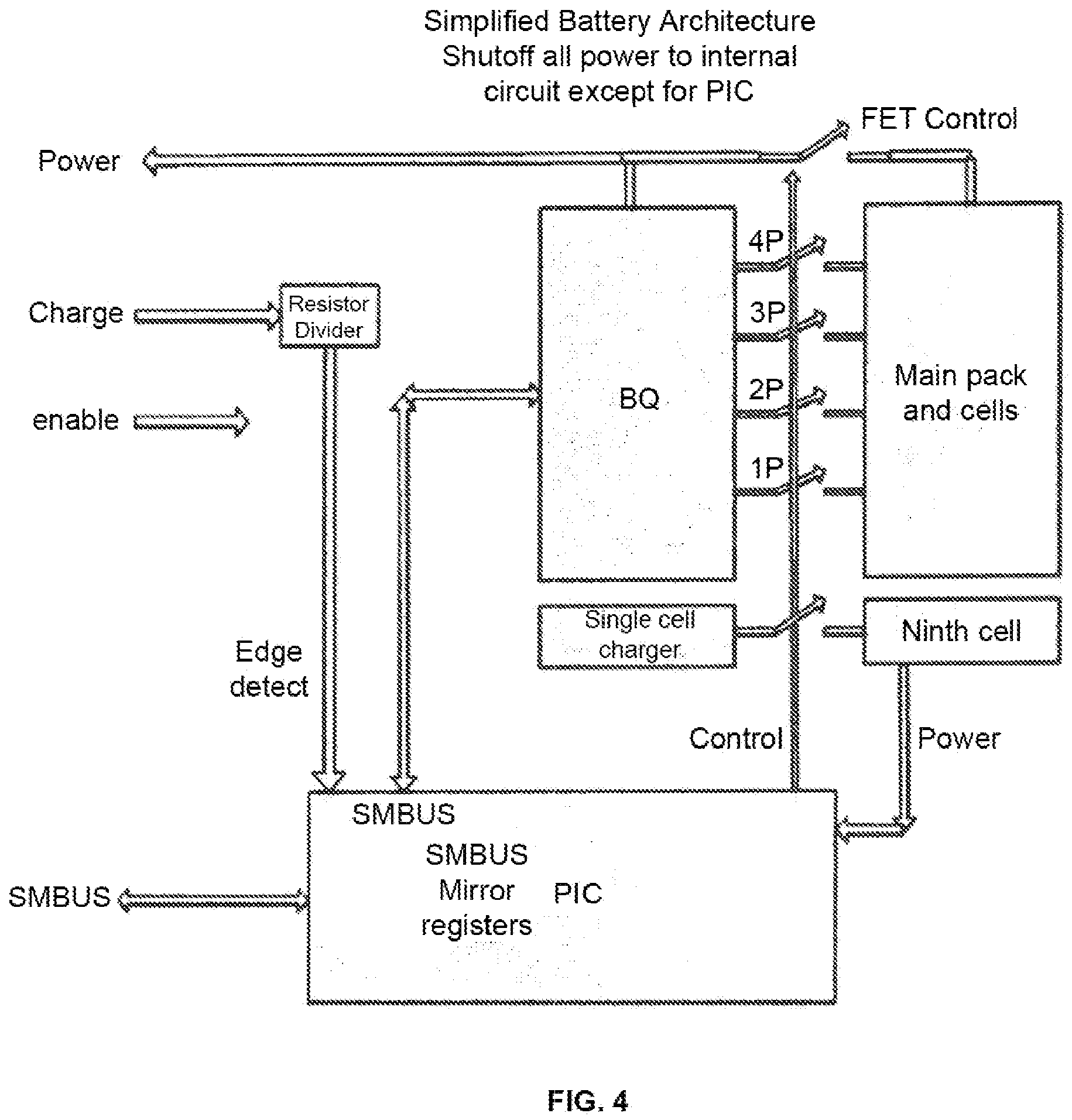