[0001] The proposed technical solution relates to clothing industry and associated trade industry, in particular, to a method for virtually selecting clothing by creating a virtual three-dimensional body template, and by virtually selecting ready-made or made-to-measure clothing and accessories.
[0002] Over the centuries, worldwide fashion and industrial clothing manufacturers have used the accumulated experience of producing clothing items based on measurements of a subject's figure. Many years of statistical studies and experience in manufacturing and trading yielded standards allowing to structure and systematize human race (and presently, the entire pet population as well) based on height, girth, gender, age and other parameters. Therefore, measurements of a subject's figure remain to be the primary parameters for designing and fitting of clothing.
[0003] The primary objective of the present invention is to bridge the gap between clothing sellers, manufacturers and ultimate consumers, thus satisfying common interests and requirements by using novel technology of virtual clothing selection. The novel technology should be easy to implement and consistent with conventional widely used technologies. Furthermore, the novel technology should be able to provide new opportunities and enhance current technologies which have already been proved to be effective.
[0004] Presently, virtual selection is implemented using various methods. Some of said methods are described in the following prior art documents.

Description of the Prior Art

1) CA2518017 C discloses scanning a body using a graphically segmented elastic covering and a video camera placed at a fixed distance and passing precisely along a fixed orbit around the static body. CA2518017 C, PCT/EP2004/002136, published on 01.03.2012, priority date 03.05.2003, claimed on 03.03.2004 by Dirk Rutschmann; assigned to Corpus. EAg, Dirk Rutschmann.
This prior art technical solution has the following disadvantages: the body has to be kept static during scanning; the virtual model of the body obtained by scanning is static; a need for using a complex specialized hardware; a lack of standardized auxiliary devices; only one body can be scanned at a time.

2) US5805718 A1 discloses modeling a three-dimensional body shape using a computational method after capturing a photographic image from a predetermined distance by means of a specialized infrared-sensitive camera (see Patent Publication US5805718 A, PCT US 08/539,761, published on 09.08.1998, priority date 10.07.1994, claimed on 10.06.1995 by Ziquan Hong, Ryo Inoshiri, Akira Yoshida; initially assigned to Sharp Kabushiki Kaisha).
This prior art technical solution has the following disadvantages: computational complexity; error margins of the measurement results associated with the computational method; a need for using an expensive specialized measuring hardware; specific studio conditions are required to carry out the imaging procedure.

3) WO2012129252 discloses three-dimensional modeling of a body shape by means of combining and projecting the shape based on two-dimensional projections obtained by capturing photographic images of a subject (see Patent Publication WO2012129252 A1, PCT /US2012/029856, filed on 09.27.2012, priority date 03.24.2011, by Paul James Kane, Sen WANG; assigned to Eastman Kodak Company). WO2008113367 (A2)
This prior art technical solution has the following disadvantages: large amounts of data subsequently requiring compression; limited result generation speed due to computational complexity; necessary software requires excessive computer processing power and large data transmission bandwidth; specialized video camera is required for video imaging; specific studio conditions are required to carry out the imaging procedure; simultaneous scanning is limited to two bodies.WO2008113367 (A2)

[0006] This prior art invention discloses a method of facilitating remote fitting and/or selection of clothes, the method including:
[0007] The International Application n° WO01/53910A2 of LAM, Peter describes a body profile coding method and apparatus useful for assisting users to select wearing apparel. Furthermore, the patent application n° US2012/095589A1 of Vapnik Arkady refers to a system and method for 3D shape measurements and for virtual fitting room internet service. With the advent of computer technology in the field of clothing manufacturing, the first techniques to be implemented were standard techniques of designing articles of clothing on a plane. One disadvantage of the prior art invention is that the shape of the built three-dimensional mannequin model differ from body shape of a real human, and therefore mere knowledge of linear dimensions of the human body does not provide for ideal fit of clothing on the human figure.
[0008] The method lists organizational arrangements required to provide cooperation between clothing manufacturers and retail networks; however, the method lacks measurement technology providing good fit of clothing for an individual three-dimensional figure. The method does not allow the consumer to see a realistic three-dimensional image of clothing on his/her body.

[0009] The proposed solution provides a virtual three-dimensional mannequin having the unique proportions of an individual subject, with the selected article of clothing put thereon. This invention is intended to solve the problem of selecting clothing from databases of various clothing manufacturers, said clothing fitting an individual subject not only by size, but also by corresponding body type. Furthermore, achieving the required effect requires using only two photographic images of the subject, the images being front view and rear view, while the subject is covered by an elastic template having reference markings, said template used in calculating anthropometric data of the measured subject and forming a virtual three-dimensional template of the subject's body, wherein the computer processing of the photo or video images includes:
[0010] The seller functions as a link between the clothing manufacturer and the buyer by establishing (on the seller's website by means of computing hardware) available databases of human body sizes and catalogs of clothing in production. Furthermore, the seller provides clothing manufacturers with data pertaining to changing trends in anthropometric parameters, tastes and requirements of product consumers, and provides buyers with data pertaining to available clothing models more suitable for the buyer based on shape.
[0011] Wide using of the present method would allow for gathering statistical data pertaining to anthropometric parameters of the population for inputting into databases, and would allow for development of various clothing models based on said statistical data.

Fig. 2 shows an example of capturing a photographic image of a subject wearing an elastic template.

Fig. 4 shows a comparison of two different figures dressed in identical elastic templates. The figure illustrates changes in relative position of reference geometrical elements of the templates when the elastic templates are worn by two people with different size features.

Fig. 7 shows a diagram illustrating highlighting and positioning of measured areas and showing parts of the body relevant for measuring.

Fig. 8 shows an example of dynamic use of the elastic template. The figure illustrates the possibility of using the system when moving, in order to create a most realistic effect of posing in front of the mirror.

1. A method for virtually selecting clothing, the method including:

obtaining photo or video images of a subject to be provided with selected clothing,

transferring the images to a computing device;

forming a three-dimensional model of a mannequin having the body parameters of the subject and wearing the selected articles of clothing,

the method being characterized by:

- using at least two of the transferred images of the subject, the images being a front view and a rear view of the subject wearing an elastic template of a particular size type having reference markings,

said elastic template used in determining the body parameters of the subject, wherein the computer processing of the photo or video images includes:

- determining the actual size of all body parameters by comparing dimensions of extensible portions on the photo or video images with reference dimensions of the non-extensible graphical elements on the elastic template,

wherein the shape, the number and the positioning of the non-extensible graphical elements form an individual pattern for elastic templates of each size type.

2. The method according to claim 1, further comprising:

- recording the body parameters of the subject in a library stored on said website;

- storing the three-dimensional model of the subject's body on said website in a library accessible by the subject, a clothing seller and a clothing manufacturer, wherein said library data can be subsequently used by the subject by inputting an identification code without re-measuring the body parameters.

3. The method according to claim 1, characterized by using standardized sets of elastic templates having reference markings and different size types comprising overalls or individual articles of clothing, and software for processing photo or video images of bodies wearing the elastic templates, the software being stored either on a personal computer or on the website.

4. The method according to claim 1, characterized by further forming, during use of the elastic templates, a library of template size types with reference markings formed by the non-extensible graphical elements.

5. The method according to claim 1, characterized in that the software for computing dimensions of various body areas and building three-dimensional models of the subject's body based on said computations can be installed on one or two computing devices.

7. The method according to claim 1, characterized in that the website belongs to or is created by a clothing seller.

8. The method according to claim 2, characterized in that each subject in the library of three-dimensional subject body models on the website is assigned a unique identification code. 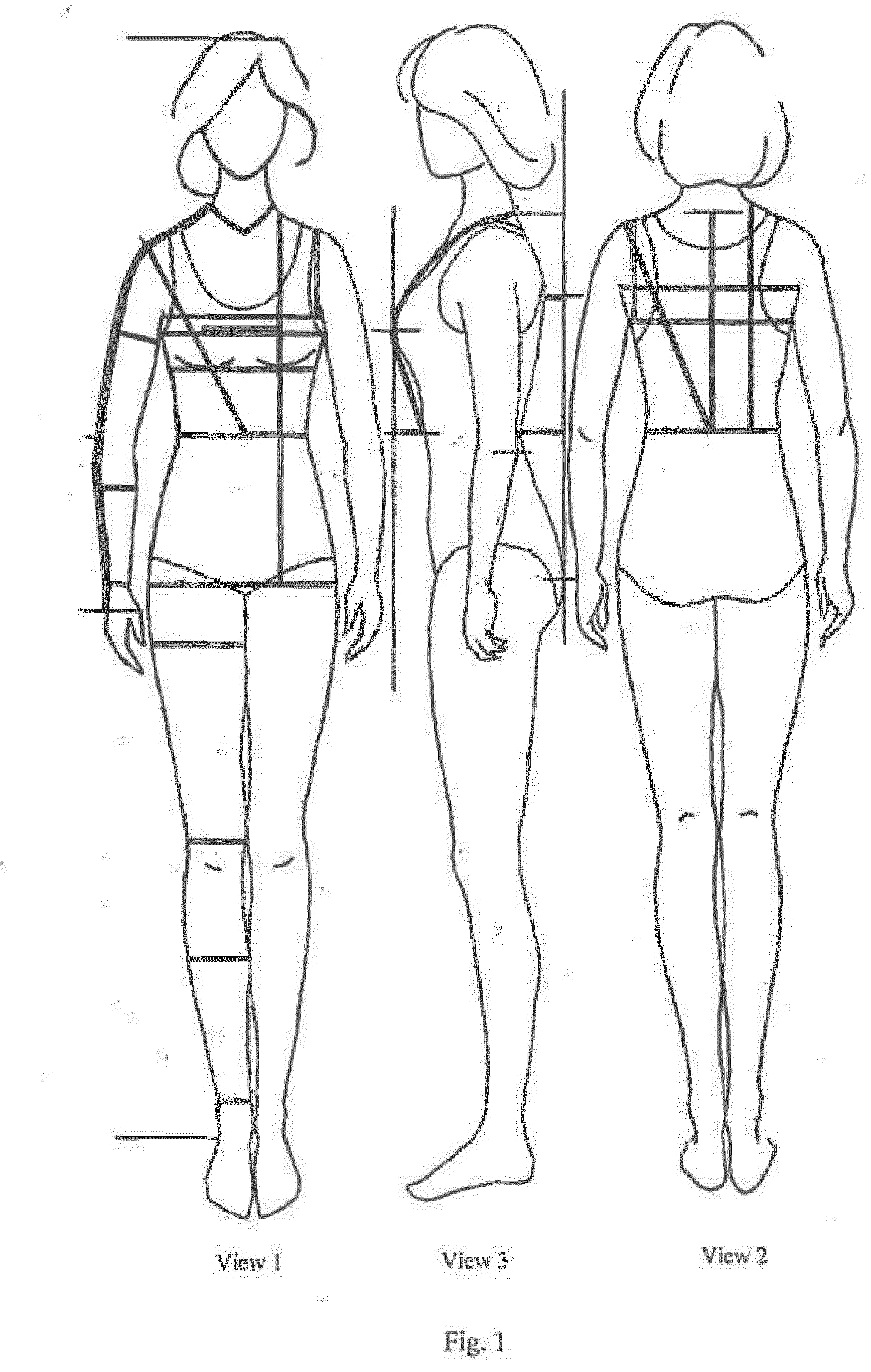 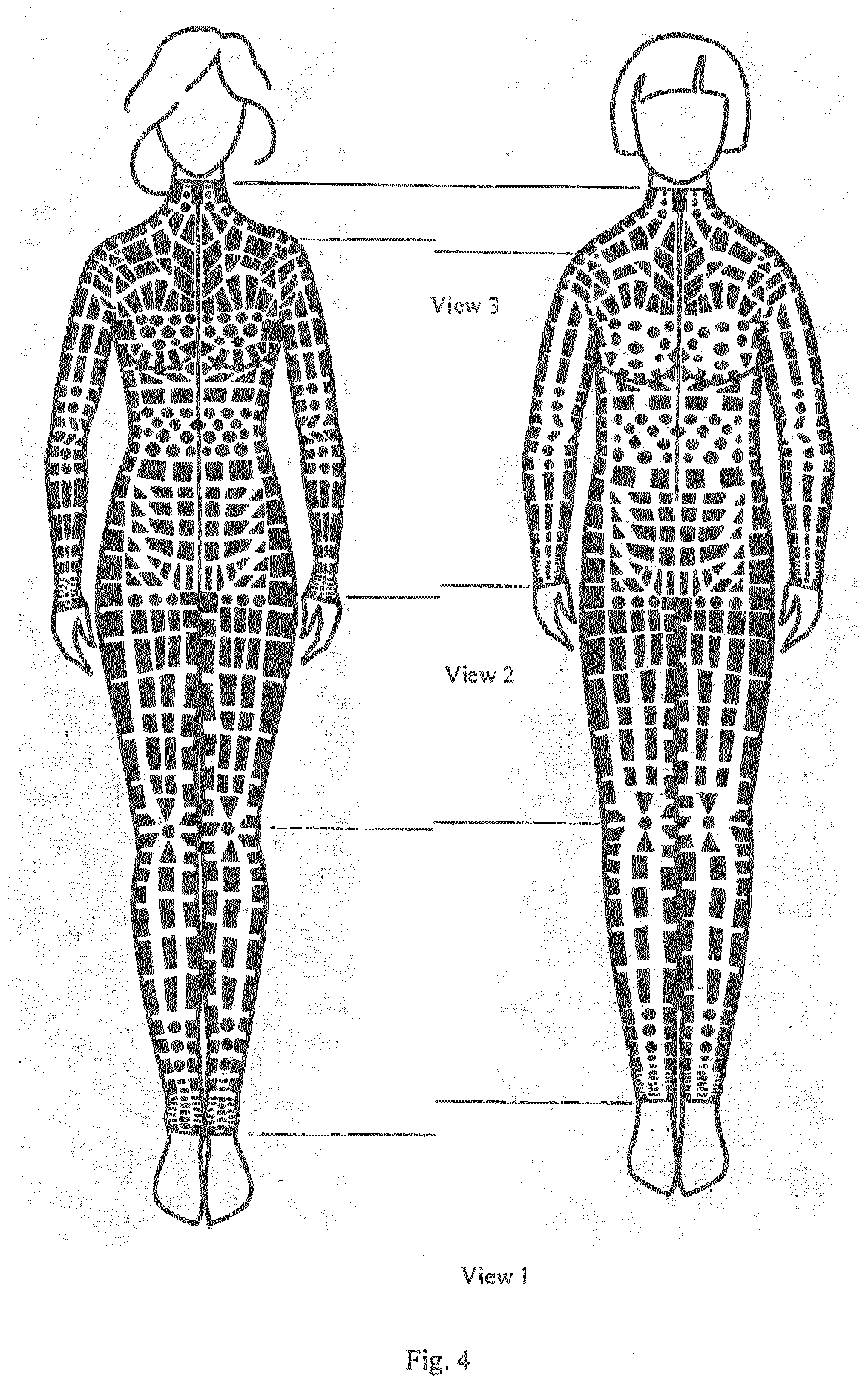 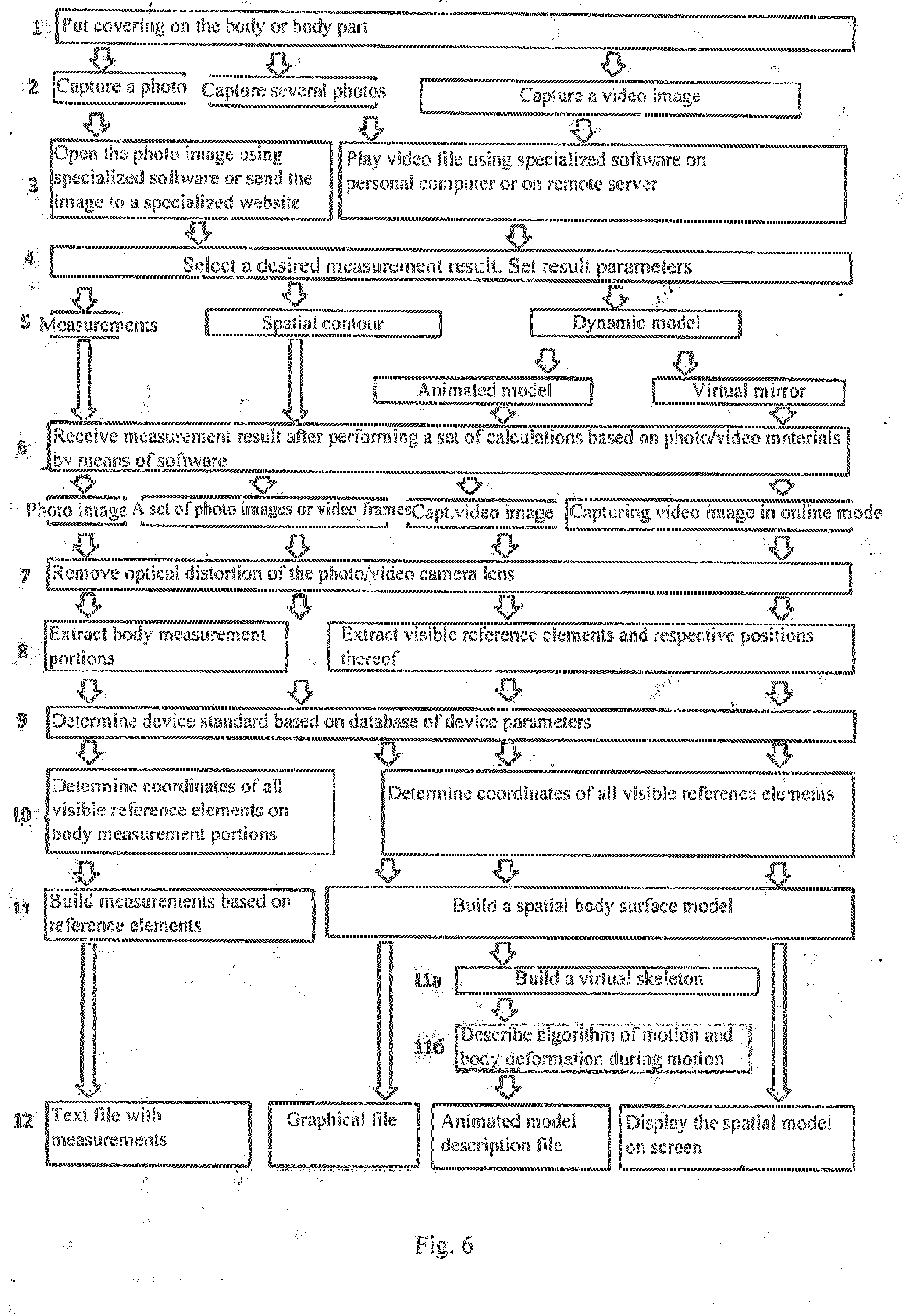 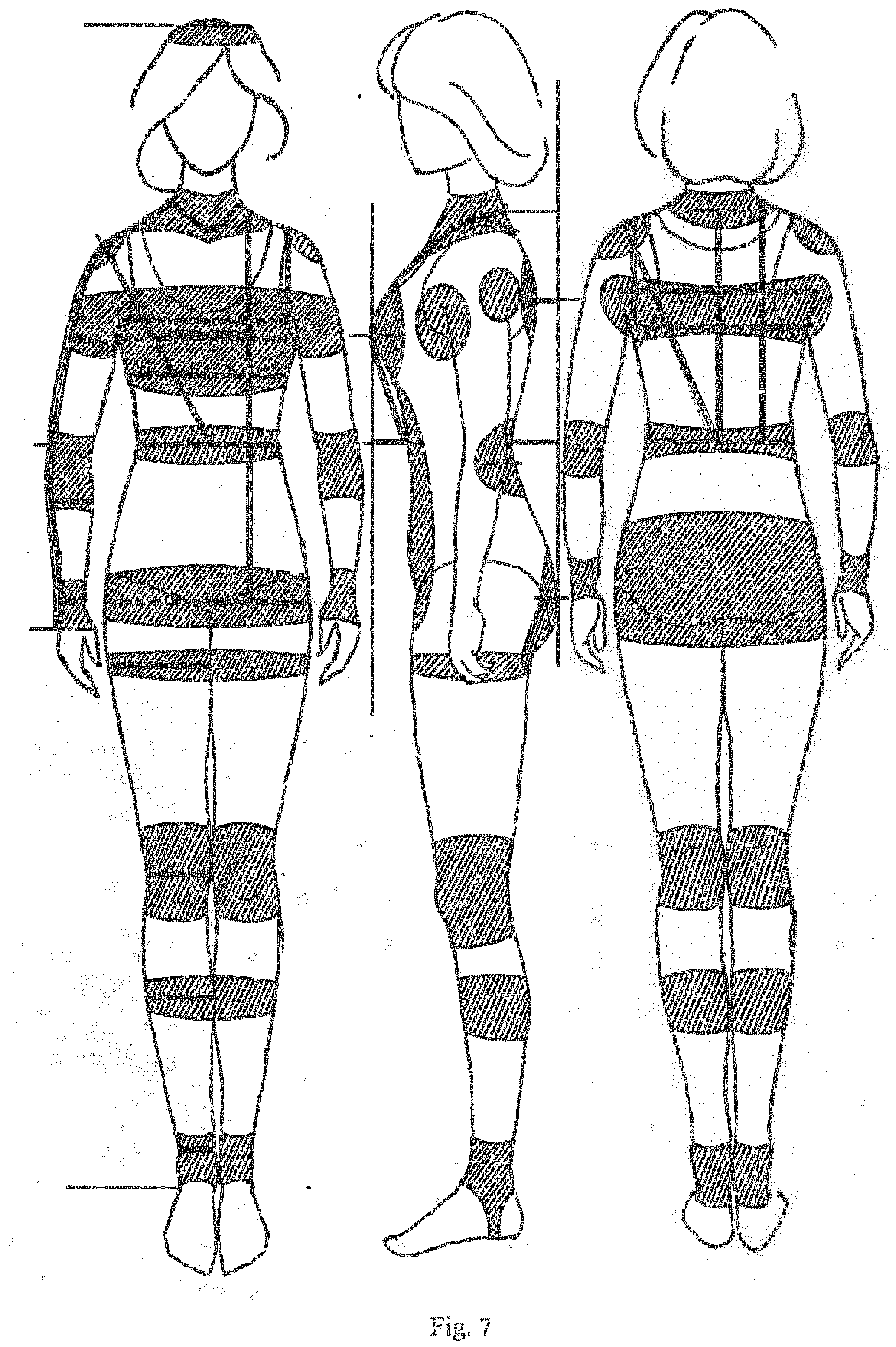