[0001] Radiation therapy, or radiotherapy, uses high-energy radiation to destroy target cells. In external-beam radiation therapy, photon beams emitted by radiation treatment machine, such as a linear accelerator, are focused on a target volume within the body. Circular collimators, often referred to as "cones," have been used to limit the breadth of the radiation emitted by the linear accelerator so as to limit the radiation exposure of non-targeted patient tissue. Such cones are normally attached to the linear accelerator immediately prior to radiotherapy treatment. Testing is required to ensure that the cone is aligned with the target volume with high accuracy. In addition, the linear accelerator must be properly configured to use the cone. Unfortunately, such testing and configuring is time consuming and errors in these processes can result in the misadministration of radiation to the patient.
[0002] Later model linear accelerators are typically equipped with built-in multileaf collimators (MLCs) that ameliorate the problems of cones and their use. MLCs comprise many thin "leaves" of a high atomic numbered material, such as tungsten, that can be independently linearly moved into and out of the path of a radiation beam in order to block it. Accordingly, MLCs can be used to conformally shape radiotherapy treatment beams.
[0003] While MLCs overcome the drawbacks of cones, the resolution of an MLC is typically insufficient for very small target volumes, such as those approximately 5 mm or less in diameter. In addition, configuration of the MLC is typically patient-specific and the calculation and measurement of the resulting dose distribution is complicated and fraught with difficulties that can result in errors.
[0004] From the above discussion, it can be appreciated that it would be desirable to have an alternative way to deliver very small radiation dose distributions using a radiation treatment machine equipped with an MLC.
[0005] The invention is defined in the appended set of claims. Methods mentioned hereinafter do not form part of the present invention.

[0006] The present disclosure may be better understood with reference to the following figures. Matching reference numerals designate corresponding parts throughout the figures, which are not necessarily drawn to scale.

Fig. 1 is an illustration of an embodiment of a radiotherapy treatment system.

Fig. 3 is a flow diagram of an embodiment of a method for providing radiotherapy treatment to a patient.

Fig. 4 is a flow diagram of an embodiment of a method for delivering radiation to a target volume within a patient.

Fig. 5 is a partial schematic diagram of a multileaf collimator (MLC) of a radiation treatment machine, the collimator shown in a first configuration.

Fig. 6 is a partial schematic diagram of the MLC of Fig. 5 shown in a second configuration.

where w(θ) is the weighting factor applied to the radiation dose and θ is the gantry angle. In cases in which the weighting factor is computed using Equation 1, the radiation dose would be at a minimum at the 0 and 180 degree positions and at a maximum at the 90 degree position. Although such a weighting function can be applied, it is noted that, alternatively or in addition, the radiation can be delivered along only a portion of the arcuate path that excludes the top and/or bottom ends of the paths (e.g., the first few and/or the last few degrees along the path) so as to reduce the radiation overlap.
[0022] Once a single pass has been made along one of the arcuate paths with the MLC in the first orientation, the MLC can be configured in a second orientation, as indicated in block 64. Fig. 6 illustrates such an orientation. As shown in this figure, the MLC 70 has been rotated through 90 degrees such that the aperture 74 is angled 45 degrees in the opposite direction from that in Fig. 5. In this orientation, the aperture 74 is approximately 90 degrees out of phase with its orientation shown in Fig. 5 (that orientation is illustrated in Fig. 6 with dashed lines). As is apparent from Fig. 6, there is only a small rectangular (square) area 76 (identified with cross-hatching) at which the two apertures overlap each other. If the radiation is again delivered along the same arcuate path as was traversed with the MLC 70 in the configuration of Fig. 5, the cumulative result will be a relatively high (e.g., double) dose of radiation being emitted only through the "virtual aperture" represented by the area 76. As can be appreciated from Fig. 6, this area/virtual aperture 76 has a width and length that is only limited by the spacing of the leaves 72 and not the width of the leaves. Therefore, the virtual aperture 76 can have length dimensions that are much smaller than the smallest length dimensions of an actual aperture that can be physically produced by the MLC 70. In some embodiments, the virtual aperture 76 has both width and length dimensions that are greater than 0 mm but less than 5 mm. For example, the width and length dimensions can be in the range of approximately 0.1 to 4 mm. In such a case, relatively high radiation doses can be limited to very small target volumes, i.e., volumes much smaller than those that can be treated without forming the virtual aperture 76.
[0023] With reference back to Fig. 4 and block 66, once the MLC has been configured in the second orientation, radiation can be delivered to the target volume through the MLC aperture with another single pass along the same arcuate path identified in block 62. Accordingly a relative high dose of radiation is delivered along the arcuate path through the virtual aperture using the two passes identified in blocks 62 and 66.
[0024] Referring next to decision block 68, flow from this point depends upon whether or not further radiation is to be delivered to the patient. If not, flow for the session is terminated. If so, however, flow returns to block 60 and radiation is delivered to the patient in the same manner described above but along a different arcuate path. In some embodiments, radiation is delivered to the patient along approximately 5 to 10 180 degree arcuate paths with two passes being made along each path.
[0025] Fig. 8 shows measured and calculated dose profiles for 1.5 mm and 3 mm leaf separations for two irradiation conditions. For the static condition, the patient support (treatment table) is stationary while the gantry rotates around the patient. After completing the arc delivery at each table position, the table is rotated. For the dynamic condition, the table and gantry rotate continuously.

1. A system for providing radiotherapy treatment to a target volume of a patient, the system comprising:

a radiation treatment machine including a multileaf collimator having multiple pairs of opposed linearly displaceable leaves; and

a computer that executes a radiotherapy treatment control program that is configured to control the radiation treatment machine so as to:

2. The system of claim 1, wherein the radiation treatment device comprises a linear accelerator.

4. The system of claim 3, wherein the second orientation in one in which the multileaf collimator and the actual aperture has been rotated through approximately 90 degrees relative to the first orientation.

5. The system of claim 4, wherein the actual aperture has a width of less than 5 mm and a length of at least 5 mm.

6. The system of claim 5, wherein the virtual aperture has a width and length that is less than 5 mm.

7. The system of claim 6, wherein the virtual aperture has a width and length that is in the range of approximately 0.1 to 4 mm.

9. The system of claim 8, wherein the dosage varies a function of the sine of the angular position along the arcuate path. 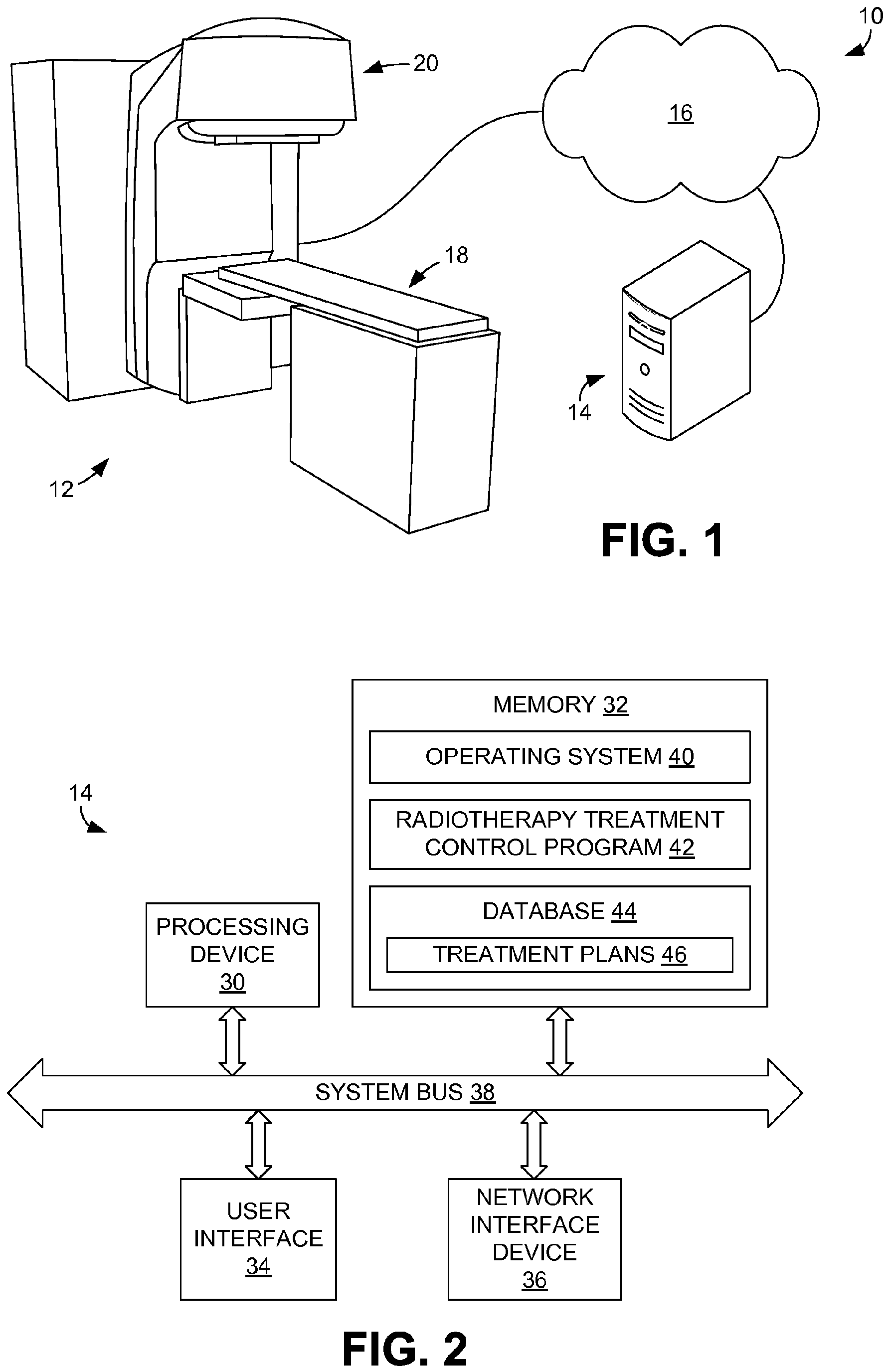 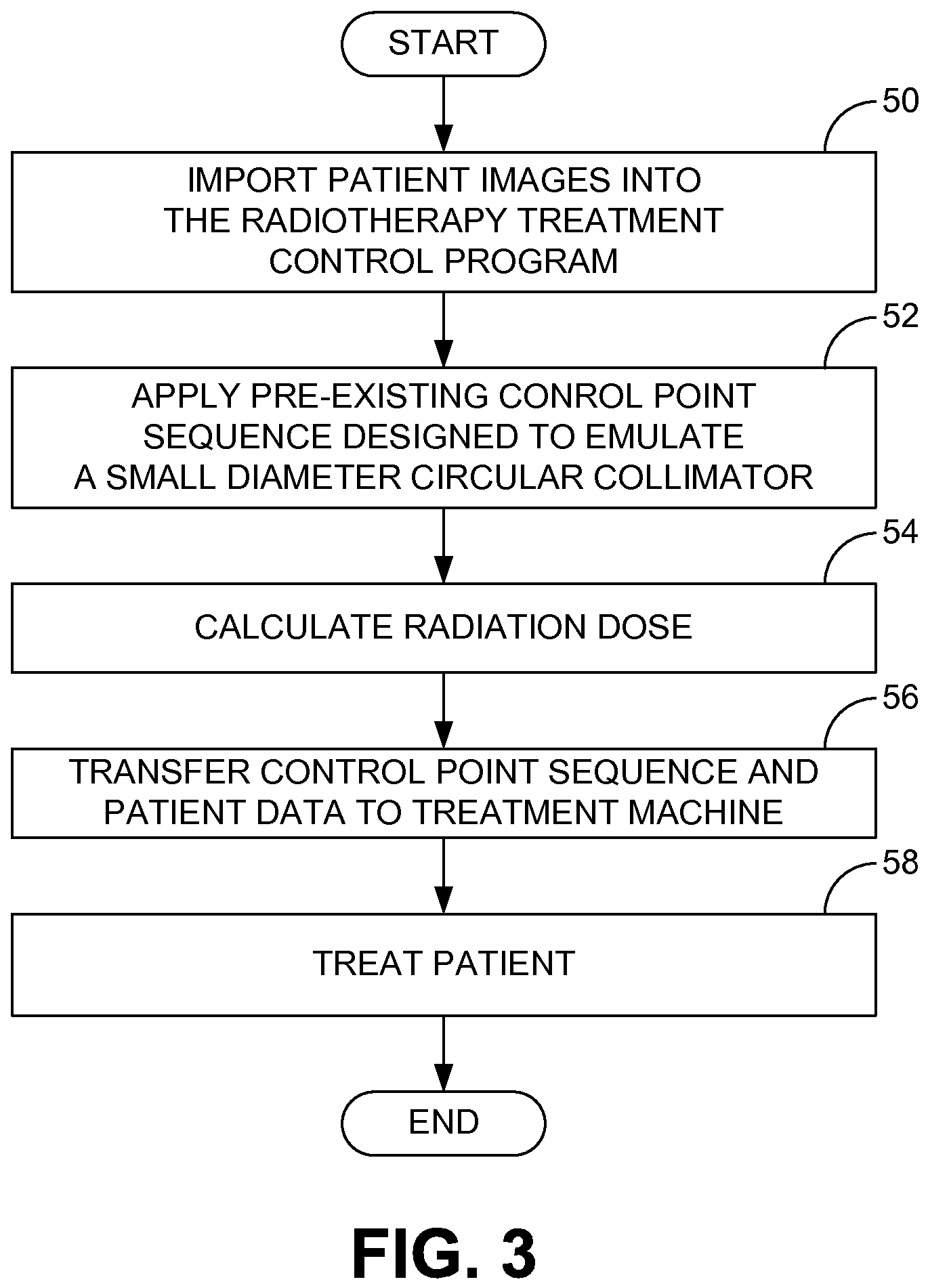 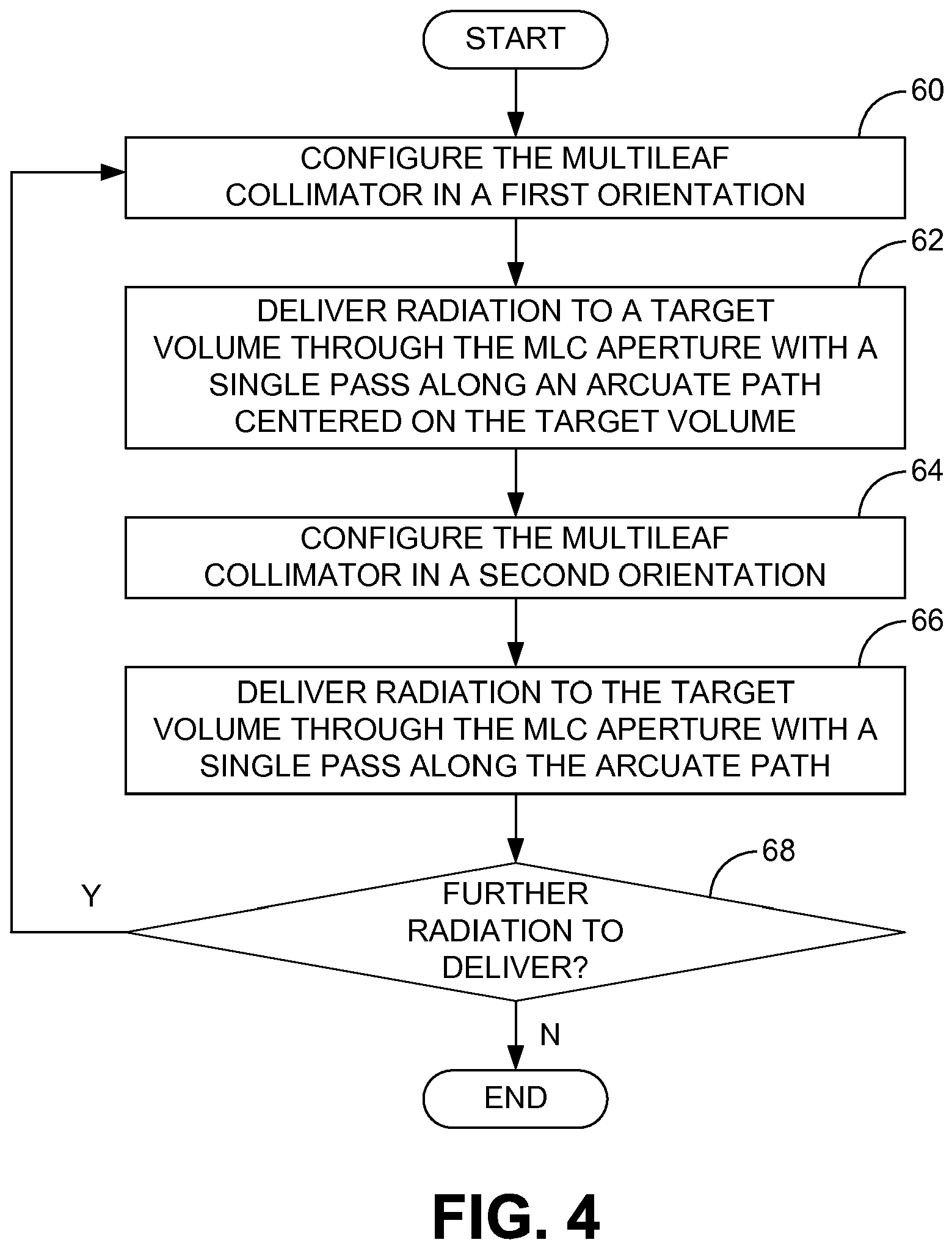 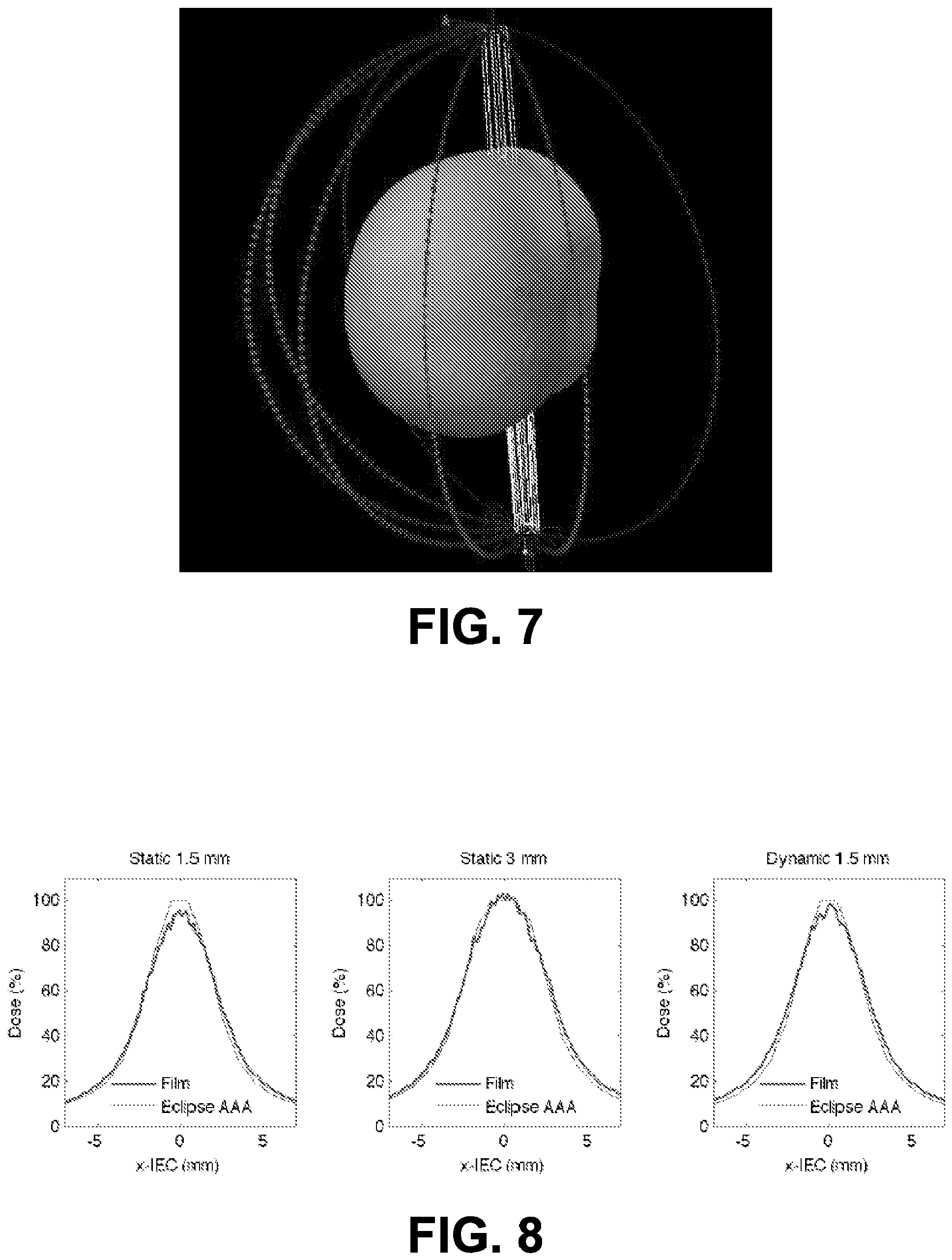