[0001] The present invention relates generally to the medical technology field and, in particular, to a cryogenic system.

[0002] Over a recent number of years, there has been a strong movement within the surgical community toward minimally invasive therapies. The main goals of the minimally invasive therapies include: 1) eradication of targeted tissue, 2) decreased hospitalization time, 3) limited postoperative morbidities, 4) shortened return interval to daily functions and work, and 5) reduced overall treatment cost. Cryotherapy is a minimally invasive method of treating a disease state through tissue freezing with thousands of patients now receiving the procedure annually. Currently, cryotherapy is used to treat numerous disease states including organ confined tumors such as prostate, kidney, liver, as well as cardiovascular disease, retinal detachment, pain management, and other illness/disease states.
[0003] Cryotherapy is an effective yet minimally invasive alternative to radical surgery and radiation therapy. The procedure is done under either general or epidural anesthesia. The procedure offers patients a quicker recovery and reduced severity of potential side effects. Without the expense associated with major surgery or an extended hospital stay, cryotherapy is a cost-effective treatment option.
[0004] The approaches utilized to date have focused on the delivery of liquid cryogen through the use of moderate to high pressure on the entire system or piston/bellows compression to drive fluid movement. At present, current systems utilizing liquid nitrogen operate at pressures between 0,96 - 33,1 Bar (14 - 480 psi); the systems in use cannot operate or withstand pressures greater that 34,5 Bar (500 psi). Further, the use of heat exchangers have been limited to coils placed into a bath of cryogen to allow for time consuming, inefficient passive subcooling of the cryogen in which activation of these devices circulate a cryogen (such as liquid nitrogen) to a probe to create a heat sink, thus resulting in tissue freezing.
[0005] US2008/0173028 discloses a system for cryogenic cooling.
[0006] There exists a need for improvements in cryotherapy, and medical devices or components associated with the treatment, to better circulate liquid cryogen to a cryoprobe, to provide for rapid delivery through small tubes, and to facilitate improved measures for treatment and cost. The system of the present invention will allow for the circulation (cooling, delivery, and return) of liquid cryogen to a cryoprobe for the freezing of targeted tissue. The invention will facilitate the eradication of tissue, decrease hospitalization time, limit postoperative morbidities, shorten return to daily functions and work, and further reduce the overall treatment cost. Desirably, these improvements to device design and application will also increase its utilization for the treatment of multiple disease states.

[0007] The following invention is a cryogenic medical device designed to deliver subcooled liquid cryogen to various configurations of cryoprobes for the treatment of damaged, diseased, cancerous or other unwanted tissues. The device is a closed or semi-closed system in which the liquid cryogen is contained in both the supply and return stages.
[0008] The invention is defined in appended independent claim 1, preferred embodiments are defined in the dependent claims.
[0009] By converting liquid nitrogen to supercritical nitrogen (SCN) in a cylinder/cartridge cooled by atmospheric liquid nitrogen (-196°C), the SCN can be subcooled and tuned to the liquid phase, attaining an excess temperature. When the SCN is injected into one or more flexible cryoprobes, the SCN flows with minimal friction to the tip of the probe. In the tip, SCN pressure drops due to an increased volume and outflow restriction, heat is absorbed (nucleate boiling) along the inner surface of the tip, micro bubbles of nitrogen gas condense back into a liquid, and the warmed SCN reverts to pressurized liquid nitrogen as it exits the return tube and resupplies the dewar containing atmospheric liquid nitrogen. This flow dynamic occurs within a few seconds, typically in the order of 1 to 10 seconds depending on the probe or attachment configuration, and is regulated by a high pressure solenoid valve. Further, once the instruments are in place, the cryosurgical procedure can be performed with freeze times in ranges of about 15 seconds to 5 minutes (or ranges thereof), a drastic improvement over current known methods. Upon emptying of the first cartridge subassembly, the process can be repeated with the second cartridge subassembly or any number of cartridges operated individually or in combination. Furthermore, embodiments of the present invention can be incorporated in any supercooling system or in delivering liquid cryogen to the desired instrument.
[0010] In one embodiment, the closed or semi-closed system has multiple pressurized cylinders filling and firing in sequence, and pressurized through a heating coil in one or more of the contained pressurized cylinders. The device is vented to the surrounding atmosphere through an adjustable pressure vent to prevent excess pressure buildup while in operation. The device comprises a number of parts including a vacuum insulated outer dewar, submersible cryogen pump, a series of self-pressurizing pulsatile delivery chambers, baffled linear heat exchanger, return chamber, and a series of valves to control the flow of the liquid cryogen. The outer dewar comprises a cryogenic apparatus having pressurizing pulsatile delivery chambers which drive liquid cryogen through the baffled linear heat exchanger. The linear heat exchanger comprises a tube-within-a-tube (i.e. chamber within a chamber configuration) whereby a vacuum is applied to the outer chamber to subcool an isolated reservoir of liquid cryogen. The inner chamber comprises a series of baffles and a central spiral to increase the flow path of the liquid cryogen while providing for increased contact-based surface area with the outer chamber to allow for more effective heat transfer and subcooling of the cryogen being delivered to the probe. Following circulation to the cryoprobe, cryogen (liquid and gas) is returned to the device into a return chamber which surrounds the supply chamber, thereby providing for a staged secondary subcooling chamber for the cryogen in the supply tube. The return chamber is open to the main dewar tank thereby allowing for exchange of liquid and gas between the supply and return chambers. Device operation is controlled and monitored by a series of pressure and vacuum valves designed to control the flow, cooling, and pressurization of the liquid cryogen. This control is achieved through various configurations of manual and computer controlled systems.
[0011] In one embodiment of the invention, a cryogenic catheter or probe designed to deliver cryogen (liquid or gas) for the treatment of damaged, diseased, cancerous or other unwanted tissues is disclosed. The product/device is a tube within a tube and comprises a number of parts including a supply and return tubes (i.e. internal tubes), outer sheath (i.e. external tube) sealed to the inner tubes at one or both ends with a gas filled lumen between the internal and external tubes. The lumen of the external tube is filled with a non-equilibrating saturated gas which solidifies upon cooling, thereby creating a vacuum along the length of the catheter to provide for insulation between the inner and outer tubes and preventing freezing along the length of the probe shaft. Further the outside surface of the internal tubes is modified to potentiate gas nucleation on the outer surface of the internal tubes upon cooling.
[0012] At the distal end or tip of the probe shaft, the internal tubes come into contact with the outer tube and create a defined region of ultra cold temperatures to cool and freeze the target tissue region. The catheter is designed to carry liquid cryogen under various pressures as well as liquid cryogens of varying temperatures. Delivery of cryogen to the catheter is provided by a cryogenic medical device console through the connection of the longitudinal body.
[0013] In one embodiment, a dual insulative barrier is capable of being formed. The device creates a temperature initiated transient vacuum insulation along the length of a catheter. The device further couples the temperature initiated vacuum with that of a surface modification along the inner tubes/lines to enhance nucleation and deposition of the saturated gas on the outer surface of the inner tubes to create an additional layer of insulation. The enhanced deposition or nucleation modification contributes by making the vacuum more effective. In addition, the saturated gas filled lumen of the outer tube at ambient temperature may be run at any given pressure. For exemplary purposes and not limitation, one embodiment maintains the pressure at atmospheric levels or may control the pressure to elevated or reduced levels.

[0014] The invention is best understood from the following detailed description when read with the accompanying drawing figures. It is emphasized that the various features are not necessarily drawn to scale. In fact, the dimensions may be arbitrarily increased or decreased for clarity of discussion. Further, the below representations of a longitudinal body may not be drawn to scale where particular aspects extend the longitudinal body to lengths up to six feet and beyond (as dependent on the desired application).

FIG. 1 is a side view of an illustrative embodiment of the device of the present invention.

FIG. 2 is a side view of one embodiment of a heat exchanger of the present invention.

FIG. 3 illustrates a side view of an example of a heat exchanger not according to the present invention.

FIG. 4 is a top view of one embodiment of a device of the invention.

FIG. 5 is a depiction of a front view of the system.

FIG. 6 is a side view of an illustrative embodiment of an exemplary device when the lumen is filled with particles in gaseous state.

FIG. 7 is a cross-sectional view of the illustrative device in FIG. 6.

FIG. 8 is a side view of an illustrative device as temperatures are reduced to a freezing point of the particular gas selected.

FIG. 9 is a cross-sectional view of the illustrative device in FIG. 8.

FIGS. 10 - 13 are side views of various examples of a device of the disclosure.

FIG. 14 is an illustrative example of a product of the present disclosure.

a container (6) comprising one or more walls providing an internal holding area (15) for holding a cryogen;

a pressurization apparatus (40) having an internal open chamber (42) comprising an immersion heater (44);

a pump (1) that delivers the cryogen to the pressurization apparatus (40) and subsequently to the heat exchanger (4) to subcool the cryogen;

an exit port (35) configured to attach to at least one cryoprobe;

at least one return line (12) that at least partially returns the cryogen to the container (6);

2. The cryogenic system of claim 1, wherein the closed system is electronically controlled or computer operated.

3. The cryogenic system of claim 1, wherein the container (6) is a vacuum insulated dewar.

4. The cryogenic system of claim 1, wherein the heat exchanger (4) subcools the cryogen to a reduced temperature prior to delivery to the at least one cryoprobe.

7. The cryogenic system of claim 1, wherein the cryogen is nitrogen.

8. The cryogenic system of claim 1, wherein the cryogen is liquid nitrogen. 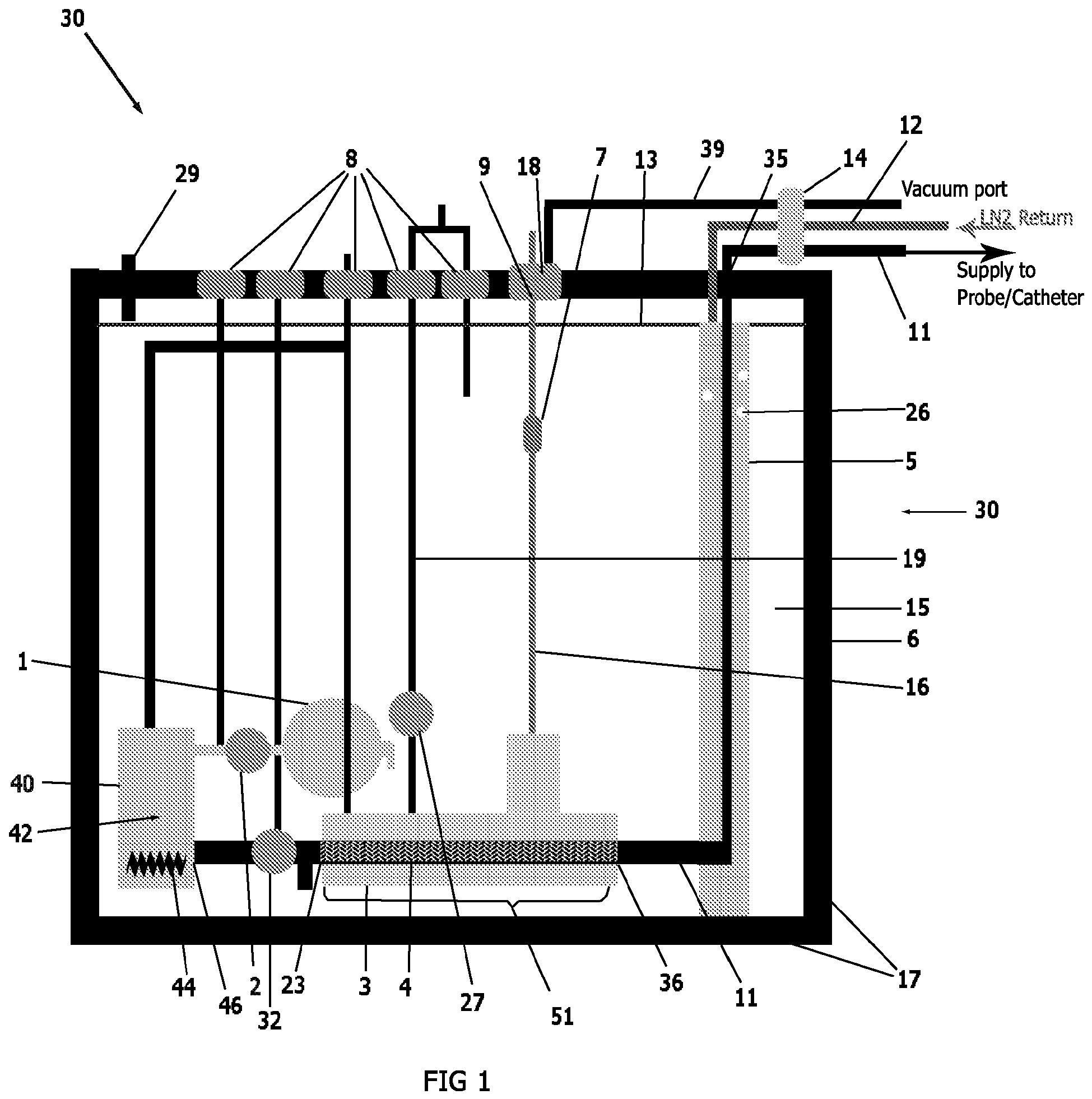 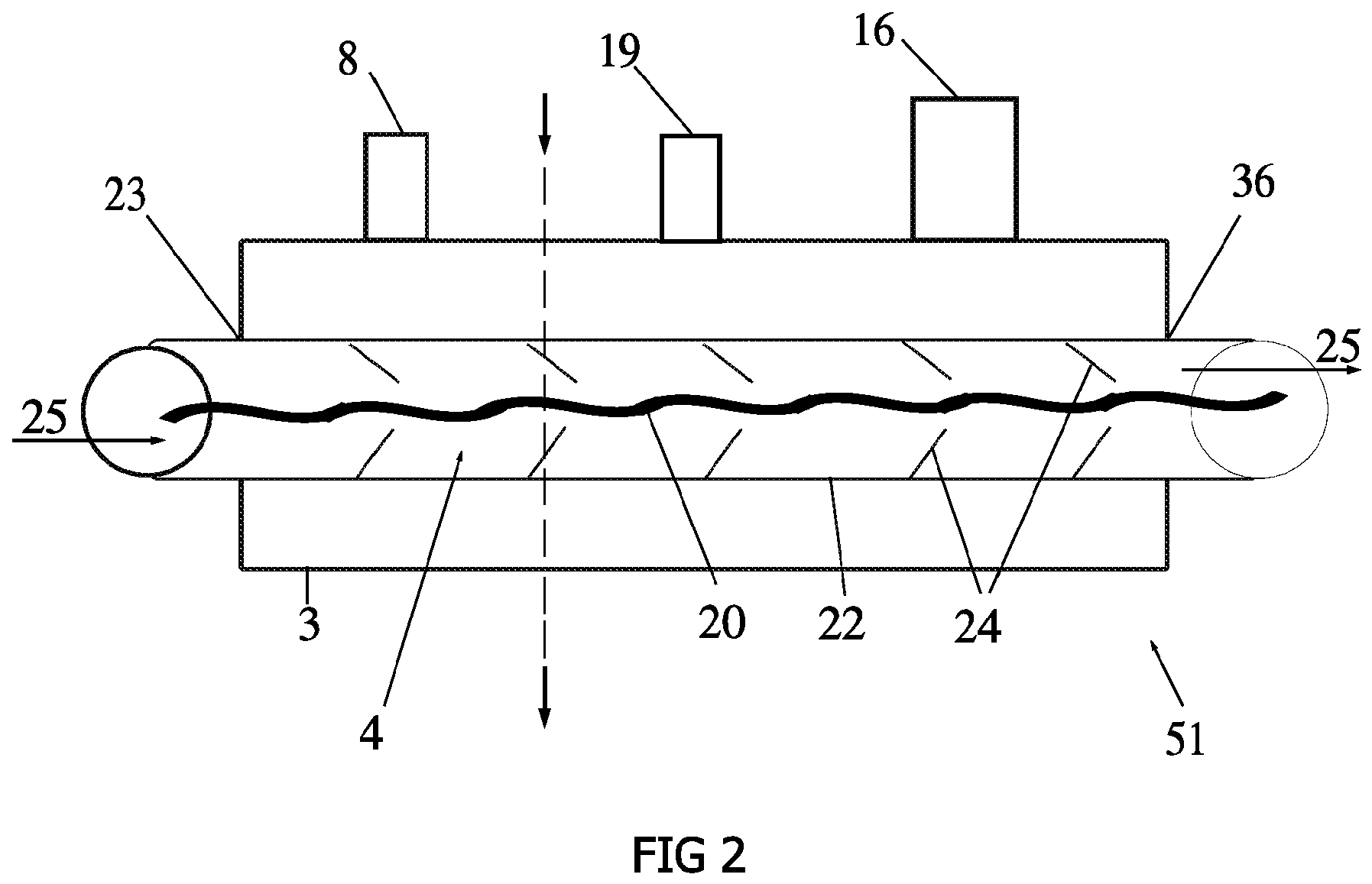 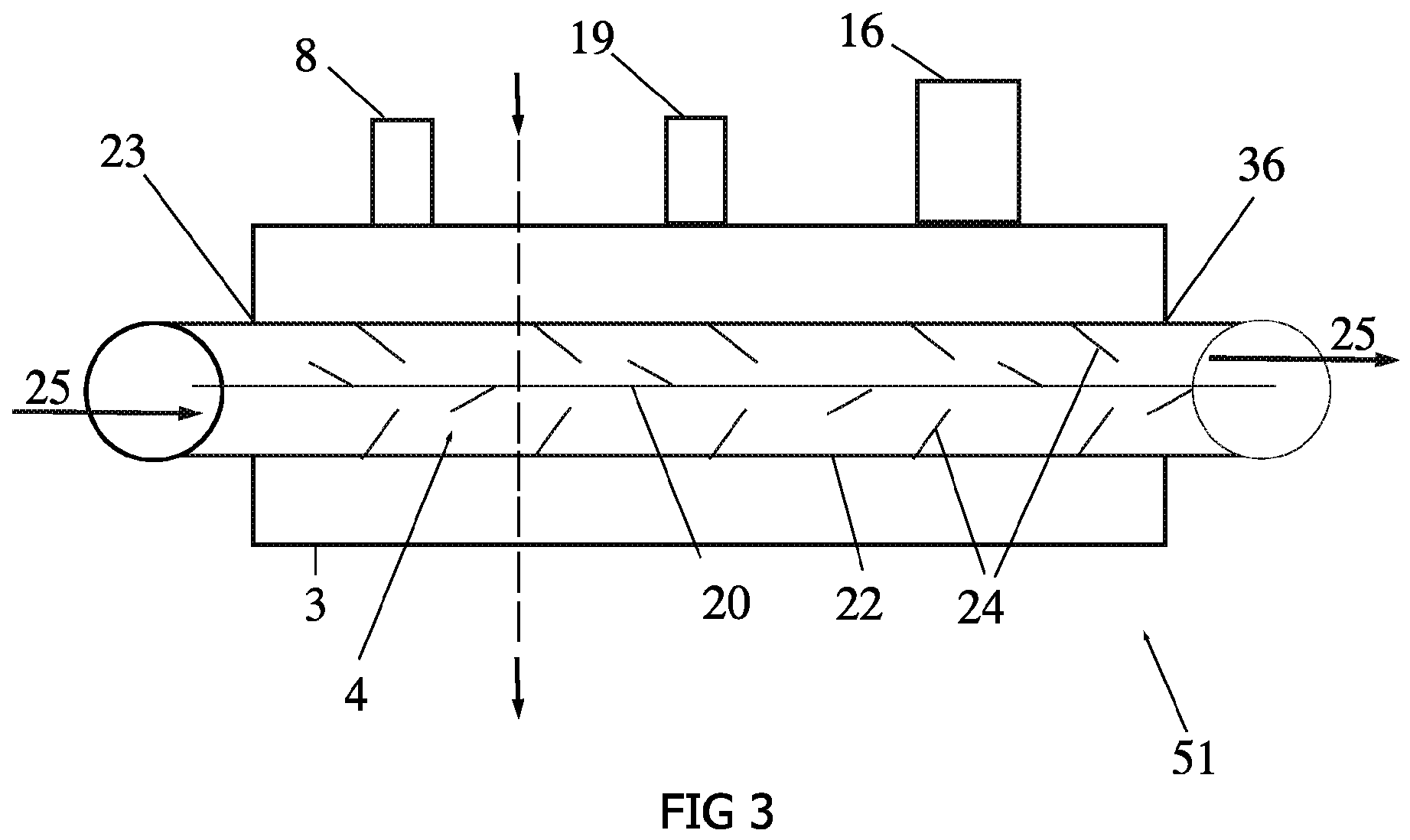 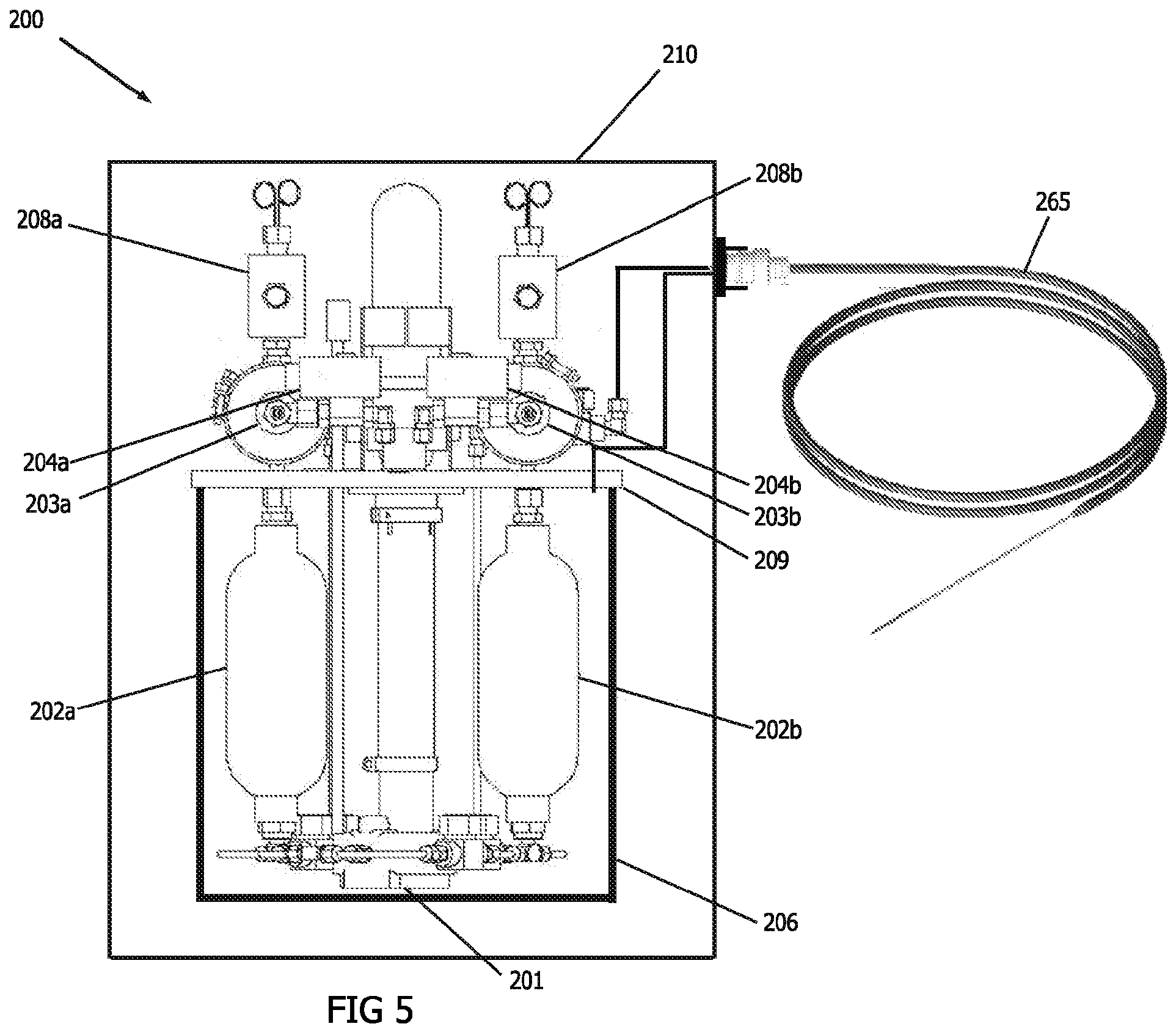 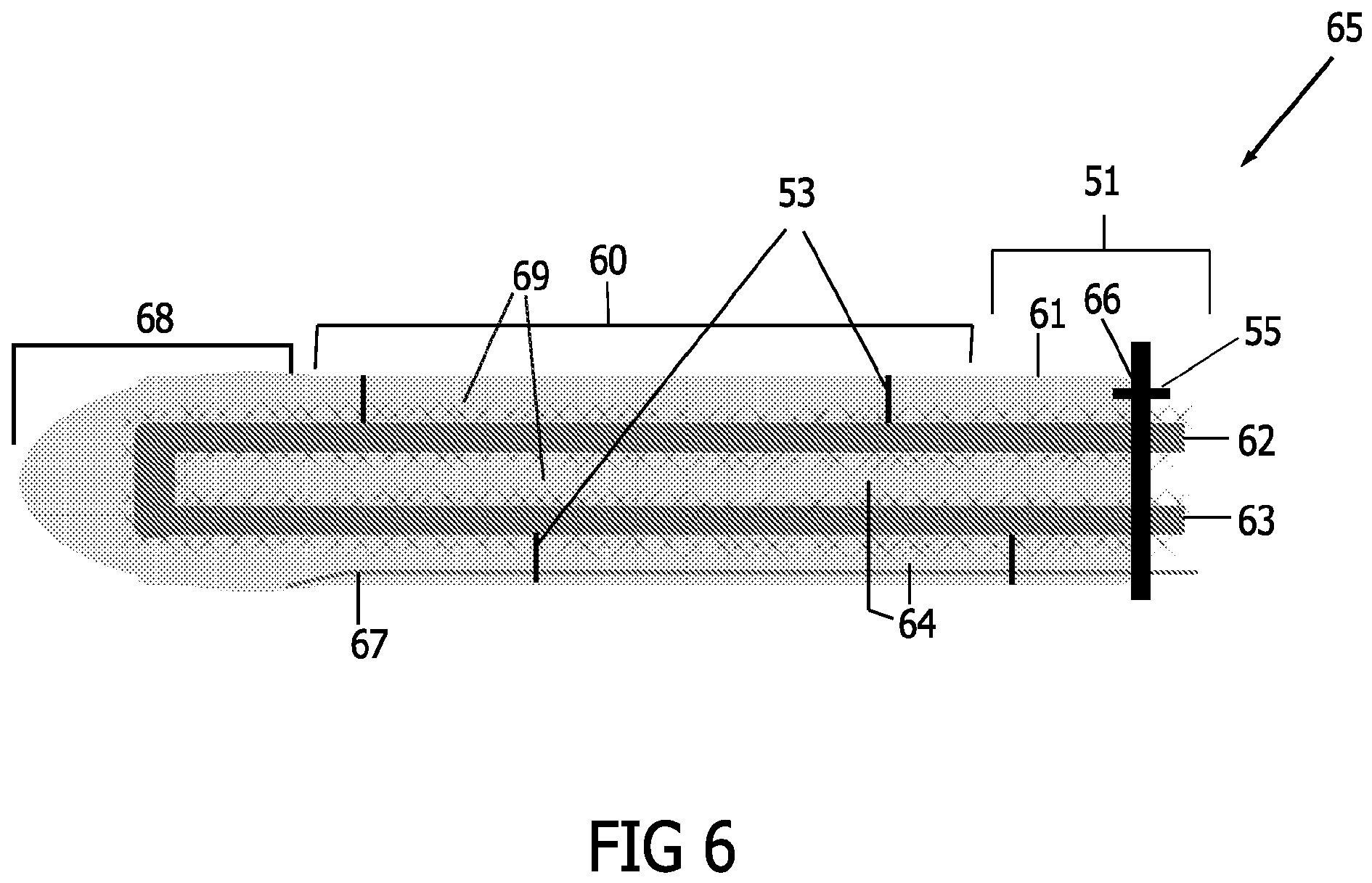 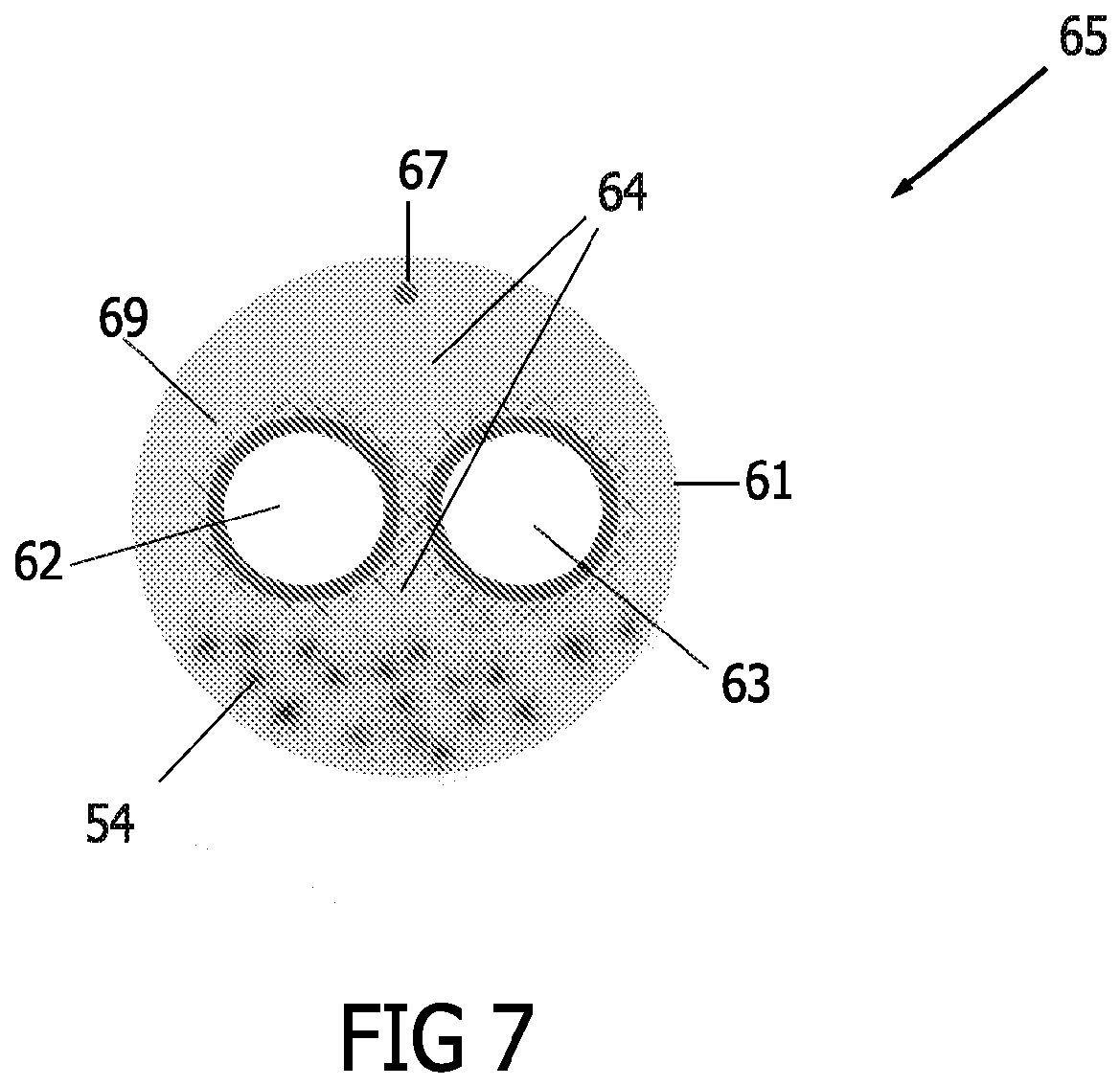 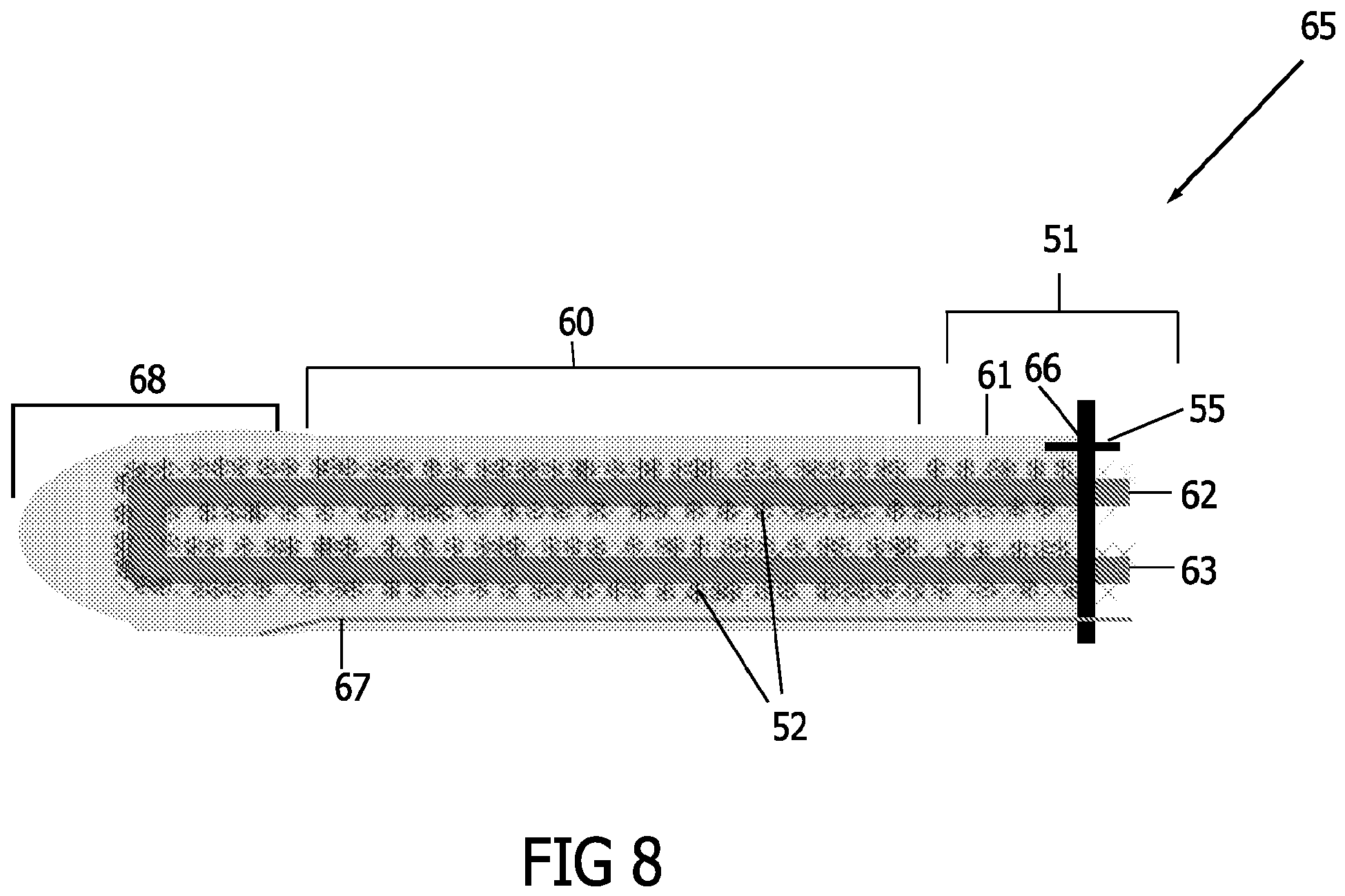 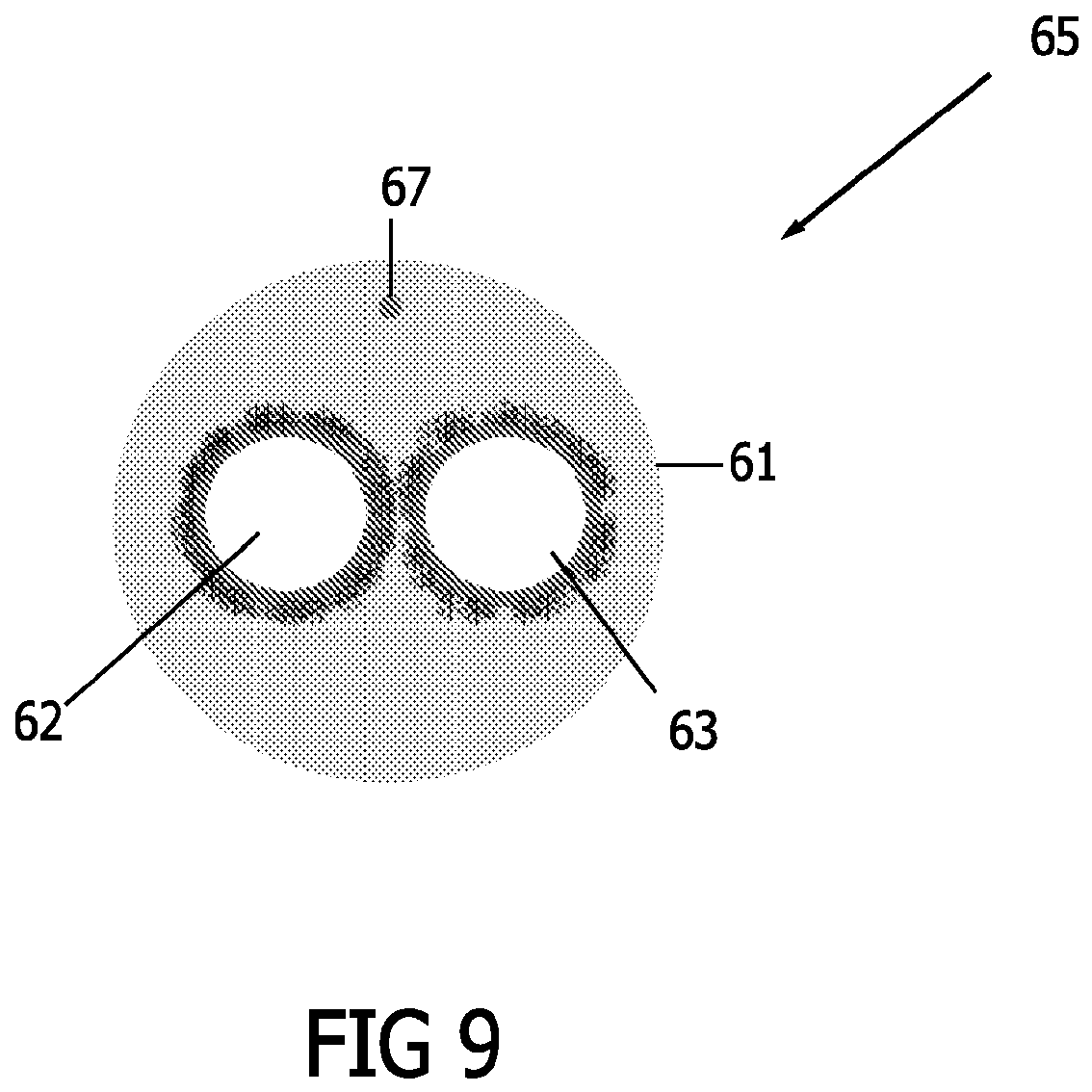 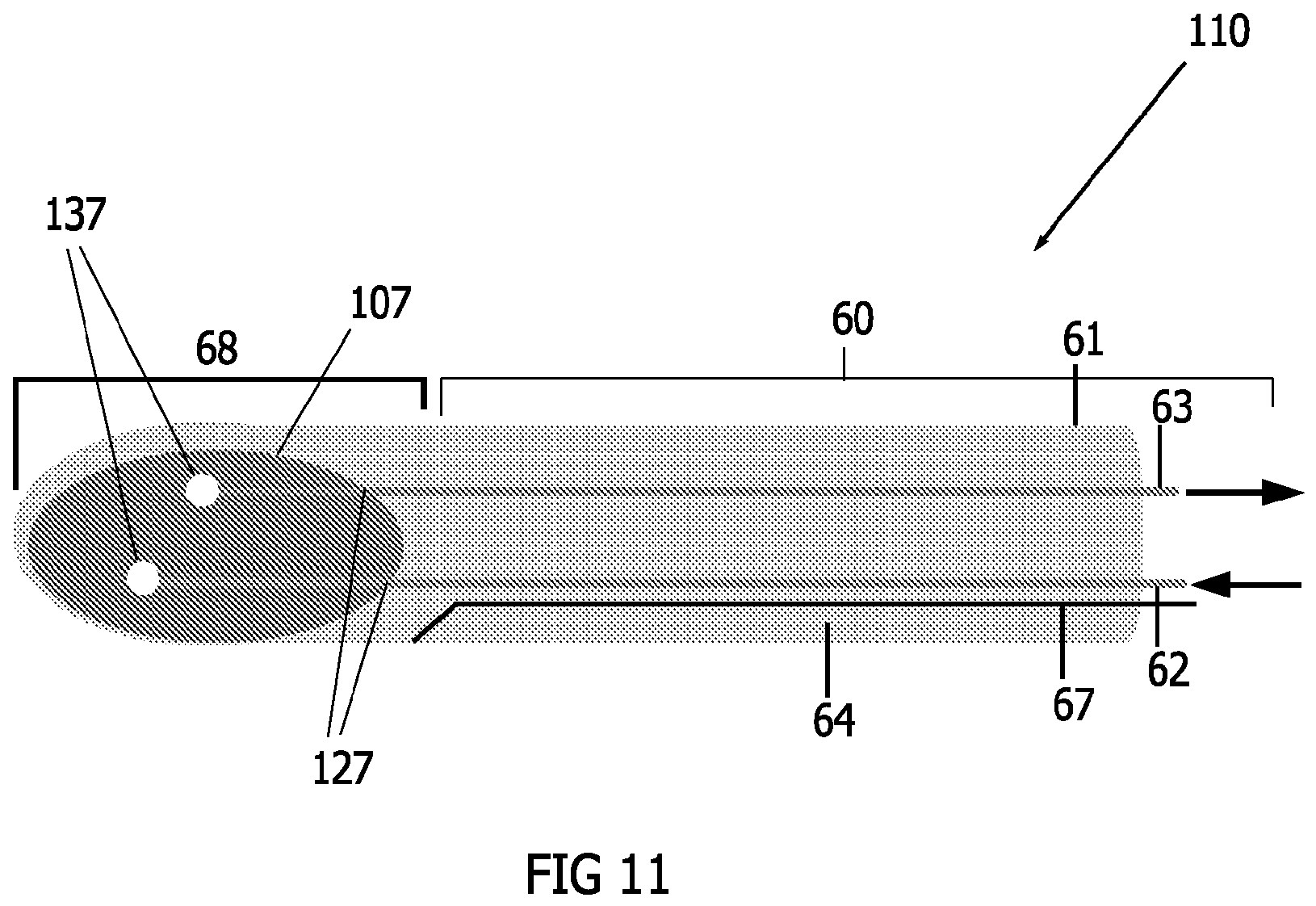 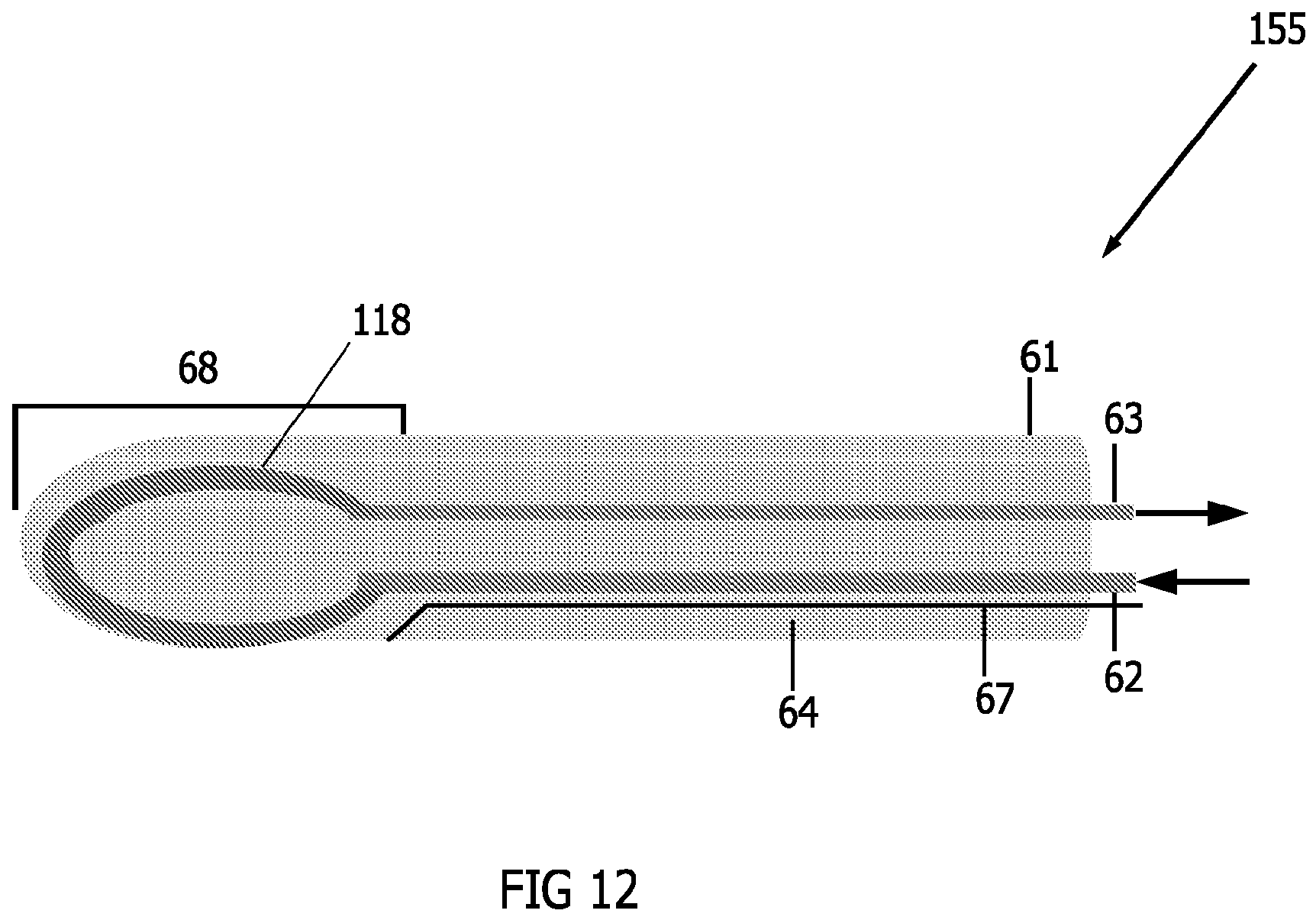 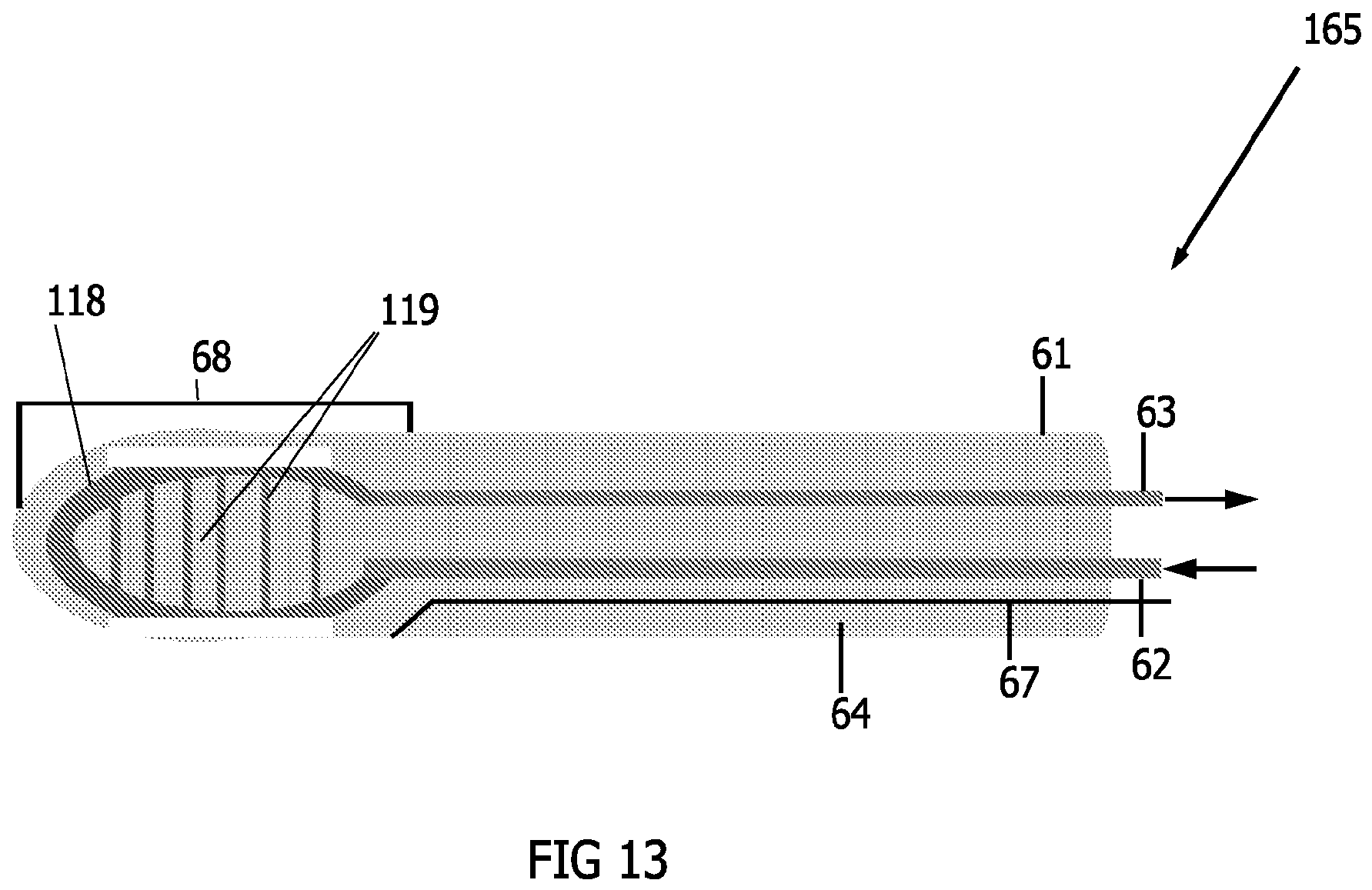 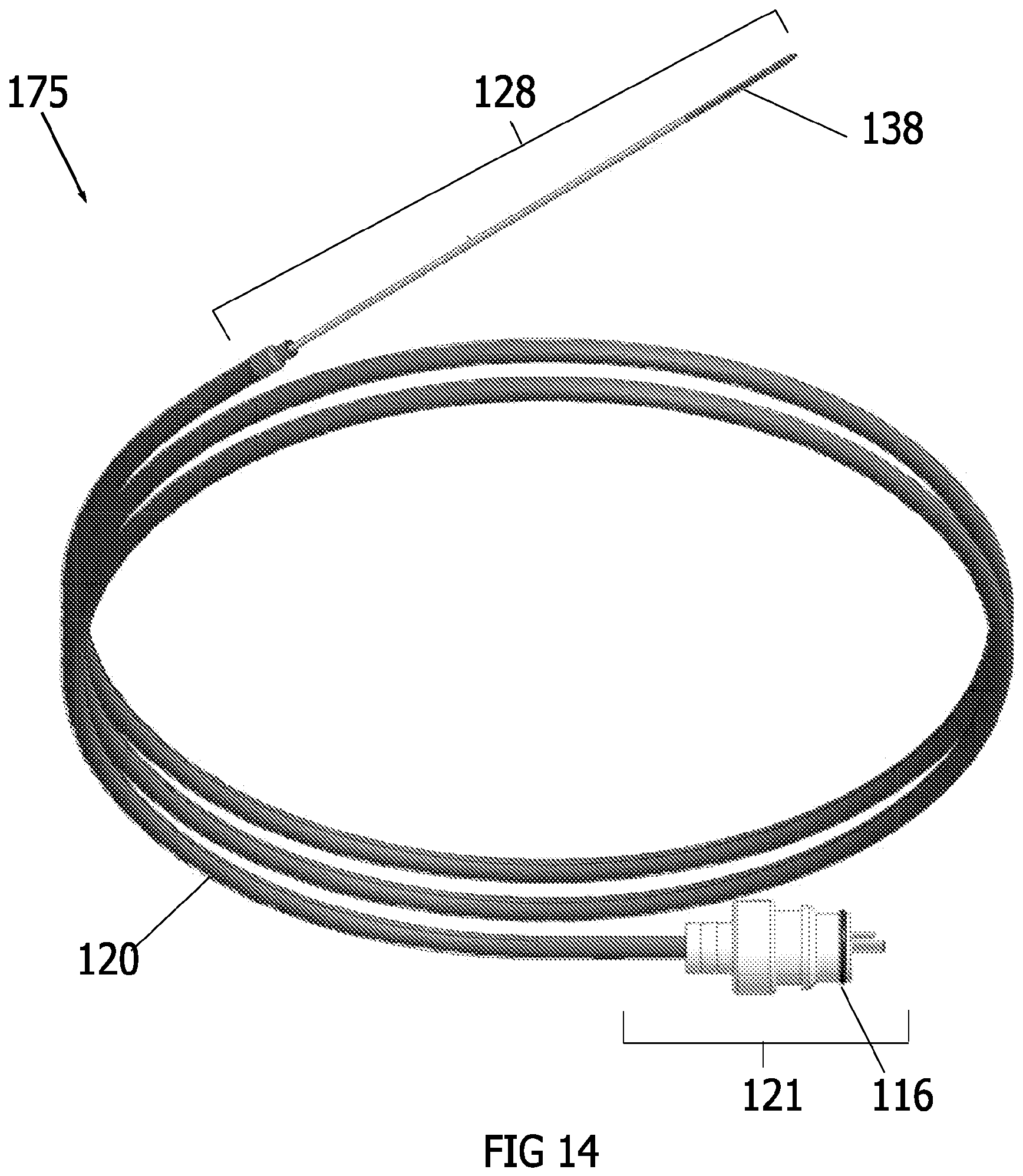