[0001] The present invention relates to a saddle, particularly for cycles, motorcycles, quadricycles and the like.
[0002] Conventional saddles are generally constituted by a shell made of a substantially rigid material (for structural purposes) and provided with a covering in order to improve its appearance and comfort.
[0003] Saddles are, furthermore, provided with means of connection to the frame.
[0004] Conventional implementation solutions can however offer levels of comfort that do not meet the requirements of certain users: persons who sit for many hours on the saddle, or persons with particular requirements such as, for example, professional cyclists or motorcyclists.
[0005] This second category of users demand, in fact, the utmost quality and comfort of the saddle, in that such characteristics of the saddle could affect performance and thus the result achieved, for example, in a competition.
[0006] US2005046245 discloses a bicycle saddle constructed to have a hard bottom shell, a first elastic layer made of foamed plastics and arranged at the top side of the hard bottom shell, a first covering covered on the first elastic layer over the hard bottom shell, and a second elastic layer covered on the first covering, the second elastic layer being formed of a layer of gel arranged at a top side of the first covering and a second covering covered on the layer of gel.
[0007] EP1132283 discloses a saddle for a cycle-like vehicle, such as a bicycle, a motor-assisted bicycle, a moped and a motorcycle, substantially comprising: a tensioning frame for arranging on the cycle-like vehicle; and a leather saddle cover carried by the tensioning frame, wherein the saddle cover comprises at least one cushion element at positions corresponding with average locations of buttock bones for users.
[0008] WO2012123876 discloses a support element (e.g. a seat, a saddle or a handgrip) for the human body comprising a layer made from soft and yieldable material and at least one surface insert with different characteristics in terms of appearance and/or comfort, in which said surface insert comprises a visible surface to be in contact with the user, wherein said visible surface has a smaller size than said layer and wherein said surface insert comprises at least one portion embedded in said layer.
[0009] US3997214 discloses a compartmented bicycle seat padding adapted to be secured to a bicycle seat having depressions formed therein and wherein said padding is enclosed by an outer leather-like exterior and the compartments of said padding receives a formable, stable, dilatant or thixotropic padding material of said padding such as polybutadiene.
[0010] WO2011141832 discloses a seat support, for example a bicycle saddle, comprising a support body made from polymeric materials derived from castor oil, a padding positioned on said body, and a coating that covers the padding, in turn the padding comprises at least one layer of foam.
[0011] The principal aim of the present invention is to solve the above mentioned drawbacks by providing a saddle for cycles, motorcycles, quadricycles and the like which makes it possible to achieve a stable seating, thus preventing any slipping.
[0012] Within this aim, an object of the invention is to provide a saddle for cycles, motorcycles, quadricycles and the like which is particularly comfortable for the user.
[0013] Another object of the present invention is to provide a saddle for cycles, motorcycles, quadricycles and the like which is low cost, easily and practically implemented, and safe in use.
[0014] In accordance with the invention there is provided a saddle as defined in the appended claims.
[0015] Further characteristics and advantages of the invention will become better apparent from the description of a preferred, but not exclusive, embodiment of the saddle, particularly for cycles, motorcycles, quadricycles and the like according to the invention, which is illustrated by way of nonlimiting example in the accompanying drawings wherein:

Figure 1 is a perspective view of a saddle, particularly for cycles, motorcycles, quadricycles and the like, which does not form part of the invention, with an element partially sectional;

Figure 2 is a perspective view of a part of a saddle which does not form part of the invention;

Figure 3 is a perspective view of two elements of a saddle, which does not form part of the invention, in an intermediate step of assembly;

Figure 4 is a perspective view of a part of a saddle which does not form part of the invention;

Figure 5 is a partially sectional perspective view of an insert of a saddle, which does not form part of the invention;

Figure 6 is a plan view from above of a part of a saddle, which does not form part of the invention.

1. A saddle, particularly for cycles, motorcycles and quadricycles, which is constituted by:

means of connection of said shell (2) to a frame; and

at least one stratified insert (4) that is integral with said covering (3),

said at least one insert (4) being arranged in the rear portion (7) of said saddle (1) at the points that support the right and left ischial bones of the user,

said at least one insert (4) comprising two layers, a first layer (5) made of polyester or silicone material and a second layer (6) made of polyvinyl chloride,

said at least one insert (4a, 4b) being two in number and being arranged asymmetrically in the rear portion (7) of said saddle (1). 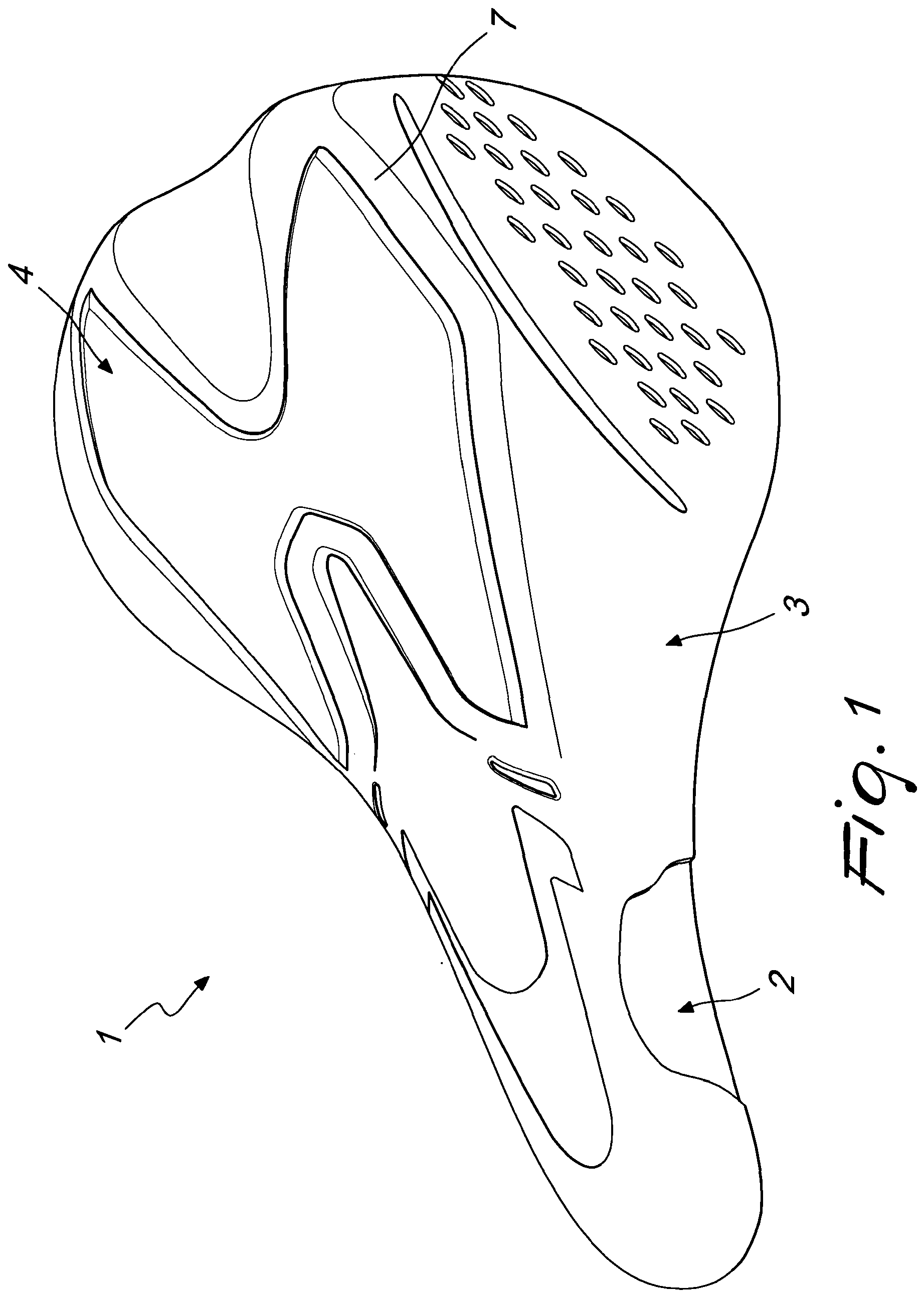 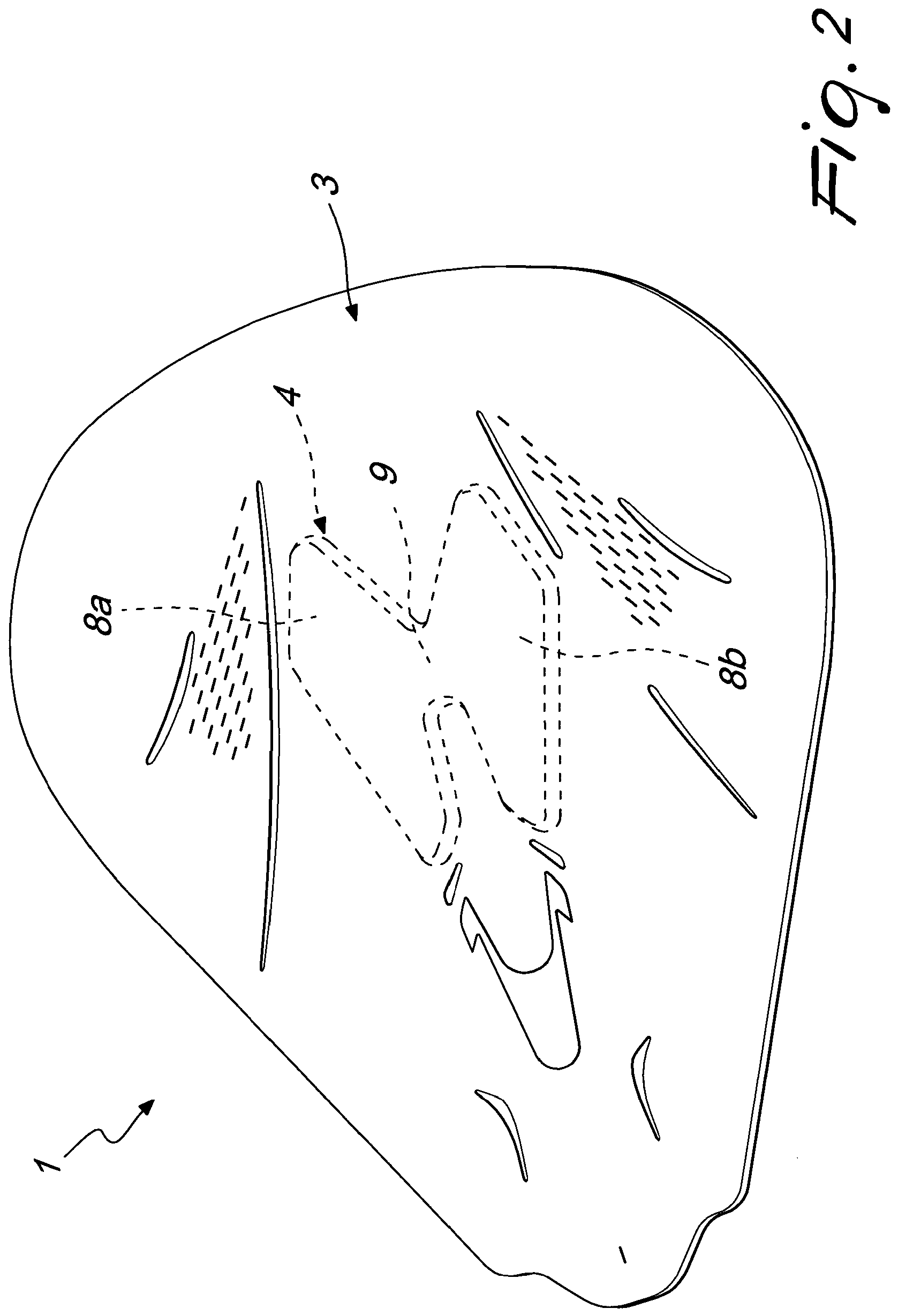 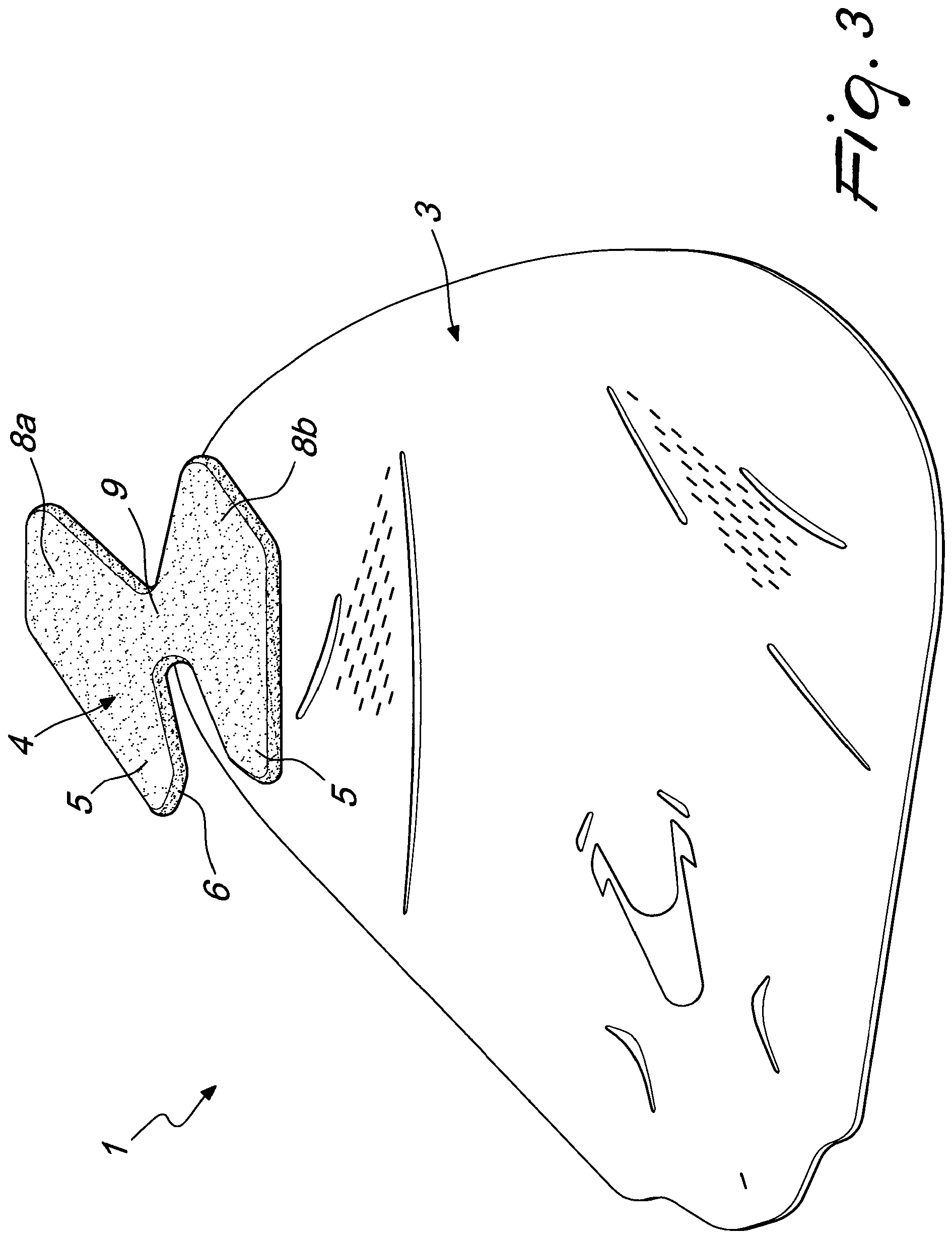 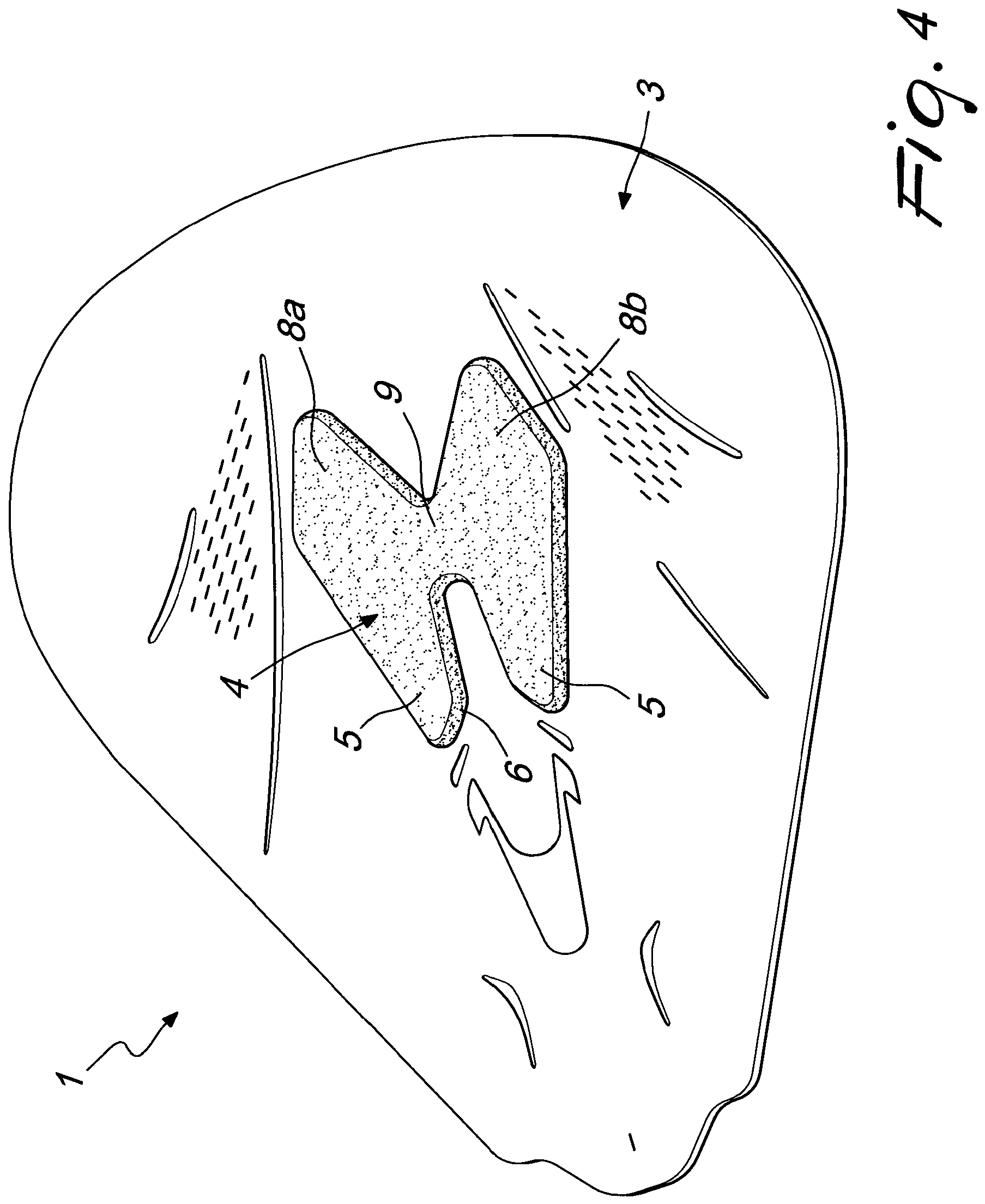 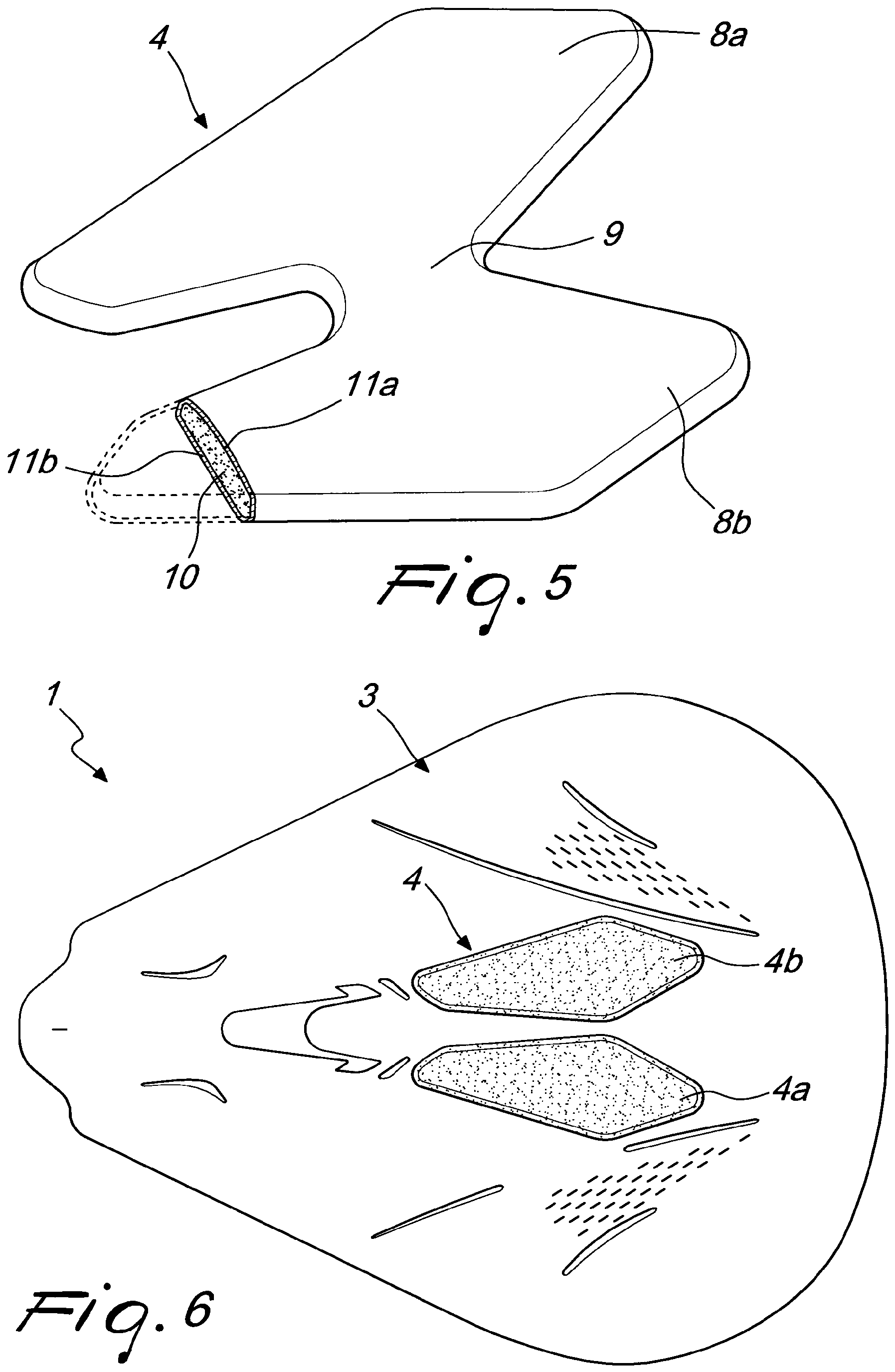