[0001] Implantable defibrillators are designed to deliver an electrical stimulus to terminate certain deleterious arrhythmias. Such devices must be able to correctly identify dangerous arrhythmias (sensitivity). They must also avoid delivering electrical stimulus when not desired (specificity). Attaining high sensitivity and specificity in the discrimination of such deleterious arrhythmias is a challenge.
[0002] Typically treatable arrhythmias include ventricular fibrillation (VF) and/or polymorphic ventricular tachycarrhythmia (PVT). Other arrhythmias can include monomorphic ventricular tachyarrhythmia (MVT), atrial fibrillation (AF), and atrial flutter (Flutter), with the atrial arrhythmias of AF and Flutter deemed supraventricular tachyarrhythmias (SVT). For some patients, MVT is treated by the implantable defibrillator using anti-tachycardia pacing (ATP), while AF and Flutter are typically addressed by other therapies entirely. In addition, patients can experience exercise induced ventricular tachycardia (VT), which is typically not treated at all. Some patients experience bundle branch blocks and other conditions that can arise at elevated rates, causing the signal shape (morphology) of the cardiac signal with each cardiac beat to change relative to morphology at slower rates. Implantable devices are expected to appropriately distinguish these various conditions and apply the correct therapy for only certain conditions.
[0003] Chen et al., in Ventricular Fibrillation Detection By A Regression Test On The Autocorrelation Function, Med Biol Eng Comput.; 25 (3): 241-9 (May, 1987), discuss the use of an autocorrelation function (ACF) to identify ventricular fibrillation in which the ACF is performed. Chen et al. hypothesize that the peaks in the ACF output are expected to be periodic and/or regular and should pass a linear regression test when a ventricular tachycardia (VT) is occurring. Therefore, the results of the ACF are subjected to a linear regression analysis and VF is declared if the linear regression fails to find a linear fit. Chen et al. limit their analysis to VF and VT and do not address the fact that the linear regression they discuss would also likely fail for supraventricular arrhythmias such as atrial flutter or atrial fibrillation for which defibrillation therapy is typically not desired. Moreover, adding a linear regression test with ACF would create a very large computational burden for an implantable system.
[0004] Sweeney et al., in US Patents 8,409,107 and/or 8,521,276 discuss the use of an ACF applied to a transformation of detected cardiac signal using curve matching. The ACF would be applied to identify recurring curves. Such recurring curves could be used to find heart beats from the transformed signal, which could be used to calculate rate. ACF is not directly applied to the time varying cardiac signal, however.
[0005] ACF in each of these examples involves a large number of computational steps to be calculated. To make ACF more useful in an implantable device, simplified methods and alternative methods which address the spectrum of potential arrhythmias are desired.

[0006] The present inventor has recognized, among other things, that a problem to be solved can include the incorporation of a modified autocorrelation function into an implantable cardiac device. Modifications can be made to reduce the computational burden of the correlation function and accommodate some of the difficulties which arise in the context of an implantable device monitoring cardiac function. The present subject matter can help provide a solution to the problem of enhancing sensitivity and specificity in implantable cardiac rhythm management devices.
[0007] The present invention comprises several separately implementable elements which provide avenues for reliable use of ACF at lesser computational burden in an implantable device.
[0008] In a first aspect, the invention comprises a set of rules for the calculation of a Minimum Absolute Difference (MAD) function to construct a Self Correlation. The use of MAD facilitates a far simpler and less computationally intensive manner of analyzing the cardiac signal than ACF.
[0009] In a second aspect, the invention comprises a set of rules for the identification and selection of candidate peaks within a Self Correlation or ACF to yield an estimate of heart rate.
[0010] In a third aspect, the present invention comprises a set of rules for tracking cardiac rate over time using output peaks from either a Self Correlation or ACF.
[0011] The first, second and third aspects may each be used independent of the other aspects, or in any suitable combination such as first-second, first-third, or second-third.
[0012] In a fourth aspect, the present invention comprises an integrated system or method in which a simplified Self Correlation of the first aspect is combined with the second and third aspects.
[0013] In various embodiments, devices and methods may use any of the first through fourth aspects either on a continuing basis or following a triggering event.
[0014] The present disclosure is, in certain examples, directed to enhancements that aid in selecting peaks within the results of a self-correlation function. The self-correlation function can take the form of a simplified ACF, such as an MAD, including for example methods of US Provisional Patent Application No. 62/038,440, titled CALCULATION OF SELF-CORRELATION IN AN IMPLANTABLE CARDIAC DEVICE, though the results of more complex calculations can also be used. Tracking analysis, such as that in US Provisional Patent Application No. 62/038,437, titled CARDIAC RATE TRACKING IN AN IMPLANTABLE MEDICAL DEVICE, may use the results of peak selection to provide a rate estimate for use in therapy and other decisions over time, with added confidence based on repeated peak selection. However, other examples omit tracking and select from available peaks of the self-correlation function to provide estimated cardiac rates
[0015] The peak selection enhancements assist in the generation of a rate output from data which can be variable in response to noise and other inputs which can complicate the extraction of cardiac rate from signals detected by an implantable system. Beyond noise and extraneous inputs, the cardiac signal itself can be variable, particularly given that implantable systems are provided to patients having a variety of cardiac diseases or abnormalities which take various forms and states.
[0016] This overview is intended to provide an overview of subject matter of the present patent application. It is not intended to provide an exclusive or exhaustive explanation of the invention. The detailed description is included to provide further information about the present patent application.

Figures 4-5 illustrate the analysis of data using a self-correlation function and differentiate such analysis from ACF;

Figure 15 illustrates a high rate peak test for the peak selection in Figure 6;

Figure 16 illustrates an analysis to identify a bigemini pattern and correct rate analysis;

Figure 19 is a block flow diagram for an overall method of cardiac signal analysis.

peak selector means for identifying amplitude peaks in the self-correlation function and finding a first estimate of cardiac rate and first affiliated confidence having ratings of at least low or high confidence; wherein:

the peak selector means comprises picket test means for determining whether, for a selected peak having a first lag depth in the self-correlation function of a given iteration, at least one additional peak appears at a second lag depth that is a multiple of the first lag depth; and

identify a quantity of candidate peaks using peaks of the self-correlation function;

select as a first candidate peak one of the following:

a candidate peak having an amplitude that is larger than that of the candidate peak with the least lag depth by at least a first margin and which corresponds to a cardiac rate exceeding a rate threshold;

2. An implantable medical device system (12, 14, 32, 34) as in claim 1 wherein the peak selector means further comprises dominant peak testing means for determining whether any of the candidate peaks exceeds all other peaks by at least a second margin, wherein the peak selector means is operable to use the dominant peak testing means to attempt to identify a peak suitable to estimate cardiac rate if no candidate peak is found suitable by the picket test means.

decision means for taking results from each of the R-wave detection means and the peak selector means and determining whether a therapy is needed;

wherein the decision means is configured to accept an estimated cardiac rate reported by the peak selector means based on a dominant peak as more reliable than a rate generated by the R-wave detection means.

5. An implantable medical device system (12, 14, 32, 34) as in either of claims 1 or 2 wherein the candidate selection means is configured to select a predetermined quantity of the largest peaks in the self-correlation function; and the peak selector means further comprises large tachycardia peak check means for determining whether a peak in the self-correlation function at a depth corresponding to a tachycardia rate is within a third margin of the largest peak in the self-correlation function and, if so, the peak selector means is configured to submit the peak identified by the large tachycardia peak check means to the picket test means to determine whether it is suitable to estimate cardiac rate.

6. An implantable medical device system (12, 14, 32, 34) as in any of claims 1-3 further comprising tracking means for tracking outputs of the peak selector means to generate a cardiac rate estimate therefrom.

7. An implantable medical device system (12, 14, 32, 34) as in claim 6 further comprising reporting means for identifying and reporting any peak in the self-correlation function that is greater than a reporting threshold to the tracking means.

decision means for taking results from each of the R-wave detection means and the tracking means and determining whether a therapy is needed.

decision means for taking results from each of the R-wave detection means and the peak selector means and determining whether a therapy is needed.

11. The implantable medical device system of claim 10 wherein the decision means is configured to treat a result from the peak selector means as more reliable than a result from the R-wave detection means if a rate estimate reported by the peak selector means is based on a candidate peak identified by the picket test means as suitable to estimate cardiac rate.

13. An implantable medical device system (12, 14, 32, 34) as in any of claims 1-12 wherein the peak selector means is configured to determine whether there are any peaks in the self-correlation function greater than a tachy threshold located within a lag depth of less than a tachy lag threshold and, if so, to set a flag for possible tachyarrhythmia.

14. An implantable medical device system (12, 14, 32, 34) as in any of claims 1-13 wherein the peak selector means further comprises Bigemini identification means for identifying a Bigemini pattern among a set of peaks in the self-correlation function.

15. An implantable medical device system (12, 14, 32, 34) as in any of claims 1-14 wherein the peak selector means further comprises Jitter identification means for identifying a jitter pattern among a set of peaks in the self-correlation function. 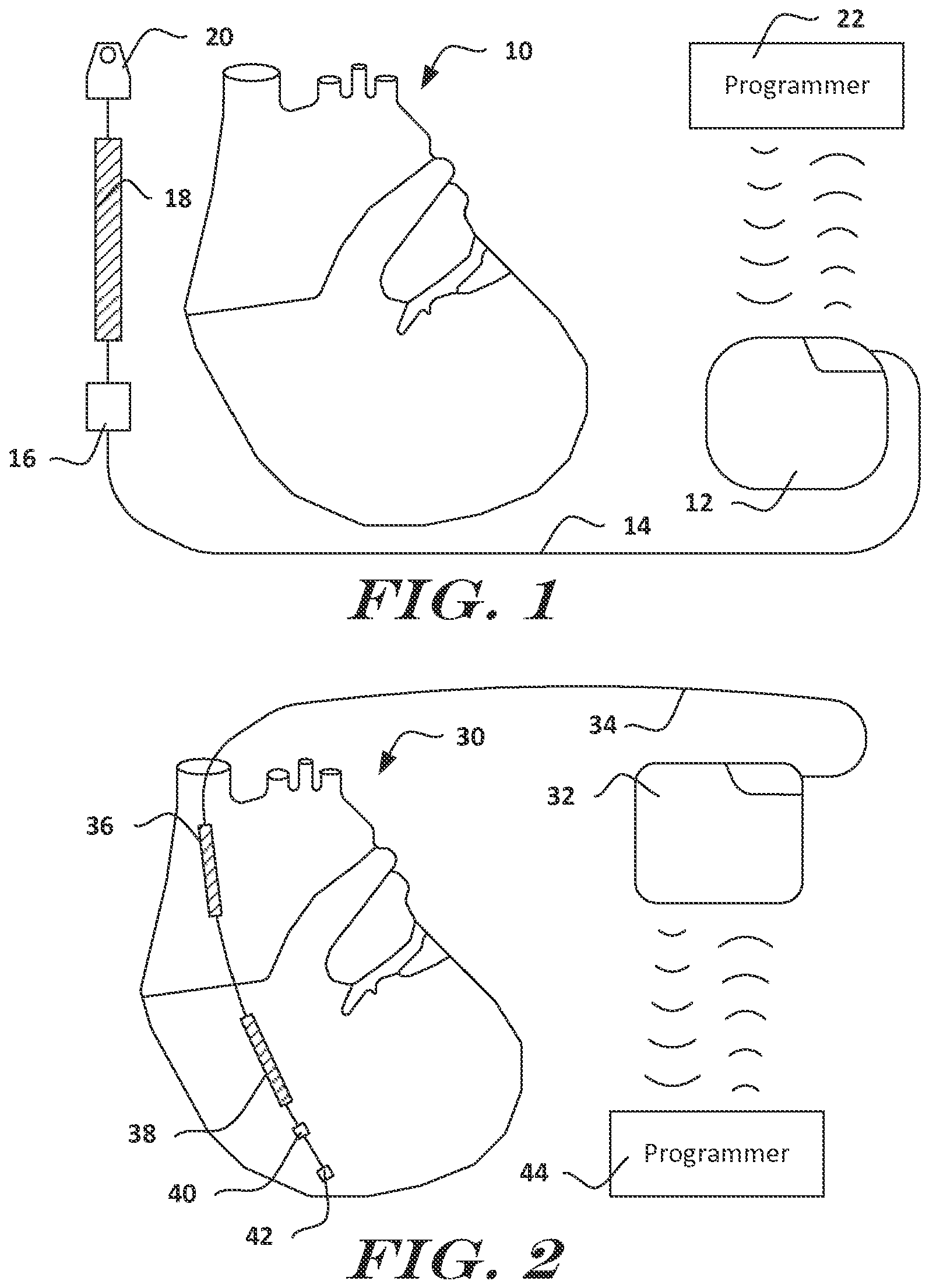 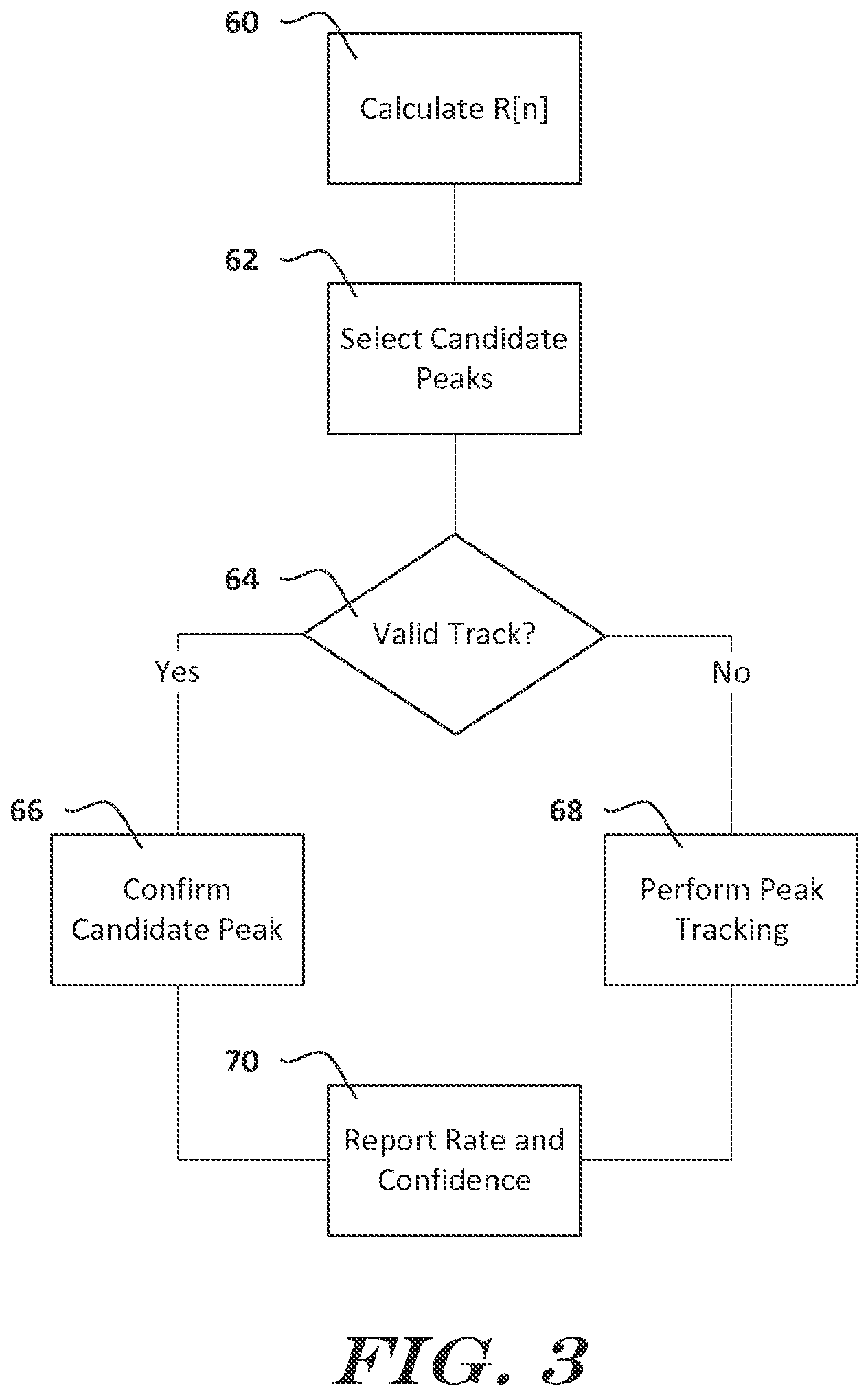 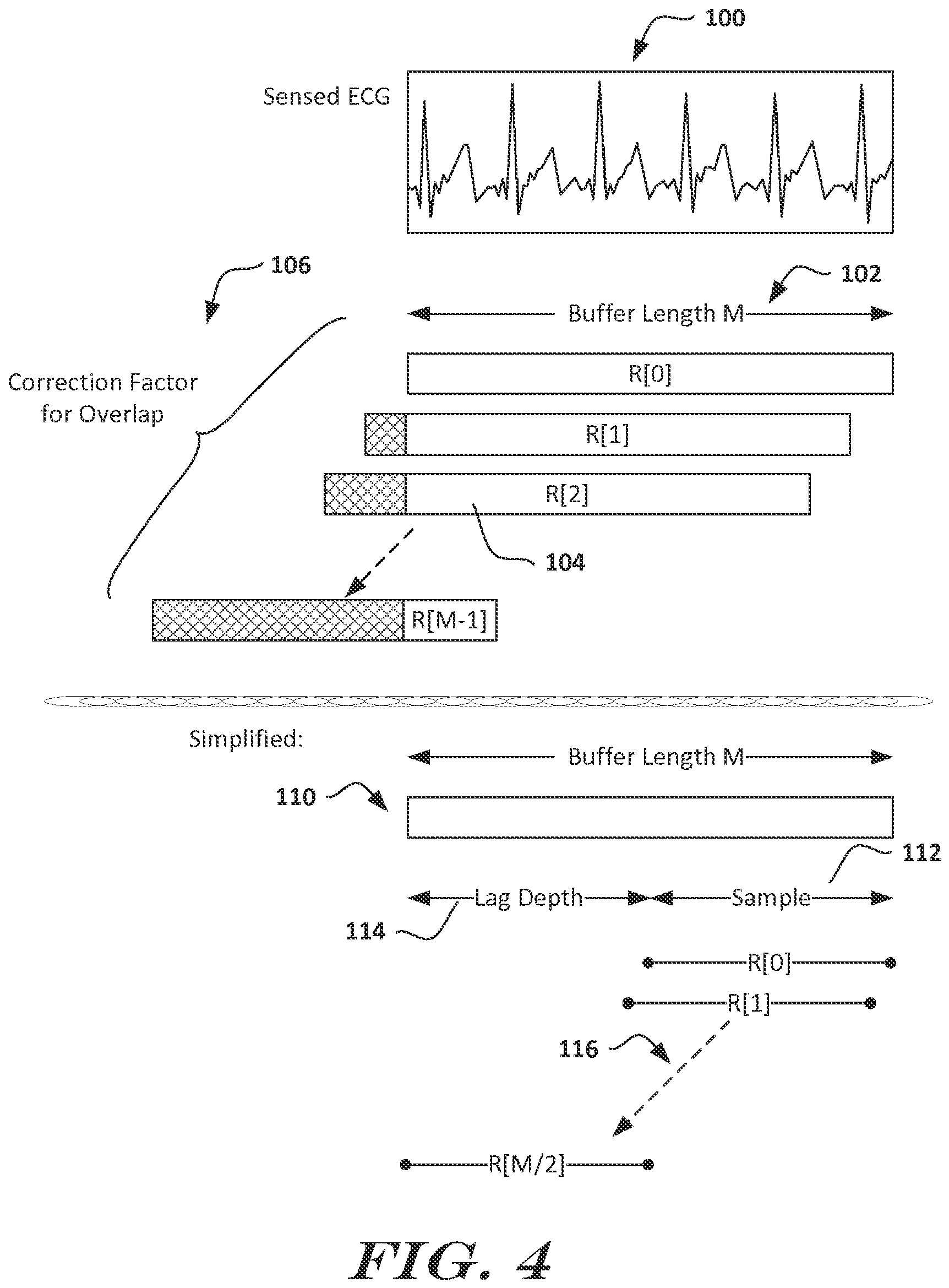 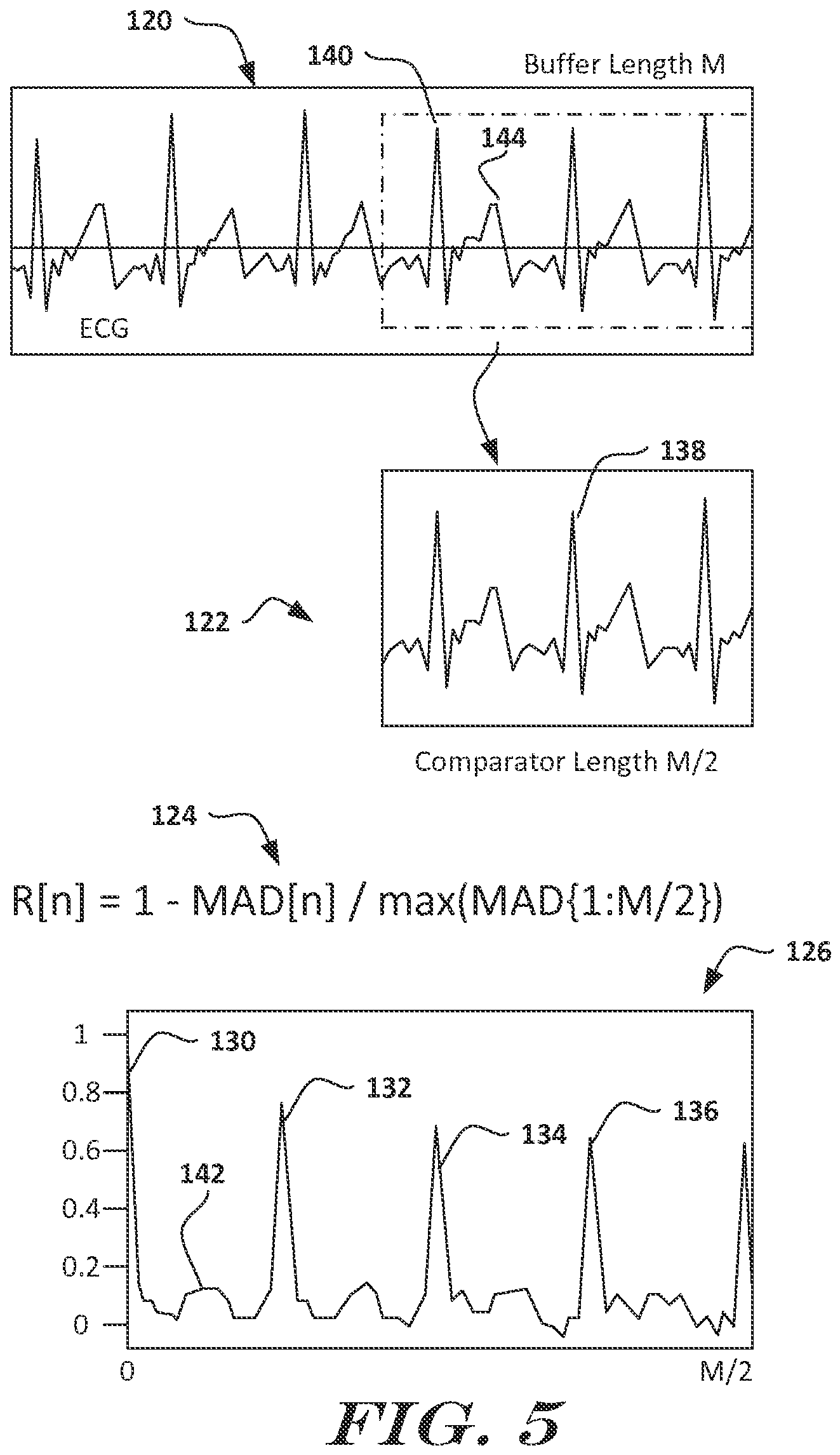 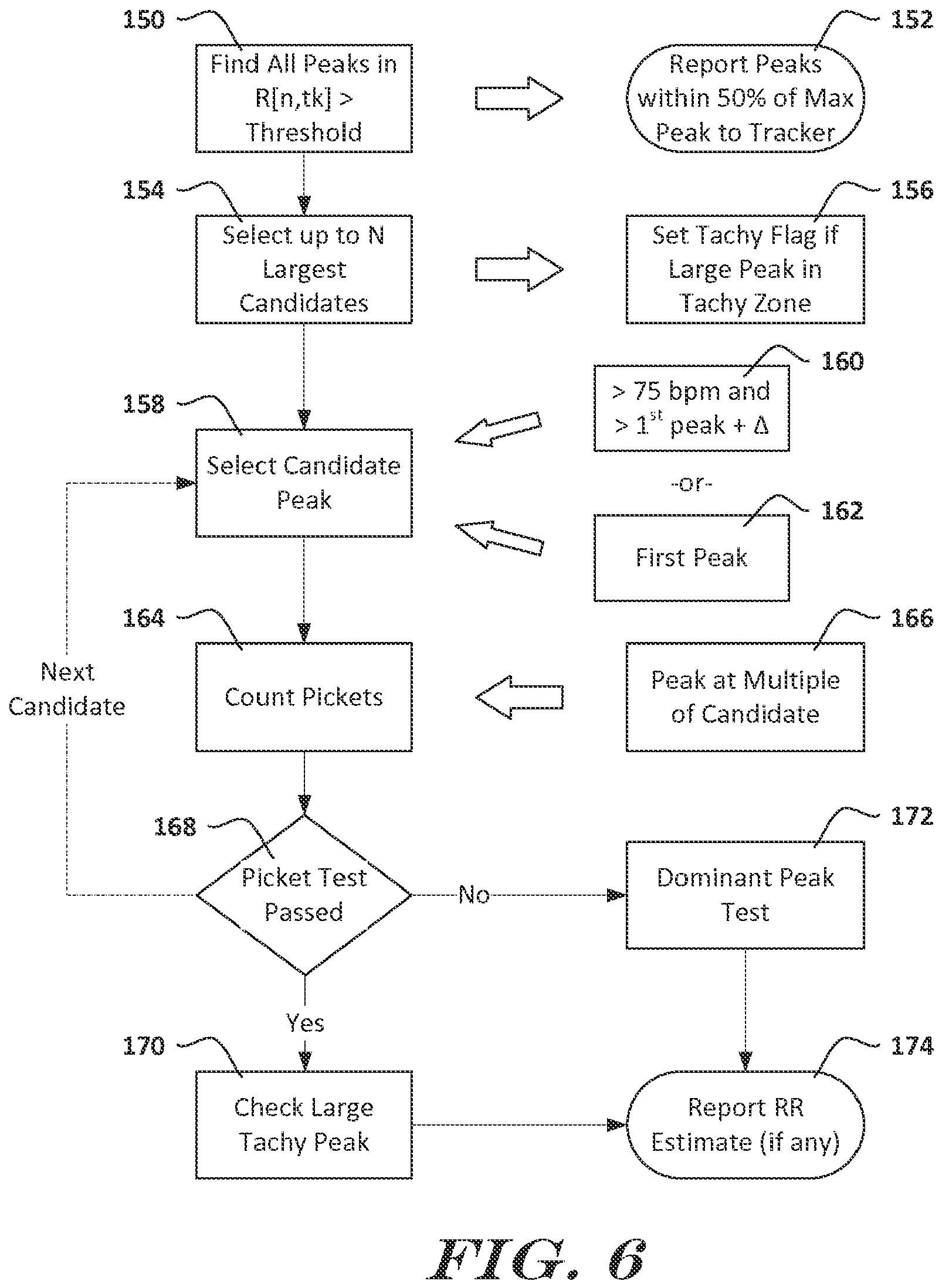 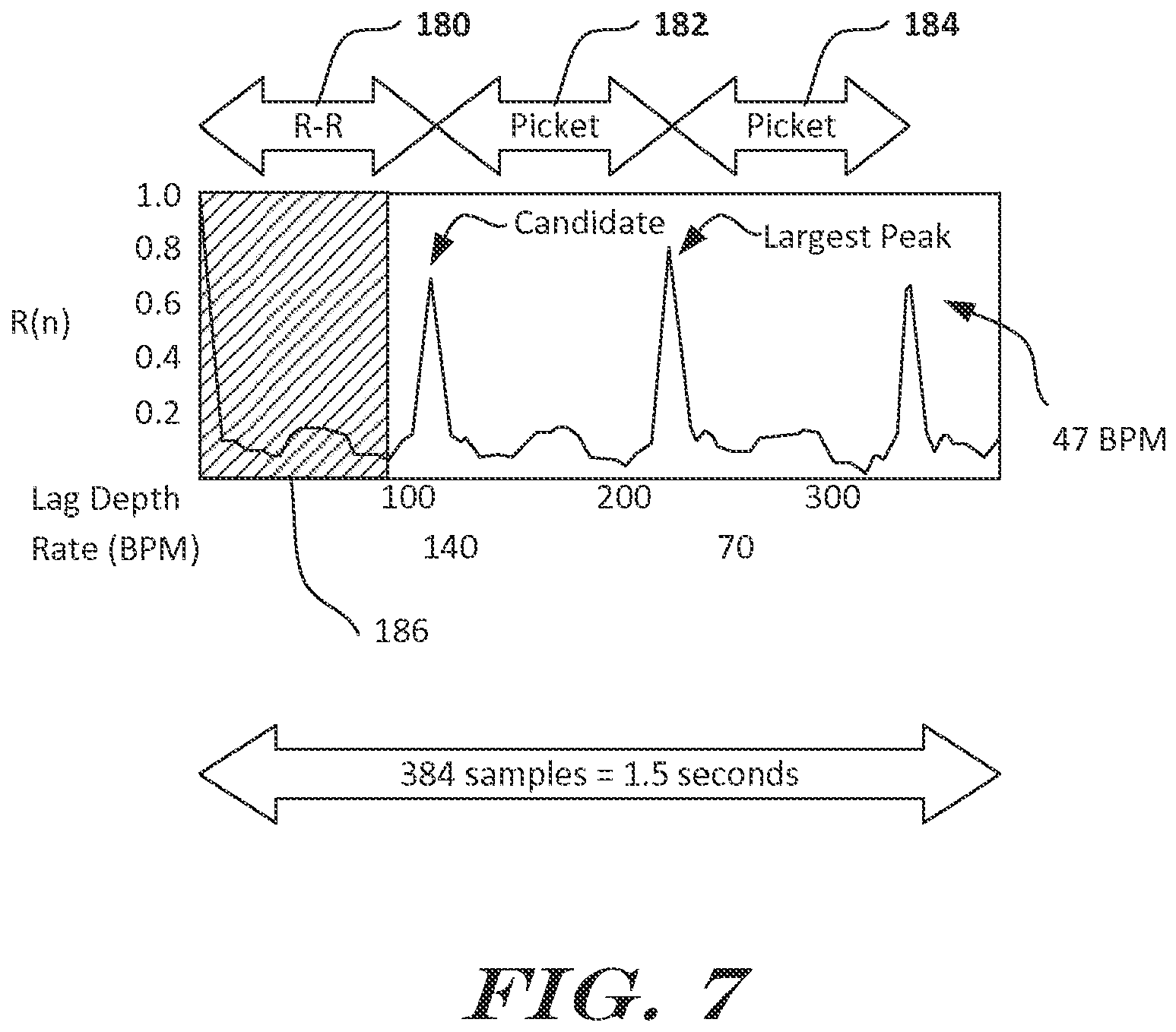 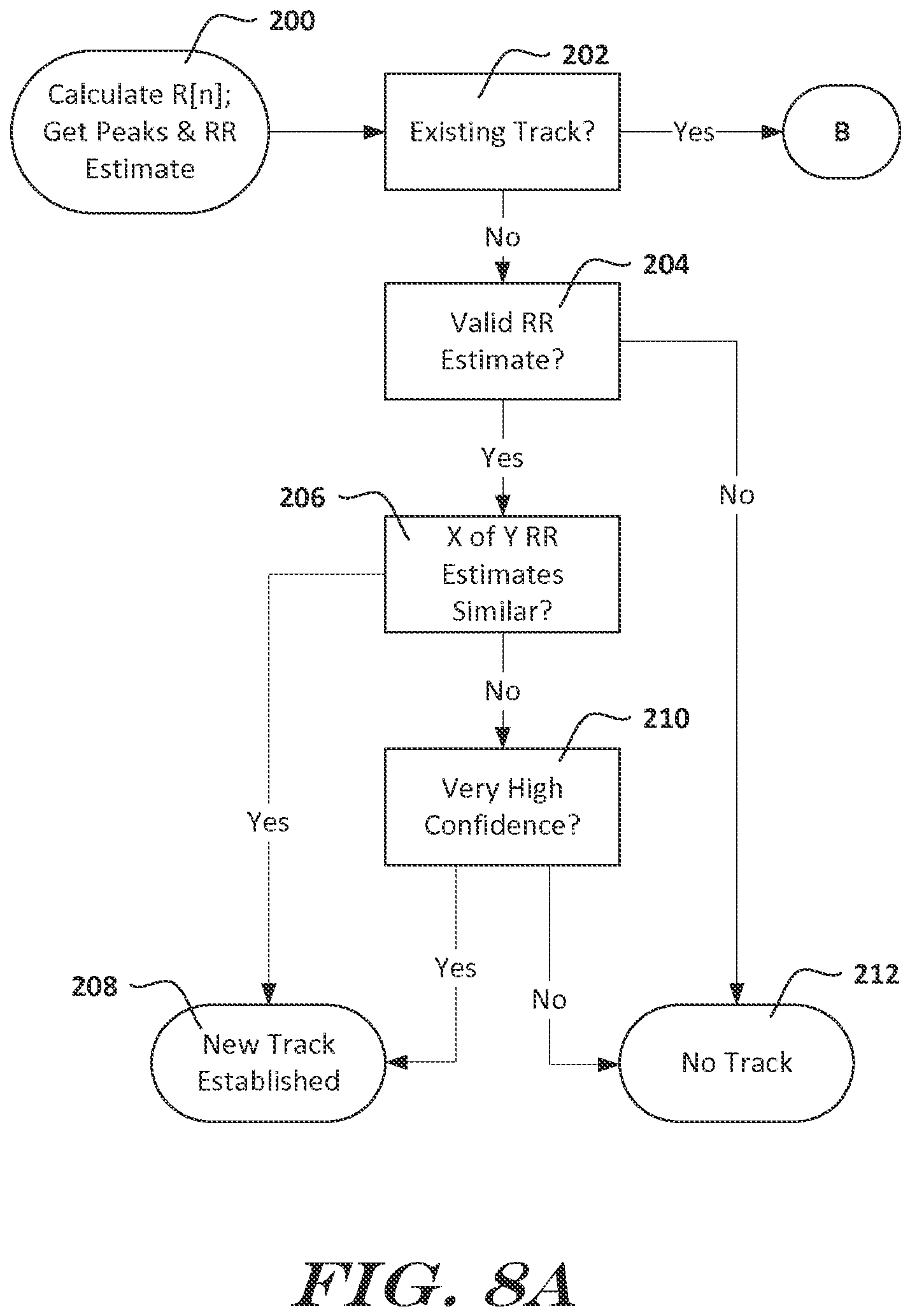 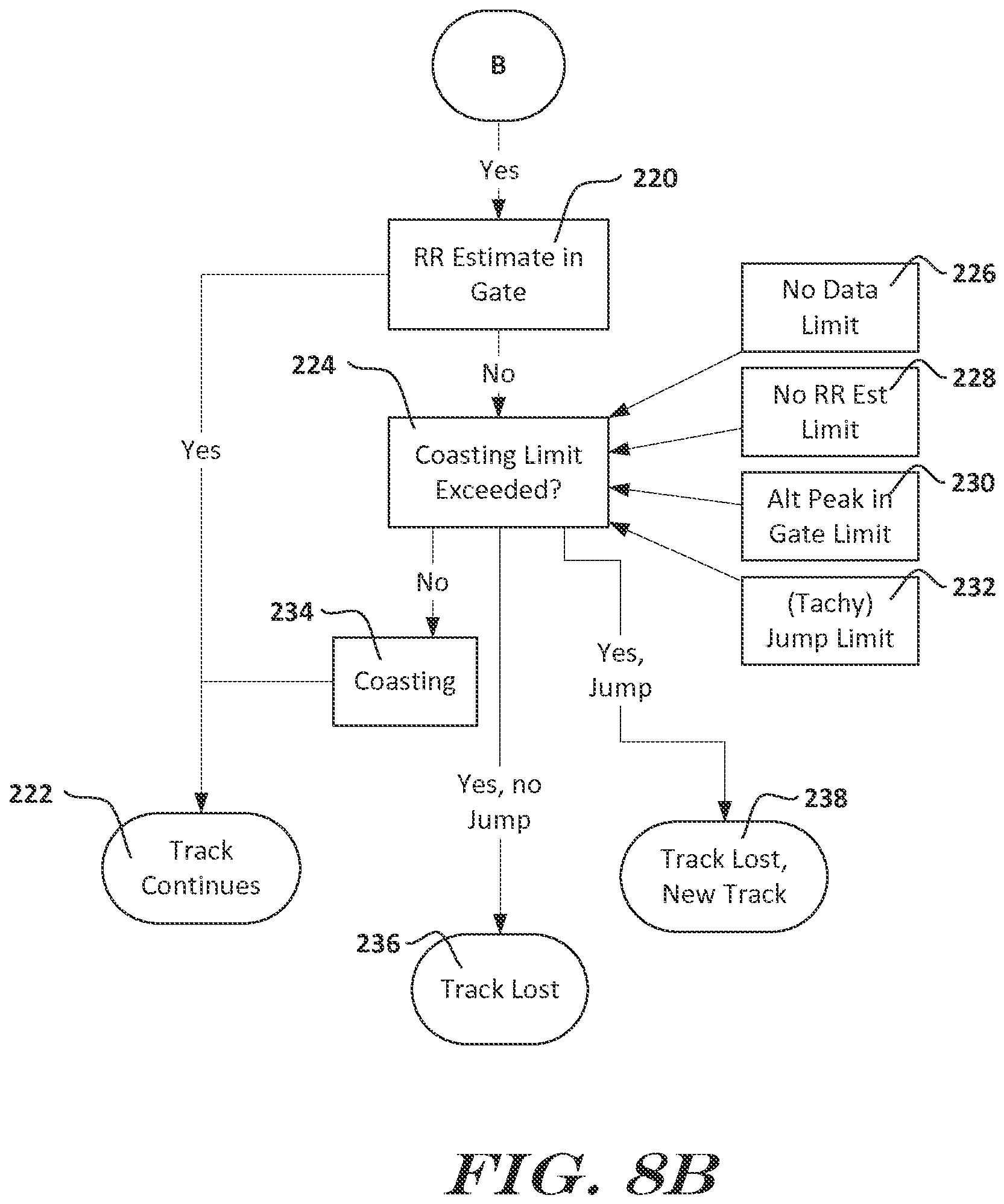 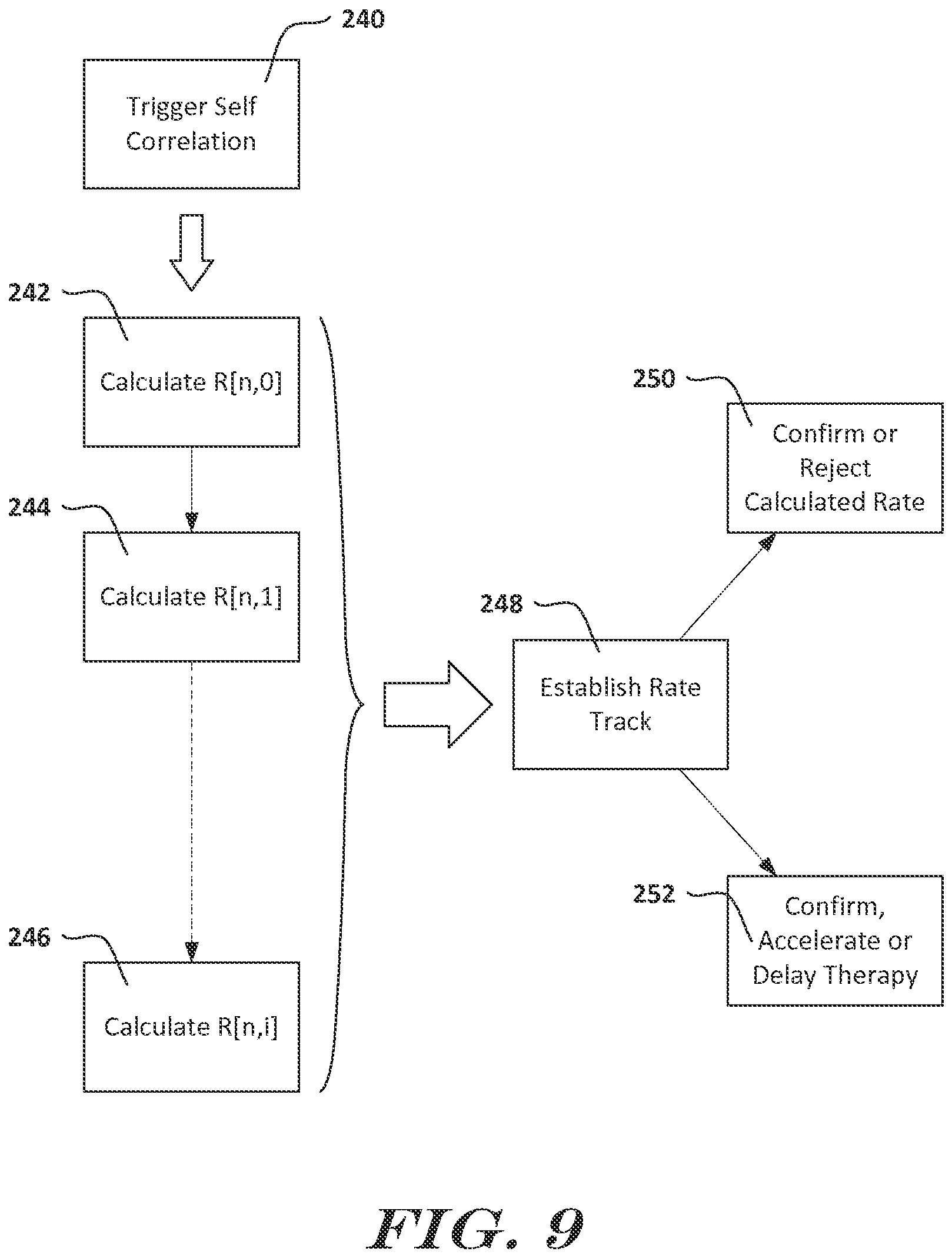 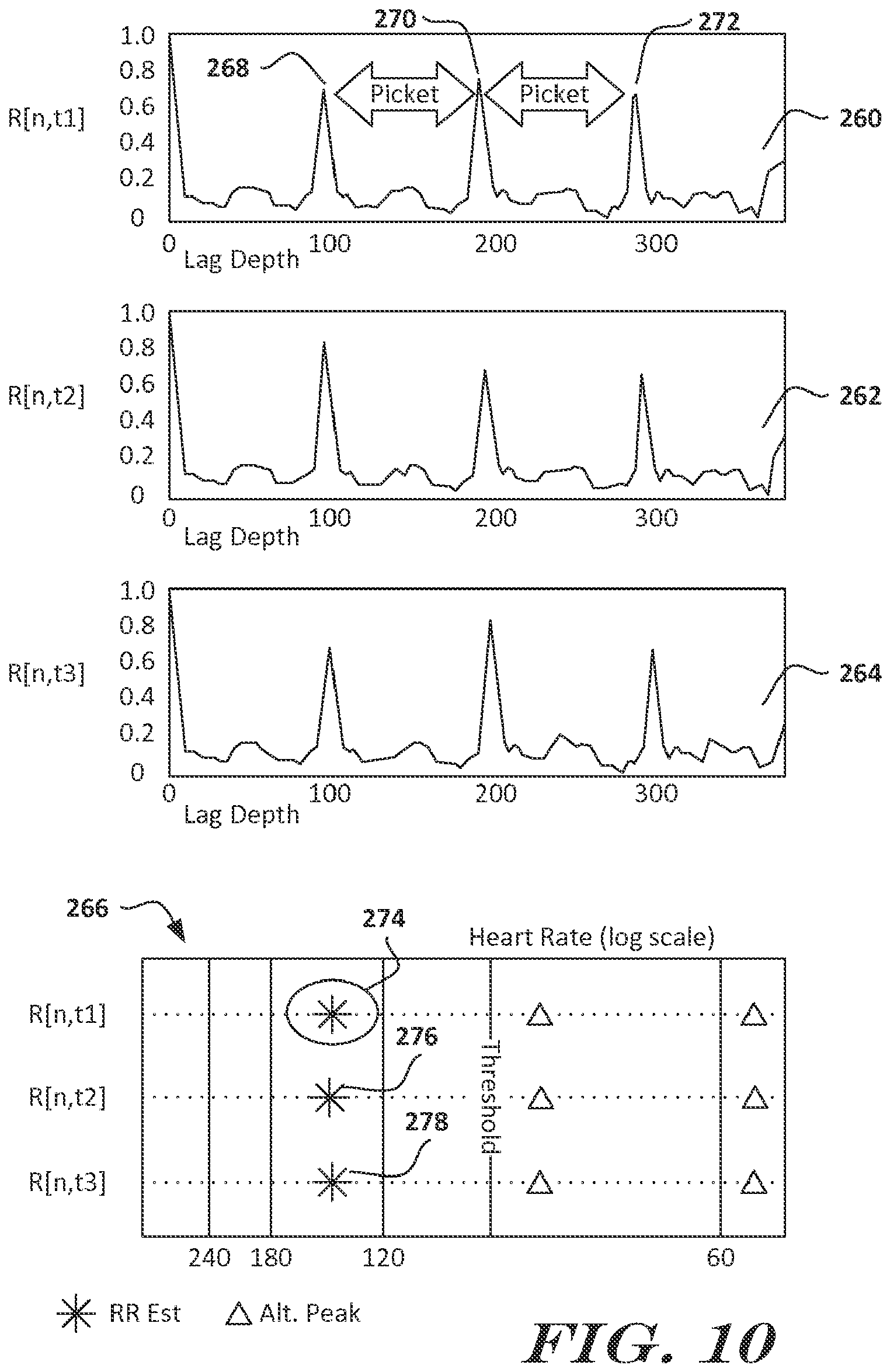 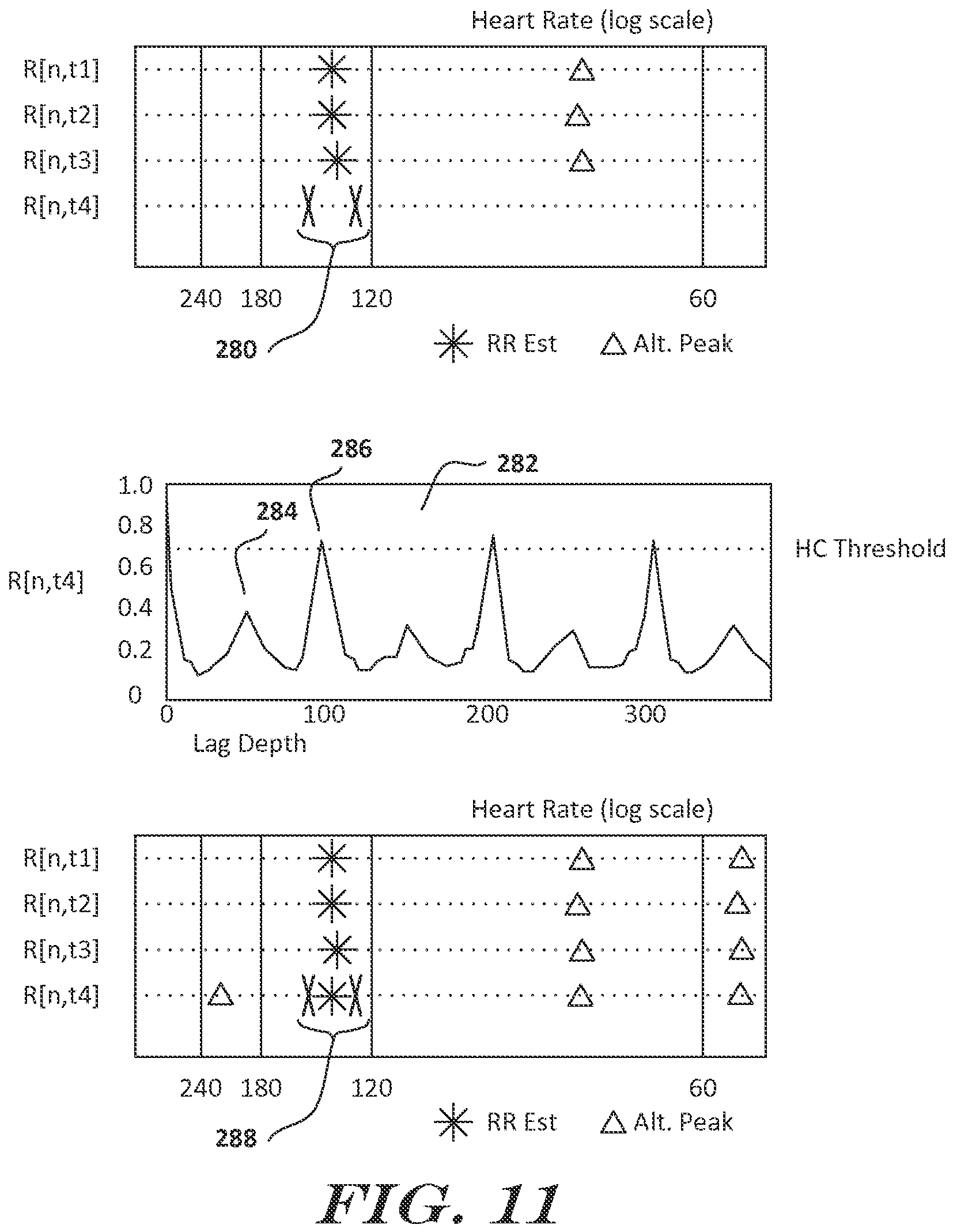 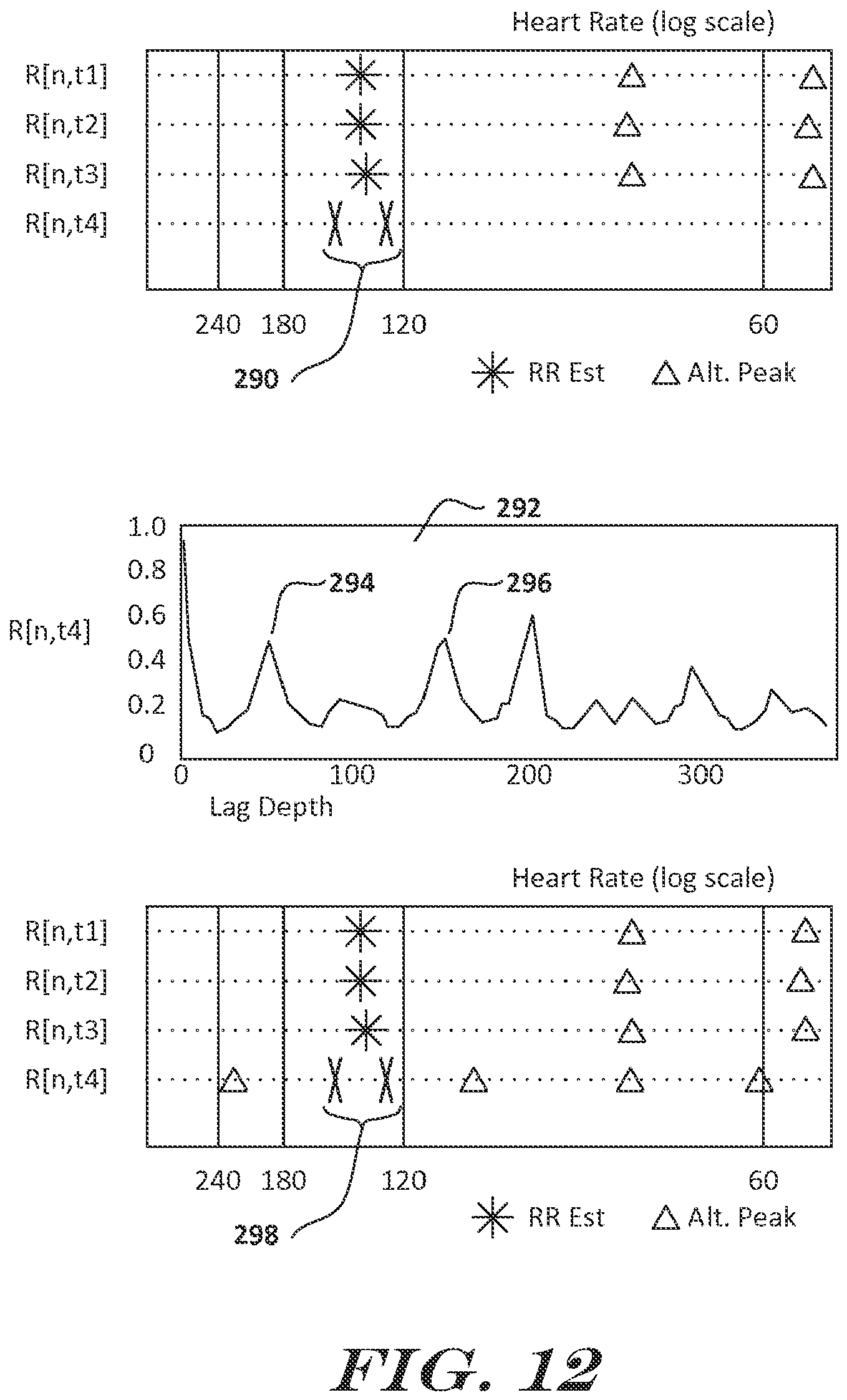 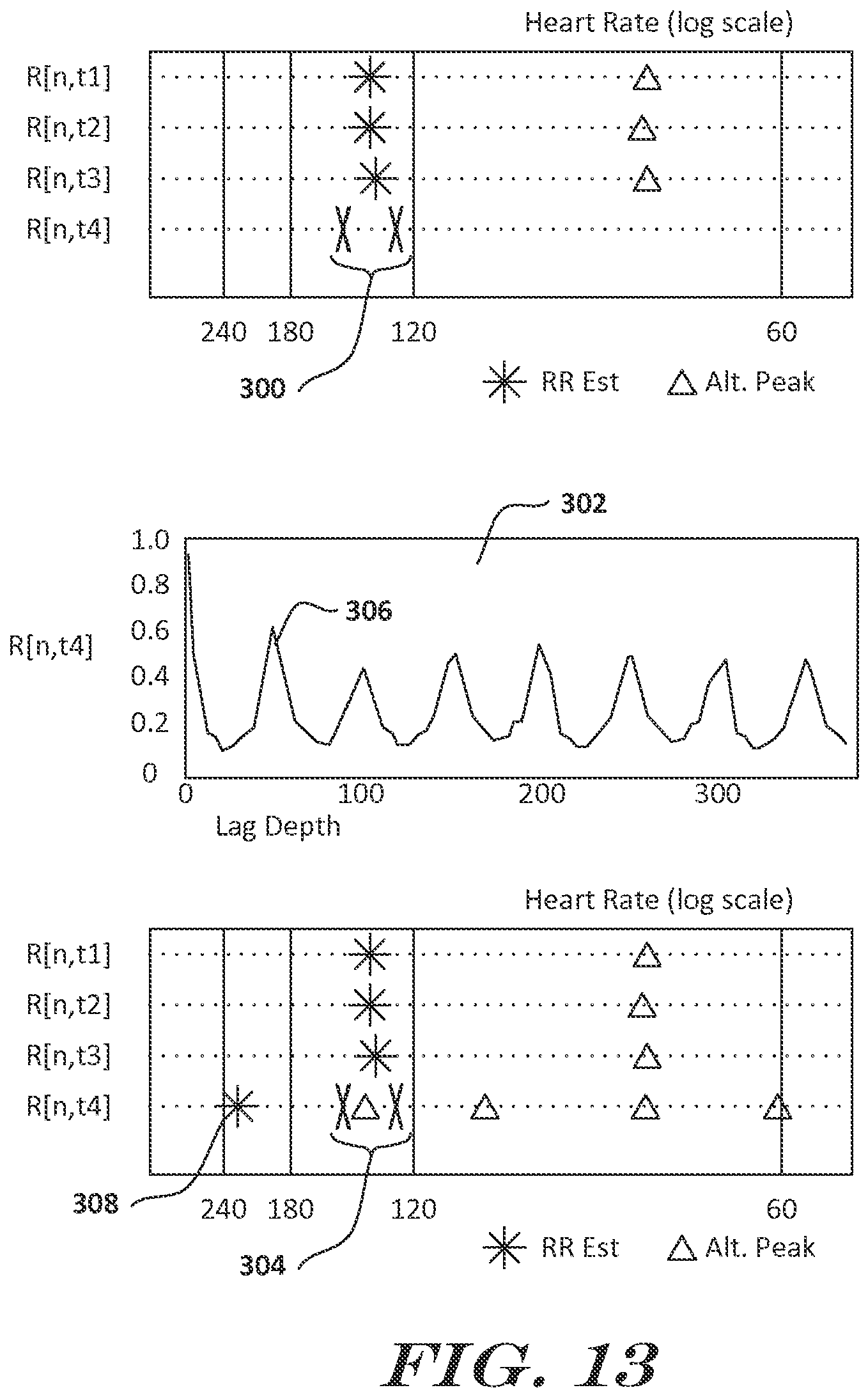 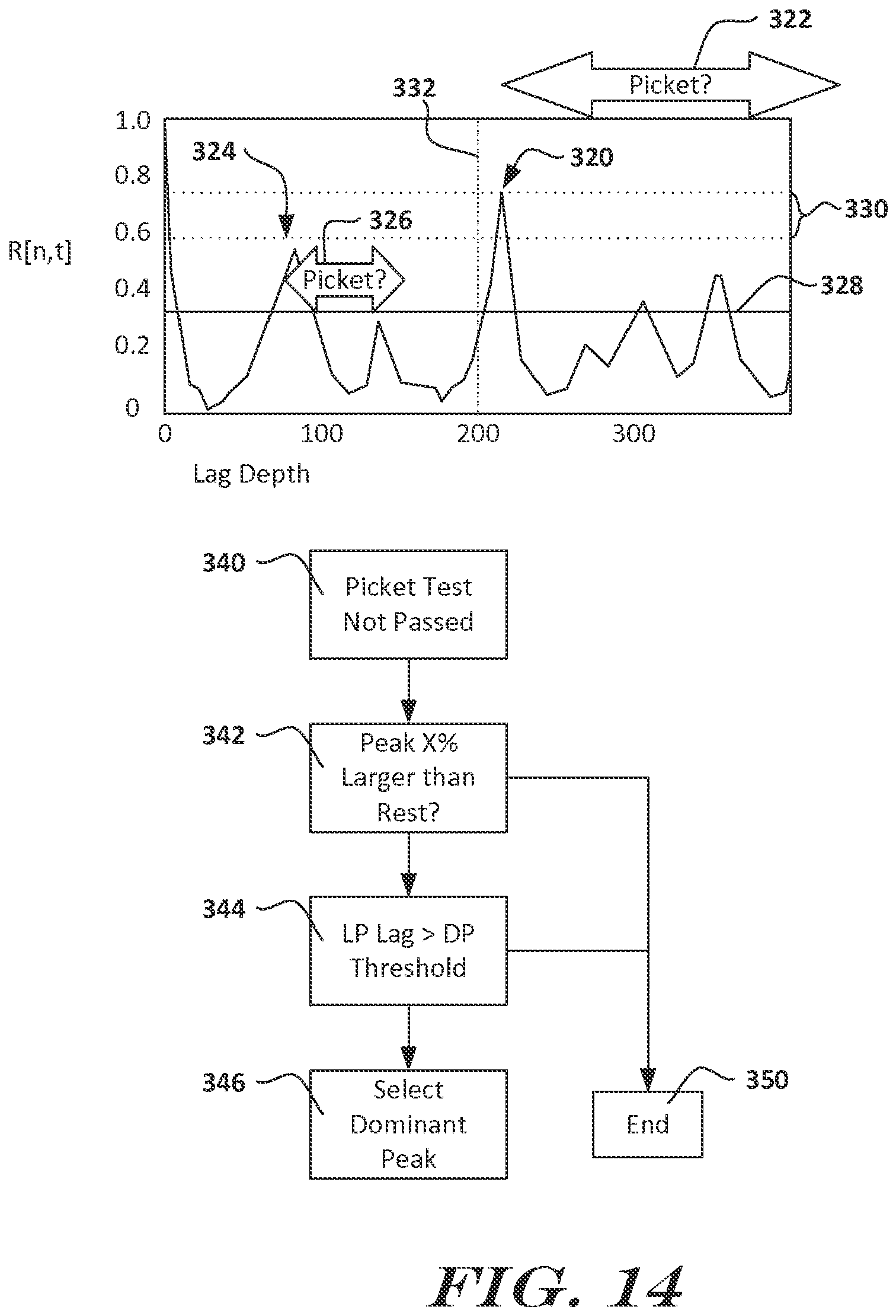 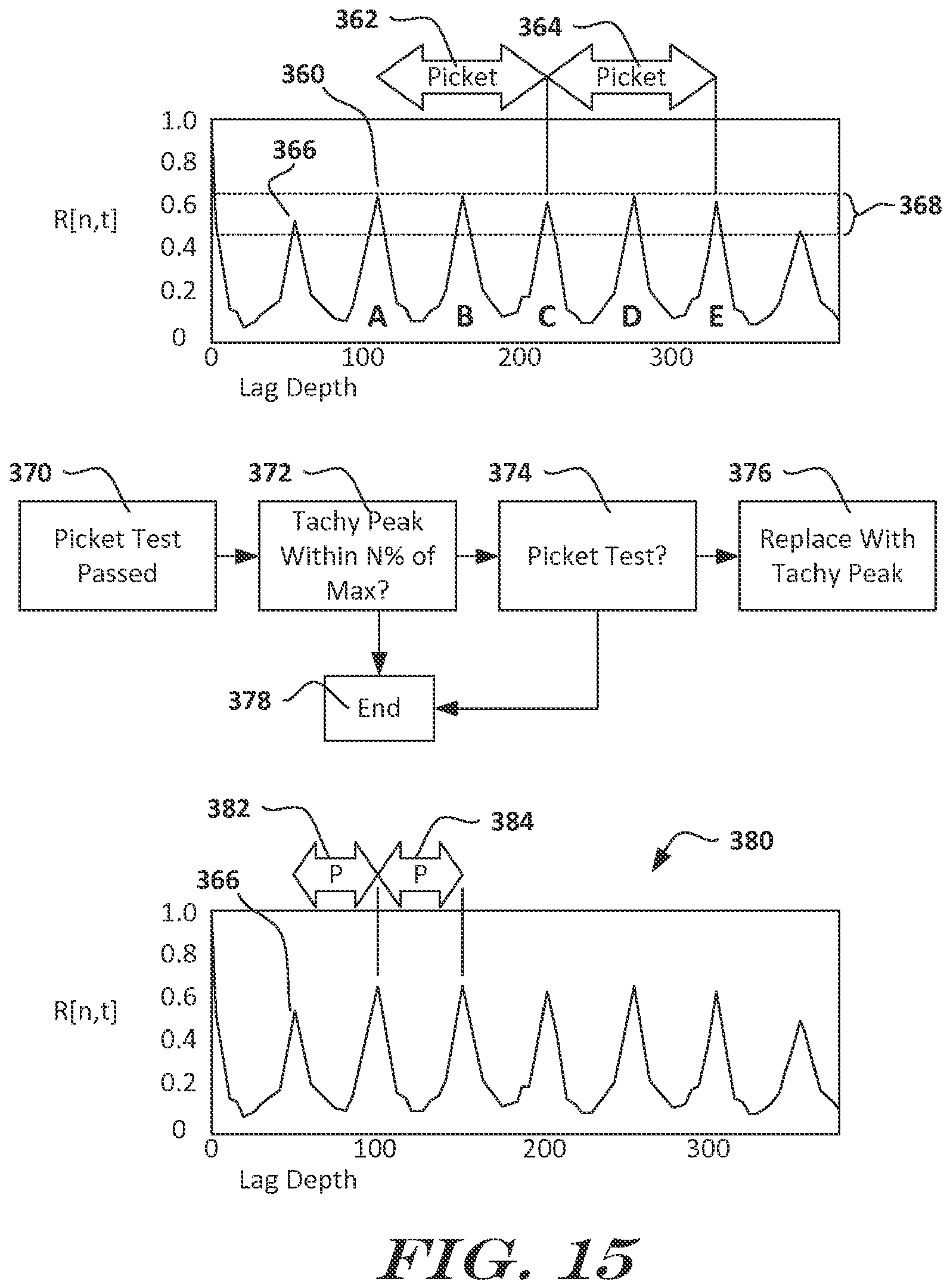 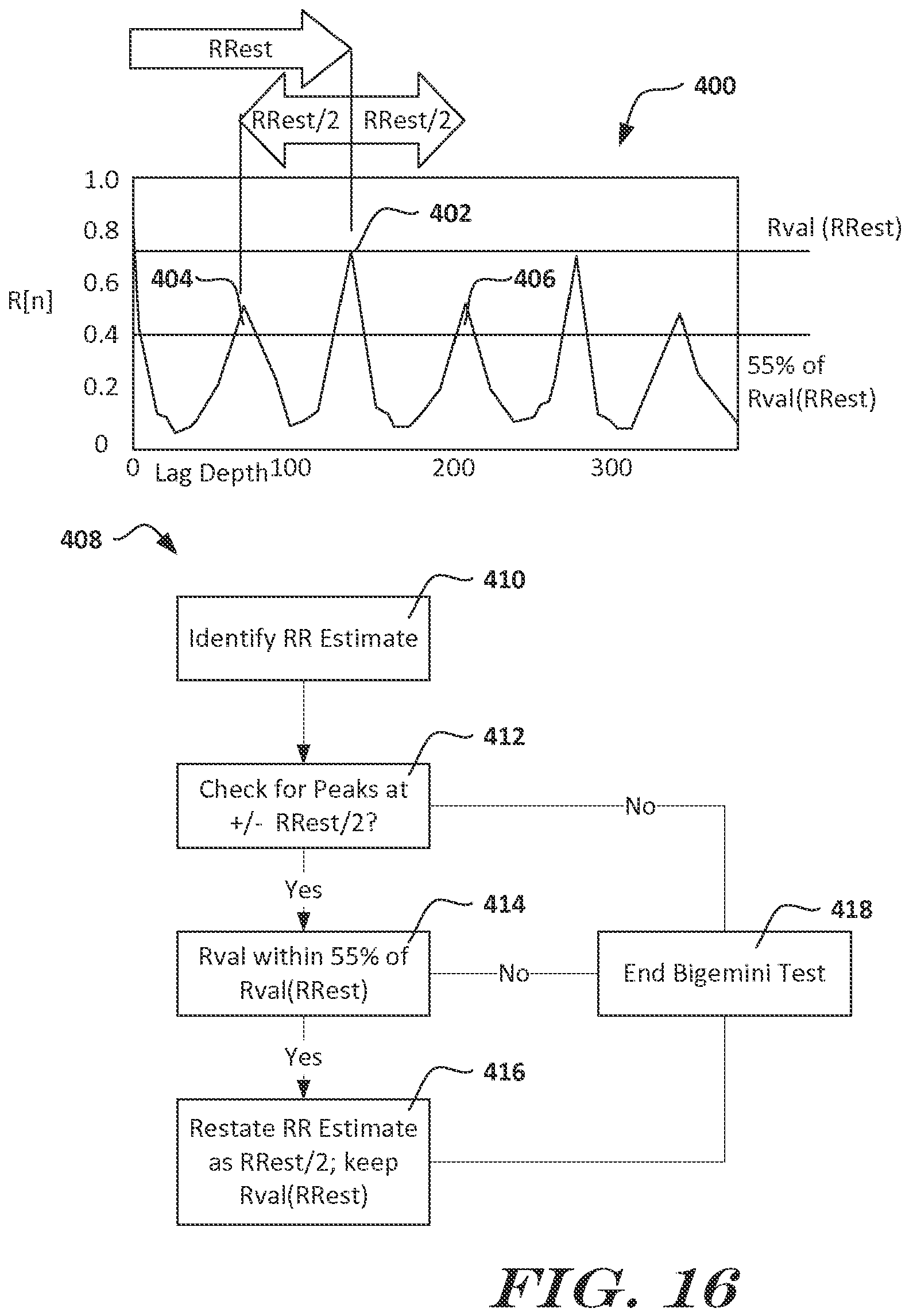 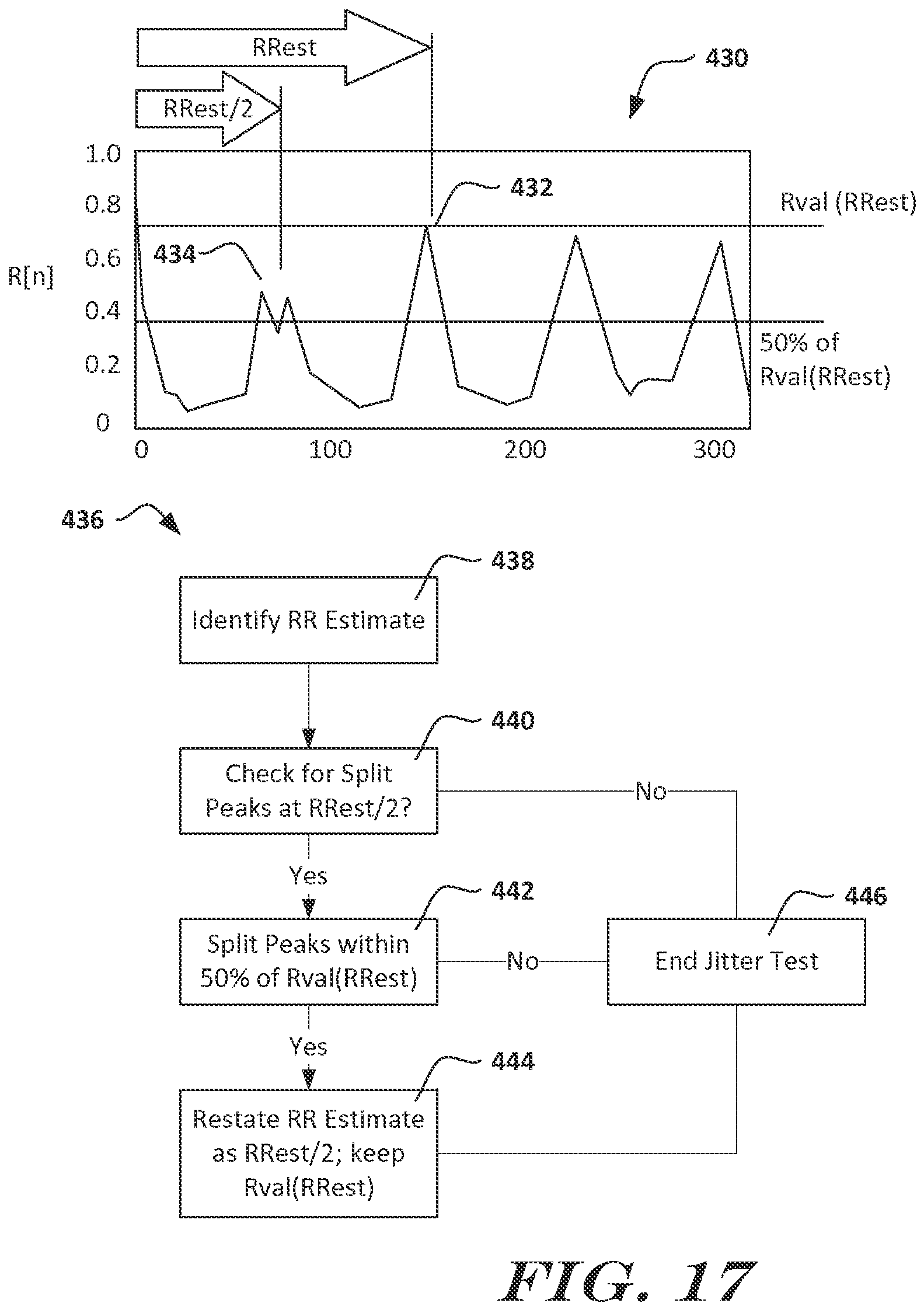 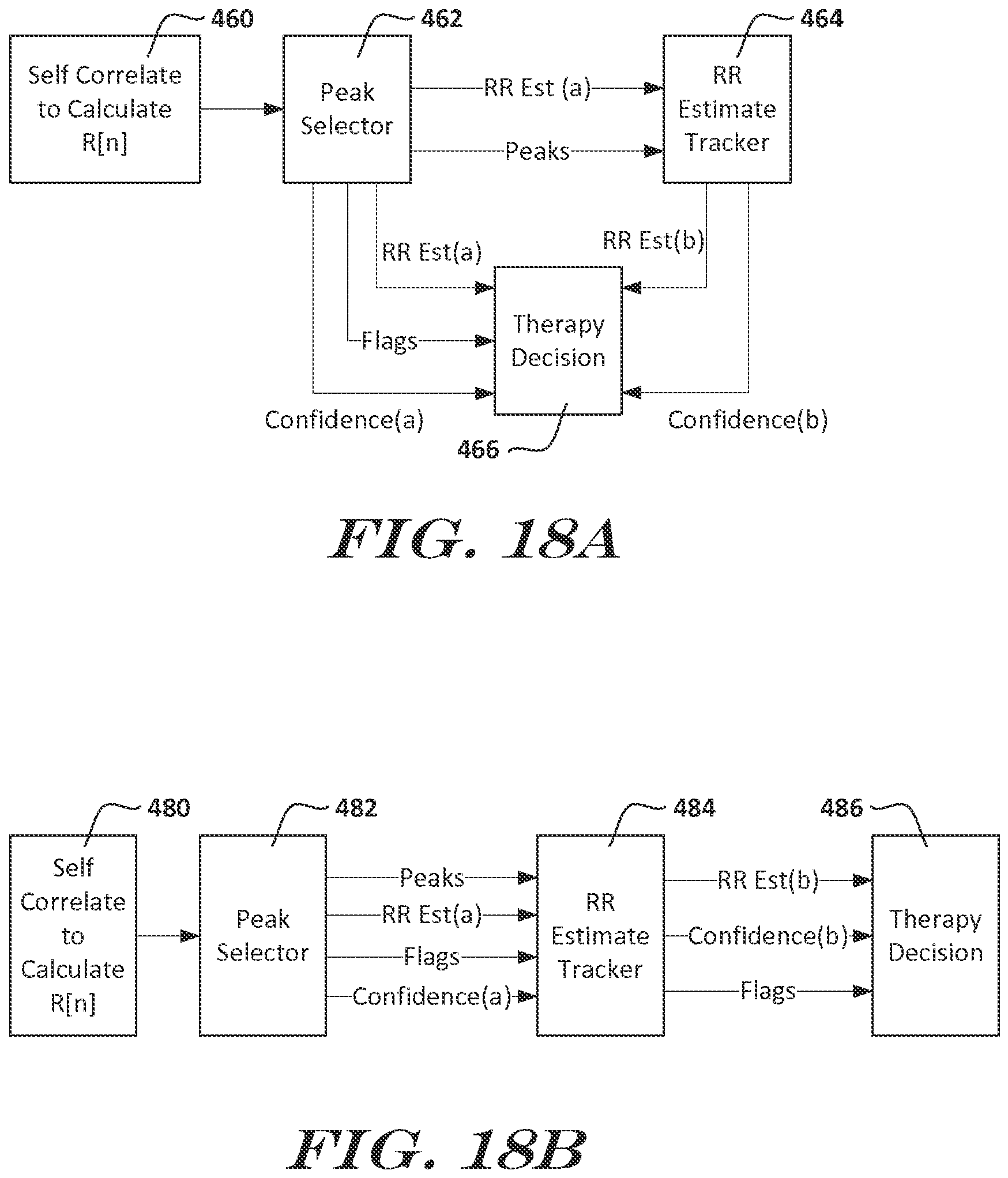 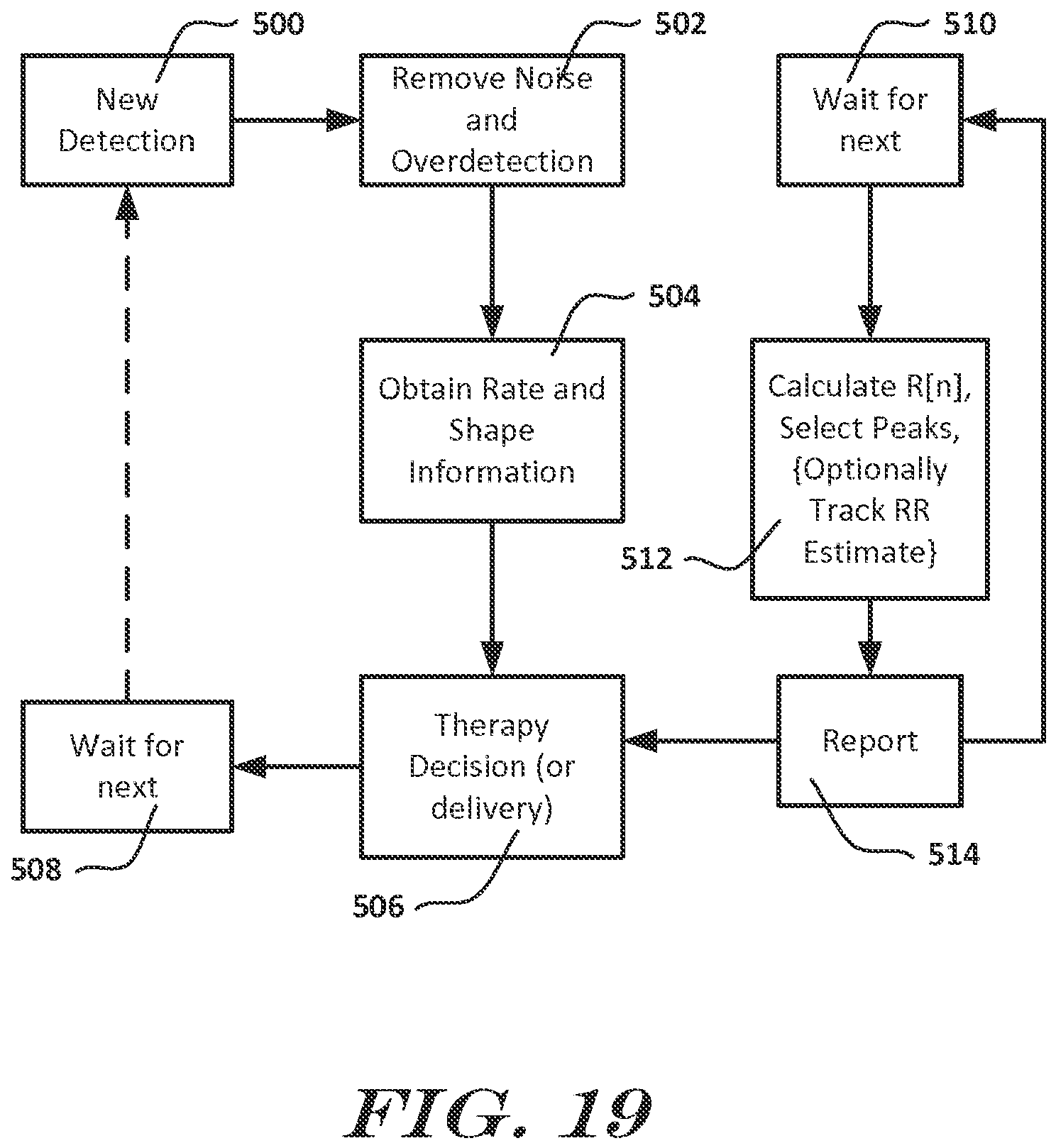