Fig, 2 shows safety-circuit is based on a One out of Two (1oo2) architecture

[0015] A railway brake system for a freight train comprises a main brake pipe which is in fluid communication with a brake distributor, which brake distributor is fluidly connected via a conduit to relay valves, each of which relay valves are connected to a respective dump valve, which dump valves are connected to a respective brake cylinder. The brake distributor will typically have integral relay valve capability. There will generally be one relay and one dump valve per bogie, or one dump valve per axle. It is also known to use variable load valves in place of the relay valves.
[0016] An auxiliary reservoir is provided which stands in fluid communication via a first outlet port with the brake distributor and also in fluid communication via a second outlet port with each of the relay valves. The auxiliary reservoir pressure is protected by a check valve in the distributor. In use, the auxiliary reservoir stores the energy, in the form of compressed air, used to apply the brakes. The auxiliary reservoir is charged using the air supply in the brake pipe.
[0017] Each dump valve comprises a Hold and a Vent valve. The Hold valve is such that it prevents fluid entering the respective brake cylinder and the Vent valve such that it removes fluid in the brake cylinder. The safe state for this system is such that both the Hold and Vent valves are disabled, thereby allowing the normal operation of the brake cylinder controlled by the brake distributor. The valves are operable under the control of a brake ECU so as to provide wheel slide protection functionality (WSP).
[0018] Fig. 1 shows an exemplary self-test sequence comprising four sections; start-up extended start-up, normal operation and close-down. In the start-up section, start-up and initialisation tests are run, typically these are generic self-tests of ECU components not specific to its application as a brake controller, or self-tests that can run without altering the state of the brake system or without providing a significant increase in the start-up time. In the extended start-up section, the only self-tests run are those required to test safety circuits which are indicated as unhealthy in the non-volatile memory and thus inhibiting prime functions. In normal operation, running tests and on-demand tests are run and in the close-down various circuit self-tests are run. Further details of these are now described in greater detail. In this exemplary embodiment, each test is assigned one of four statuses: next test, due, overdue and failed.
[0019] At start-up a set of standard ECU checks is carried out as part of the brake controller initialisation process. These tests should not perform any test procedures that would cause a healthy brake system to be in a state in which it is temporarily unable to perform prime functions at the end of the start-up period.
[0020] The status of the brake system, at the end of this start-up period, is determined from the result of the start-up and initialisation tests and the unit's status at its previous power-down, which can be recovered from the non-volatile memory. The stored status will indicate the status of the components and circuits based on any self or running (including on-demand) tests which have previously been carried out.
[0021] For each test two time intervals are defined, the first being the nominal time between tests and the second, being equal to or greater than the first, being the maximum permissible time between tests. The first such interval being termed here as the 'due' time, the second the 'overdue' time. The maximum permissible time between tests of a safety circuit must be no more than the maximum proof test period for that circuit. Proof tests are periodic tests performed on a safety circuit, where the testing interval is calculated to provide an appropriately low probability of failure on demand of the circuit.
[0022] As the brake system cannot provide its normal functionality with failed or unavailable (proof test overdue) safety critical circuits, self-tests (where possible and safe) specific to these circuits are performed in the extended start-up period.
[0023] At close-down (vehicle stationary with brakes applied) full self-test sequences can be run, with priority given to proof testing safety critical circuits, according to their status, as follows - failed, overdue, due. Following the high priority tests, other self-tests are carried out in a round-robin sequence, where testing resumes after the last test completed prior to the previous power-down. The close-down tests carry on until power is removed or brake release or wagon movement is detected. No self-test will be carried out more than once in the close-down period. The results of these tests are stored in the non-volatile memory.
[0024] Circuits whose proof test is overdue require only one successful proof test to be performed in order to become available again. Circuits that have failed previous tests may require more than one successful proof test (over successive extended start-ups and close-downs) before recovering their healthy and available status.
[0025] In the example shown in Figure 1, following the start-up and initialisation tests, the recovered status of the safety critical circuits indicates -

Circuit B - Unavailable with an Overdue test

Circuit N - Available but Due a test

Circuits A, C & D are healthy, C is next to be tested in the round robin sequence.

[0026] The status of E and B allows the start-up period to be extended for self-tests to be carried out so that a self-test for Circuit E is carried out at this time. By way of example, it can be assumed for illustration purposes that there is no suitable or safe self-test for Circuit B in this start-up state (e.g. wagon moving with brakes released). Circuit B therefore remains untested.
[0027] The system moves to the normal operation state, although the operational functionality will be limited (degraded or unhealthy) because of the unavailability of Circuit B (and Circuit E if it is not yet proven healthy).
[0028] At close-down, the self-test prioritisation runs the tests as follows (assuming Circuit E is still failed).

Circuit A - marked as next for following close-down

[0029] The house-keeping function updates the time since proof test for any untested circuit, which may result in their status being set and stored as Due or Overdue. The time since test record is reset once a suitable test (proof test) has been performed on a safety critical circuit.
[0030] In this example embodiment, self-test sequences are initiated each time the wagon is determined to have been stationary with brakes applied for a period of greater than 10seconds. The actual time between proof tests is calculated using a total operation time recorded in units of 0.1 of an hour and stored in a non-volatile memory associated with each brake control unit. As freight systems are unpowered at rest, this may not include the time where the wagon is stationary once the brake control unit microcontroller shuts down.
[0031] In the event of a proof test failure of safety critical hardware, the brake control unit reports and stores a fatal fault condition. In this exemplary embodiment the unit reports to a human interface device which displays the health status. There are alternatives known for this reporting including immediate display to the driver.
[0032] Where possible, safety-related hardware which is unavailable either due to a fault detected (by a self-test or on-demand use), or which has not been tested within the maximum period, should be tested during an extended start-up. Where appropriate, a failed safety circuit is operated in fail-safe mode until a successful test
[0033] In this exemplary embodiment the safety related circuits in the brake system are used to disable operation of the respective Hold and Vent valves if they have been operated for a time exceeding that defined in the standard. These safety circuits can be based on a One out of Two (1oo2) architecture which may be represented as shown in Figure 2.
[0034] Tests of the Hold and Vent Inhibit and Interlock circuits may be carried out during start-up. Ensuring correct function of the Hold or Vent Timer circuits can only be undertaken by self-testing and this testing of these circuits inhibits WSP operation for some time (in this embodiment a time equal to the maximum Hold or Vent period, respectively). Therefore these tests are routinely run during close-down, unless overdue or required because the circuits are unhealthy in which case they may be run during the extended start-up phase. Where the system is healthy, or otherwise able to provide WSP functionality, none of these self-tests carried out during the start-up phase will delay the brake controller's ability to provide WSP functionality should brake and wheel-slide occur.
[0035] No self-tests of the pneumatic control valves or related safety-related circuits are performed that deliberately cause the valves to operate and release brake cylinder pressure. Any requirements to verify valve operation which are required to measure or detect changes in the brake control pressure will be performed as running tests, whilst the valves are active during the normal operation of the system. 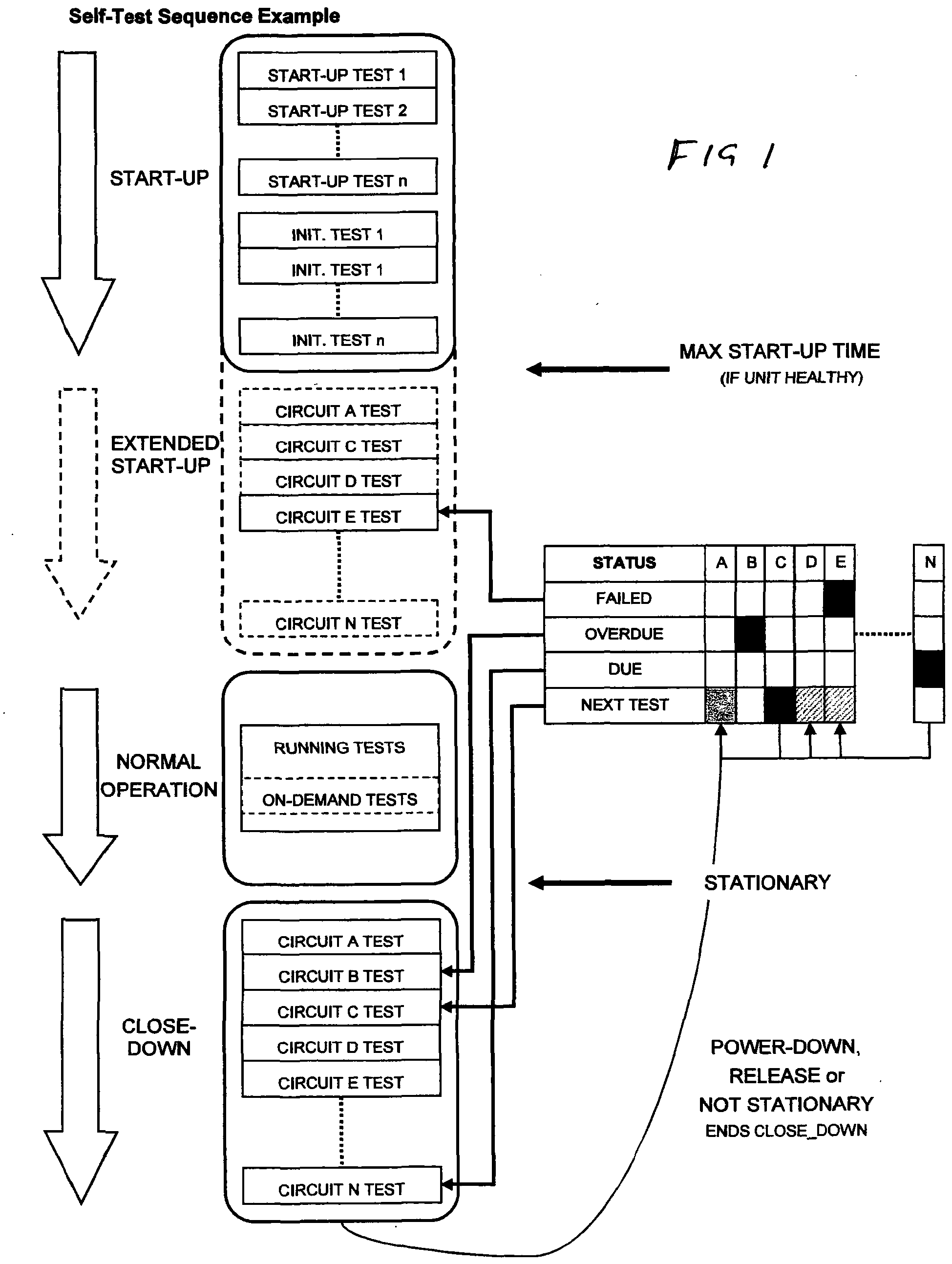 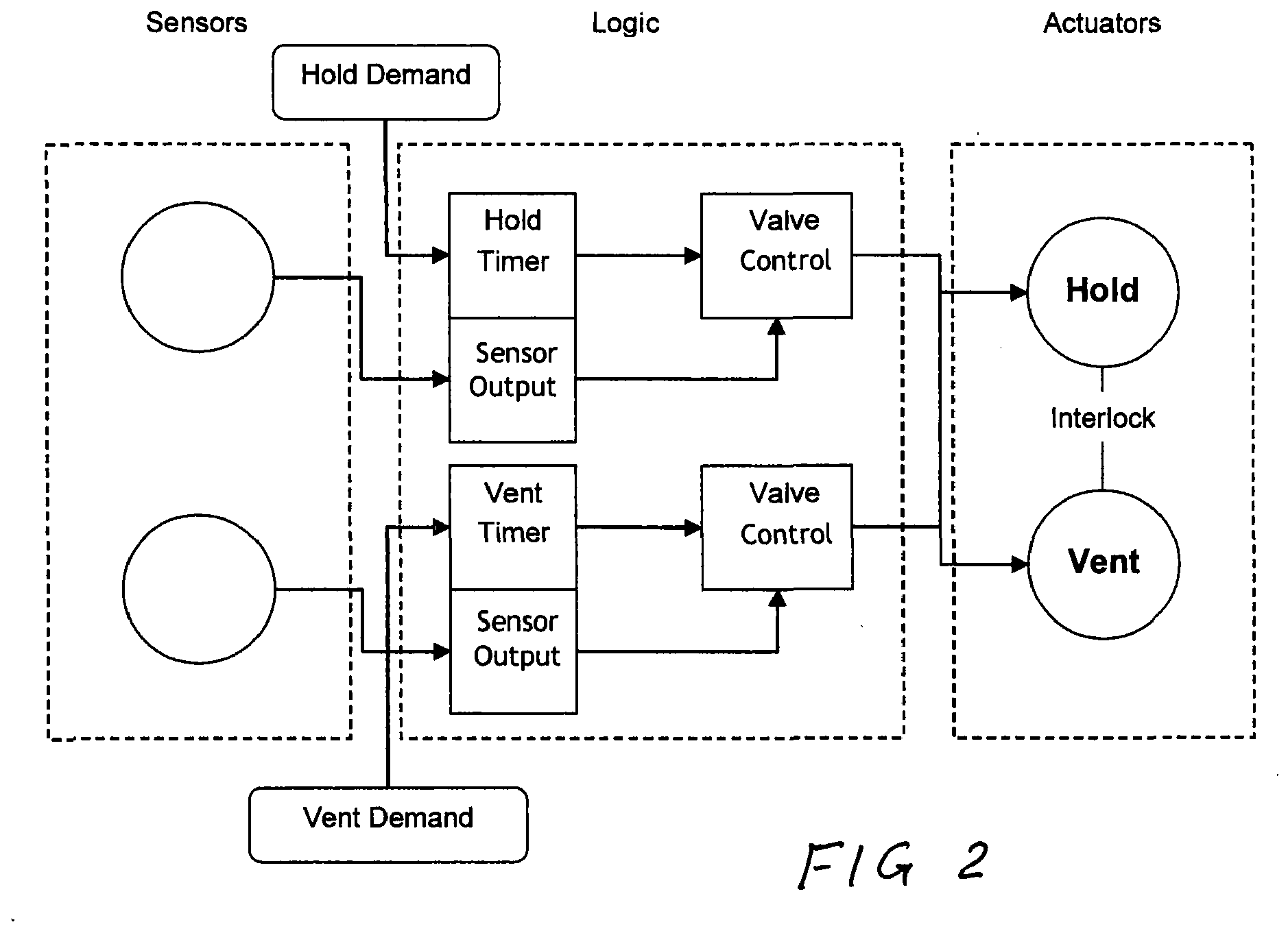