[0002] The diesel engine that is one kind of the compression-ignition engines ignites by injecting liquid fuel into air becoming in high temperature at the compression process. The diesel engine is excellent in efficiency and applied to various fuels such as petroleum fuel, for example, diesel oil and fuel oil, or liquid fuel such as squalene and ester. Further, the diesel engine has an advantage that it can be applied to various kind of engines widely from small sized engine in high speed through gigantic sized ship engine in low speed.
[0003] However, in the case of the diesel engine, there are defects such as occurrence of NOx exhaust gas or soot. On the other hand, CNG draws public strong attention as the fuel for being able to reduce the diesel exhaust gas. However, CNG has the ignition temperature in high compared to the diesel oil. Therefore, since it is impossible to operate the conventional diesel engine by CNG fuel, it has been suggested that the diesel oil as an example is adopted as the pilot fuel, or the ignition means such as the ignition plug is adopted (Non-Patent Document 1).

Patent Document: US Patent Publication No. 7963262

PROBLEMS TO BE SOLVED

[0008] According to the present invention, an ignition performance not only at a center part of the combustion chamber but also at an outer edge part can be improved in a compression-ignition engine that burns a gaseous fuel.

BRIEF EXPLANATION OF THE DRAWINGS

Fig. 1 illustrates a structure of a diesel engine 10.

Fig. 2 illustrates a bottom view of a cylinder head of the diesel engine 10.

Fig. 3 illustrates a front view of a partial cross section that shows a structure of an igniter 3.

Fig. 4 is an equivalent circuit of the igniter 3.

Fig. 5 is a time chart that explains a control performed by a controller 41.

Fig. 6 is a view that illustrates a structure of a diesel engine 100.

Fig. 7 is a view that illustrates a structure of an injector unit 6.

Fig. 8 is a bottom view of a cylinder head of the diesel engine 100.

Fig. 9 is a time chart that explains the control performed by the controller 41.

DESCRIPTION OF THE PREFERRED EMBODIEMENTS

[0030] Fig. 6 illustrates a diesel engine 100 structure regarding the second embodiment. A front cross sectional view of a partial cross section regarding the engine main body part is illustrated. Into the cylinder head 21 of the diesel engine 100, an injector unit 6 that includes an injector configured to inject CNG fuel to the combustion chamber 28 and an igniter configured to ignite the fuel is inserted.
[0031] Fig. 7 is a front view of a partial cross section that illustrates a structure of the injector unit 6. The injector unit 6 includes injectors 61, the igniter 3, and a casing 64 housing them inside.
[0032] The igniter 3 is arranged on a center axis of the casing 64, and two injectors 61 are arranged adjacent to the igniter 3.
[0033] The injectors 61 are built together with the igniter 3, and therefore, a downsized type one is selected. By the downsize, a fuel injected amount is reduced. Therefore, so as to compensate the reduced amount, the injector unit 6 uses a plurality of (two) injectors.
[0034] Again, turning back to Fig. 6, in the diesel engine 10, in addition to the igniter 3 housed inside the injector unit 6, further more igniters are inserted into insert holes of the cylinder head 21. As illustrated in a bottom view of the cylinder head 21 of Figure 8, in addition to the igniter 3 (injector unit 6) in the center part, an igniter 3A at the point A between the intake ports 24, an igniter 3B at the point B between the exhaust ports 26, igniter 3C, 3D at the points C and D between the intake port 24 and the exhaust port 26, i.e., a total of five igniters are arranged.
[0035] Fig. 9 illustrates a control example performed by the controller 41. The controller 41 controls such that firstly the igniter 3 performs the discharge, and the center part of the combustion chamber 28 where is a part provided with the injector 1 is earlier ignited. Next, other igniters perform discharge sequentially in the order of igniter 3A, the igniter 3B, the igniter 3C, and the igniter 3D, and ignited at the point A, B, C, and D sequentially in this order.
[0036] Multi-points ignition can be achieved also in the present embodiment, the flame propagation distance can be reduced, the initial combustion period of time and the main combustion period of time can be shortened, and the stabilization can be achieved.

[0037] In the above embodiments, each igniter takes turn for ignition according to the control of the controller 41. On the other hand, reflection wave from the igniter 3 may be utilized to ignite sequentially among the respective injectors. If the discharge is performed at the discharge electrode 36 of the igniter 3, at that moment, the impedance matching inside the igniter 3 falls out of phase, i.e., deformed, and the reflection wave is generated. In other words, the microwave flows in a reversed direction from the tip part, i.e., the amplification/discharge part 3c, to the rear part, i.e., the input part 3a. By the characteristic, the reflection wave is successively introduced to the igniter 3, and the reflection wave can efficiently be utilized. In other words, the igniters 3A, 3B, 3C, and 3D are electrically connected in series, the igniter 3B uses the reflection microwave from the igniter 3A as the power source, and the igniter 3C uses the reflection microwave from the igniter 3B as the power source, and thereby, the timing control by the controller 4 becomes unnecessary. Moreover, if the control of the igniter 3 is tried to be performed by using a single power source, switching in first speed is difficult; however, by using the above-mentioned characteristic, the igniter for ignition can be switched in first speed. Note that, the present embodiments can be applied to not only compression-ignition engine but also the spark ignition engine such as gasoline engine.
[0038] As above, the present embodiments are described. The scope of the present invention is determined based on inventions described in the claims. The scope of the present invention should not be limited to the present embodiments.
[0039] For example, the igniter 3 is not limited to the above, and other type plug such as a corona discharge plug, for example, "EcoFlash"®, registered trademark in US owned by BorgWarner Inc. may be utilized. Note that, continuous-discharge-possible-igniter in high frequency is preferably to used in order to obtain an effect illustrated in the above embodiments.
[0040] Moreover, the igniter 3 is operated by the microwave; however, the electromagnetic wave that has other band may be used.

a controller configured to control the electromagnetic wave generator; and

wherein the internal combustion engine is configured such that the first and second plasma generators perform an ignition of fuel at a plurality of locations in the combustion chamber. 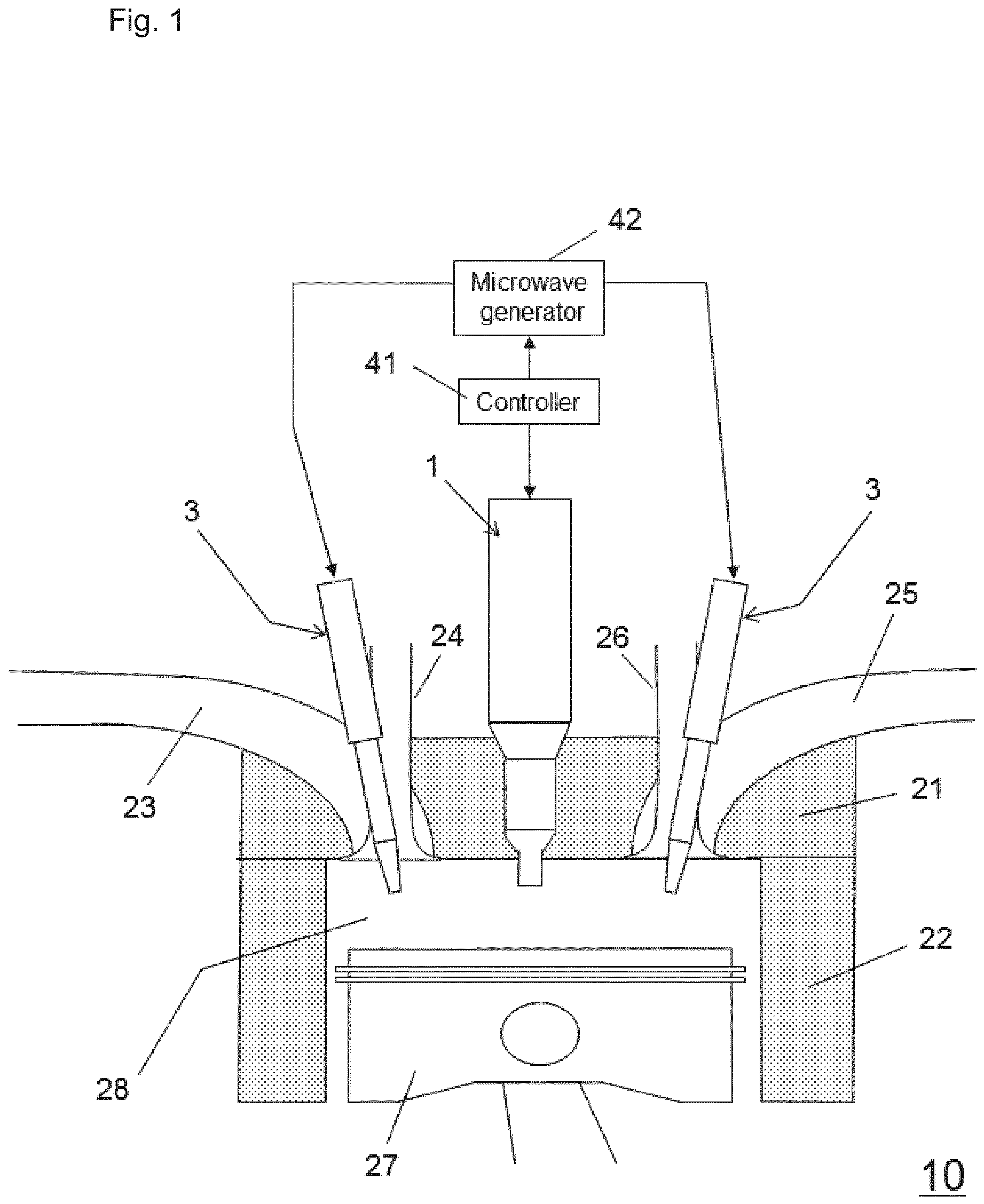 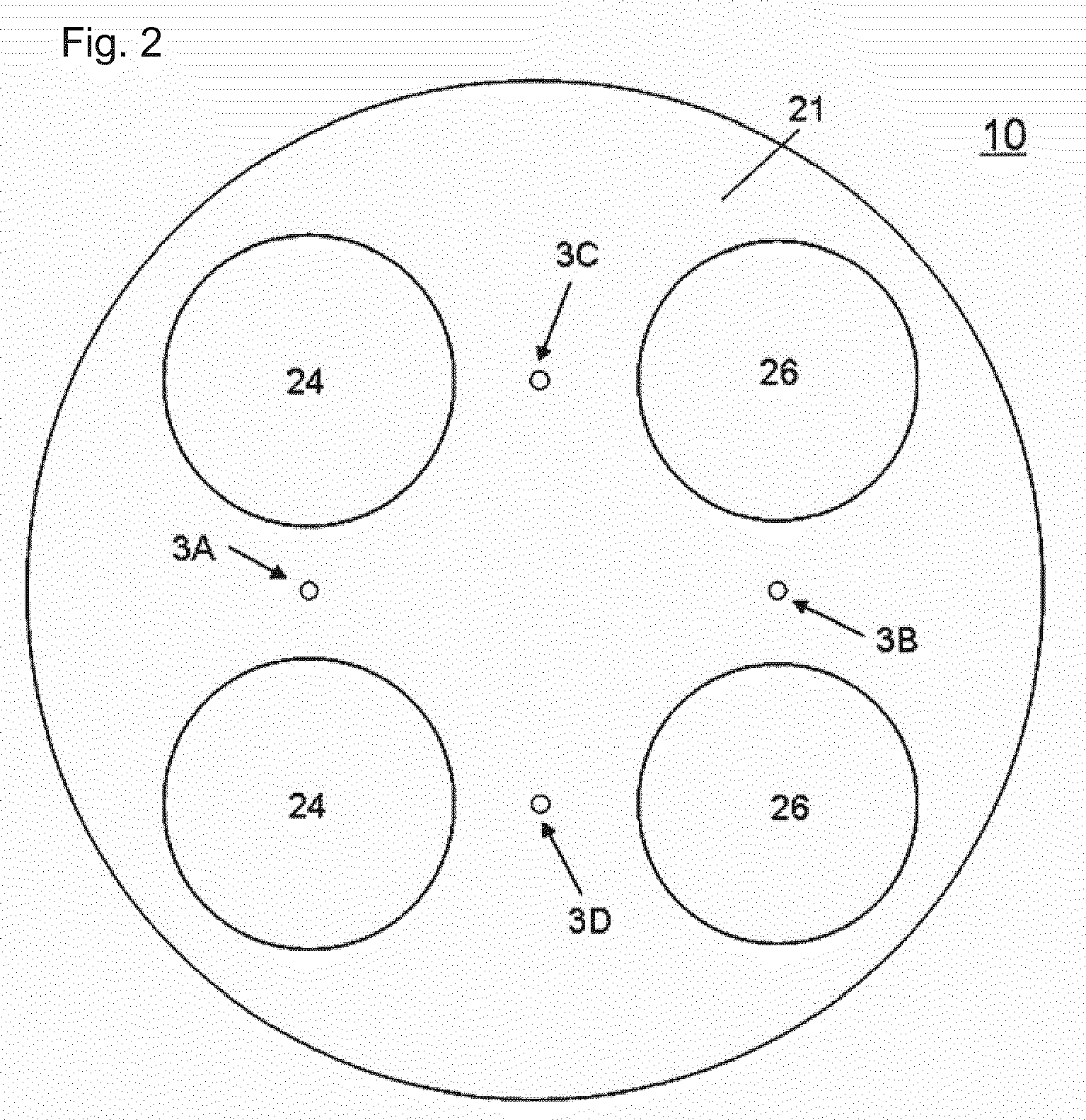 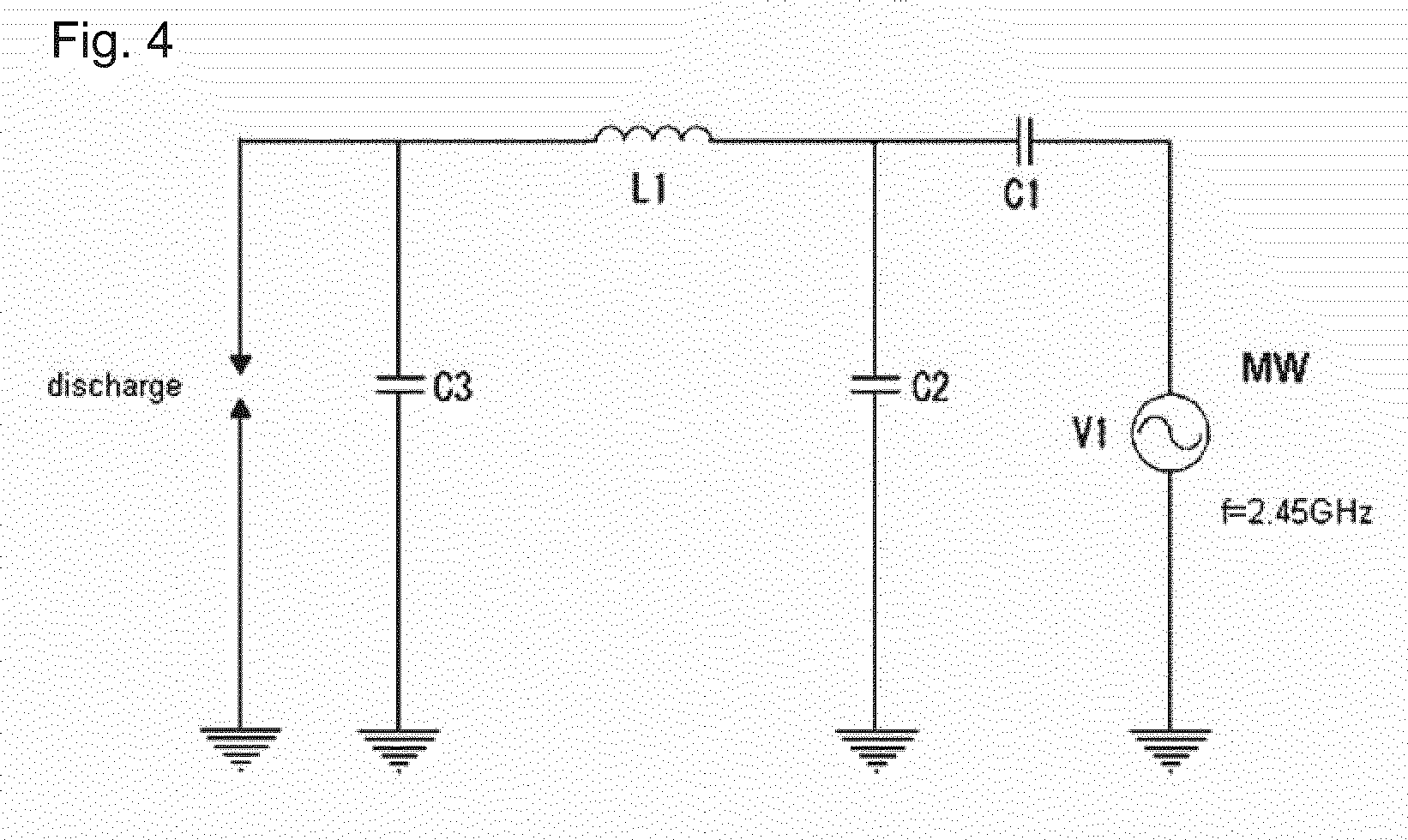 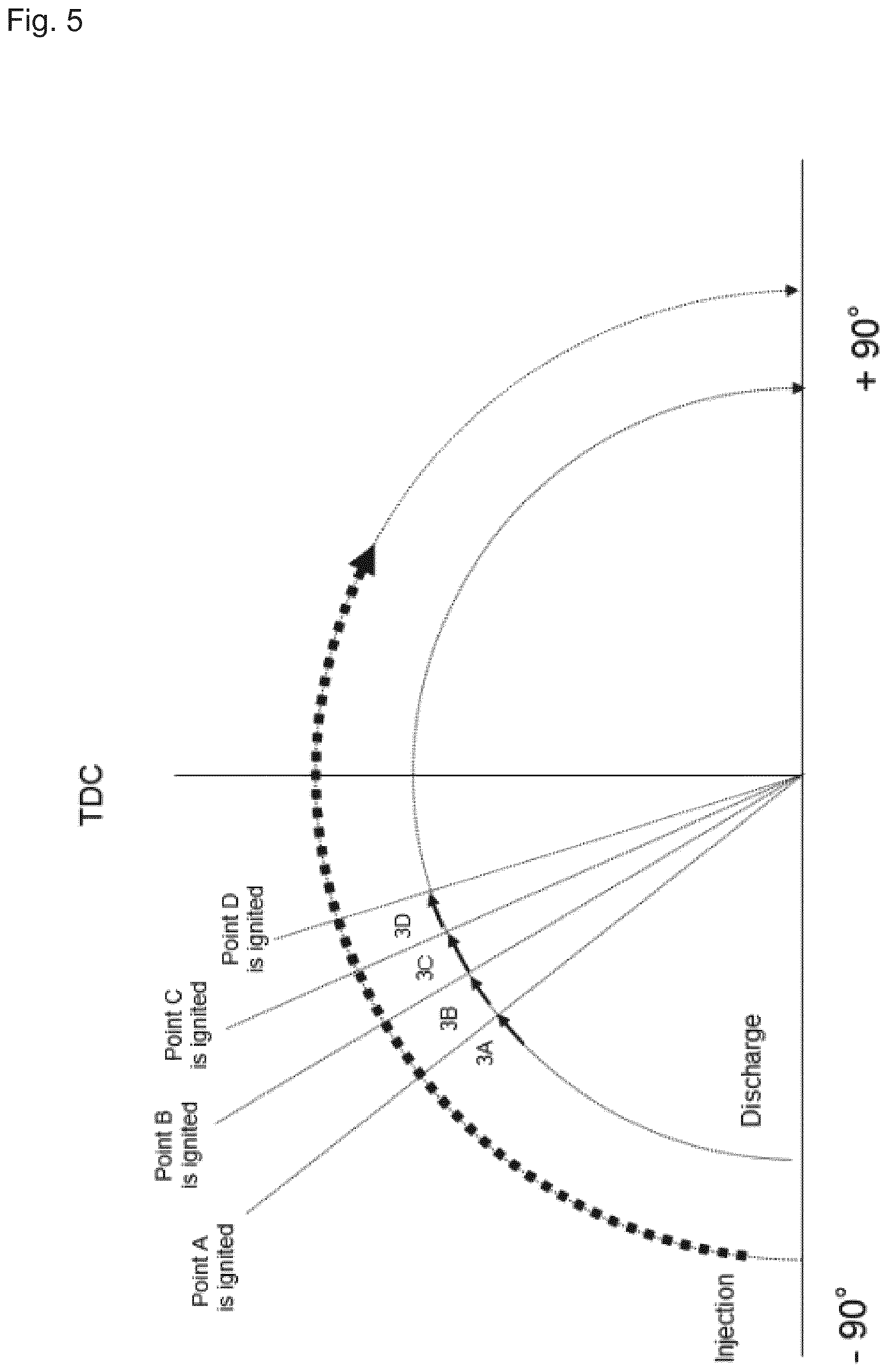 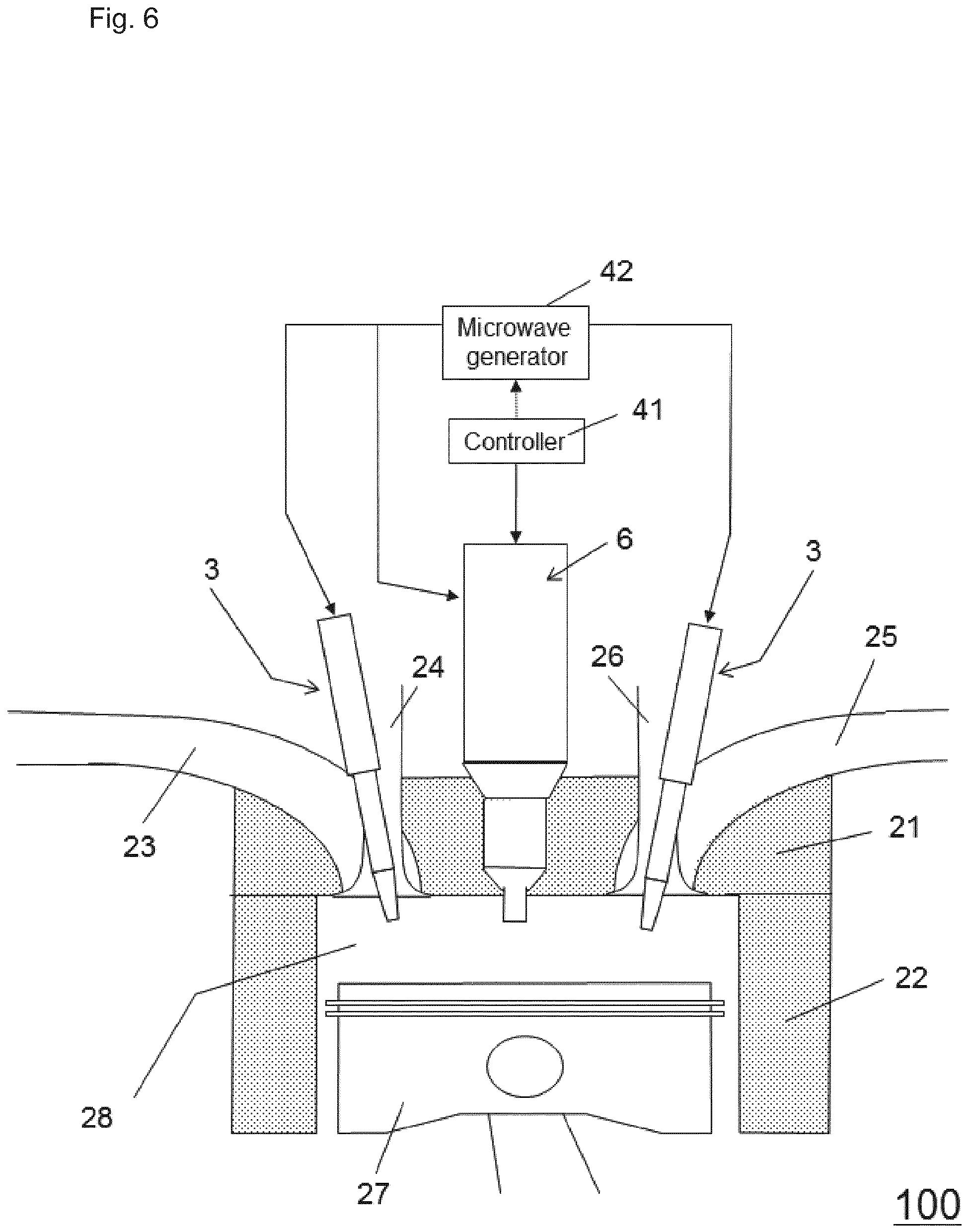 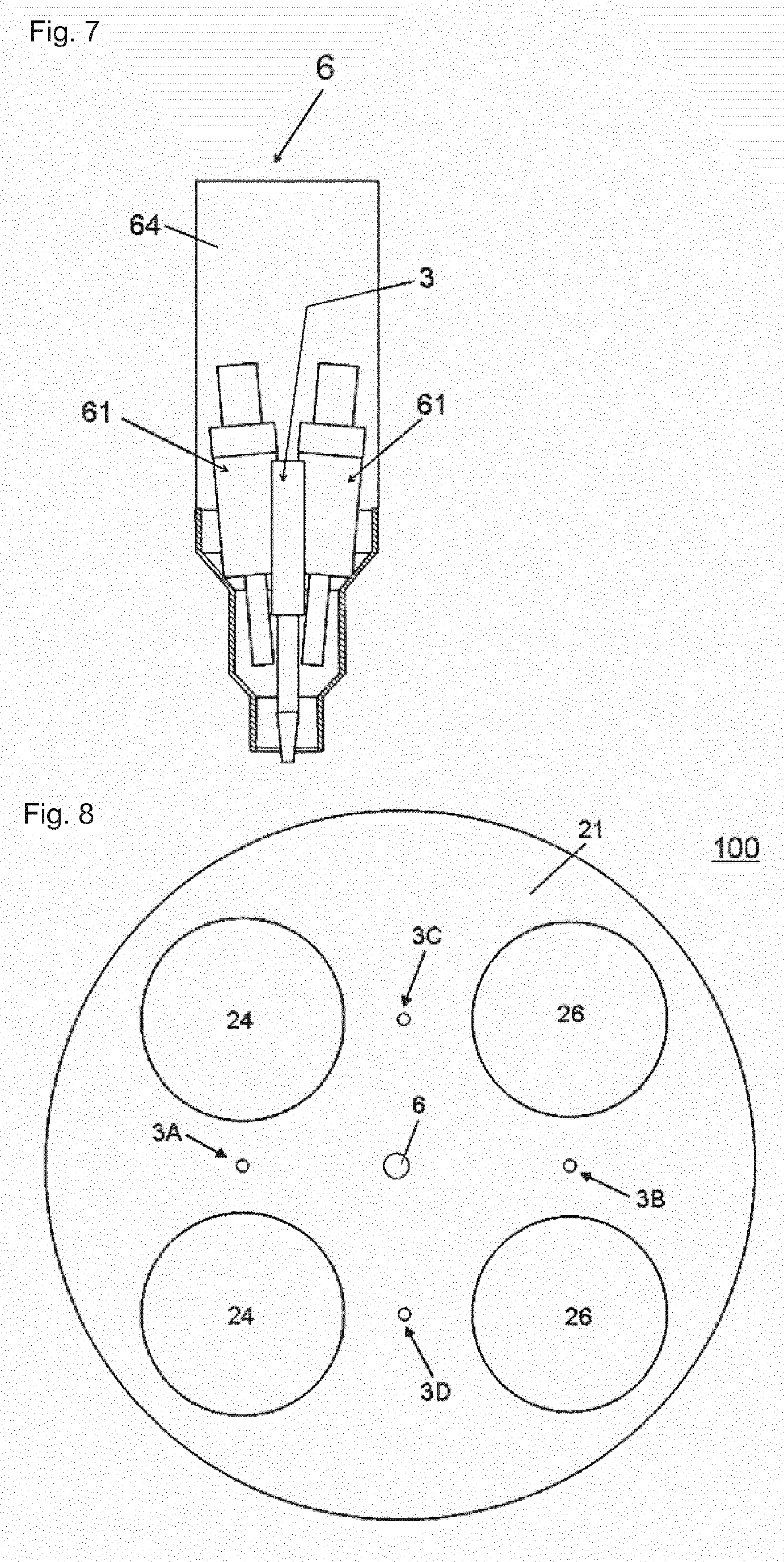 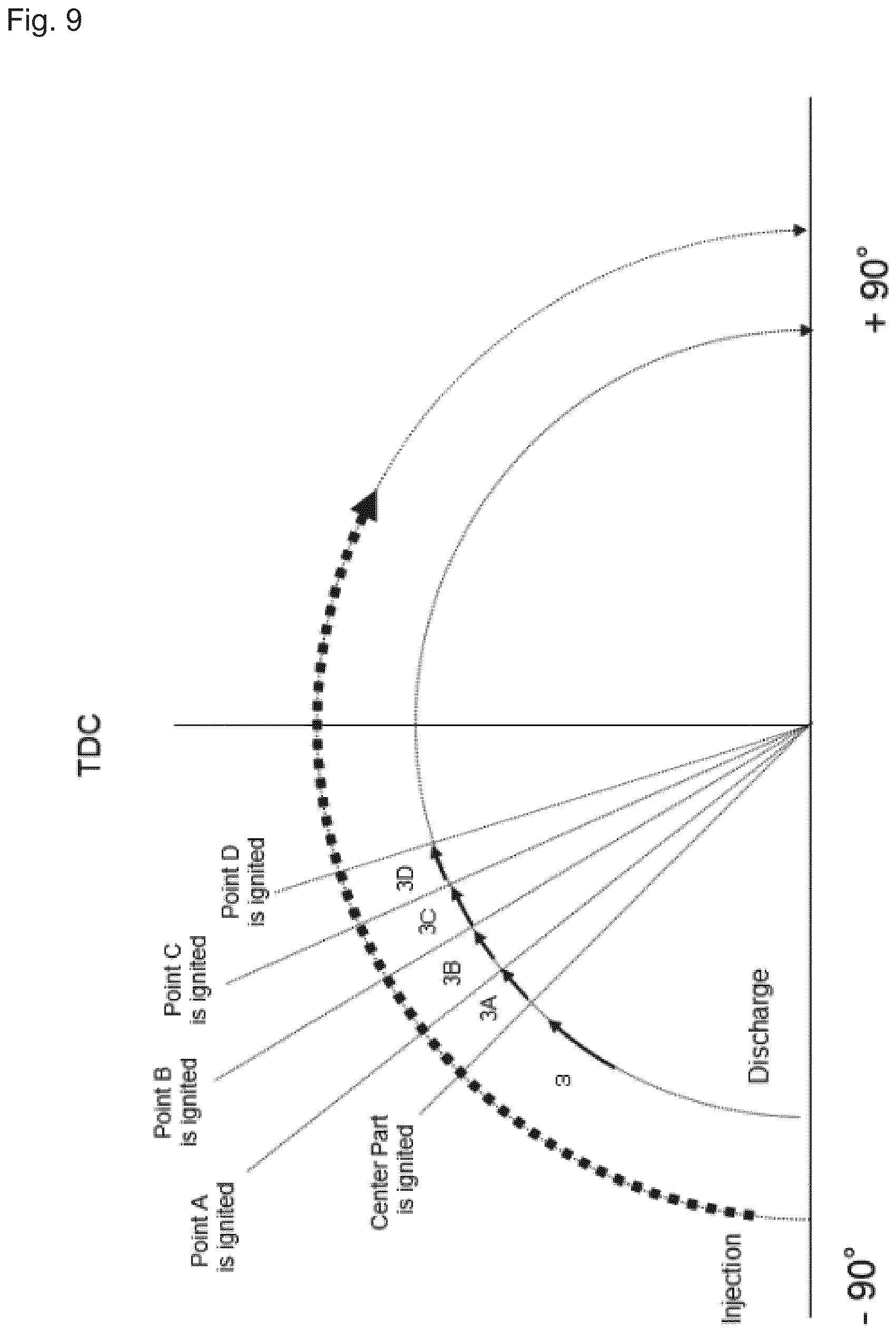 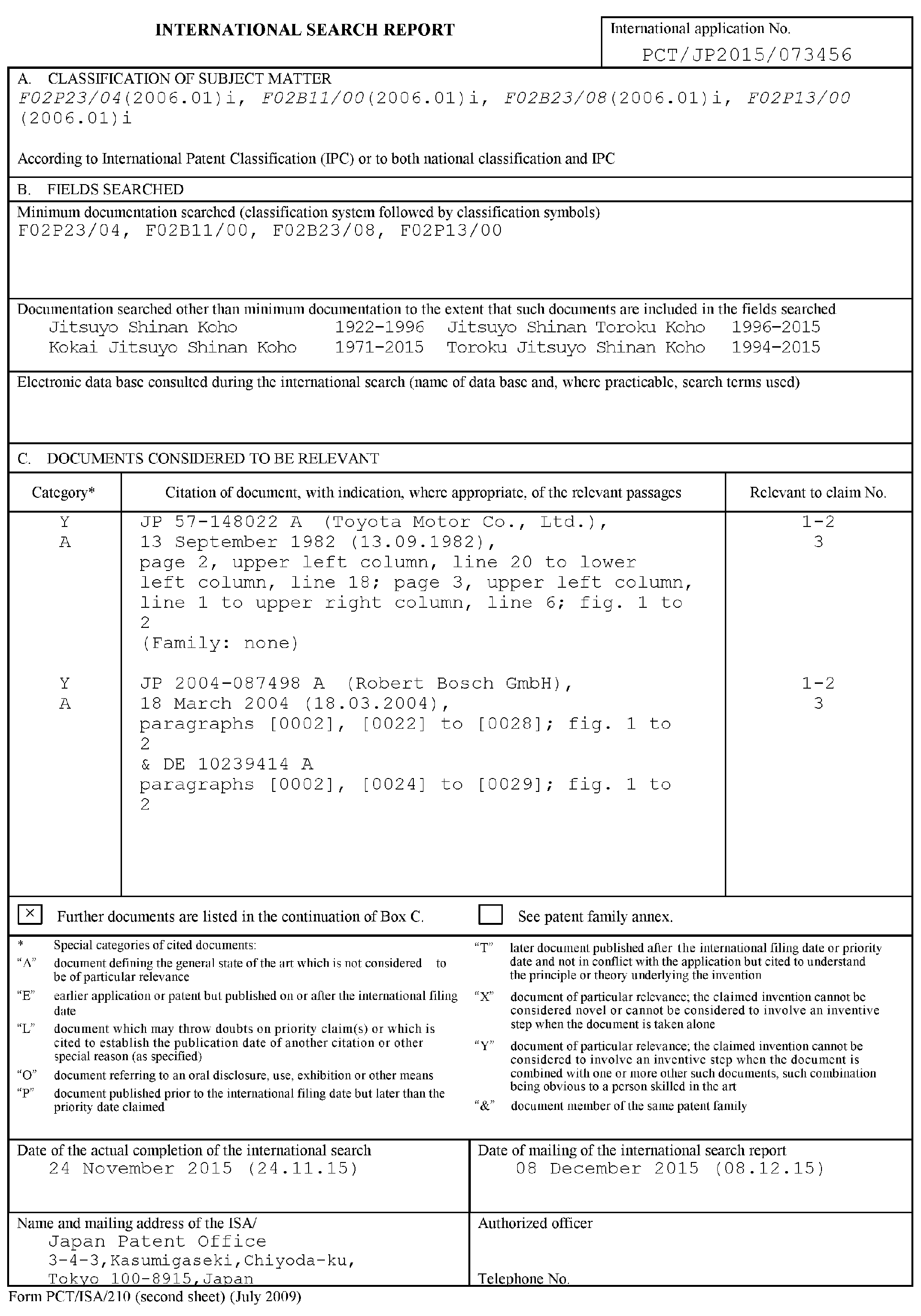 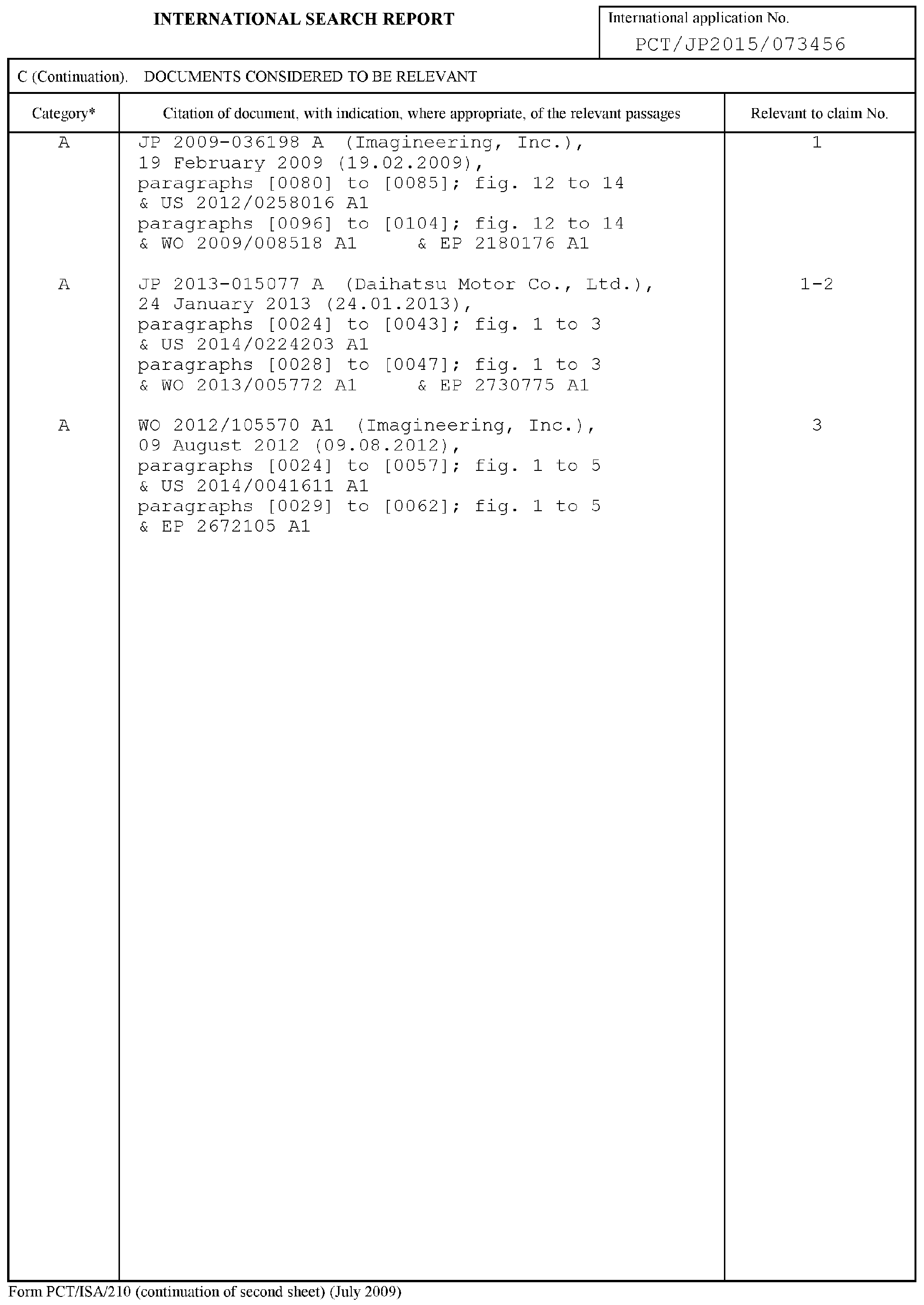