[0002] Absorbent articles comprise numerous components, typically layers of materials that are bonded together. The article components may be bonded through various means, but much of the bonding is done via adhesives. One difficulty of working with adhesives is the challenge of balancing the right application level of adhesive to achieve adequate bond strength with cost and with prevention of processing issues such as adhesive burn-through with thin films.
[0003] In simple terms, the more adhesive used, the stronger the adhesive bond. Though there may be many variables, the strength of a particular adhesive bond between two materials may be roughly proportional to the amount, or thickness of the adhesive used. To reduce the amount of the adhesive used may reduce the cost and reduce processing problems, but there is increased risk that the bond will not be adequately strong. Thus there is a continuing need for new adhesive applications and for tailoring adhesive use to particular materials.

Figure 1 shows a top plan view of the garment facing surface of a sanitary napkin according to the present invention.

Figure 2 is a transverse section of the sanitary napkin of Figure 1.

[0032] Table 1 shows data for four samples, a reference sample 1 and examples 1-3 wherein topsheet and backsheet laminates are bonded with a plurality of adhesive stripes. The laminates in all four samples was the same, that is, the materials bonded were a backsheet film bonded to an apertured topsheet film, for use, for example, as a wing laminate. The adhesive for all four samples was the same. The area of all four samples was the same, at 190 x 48, or 9,120 mm2.
[0033] For the reference sample, the adhesive was applied as a continuous layer covering the entire area of the sample, at 13 gsm local basis weight. This resulted in 0.119 g of adhesive. The resulting bond strength, using the Standard Test Method for Peel Resistance of Adhesives, with modifications (as described below), resulted in an adhesive bond strength of 1.0 N/15mm.
[0034] For examples 1-3, 50% of the area was coated with adhesive stripes, using a 1-on-1-off slot adhesive pattern. The adhesive stripes had a lateral width of 1 mm and were spaced 1 mm apart. The adhesive in examples 1-3 was applied at a local basis weight of 13 gsm, 16 gsm, and 18 gsm, respectively. Each example thus used less adhesive than the reference sample. The table shows the resulting adhesive bond strengths, with example 3 being close to the same bond strength as the reference, though less adhesive was used.
Table 1: Topsheet to backsheet wing laminate

[0036] Table 3 shows data for four samples, a reference sample 3 and examples 7-9 wherein the backsheet film is bonded to the absorbent core via a plurality of adhesive stripes. The laminates in all four samples was the same.
Table 3: Core to backsheet laminate

[0037] Standard Test Method for Peel Resistance of Adhesives (T-Peel Test) ASTM D-1876 with the following modification:
Cut the bonded panels into 25 mm wide test specimens. Other specimen widths may be used, provided the test machine grips are of ample width to apply the load uniformly across the width of the adherends. The 76-mm long unbonded ends bent apart, parallel to the glue line, for clamping in the grips of the testing machine. Clamp the bent, unbonded ends of the test specimen in the test grips of the tension testing machine. Apply the load at a constant head speed of 500 mm/min. Determine the peel resistance over the length of the bonded panel. Other unbonded ends length may be used, provided the ends do not slip inside the grips. The unbonded ends can be shorter to fit within the size of the article.
[0038] The dimensions and values disclosed herein are not to be understood as being strictly limited to the exact numerical values recited. Instead, unless otherwise specified, each such dimension is intended to mean both the recited value and a functionally equivalent range surrounding that value. For example, a dimension disclosed as "40 mm" is intended to mean "about 40 mm." 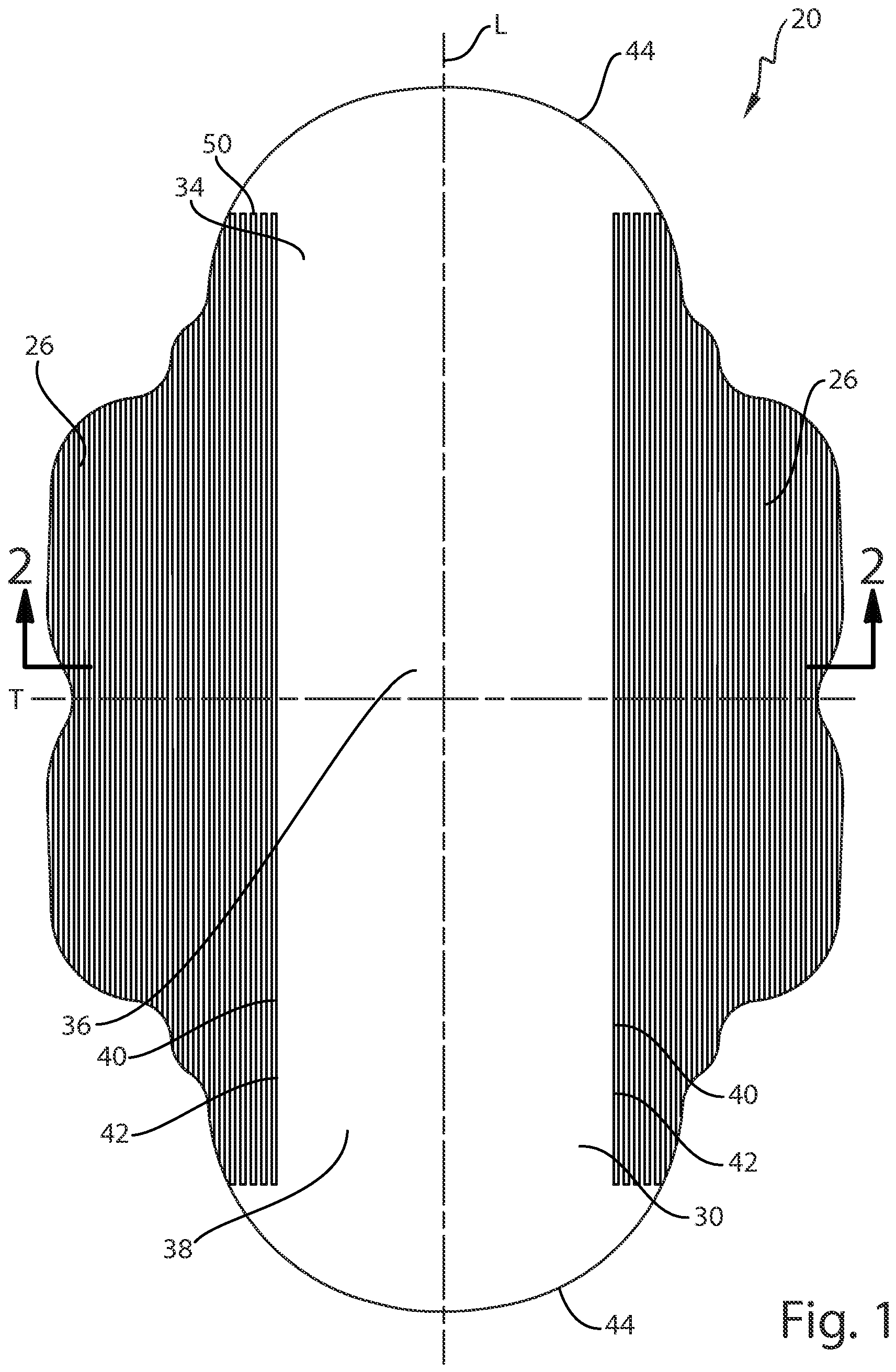