[0001] Generally the present invention pertains to electronic devices. In particular, however not exclusively, the invention relates to facilitating navigation utilizing remote sensing technology.

[0002] During the past two decades, various navigation devices e.g. in the form of portable personal gadgets, such as hand-held navigators or navigation-featured mobile terminals, have been introduced to the general public. These have hugely gained in popularity due to the various advances in the field of electronics, telecommunications, positioning technology, batteries, and generally sensing, whereupon the utility of such devices has taken the necessary leap considering the requirements for entering the so-called mass market. The size, weight, user friendliness, reliability and after all, price, have finally reached the associated critical requirements.
[0003] In addition to different mainstream applications, modern navigation solutions have turned out particularly valuable in a number of specialized contexts as well. For instance, visually impaired, i.e. blind or short-sighted, persons obviously have a rather limited ability to self-navigate. Self-navigation is, however, a somewhat critical capability while performing e.g. ordinary tasks of everyday life autonomously like visiting a nearby grocery store, not forgetting a myriad of more challenging tasks. Accordingly, restoration or cultivation of self-navigation capability would be, in many ways, a critical aspect in improving the quality of life of the impaired.
[0004] Active sensing devices commonly called as radars provide information about the environment; different entities within the scanned area, such as persons, items or various other obstacles blocking the scanning rays, may be detected, located and optionally characterized in terms of their size, velocity, materials, etc. The rapid developments in many fields of technology have accelerated the miniaturization of radars. Portable applications include, for example, navigational aids for blind people or fire fighters, for instance. In addition to portable personal devices small-sized radars will undoubtedly find further applications e.g. in moving vehicles such as cars, robots and unmanned aerial vehicles.
[0005] Portable electronic navigational devices are disclosed in documents US6489605 B1, US2007/0268178 A1 and US2009/0322616 A1.
[0006] In the aforesaid applications the radar device, such as a smartphone-based ultrasonic sensing arrangement, will move with a person or machine it is attached to or, perhaps, integrated with. Therefore, the radar beam(s) can, from time to time, point to unwanted direction giving false alarms and potentially omitting appropriate alarms caused by obstacles on the actual route. For example, a radar device carried by a moving person with a chest strap or belt may tilt and point to either to the ground or to the sky, instead of pointing forward. The preferred scanning direction would be substantially horizontal regarding the fact that most critical obstacles to be detected are likely located substantially in the front of the person. Furthermore, sensing devices e.g. ultrasonic personal radar solutions tend to have rather modest range (a meter or two, for example) and the associated ultrasonic waves do not penetrate well through any denser materials.

BRIEF DESCRIPTION OF THE RELATED DRAWINGS

Fig. 1 is a sketch illustrating the overall concept of the present invention via one use scenario thereof.

Fig. 2 is a high-level block diagram depicting the internals of an embodiment of the navigational aid in accordance with the present invention.

Fig. 3 is a high-level block diagram depicting the internals of an embodiment of the accessory in accordance with the present invention.

Fig. 4 illustrates a scenario in which adaptive beamforming of the present invention is not activated in connection with a portable radar device.

Fig. 5 discloses an embodiment of beamforming adaptation in accordance with the present invention.

Fig. 7 is a flow diagram disclosing an embodiment of a method in accordance with the present invention.

- a radio frequency, preferably millimeter wave, radar (218) with at least one transmitting, TX, channel and a plurality of receiving, RX, channels,

- at least one orientation sensor (220) configured to obtain data indicative of the orientation of the radar, and

- a processing element (210) configured to adaptively control (500, 602) the beamforming of the radar based on the data provided by the orientation sensor.

- obtaining a portable electronic navigational device, said device comprising a radio frequency, preferably millimeter wave, radar with at least one transmitting channel and a plurality of receiving channels, at least one orientation sensor, and a processing unit (702),

- determining, by the processing unit, the orientation of the radar utilizing said at least one orientation sensor (704, 706), and

- adapting the beamforming of the radio frequency radar based on the orientation (708).

16. The method of claim 15, wherein in case a tilt of the radar is detected relative to a reference plane or reference direction based on the sensor data, beamforming is adapted so as to compensate the tilt. 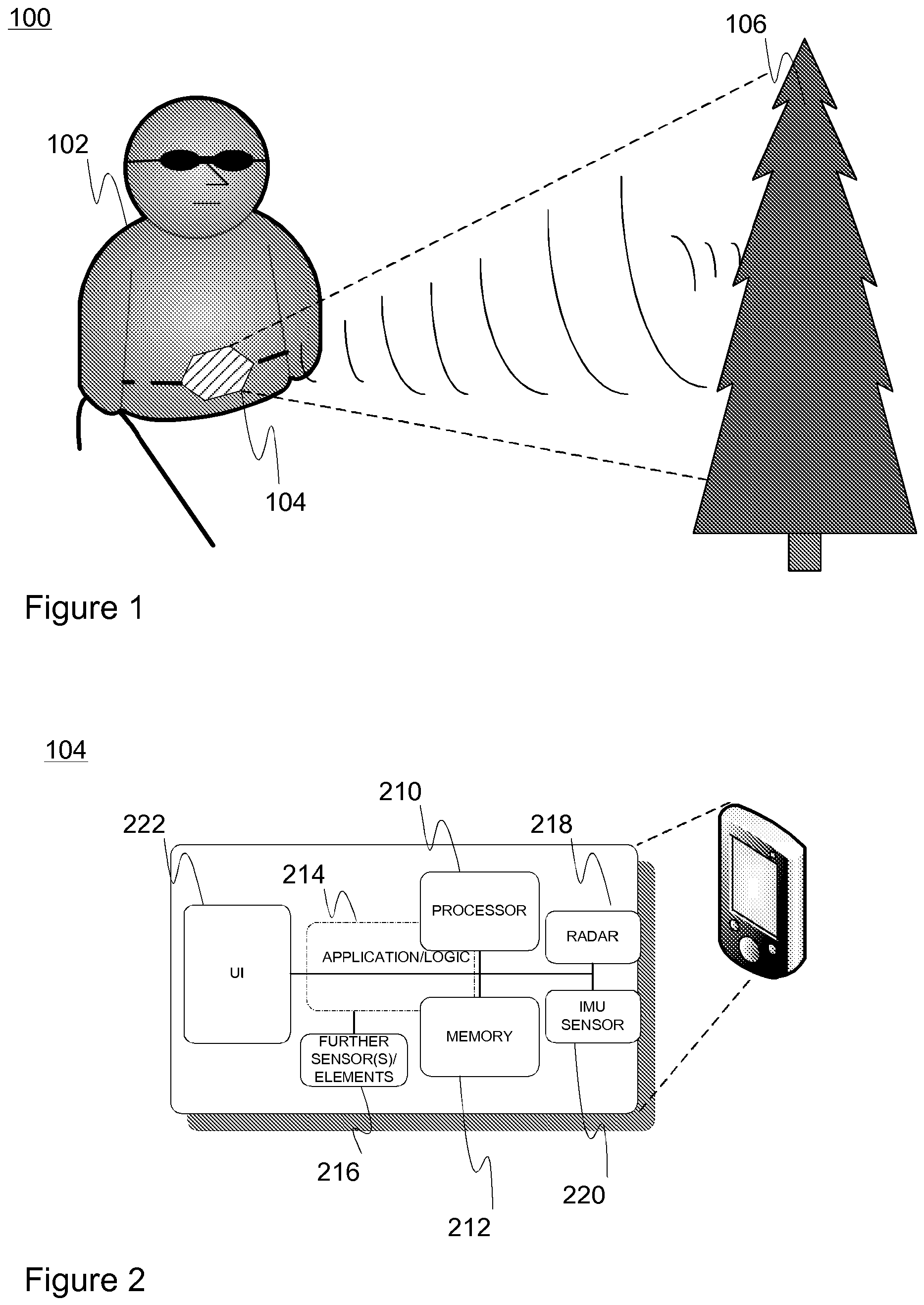 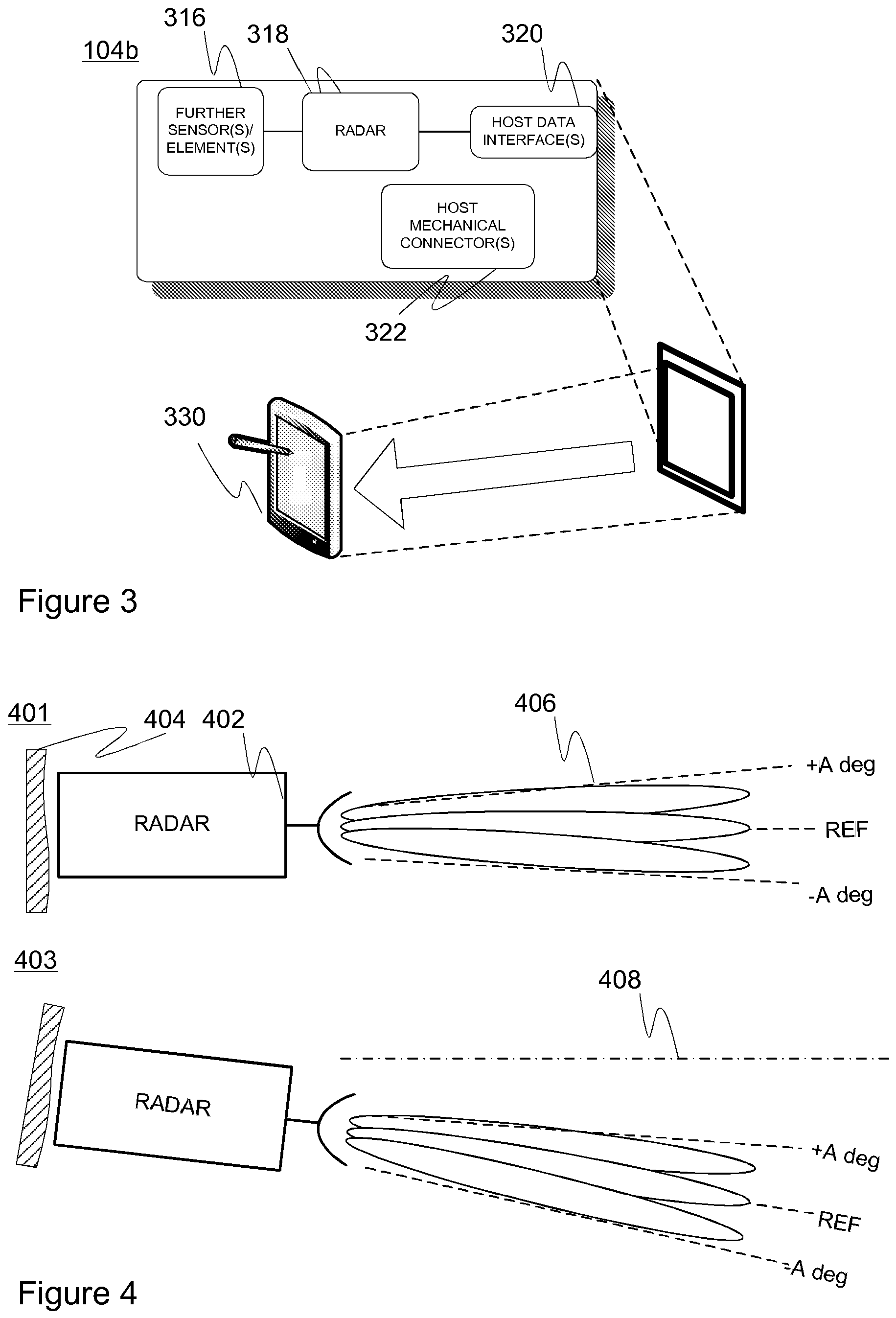 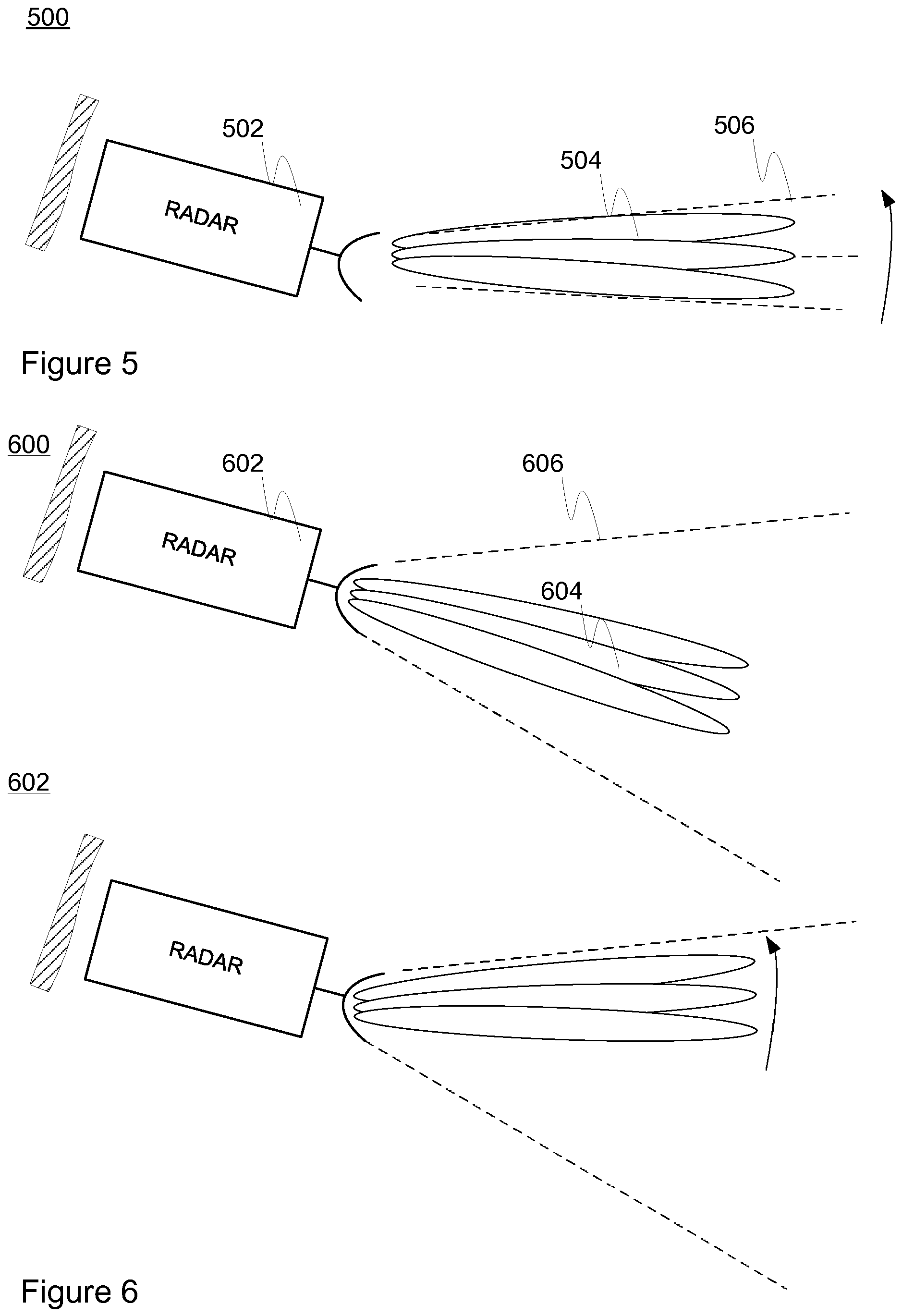