[0001] The present invention provides Analog-to-Digital Converter comprising an optical source providing radiation of one single wavelength, an electro-optic modulator sampling an analogue signal provided at an electrical input, a demultiplexer which de-multiplex the optically sampled signal, at least one photodetector converting the sampled signal into an electrical signal, transimpedance amplifiers amplifying the signals and at least one analogue-to-digital converter converting the analogue signal into a digital signal.
[0002] The present invention also provides a method of converting an analogue signal to a digital signal.

[0003] Analog to digital converters (ADC) are key components to convert real world continuously varying analog signals to digital data for use by digital systems that process, store, interpret, and manipulate digital data. Analogue signals will be detected, transmitted and received for example by sensors or in telecommunication by antennas. For further signal processing these signals often need to be converted into digital domain in order to be used in computers or microprocessors, etc. Generally, this conversion is necessary whenever mapping from analog signals to digital data is needed. For example, a leading company in this area had annual global revenue of more than 1 Billion Dollars in 2010 for both ADCs and Digital to Analog converters (DAC). Various ADCs already exist in electronic industry having different resolutions, sampling rates, and bandwidths.

Fig. 1 A conceptual schematic of a conventional single channel ADC;

Fig. 2 The sampling representation of a continuous signal;

Fig. 3 A conceptual schematic of a TI-ADC;

Fig. 4 Schematics of the relation between quantization accuracy and jitter;

Fig. 5 The basic idea of optically sampled ADC according to an example using a mode looked laser according to the state of the art;

Fig. 6 An illustration of a pre-distortion stage before the mach zehnder modulator, which can potentially compensate a portion of electro optical modulator nonlinearity;

Fig. 7 An optically sampled ADC according to the invention using just a single line laser whereas all components are integrated on one chip, except the laser source;

[0025] Fig. 7 shows a schematic drawing of a fully integrated photonic ADC according to the invention that can be the solution of the previous problems thereby the all electronic and photonic parts are integrated together in the same platform using electronic photonic integrated circuits. This is necessary to co-optimize both the electrical and optical components at the same time which is the basis in the next generation ADCs in higher than 100 GSps arena.
[0026] In fig. 7 the optical source 1 emits a continuous wave. A short pulse generator 15 is used to generate the short pulse needed for sampling. This short pulse generator consists of a multi wavelength generator 2 and a chromatic dispersion element 3 that are connected in series and provide optical signal components with different wavelengths and specific delays to each other. An electro optical modulator 4 receives the optical signal components at a signal input 41 and receives the analogue electrical modulation signal at a modulation input 42. The electro optical modulator 4 modulates the optical signal with the analogue electrical signal. The output of the modulator 43 varies periodically as a function of the electrical signal applied to the modulation input 41.
[0027] In a TI-ADC with M cores, the final sampling rate of the system is M times higher than that of each ADC. The time interleaving behavior in the current approach is obtained by increasing the number of branches of the optical multiplexer (MUX) and de-multiplexer (De-MUX). For example, if the optical de-multiplexer (DE-MUX) 5 is designed by e.g. 4 output branches 6, then all the components of each branch have to work at a speed of 25 GHz to achieve targeted rate of 100 GSps. If the speed is maintained, then adding one extra branch results in 5 ADCs each operates at 20 GHz speed. While the mach zehnder modulator 4 needs a bandwidth as large as the input signal 12, other components in each branch, do not need a bandwidth higher than the sampling rate. This is one main concept of TI-ADCs and a reason for popularity of this architecture. Another point to mention is that Nyquist criterion shows the minimum required sampling rate to reconstruct the signal. When a signal is sampled at higher rate than this frequency, the aliasing takes place at higher frequencies and it is easier to filter them out. Therefore, there are benefits even if it may not be possible to have a bandwidth as high as the Nyquist rate.
[0028] The schematic drawing in figure 7 also presents a possible scenario of 100 GSps ADC. In this method in contrast to previous methods, which use mode locked laser or multiple laser sources as shown in figure 5, just a single continuous wave laser is being used as the source 1. By using a multi wavelength generator 2, preferably a ring resonator which is designed for this purpose, several wavelengths will be generated and by using a chromatic dispersion element 3, various wavelengths will shift in time and different delays will be introduced to different wavelengths. After sampling by using an electro optical modulator 4, a de-multiplexer 5 will map different wavelengths to different waveguides 6, and eventually multiple photodetectors 7 will be used to convert the optical signals to electrical signals. After detection of optically-sampled signal, a transimpedance amplifier (TIA) 8 will amplify the signal and finally it will provide the input for comparators at the input of the electrical ADC 9.
[0029] The major advantages of the presented invention can be summarized as follows:
Firstly, a single wavelength laser is utilized instead of having multiple wavelength sources like mode locked lasers. This is less expensive and reduces costs.
[0030] Secondly, with the monolithic realization of optically sampled ADC, lower parasitics exist in sampling and receiver circuit and therefore less jitter can be achieved.
[0031] Thirdly, with the optimized analogue to digital conversion system less space is required on the chip since just one multiplexer or de-multiplexer is required for the realization.
[0032] Fourthly, the monolithic realization of optically sampled analog to digital converter has the ability to be fabricated in large scales much easier than its discrete optoelectronic counterparts which have been produced before.
[0033] Fifthly, nonlinearities of optoelectronic devices (like optical modulators and photodiodes) can be compensated using electronic devices, like drivers and transimpedance amplifiers that can be easily integrated on the chip and can be adapted to the particular application or the other components that are used.
[0034] Sixthly, in comparison to electronic ADCs, higher sampling rates can be achieved using optical signal for sampling the electronic signals.

- an optical source (1) providing radiation of one single wavelength;

- an electro-optic modulator (4) sampling an analogue signal provided at an electrical input;

- electrical analogue-to-digital converters (9) converting the amplified signals into digital signals; whereby except to the optical source (1) all electrical and photonic components are integrated on one chip,

2. Optically sampled Analog-to-Digital Converter according to claim 1, characterized in that a pre-distortion stage (13) is provided at the electrical input (12) of the analogue signal.

3. Optically sampled Analog-to-Digital Converter according to claim 1, characterized in that the optical source (1) is a single continuous wave laser.

4. Optically sampled Analog-to-Digital Converter according to claim 1, characterized in that the multi wavelength generator (2) is a combination of nonlinearity and dispersion in ring structure.

5. A method of converting an analogue signal to a digital signal using the optically sampled Analog-to-Digital converter according to claims 1 to 4, wherein the method comprising:

- providing a single wavelength by an optical source (1) ;

- generating optical signals with different wavelengths by a multi wavelength generator (2) out of the single wavelength of the optical source;

- shifting in time and delaying the different wavelengths by using a chromatic dispersion element (3) ;

- mapping the different optical signals to different waveguides (6) by a de-multiplexer (5);

- converting the amplified signals to digital signals by analog-to-digital converters (9).

6. The method according to claim 5, characterized in that the electrical analogue signal is pre-distorted by a pre-distortion stage (13).

7. The method according to claims 6, characterized in that the pre-distortion stage (13) compensates nonlinearities of the electro optical modulator (4). 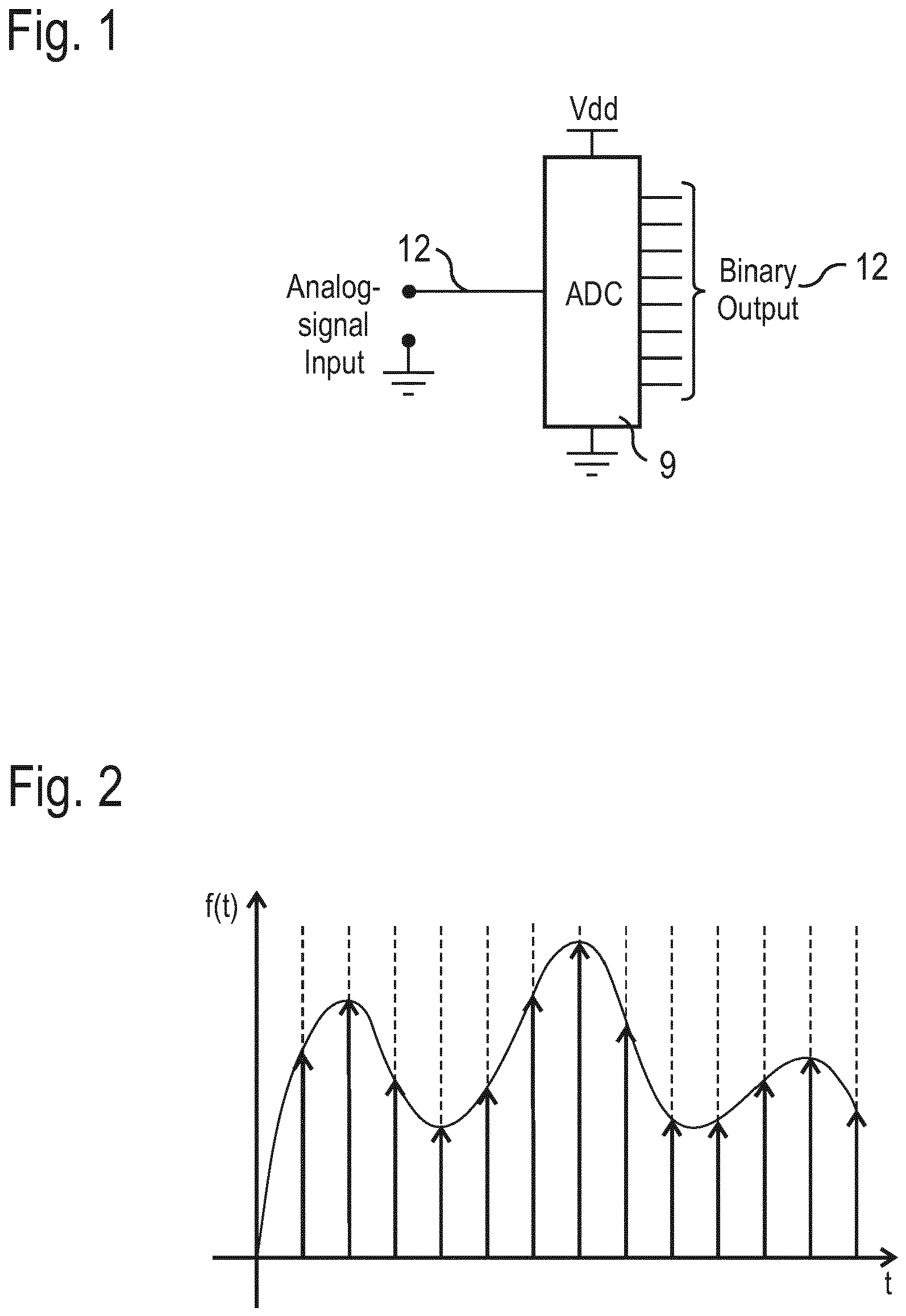 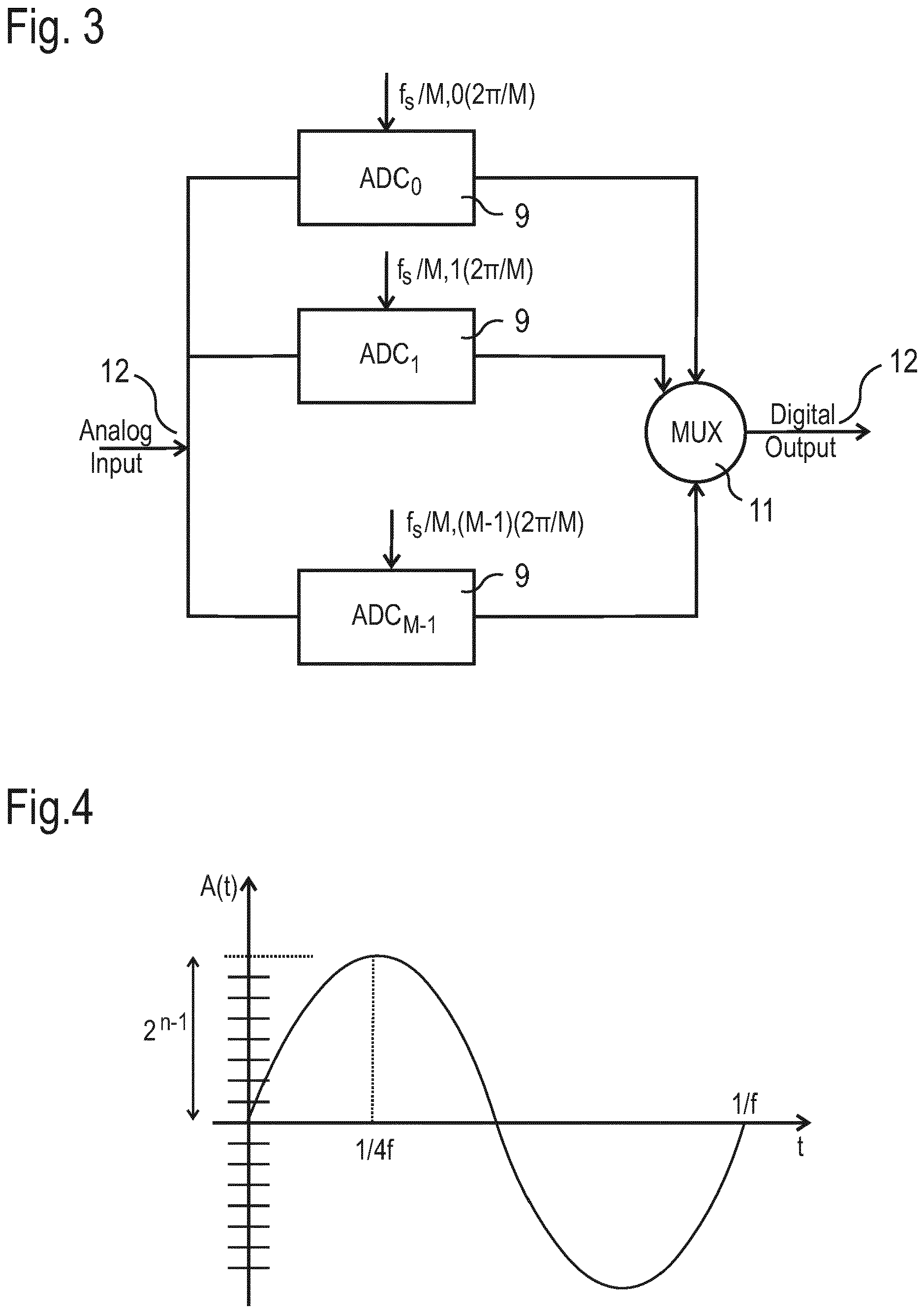 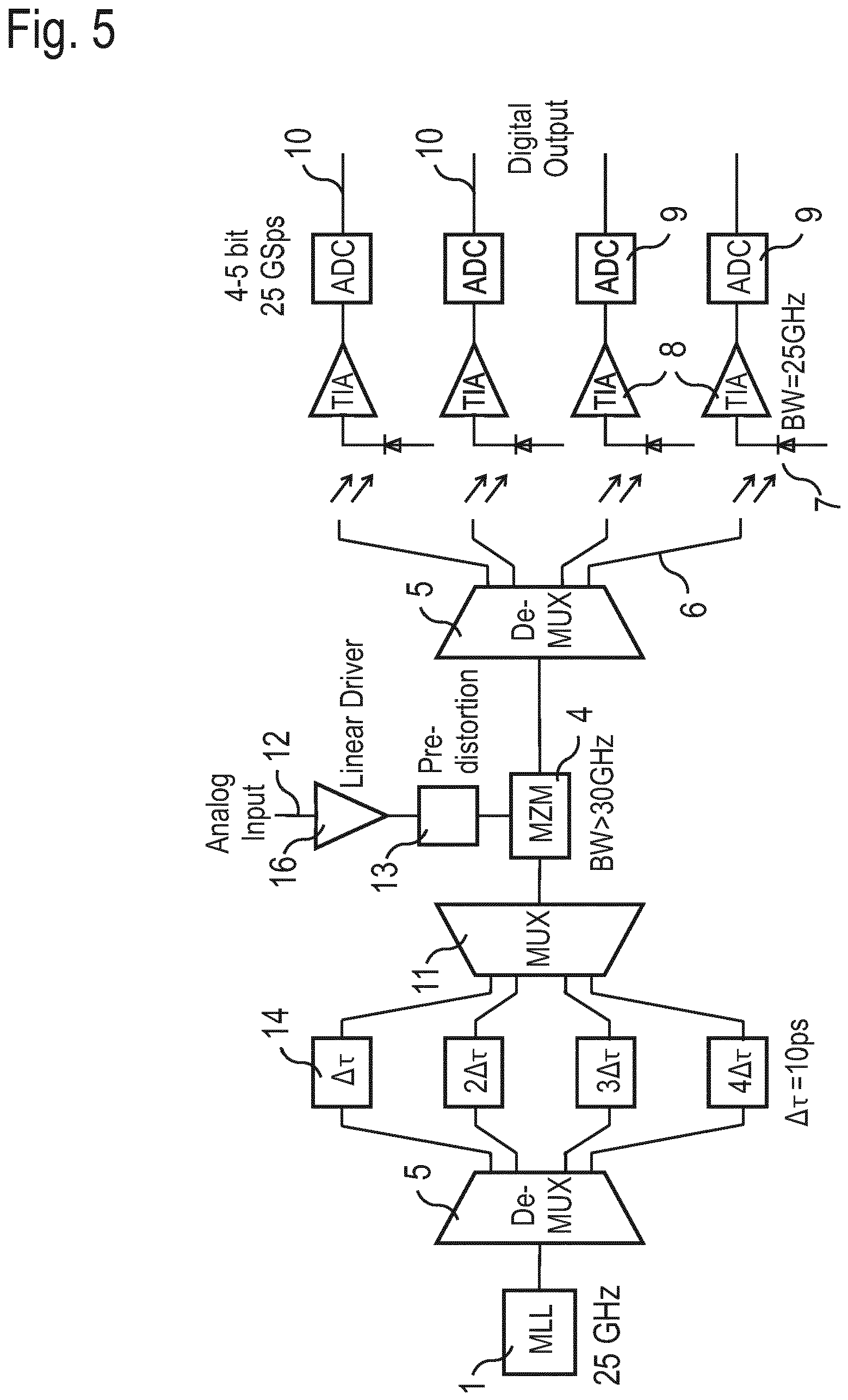 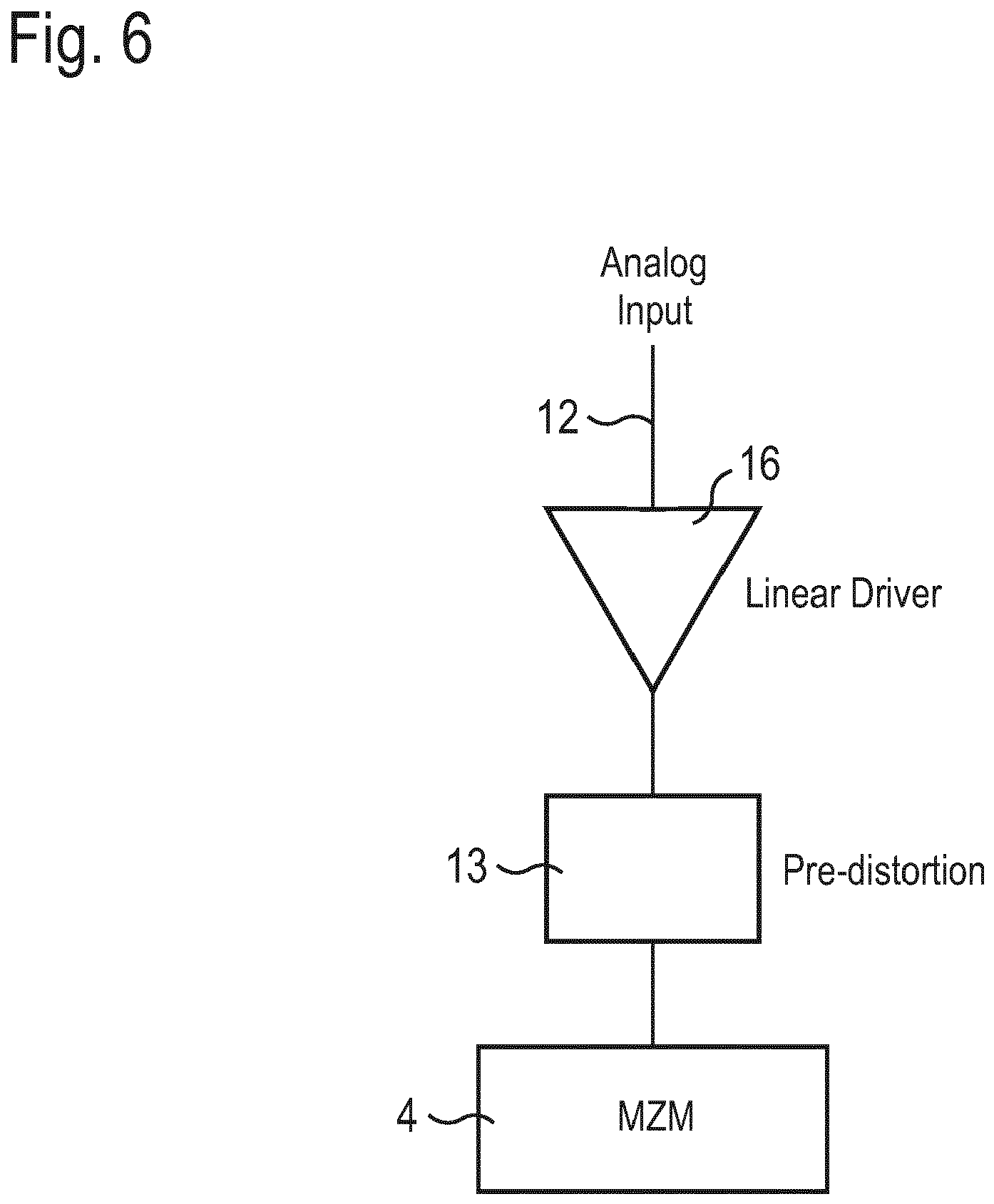 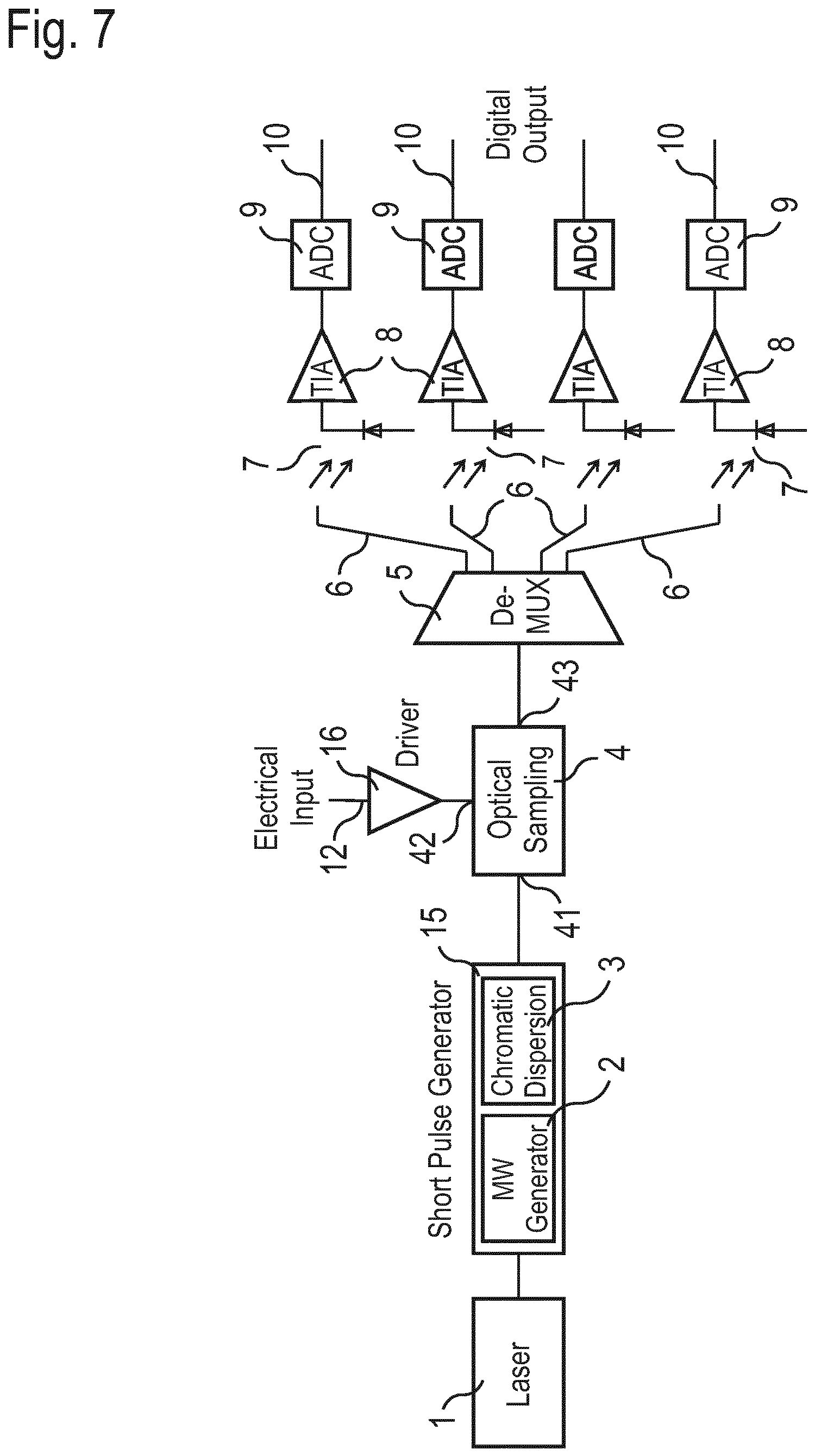