figure 1 is a schematic illustration of a first embodiment of a beverage dispensing device in accordance with the present invention;

[0024] The beverage dispenser 1 illustrated in figure 1, is a beverage dispenser of the type addressed as a home appliance, which is typically designed for home use to dispense one beverage per dispense cycle and which is configured as a table top appliance meaning it has a restricted height of about maximum 50cm and a areal footprint of about maximum 2500 cm2.
[0025] The beverage dispenser comprises a housing 2 comprising a base liquid inlet 3 which is connected to a source 4 of a first base liquid source 5.
[0026] The dispenser beverage inlet 3 can for example be a pipe fitting which is suitable for connecting a source 4 to the beverage dispenser 1 or it can just be the inlet of a pipe or flexible tube used for flow of the base liquid 5 away from the source 4.
[0027] The base liquid 5 can be any product that could be used for composing a beverage, such as for example water, a malt-based beverage, a fermented beverage, beer, a cider based beverage or cider, a juice, a soft drink, milk, cream, coffee, tea or mixtures thereof, the base liquid source can either be non-carbonated or carbonated.
[0028] Depending on the type of the base liquid 5, the source 4 from which the base liquid 5 is supplied and in which the base liquid 5 is contained, can be for example a container, a plastic bag, a bottle, a keg or cask and so on.
[0029] The source 4 can be a pressurized vessel, containing a pressurized gas for driving the base liquid 5 out of the vessel.
[0030] In other cases the source 4 can comprise pumping means or separate gas bottles for that purpose.
[0031] It is clear that all kinds of other commonly used elements, such as valves, switches, detectors, electronic or not electronic controller equipment in general are not represented in the drawings.
[0032] The source 4 is in this case connected to the inlet 3 by means of a liquid line 6, formed for example by a flexible or rigid tube or pipe 6.
[0033] Turning now to the housing of the dispensing device, the base liquid inlet is coupled to a liquid line extending from the base liquid inlet to a beverage outlet through which a final beverage is to be dispensed.
[0034] The housing further comprises at least one container receiving means 7 for receiving an ingredient container 8 such as a pod or capsule comprising a unit dose of a beverage ingredient. The receiving means comprising an ingredient discharge 9 through which the unit dose contained in the pod or capsule can be discharged in the fluid line upon dispensing.
[0035] The ingredient containers comprise exactly one unit dose of beverage ingredient and are therefore suited for preparing exactly one beverage allowing maximal flexibility to customize a beverage to be dispensed. The containers are preferably of the kind generally addressed as pods or capsules and will be referred to as such in the description below.
[0036] The pods or capsules preferably comprise a solid or liquid ingredient, varying from hop concentrates, fruit concentrates, sweeteners, bittering additives, concentrated spices, foaming promoters, concentrated malt-based liquids, concentrated fermented liquids, concentrated beer, colorants and or mixtures thereof.
[0037] In this case the liquid line comprises two sections, a first extending from the base liquid inlet to a liquid inlet of the receiving means for guiding base liquid into the pod or capsule such as to discharge the unit dose beverage ingredient through the beverage discharge into the second section of the liquid line extending from the ingredient discharge at the receiving means to a beverage outlet 10.
[0038] At a location downstream the ingredient discharge, a mixing chamber 11 is provided in the liquid line, which mixing chamber comprises a wall defining a chamber having a liquid inlet and a liquid outlet, both controlled by a valve.
[0039] According to the invention, the device comprises a pressure regulator for controlling the pressure in the liquid line. Such pressure regulator 12 can be provided at the source 4 or can be provided separately in the device. The pressure regulator should be controllable by means of a control unit 13 preferably an electronic unit comprising a microprocessor housed in the dispensing device.
[0040] The device further comprises a pod or capsule comprising identification means 14 such as for example a bar-code scanner or RFID scanner that allows identifying content related identity tags on the pods or capsules such as a bar code or RFID tag 15.
[0041] In this case the pressure regulator control unit also comprises a memory comprising a set of pre-loaded dispensing pressure level sequences for setting and varying the pressure in the liquid line during a dispensing cycle, whereby the microprocessor selects a sequence based on input received from the pod or capsule identification means and controls the pressure regulator accordingly.
[0042] In order to allow a good control it is further preferred that the control unit comprises a flow meter allowing determining the volume of liquid flowing through the liquid line as an input to the microprocessor.
[0043] The source of pressurized gas can either be a metal high pressure cartridge

1. Method of preparing and dispensing a beverage with a dispensing device (1), the device comprising:

the method comprising the steps of:

- providing the container (8) in the device;

- mixing the content of the container with the base liquid to prepare the beverage to be dispensed; 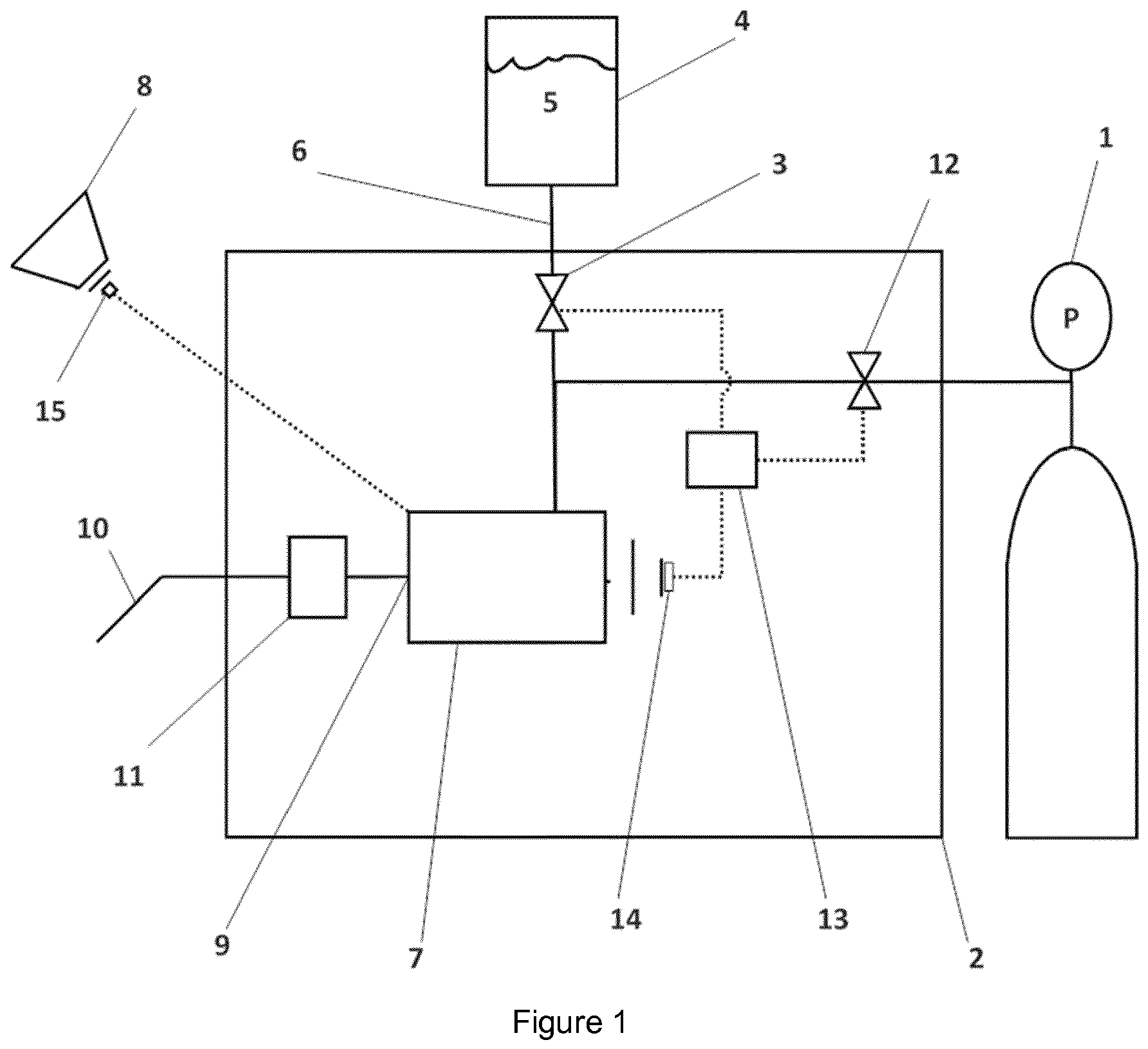