[0002] The present principles relate to coffee makers. More particularly, they relate to the incorporation of a grounds basket into a French coffee press device.

Description of the related art

[0003] The use of coffee maker known as a French Presses commonly known. It is well known to use French press coffee makers to "steep" coffee. Namely, boiling water is mixed with coarsely ground coffee in a container or carafe. After the coffee is allowed to steep for several minutes, one presses down on a handle, thus containing the grounds in the bottom of the container beneath a perforated disk. The disk is perforated to allow the liquid coffee to pass through the disk as the disk is being lowered through the liquid. The coffee can then be poured (or drunk directly) from the container while the grounds are prevented from flowing out of the container.
[0004] One primary disadvantage to the current designs of French presses is when it comes time to clean the same. Although the grounds are compressed at the bottom of the press, they are loose at the bottom of the carafe and need to be removed from the bottom after brewing. This removal process is difficult and tedious, and often deters individuals from wanting to use the French press at all.
[0005] It would therefore be desirable to have a French Press design that allows for easy removal of the grounds, and therefore easier cleaning and ultimate use of the same.
DE 3432289 U discloses a coffee maker including a container and a filter plunger guided in the coffee container. The coffee container includes a collecting dish which may be coupled to the pressed down filter plunger and pulled out of the container.
WO 2012/025125 discloses a similar device, wherein the bowl for collecting coffee, tea, etc., may couple with the plunger via a magnet.

[0006] The present principles provide a coffee grounds basket within the French Press that is configured to completely contain the coffee grounds within the same. The coffee grounds basket is attached to the center stem and moves with the same during the press action.
[0007] According to the invention, the coffee press includes the features of claim 1.
[0008] Other aspects and features of the present principles will become apparent from the following detailed description considered in conjunction with the accompanying drawings. It is to be understood, however, that the drawings are designed solely for purposes of illustration and not as a definition of the limits of the present principles, for which reference should be made to the appended claims. It should be further understood that the drawings are not necessarily drawn to scale and that, unless otherwise indicated, they are merely intended to conceptually illustrate the structures and procedures described herein.

[0009] In the drawings wherein like reference numerals denote similar components throughout the views:

FIG. 1 shows a cross-sectional view of the French Press coffee maker with coffee grounds basket, according to one implementation of the present principles;

FIGS. 4-10 show the details of the various parts of the French Press Coffee Maker and more specifically the parts that make up one embodiment of the coffee grounds basket of the present principles;

[0010] Before describing the figures in detail, applicant points out that the measurements, angles and all other specific indicia included in the drawings are for exemplary purposes only and are not in any way meant to limit the respective parts and their configurations. Departures from these indicia can be implemented without departing from the intended scope of this disclosure.
[0011] The following is a list of reference numerals and parts as shown in the Figures:

Bottom cup - 1 (preferably made of metal);

Mesh basket for grounds basket - 18A;

[0012] FIG. 1 shows a cross sectional view of a French press coffee maker 200 in accordance with the present principles. Applicant shall not discuss all of the operating parts of the coffee press as listed above and focuses on the inventive aspects of the same below.
[0013] As shown in FIG, 2, a coffee ground basket, generally depicted by reference numeral 100, is integrated into the press and operates to fully contain all the coffee grounds within the same.
[0014] The coffee ground basket has an outer cage 19 configured to receive a mesh basket 18A, which receives an inner cage 18B. The cages 19 and 18B are provided to add rigidity to the mesh basket 18A. Those of skill in the art will appreciate that the mesh basket 18A is generally made of a stainless steel metal foil having a micron sized mesh (e.g., 600 microns) and which, under pressure, could be crushed or deformed. As such support cages 19 and 18B are provided.
[0015] The inner cage 18B is covered by a lid 14 which can be removably secured thereto by threads, slots and notches or any other known means to secure a lid to a container. An upper mesh portion 15 is sandwiched between the lid 14 and an upper basket lid 13 and functions to completely enclose the mesh basket 18A which contains the coffee grounds. The connection between the upper basket lid 13 and the middle lid 14 can be performed with any known connection mechanism. As shown, a plurality of protrusions 30 can be positioned around the upper surface of the lid 14 with corresponding receiving holes 32 in the underside of the upper basket lid 13, such that a friction fit between the two parts operates to secure them together while retaining mesh portion 15 there between. A central protrusion 34 can assist in proper positioning of the upper lid 13 with respect to lid 14, and will be received by a hold 36 in the upper lid 13. Those of skill in the art will appreciate that the connection mechanism between upper lid 13 and middle lid 14 can be achieved in many different ways, including, but not limited to a mechanical latch system.
[0016] A silicon ring 16 is also secured between the upper lid 13 and the middle lid 14 such that the circumference of the same is in contact with the side walls of the carafe 2. The silicon ring 16 can include openings 40 that are aligned with the protrusions 30 in the middle lid such that the same does not shift or move once sandwiched between the upper lid 13 and middle lid 14. A cross section of one preferred implementation of the silicon ring is shown in FIG. 9.
[0017] In operation, the upper lid 13 is fixedly connected to the end of the press rod 7 by threading or other means. Thus, prior to use, the user will remove the basket 100 from the press. To open the basket, the user removes lid 14 from the inner cage 18B. This is generally done without having to separate the upper lid 13 from middle lid 14, thus keeping the sandwiched mesh plate 15 and silicon ring 16 in their proper operable positions. Once opened, the user fills the mesh basket 18A with the coffee grounds, and once filled, middle lid 14 is re-secured to the inner cage 18B with the provided locking mechanism.
[0018] The French press coffee maker is now ready for use by adding boiling water to the carafe 2 and sealing the top lid 6 to the same. Once assembled, the rod 7 can be moved downward (or upward), thus causing the brewing of the coffee contained in the basket. As will be appreciated, the silicone ring 16 seals the sides and the bottom of the coffee ground basket from liquid communication with the upper portion of the carafe/container 2. As such, when the rod 7 is moved downward, all liquid below and around the sides of the coffee grounds basket 100 will be forced through the basket and out the lid 14, through the mesh lid 15, thus operating to brew the coffee contained in the basket while maintaining all the coffee grounds within the same.
[0019] Once a user is finished drinking the freshly brewed coffee, the coffee ground basket assembly 100 can be removed from the carafe 2 and disassembled for removal of the used coffee grounds and cleaning. The carafe 2 will have no coffee grounds left in the same using the coffee grounds basket as disclosed here.
[0020] With reference to FIGS. 7 and 8, the mesh parts 15 and 18 have micron sized openings which cannot be easily depicted in the drawings shown. Those of skill in the art of coffee makers such as these will appreciate that the micron size can be varied so long as the same is sufficiently small to prevent the passing of coffee grounds from the basket into the water (i.e., coffee being dispensed).
[0021] For example, as noted above, the mesh basket 18A is positioned between an outer cage 19 and an inner cage 18B. This is because the micron perforated stainless steel used to fabricate mesh basket 18A is not rigid enough on its own to withstand the force applied to the same via rod 7.
[0022] While there have been shown, described and pointed out fundamental novel features of the present principles, it will be understood that various omissions, substitutions and changes in the form and details of the methods described and devices illustrated, and in their operation, may be made by those skilled in the art within the scope of the present claimed invention. For example, it is expressly intended that all combinations of those elements and/or method steps which perform substantially the same function in substantially the same way to achieve the same results are within the scope of the present claimed invention. Moreover, it should be recognized that structures and/or elements and/or method steps shown and/or described in connection with any disclosed form or implementation of the present claimed invention may be incorporated in any other disclosed, described or suggested form or implementation as a general matter of design choice. It is the intention, therefore, to be limited only as indicated by the scope of the claims appended hereto.

a press mechanism passing through the lid (12, 7), and

a mesh basket (18A) configured to be received within said outer cage (19);

at least one lid configured to enclose an upper opening of the combined outer cage (19), mesh basket (18A) and inner cage (18B) so as to completely enclose the coffee grounds basket, characterised in that the lid further comprises:

2. The coffee press according to claim 1, where the press mechanism comprises a movable rod (7) configured to move the coffee grounds basket (100) up or down within the carafe (2).

3. The coffee press according to claim 1, further comprising a sealing mechanism (16) connected to said lid and being configured to seal against internal side walls of the carafe (2) such that the sides and bottom of the coffee grounds basket (100) are sealed from liquid communication with an upper portion of the carafe (100) during a downward press action of the rod (7). 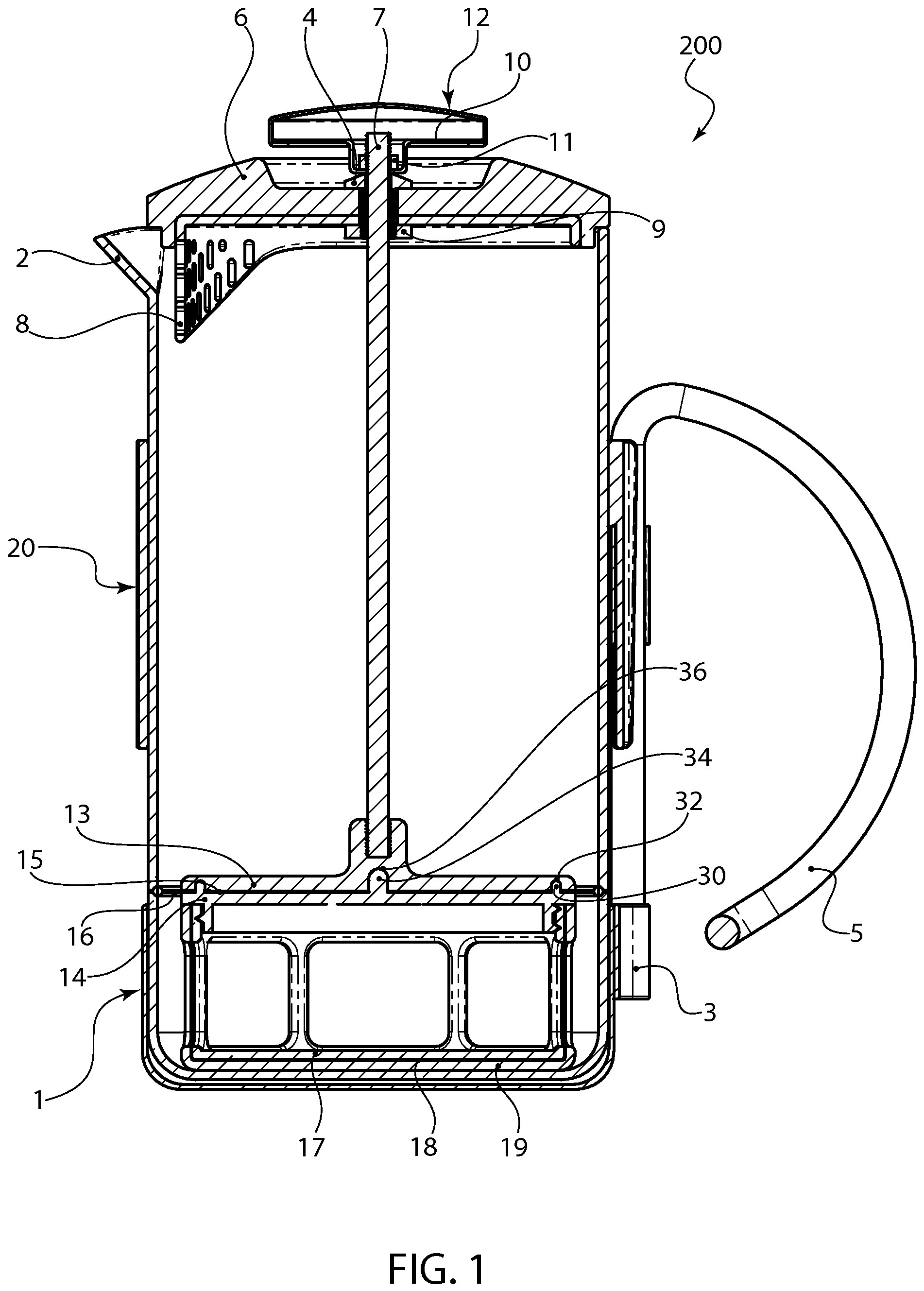 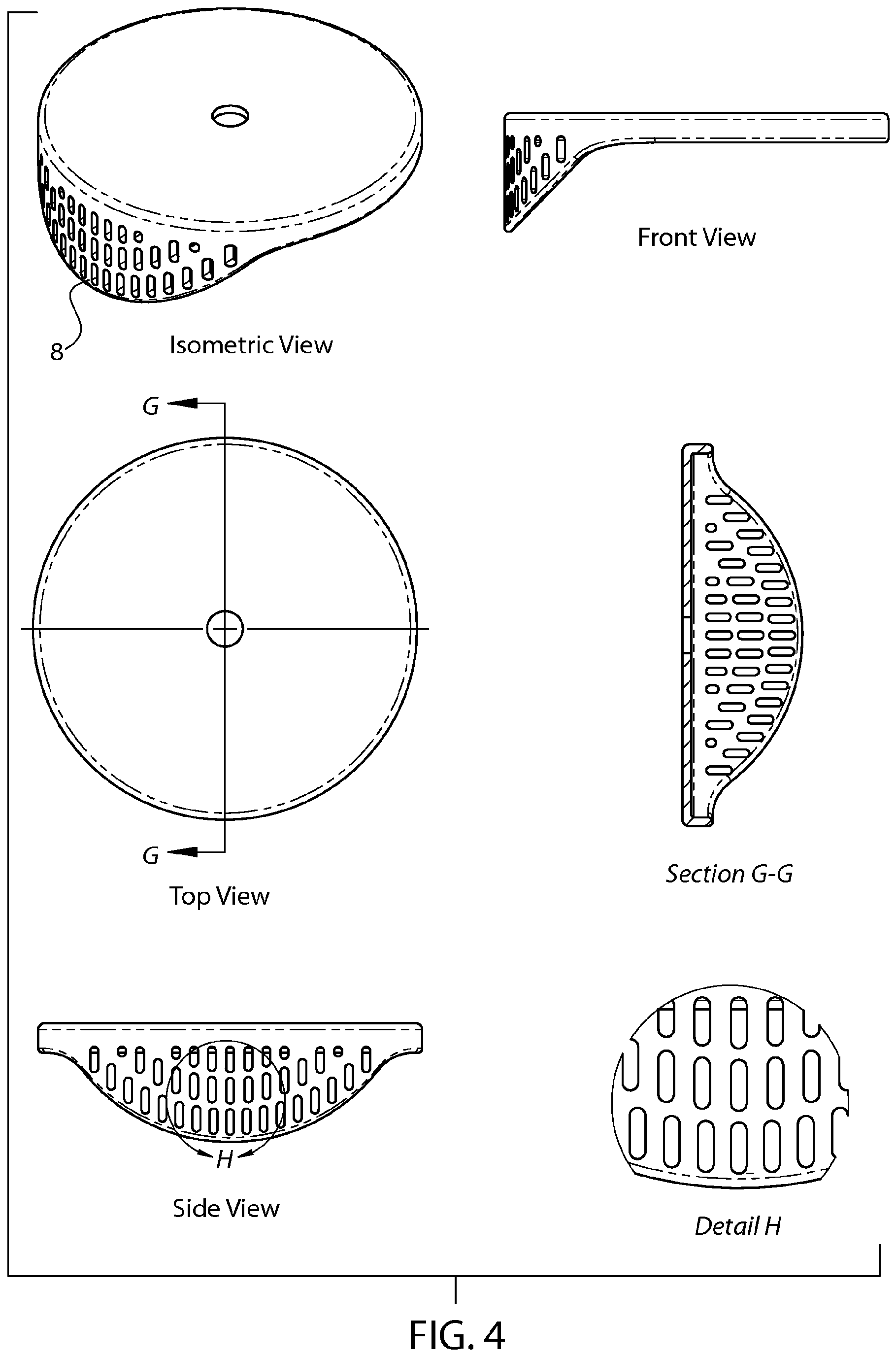 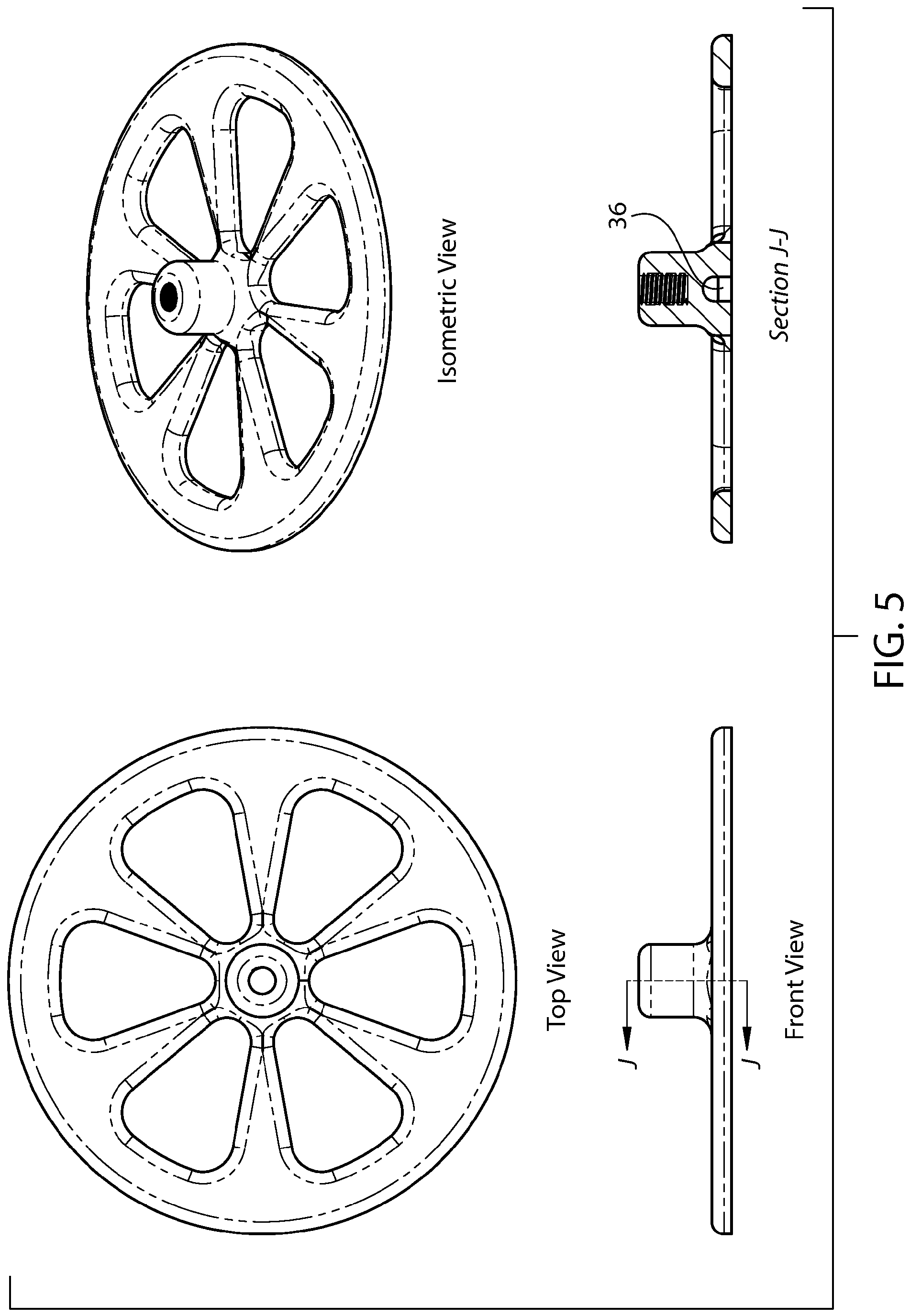 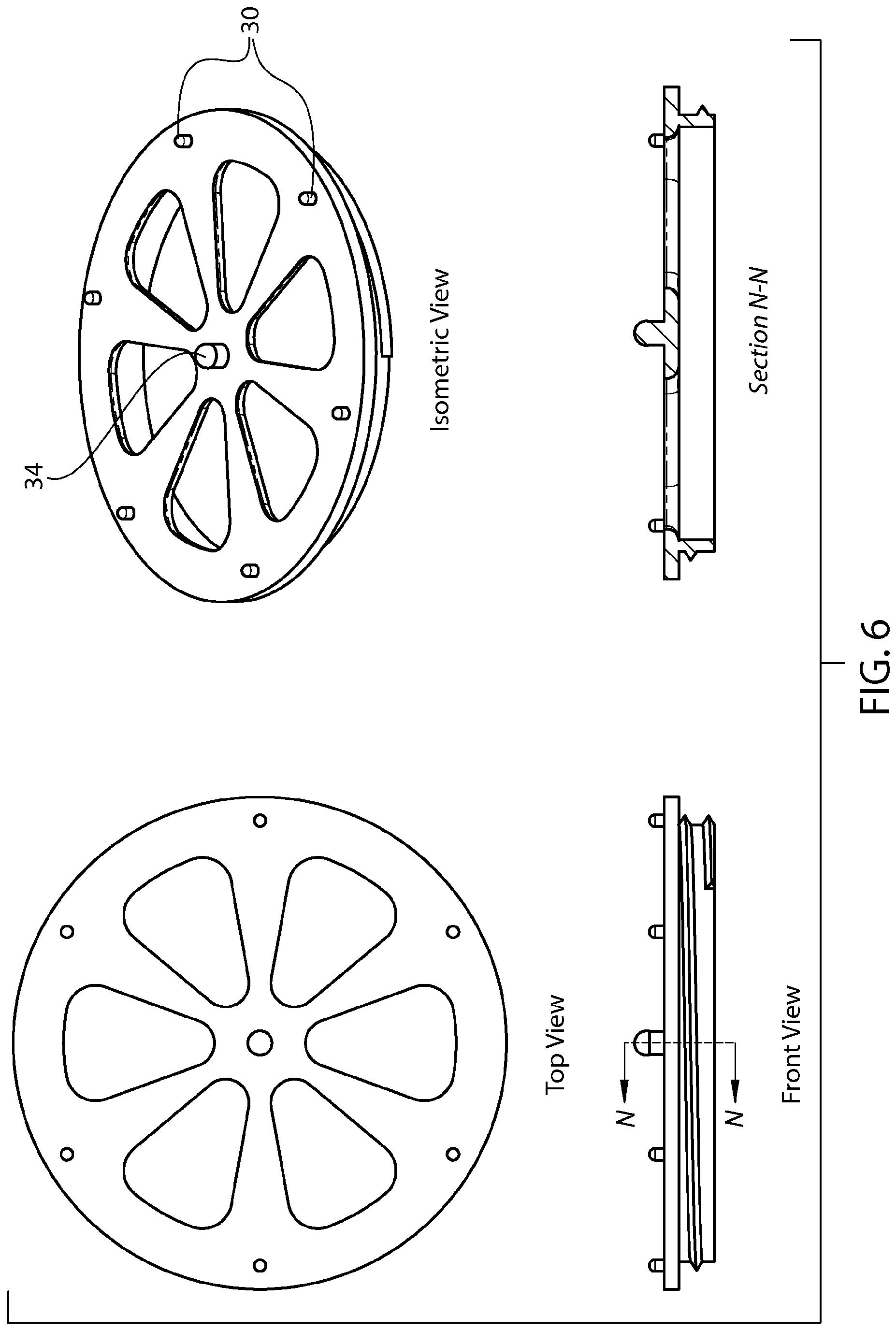 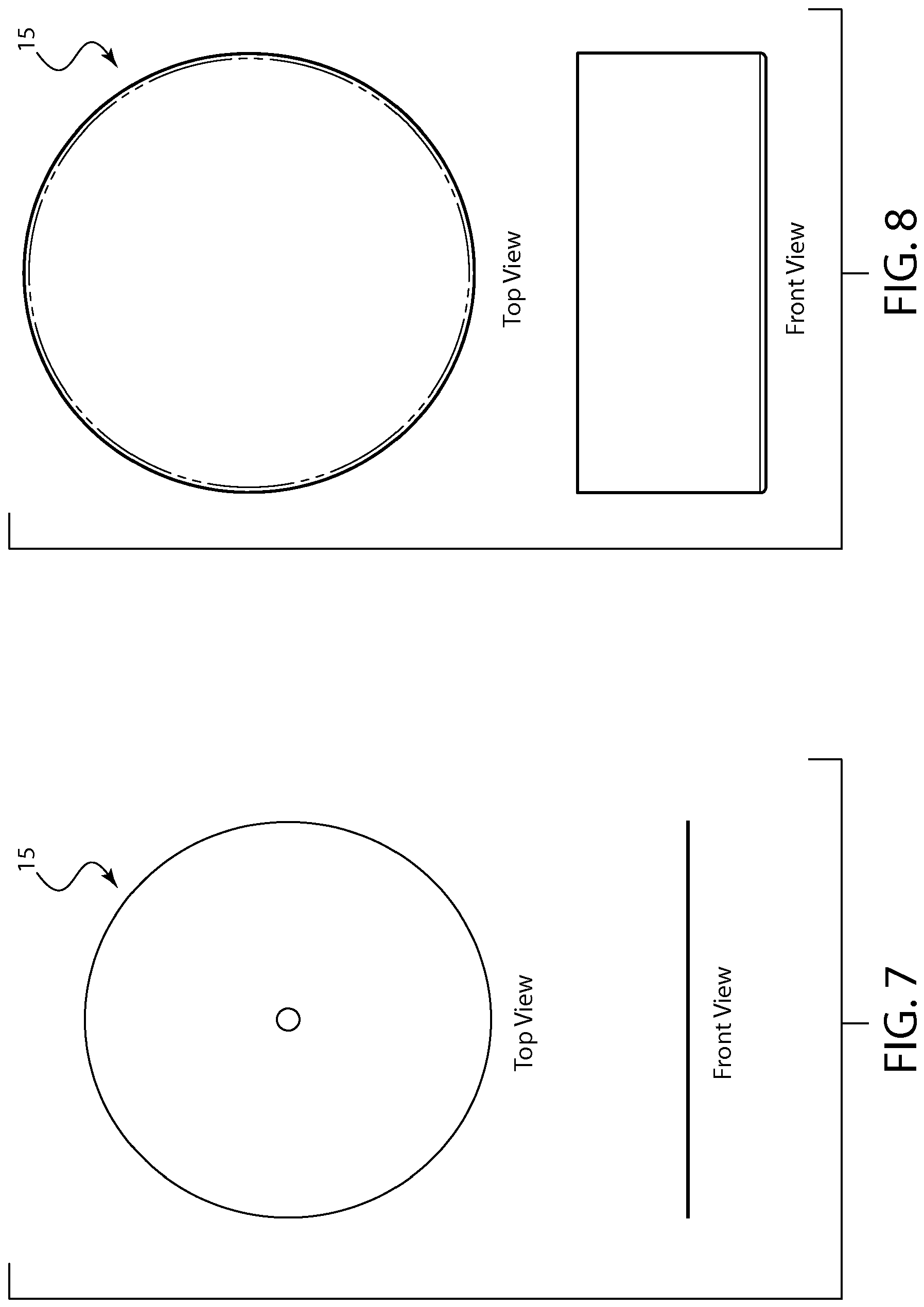 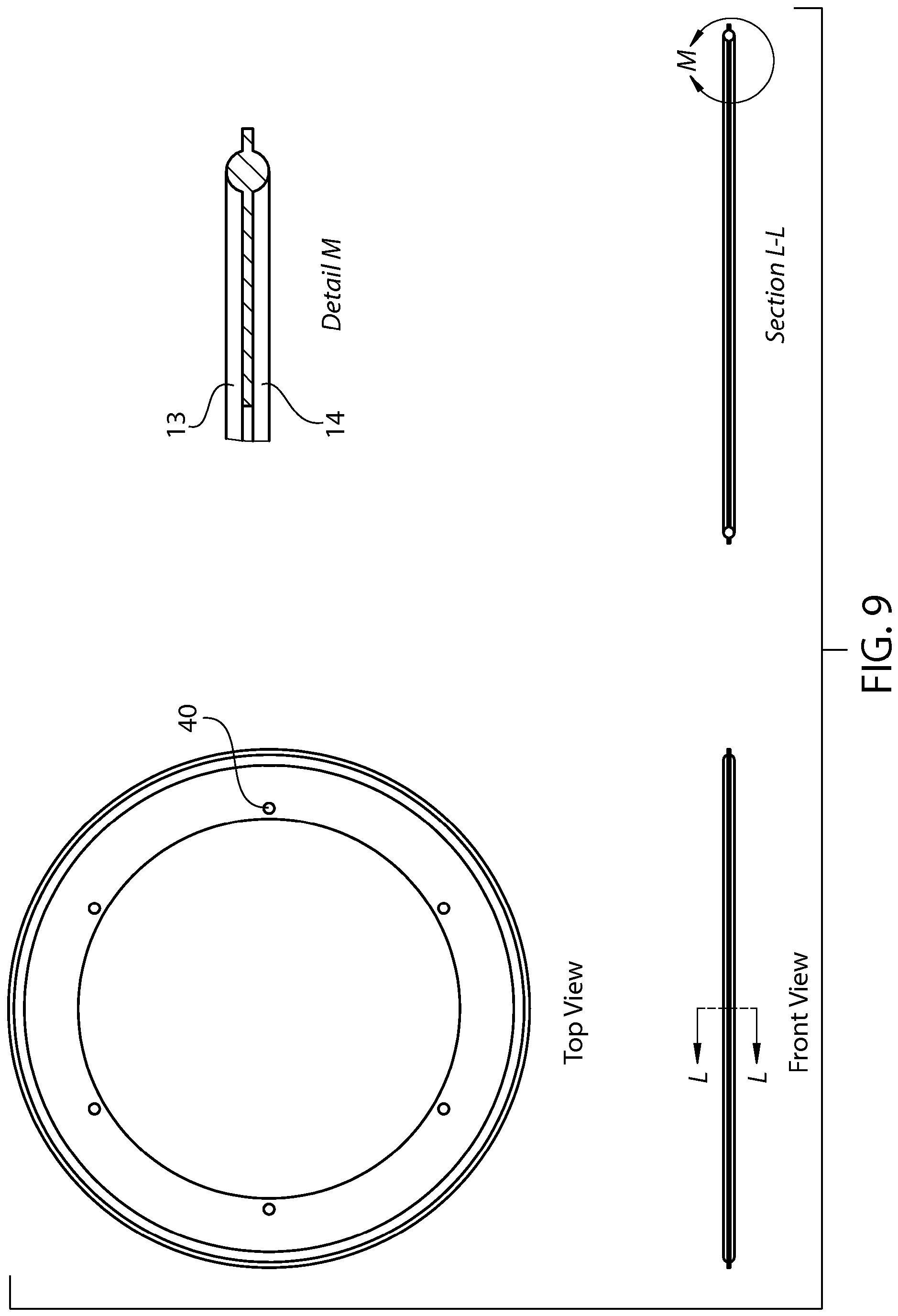 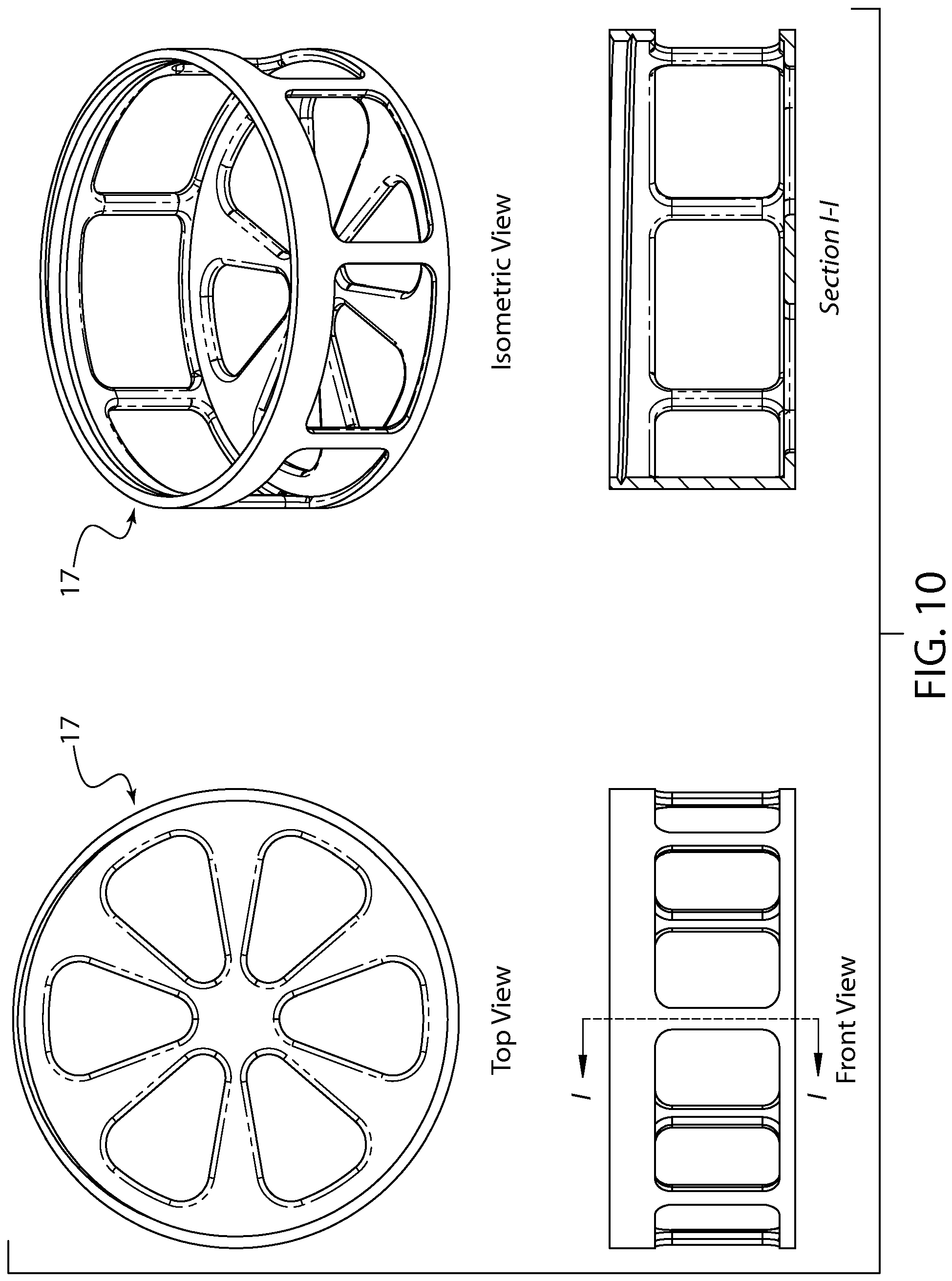 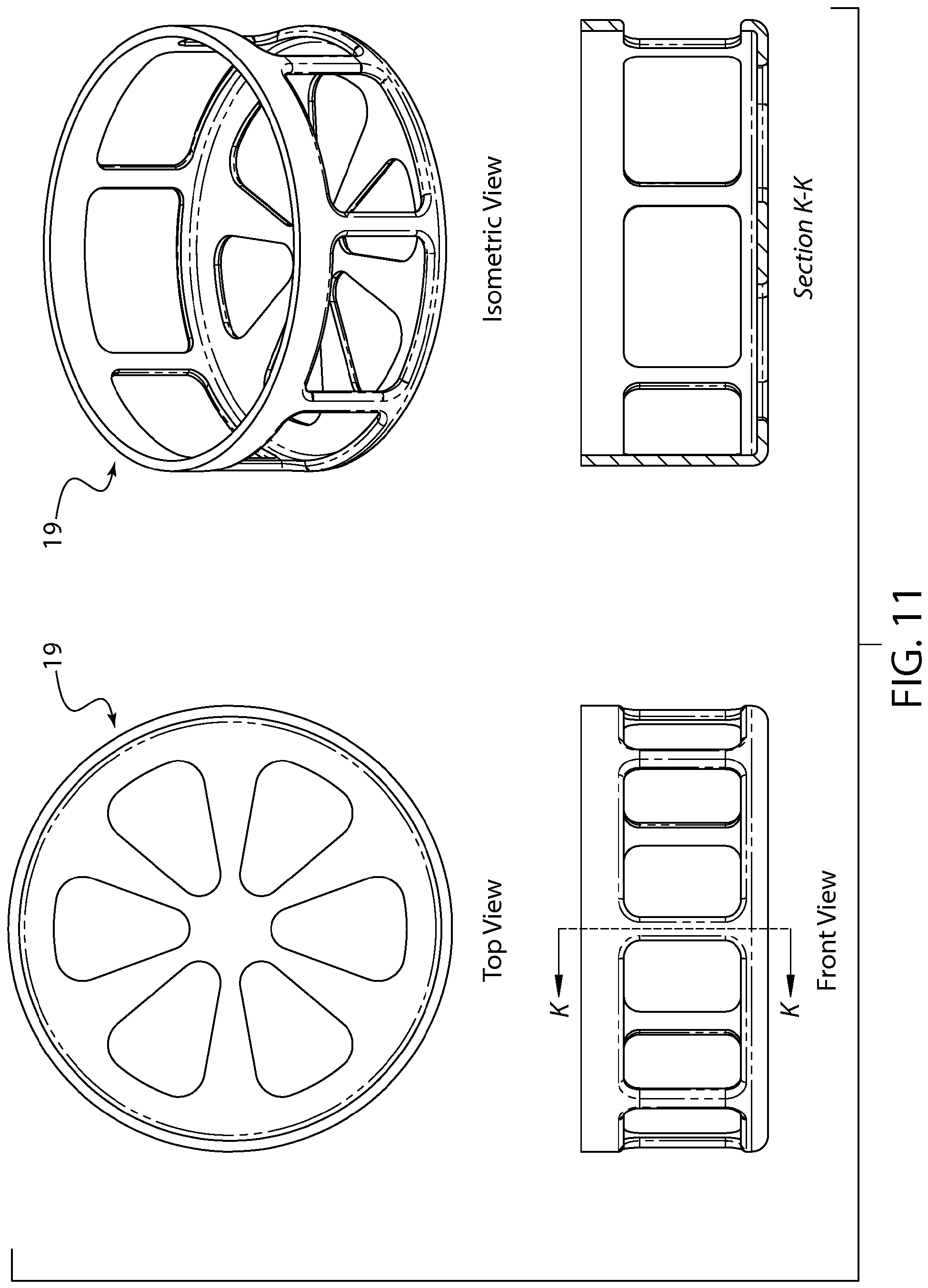