[0001] The present invention relates to a system and method for advising wireless computer networks on inter-network interferences.

[0002] In a multiple network environment deployed in a large field there is a need to manage the interference during the lifetime of the networks. This is because several communication protocols such as Wireless Highway Addressable Remote Transducer (WirelessHART) and WLAN work on the same Industrial, Scientific and Medical (ISM) frequency band, and sometimes in close vicinity, causing interference to each other.
[0003] Both WirelessHART and WLAN standard-based networks are deployed to operate on the same unlicensed radio frequency bands meant for industrial, scientific and medical (ISM) usage. When both these networks are operated in the same industrial plant or in the near vicinity to each other, then there is bound to be interferences between them. The effect of these interferences and the resulting performance degradation are well-known in the art.
[0004] In a WirelessHART network, the pseudo-random channel hopping feature ensures that the WirelessHART network is not fixed on a particular channel for any lengthy period of time. Thus this feature can eliminate the interference to a certain extent. However, problems occur when two or more packets of information are transmitted at the same time and frequency such that the packets "collide" in the same physical space. Even with careful system modeling and the deployment of the network, it is not always possible to limit the interferences over a life cycle period of the industrial plant; this could mainly be due to the change in topology of either of the network (addition or removal of the network elements) or with the change in the plant physical structure itself. Any pre-operation interference avoidance technique mainly considers only the historical interference information data for giving any necessary inputs to the planning and the engineering phase. Thus the dynamic changes in the network (topology, physical structure, priority to certain network elements) and the resulting interferences occurring during the operation phase cannot be adequately addressed. Accordingly, additional measures are required during the operational phase of the network so as to limit the effects of interference, from other interfering networks.
US 2011/0280226 A1 describes a method for reducing interference between wireless networks for industrial devices including the steps of obtaining a first resource schedule from a first wireless network manager, obtaining a second resource schedule from a second wireless network manager, and providing, when at least one resource conflict is determined, a new wireless resource schedule to the first network manager to avoid at least part of said determined resource conflicts.
US 2012/0108179 A1 describes a method, apparatus and computer program product to provide for wireless resource sharing between heterogeneous wireless networks to enable coexistence in a TV band white space.

Objects of the present invention

[0010] The present invention provides a system and method for advising wireless computer networks in an industrial plant on inter-network interferences during their life time. The method of the present invention initially observes initial channel utilization profiles along with corresponding time-slots of dynamic network elements and network characteristics of a first network and stores as historical channel utilization profiles. The initial transmission profiles of an interfering second network are also recorded. The threshold transmission profiles are then recorded as historical transmission profiles. The aggregator determines interference patterns, by comparing historical channel utilization profiles with runtime threshold transmission profiles, advises and pre-warns appropriate network actions to a network manager of the first network on the interference prone zones. Advising network actions includes one or more of avoiding time-slot and frequency synchronization of the network events, and managing the network events through lower throughput. The network events are indicative of one or more activities in the industrial plant causing peak consumption of network bandwidth. The system of the present invention includes first network with a common multi-network interference observer, to advise on network interferences.

FIG.2 is a schematic representation of the common multi-network interference advisor of the system of the present invention.

FIG.3 is a flow drawing that illustrates an example of method of advising wireless network on inter-network interferences.

FIG.4 is a flow drawing that illustrates an example of method of determining, channel utilization profiles and network characteristics of a network.

FIG.5 is a flow drawing that illustrates an example of method of advising and pre-warning of networks on inter-network interferences.

FIG.6 is a schematic drawing depicting interference prone zones of an interfered network.

FIG.7 is an exemplary flow drawing of process flow of CMIA, in addressing wireless HART interferences.

FIG.9is a table that illustrates an example of method of where dynamic changes in channel and time-slot occupancies of an interfered network are implemented.

[0066] A first network is provided with WLAN and a second network with WirelessHART architectures. The WirelessHART is arranged to fall within the working range of the WLAN network, whereby overlapping of channel utilization profiles of WLAN clients by the WirelessHART field devices, is observed. CMIA provides WLAN network managers with the transmission schedules of WirelessHART devices and the network manager advises WLAN access point to centrally control the transmission of the first network based on the static schedule information available from the wirelessHART network, as shown in FIG.8. The link table as shown in FIG.8 having the transmission schedule information of the WirelessHART network is fed into an entity controlling the WLAN transmissions via the CMIA. Typically in a WirelessHART network, the channel and the time slots schedule between the different field devices is already defined by the network manager during the configuration stage. A table like this remains static until the next configuration period. This information is directly fed to WLAN, and based on this information, the WLAN network schedules its transmissions within the high interference zones at the appropriate time and with non-interfering channel. Considering a transmission profile of the WirelessHart seeking the resources of the WLAN, where activity from the WirelessHART causes interference to the select zones, the corresponding channels of WLAN are affected by the interference. For instance, as shown in FIG.8, the channel No. 7 in the time slot 1 receives instructions from networkmanager to shift to channel No.2. Similarly, activity of channel No.2 is shifted to channel No. 6 of time-slot 29.
[0067] Some of the exemplary scenarios of the communication between network managers and the CMIA are as shown in FIG.9. These exemplary scenarios highlight the determination of threshold interferences (transmission profiles) and the corresponding networking advices and actions, including pre-warnings.
[0068] In one scenario, a WirelessHART network manager can inform the CMIA of the transmission schedule for the next interval. The CMIA passes on this information to the other Network managers in the vicinity, and the other network managers take necessary actions to avoid the time-slot & frequency combination to avoid possible interference to itself, and to the WirelessHART network, as shown at S.No. 1 of FIG.9.
[0069] In another exemplary scenario, in an establishment where the enterprise WLAN co-exists with a factory WirelessHART network, the historical database contains patterns related to WLAN network, such as the expected period of time it is active. The CMIA advices the factory WirelessHART to reduce bandwidth usage during this busy period, or to route the packets in a mesh path that is away from the office space, as shown at S. No. 2 and 3 of FIG.9.
[0070] In yet another exemplary scenario, the network manager of one network can intimate the CMIA that a given channel would be active for a given period of time. The CMIA advices other network managers in the vicinity, so that they can avoid the given channel, as shown at S.No. 4 and 5 of FIG.9.
[0071] In yet another scenario where wireless applications are used in heavy engineering enterprises such as Mining, Oil and Gas, where an interfering network event is followed by a flurry of network activity. For instance, an approaching container or a dump vehicle, which is followed by a lot of communication over the communication network, to coordinate the actions of different nodes in the vicinity. The CMIA detects such communication patterns corresponding to an event, and predicts the network activity based on such events. It advises the networks in the vicinity, about the upcoming busy period for the network, based on the events it detected, so that the nearby network managers can take steps to manage interfering traffic, shown at S.No.6 of FIG.9.

Advantages of the present invention

1. A method for advising wireless computer networks in an industrial plant on inter-network interferences during their life time, said method comprising the steps of:

(vi) issuing a pre-warning and an alert to said network manager (103) on said channel utilization profiles based on said interference patterns,

wherein the network events are indicative of one or more activities in the industrial plant causing peak consumption of network bandwidth.

2. The method as claimed in claim 1, wherein said observation of initial and threshold runtime transmission profiles is performed by:

a. identifying the name of said interfering second network;

b. detecting node IDs of said first network that are to be interfered by said interfering second network; and

3. The method as claimed in claim 1, wherein said advising of networking actions, comprises one or more steps of:

c. blacklisting of channels under use by said network elements of said first network (101) for said second network; and

5. A system for advising wireless computer networks in an industrial plant on inter-network interferences during their life time, comprising:

(i) at least a first network (101) with dynamic network elements and at least an interfering second network (102) with a network manager (103);

- a network action communicator operably connected to said aggregator and configured to communicate said network advices to said network manager (103), wherein the network events are indicative of one or more activities in the industrial plant causing peak consumption of network bandwidth.

7. The system as claimed in claim 5, wherein said first network is a wireless local area network and said second network is a highway wireless addressable remote transducer protocol or networks operating in industrial, scientific and medical band of frequencies.

8. The system as claimed in claim 5, wherein a transceiver (113) disposed to connect said first and second networks, said transceiver is a router, switch or an adaptor. 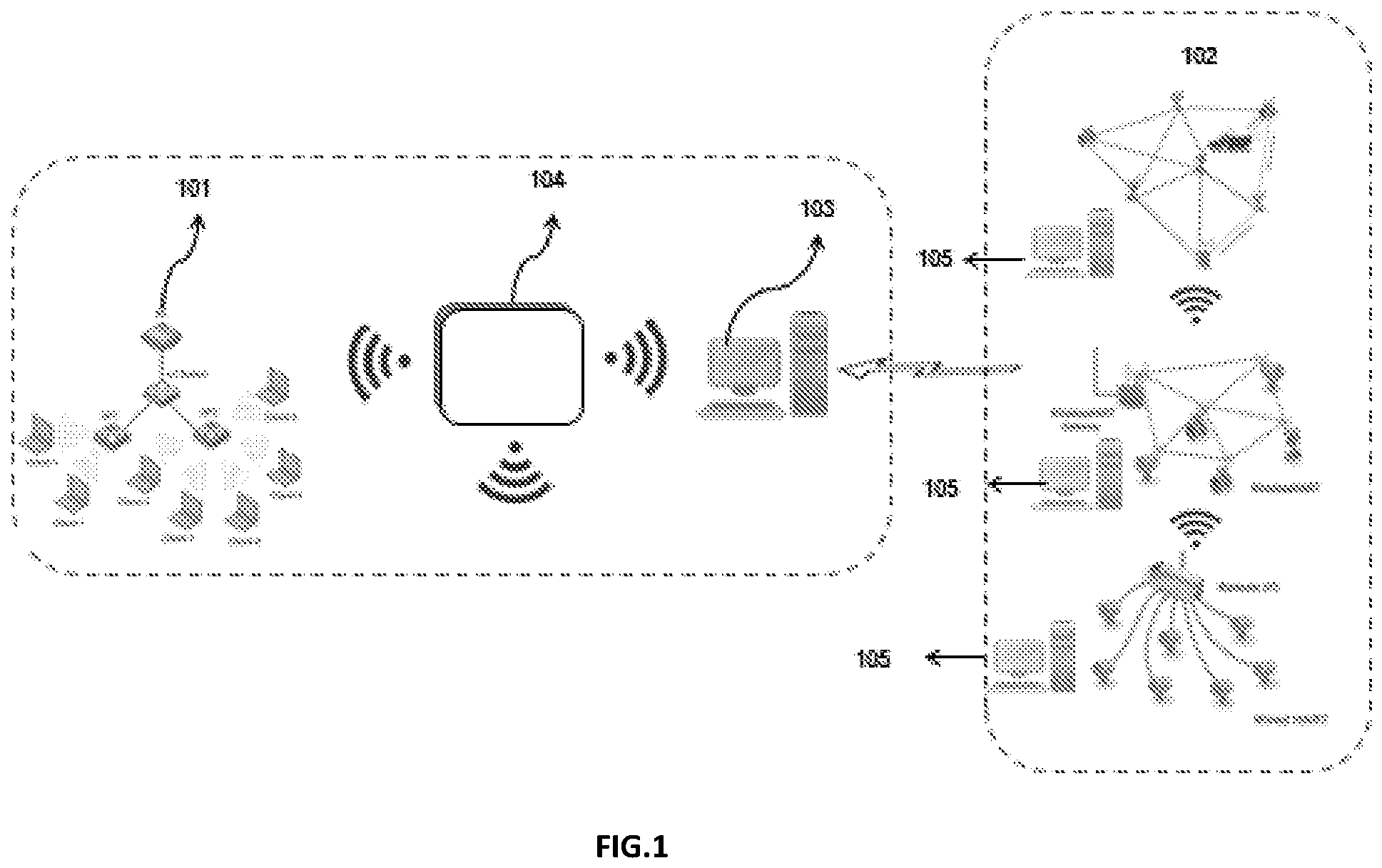 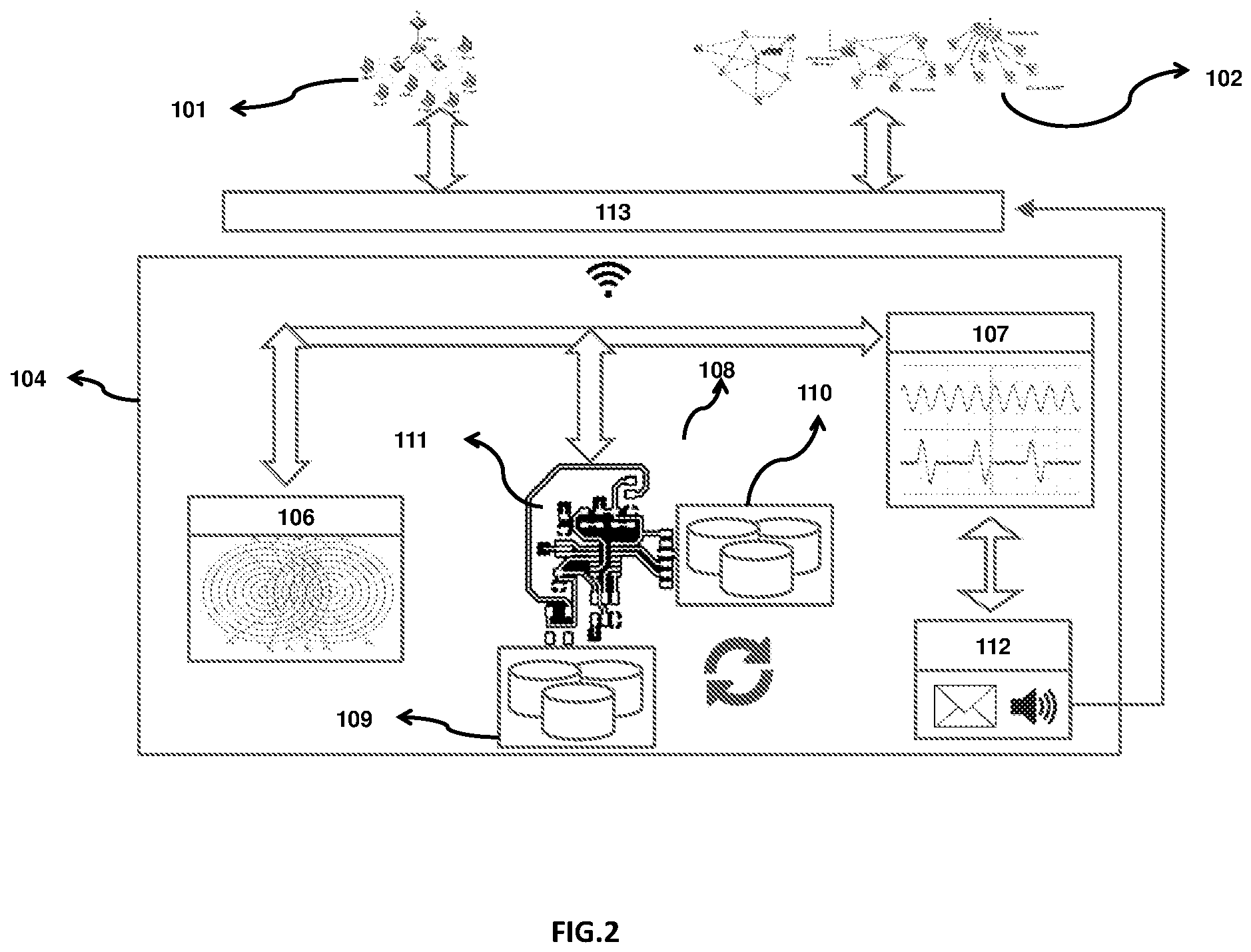 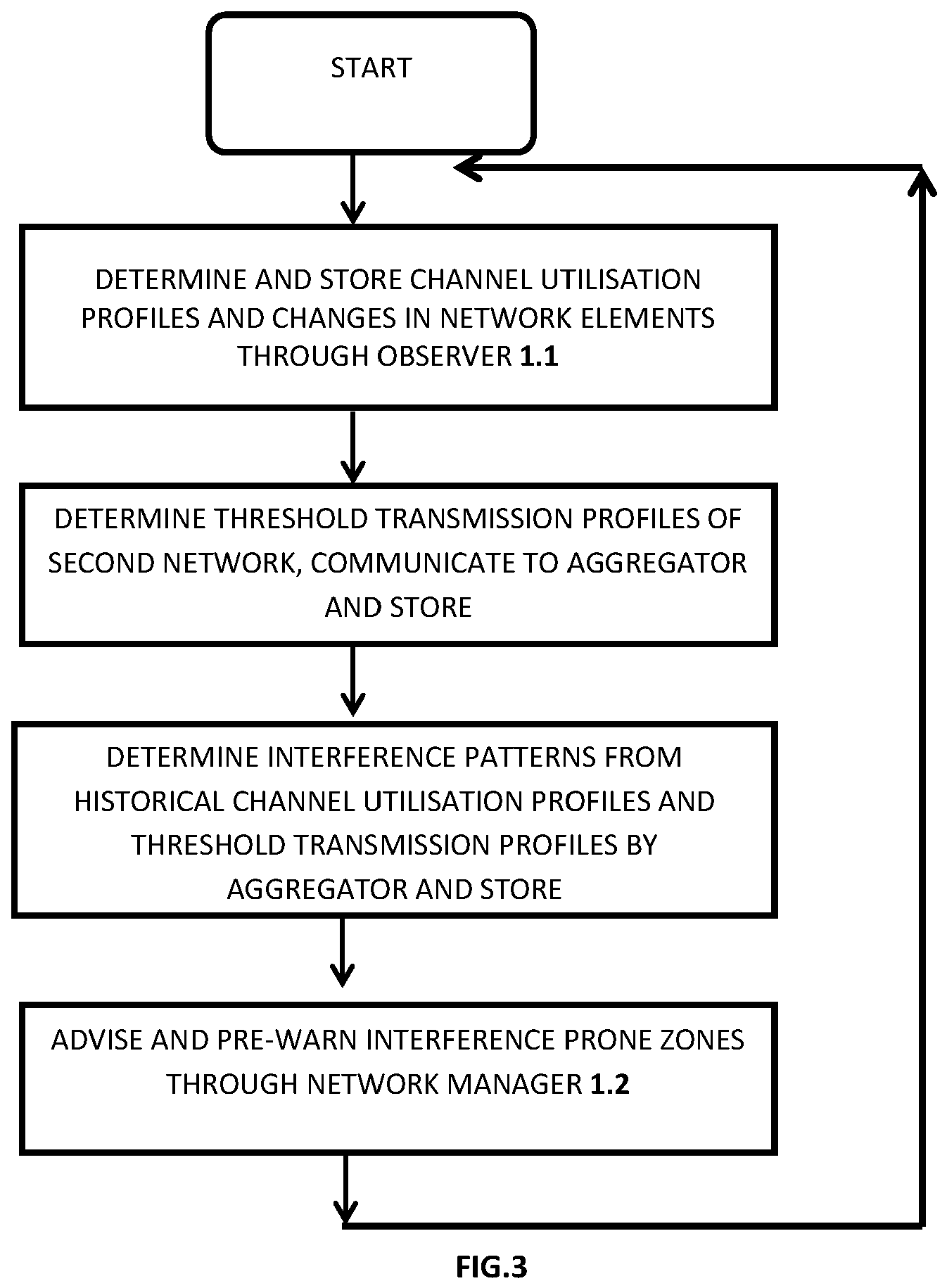 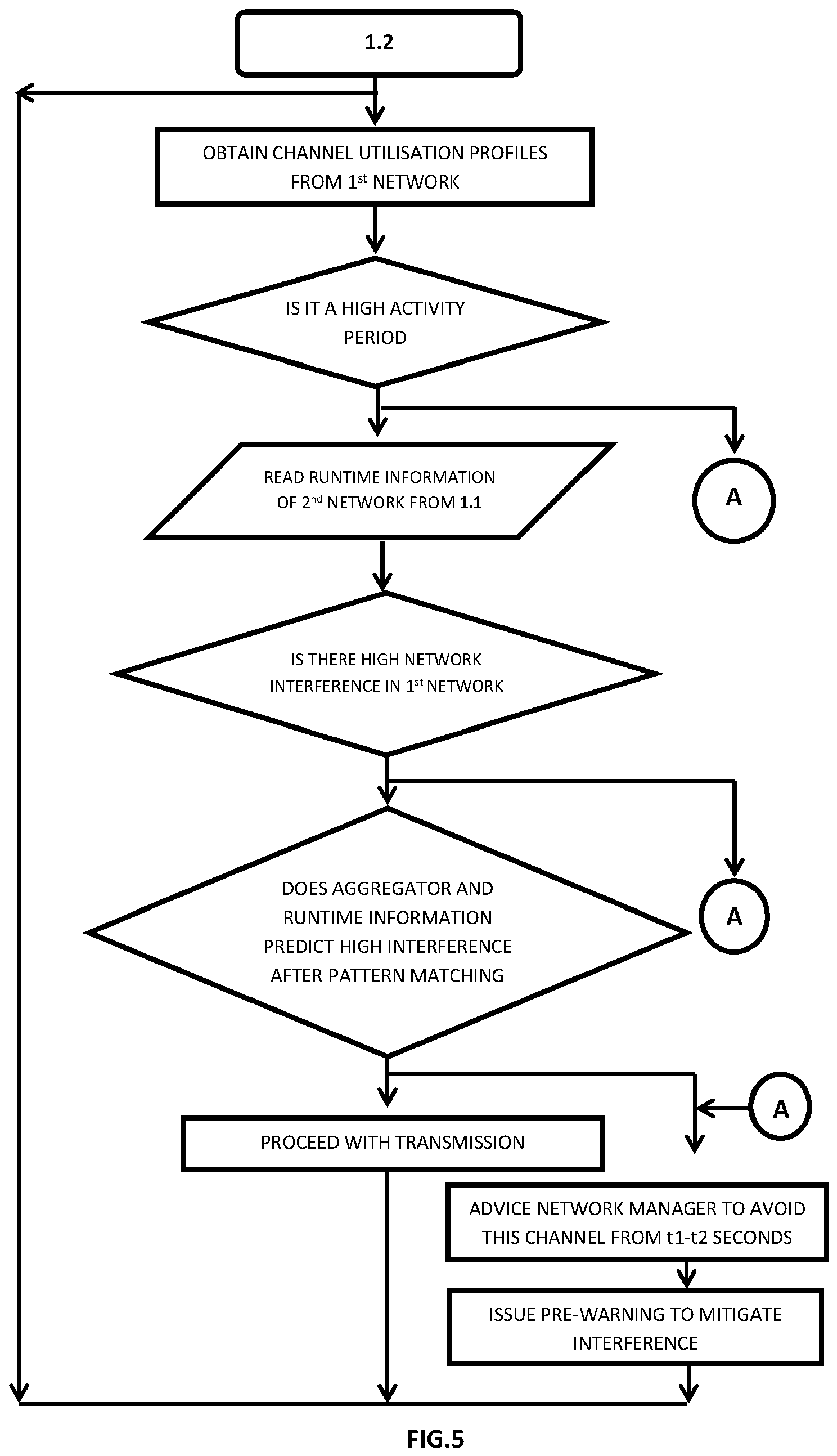 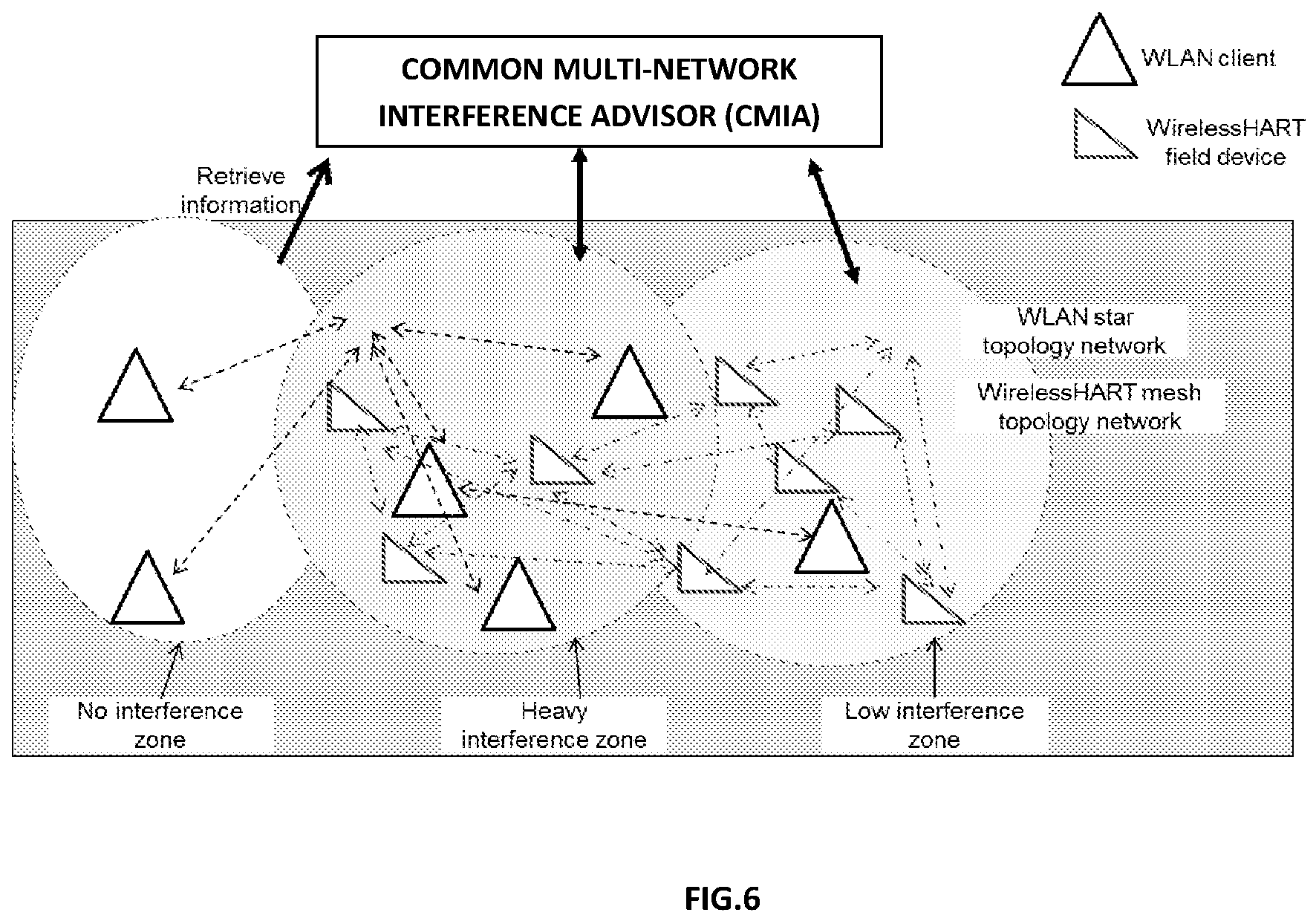 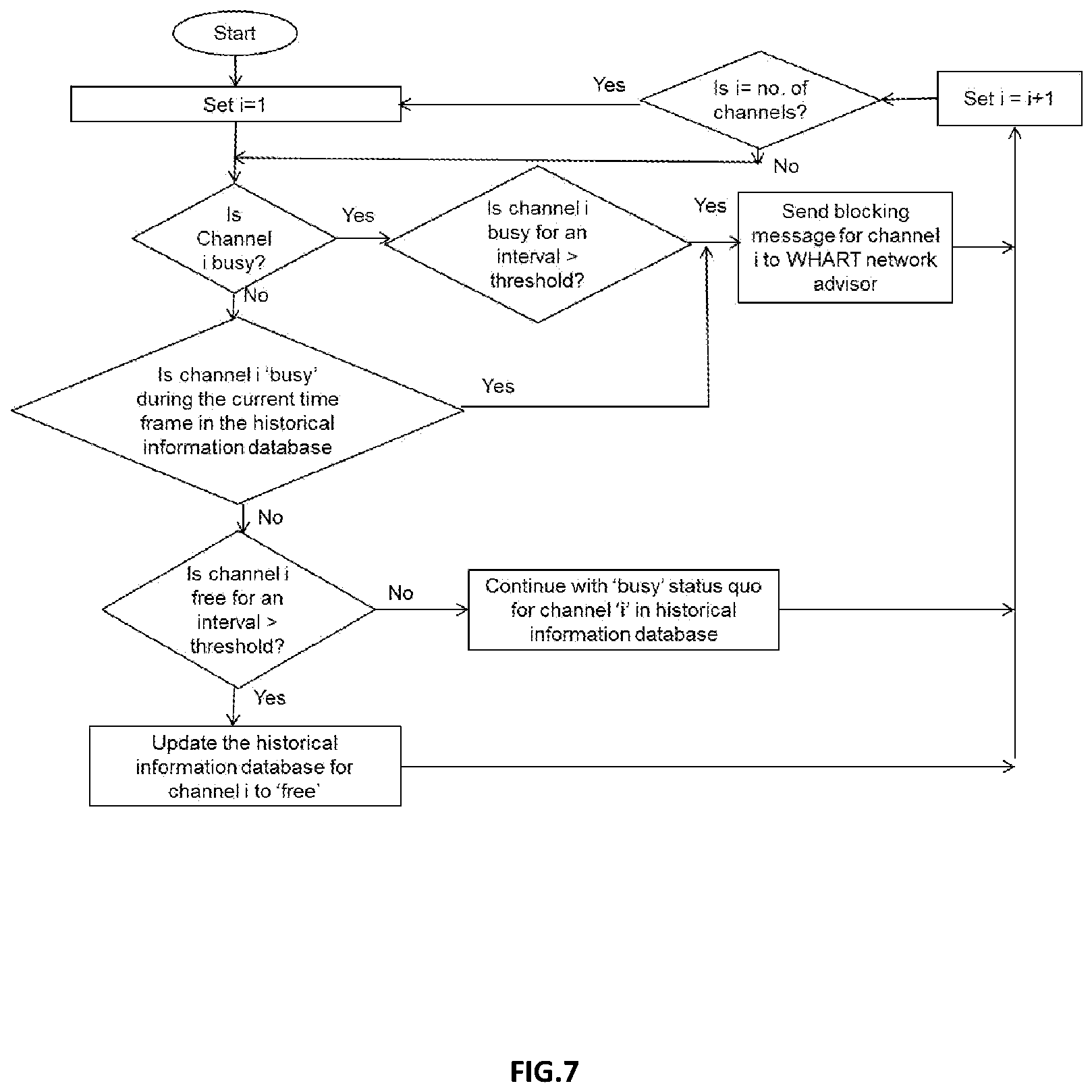 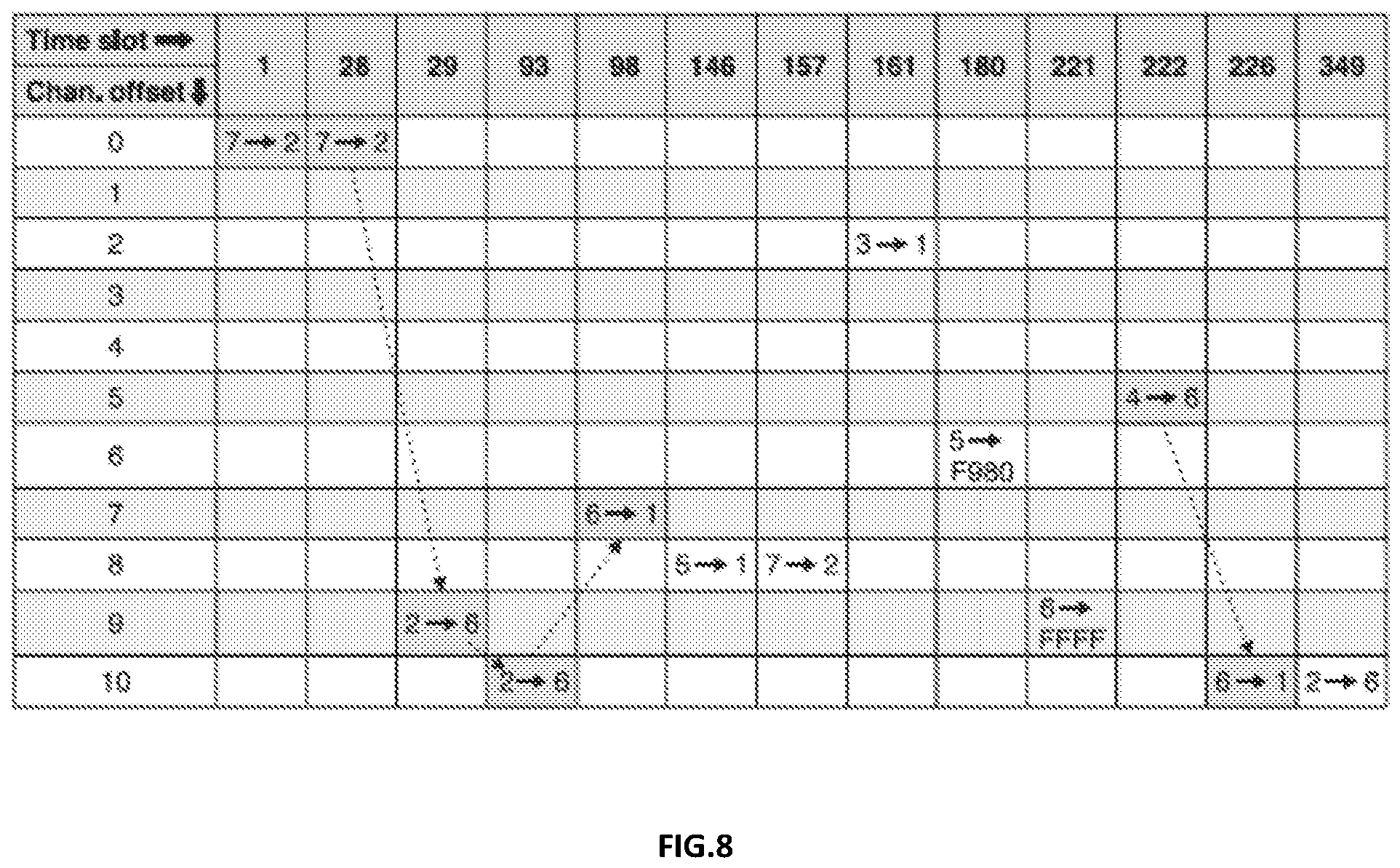