[0016] In another embodiment, the invention concerns a method of operating a non-transferred electric arc gas heater, characterized in that the heater is fed with a current of more than 500 A RMS, the current comprising a DC component and an AC component, the AC component having a peak to peak amplitude between 50 A and 20% of the DC component, and preferably between 50 A and 10% of the DC component.
[0017] The DC to DC converter is preferably a buck converter.
[0018] With respect to industrial applications, the potential U0 delivered by the AC to DC rectifier should preferably be above 3000 V, and the power delivered to the load be between 1 and 10 MW. Such a power supply is especially adapted for powering a non-transferred segmented plasma torch with hollow electrodes.
[0019] By U0 is meant the loaded output voltage (in Volt) of the AC to DC rectifier. While this voltage should be high enough to provide enough potential to sustain the electric arc at all conditions, it also increases the minimum required size of the ballast inductor.
[0020] By the switching frequency fs is meant the frequency (in Hertz) of the pulse-width modulated chopper used to regulate the current to the load.
[0021] By the latency τ of the control loop is meant the time interval (in second) between sampling the current and the subsequent control action. In case of a digital regulator, it includes the sampling and averaging of the current, the A/D conversion time, and the control loop calculations. The latency includes the delay imposed by the pulse-width modulator that is part of the DC tot DC conversion unit. A short latency is generally beneficial, allowing the use of a smaller ballast inductance.
[0022] We have found that for a high-power non-transferred non-segmented electric arc gas heater, the ballast inductor should have an inductance L (in Henry) of more than

[0023] The electric arc inside a plasma torch is particularly unstable on a timescale of about 10 to 100 µs. Within this timescale, the electric arc roots may move stochastically on the electrode surfaces. A varying current will further boost the wandering of the roots, thus spreading out the electrode wear and increasing the electrode lifetime. According to the invention, use is made of the current ripple generated in the chopper to enhance this effect.
[0024] In a DC to DC switching converter, the ripple is maximum when the duty cycle of the chopper amounts to 50%. In that particular case, the ripple can be expressed as

Neglecting secondary effects, the ripple varies as D (1 - D), D being the duty cycle of the chopper pulses.
[0025] Using conventional well filtered DC, we have learned that at average currents above 500 A, the electrode wear becomes too high for industrial purposes. On the other hand, the electrode erosion is surprisingly well spread if at least 50 A peak to peak of current ripple is superposed. This allows to reach average currents between 500 and 2000 A while avoiding premature electrode erosion. This contrasts with classical power supplies, designed to deliver a clean constant current output with low ripple. The constraint on the ballast inductor, assuming a typical duty cycle of 50%, and a ripple current of at least 50 A, can be determined as

This equation remains valid in practice for duty cycles between 20 and 80%, i.e. across the range of the practical operating conditions for industrial high power plasma's.
[0026] Figure 1 illustrates the invention. Are shown:
[0027] The following example illustrates an apparatus according to the invention. A 4 MW power supply comprises a rectifying unit delivering a voltage under nominal load of 3000 V (U0), and a chopper unit equipped with IGBT switching devices operating at 2 kHz (fs).
[0028] A ballast inductor is placed in series with an electric arc heater having a nominal power rating of 2.5 MW. The current to the load is measured using a Hall-probe and the value is fed to a PID regulator. A current set-point of 1000 A is chosen, which, for this particular torch, corresponds to a potential of about 1450 V. The duty cycle (D) of the chopper is thus about 48%.
[0029] The digital PID regulator induces a delay of 1 ms, and the chopper adds a further mean delay of 0.5 ms. A control loop latency of 1.5 ms (τ) is thus considered. According to the invention, a minimum inductance of 3 mH is needed to ensure the stability of the control loop.
[0030] The maximum inductance is calculated according to the invention as 7.5 mH. This indeed ensures the desired peak to peak current ripple of 50 A.
[0031] To maximize electrode lifetime and power supply robustness, a value of 4 mH is chosen for this specific installation.

- a ballast inductor (3) having an inductance L;

characterized in that inductance L is such that

2. A DC power supply according to claim 1, characterized in that the DC to DC converter (2, 3, 4) is a buck converter.

4. A DC power supply according to any one of claims 1 to 3, characterized in that the power delivered to the gas heater (9) is between 1 and 10 MW.

5. A DC power supply according to any one of claims 1 to 4, characterized in that the electric gas heater (9) is a non-transferred segmented plasma torch with hollow electrodes.

6. Method of operating a non-transferred electric arc gas heater using a DC power supply according to any one of claims 1 to 5, characterized in that the heater (9) is fed with a current of more than 500 A RMS, the current comprising a DC component and an AC component, the AC component having a peak to peak amplitude between 50 A and 20% of the DC component. 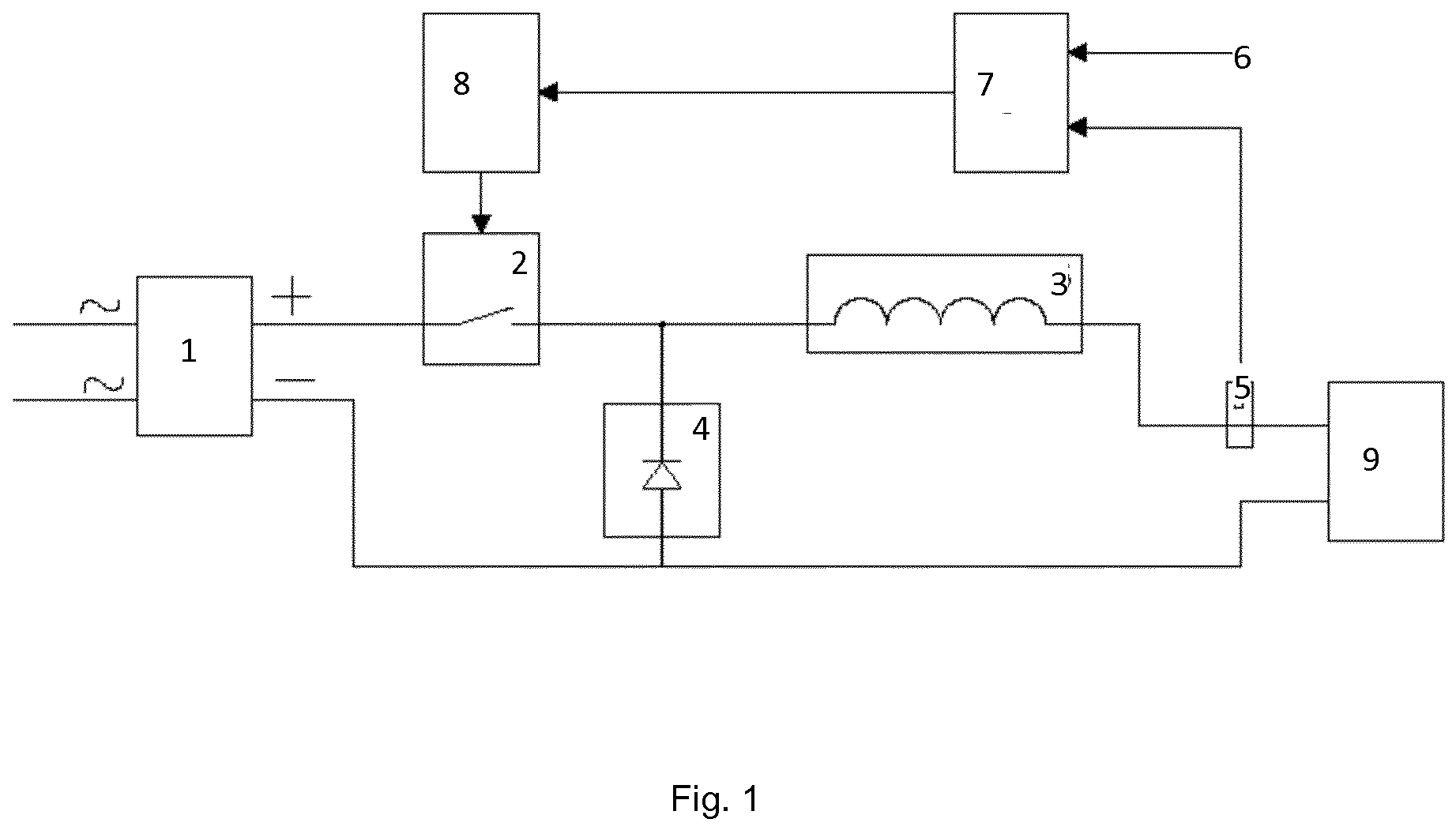