[0001] One or more implementations relate generally to power output control and compensation for AC coupled systems.

[0002] Multiple distributed energy resources (DERs) are often deployed together at a single location in order to provide added system reliability, increased power capacity, or storage. An energy management system (EMS) coordinates power flow between various DERs, loads, and a power grid. The EMS may communicate with DERs throughout the power system and individually control the DERs to manage power flow and respond to varying grid conditions and external dispatch commands.
[0003] A common DER system implementation includes a solar photovoltaic (PV) generator connected with a battery energy storage system (BESS) and loads. The energy storage capability of the BESS supplements the intermittent power produced by the PV generator and provides additional capabilities such as demand response and peak shifting.
[0004] DERs may use modular designs with various types, sizes, and functions. It may be difficult or impractical to design products (e.g., PV inverters, battery systems, etc.) to manage the power flow through so many different combinations of configurable DER systems. This necessitates the use of an EMS to manage the aggregated DER system; however, the EMS used in the DER system is also hindered by communication latency, limiting the speed commands can be executed. Using the EMS for power flow control also means that any system or communication failure may compromise electrical system functionality. WO 2014/147294 A1 relates to compensating non-active currents in electrical power networks. US 2001/004170 A1 relates to a step wave power converter. US 2004/021445 A1 relates to power slope targeting for DC generators.

[0005] The included drawings are for illustrative purposes and serve to provide examples of possible structures and operations for the disclosed inventive systems, apparatus, methods and computer-readable storage media.

Figure 2 shows an example DER system that uses a power output control and compensation (PCC) circuit for control of a photovoltaic (PV) system.

Figure 4 shows an alternative version of the DER system that uses a PCC circuit for control of a PV system.

Figure 6 shows a process performed by a PCC circuit.

[0006] A power output control and compensation (PCC) circuit operates within a distributed energy resource (DER) system. The PCC circuit is located in a battery power conversion system (PCS) and includes an input terminal to connect with a photovoltaic (PV) power system and an output terminal to connect with an electrical panel or load. A current sensing device (e.g., shunt resistor or current transducer) is coupled between the input and the output terminals to measure a power level of the PV system. A relay is coupled between the current sensing device and the output terminal and a processor selectively connects power from the PV system to the electrical panel or the load based on the measured PV power level or based on other power measurements within the DER system. PCS-control of multiple power sources decreases cycle times for controlling DERs. The present invention provides an apparatus according to claim 1. Optional features are defined in the dependent claims. The invention is set out in the appended set of claims.
[0007] FIG. 1 shows a known DER system configuration. In one example, a PV array 52 connects through a PV inverter 56 to an electrical panel 62. A battery system 54 may connect to electrical panel 62 through PCS 60. Electrical panel 62 may supply power from PV array 52 and battery system 54 to different local loads 66 and/or to a power grid 64.
[0008] PV array 52 may be any type of device capable of converting solar energy into electrical energy. In one example, PV inverter may convert direct current (DC) power from PV array 52 into alternating current (AC) power for different local AC loads 66 and/or other remote AC devices connected to power grid 64. PCS 60 also may charge battery system 54 using power supplied by PV array 52 or power grid 64 and also may convert stored DC energy in battery system 54 into AC power for powering local loads 66 and exporting power to the power grid 64.
[0009] DER system 50 may use energy management system (EMS) 58 to coordinate power flow between PV array 52, battery system 54, local loads 66, and power grid 64. EMS 58 may communicate with other energy sources throughout the power system, manage power flow within DER 50, and respond to varying grid conditions or dispatch commands.
[0010] Battery system 54 typically relies on three main components that interact with each other. These include a battery management system (BMS) 57, PCS 60, and EMS 58. BMS 57 monitors the state and condition of battery 55 and provides protection against unsafe operating states (e.g., high battery cell temperatures). BMS 57 also provides handshaking and information transfer with other power components. Battery 55 can be a single battery or multiple batteries combined within battery system 54.
[0011] PCS 60 is a linking element that enables power transfer between battery 55 and loads 66 connected to electrical panel 62. PCS 60 is designed to convert DC power from battery 55 into AC power which may be used to power local loads 66 or to export to the power grid 64. PCS 60 may be bidirectional to convert AC power from power grid 64 and/or PV array 52 into DC power for charging battery 55.
[0012] EMS 58 coordinates power flow between power grid 64, battery 55, local loads 66, and PV array 52. EMS 58 may implement algorithms to manage battery charging and discharging based upon electricity price structures such as time-of-use metering or demand charging.
[0013] PCS 60 may act as a bridge between BMS 57 and EMS 58. PCS 60 converts power demand signals from EMS 58 into real power flow between the power converter and battery 55. As a result, PCS 60 is uniquely equipped to collect detailed information about battery system 54 in real-time. PCS 60 also has access to physical and operational parameters that would not otherwise be conveyed to EMS 58. For example, PCS 60 may communicate battery temperature, instantaneous power, and state of charge to EMS 58.
[0014] Battery 55 in battery system 54 may store energy output from PV array 52. A digital signal processor (DSP) 118 operating within PCS 60 may measure current and/or voltage data from both battery system 54 and PV system 51 and perform primary PCS functions in PCS 60, such as power measurements, control, and inverter system switching.
[0015] As described above, some EMSs 58 are hindered by communication latency (often several hundred milliseconds or greater), which limits the speed at which commands can be executed throughout DER system 50. Reliance on EMS 58 for all power flow control also means any system failure or communication issue may compromise electrical system functionality.

[0016] Battery 55 in battery system 54 may store energy output from PV array 52. As a result, some of the functionality for the interaction between battery system 54 and PV array 52 may be incorporated into PCS 60. Since PCS 60 controls power flow between battery system 54 and the rest of DER system 50, a PCS-based output control and compensation circuit (PCC) 102 is used in PCS 60 to also control PV/battery interactions.
[0017] FIG. 2 shows a DER 100 that uses a PCS-based PCC102. FIG. 3 shows PCC 102 in more detail. Referring to FIGS. 2 and 3, one leg 104 (either the line or neutral conductor) of an AC output from PV inverter 56 is connected to PCS 60 through an independent terminal 106 (referred to as IN). In one example, a single line or neutral conductor from the PV inverter 56 connected through PCC 102 to electrical panel 62. The other line or neutral conductor is connected directly to electrical panel 62. In one implementation of a grid-interactive battery product, PCC 102 is located on an external circuit board that can be accessed by installers or maintenance personnel.
[0018] Power from PV inverter 56 is routed from terminal 106 through a current sensing device 110, such as a current transducer, and then through a relay 112 rated to break the PV current. An output terminal 114 is alternatively referred to as OUT. Power from PV inverter 56 is routed through output terminal 114 to electrical panel 62, which also receives the power from the PCS 60 through circuit branch 108. The electrical panel contains the protection circuitry (e.g., fuse or circuit breaker for the PV inverter 56 output circuit loop. Electrical panel 62 then interfaces with power grid 64 and local loads 66 as described above. Circuit branch 108 separately carries PCS current that is combined with the PV current from OUT 114 after reaching electrical panel 62 and being routed through the protection circuitry.
[0019] An optional terminal 116 is referred to as MID and is placed between current sensor 110 and relay 112 to enable only the current sensing capability. MID 116 may divert PV power through the current sensing device 110 before routing PV power to electrical panel 62. In this example, MID may operate as OUT 114 in FIG. 2.
[0020] PCC 102 may operate independently from the remainder of the power circuitry in PCS 60. Only a single cable 104 (line or neutral) from PV inverter 56 needs to be routed to PCS 60, thus minimizing the number of terminals and simplifying cable management.
[0021] A digital signal processor (DSP) 118 measures PV current from current sensor 110 and controls relay 112. DSP 118 may receive current data from both battery system 54 and PV system 51 and perform other primary functions in PCS 60, such as power measurements, control, and inverter system switching. In this way, PCC 102 may execute some control over PV inverter 56 via power disconnection through relay 112.
[0022] One feature of PCC 102 enables PCS 60 to control different power operations within DER system 100 rather than relying on the EMS 58. For example, DSP 118 may adjust the discharge current from battery system 54 to maintain consistent total cumulative power delivery by the combination of PV system 51 and battery storage system 54.
[0023] In one configuration, battery power output from battery system 54 is controlled according to the following equation:

a power conversion system, PCS; and

a power control and compensation, PCC, circuit (102) configured to operate with the PCS (60), the PCS being configured to control the conversion between direct current, DC, power for a battery system (54) and alternating current, AC, power based on power command signals from an energy management system, EMS, (58) that controls the PCS and coordinates power flow between a power system (51) and an electrical panel (62) or a load (66) connected to the electrical panel, and the PCC circuit including:

an input terminal (106) to connect with an output from the power system;

a relay (112) coupled between the input terminal and the output terminal;

a current measurement device (110) coupled between the input and output terminal of the PCC configured to measure the power level from the power system; and

monitor a power state delivered by a photovoltaic, PV, power source; and 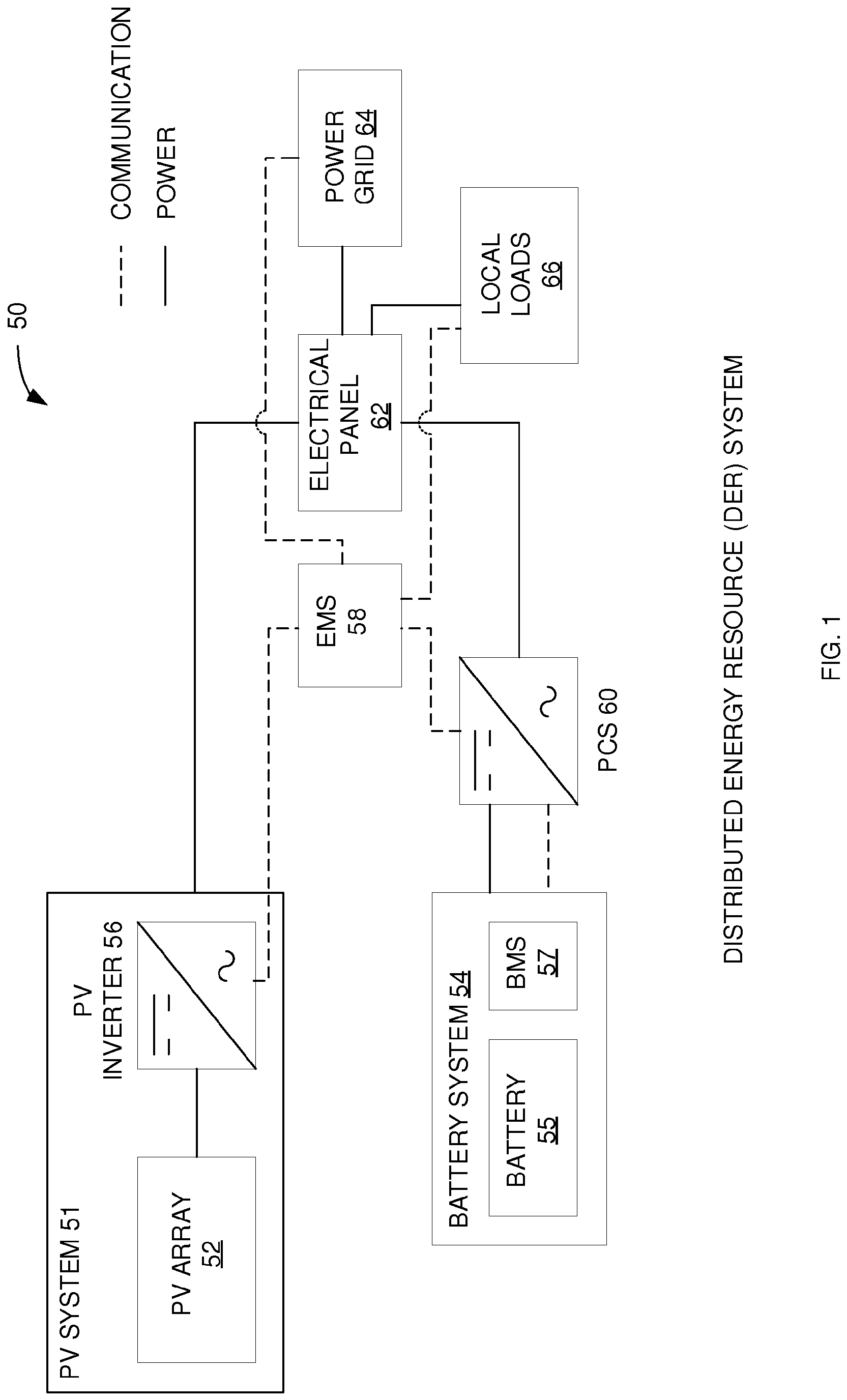 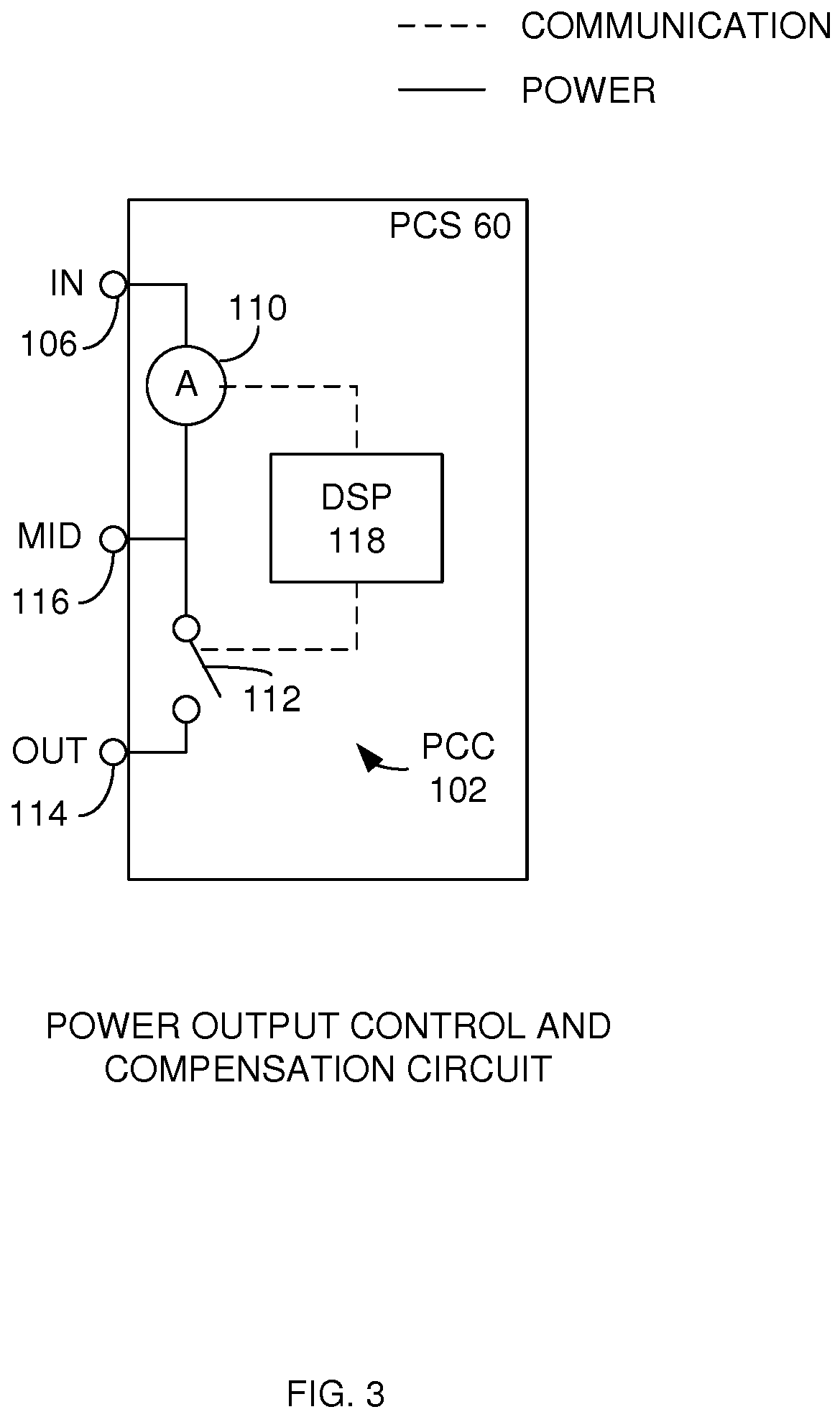 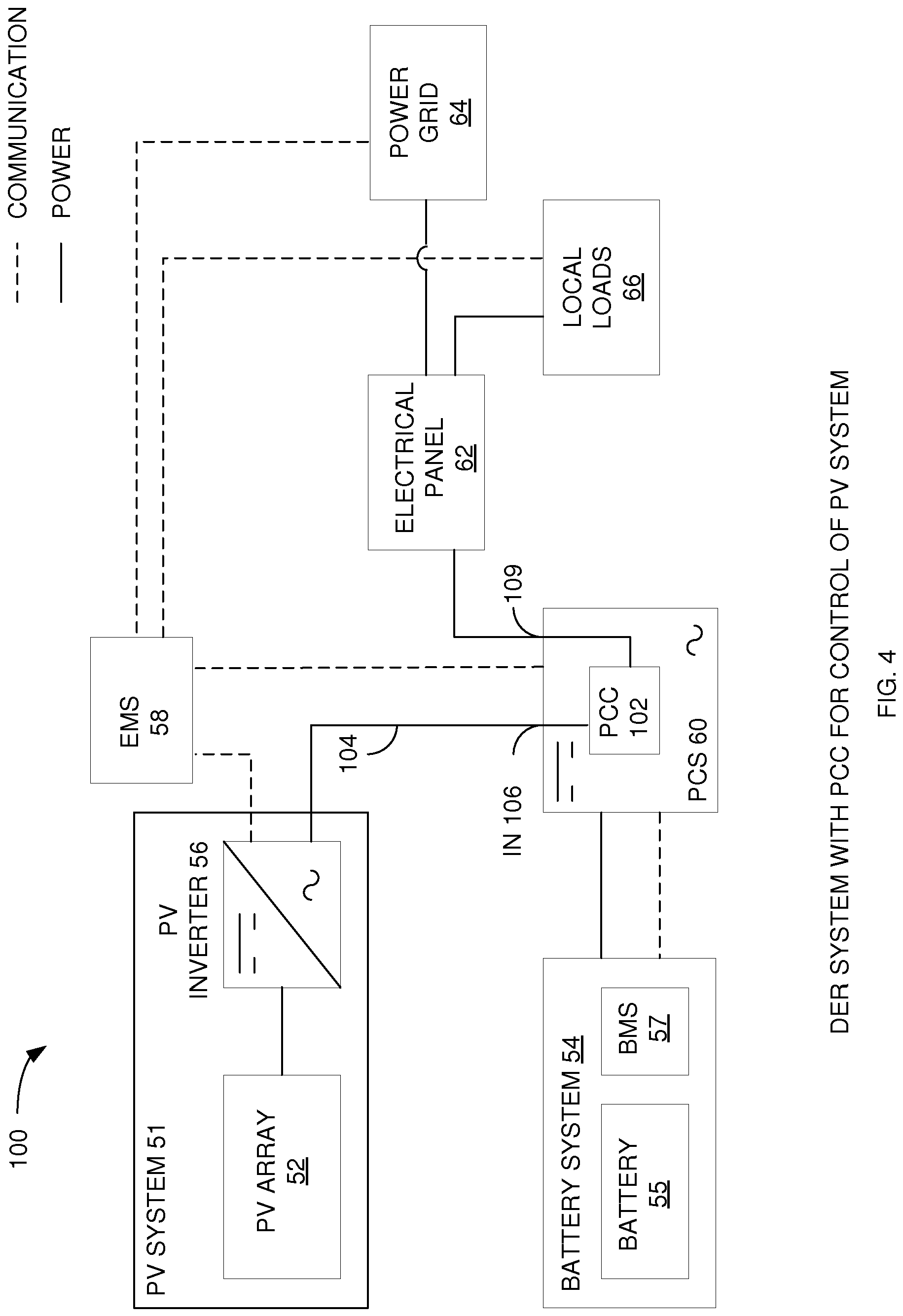 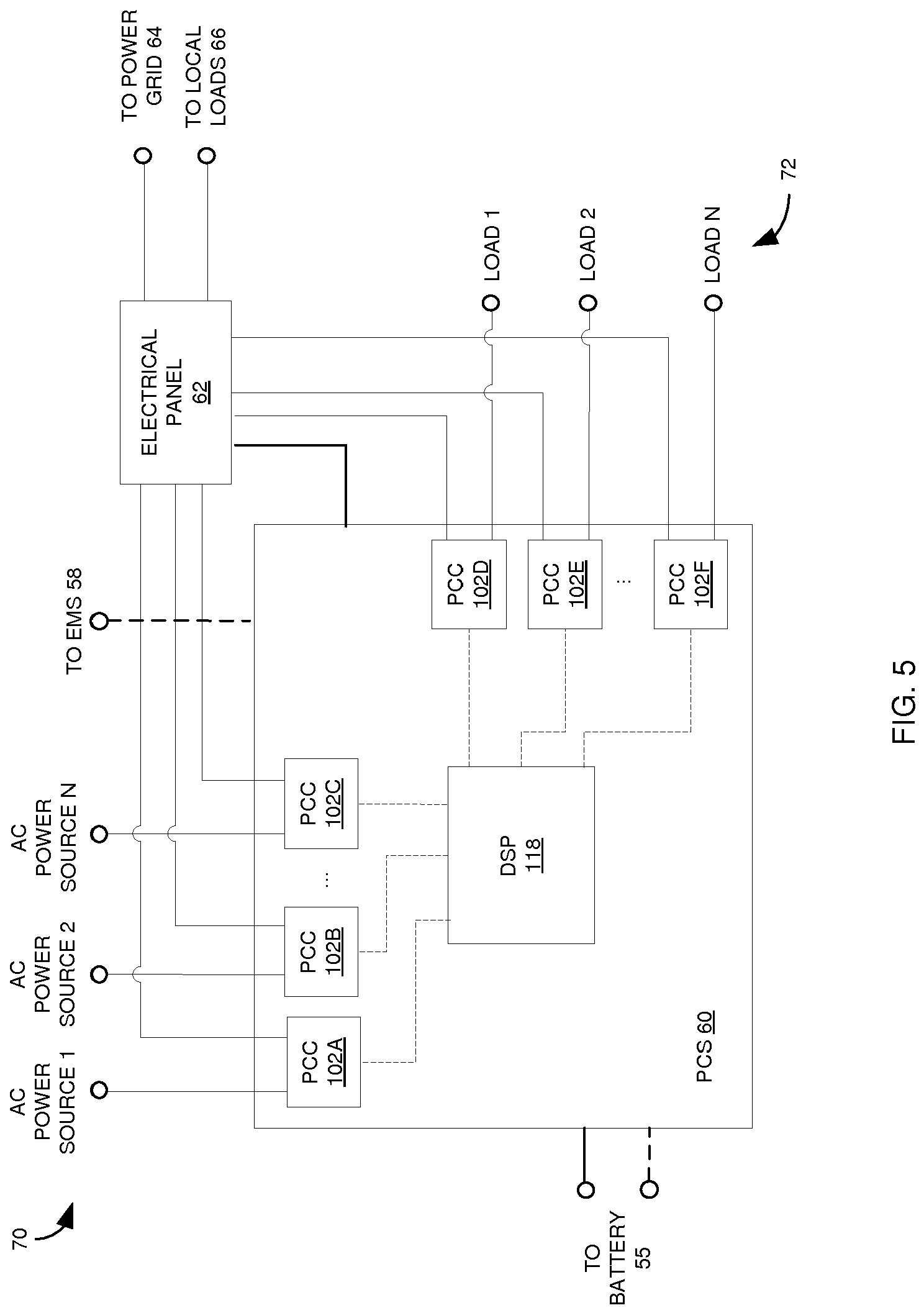 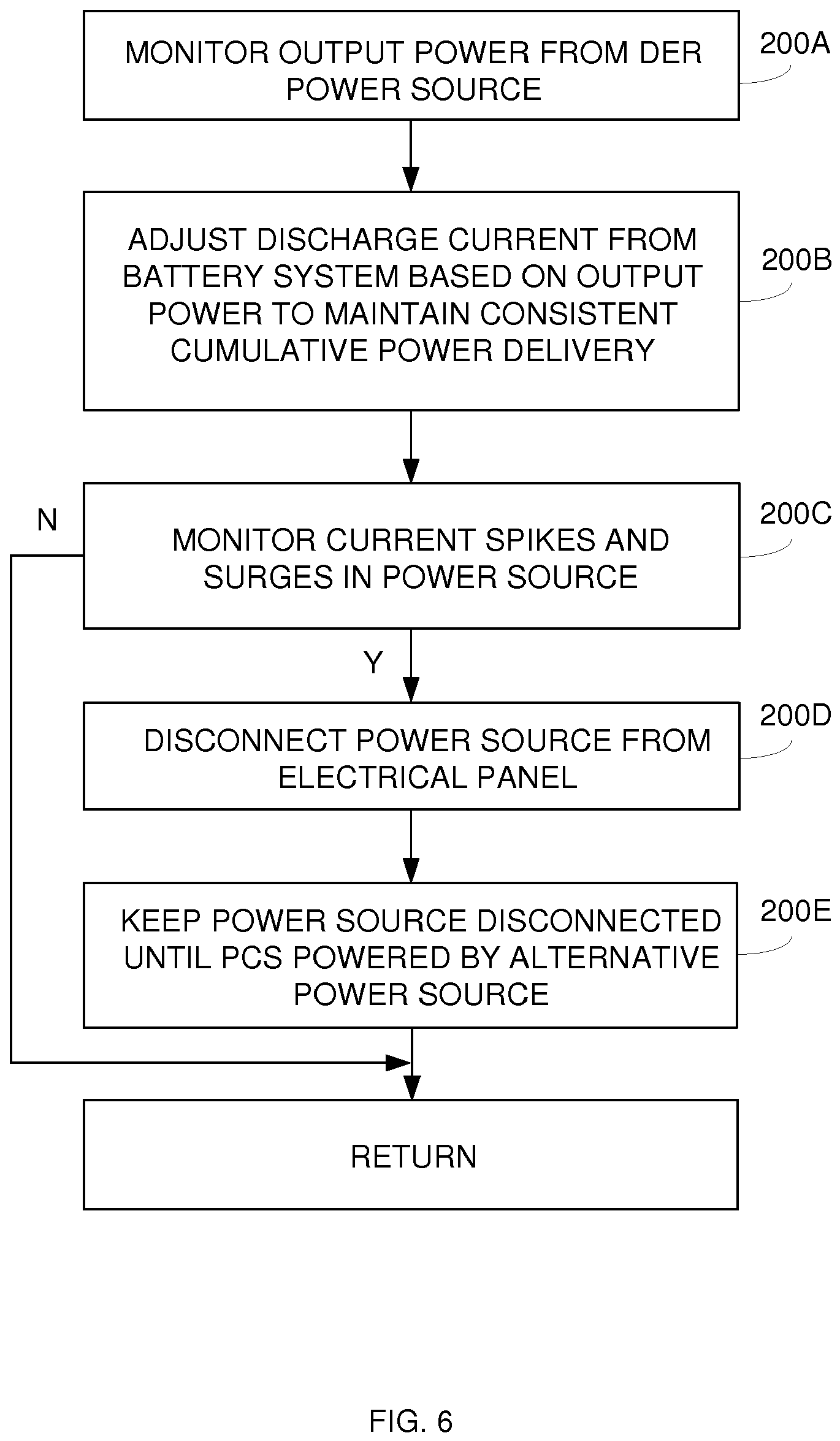 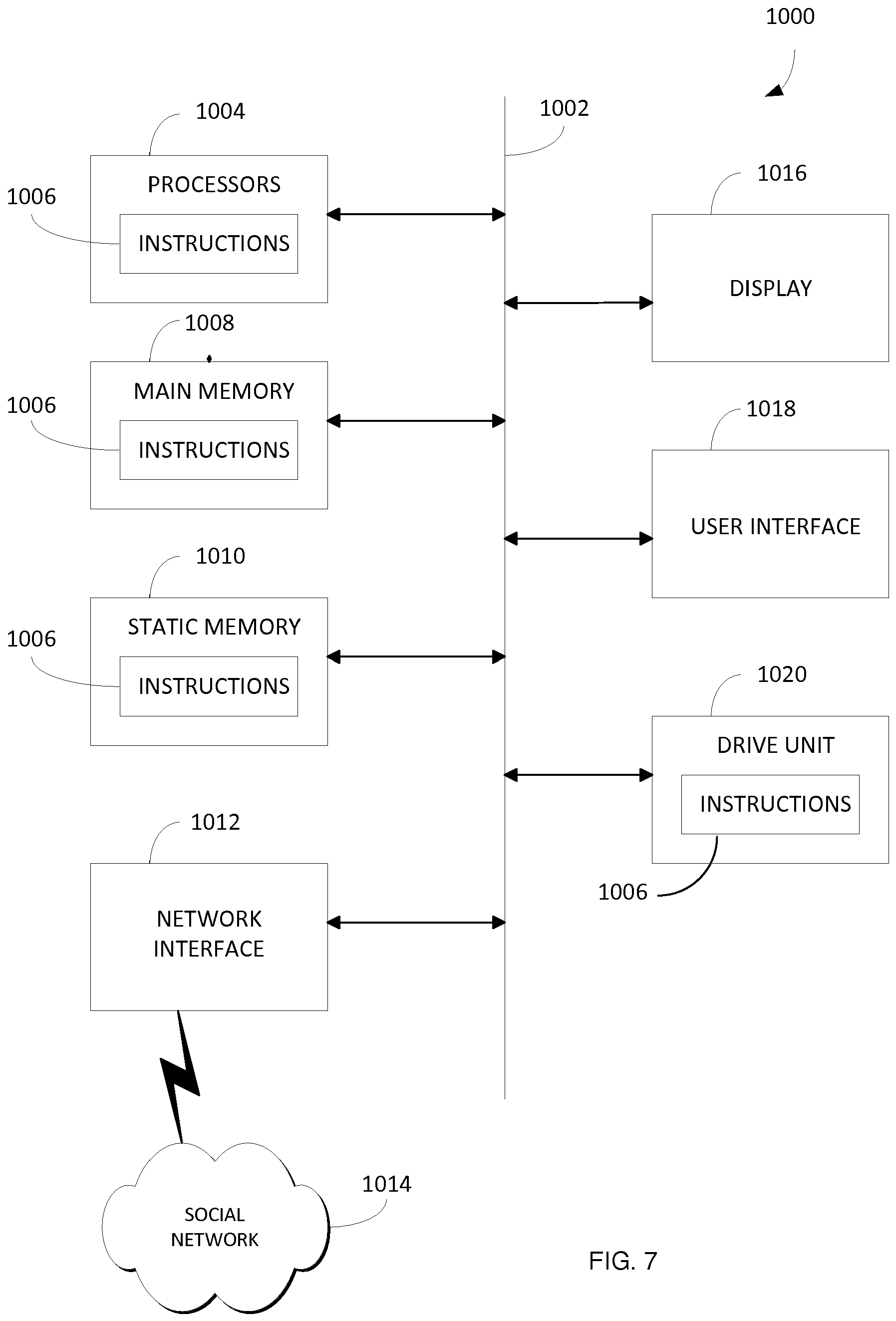