[0001] The present disclosure relates to methods for joining two steel blanks according to the preamble of claim 1 (see, for example, EP2737971).

[0002] The demand for weight reduction in e.g. the automotive industry has led to the development and implementation of lightweight materials, manufacturing processes and tools. The growing concern for occupant safety also has led to the adoption of materials which improve the integrity of the vehicle during a crash while also improving the energy absorption. In that sense, vehicle parts made of high-strength and ultra-high-strength steel (UHSS) are often employed in order to satisfy criteria for lightweight construction.
[0003] Ultra-high-strength steels (UHSS) exhibit an optimized maximal strength per weight unit and advantageous formability properties. These steels are designed to attain a microstructure after heat treatment, which confers good mechanical properties and makes them especially suited for the hot stamping process typically used to form steel blanks into particular automobile parts. Some hot stamping processes use boron steel sheets to create stamped components with UHSS properties, with tensile strengths up to 1,500 MPa. The increase in strength as compared to other material allows for a thinner gauge material to be used, which results in weight savings over conventionally cold stamped mild steel components.
[0004] Typical vehicle components that can be made from UHSS using hot stamping include: door beams, bumper beams, cross/side members, A/B pillar reinforcements, and waist rail reinforcements.
[0005] In a further attempt to minimize the weight of components while respecting structural requirements, so-called "tailored blank" techniques may be used. In these techniques, components may be made from a composite metal blank which is obtained by welding "edge to edge" several blanks with different thicknesses, size and properties. At least theoretically, using this kind of technique the use of material may further be optimized. Blanks of different thickness may be joint or a steel blank may be joint with a coated steel blank for example, using the specific properties of each material where they are needed.
[0006] Similarly "patchwork" blanks are known, in which several blanks are not necessarily welded "edge-to-edge", but instead partial or complete overlaps of blanks may be used.
[0007] Since during the hot stamping process the blanks are subjected to aggressive atmospheres, the steel is usually coated to avoid corrosion, oxidation, decarburization and scale formation. 22MnB5 steel is usually presented with an aluminum-silicon coating. For example, Usibor ® 1500P, commercially available from Arcelor, are boron alloyed steels coated with an aluminum-silicon (AISi) coating and are examples of steels normally used in tailored and patchwork blanks.
[0008] Usibor ® 1500P is supplied in ferritic-perlitic phase. It is a fine grain structure distributed in a homogenous pattern. The mechanical properties are related to this structure. After heating, a hot stamping process, and subsequent quenching, a martensite microstructure is created. As a result, maximal strength and yield strength increase noticeably.
[0009] The composition of Usibor is summarized below in weight percentages (rest is iron (Fe) and impurities):
[0010] As mentioned before, Usibor 1500 is supplied with an aluminum-silicon (AISi) coating in order to prevent corrosion and oxidation damage. However, this coating has a significant downside related to its weld behavior. If Usibor blanks are welded without any further measures, aluminum of the coating may enter into the weld area and this can cause an important reduction of the mechanical properties of the resulting component and increase the possibility of weak fracture in the weld zone.
[0011] In order to avoid or at least minimize this effect, it is known to remove part (or the whole) of the coating in an area close to the welding gap by laser ablation. However, this represents an additional step in the manufacturing process of a (tailored) blank and a vehicle component. Furthermore, this additional step requires a complex quality process with an elevated number of parts which are to be scrapped. This entails an increase of the cost of the welding step and limits the competitiveness of the technology in the industry.
[0012] Herein a blank may be regarded as an article which has yet to undergo one or more processing steps (e.g. deformation, machining, surface treatment or other). These articles may be substantially flat plates or have more complicated shapes.
[0013] DE102007028956 describes a method and apparatus for approximately horizontal welds with a welding gap.
[0014] EP2737971 describes tailor welded blanks being manufactured by connecting blanks of different materials or thickness, manufacturing methods thereof and hot stamped components using the same.
[0015] There is thus a need for methods of joining steel blanks having at least a layer of aluminum or of an aluminum alloy in which aforementioned disadvantages are avoided or at least partially reduced.

[0016] In a first aspect, the disclosure provides a method for joining a first steel blank and a second steel blank wherein at least one of the first and second blanks comprises a layer of aluminum or of an aluminum alloy. The method comprises providing a support for each steel blank, the supports being made of a magnetic material and being arranged distanced apart by a central space provided between them. A coil winding is provided around at least one of the supports. The method further comprises arranging the first blank on one support and the second blank on the other support, such that a butt end of the first blank that is facing the second blank is brought into contact with a butt end of the second blank that is facing the first blank defining a contacting area that closes a path for magnetic flux between the supports and through the first and second blanks when in use, and providing a laser system, wherein the laser system comprises one or more optical elements and a laser source for generating a laser beam. And the method further comprises applying a laser beam onto the contacting area using the laser system, while applying an alternating current to the coil winding, such that an alternating magnetic field is created across the contacting area in a direction substantially from one blank to the other.
[0017] According to this aspect, by bringing the steel blanks in contact which are arranged on supports made of magnetic material (and arranged spaced apart), a potential path for magnetic flux is closed between the supports across the blanks. By applying alternating current to the coil winding an alternating magnetic field can be provoked in the support which traverses the steel blanks. The strength of the magnetic field is increased due to the winding of the coil around the magnetic support. The magnetic field applies or may be applied across the width of the blanks.
[0018] When the alternating magnetic field is applied simultaneously with the laser beam, the magnetic field traverses the blanks (across the width of the blanks, not moving along with the laser) when part of the blank (the contacting area) is in a liquid phase. The magnetic field may thus be considered substantially in-line with the blanks, when the blanks are substantially flat.
[0019] In general, the laser may be aimed substantially perpendicular to the blanks. The alternating magnetic field may thus generally be substantially perpendicular to the laser.
[0020] The presence of an alternate magnetic field in a liquid phase of a magnetic material involves reorganization of magnetic particles present in the liquid phase while non-magnetic particles do not notice any change. The strength of the alternating magnetic field may be such that it drags the magnetic particles. Or put in other words, the magnetic particles can be in continuing transverse rearrangement. On the contrary, non-magnetic particles are substantially indifferent to the alternating magnetic field thus remain still and fall by gravity. Aluminum particles which are substantially non-magnetic particles are thus removed or at least partially removed from the contacting area thus enhancing mechanical properties of the welding.
[0021] There is thus no need to remove an aluminum or aluminum alloy layer, such as was proposed in some prior art methods when e.g. coated steel blanks are to be welded. This leads to quicker and cheaper manufacturing process since an intermediate process step is not necessary anymore.
[0022] Aluminum alloys are herein to be understood as metal alloys in which aluminum is the predominant element.
[0023] In some examples, the first blank and/or the second blank may be made from a boron alloyed steel coated with aluminum silicon, e.g. Usibor blanks.
[0024] The methods hereinbefore described may be used for forming e.g. tailored blanks, by butt joining two blanks. One of the blanks or both blanks may comprise a steel substrate with a coating comprising a layer of aluminum or an aluminum alloy. In particular an AISi coating may be used. Other examples include the use of Ductibor blanks.

[0025] Non-limiting examples of the present disclosure will be described in the following with reference to the appended drawings, in which:

Figure 1 schematically illustrates a tool for joining a first and a second steel blanks according to an example;

Figures 2a - 2b show another example of a tooling for joining steel blanks with aluminium layer;

Figures 3a - 3b show a further example of a tooling for joining steel blanks with aluminium layer;

Figures 4a - 4b show a still further example of a tooling for joining steel blanks with aluminium layer; and

Figures 5a - 5b show yet another example of tooling for joining steel blanks with aluminium layer.

1. A method for joining a first steel blank and a second steel blank, at least one of the first and second blanks comprising a layer of aluminum or of an aluminum alloy, the method being characterised by

- providing a support for each steel blank, the supports being made of a magnetic material and being arranged distanced apart by a central space provided between them,

- providing a coil winding around one or more supports,

applying a laser beam onto the contacting area using the laser system, while

- applying an alternating current to the coil winding such that an alternating magnetic field is created across the contacting area in a direction substantially from one blank to the other.

2. The method of claim 1, wherein the first blank and/or the second blanks is made from a boron alloyed steel coated with aluminum silicon.

3. The method of any of claims 1 - 2, wherein each support is at least partially surrounded by a coil winding and the alternating current applied to each coil winding is such that the generated alternating magnetic fields are inverted.

5. The method of any of claims 1 - 4, wherein a collector plate is provided in the central space for collecting aluminum particles.

7. The method of any of claims 1 - 6, wherein the laser system is arranged such that the laser beam impacts substantially perpendicular to the blanks.

9. The method of claim 8, wherein welding comprises welding with an Nd-YAG laser.

10. A method for forming a product comprising

forming a blank including a method of joining a first and a second steel blanks according to any of the methods of claims 1 - 9,

heating the blank, and

hot deforming and subsequent quenching of the heated blank. 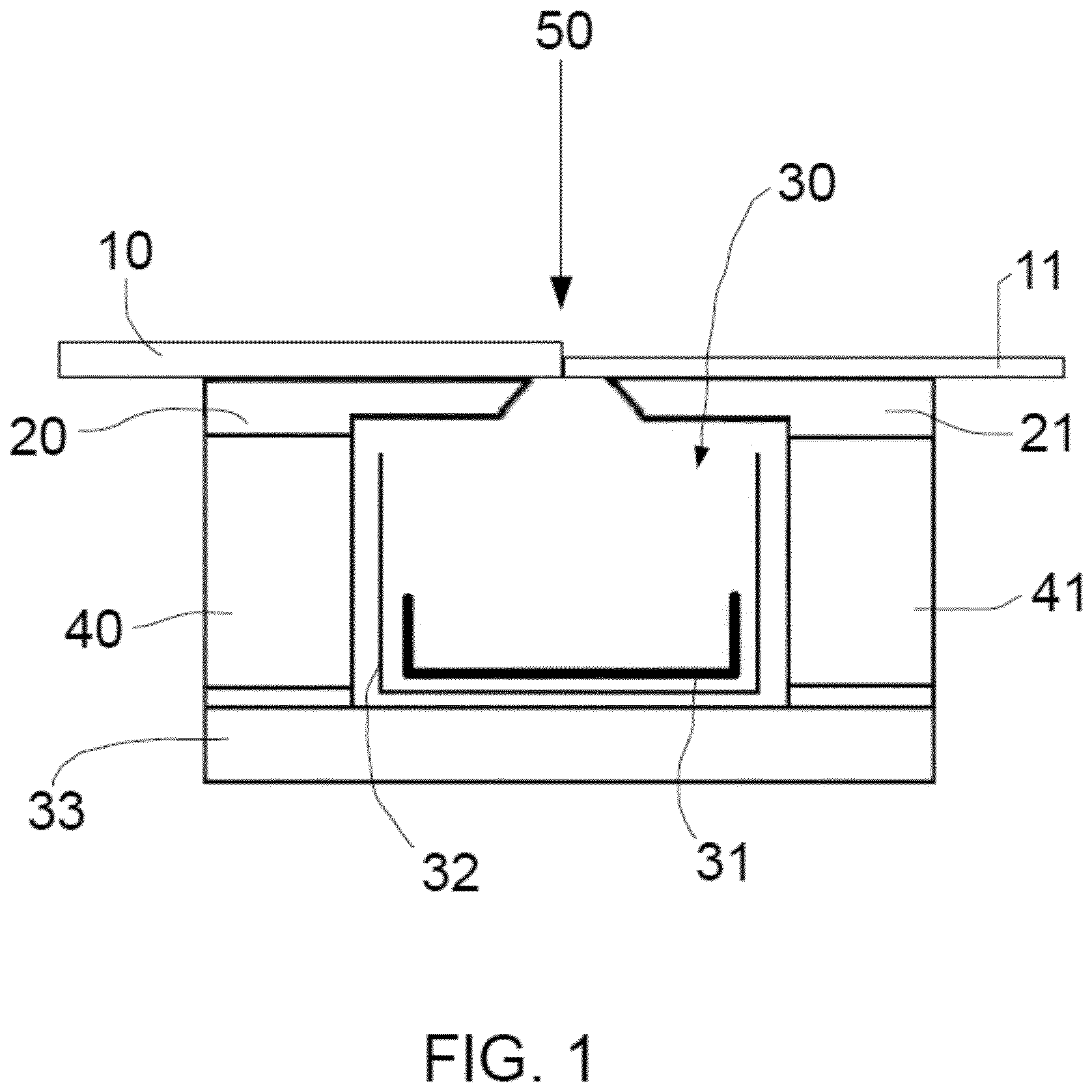 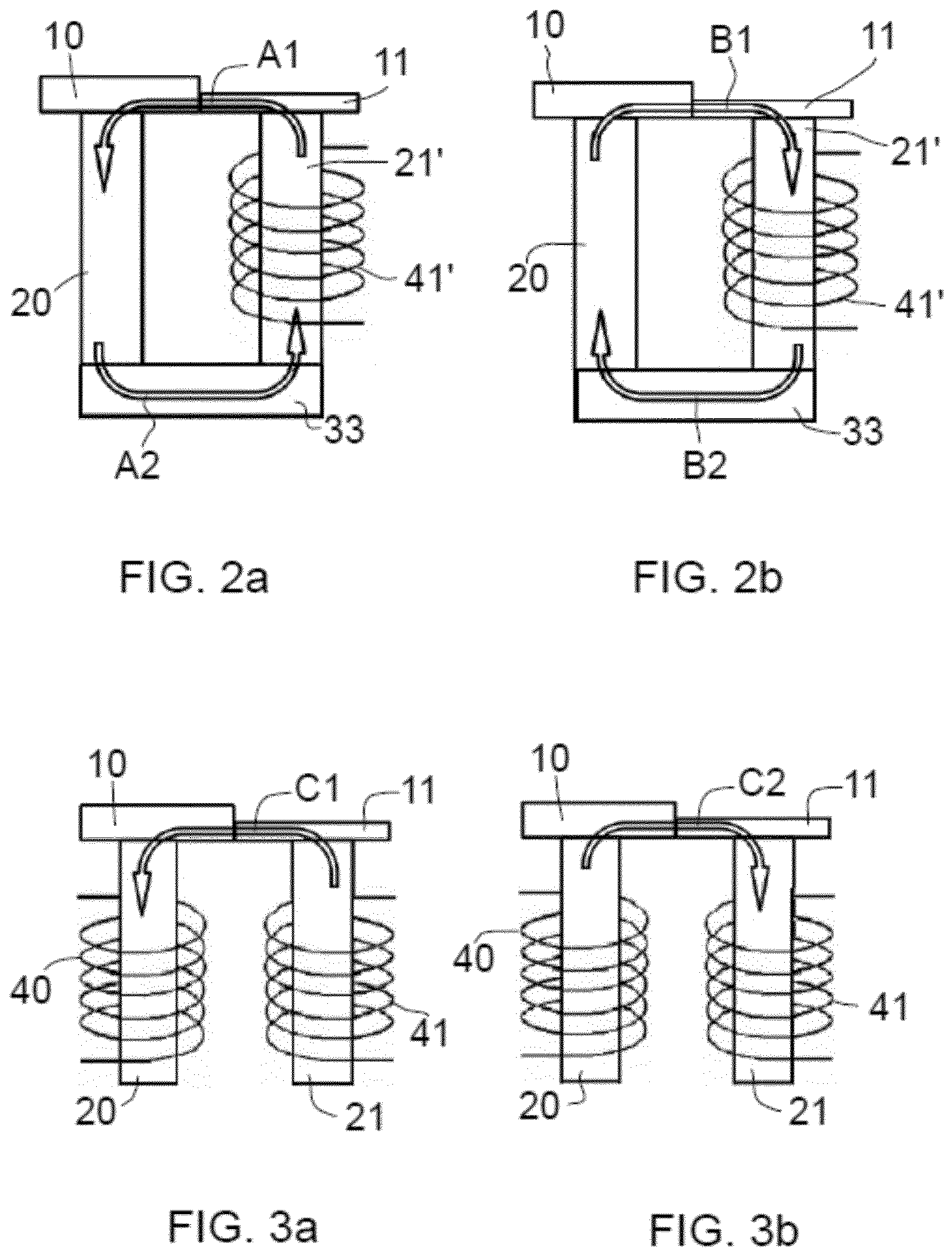 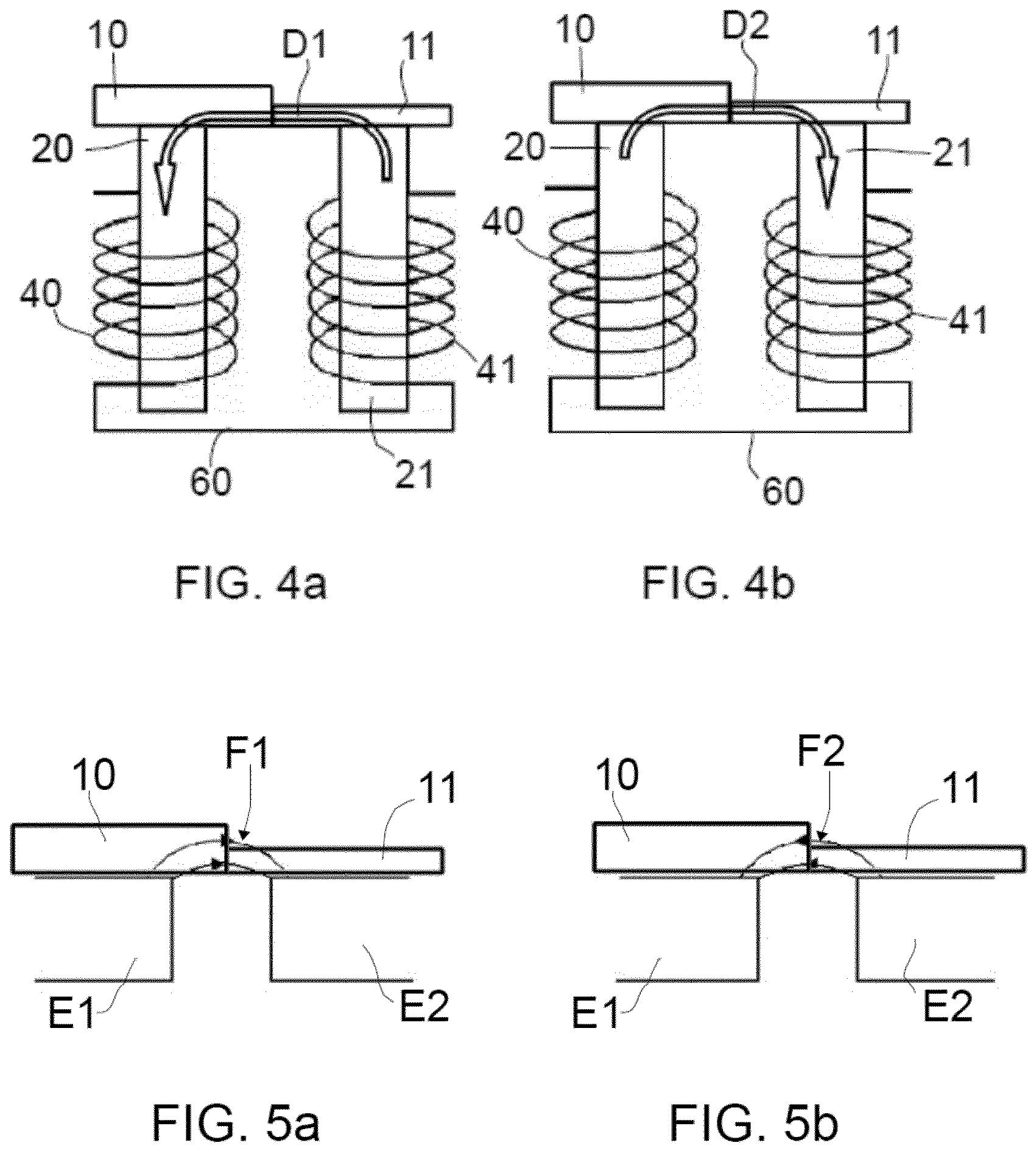