[0002] Ultrasonic based consumption meters for calculating a consumed quantity of water, heat, cooling, gas or the like, typically has a flow part of metal with a through-going opening that forms a flow passage. Attached to the flow passage is a compartment or housing with a cavity for housing electronic components. The housing serves to protect electronic components, such as a measuring circuit that controls the ultrasonic transducer(s), as well as any additional electronic equipments, such as a calculation circuit for calculating the consumed quantity, a display for displaying a value representing the consumed quantity, a battery for powering the electronic components, a radio communication module, etc.
[0003] The fabrication of a flow meter comprises a number of production steps. To provide a flow meter which is cost-efficient to produce, it is necessary to control the fabrication process to limit the number of steps involved.
[0004] The international patent application WO 2009/129885 A1 discloses an ultrasonic measuring arrangement comprising a polymer-based measurement tube and housing, where the housing is injection moulded onto the measuring tube to connect them in a seal-less and seam-less manner. While this arrangement possibly is simpler to produce than flow meters based on metallic measurement tubes, it nevertheless suffers from the problem that a number of moulding steps are required in order to produce the assembly.

[0005] It may be seen as an object of the invention to provide an ultrasonic flow meter which can be produced and assembled with a limited number of steps.
[0006] In a first aspect, the invention provides an ultrasonic flow meter housing in the form of a monolithic polymer structure being cast in one piece. The monolithic structure includes a flow tube and a cavity separated from the flow tube, where the flow tube defines a through-going straight flow section arranged for passage of a fluid between an inlet and an outlet, and where a part of a wall the flow section is part of an inside surface of the cavity, so that the flow section and the cavity has a shared wall area;
wherein the cavity is arranged for housing
[0007] A flow meter with a housing in accordance with the present invention can be fabricated with a reduced number of steps compared to existing meters, since only a single step is used to form the monolithic polymer structure. The invention relies on the insight that a flow meter housing which has a straight flow section separated from a cavity in a manner where a part of the wall of the flow section is part of the inside of the cavity, can on one hand be cast in a single step, and can on the other hand provide a housing which is suitable for housing all necessary components of a flow meter.
[0008] In a general embodiment, the shared area may comprise openings through to the flow tube in order to mount ultrasonic transducers in the openings to provide direct contact with the flowing fluid. Such mount requires a fluid tight sealing between the transducers and the openings to hinder fluid flowing from the flow section to the cavity. Advantageously, in a preferred embodiment, the flow tube and the cavity are separate by a water-tight wall and the at least one ultrasonic transducer is arranged to transmit ultrasonic signals from the cavity through the wall in the shared area into the flow section by utilization of the so-called matching layer principle. In this embodiment, the ultrasonic transducer is simply positioned in contact with the shared area avoiding any sealing means. Thereby removing any steps necessary for obtaining a fluid-tight assembly, as well as any parts needed to provide the fluid-tight assembly. The matching layer principle is, e.g., further disclosed in the published patent application EP 2 037 231.
[0009] Advantageously, the cavity is provided with only a single opening which is arranged with means for sealed connection by a cover. In this manner, any electronic equipment provided in the enclosure of the cavity, can be sealed off from the surroundings by only a single sealing means. Moreover, since the flow section may be sealed by the shared wall/inner surface of the flow section, this single sealing is to seal the enclosure from the ambient conditions in which the flow meter is placed, and not against the flowing fluid.
[0010] In a second aspect, the invention relates to an ultrasonic flow meter comprising a housing in accordance with the first aspect of the invention.
[0011] It is appreciated that the same advantages and equivalent embodiments apply for the second aspect as mentioned for the first aspect.
[0012] Further advantageous embodiments of the first and second aspects are disclosed in the description of the embodiments.
[0013] In embodiments, the ultrasonic flow meter may be or may be part of a charging consumption meter, e.g. a water meter, gas meter, heat meter, or cooling meter. The consumption meter may be used in connection with district heating or district cooling. The consumption meter may be a legal meter, i.e. a meter which is subdued to regulatory demands. Such regulatory demands may be demands to the precision of the measurements.

[0014] Embodiments of the invention will be described, by way of example only, with reference to the drawings, in which

Fig. 1A and 1B illustrate an embodiment of a flow meter housing;

Fig. 2 illustrates an exploded view of an embodiment of an ultrasonic flow meter;

Fig. 3A and Fig. 3B illustrate the water meter of Fig. 2 in an assembled state;

Fig. 4 illustrates a flow meter housing with a measurement tube element inserted into the flowtube; and

Fig. 5A and 5B illustrate the moulding die in unassembled perspective view (Fig. 5A) and in assembled cross-sectional view (Fig. 5B).

- a housing formed by a monolithic structure of a composite polymer material, being cast in one piece, the monolithic structure including a flow tube defined by a first wall and a cavity partly defined by a second circumferential wall, the cavity being separated from the flow tube by the first wall, wherein the flow tube defines a through-going straight flow section arranged for passage of a fluid between an inlet and an outlet, and wherein a part of the first wall of the flow section is part of an inside surface of the cavity, so that the flow section and the cavity has a shared wall area;

wherein the cavity is configured for housing:

- a measurement circuit operationally connected to the ultrasonic transducers so as to allow measurement of a flow rate of the fluid;

- at least one battery for driving the measurement circuit;

- a calculation circuit arranged to calculate a consumed quantity of the flowing fluid based on the measured flow rate of the fluid; and

- a signal transmitter for wireless transmission of at least the consumed quantity of the flowing fluid; and 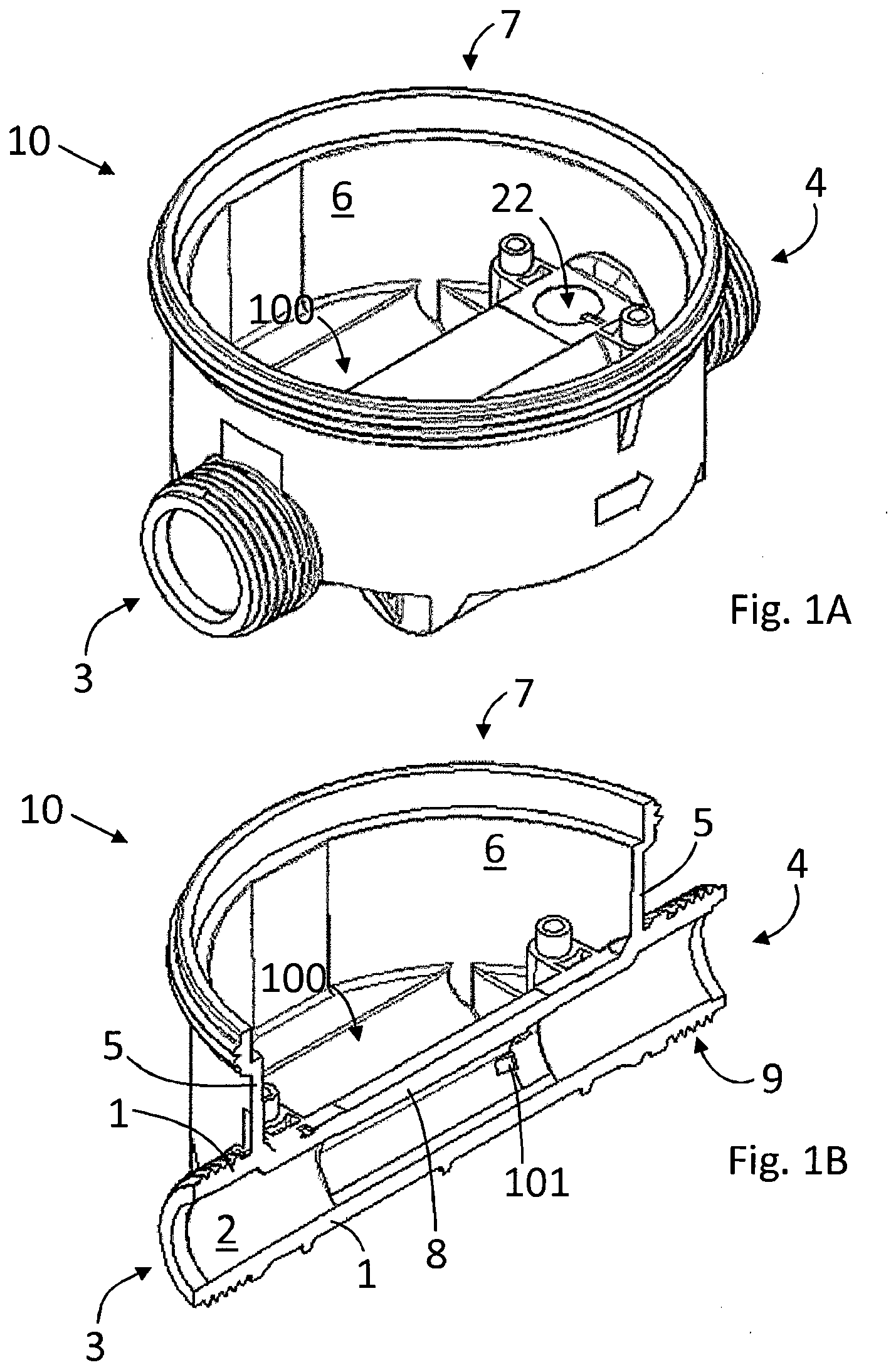 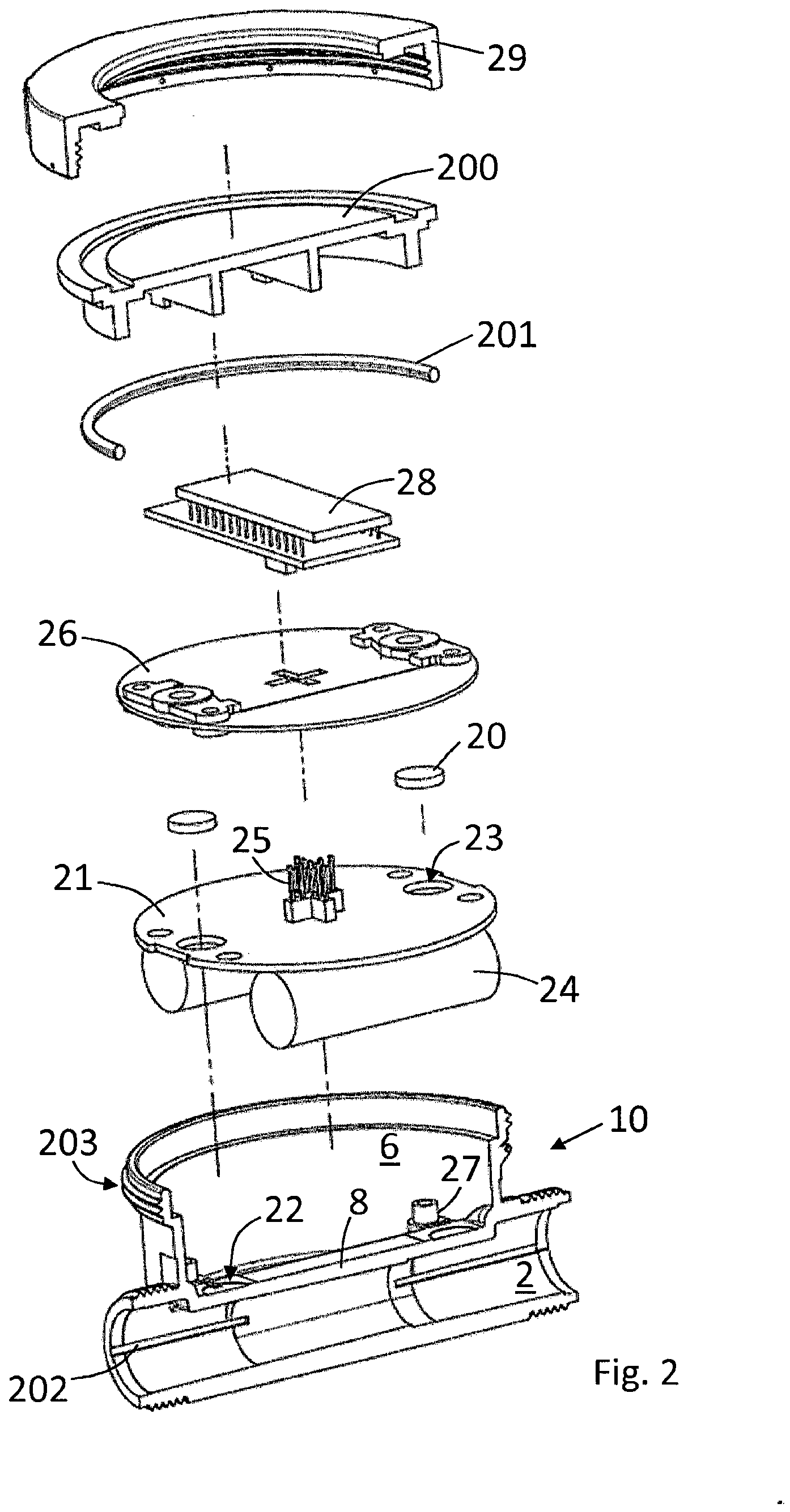 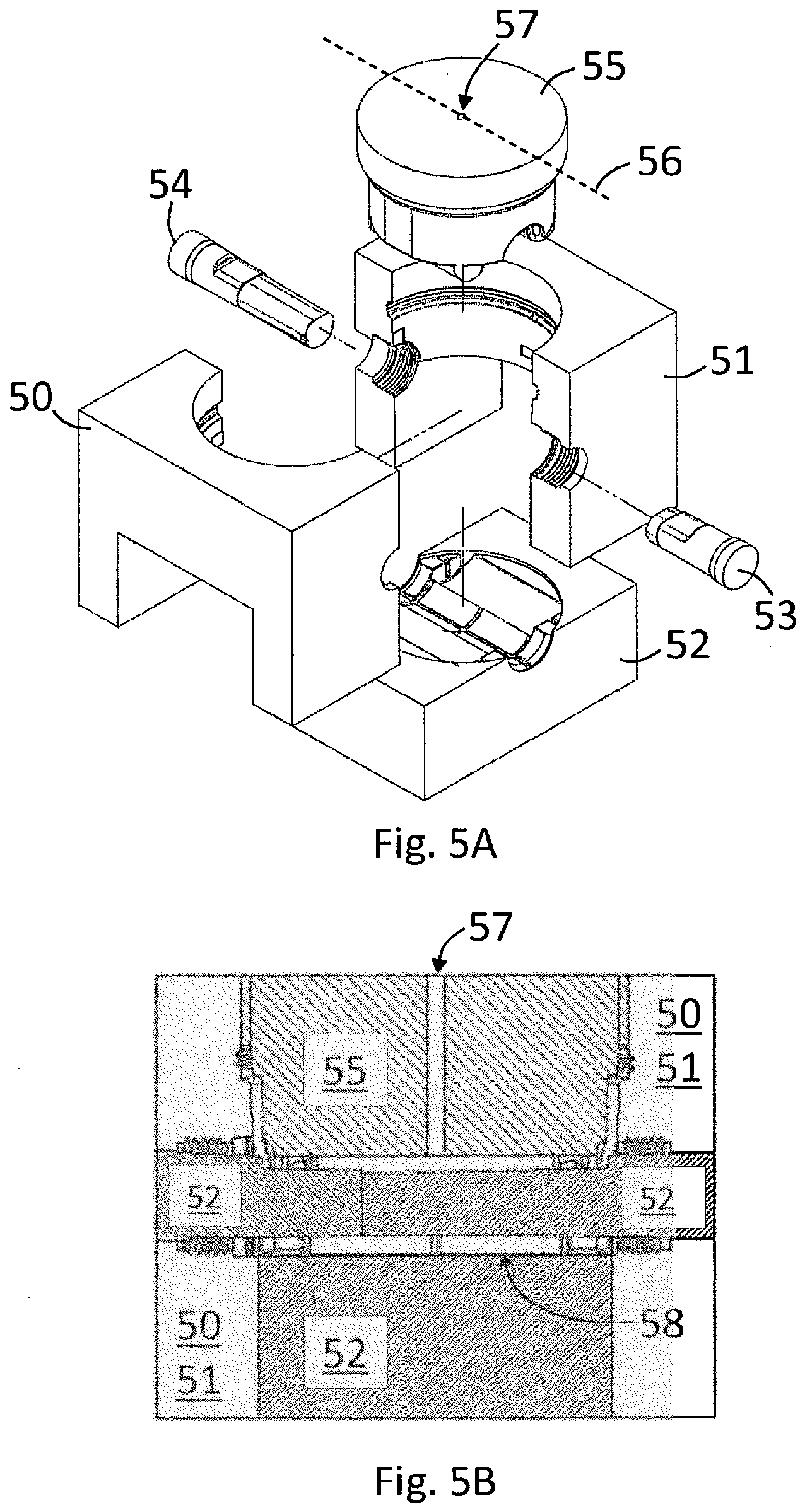