[0002] Pain is a complex subjective sensation reflecting real or potential tissue damage and the affective response to it. Acute pain is a physiological signal indicating a potential or actual injury. Chronic pain can either be somatogenetic (organic) or psychogenic. Chronic pain is frequently accompanied or followed by vegetative signs, which often result in depression. Chronic pain results in individual suffering and social economic costs of tremendous extent. Existing pharmacological pain therapies are widely unsatisfying both in terms of efficacy and of safety. Somatogenetic pain may be of nociceptive origin, inflammatory or neuropathic. Nociceptive pain is judged to be commensurate with ongoing activation of somatic or visceral painsensitive nerve fibers. Neuropathic pain results from dysfunction in the nervous system that is sustained by aberrant somatosensory processes in the peripheral nervous system. Neuropathic pain is a persistent or chronic pain syndrome that can result from damage to the nervous system, the peripheral nerves, the dorsal root ganglion, dorsal root, or to the central nervous system. Neuropathic pain syndromes include allodynia, various neuralgias such as post herpetic neuralgia and trigeminal neuralgia, phantom pain, and complex regional pain syndromes, such as reflex sympathetic dystrophy and causalgia. Causalgia is often characterized by spontaneous burning pain combined with hyperalgesia and allodynia. Tragically there is no existing method for adequately, predictably and specifically treating established neuropathic pain as present treatment methods for neuropathic pain consists of merely trying to help the patient cope through psychological or occupational therapy, rather than by reducing or eliminating the pain experienced. Treatment of neuropathic or chronic pain is a challenge for physicians and patients since there are no medications that specifically target the condition, and since the medications presently used result in only little relief and are based on their efficacy in acute pain conditions or on their efficacy on relieving secondary effects like anxiety and depression. Incidence of chronic pain is increasing in society and its burden on society is huge in both health care and lost productivity. Currently there are no scientifically validated therapies for relieving chronic pain. As a result, the health community targets 'pain management' where multi-modal therapies are used concurrently with the hope of providing some improvement in quality of life. Thus, there is an urgent need for drugs that can relieve chronic pain.
[0003] Recent studies identified members of the transient receptor potential-family of ion channels (TRPV1, TRPA1 and TRPV4) as contributors to both mechanical and cold allodynia during oxaliplatin and paclitaxel-induced neuropathy. Activation or sensitization of TRPV1 and TRPA1 can lead to enhanced release of CGRP and substance P both of which can cause neurogenic inflammation and recruitment of T-cells.
[0004] Activation of EP signalling plays a role in neuronal sensitization mediating modulation of the TRPV1 receptor. Intradermal injection of the dual BLT1 and BLT2 activator LTB4 has been shown to produce both thermal and mechanical hyperalgesia (Okubo et al., Molecular pain, 2010, 6:57, 1-9).
[0005] Capsaicin is a highly selective agonist for transient receptor potential vanilloid 1 receptor (TRPV1; formerly known as vanilloid receptor 1 (VR1)), a ligand-gated, non-selective cation channel preferentially expressed on small-diameter sensory neurons, especially those C-fibers which specialize in the detection of painful or noxious sensations. TRPV1 responds to noxious stimuli including capsaicin, heat, and extracellular acidification, and will integrate simultaneous exposures to these stimuli. The initial effect of the activation of TRPV1-expressing (capsaicin-sensitive) nociceptors are burning sensations, hyperalgesia, allodynia, and erythema. However, after prolonged exposure to low-concentration capsaicin or single exposures to high-concentration capsaicin or other TRPV1 agonist, the small-diameter sensory axons become less sensitive to a variety of stimuli, including capsaicin or thermal stimuli. This prolonged exposure is also characterized by reduced pain responses. These later-stage effects of capsaicin are frequently referred to as "desensitization" and are the rationale for the development of local capsaicin formulations for the treatment of various pain syndromes and other conditions.
[0006] Up to now, two classes of analgesics are mainly employed for the treatment of pain: Non-opioid analgesics, mostly acetaminophen and NSAIDS (non-steroidal anti-inflammatory drugs) and opioid (narcotic) agonists (wherein "opioid" is a generic term for natural or synthetic substances that bind to specific opioid receptors in the CNS, producing an agonist action). Unfortunately both analgesic classes, opioids and non-opioids, have several unwanted side effects. The most serious side effects of opioids are the possibility of inhibition of the respiratory system and after long-term treatment the possibility of addiction. NSAIDs, a major class of non-opioids, on the other hand, can induce a variety of gastrointestinal complications such as ulcers and bleeding, but also kidney damage (Scholich and Geisslinger, 2006).
[0007] Hence, until this day there is no specific therapy for neuropathic pain available. The present invention seeks to provide novel analgesics that overcome the problems associated with opioids and NSAIDs.

[0068] All animal experiments were performed according to the recommendations in the Guide for the Care and Use of Laboratory Animals of the National Institutes of Health and approved by the local Ethics Committees for Animal Research (Darmstadt). For all behavioral experiments the inventors used only 6-12 weeks old male C57BL/6N mice purchased from commercial breeding companies (Charles River, Sulzfeld, Germany, Janvier, Le Geneset-Saint-Isle, FR). To compare mechanical thresholds the inventors used age and sex matched littermates as control.

[0069] For the determination of mechanical allodynia or thermal hypersensitivity, mice were kept in test cages on an elevated grid for at least 2 hours to allow accommodation. Baseline measurements were performed using a Hargreaves Apparatus (Ugo Basile, Comerio, VA, Italy) detecting withdrawal latency of the hind paws after mechanical stimulation for determination of thermal thresholds, mice were kept in test cages on a warmed glass plate (32°C) for at least 2 hours on the first day to allow accommodation. Then, the mid-plantar region of the paws was stimulated with a radiant heat device, consisting of a high intensity projector lamp, until withdrawal occurred. The non-injected and injected paws were measured alternately in intervals of 5-10 min. For all behavioral tests the investigator was blinded for treatment or genotype of the mice. 10 µl of LTB4 (5 µM), CAY10583 (5 µM) or vehicle were injected intraplantarly.

[0072] The MELC technology has been described previously (Pierre et al., 2008; Pierre, 2010). 10 µl LTB4, CAY10583 or vehicle were injected in the hindpaw. Animals were killed at the indicated time points. Paw edemas were embedded in tissue freezing medium (Leica microsystems Nussloch, Germany), cryosections of 10 µm thickness were sliced using the Leica CM 3050S cryostat (-20°C; Leica, Wetzlar, Germany) and applied on silane-coated coverslips. The tissue was fixed in 4% paraformaldehyde in PBS, permeabilized with 0.1% triton in PBS and blocked with 3% BSA in PBS for 1h at room temperature. The sample was placed on the stage of an inverted wide-field fluorescence microscope (Leica DM IRE2; x63 oil lens NA 1.32). A picture before the application of antibodies was taken. By a robotic process, first the slices were incubated for 15 min with predetermined fluorescence-labeled antibodies (supplementary data 1) and rinsed with PBS. Afterwards, the phase contrast and fluorescence signals were imaged by a cooled charge-coupled device camera (Apogee KX4; Apogee Instruments, Roseville, CA, 2x binning results in images of 1024x1024 pixels; final pixel size was 286x286 nm2). To delete the specific signal of the antibody before addition of the next, a bleaching step was performed. A postbleaching image was recorded and subtracted from the following fluorescence tag image during the data analysis. Using the corresponding phase contrast images, fluorescence images produced by each antibody were aligned pixel-wise. Images were corrected for illumination faults using flat-field correction.

[0073] All data are presented as mean ± S.E.M. To determine statistically significant differences in all behavioral experiments analysis of variance (ANOVA) for repeated measures was used followed by post hoc Bonferroni correction using GraphPad Prism. For in vitro experiments comparing only two groups, student's t-test was carried out. P < 0.05 was considered as statistically significant.

[0078] Next, the effect of the BLT2 agonist CAY10583 on TRPV1 sensitization by receptors activating signaling pathways known to sensitize TRPV1 was studied. Therefore, TRPV1 was sensitized using the PGE2 receptor 4 (EP4) ligand ONOae329. Here, sensitization is achieved through increased cAMP synthesis, subsequent protein kinase A (PKA) activation and TRPV1 phosphorylation (Bhave et al., 2002). Pretreatment of murine DRG neurons with ONOae329 induced a strong sensitization of TRPV1 responses to capsaicin which was abolished in presence of the BLT2 agonist CAY10583 (Fig. 4A,B). Likewise, bradykinin-induced phosphorylation and sensitization of TRPV1 through PKC was significantly decreased in presence of CAY10583 (Fig. 4C,D).

[0079] To study potential analgesic effects of BLT2 activation, the BLT2 agonist CAY10583 or vehicle were injected in hind paws of mice and the thermal pain thresholds were determined. In accordance with the inventor's data showing decreased TRPV1 sensitization in vitro, CAY10583 was able to significantly increase thermal pain thresholds as compared to mice receiving only vehicle (Fig. 5). 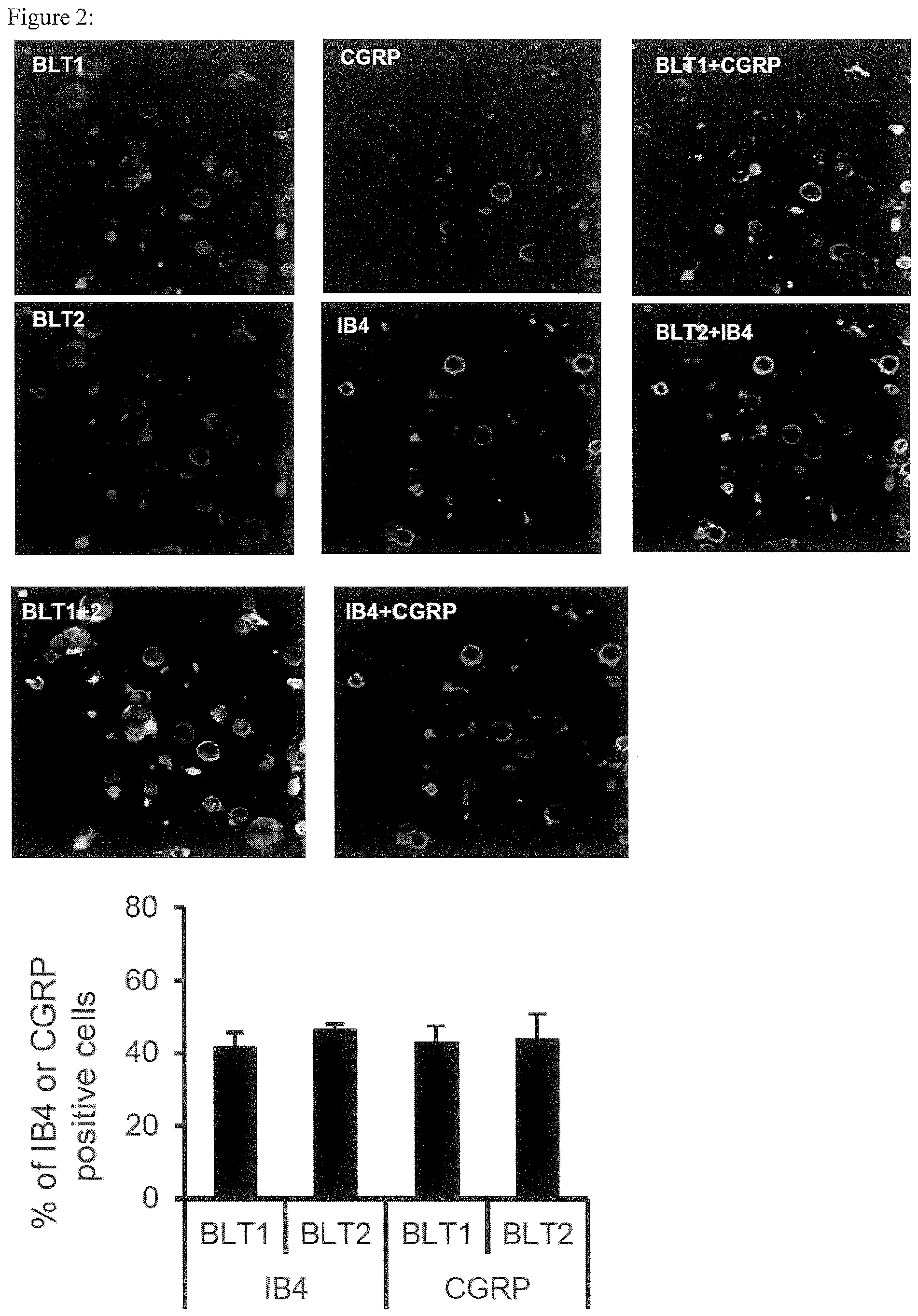 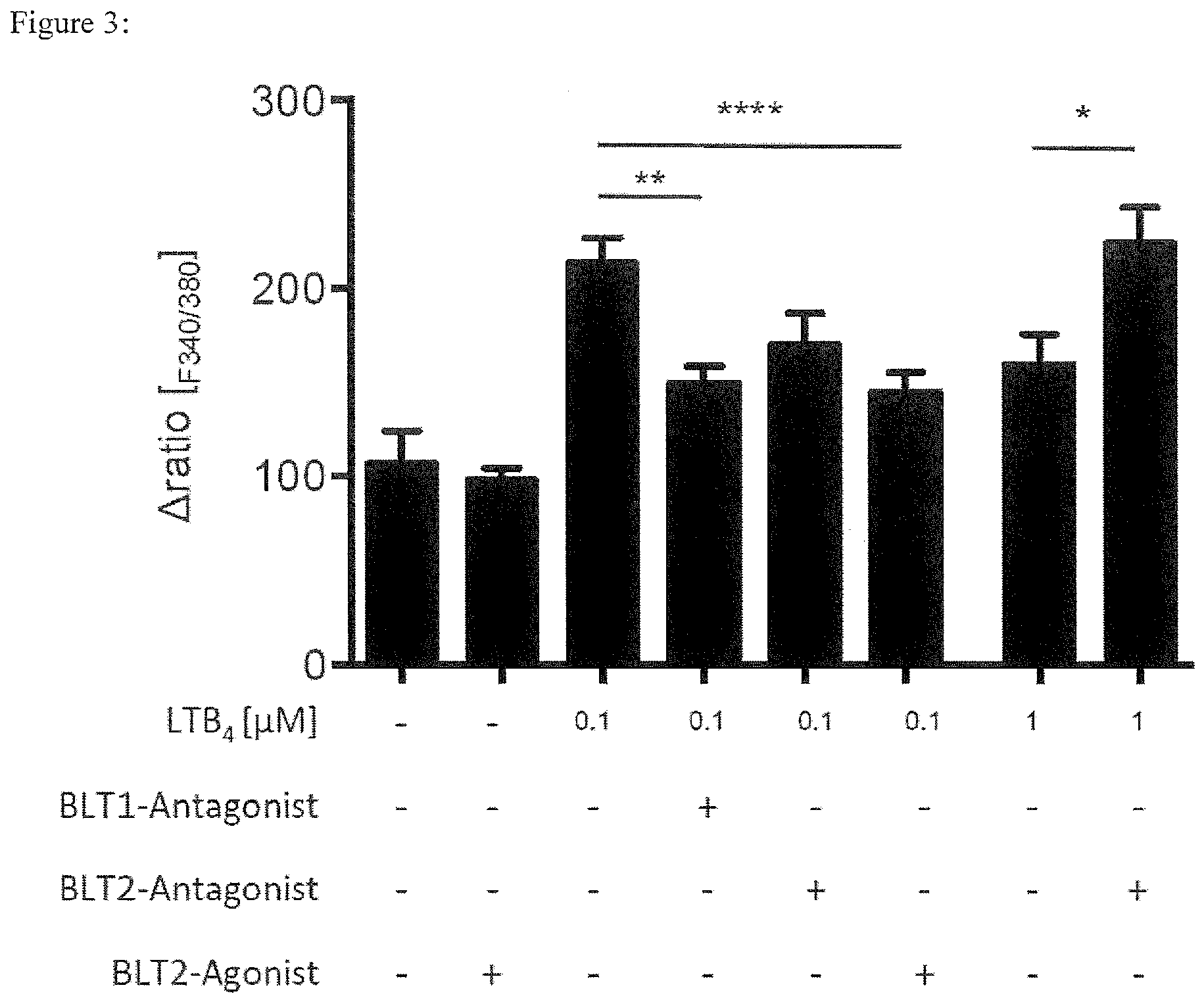 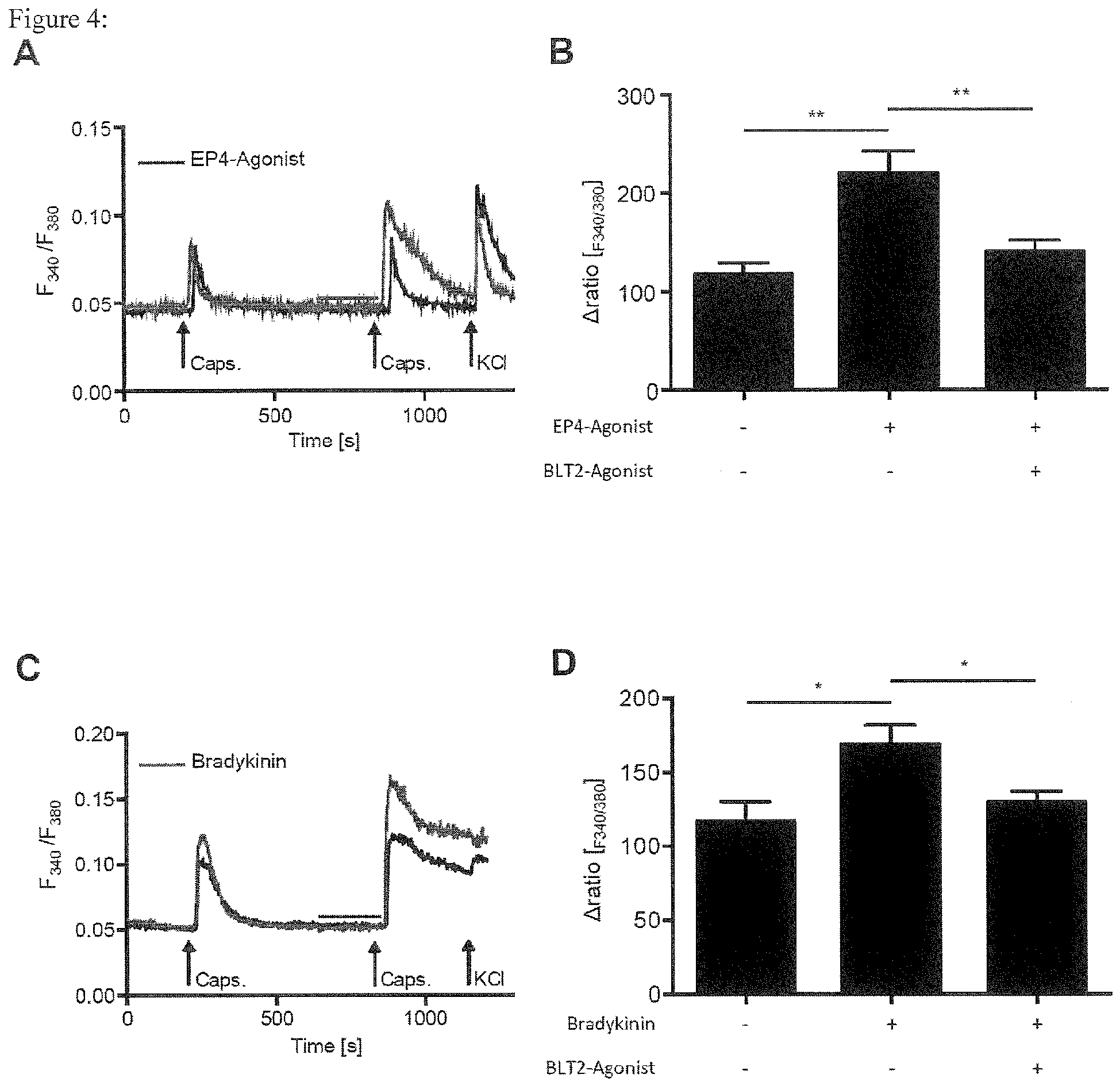 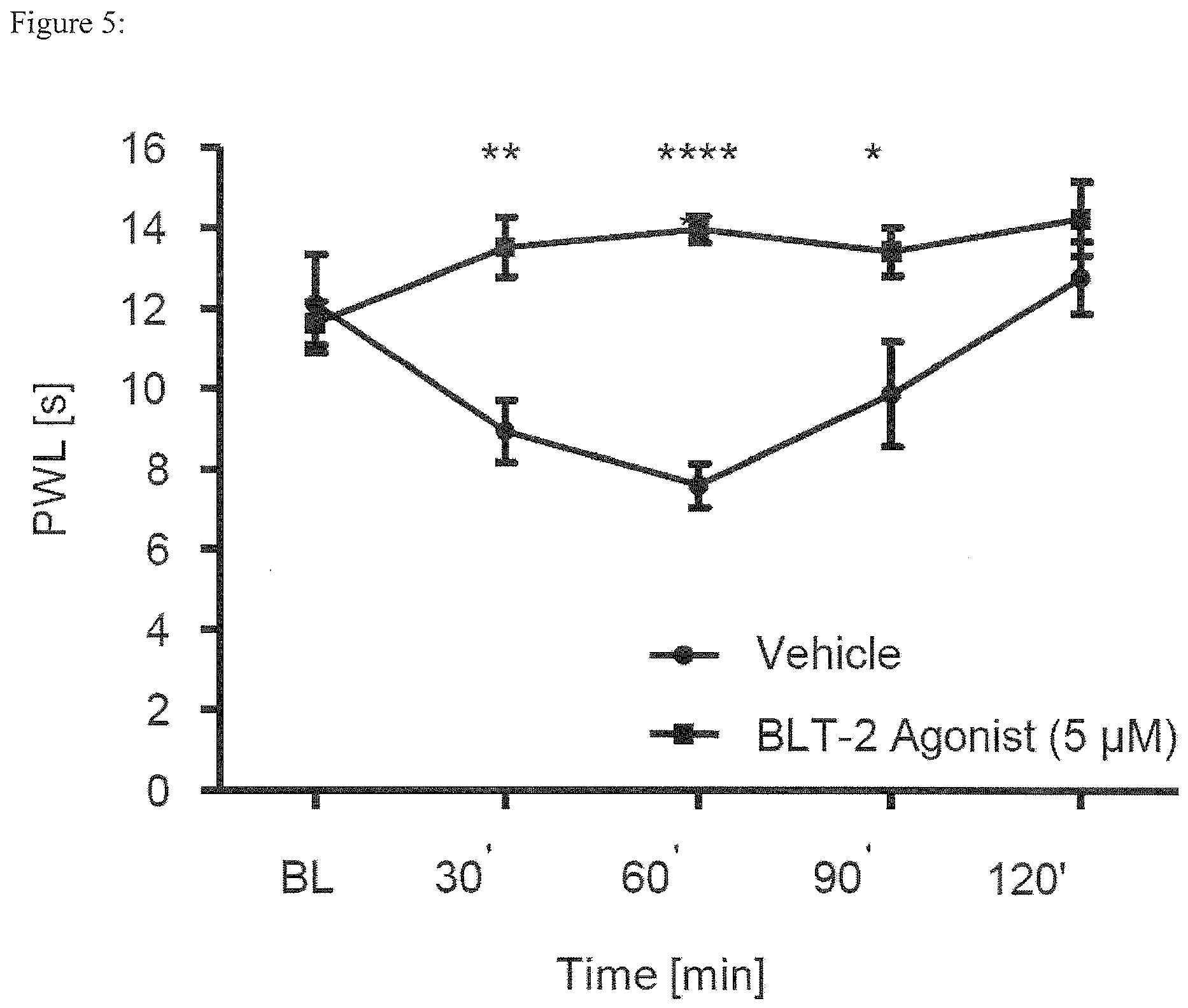