[0001] Quantum Dot Enhancement Films (QDEF) are used as the light source for LCD displays. Red and green quantum dots are used in QDEF with a blue LED as the light source to give the full spectrum of colors. This has the advantage of improving the color gamut over the typical LCD display and keeping the energy consumption low compared to LED displays.
[0002] Quantum dot film articles include quantum dots dispersed in a matrix that is laminated between two barrier layers. The quantum dot articles, which include combinations of green and red quantum dots as fluorescing elements, can enhance color gamut performance when used in display devices such as, for example, liquid crystal displays (LCDs).
[0003] Quantum dots are highly sensitive to degradation, so the quantum dot article should have excellent barrier properties to prevent ingress of, for example, water and oxygen. The barrier layers protect the quantum dots in the interior regions of the laminate construction from damage caused by oxygen or water exposure, but the cut edges of the article expose the matrix materials to the atmosphere. In these edge regions the protection of the quantum dots dispersed in the matrix is primarily dependent on the barrier properties of the matrix itself.
[0004] If water and/or oxygen enter the edge regions of the quantum dot article, the quantum dots on or adjacent to the exposed edge of the laminate construction can degrade and ultimately fail to emit light when excited by ultraviolet or visible light below the emissiom wavelength of the quantum dots. This type of quantum dot degradation, referred to as edge ingress, can cause a dark line around a cut edge of the film article, which can be detrimental to performance of a display in which the quantum dot article forms a part.
[0005] US2012/223291A1 discloses a quantum dot film article in a quantum-dot based photodetector.

[0006] In general, the present disclosure is directed to matrix formulations for use in quantum dot articles. The matrix formulations resist ingress from water and/or oxygen, while also providing acceptable color stability upon aging. In one embodiment, the present disclosure is directed to a film article including a first barrier layer; a second barrier layer; and a quantum dot layer between the first barrier layer and the second barrier layer. The quantum dot layer includes quantum dots dispersed in a matrix including a cured thiol-alkenyl resin.
[0007] More particularly, the thiol-alkene matrix is the cured reaction product of a polythiol and a polyalkenyl compound (polyalkene), at least one of which has a functionality of > 2.
[0008] With the thiol-alkene matrix, edge ingress of the converted parts is observed to not exceed 1 mm after 100+ hours of accelerated aging. In various embodiments, the matrix materials described in this disclosure limit the edge ingress after aging in 65°C at 95% relative humidity or 85°C conditions to less than 0.5 mm, and have a color change that does not exceed 0.02, or even 0.005, in both x and y from the initial measurement in the 1931 CIE coordinate system. These matrix formulations can extend the useful life of the quantum dot articles in display applications.
[0009] As used herein
"thiol-alkene" refers to the reaction mixture of a polythiol and a polyalkene compound having two or more alkenyl groups, and is used exclusive from thiol-ene reactions with alkynes and (meth)acrylates.
[0010] "Alkyl" means a linear or branched, cyclic or acylic, saturated monovalent hydrocarbon.
[0011] "Alkylene" means a linear or branched unsaturated divalent hydrocarbon.
[0012] "Alkenyl" means a linear or branched unsaturated hydrocarbon.
[0013] "Aryl" means a monovalent aromatic, such as phenyl, naphthyl and the like.
[0014] "Arylene" means a polyvalent, aromatic, such as phenylene, naphthalene, and the like.
[0015] "Aralkylene" means a group defined above with an aryl group attached to the alkylene, e.g., benzyl, 1-naphthylethyl, and the like.
[0016] As used herein, "(hetero)hydrocarbyl" is inclusive of hydrocarbyl alkyl and aryl groups, and heterohydrocarbyl heteroalkyl and heteroaryl groups, the later comprising one or more catenary (in-chain) heteroatoms such as ether or amino groups. Heterohydrocarbyl may optionally contain one or more catenary (in-chain) functional groups including ester, amide, urea, urethane, and carbonate functional groups. Unless otherwise indicated, the non-polymeric (hetero)hydrocarbyl groups typically contain from 1 to 60 carbon atoms. Some examples of such heterohydrocarbyls as used herein include, but are not limited to, methoxy, ethoxy, propoxy, 4-diphenylaminobutyl, 2-(2'-phenoxyethoxy)ethyl, 3,6-dioxaheptyl, 3,6-dioxahexyl-6-phenyl, in addition to those described for "alkyl", "heteroalkyl", and "aryl" supra.
[0017] The term "composite particle" as used herein refers to a nanoparticle, which is typically in the form of a core/shell nanoparticle (preferably, nanocrystal), having any associated organic coating or other material on the surface of the nanoparticle that is not removed from the surface by ordinary solvation. Such composite particles are useful as "quantum dots," which have a tunable emission in the near ultraviolet (UV) to far infrared (IR) range as a result of the use of a semiconductor material.
[0018] The term "nanoparticle" refers to a particle having an average particle diameter in the range of 0.1 to 1000 nanometers such as in the range of 0.1 to 100 nanometers or in the range of 1 to 100 nanometers. The term "diameter" refers not only to the diameter of substantially spherical particles but also to the distance along the smallest axis of the structure. Suitable techniques for measuring the average particle diameter include, for example, scanning tunneling microscopy, light scattering, and transmission electron microscopy.
[0019] A "core" of a nanoparticle is understood to mean a nanoparticle (preferably, a nanocrystal) to which no shell has been applied or to the inner portion of a core/shell nanoparticle. A core of a nanoparticle can have a homogenous composition or its composition can vary with depth inside the core. Many materials are known and used in core nanoparticles, and many methods are known in the art for applying one or more shells to a core nanoparticle. The core has a different composition than the one more shells. The core typically has a different chemical composition than the shell of the core/shell nanoparticle.
[0020] As used herein, the term "actinic radiation" refers to radiation in any wavelength range of the electromagnetic spectrum. The actinic radiation is typically in the ultraviolet wavelength range, in the visible wavelength range, in the infrared wavelength range, or combinations thereof. Any suitable energy source known in the art can be used to provide the actinic radiation.

FIG. 1 is a schematic side elevation view of an edge region of an illustrative film article including quantum dots.

FIG. 2 is a flow diagram of an illustrative method of forming a quantum dot film.

FIG. 3 is a schematic illustration of an embodiment of a display including a quantum dot article.

where R2 is (hetero)hydrocarbyl group having a valence of y, and y is ≥ 2, preferably > 2. The thiol groups of the polythiols may be primary or secondary. The compounds of Formula I may include a mixture of compounds having an average functionality of two or greater.

R1 is a polyvalent (hetero)hydrocarbyl group,

and x is ≥ 2. The compounds of Formula II may include vinyl ethers.

[0032] In some embodiments, R1 is an aliphatic or aromatic group. R1 can be selected from alkyl groups of 1 to 20 carbon atoms or aryl aromatic group containing 6-18 ring atoms. R1 has a valence of x, where x is at least 2, preferably greater than 2. R1 optionally contains one or more esters, amide, ether, thioether, urethane, or urea functional groups. The compounds of Formula I may include a mixture of compounds having an average functionality of two or greater. In some embodiments, R10 and R11 may be taken together to form a ring.
[0033] In some embodiments, R1 is a heterocyclic group. Heterocyclic groups include both aromatic and non-aromatic ring systems that contain one or more nitrogen, oxygen and sulfur heteroatoms. Suitable heteroaryl groups include furyl, thienyl, pyridyl, quinolinyl, tetrazolyl, imidazo, and triazinyl. The heterocyclic groups can be unsubstituted or substituted by one or more substituents selected from the group consisting of alkyl, alkoxy, alkylthio, hydroxy, halogen, haloalkyl, polyhaloalkyl, perhaloalkyl (e.g., trifluoromethyl), trifluoroalkoxy (e.g., trifluoromethoxy), nitro, amino, alkylamino, dialkylamino, alkylcarbonyl, alkenylcarbonyl, arylcarbonyl, heteroarylcarbonyl, aryl, arylalkyl, heteroaryl, heteroarylalkyl, heterocyclyl, heterocycloalkyl, nitrile and alkoxycarbonyl.
[0034] In some embodiments, the alkene compound is the reaction product of a mono- or polyisocyanate:

R3 is a (hetero)hydrocarbyl group;

R5 is a (hetero)hydrocarbyl group,

where n is at least one;

R8 is (hetero)hydrocarbyl group having C2 to C30 carbon atoms; preferably a linear or branched alkyl of 10 to 30 carbon atoms or a polysiloxane;

p is at least one; preferably at least two

X is an electron-donating group. Preferably X is an amino group or a thiol. Such additional ligands may be added when the functionalizing with the ligands of Formula I. Generally, there are many ligand molecules per nanoparticle. The ligands are in excess of the nanocrystals to insure coverage of the QDs.

each R6 is independently an alkyl or aryl;

y may be zero;

x+y is at least one;

[0107] EX13 was prepared in the same manner as EX7 except that the matrix formulations used polythiol with higher crosslink degree, DPETMP, as summarized in Table 5, below. The coating showed great quality. Table 5, below, summarizes the matrix coating formulations and Tg, QY data (EQE%, Abs%) for EX13.
Table 5

[0108] After aging at 85°C for 7 days EX13 sample demonstrated high stability of QY and very low edge ingress as shown in Table 6, below.
Table 6

a second barrier layer; and

R8 is (hetero)hydrocarbyl group having C2 to C30 carbon atoms; preferably a linear or branched alkyl of 10 to 30 carbon atoms or a polysiloxane;

p is at least one; preferably at least two

X is an electron-donating group.

R1 is a polyvalent (hetero)hydrocarbyl group, 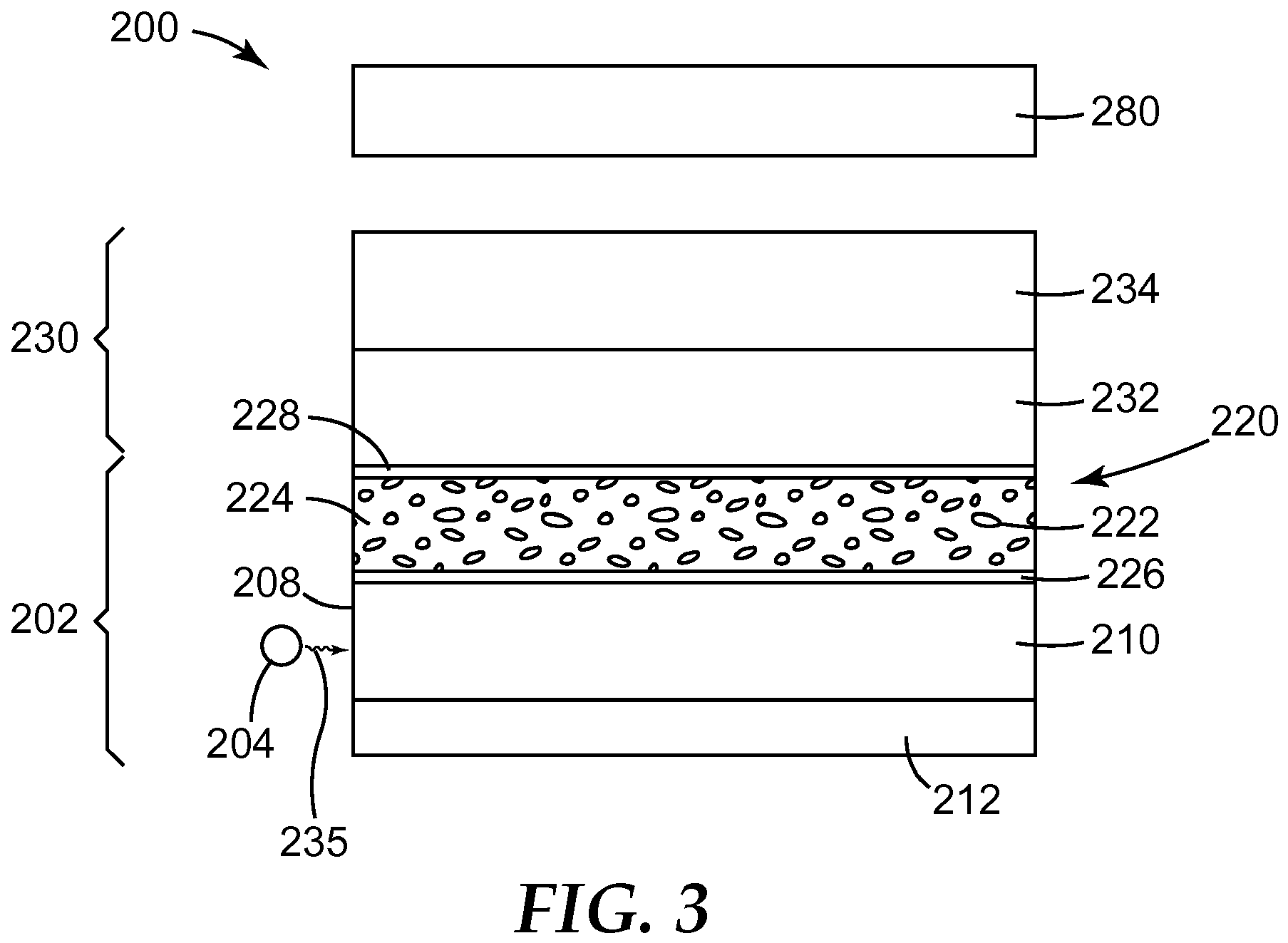