[0001] The invention relates to a method for sealing of a circumferentially closed canal.

[0002] Filling not enlarged canals as root canals requires a new approach capable of covering irregular root canal space without voids. This is possible with a low viscosity obturation material. The risk is however a penetration of the filling material over the apex. An apical "plug" placed in the apical region before filling the canal with the low viscosity material can prevent this. Conventional solutions for placing an apical plug are disclosed already (e.g. US2009/0220909 A1 Müller, Mannschedel, Coltene/Whaledent) require however a canal preparation according to ISO and cannot be applied to irregular canals.
[0003] Medical instruments are often in contact with body fluids during surgical or diagnostic procedures which always have the risk of contamination with bacteria and debris. Many instruments like endoscopes or surgical instruments have small working channels, which are used to transport fluids or e.g. laser fibers into the body of a patient and even worse body fluids are removed via these channels from the body of a patient.
[0004] Therefore, efficient sterilization procedures for those devices are important as long the devices are no disposables. Especially the working channels are problematic from a hygiene standpoint, as they are not easy accessible and not visible from outside. Conventional cleaning is done by soaking in a cleaning fluid and/or flushing a cleaning fluid through the working canals. Typically no direct check is done whether the cleaning was successful.

[0052] The present invention can be better understood and its advantages appreciated by those skilled in the art by referencing to the accompanying drawings. Although the drawings illustrate certain details of certain embodiments, the invention disclosed herein is not limited to only the embodiments so illustrated.

[0102] A device according to the invention is shown in principle in Fig. 4. The device comprises a desktop device 40 with a touch screen 42 and a housing with integrated cooling elements 44. The housing is connected to the turbine connector of a dental unit 6 (connector 46) to have supply with water and compressed air. The desktop housing is connected to a handpiece 48 with a delivery system 50.
[0103] The handpiece 48 is connected to the delivery system 50 via a rotation coupling. A fiber tip 52 can be connected to the handpiece and disposable containers 54 with cleaning fluid can be attached and removed from the handpiece. The housing is connected with the handpiece 48 via a connecting line 56.
[0104] The portable desktop device 40 comprises a laser as energy source. The laser radiation is transmitted with a delivery system together with water and compressed air and optionally cleaning fluids to the handpiece 48 with detachable fiber tip 52.
[0105] The energy source is a Diode pumped ER:YAG - (Wavelength 2.94 µm), Er:YSGG - (Wavelength 2.78 µm) or CTE Laser (wavelength 2.69 µm). The pulse length is between 5 - 1000 µs, preferably 25 - 400 µs, most preferably 50 - 200 µs. The pulse energy is between 0,5 - 50 mJ, preferably 1 - 10mJ at the distal end of the applicator. This requires around the double pulse energy at cavity exit. The average power is between 0,5 - 10W preferably 1 - 3W and the peak power is < 600W at cavity exit.
[0106] Further the device is equipped with light sources for aiming beam and apical plug heating and optional for bacteria detection and for PDT.
[0107] The aiming beam is coupled through the Er:YAG rod from the 100% reflection mirror side and the other light source for apical plug heating and PDT is coupled into the light path with a dichroitic beam combiner. High power LEDs or laser diodes e.g. ADL-63V0ANP (Laser Components) may be used. The laser diode may be operated in parallel to the MID IR laser and is simultaneously transmitted to the handpiece. For fluorescence excitation (bacteria detection, canal cleanliness detection) cw or pulsed laser diodes in the range 350 - 700nm are used.
[0108] The device uses preferably air cooling for laser cavity and electronics.
[0109] A schematic depiction of the laser system is shown in Fig. 6 which is self-explaining.
[0110] Especially, the invention is characterized by a diode pumped Er:YAG- / Er:YSGG/ CTE:YAG laser providing a cleanliness check of the canal as root canal via the same optical fiber used for the canal cleaning with the following excitation / detection wavelength ranges for bacteria fluorescence detection.
[0111] Further, the invention is characterized by a diode pumped Er:YAG- / Er:YSGG / CTE:YAG laser providing a cleanliness check of the canal as root canal via a metallization layer on the optical fiber tip used for the root canal cleaning using electrical impedance spectroscopy.
[0112] In addition, the invention is characterized by a diode pumped Er:YAG- / Er:YSGG / CTE:YAG laser providing energy (0.05W - 3W with 200 - 800Hz pulse repetition rate) into the canal as root canal via a fiber optic tip to heat the root canal inner surface via radiation absorption up to a 500 µm vicinity to temperatures lethal for bacteria reaching local peak temperatures on the root canal wall well above 100°C and keeping the periodontal temperatures well below critical 43°C.
[0113] A further feature of the invention is a diode pumped Er:YAG- / Er:YSGG / CTE:YAG laser providing an additional light source emitting at 670nm with around 80 - 200 mW and/or 635 nm with 50 - 150 mW to simultaneously initiate PDT with fluids like Methylen Blue or Toluidin Blue and agitate the PDT fluid by laser energy with rapidly induced steam bubbles and adjacent fluid motion and heat.
[0114] Water and compressed air are provided by plugging a dental turbine connector in a socket of the device. The device may have further exchangeable containers 54 for different cleaning fluids (sterile water, NaOCl, EDTA), if these containers 54 are not positioned directly at the handpiece 48. These cleaning fluid containers are pressurized by the compressed air of the dental chair provided by the dental turbine connector 46.
[0115] The fluid flow from these containers 54 to the handpiece 48 is controlled with electromagnetic valves operated via the µC (embedded micro-controller). Controlling the laser parameters and the sequencing of the cleaning fluids, laser assisted drying and compressed air allows a fully automated cleaning process canal by canal (TABLE II). The dentist needs just to press a start button and then move gently the fiber in the canal up and down until a ready sign appears (LED or Beep). Then the fiber 14 is inserted in the next canal and the procedure is repeated.
Optional: 30s H2O, 100Hz, 1,8 mJ (Pre - cleansing, with low AVG power, create access for water in deeper canal sections)
TABLE II

[0117] The laser parameters used when cleaning a canal are specified in TABLE III.
[0118] Mechanisms are provided to ensure that the laser can only operate, if the laser fiber 14 is placed in the root canal 10 to reduce laser safety risks.
[0119] When the fiber tip 18 is inserted into the root canal 10 the light received through the fiber 14 is far less compared to the fiber 14 being in ambient light. A detector in the laser system measures the light coming back from the fiber tip 18 and detects the absolute light level and the change in light level (first derivative). This detection can be done independently from any micro-controller or detection software. It is based on fixed wired hardware with a fail-safe design, which disables the laser system in case of a hardware fault in the detection unit.
[0120] The electronics further can detect the change of reflection of light emitted into the fiber delivery system (e.g. the aiming beam) when the refraction index difference changes while immersing the fiber tip 18 into the fluid contained in the root canal. The light of the aiming beam is amplitude modulated to differentiate the signal from the ambient light.
[0121] Another method to detect the fiber tip 18 position inside a root canal 10 is to metallize the surface of the fiber 14, inject a measurement current (AC) into the electrode(s) 180, 182 and measure the impedance change during insertion of the fiber into the root canal 10. The fiber 14 may be fully metallized as one electrode in combination with a counter electrode held by the patient or attached to the mouth of the patient (lip clip). A preferred solution is, however, a dual electrode concept, i.e. a first and a second electrode 180, 182, avoiding a counter electrode. Unambiguous connection is guaranteed by indexing the fiber tip.
[0122] Metallization layer may consist of a full coating of the optical fiber except the conical part of the fiber tip or may be a structured layer forming one or more electrodes on the same outer fiber surface.
[0123] A metallized tip configuration enables further "Canal is still wet" detection preferably with a dual electrode metallized fiber tip (see Fig. 5).
[0124] A wet canal has a significantly higher relative permittivity constant compared to a dry canal. H2O:

The apical plug placement program is used in combination with a fiber with attached guttapercha plug. With the laser heat is applied to partially melt the plug in apical position and detach it from the fiber tip.

[0156] The obturation support program is used to accelerate a low viscosity obturation material placed over the apical plug in the root canal against the root canal wall to enhance the dense coverage of the whole root canal wall with obturation material. For that purpose transient steam bubbles are generated in the root canal filling material. The applied heat can further reduce the viscosity during the application additionally enabling the obturation material to creep in any niche of the canal.
[0157] The invention provides an automated control of the laser parameters and the sequencing of the cleaning fluids, laser assisted drying and compressed air, which allows a fully automated cleaning process.
[0158] Although the invention has been explained above with the help of the cleaning of a root canal, the teaching according to the invention is, as was already explained, suitable for the cleaning of canals in which canals of smaller diameters as those of root canals are to be cleaned, particularly such canals which do not extend evenly in their longitudinal direction. With respect to this, reference is made to the introductory explanations.

7. A method according to at least one of the preceding claims,
wherein a material that comprises a first component and a second component which react with one another in a volume-expanding manner is used as sealing material.

8. A method according to at least one of the preceding claims,
wherein a material is used as a closure element that comprises an in particular volume-scattering core material and an expanding material that envelops it.

9. A method according to at least one of the preceding claims,
wherein an Er:YAG laser, Er:YSGG laser or CTE laser is used as the laser.

11. A method according to at least one of the preceding claims,
wherein a laser beam is used that has a pulse energy exiting from the light guide between 0.5 mJ and 50 mJ, in particular between 1 mJ and 10 mJ. 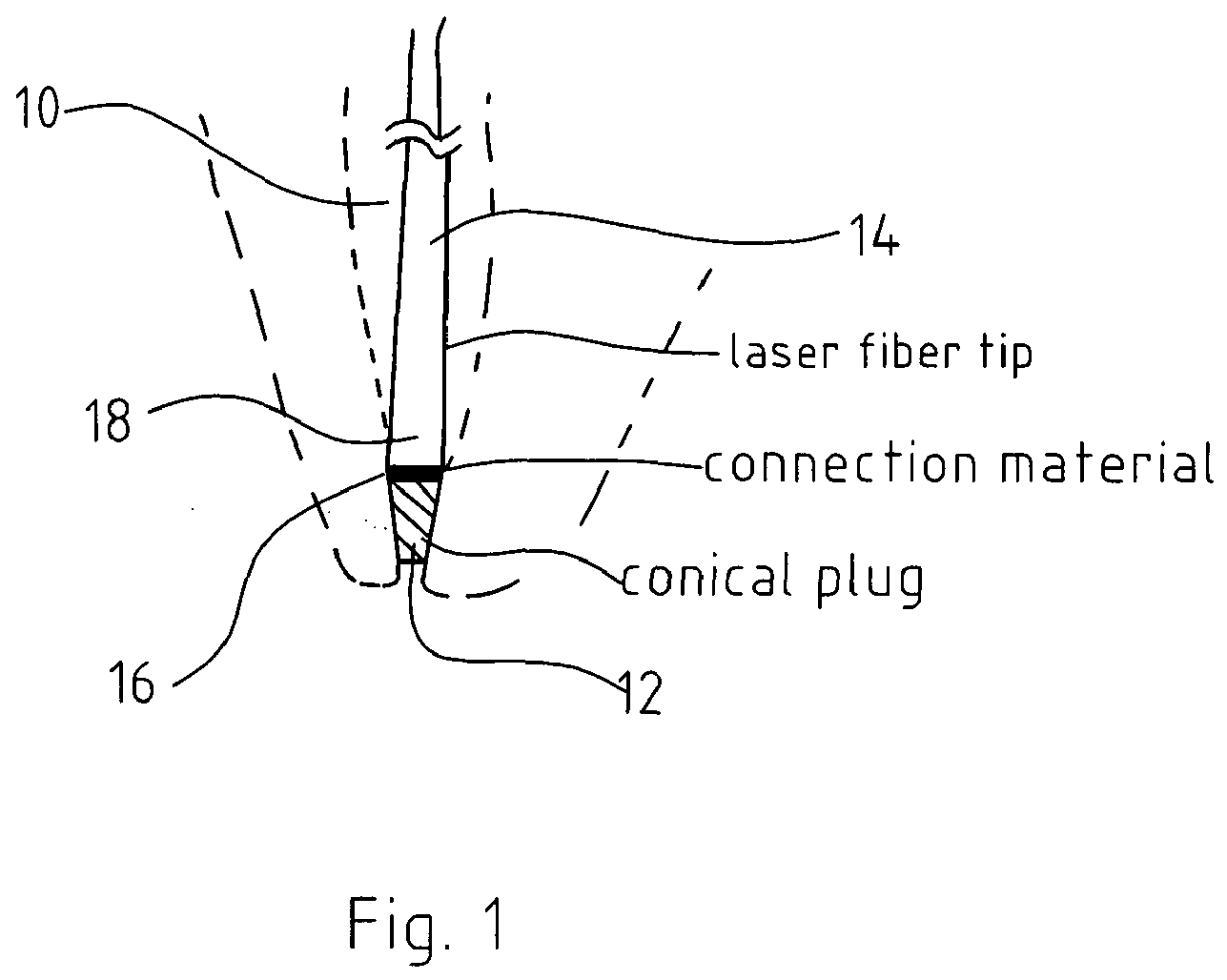 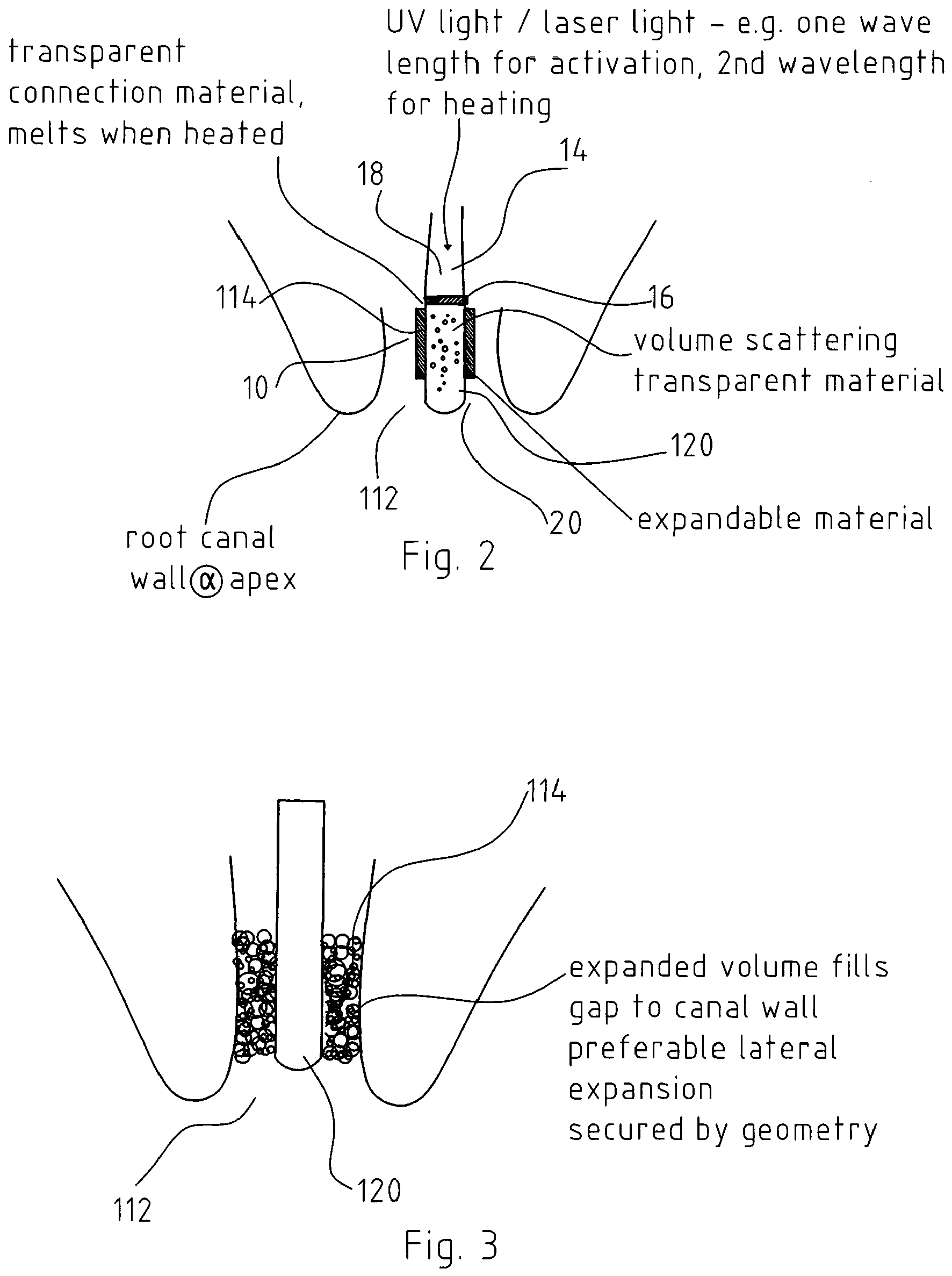 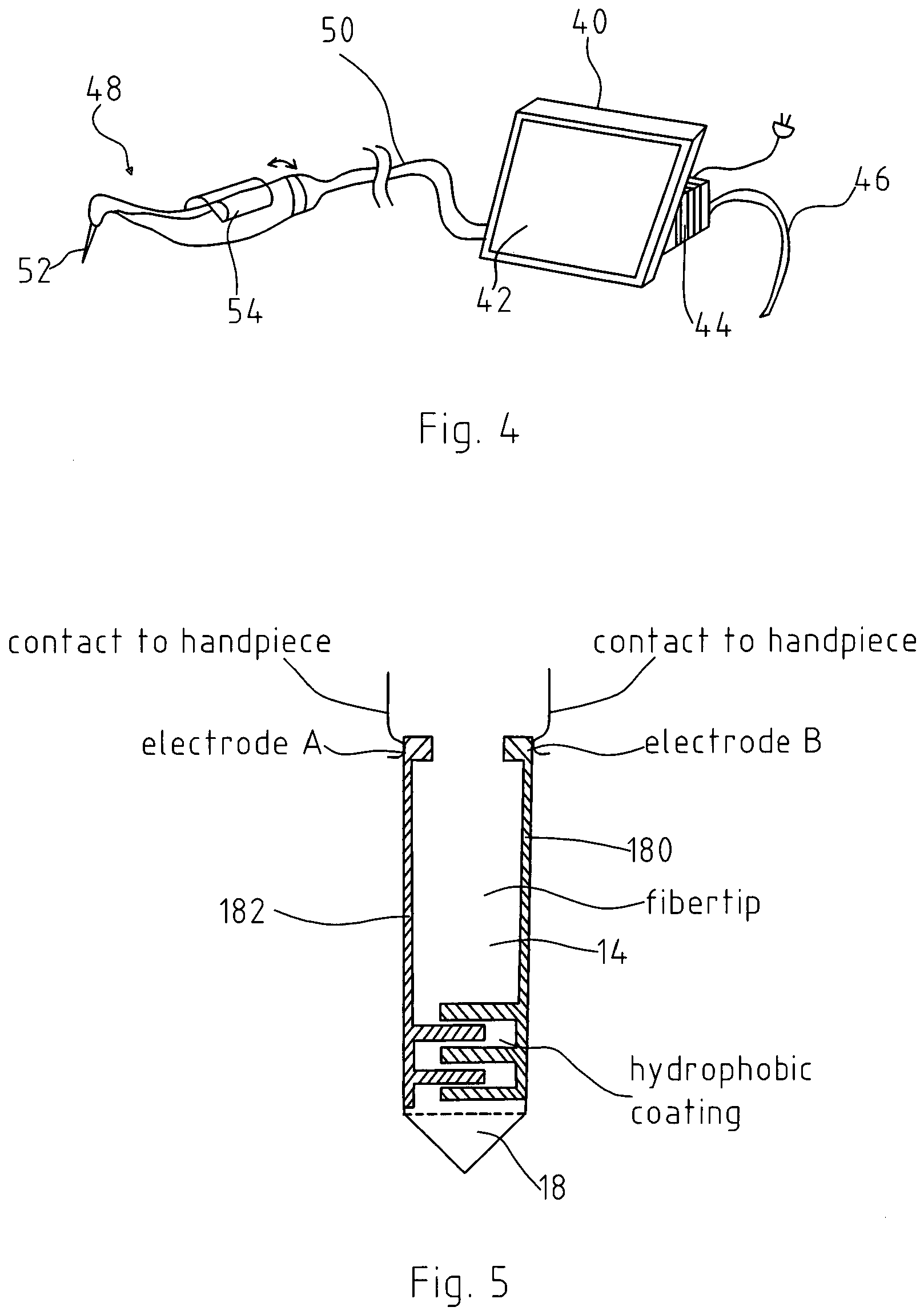 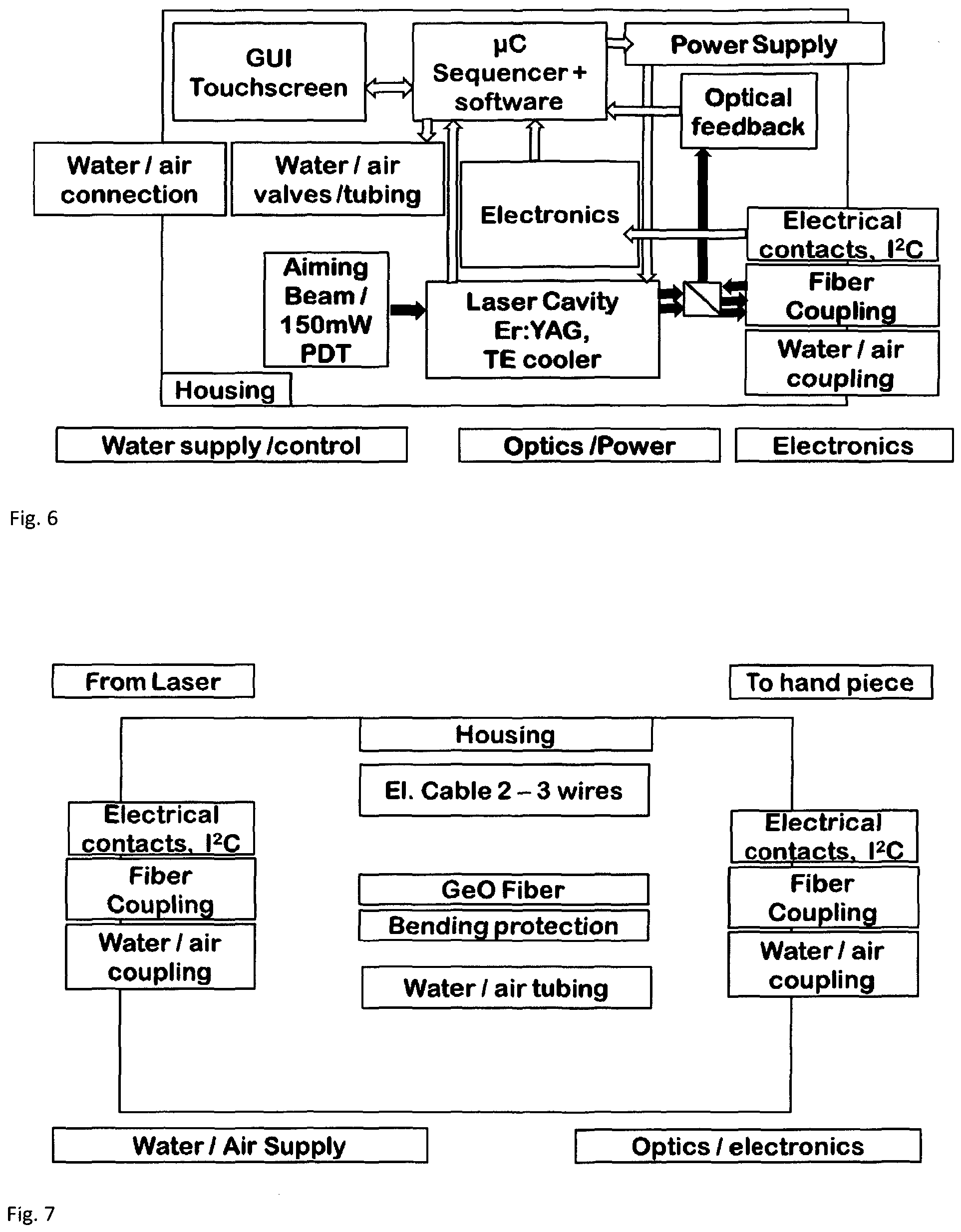 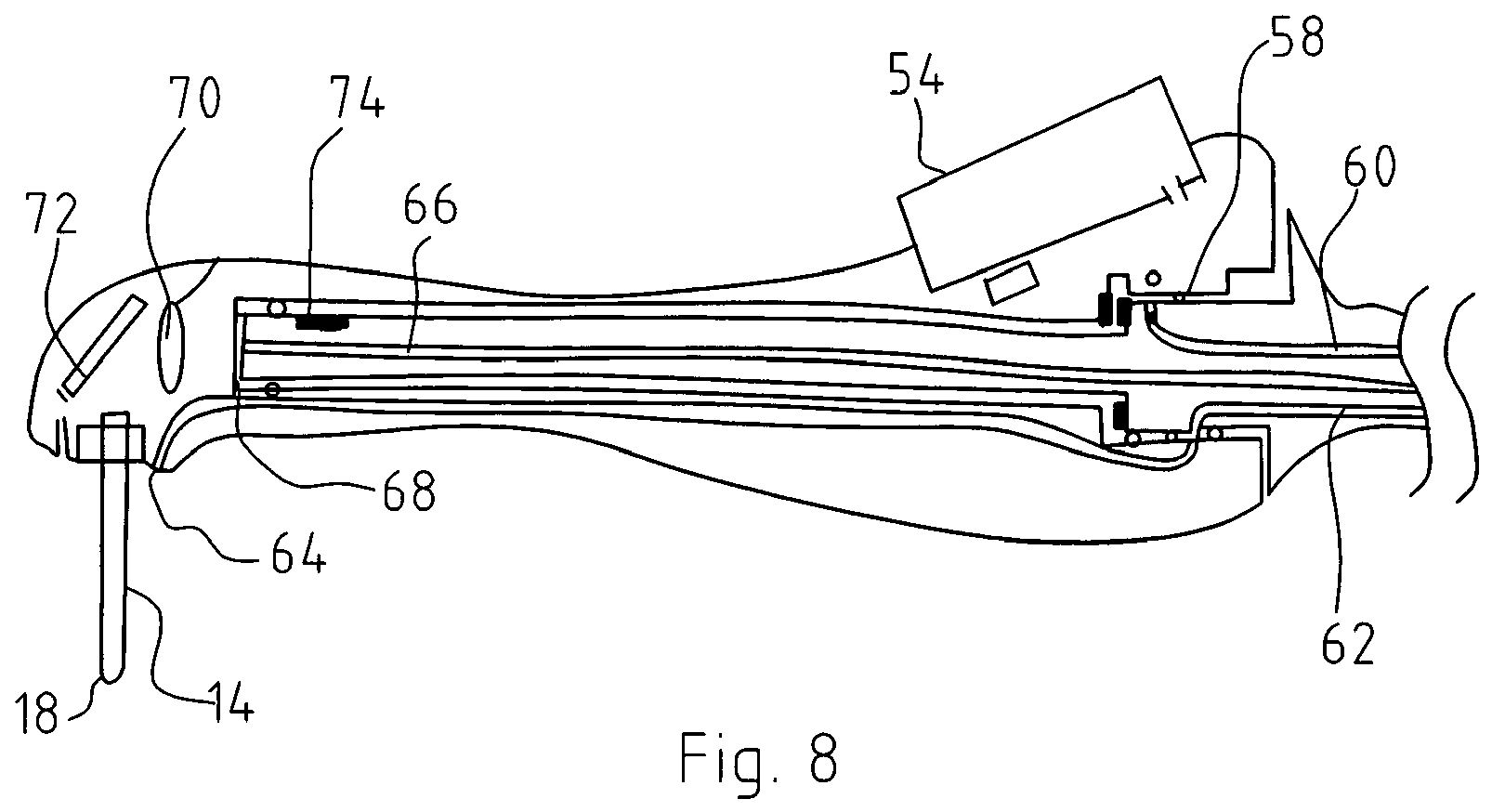 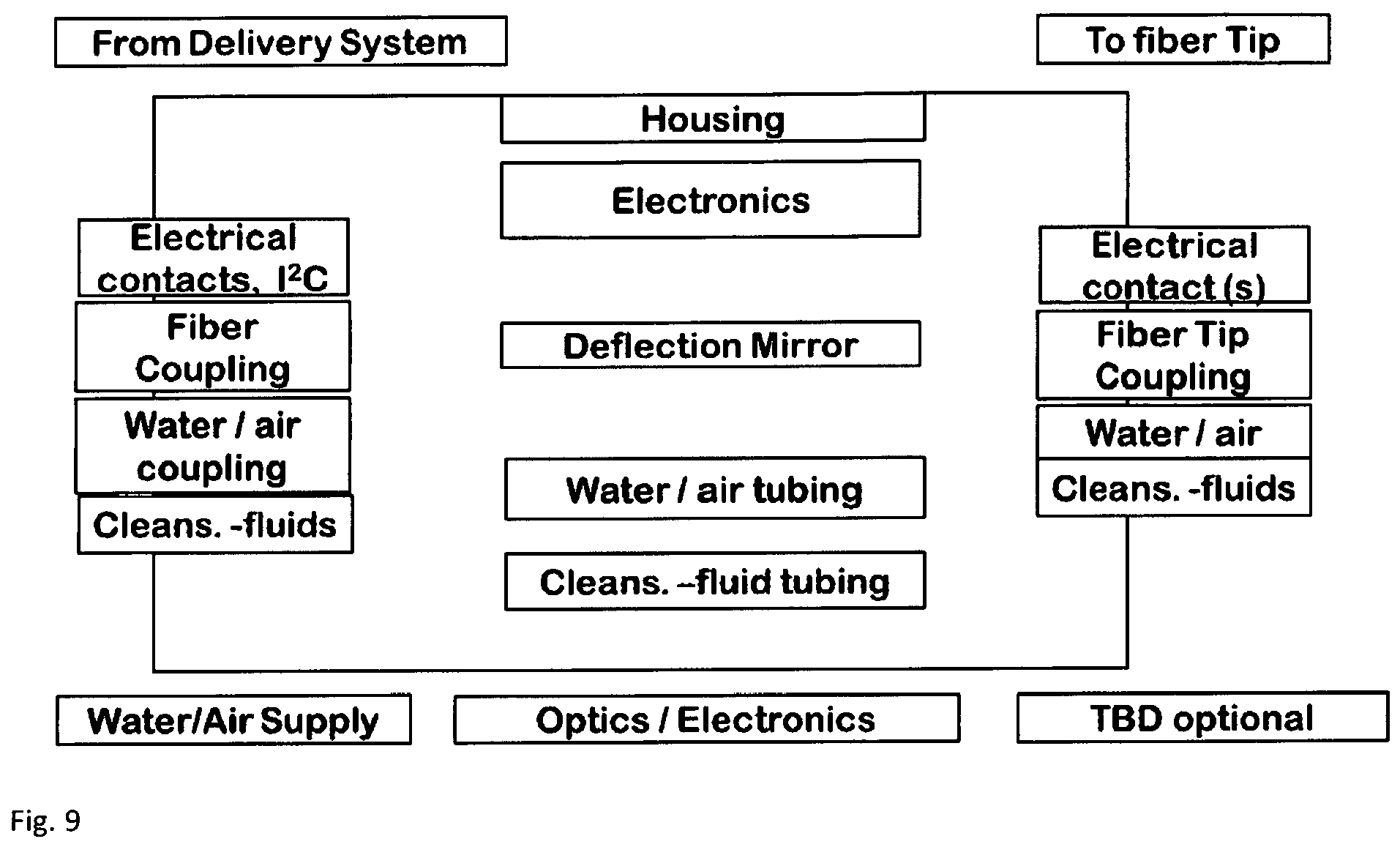 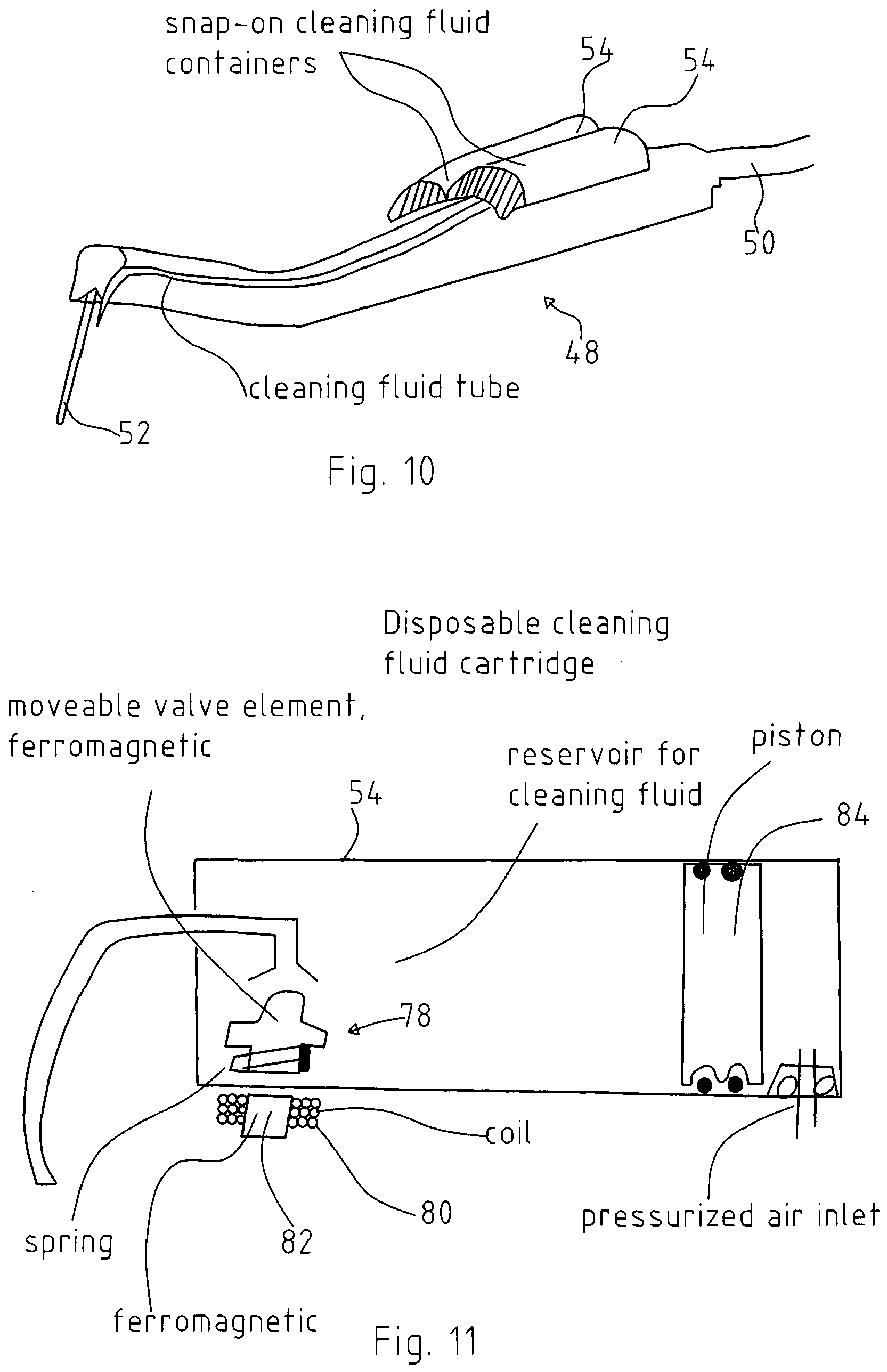 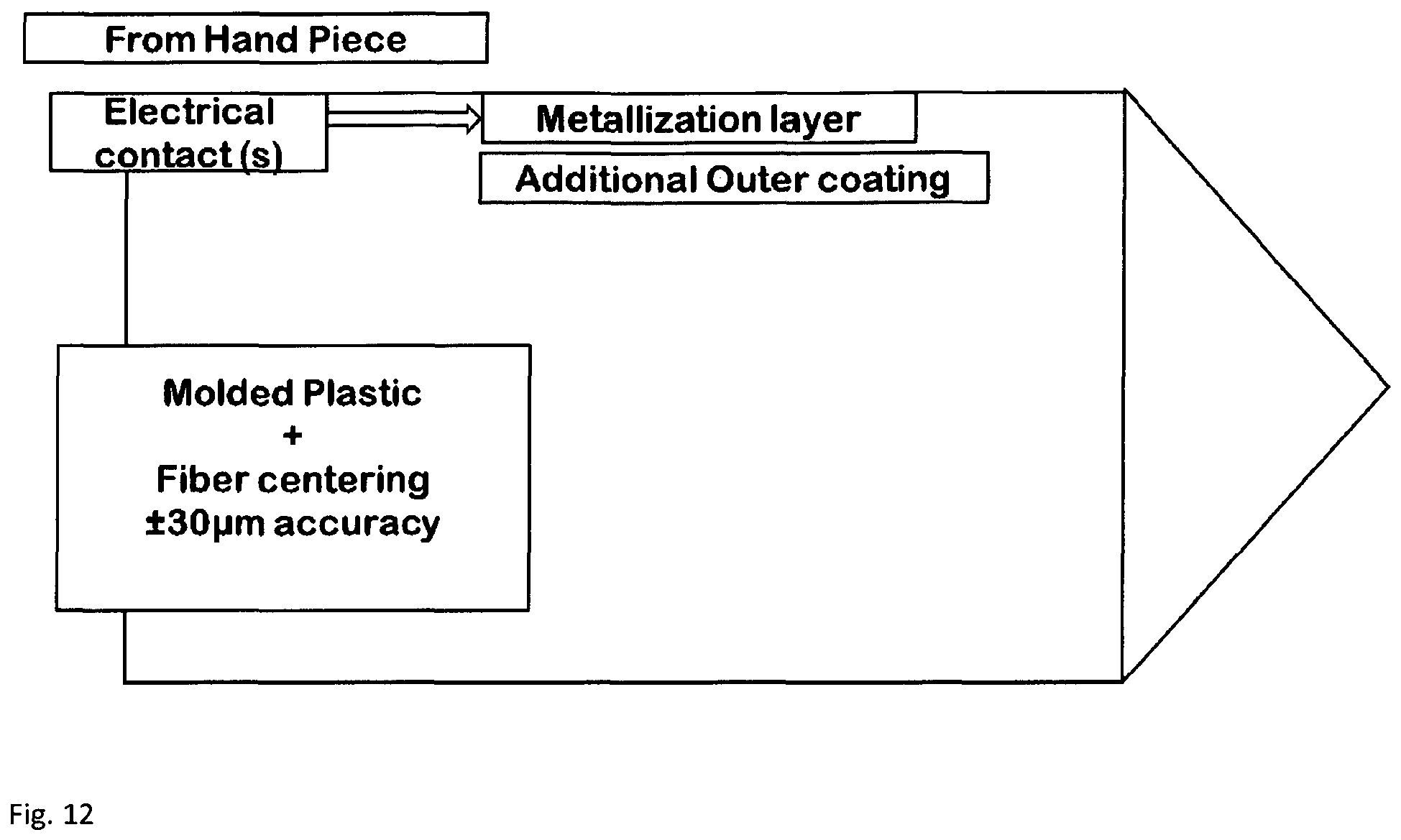