[0001] The present disclosure relates generally to computer networks, and, more particularly, to network discovery techniques for Low-Power and Lossy Networks.

[0002] Low-Power and Lossy Networks (LLNs), e.g., sensor networks, have a myriad of applications, such as Smart Grid and Smart Cities. Various challenges are presented with LLNs, such as lossy links, low bandwidth, battery operation, low memory and/or processing capability of a device, etc. Changing environmental conditions may also affect device communications. For example, physical obstructions (e.g., changes in the foliage density of nearby trees, the opening and closing of doors, etc.), changes in interference (e.g., from other wireless networks or devices), propagation characteristics of the media (e.g., temperature or humidity changes, etc.), and the like, also present unique challenges to LLNs.
[0003] Gas and water meters are common components of a Smart Grid Advanced Metering Infrastructure (AMI) network, but are also typically more limited in resources than their counterpart electric meters. In particular, gas and water meters are often battery powered, in contrast to electric meters that may be powered by the electric utility. The expected battery life of a meter is often twenty years or more, since a single service call can often exceed the cost of the meter itself. Due to the long lifetime requirement, nearly all gas and water meters use lithium thionly chloride (LiSOC12) batteries due to their low self-discharge behavior. However, these batteries are also typically expensive, meaning that many gas and water meters have limited energy resources, which places significant constraints on the operation of a meter. For example, smart gas and water meters typically do not support routing or forwarding packets generated by other devices. US-A-2013/094536 describes efficient network discovery in frequency hopping networks. US-A-2004/013166 describes hybrid frame structure for wireless communications. US-A-2013/0028295 describes collecting power outage notifications in a frequency hopping communication network.

[0004] The embodiments herein may be better understood by referring to the following description in conjunction with the accompanying drawings in which like reference numerals indicate identically or functionally similar elements, of which:

FIGS. 7A-E illustrate an example of a channel hopping sequence that uses a common channel;

FIGS. 9A-9E illustrate an example of network discovery after a power outage event; and

FIG. 10 illustrates an example simplified procedure for causing a neighbor of a device to join the network.

causing, by the device, a particular neighbor to join the network using the second channel hopping schedule (1025).

4. The method (1000) as in claim 1, further comprising:
receiving, at the device (200), a power restoration notification from the particular neighbor using the common channel.

6. The method (1000) as in claim 1, wherein the network event comprises receiving an instruction to switch channel hopping schedules.

8. The method (1000) as in claim 7, wherein the second channel hopping schedule (700) is determined by the device (200) based further in part on a deployment identifier.

receiving, at the device (200), a beacon request from a portable device via a channel of the first channel hopping schedule (600) and on behalf of one of the one or more neighbors; and

providing, by the device, a beacon using the first channel hopping schedule, in response to receiving the beacon request from the portable device.

a memory (240) configured to store instructions which, when executed by the processor, cause the processor to carry out the method (1000) according to any preceding claim.

13. A tangible, non-transitory, computer-readable media comprising instructions which, when executed by a processor (220) of a device (200), cause the processor to carry out a method (1000) according to any of claims 1-11. 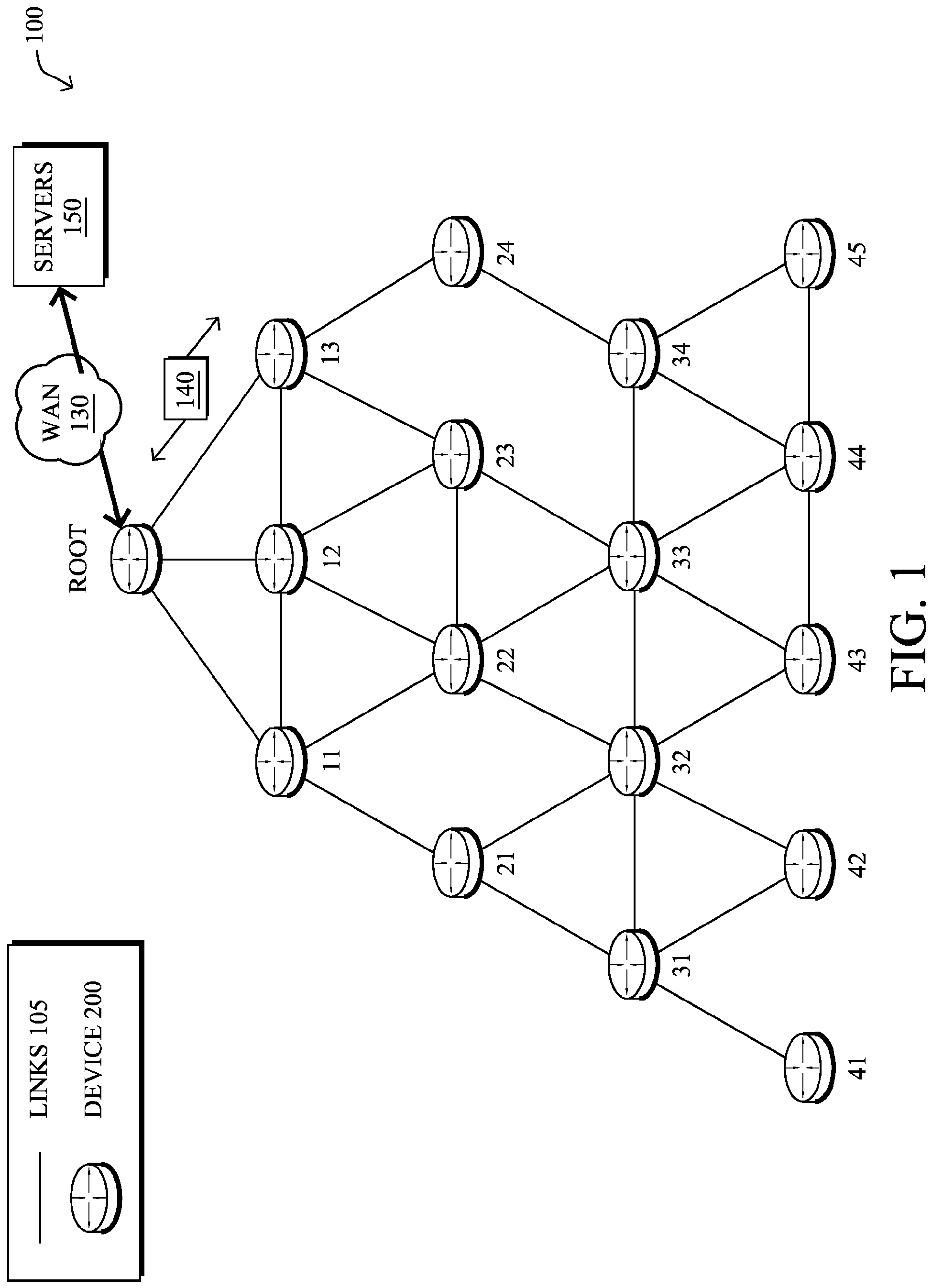 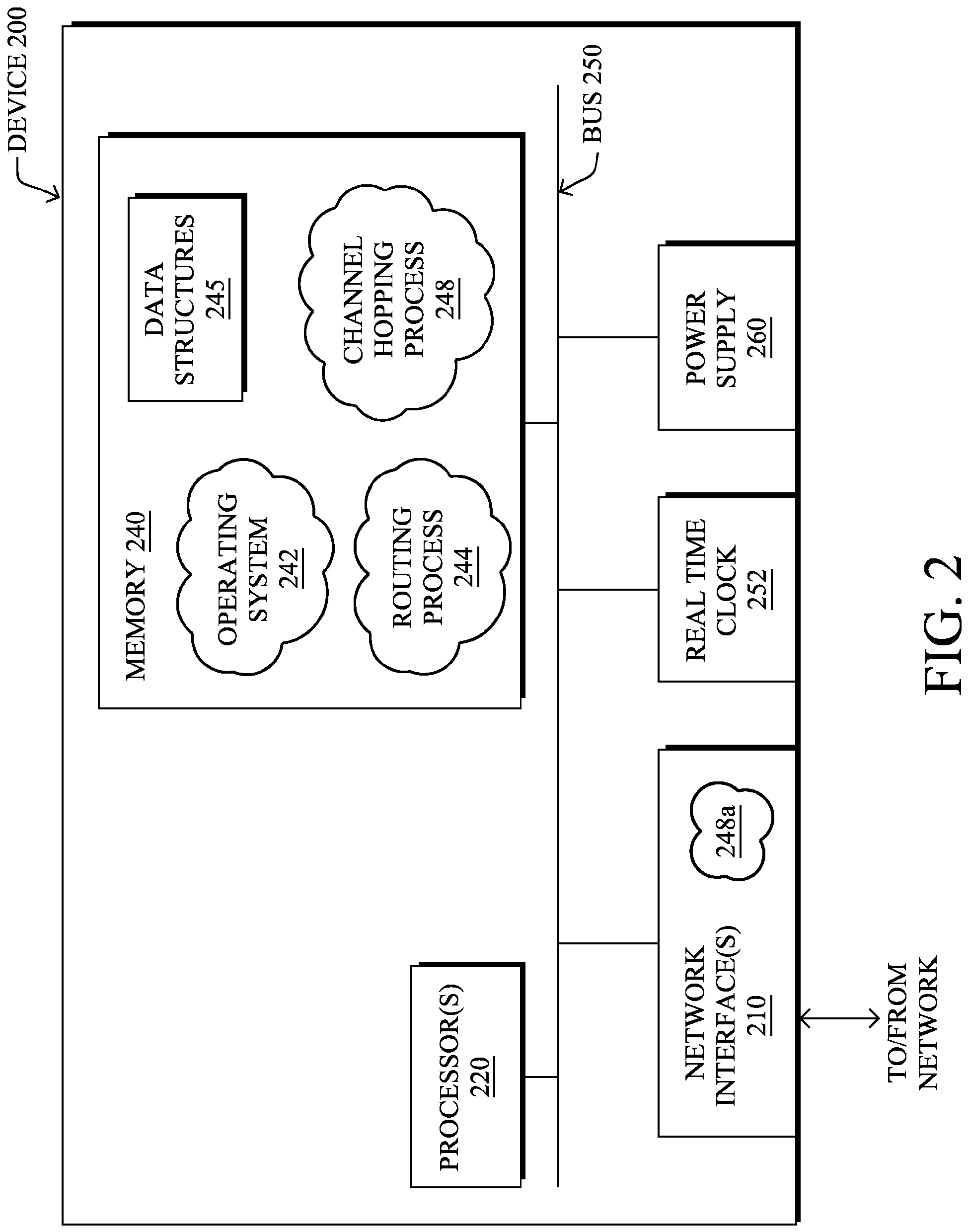 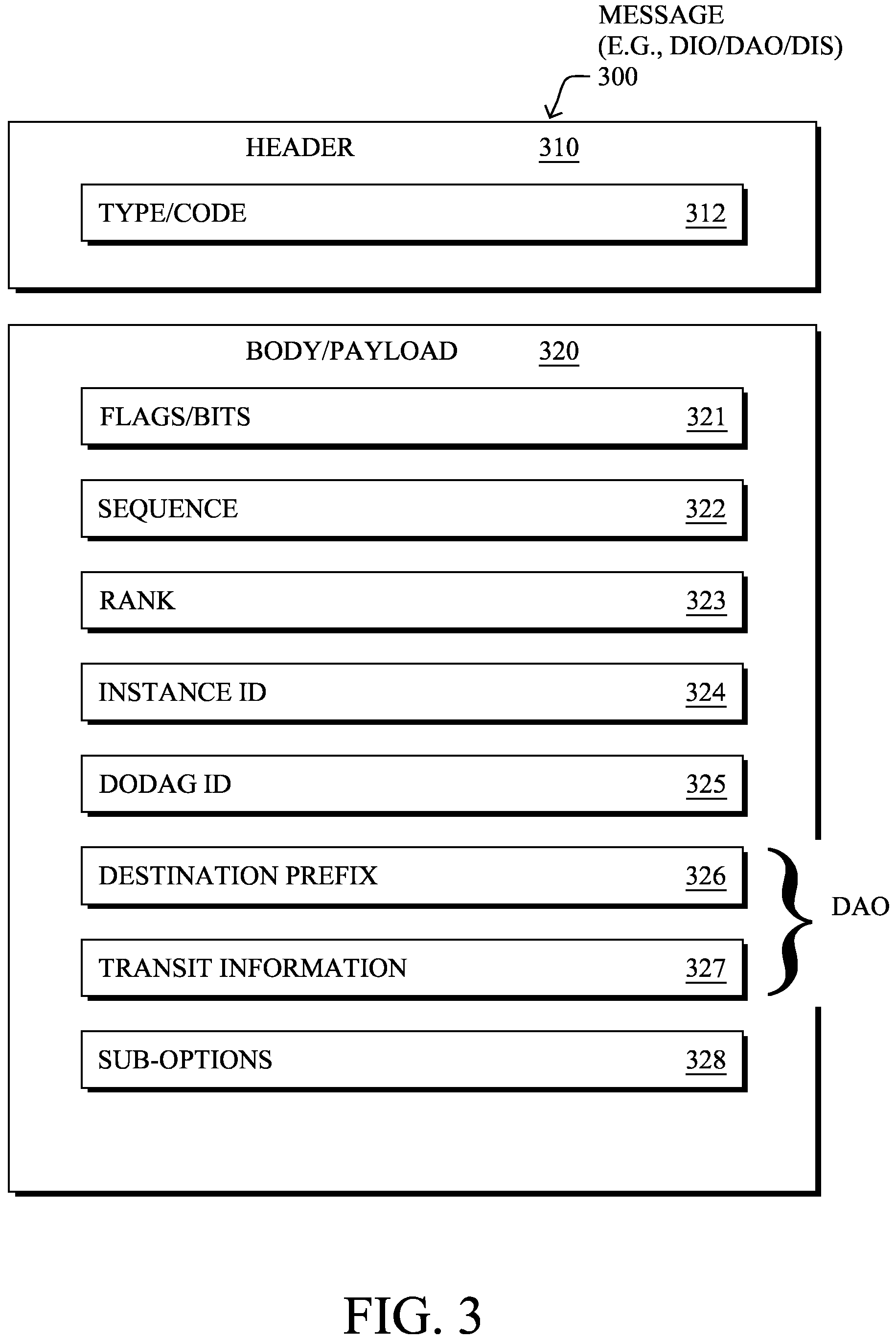 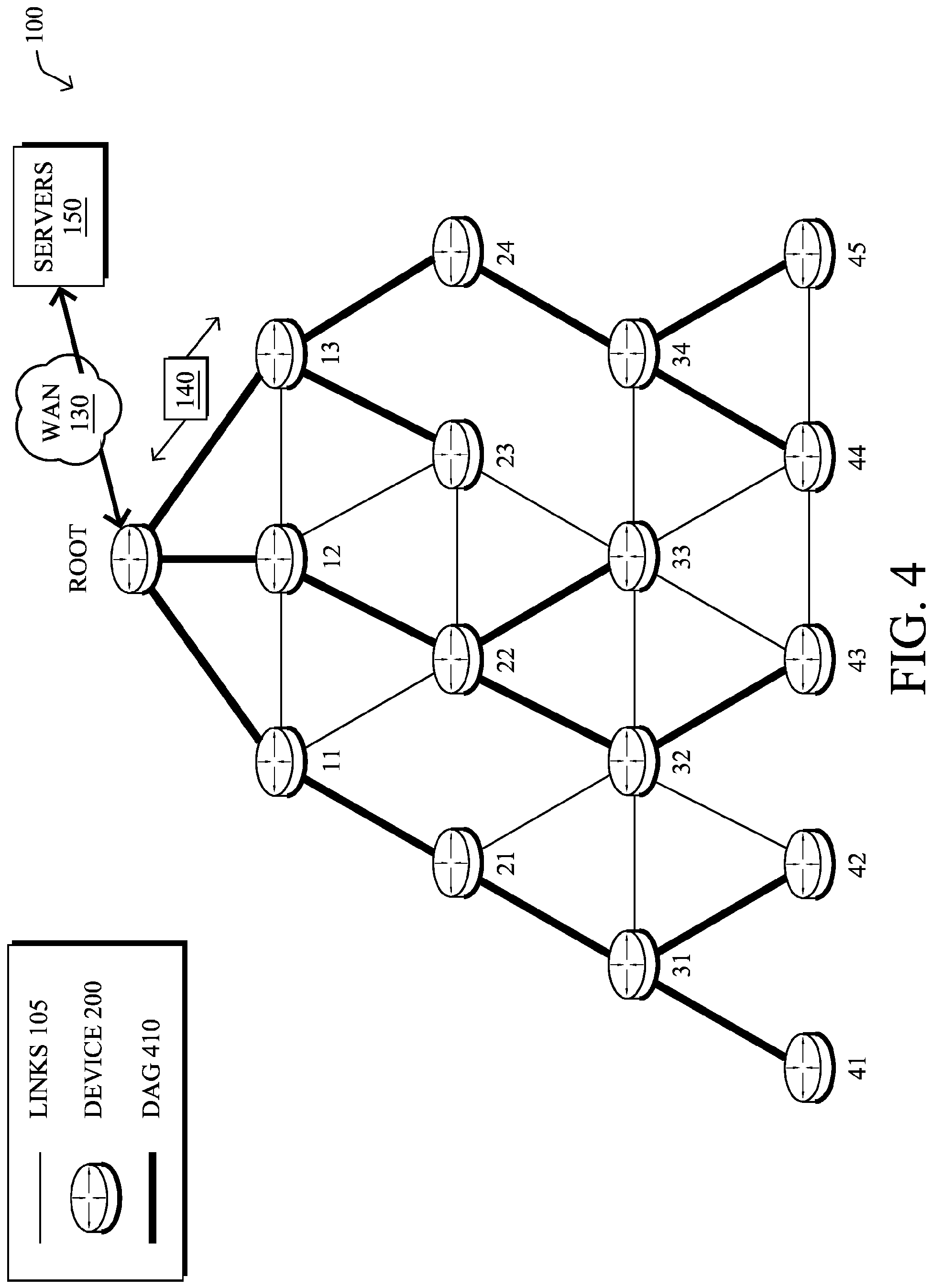 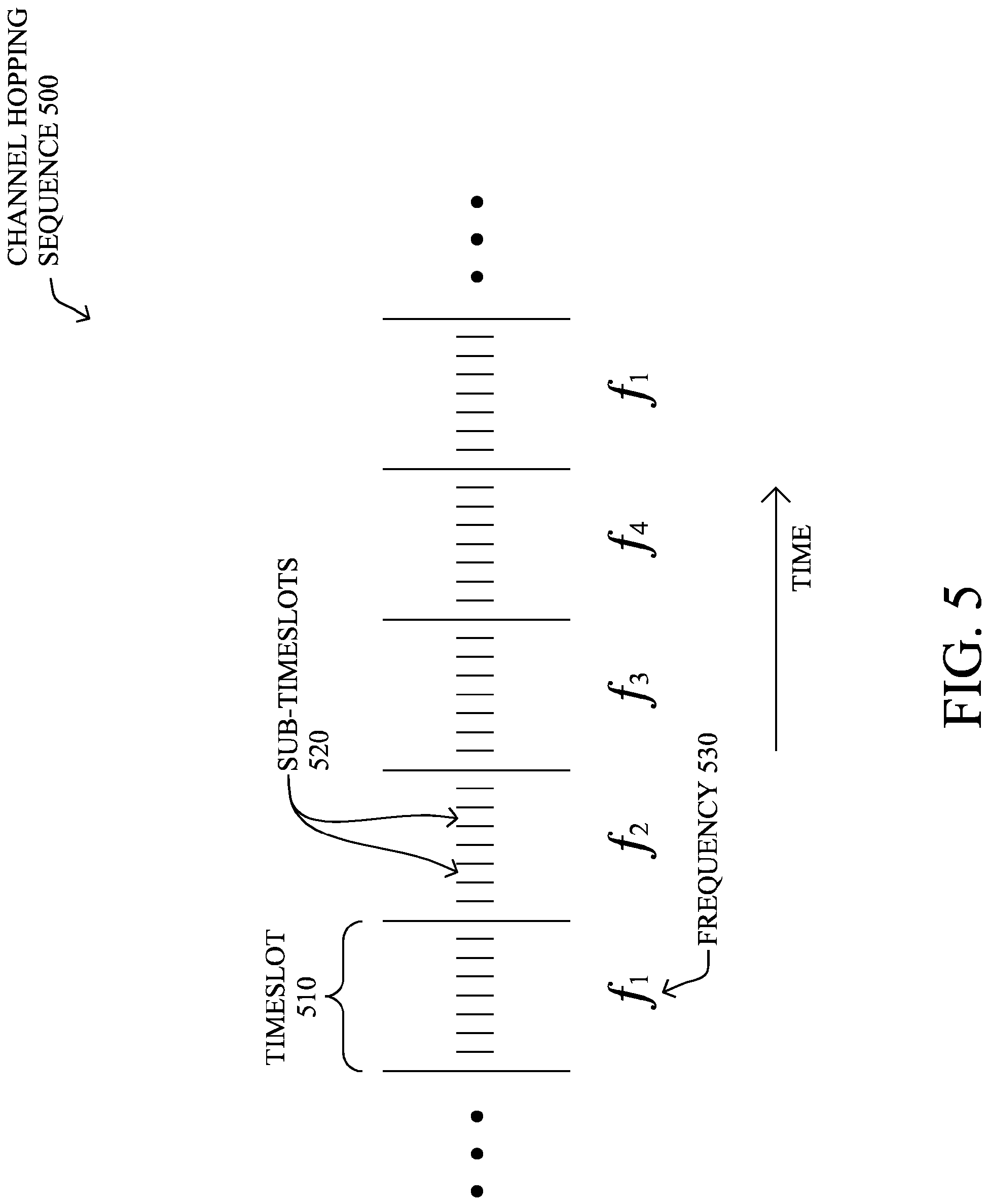 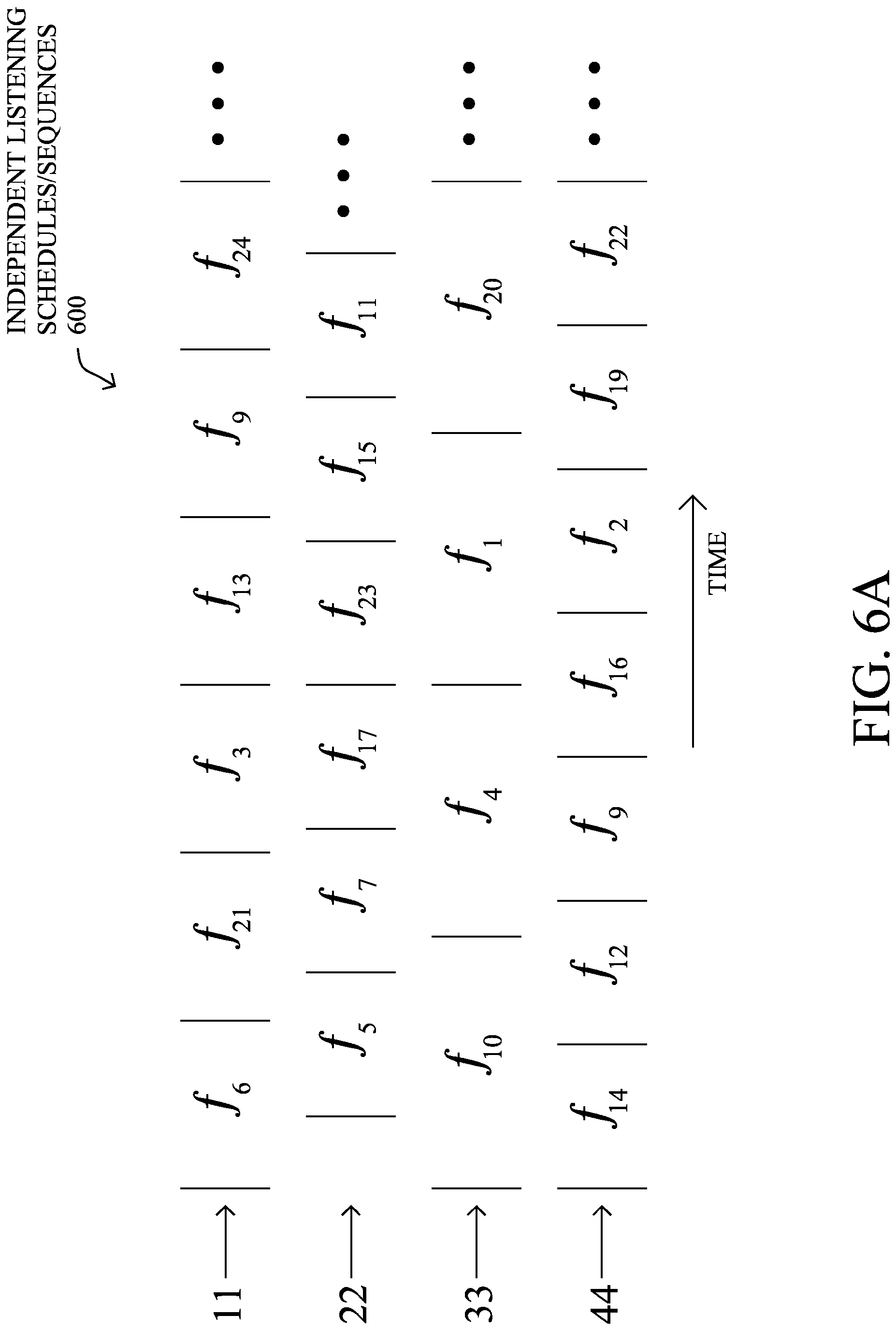 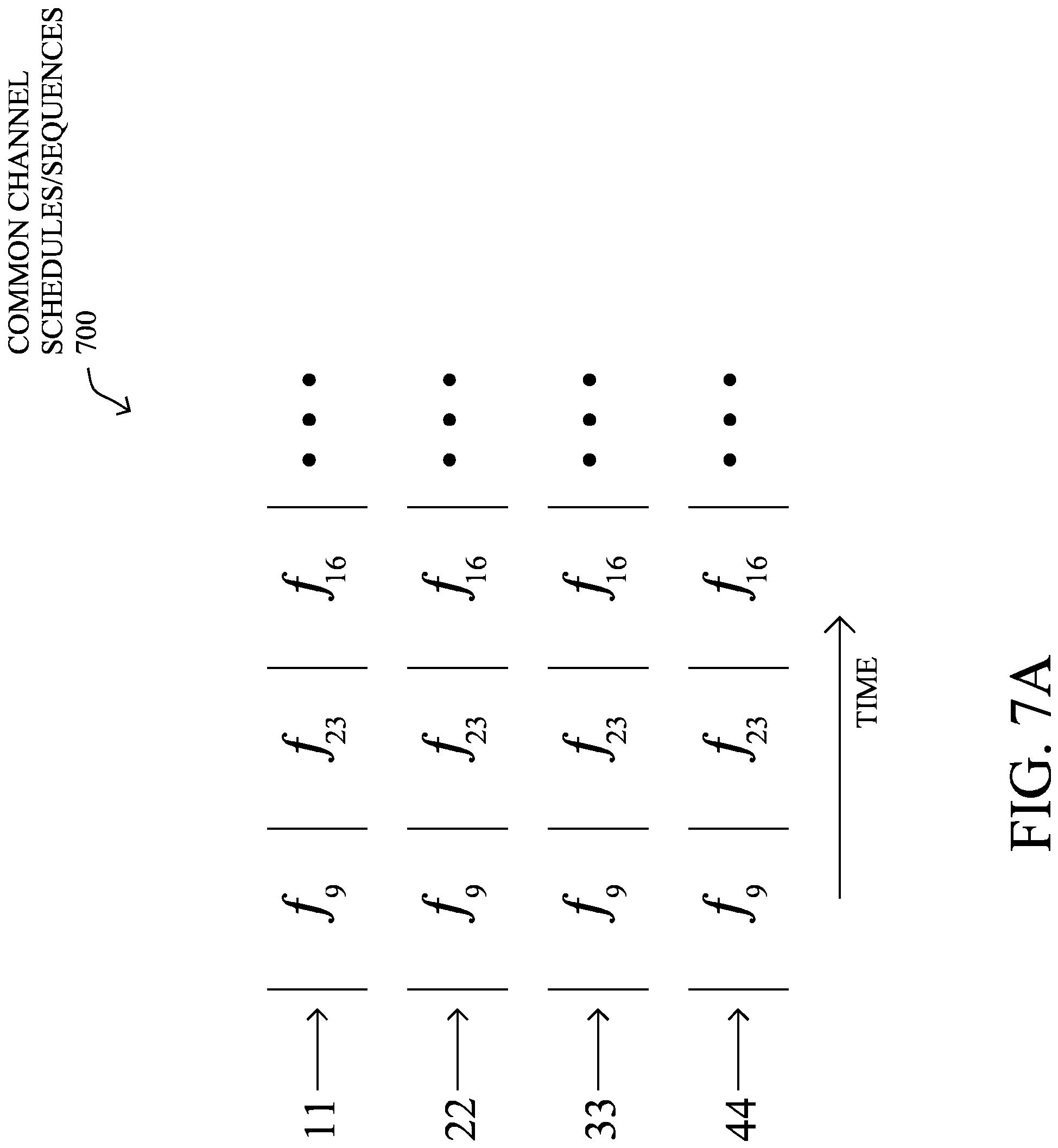 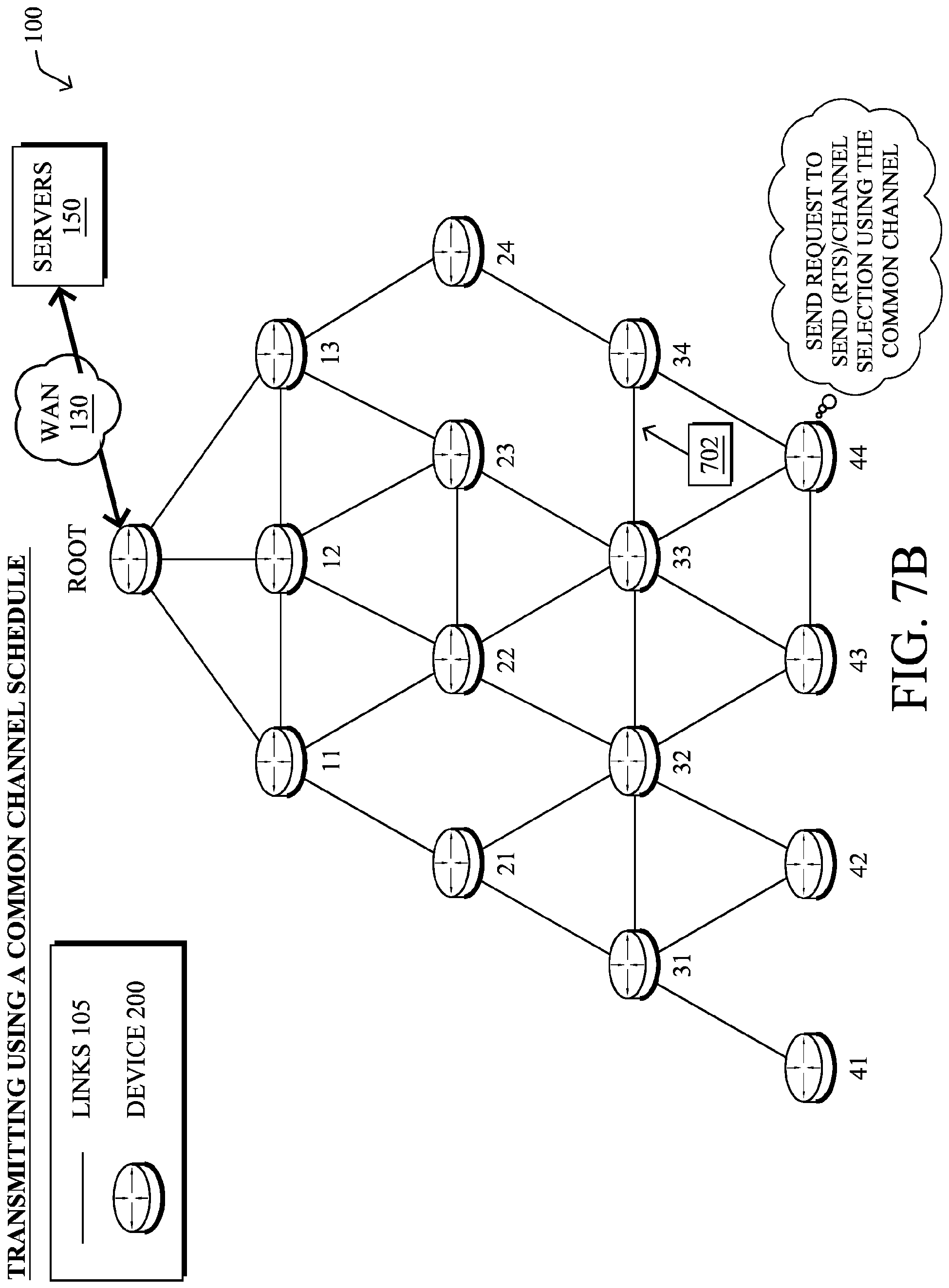 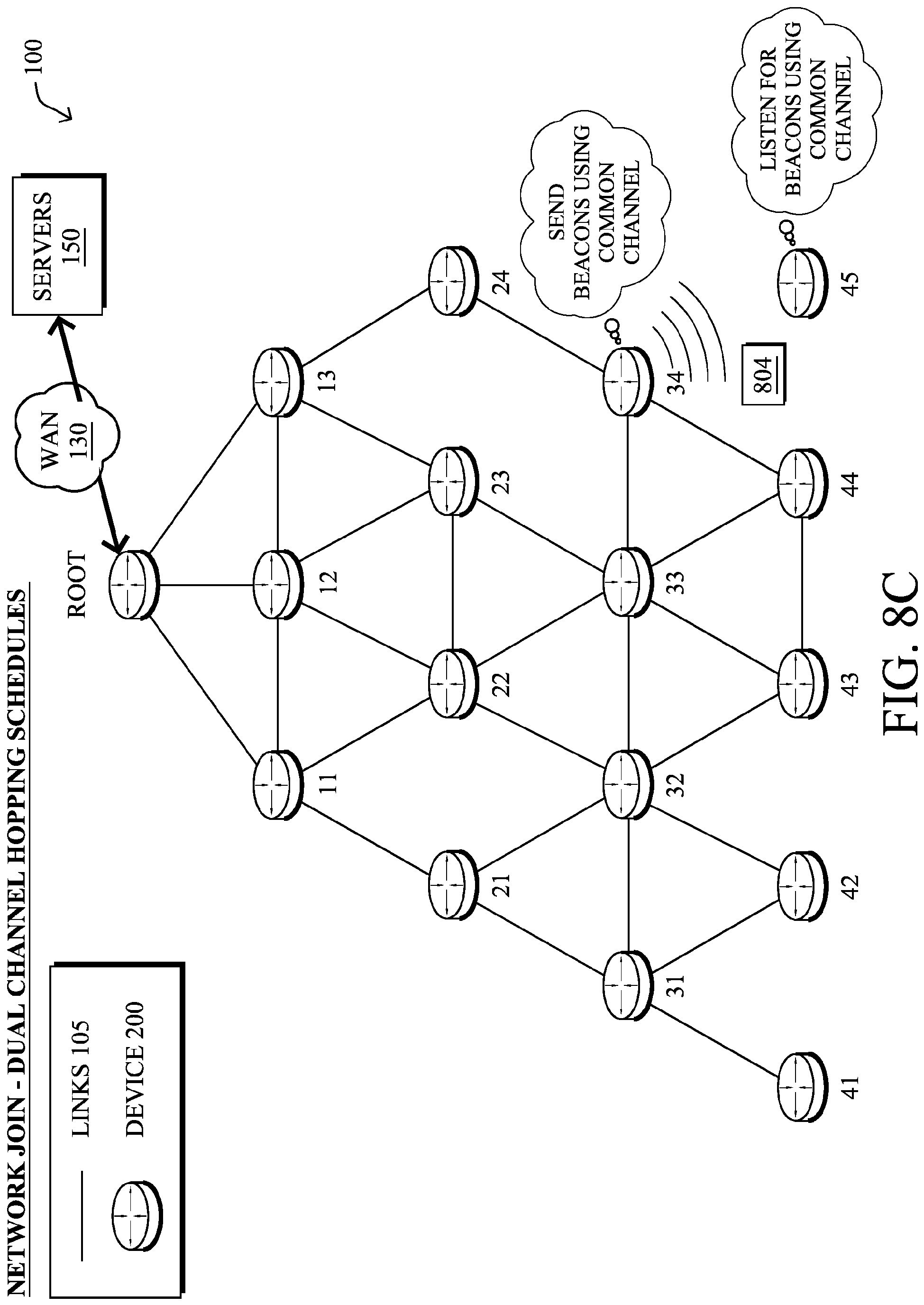 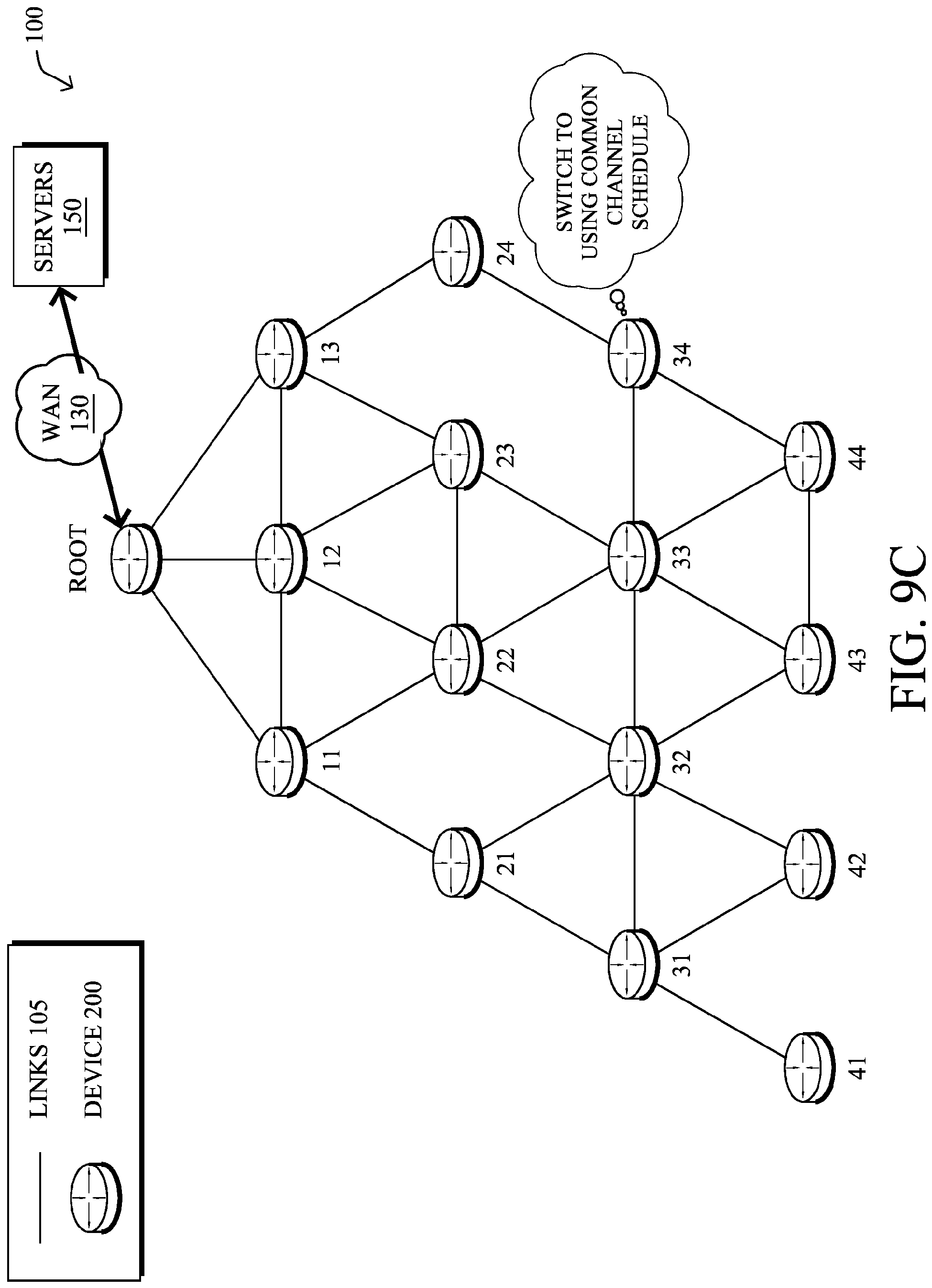 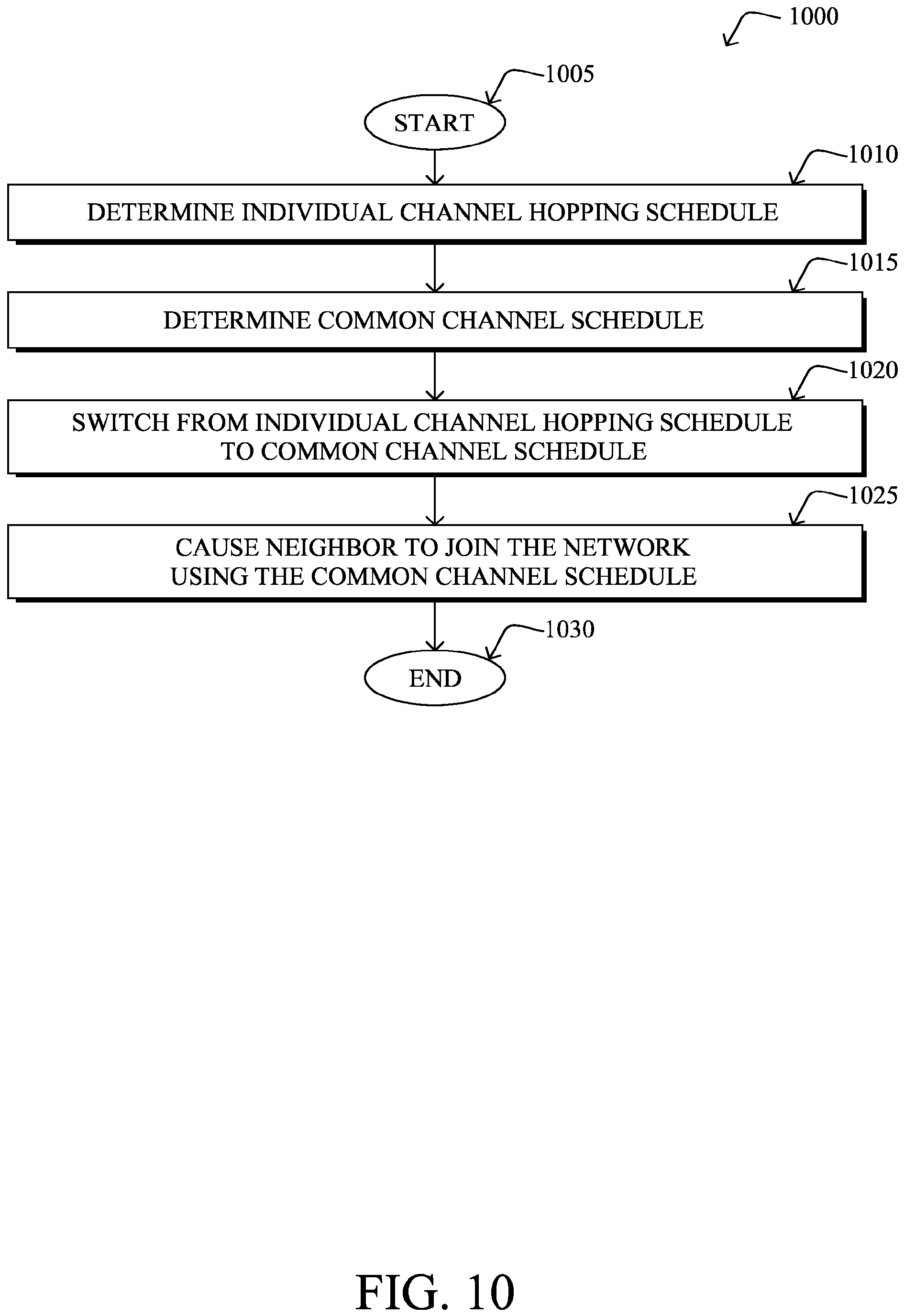