[0040] In the drawings, the reference numeral 1 indicates an electromechanical actuator for active heave compensation. In figure 1, the electromechanical actuator 1 is shown as being connected to a travelling block 2 and a suspension device 3 for the outer part 4A of a telescopic joint. The suspension device 3 is also called a riser tension ring in what follows.
[0041] The travelling block 2 is hoisted up and down by means of a hoisting winch 5. From the travelling block 2, a rotary device 6 for a pipe 7, shown here as a drill pipe, is hanging on a hook/swivel 8 and suspension rods 9. The travelling block 2 and the rotary device 6 are moved up and down along a vertical guiding device 10. The drill pipe 7 passes vertically through the rotary/diverter/upper flex-joint 12 of a drilling floor 11, the inner part 4B of the telescopic joint, the outer part 4A, a riser 13, a lower flex-joint 14, a lower marine-riser package 15, a BOP 16, a wellhead 17 and a casing 18 and, at the bottom, the drill pipe 7 ends in the drill bit 19. The drilling floor 11 is typically part of a floating installation 11A.
[0042] Figure 2 shows an active riser-tensioning system with an upper suspension 20 for the attachment of a number of actuators 1, the actuators 1 being attached at their lower ends to the riser tension ring 3. The tension ring 3 is attached to the outer part of the telescopic joint 4A (the telescopic joint 4A is not shown in figure 2). Each actuator 1 is connected to a bundle of hoses and cables 21 with a flexible suspension, which are connected to associated equipment on the floating installation 11A, among other things a power supply 46 and a control system 42.
[0043] Reference is now made to figure 4 in particular. The actuator housing 22 is arranged between an end cap 23, which constitutes a first attachment point, and a motor casing 24 to which it is attached by means of bolts 25.
[0044] The motor casing 24 includes at least an electric motor 26 with an external stator 27 and an internal rotor 28. The stator 27 fits in the motor casing 24 and is attached to this in such a way that it is prevented from moving relative to the motor casing 24.
[0045] The motor 26 is provided with one, possibly several, sets of stators 27 which are each supplied with electrical current via a respective cable 29, the cable 29 extending in a sealing manner through a respective cable bushing 30 in the end cap 31A of the motor casing 24.
[0046] An actuator nut 32 is arranged internally in the rotor 28 and is connected to this via a planetary gear 28A. The rotor 28 is supported in the radial direction by means of bearings 28B, 28C, which are arranged at the end portions of the rotor 28. The actuator nut 32 is supported in the axial and radial directions by means of bearings 33A, 33B which are arranged at the end portions of the actuator nut 32.
[0047] In this example, the actuator nut 32 is provided with a number of supported threaded rollers 34 arranged axially and distributed around a cylindrical actuation element 35. The threaded rollers 34, which are arranged to rotate freely around their own longitudinal axes in the actuator nut 32, are in engagement with external threads 36 on the actuation element 35. The actuator nut 32, the threaded rollers 34, the planetary gear 28A and the actuation element 35 thereby constitute the transmission element for transmitting power from the motor 26 to the actuation element 35, which is provided with a second attachment point 37 at the outer end.
[0048] The motor casing 24 is provided with a first cooling jacket 38 encircling the stators 27. The inflow and outflow of a cooling medium are not shown. A second cooling element 39 is placed internally in the cylindrical actuation element 35. The cooling element 39 and the inflow and outflow of a cooling medium are not shown.
[0049] The motor casing 24 will typically be certified for use in a hazardous area. For example, the Exp principle is used. The motor casing 24 is purged with protective gas before start and pressurized with clean air or inert gas during operation. Possibly, liquid is used. The inside of the motor casing 24 is then defined as a safe zone. The end cap 31A is provided with a port for air supply 40 and a port 41 for measuring overpressure in the motor casing 24.
[0050] The motor 26 is provided with at least two independent position indicators, not shown, which, via connection and signal processing in a control system 42, give information on the relative position of the actuation element 35 in the actuator 1.
[0051] The internal portion of the actuator housing 22 constitutes a guide for the actuation element 35 and is provided with supporting sleeves 43 and spacer pipes 44.
[0052] The motor casing is provided with supporting sleeves 45A, 45B at either end for the actuation element 35.
[0053] The actuator may be provided with an electronically activated brake 47, which keeps the riser in a hoisted position after disconnection.
[0054] The systems are connected via flexible hose and cable connections 21 to associated equipment providing signal communication, the power supply 46, the control system 42, a cooling medium, a lubricating medium and compressed air.
[0055] The power supply to the actuators will be supplemented with a battery pack (not shown) supplying current for active motor operation and storing electrical energy which is generated through regenerative braking with the motors 26 when the floating installation 11A is lifted up.

1. A method of heave compensation between a floating installation (11A), which has a drilling floor (11), and at least a riser (13) or a pipe (7) extending down towards, possibly through, a blowout preventer (16), wherein the method includes the steps of

- installing an active riser-tensioning system with an upper suspension (20) for the attachment of a number of electromechanical actuators (1) with attachment points, in the form of an end cap (23) and an anchoring point (37), between the floating installation (11A) and a riser tension ring (3) for the riser (13) or the pipe (7), the riser tension ring (3) being attached to an outer part of a telescopic joint (4A), each actuator (1) having a housing (22), the housing (22) being arranged between a respective end cap (23) and a motor casing (24), the motor casing (24) including at least an electric motor (26) with an external stator (27) and an internal rotor (28), the stator (27) fitting in the motor casing (24) and being attached thereto in such a way that it is prevented from moving relative to the motor casing (24);

2. The method according to claim 1, wherein a riser (13) extends down towards a blowout preventer (16), wherein the method further includes the steps of

- controlledly brake recoil of the riser (13) when disconnecting said riser (13) from the blowout preventer (16);

- hoisting said riser (13) to an upper position; and

- locking said riser (13) in the upper position by the electronically controlled engagement of a brake (47).

3. The method according to claim 1, wherein the method further includes the step of 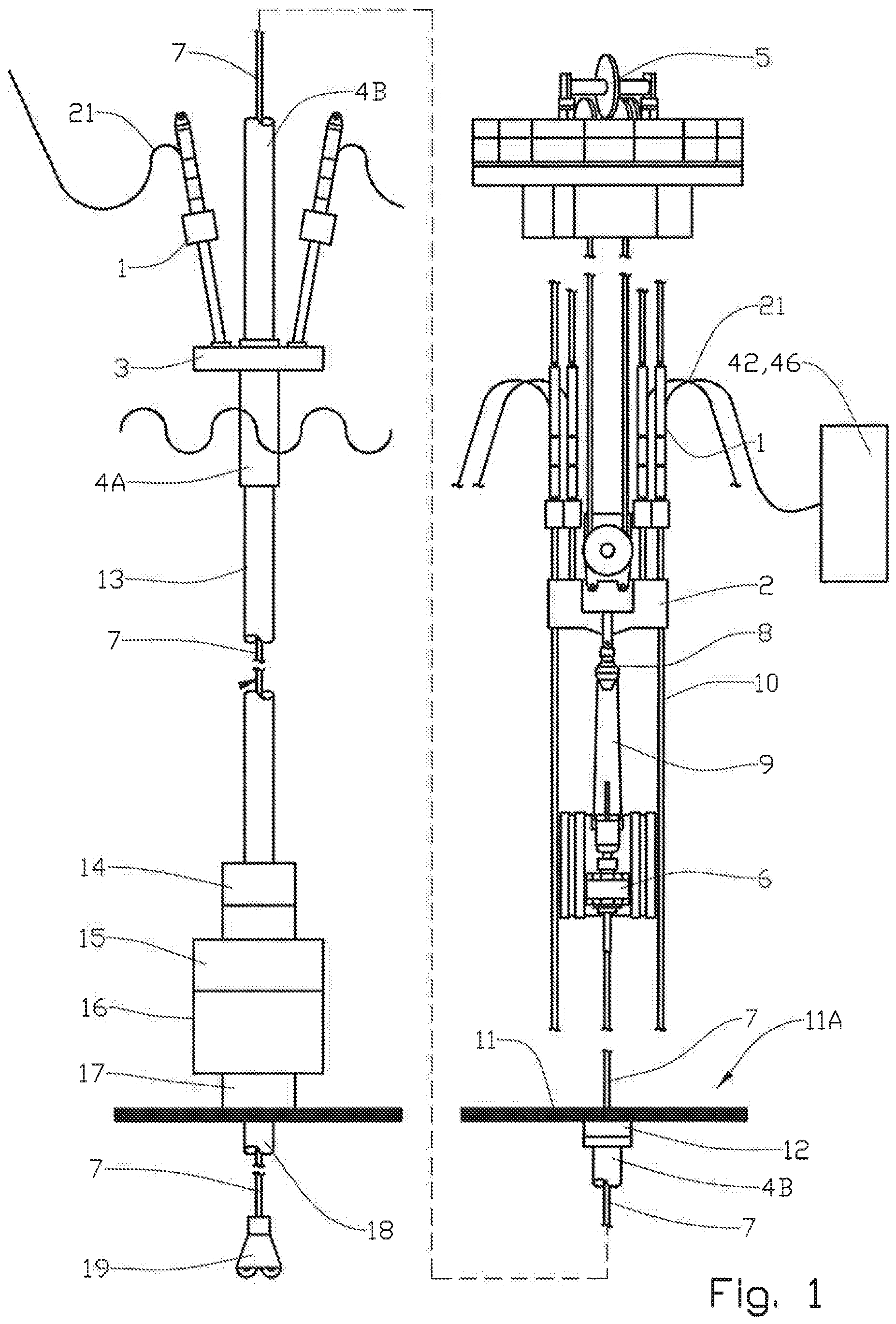 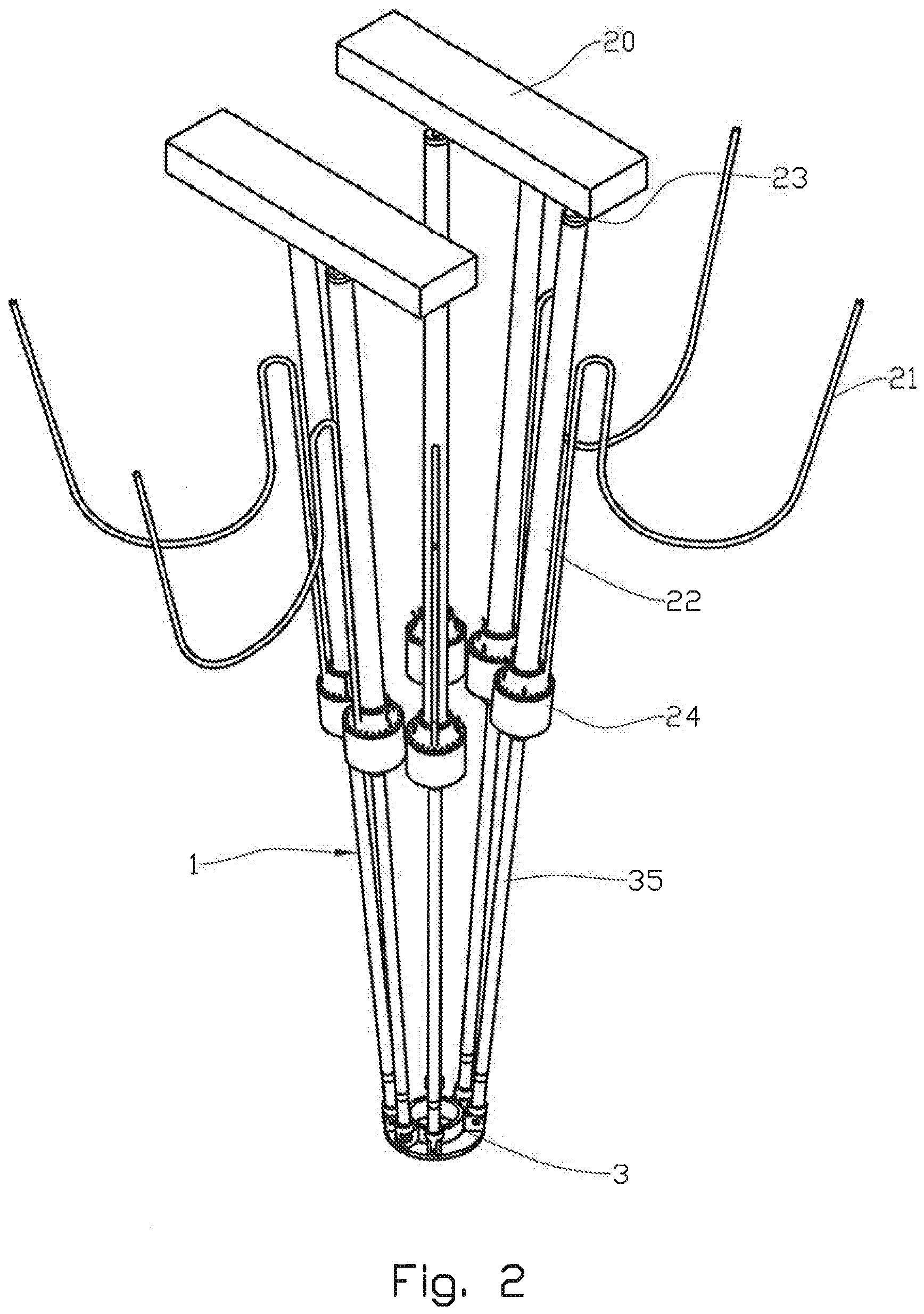 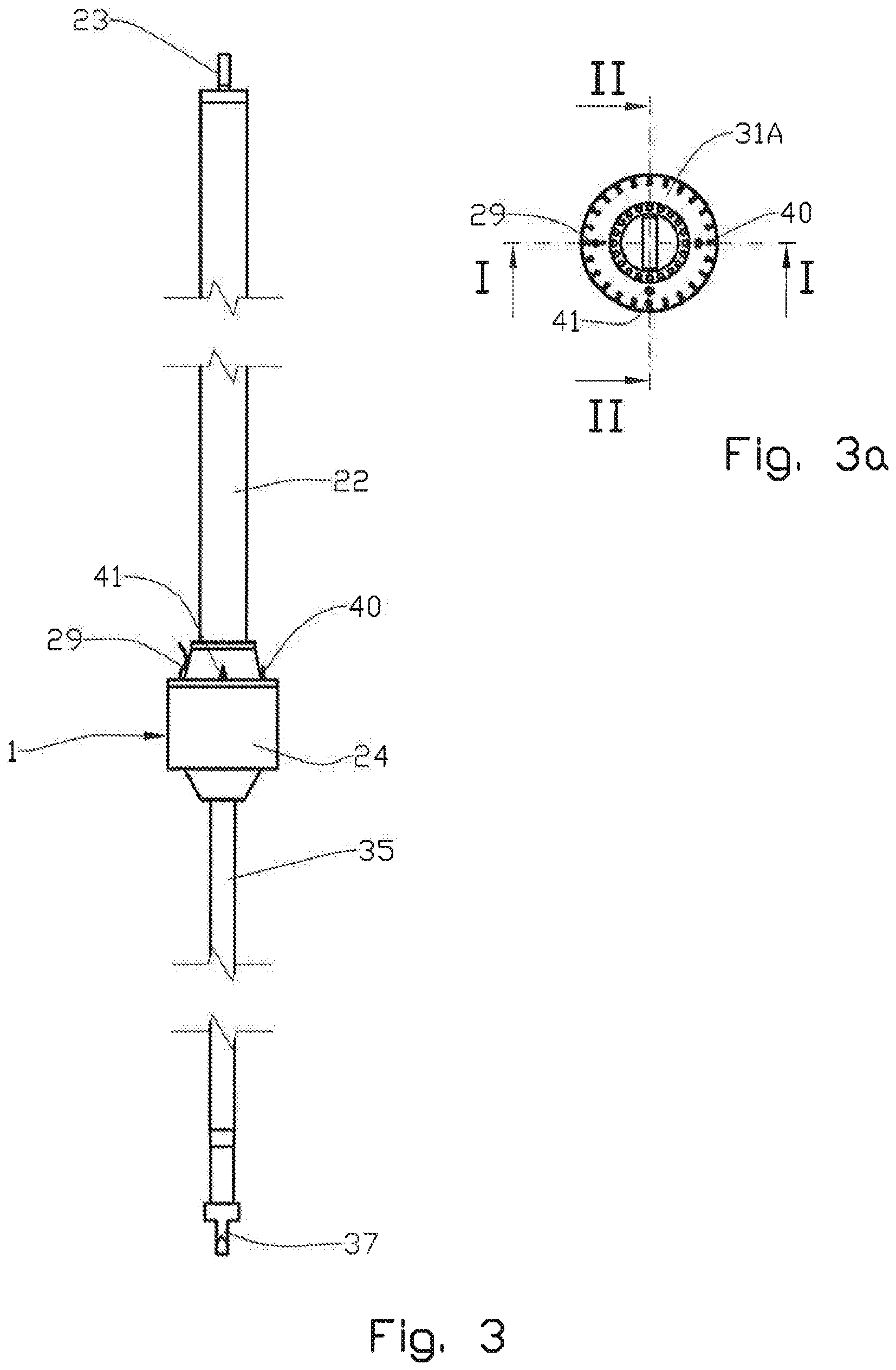 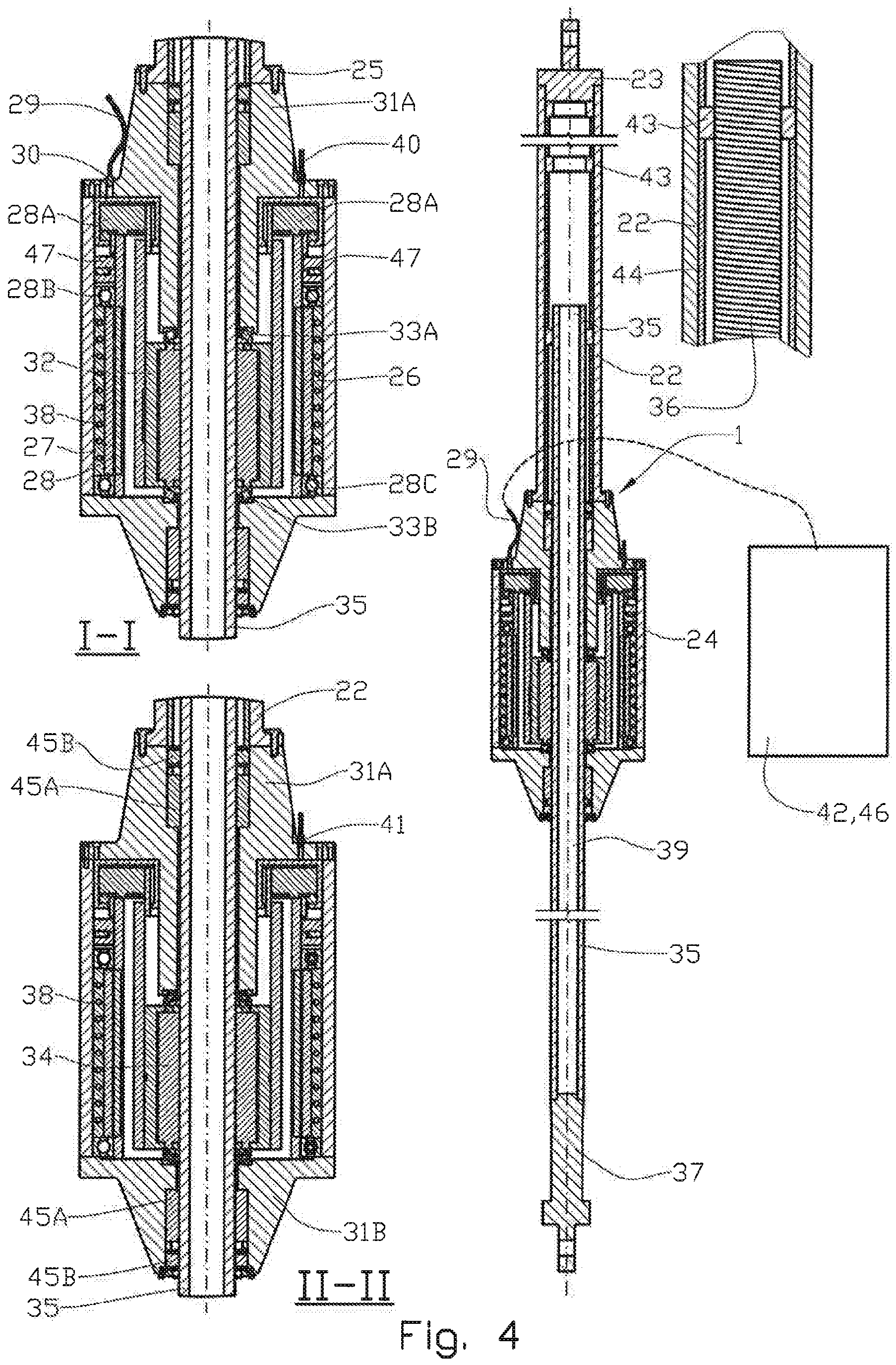