[0001] The present invention can be applied to the security field and relates, in particular, to the field of anti-theft and anti-tampering systems.
[0002] More in detail, the present invention relates to an anti-theft and/or anti-tampering protection system, particularly, but not exclusively, suitable to be coupled to electrical or electronic systems such as, for example, automatic payment systems or cash dispensers.

[0003] The protection of objects from theft has become a more and more evident issue over the years and techniques related to it have been strongly developed. The aim is to provide increasingly effective anti-theft or anti-tampering systems that are cost-effective and easy to implement at the same time.
[0004] Known systems generally comprise a logic control unit to which one or more sensors, suitable to detect the object conditions, are associated, in order to signal anomalies that generally correspond to theft or tampering attempts. Alarm means, often consisting of one or more sirens, or one or more flashing lights, or other, are then associated to the same logic control unit.
[0005] In some cases, there are also appropriate connections for deleting sensitive data from local databases. For example, as for automatic payment systems or cash dispensers, local memories exist that contain users' confidential information and which, in the event of tampering or fraudulent removal of the payment system, ought to be immediately deleted.
[0006] The used sensors are the most diverse. For example, optical sensors are known, consisting of a light emitter and a receiver in order to create an optical barrier whose interruption means attempted theft, and magnetic sensors consisting of a magnet located next to a magnetic switch whose displacement means attempted theft. If automatic payment systems are involved, however, they are typically constituted by a mechanical switch that detects if the system itself is in contact with a fixed wall. The change of state of this contact corresponds to system removal which, if fraudulent, triggers the alarm state.
[0007] In any case, as a general rule, any type of sensor for detecting theft or tampering attempts is connected to a switch, which is normally either open or closed and whose change of state means alarm.
[0008] The typically known protection systems are connected to the power supply of the apparatus or object that they must protect. Since the power supply may be temporarily unavailable, they often include a battery. In some cases, however, the device to which the protection system is connected may supply little electricity for the operation of the protection system, which must therefore be substantially autonomous. Even in this case, in the known art, the problem is solved by using batteries.
[0009] However, known systems have some known drawbacks that compromise their functionality in certain situations.
[0010] A first drawback is that the battery has a limited life time and must therefore be regularly replaced. Moreover, it is bulky and generally heavy. However, rechargeable batteries are often used, but these need a special recharging circuit that not only takes up space, but also takes time to charge the batteries and often has unacceptable levels of electrical consumption.
[0011] All this affects not only the size of the protection system, but also production and maintenance costs.
[0012] Documents US 5,075,670 A, GB 2 038 399 A, US 4,295,132 A, US 2012/139558 A1, GB 2 233 486 A are known. They do not solve the underlined drawbacks. In particular, some of them use a capacitor as antitheft indicator. However, when the systems are powered off, they lose the status indication because the capacitors discharge.

Presentation of the invention

[0013] The present invention aims, at least, at partially overcoming the above-mentioned drawbacks by providing an anti-theft and anti-tampering protection system which is capable of detecting theft or tampering attempts, even if power supply is interrupted.
[0014] An additional aim is to make a protection system available, whose size, footprint and weight are optimized for it to be easily integrated into any device.
[0015] Another additional aim is that the operation of the protection system must not undergo periodic maintenance such as, for example, the replacement of batteries.
[0016] An additional aim is that the protection system consumes less power than the known systems.
[0017] Such aims, as well as others which will become clearer below, are achieved by an anti-theft and anti-tampering protection system according to the following claims, which are to be considered as an integral part of this patent.
[0018] In particular, it includes at least one electric accumulator, which will discharge rapidly if the system is tampered with. In this sense, it comprises at least one rapid discharge electrical circuit of the same accumulator and at least one actuator to activate such discharge electrical circuit if the system is subject to theft or tampering.
[0019] In other words, the accumulator integrated in the system of the invention is a rapid discharge accumulator, so that its charged/discharged state indicates that a theft or a tampering attempt was made.
[0020] Since it is the charged state of the accumulator which indicates that a theft or a tampering attempt was made, it is clear that the same accumulator needs a small charge and, therefore, not only the charging process is just as fast, but its energy absorption is also very limited and lower than the known equivalent systems.
[0021] Typically, but not necessarily, such an accumulator comprises a condenser, in such a way that the use of one or more batteries involving the above-mentioned drawbacks is not necessary.
[0022] According to one aspect of the invention, the protection system also includes at least one electrical circuit replicating the charged and discharged states, which is operably connected to the accumulator. Such replicating electrical circuit has a very high input impedance (tending to infinity) on the connection to the accumulator, so as to substantially isolate the accumulator both when the replicating electrical circuit is powered and when it is disconnected.
[0023] In other words, the replicating electrical circuit allows the rapid discharge accumulator to advantageously retain its charged/discharged state in case of power failure. Typically, electrical circuits tend to have parasitic resistances or inductances, which are enough to allow a discharge process of capacitors in a few minutes or seconds, especially if no power is supplied. The circuit of the invention, on the other hand, prevents this from happening by substantially isolating the accumulator, thereby limiting the energy absorption from the outside even more.
[0024] According to another aspect of the invention, the replicating electrical circuit comprises at least one MosFet-type transistor, whose gate is operatively connected to the accumulator. Since one of the main features of such a transistor is to have an almost infinite input impedance on the gate, this advantageously allows to achieve the above-mentioned electrical isolation.
[0025] Still advantageously, the simplicity of the chosen electrical components makes it possible to obtain a small, easy to assemble and low energy consumption protection system. It is thus easy to integrate in essentially any known device.

[0026] Further features and advantages of the invention will be more evident in light of the detailed description of some preferred, but not exclusive, embodiments of an anti-theft and anti-tampering protection system according to the invention, illustrated by way of a non-limiting example with the aid of the accompanying drawings, wherein:

- at least one electrical accumulator (2) designed to discharge rapidly at least in the event of any theft or tampering attempts on the system (1);

- at least one rapid discharge electrical circuit (3) of said accumulator (2);

- at least one actuator (5) to activate said discharge electrical circuit (3) of said accumulator (2) in case said system (1) is tampered with;

3. Protection system according to claim 1 or 2, wherein said accumulator (2) comprises at least one capacitor (4).

4. Protection system according to any one of the preceding claims, wherein said actuator (5) comprises at least one mechanically actuated switch.

5. Protection system according to any one of the preceding claims, wherein said discharge electrical circuit (3) comprises at least one resistor (6) operatively connected to said actuator (5) and said accumulator (2) so as to obtain, when said actuator (5) is activated, a closed circuit in which a discharge electrical current of said accumulator (2) can circulate, even if said protection system (1) is not supplied.

6. Protection system according to any one of the preceding claims, comprising at least one recharging circuit (12) of said accumulator (2).

8. Protection system according to claim 7, wherein said decoupling electrical component (13) is a diode.

10. Protection system according to any one of the preceding claims, comprising an insulating cover of at least said accumulator (2) at least to prevent access to its electrical poles in order to avoid tampering with its charge state. 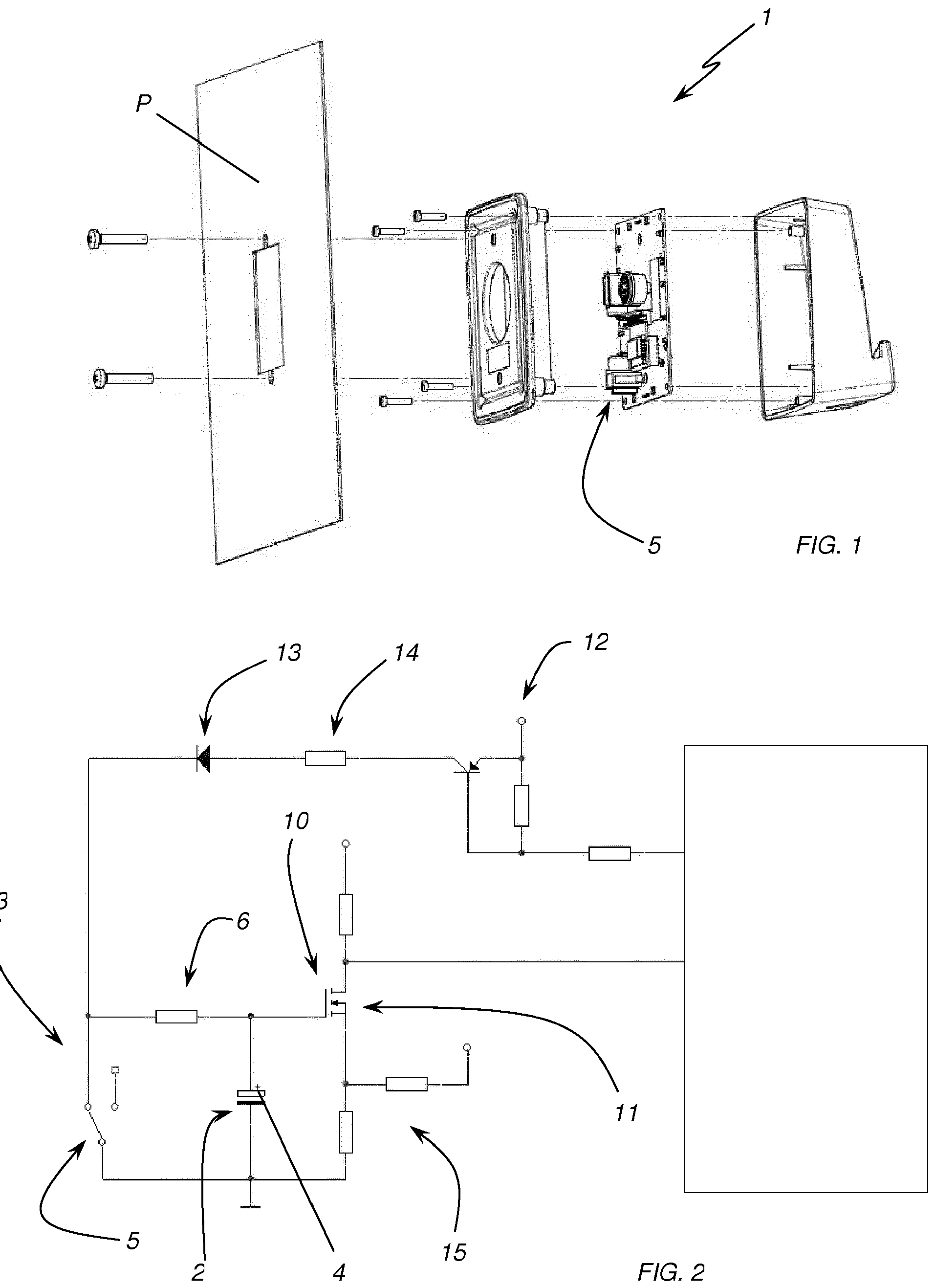 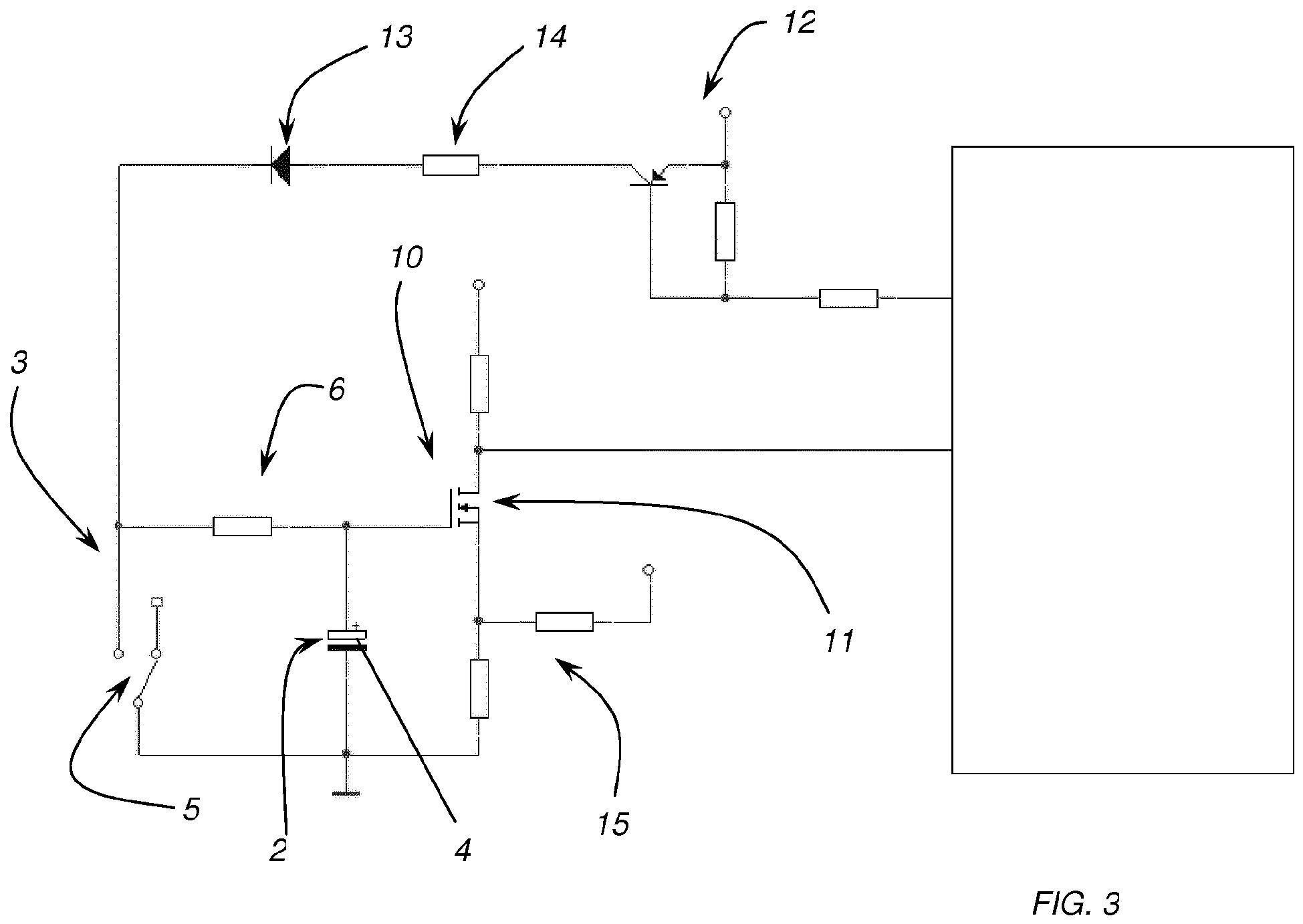