1. A device for renovation of car gearbox bearing seats, equipped with a profiled housing (7) and a cutter head (1), the cutter head comprising a front disc (2) and a mandrel (4), which is attached to, and protrudes from, the front disc (2), wherein the front disc (2) is equipped with cutting plates (22), the cutting tips of which are distributed symmetrically along a pitch circle with a first radius (R1), wherein a front face (24) of the profiled housing (7) has three through bores (26), the cutting head (1) being able to be reciprocated and driven in rotation by a hand-held power drill, characterised in that the front disc (2) of the cutter head (1) of the device is equipped with exactly three replaceable cutting plates (22), preferably multi-profiled ones, wherein the mandrel (4) is a three-step guiding mandrel (4), wherein the portion of the three-step guiding mandrel (4) proximate the front disc (2) is inserted in a sleeve (6), on which the profiled housing (7) is mounted, wherein the three through bores (26) are symmetrically distributed on a perimeter of a circle with a second radius (R2), wherein the end (8) of the mandrel remote from the front disc (1) has a section of reduced diameter on which is mounted a spacing piece (9) supported on an annular face (12) of said mandrel, wherein on a sleeve-shaped portion (10) of said spacing piece (9) a disc (13) is mounted, wherein a roller bearing (15) is mounted in an annular seat (14) of said disc (13), and wherein the roller bearing (15) is in contact with an inner projection (19) of a disc-shaped support (16), the disc-shaped support also being mounted on the end (8) of the guiding mandrel (4), the position of said disc-shaped support (16) being fixed on said guiding mandrel (4) by means of a Seeger ring (17).
2. The device according to claim 1 characterised in that the front face (2) of the cutter head (1) has the shape of a solid with profile similar to an equilateral triangle with truncated vertices (27), to which the three replaceable cutting plates (22) are detachably connected.
3. The device according to claim 1 or 2 characterised in that the profiled housing (7) has a front face disc (24) with a profile similar to an equilateral triangle with truncated vertices and below said vertices, the profiled housing (7) is provided with the through bores (26), wherein along its axis of symmetry, it is provided with a two-step through bore (27), including a front bore (28) with larger diameter in which the front disc (2) of the cutter head (1) is loosely inserted.
4. The device according to claim 1 characterised in that the spacing piece (9) comprises an outer annular flange (11) on its end supported on the annular face (12) of the mandrel (4). 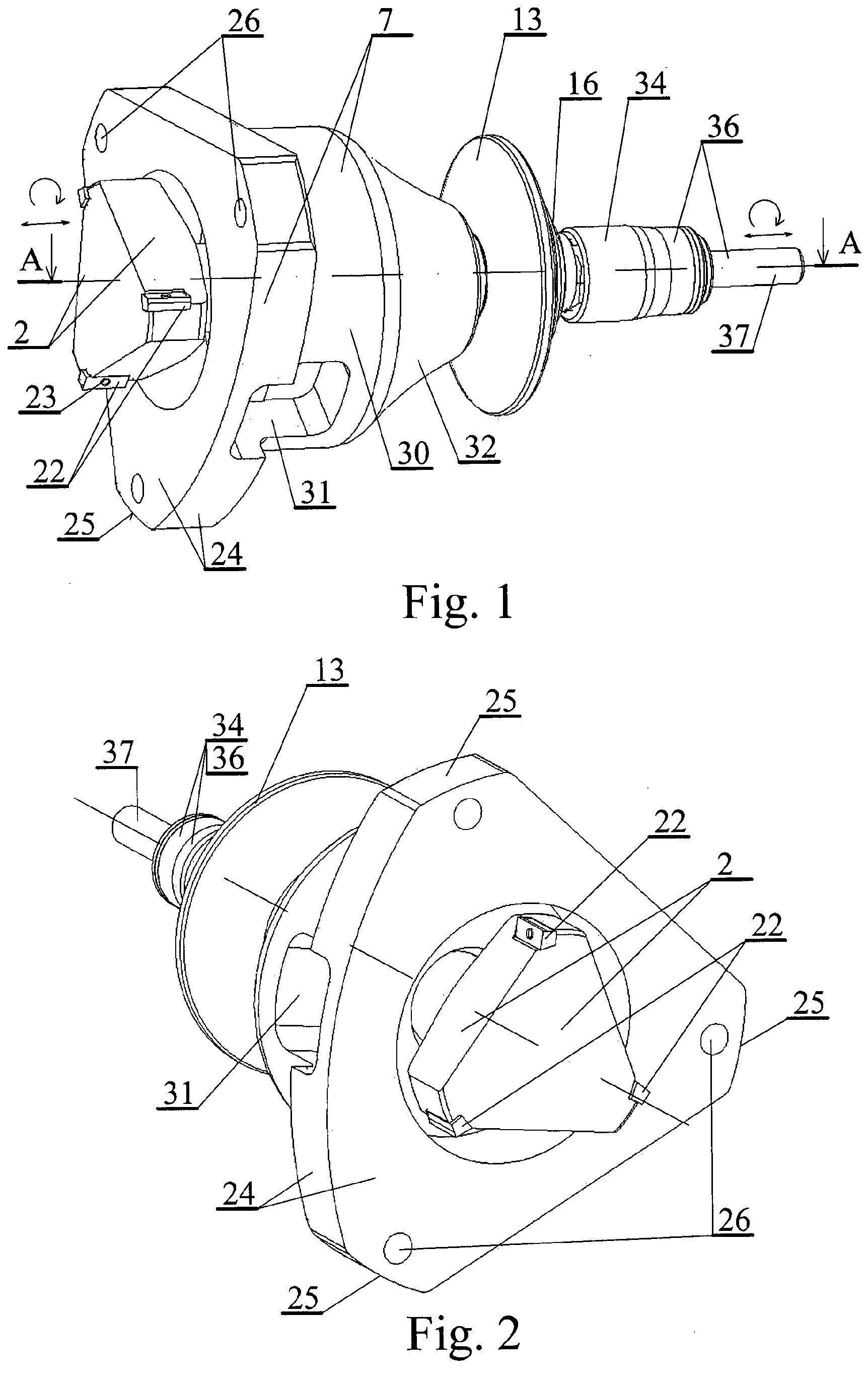 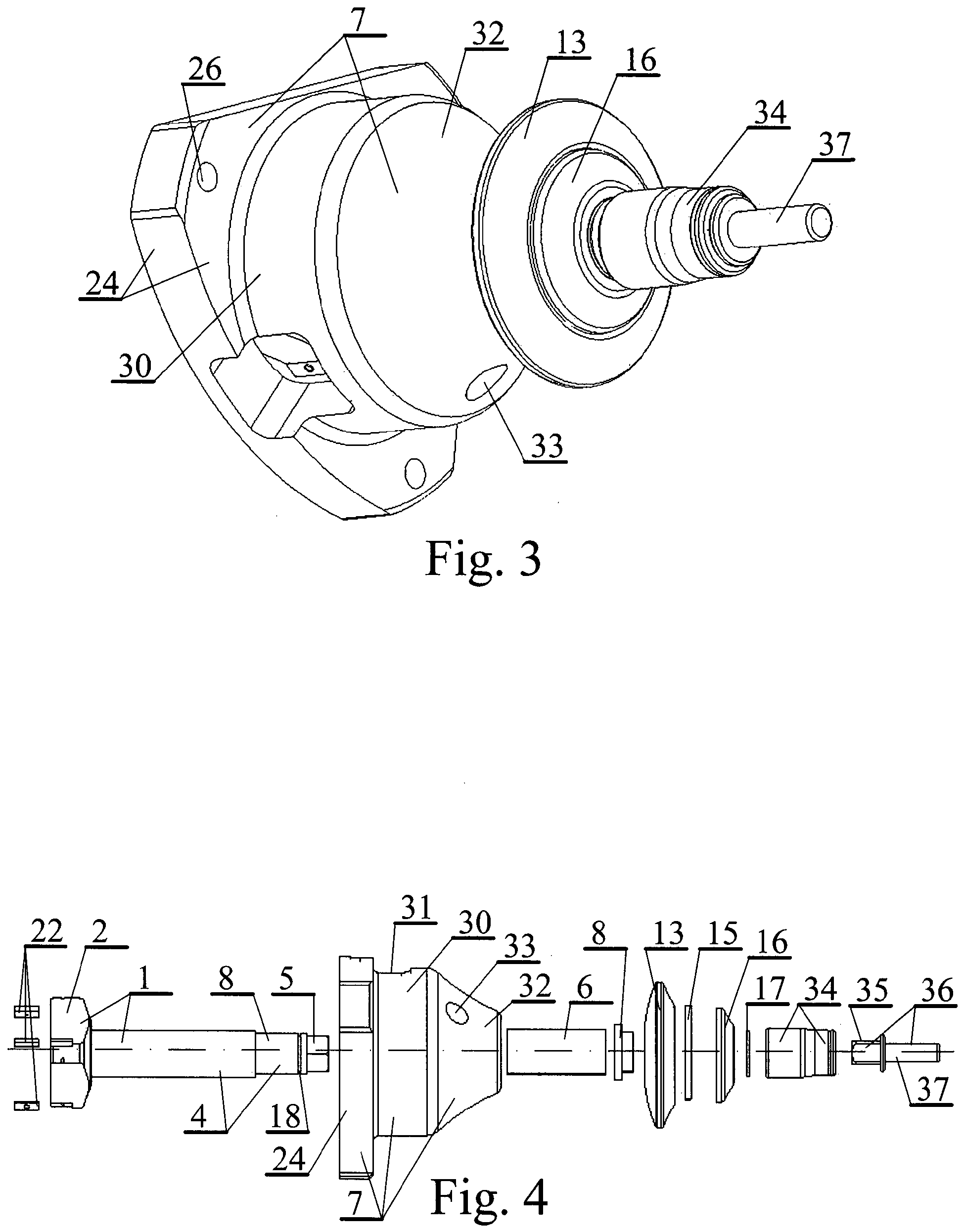 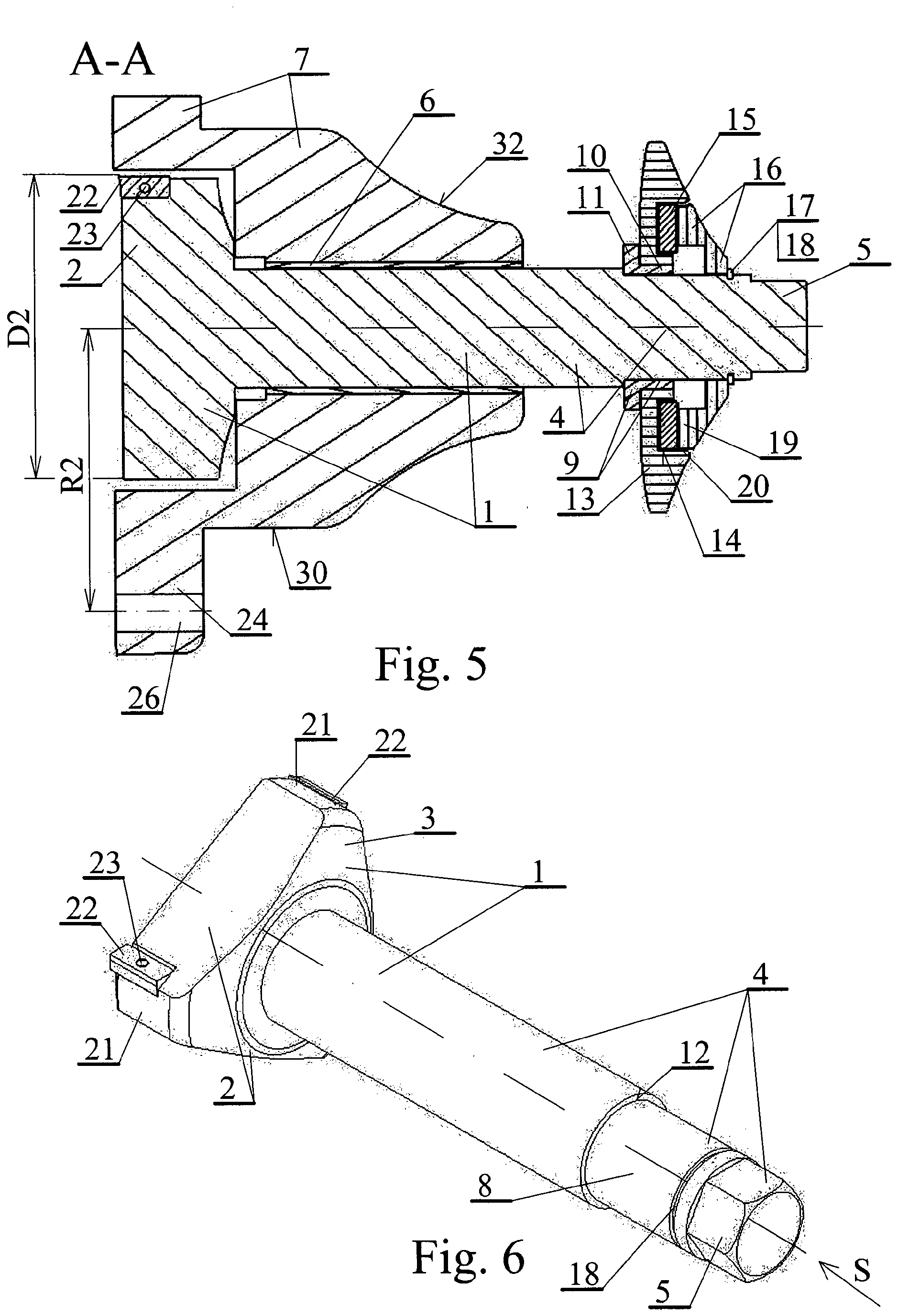 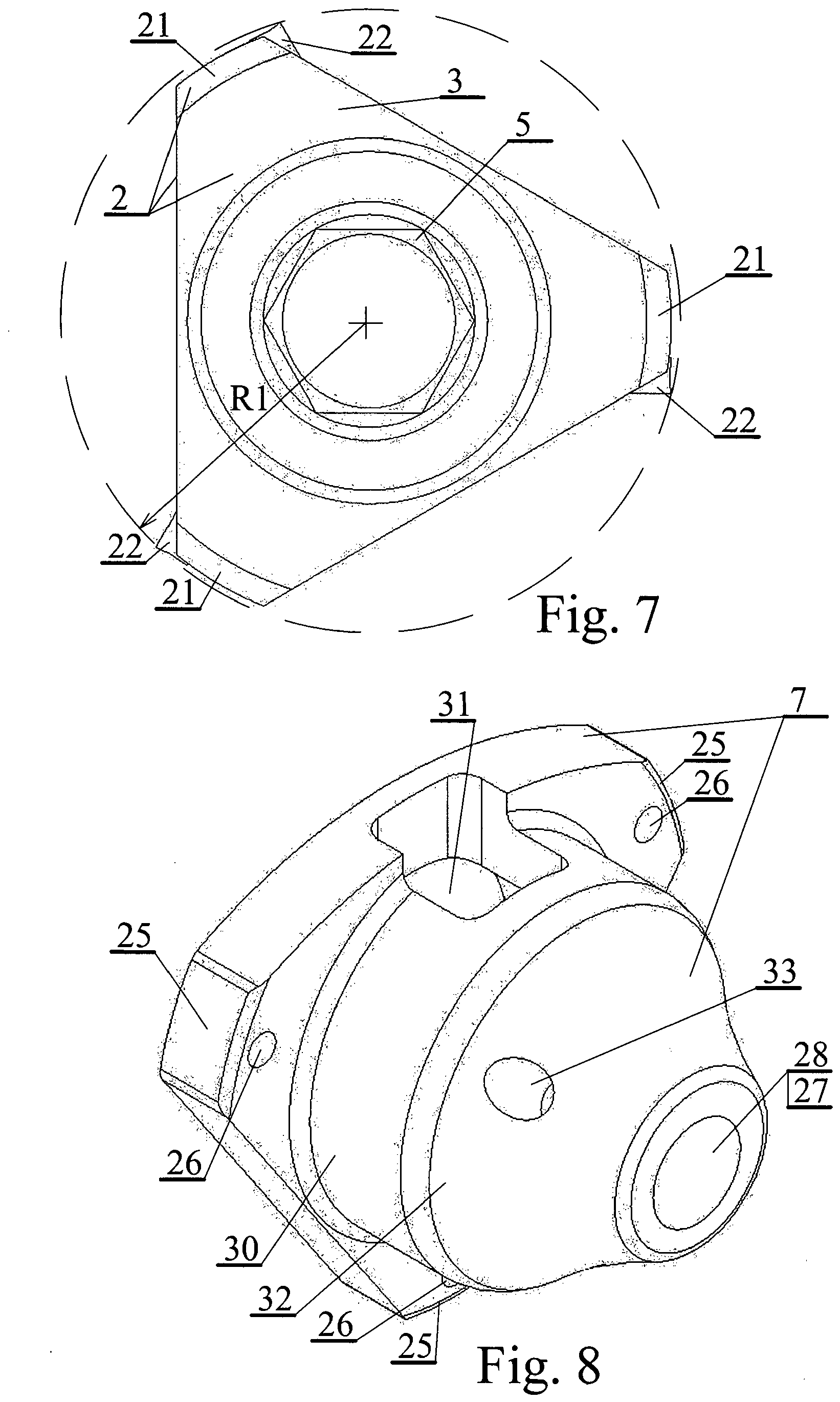 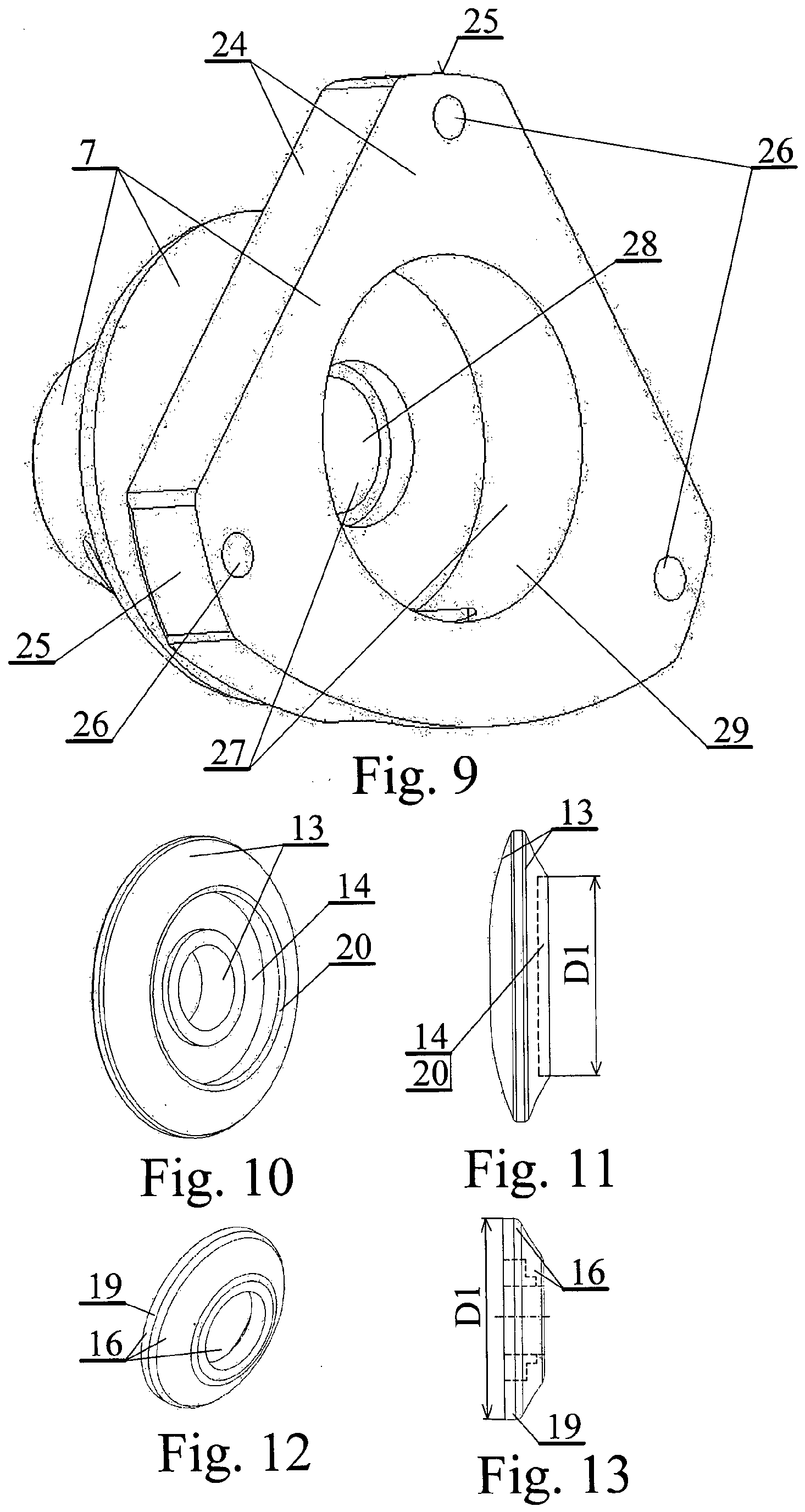