[0001] The present invention refers to a closing device for containers of bottle and/or jar type, which in turn is a dispenser of active formulas housed in an interchangeable hermetic cartridge secured therein, provided of specially designed means that enable them to be emptied into the liquid or contents of the bottle when it is required to perform the mixture. The invention also refers to the method of manufacturing the closing means.
[0002] This closing device comprises an exchangeable tubular cartridge hermetically designed to contain inside active formulas, and that also contains inside a displaceable central push-cut carriage that is mechanically driven by an external actuator to cut the seals on said tubular cartridge and push the active formulas into a bottle or jar that contains liquid within, thus allowing to mix the formula with the content of bottle as required.
[0003] This type of dispenser closing devices is beginning to be used in the food field to incorporate elements such as vitamins or minerals, a process called fortification, where it is required to store the components separately from the container contents in order to protect the active principles hermetically from moisture, oxygen and light, thus extending their life and improving their effectiveness.
[0004] In addition, the fact of being able to exchange the cartridge extends the device life because it allows to add new cartridges with the active principle a great number of times, preserving and reusing the central body of the device.
[0005] Similarly, these closing devices that allow the addition of substances are used in the medical and/or pharmacological fields, enabling to mix extemporaneously active formulas, such as probiotics, thus avoiding the rapid degradation of the final compound; in both cases, a particular additive that is hermetically contained and protected is required to be released briefly before using and/or consuming the container contents, allowing to mix and subsequently release the product already mixed.
[0006] On the other hand, the separation of the central body from the interchangeable hermetic cartridge allows reusing the base body a number of times; the cartridge can be marketed separately, thus making its transport and distribution easier and saving space in its distribution and logistics.
[0007] Moreover, the fact that the cartridges can be exchanged makes it easier to control the quality of the extemporaneous mixture of the products (the active principles of this type are generally highly reactive and degradable); this means that if any batch of the active principle has a problem, the cartridges of the device can quickly be withdrawn without having to destroy the device in order to gain access to them.
[0008] Besides, another particularity that is important to mention is that, unlike the solutions existing today in the dispenser devices, the fact of having an interchangeable cartridge implies that it is possible to dispense a great number of different volumes using the same Central Body of the device, since the interchangeable cartridge may have different dimensions and, therefore, may contain different volumes of the formulation to be dispensed, imparting to it a flexibility unknown until now.

Description of the State of the Art

Description of the Invention and the Drawings

[0026] The object of the present invention is to propose a closing device for containers of bottle and/or jar type, that at the same time is a dispenser of active formulas housed in a interchangeable hermetic cartridge attached inside, wherein said device presents a configuration that enables adding or releasing by mechanical means an additive or active principle into the container to which it is affixed, wherein this substance may be in solid state (in the form of a tablet or powder, granule or other form) or fluid (liquid, gel or the like).
[0027] In this case, the additive is maintained hermetically isolated from the exterior, both during its storage and when it is released.
[0028] The present device has a structure formed by five parts: a cover, an actuator, the base body of the system, a removable cartridge and a mobile push-pull carriage. These parts are interlocked, forming a single unit that is the closing device.
[0029] The description of the figures of this presentation, allows to get a better understanding of the device sought to be protected and the component parts thereof:

Figure 1/9, shows cover (1), that corresponds to a hood, which comprises a preferably circular, elongated body closed at the top and open at the bottom, comprising:

Figure 2/9 shows the actuator (2) of the device, which corresponds to a sliding part with a vertical central through-bore, and that comprises:

Figures 3/9 shows the base body (3) of the device, which comprises:

Figure 4/9 discloses the removable cartridge (4) of the device that corresponds to a cylinder open at both ends that projects itself for twice its length to the threaded portion of the body that is joined to the bottle, which comprises:

1. Closing assembly for containers of bottle and/or jar type, that allows to dispense a hermetically isolated additive into said container, the assembly comprising

- a base body (3), having connecting means with the container,

- an actuator (2), slidably connected to said base body (3) between a closed position and a release position,

- the connecting means with the container;

- a vertical central through bore;

- an inner element (2.d) that surrounds the vertical central bore;

- ribs (2.a) that allow the liquid to flow out of the closing assembly.

- a cover ledge (1.b) formed around the inner surface of the elongated body on its upper portion,

- a tongue-shaped sealing element (1.a) circularly positioned at the top of the cover, which extends towards the interior of said cover;

16. Closing assembly according to claims 5, 13, and 15 wherein in its closed position, various isolated volumes are defined between the cover (1), the base body (3) and the actuator (2) that act as a barrier to prevent the passage of air or contaminants into the section where the additive is stored, wherein:

- a first volume is generated by the contact between the shoulder (2.f) of the actuator (2) and the cover ledge (1.b);

- a second volume is generated by the engagement of the actuator ring or ledge (2.b) with the nozzle ledge (3.a); and

- a third volume is generated from the vertical central bore of the actuator (2), whose inner surface is sealed against the tongue (1.a) of the cover (1).

separately manufacturing the base body (3), the actuator (2) and the cartridge (4),

the manufacturing of the cartridge (4) comprising

sealing the lower membrane to the lower end of the removable cartridge;

incorporating the push-cut projectile into the removable cartridge;

injecting the additive into the removable cartridge through its upper end;

sealing the upper membrane to the upper end of the removable cartridge; the process further comprising the subsequent operation of

assembling the removable cartridge with the base body via the connecting means. 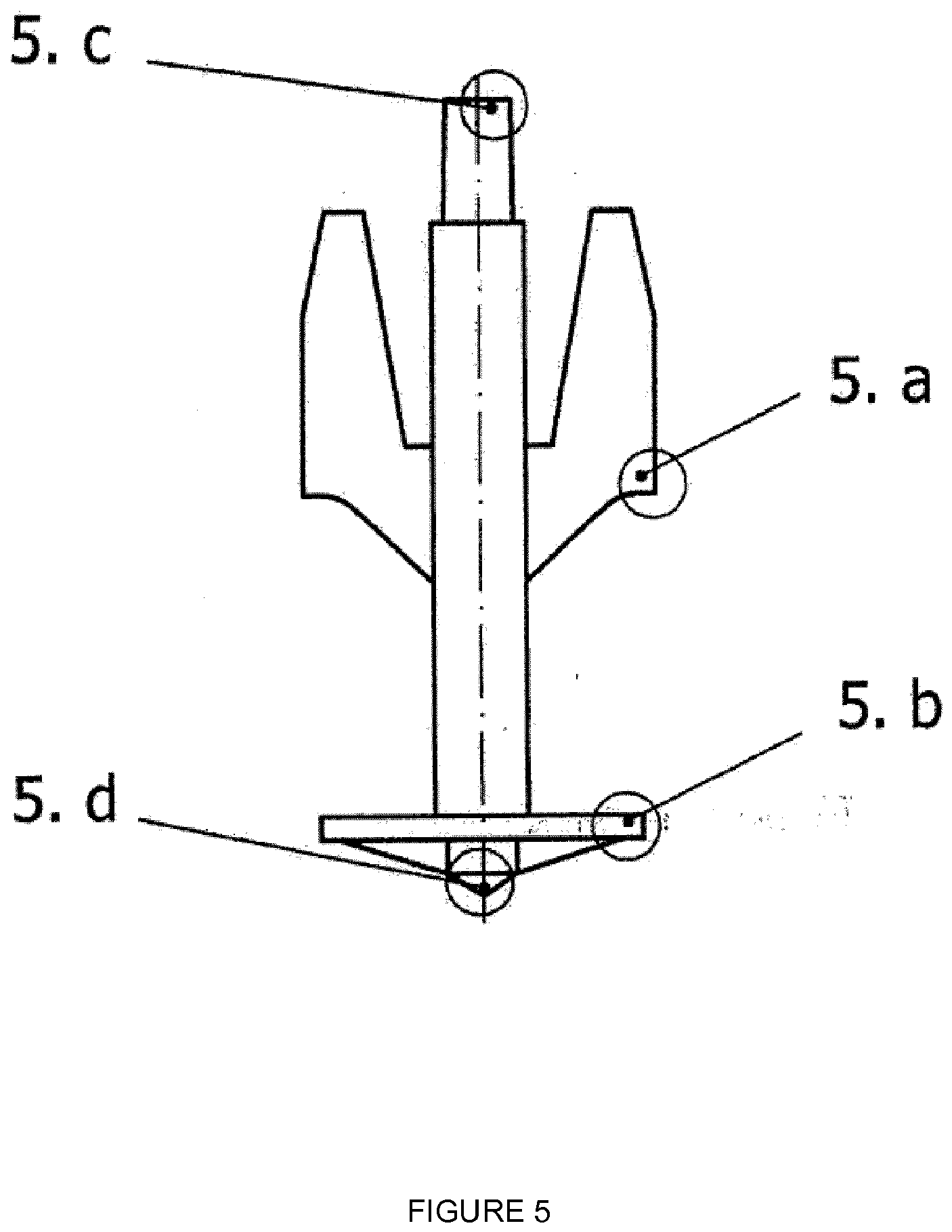 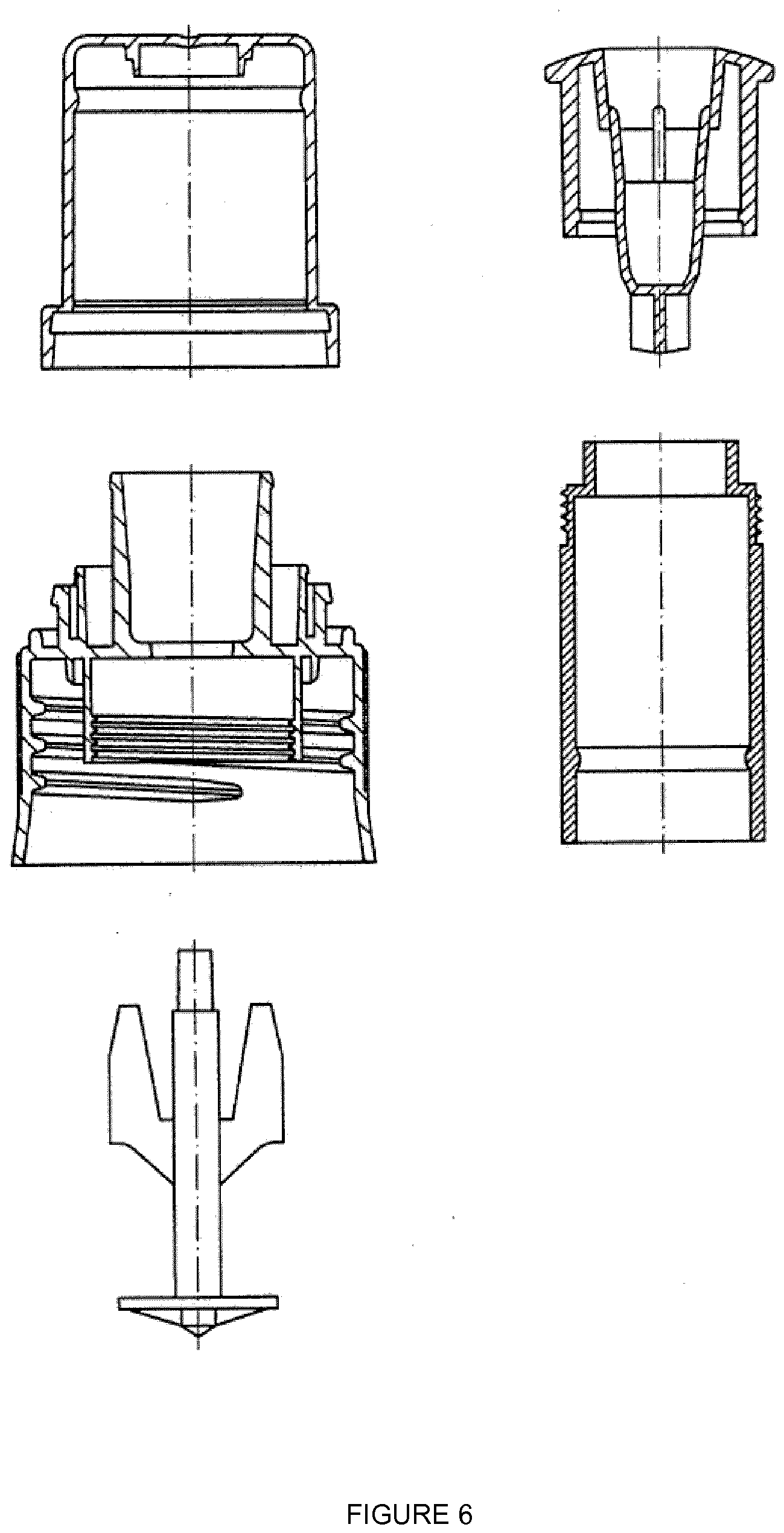