[0002] The present invention is in the field of renewable energy. Renewable energy typically relates to energy that comes from resources such as sunlight, wind, rain, tides, waves and geothermal heat. Renewable energy replaces today's fuels in various areas, such as electricity generation, hot water/space heating, motor fuels, and rural (off-grid) energy services. The present invention relates especially to off-grid energy services, and the energy sources preferably to wind and sunlight. It is noted that the estimated potential of worldwide solar energy exceeds the present energy worldwide energy consumption by a factor 1000, and likewise the potential of wind energy by a factor 1-5; there is abundant renewable energy and it is ready to be harvested.
[0003] The present invention makes use of a container. An intermodal container is a standardized reusable steel box. They are typically used to store and move materials and products in a containerized intermodal freight transport system. "Intermodal" indicates that the container can be moved from one mode of transport to another (from ship, to truck, etc.) without unloading and reloading the contents of the container. Lengths of containers, which each have a unique ISO 6346 reporting mark, vary from 2.438 to 17.069 m and heights from 2.438 m to 2.896 m. It is noted that for air freight alternative definitions may be used.
[0004] In various cases there may be an emerging need for energy. For instance, in developing countries a (temporarily) lack of energy causes problems e.g. in terms of development in general, in terms of health, and safety. It is therefore considered that local power generation is a basic need for e.g. quality of life, emergency aid, and may even overcome prosperity in due time. Also lack of energy may hamper community development, health and education. In another example of emergency aid, such as after a natural disaster, in case of outbreak of a disease, an infrastructure may need to be set-up in order to tackle problems adequately. In yet another example of warfare an infrastructure in a base camp needs to be set-up, typically within a short period of time.
[0005] It has been found troublesome to provide quick access to a reliable energy source in the above and similar situations.
[0006] A disadvantage of prior art systems is that typically large amounts of carbon based energy needs to be supplied as well. These systems are typically expensive in operation and maintenance, and cause environmental and health problems.
[0007] In some cases renewable energy technologies have been developed to tackle the above stated problems, but appear too limited by being only a partial solution providing wind or sun as an energy source, or require time consuming transportation and installation, and large application area requirements.
[0008] Some documents recite combined power systems.
[0009] US 2014/231284 recites a transportable, deployable power system comprising a hybrid power box containing solar panels, wind turbine(s), fuel cells, fuel reformers, and other energy sources. The system could also include waste water and potable water inlet and outlet ports for water treatment. It will also allow for shelf mounted solar and wind turbine installation for disaster recovery, backup power for telecommunication, military power, Homeland Security power, off grid homes and water and wastewater packaging domestically and internationally. The present invention is ideal for any situation requiring immediate power and/or water treatment, such as remote construction sites or in emergency situations. The hybrid power box can be mounted to a standard shipping truck, train, or ship, and transported over land to the desired location.
[0010] FR 2 951 881 A1 recites a module that has a solar generator completely covering a wind turbine, and a frame or spacers for integrating the wind turbine and a case that gathers sources energy management electronics from sources and an energy storage element or a socket. A base plate fixes the module on a surface or a mast. The solar generator, the wind turbine and the frame are integrated in order to form a coherent and monoblock assembly. The case and the base plate are placed in order not to obstruct and contrary a channeling of air flow on the wind turbine.
[0011] FR 2 898 738 A1 recites a fuel cell e.g. proton-exchange membrane cell, with hydrogen from a hydrogen bottle for constituting an electrical energy reserve. Another electrical energy reserve is constituted by a windmill or solar panel. The electrical energy is produced from the latter energy reserve by the windmill/solar panel or from the former energy reserve by the fuel cell, when the windmill/solar panel and latter reserve are in defect. An independent claim is also included for an installation for supplying an electrical energy. This system still relies on an energy supply reserve which is incorporated in the system and is therefore not a real stand-alone system.
[0012] None of the above systems can be installed quickly, e.g. within a few minutes of time.
[0013] Therefore there is a need for an improved stand-alone energy system, which overcomes one or more of the above mentioned disadvantages, without jeopardizing functionality and advantages.

[0014] The present invention provides an improved stand-alone integrated renewable electric power station according to claim 1.
[0015] The present system provides a low cost system, which can be transported efficiently. The operating costs are low or absent. It generates both wind and solar power, which makes the energy supply more reliable over time. The combination in an integrated system also provides a significant increase in available energy being less dependent on variation in weather conditions. For a standard system the amount of energy to be harvested varies of course form location to location, depending on wind and sun conditions. It varies from approximately 4000 kWh/year to 12500 kWh/year (Aruba) or more. The solar energy portion varies from approximately 2700 kWh/year to 7000 kWh/year (Dubai) or more, and the wind energy portion varies from approximately 600 kWh/year to 7000 kWh/year (Aruba) or more. In principle the present system is also self-deployable; initial energy harvested can be used to deploy the system, such as by moving the system outwards.
[0016] The present system is also a modular system, which modules may be combined into a larger system. For instance depending on demand, more or less modules may be used.
[0017] It provides reliable and safe transportation, reducing risks of damage during transport significantly. Also in case of unsuitable weather conditions, such as storms, hurricanes, sand storms, etc. the integrated system can be moved back (automatically) into the container, thereby protecting the valuable energy system by its resilient and safe structure.
[0018] The present system can also be easily extended internally and externally, e.g. in terms of functionality, turnkey solutions, custom fit solution, etc. thereby providing a total and modular solution. The extensions can be made at a system construction location, and shipped as such to a location of use. Thereby it may provide a large variety of solutions, which are fit and adapted to different (social) problems and limitations of a use location. The system can also be multi-functional, such as providing more than one solution to more than one problem.
[0019] The present system is easy in use and easy to maintain.
[0020] As the present system is stand-alone it can also be used at distant locations. Likewise it can be used at locations without a connection to a standard power grid. For instance in many countries access to the internet and wireless communication is available, but there is no access to electric power. Such causes problems in terms of recharging electric equipment, which problems can be overcome easily with the present system.
[0021] The container used is preferably an intermodal container. The size of the container can be any of the above given sizes, or future sizes. The size is typically determined by a required output, and/or can be provided by multiple units. The container may also relate to a structure resembling the intermodal container in size and functionality.
[0022] The container when closed comprises the elements of the present integrated energy system. It comprises at least one wind energy system. The present wind energy system does not resemble typically used wind energy systems, such as wind mills, at all, but relates more to a vertical axis wind turbine (VAWT) type. General details and background of the present wind energy system may be found in the patent US 8,210,792 B2 of one of the present inventors. Further details are provided throughout the application. The present wind energy system is amongst others characterized by its relative flat structure; as such it could be mounted on a roof, or as in the present case in a container. It also relates to a modular system which can be extended easily. When installed, i.e. when wind access towards the system is provided, the wind energy system is ready for electric power production and can in principle start immediately to do so.
[0023] Attached to the wind energy system, typically on a top side thereof, is at least one PV-system. The at least one PV-system and wind energy system may be provided to one single power outlet, or to more than one power outlets. Optionally switches are provided for directing electric power to one or more power outlets.
[0024] In order to protect the present integrated system, and in particular the PC-system, at least one protection wall is provided. It is preferred to use a side of the container as such, such as a top side thereof. The protection wall is preferably deployable.
[0025] The present wind energy system comprises duct defining elements defining at least one duct. The duct directs available wind in an optimal way towards the wind turbine. The present wind energy system comprises at least one obstruction means per duct, the obstruction means being positionable in at least a start-up position (e.g. in case of transportation and storm) and a free flow position (see e.g. fig. 2).
[0026] Thereby the present invention provides a solution to one or more of the above mentioned problems.
Advantages of the present description are detailed throughout the description. 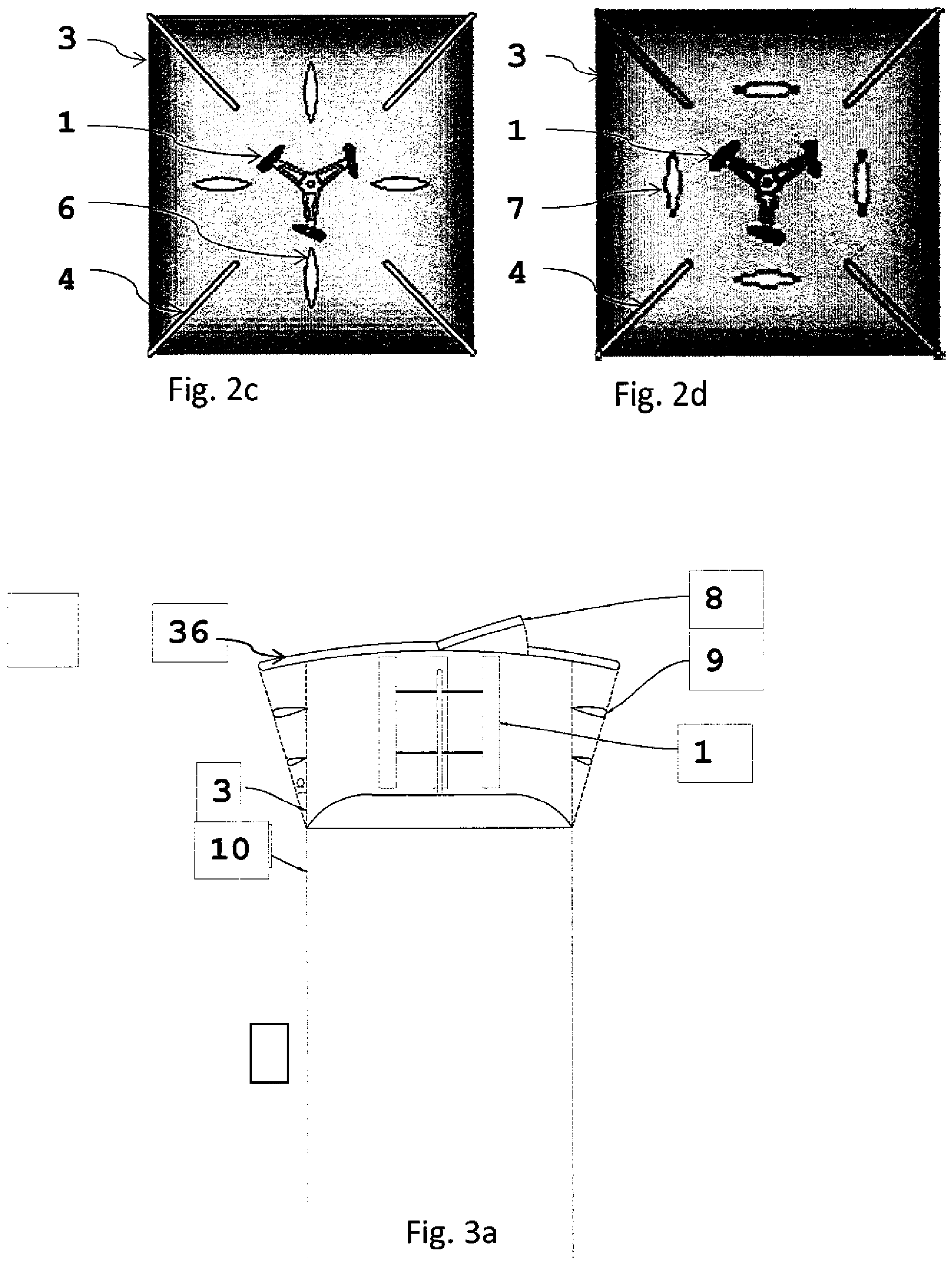 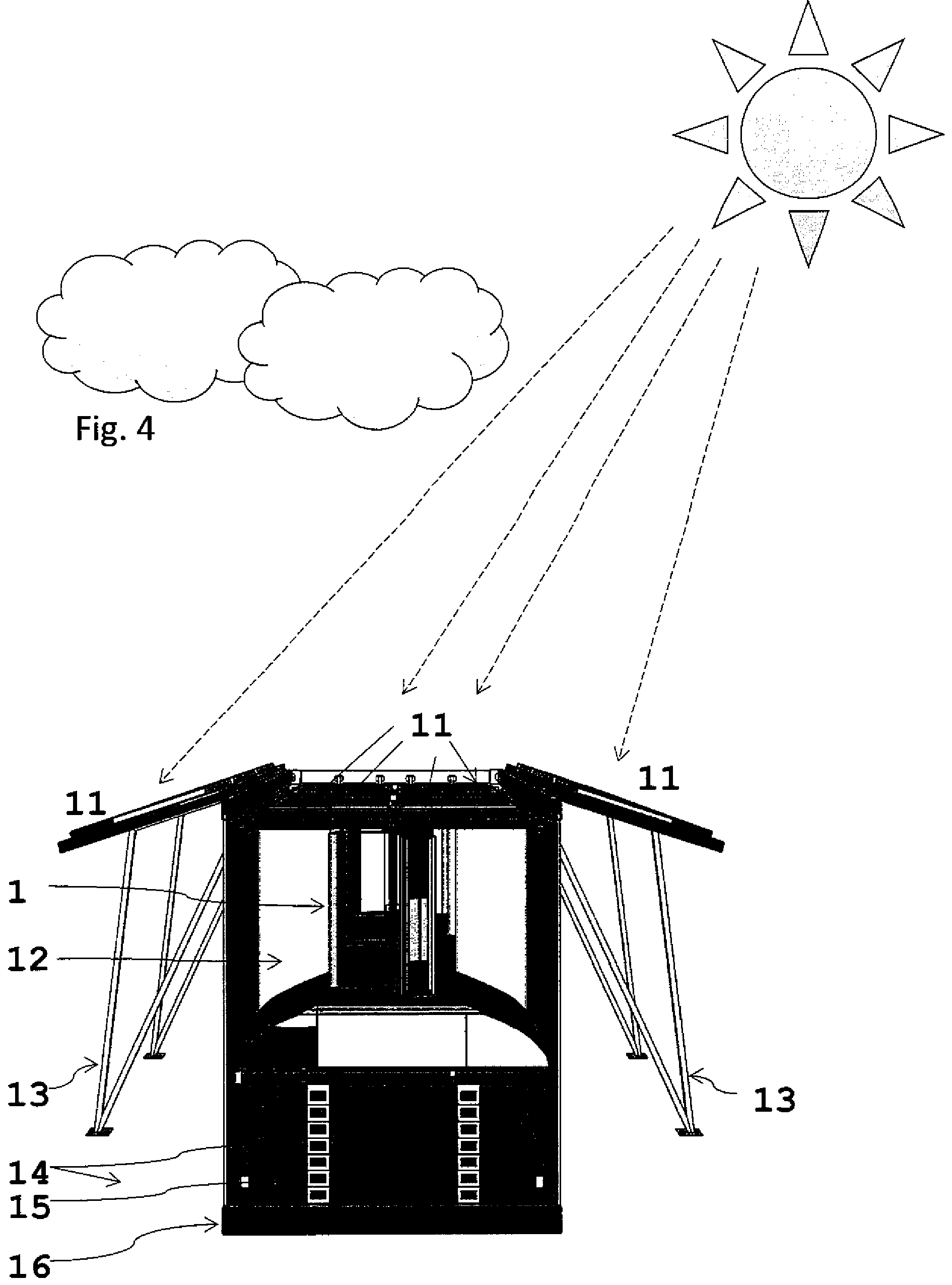 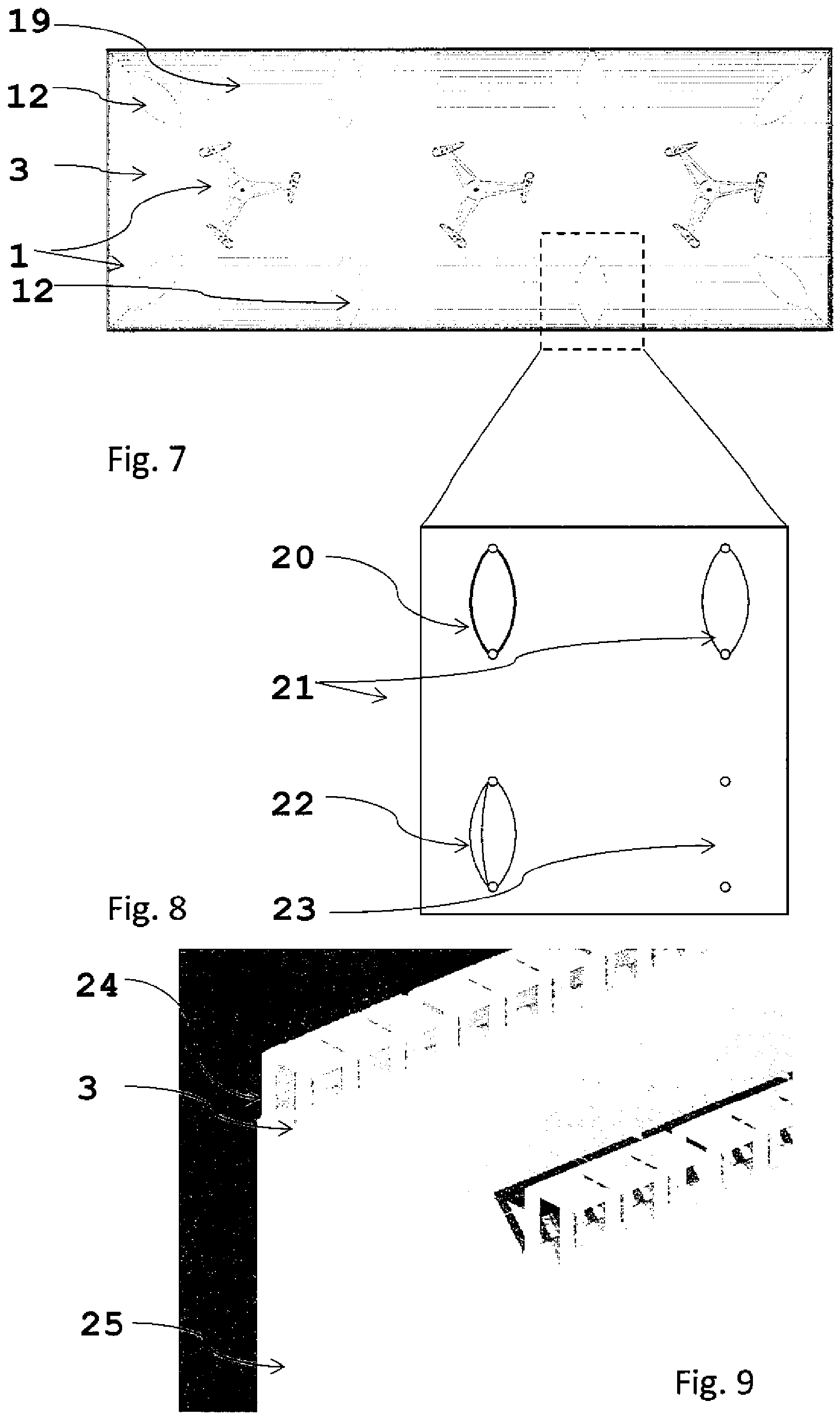 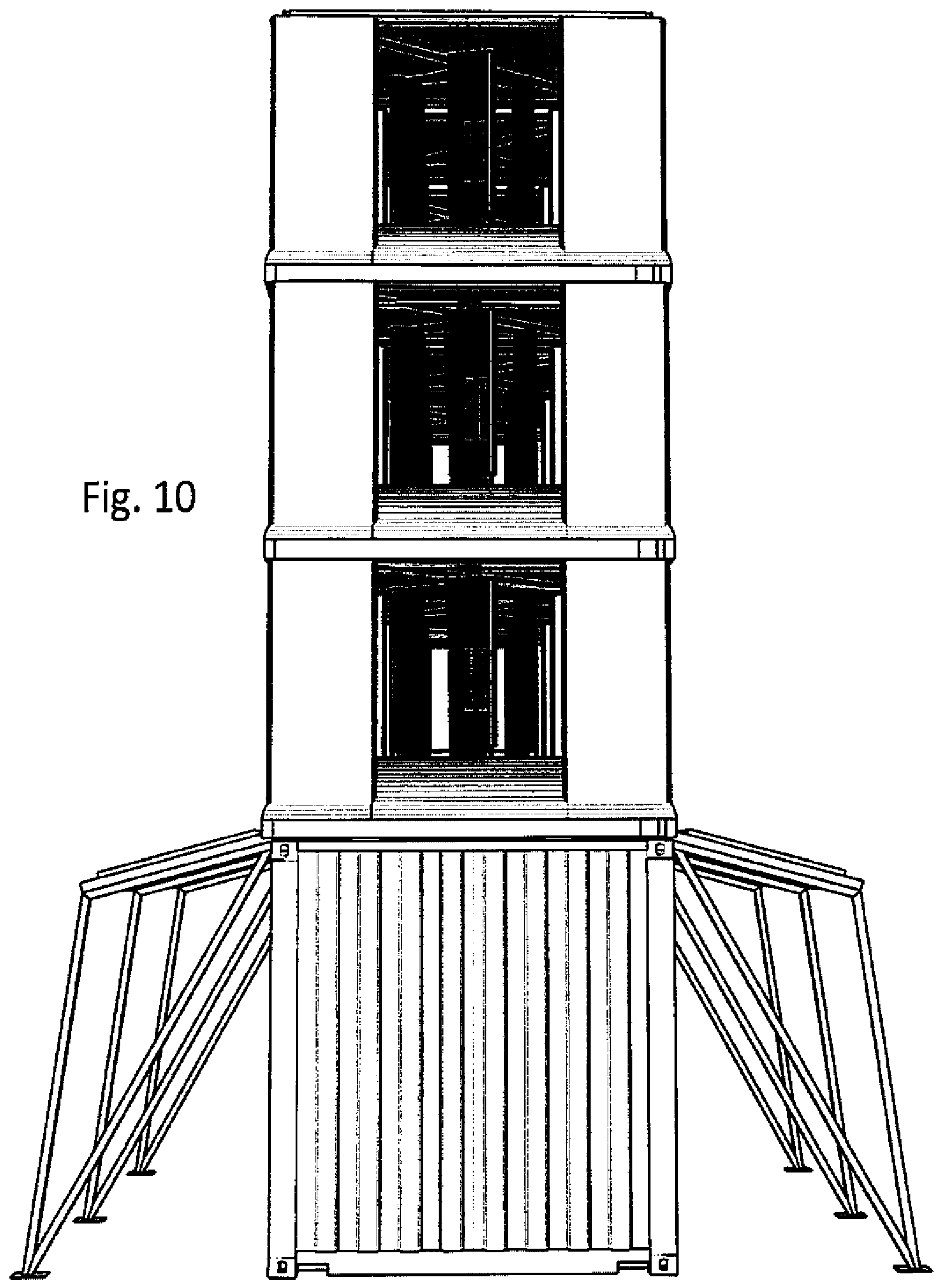