[0002] One example of motion training aid is known from WO2003024544. It discloses a repetitive motion feedback system is provided with various sensors and devices for monitoring aspects of a repetitive motion sequence, such as a golf swing. The monitored aspects can include motion properties of an object moved by the user, position properties of the user and motion properties of the user. A data processing system for receiving data of the monitored aspects provides feedback data that is provided to a feedback output device, such as a graphical display device or speaker, so that the user is provided with feedback regarding the repetitive motion sequence. In one particular embodiment, the user's performance is compared to a template of a prior performance, with feedback being provided regarding the differences.
[0003] Another prior art document is US6778866 disclosing a method and apparatus for teaching a person how to perform a specific body motion in a consistent manner is based on electronically measuring one or more parameters of an actual body motion, comparing the one or more measured parameters with corresponding parameters of a target body motion, and providing a sensible feedback to the user based on a degree of correspondence between the one or more measured parameters and the corresponding target parameters. In a particular embodiment, the feedback is audible. More specifically the feedback is a musical tune that has a particular characteristic (such as rhythm) that is particularly suited to a particular body motion (such as a golf swing). The feedback may be in the form of electronically causing the musical tune to go off-key in proportion to a discrepancy between the actual body motion and the target body motion.
[0004] A further prior art system and method for teaching ergonomic motion of an athlete, for example a golfer is disclosed in WO200518759. The system including the video camera for capturing successive image of the golfer executing a preferring golf swing and a threshold definition system that allows the golfer define a spatial region of the video image. If the spatial region is intruded upon, an alarm is actuated, thereby providing feedback so the golfer may alter the technique of the next attempted motion. For example, the golfer may define the region such that if the club moves off plane during a swing, a tee removal system causes the ball to disappear. In this manner, the golfer is only able to hit the ball when the club stays on plane.
[0005] US2004064157 discloses an apparatus for maintaining energy storage in an implantable medical device. This document discloses a charge maintenance process providing a charge maintenance current to a capacitor until the capacitor is therapeutically discharged.

[0006] The present invention is defined in independent claims 1 and 3 and optional features are defined in dependent claim 2. The inventors are aiming at providing a device for providing fast feedback for training devices used to train and perfect some kind of user behaviour, or action, wherein this behaviour or action is happening relatively quickly. Examples of such behaviours or actions include but are not limited to e.g. sports motions, such as technically complex motions occurring in e.g. athletic field events (high jump, pole vault, hammer throw, javelin throw etc), or gymnastics (jumps, choreography, cheerleading moves), or baseball, or golf (golf swing, putting stroke), just to mention a few.
[0007] It is desirable that a feedback signal signalling a less efficient move, or a "bad" move, or a movement that deviates from a reference movement should be instantaneous, or at least perceived as instantaneous by the user. The stimulus unit is configured to deliver the stimulus with very short delay, preferably, less than 50 ms, or more preferred less than 20 ms, or most preferred less than 10 ms. The stimulus should also be distinct. The inventors are aiming at providing a noticeable and distinct feedback in order to indicate and point out an undesirable motion to discourage said undesirable motion by the user.
[0008] In various embodiments the stimulus unit comprises a body capacitance charging module and a discharge module with body electrodes. The body capacitance charging module is charged to a level that is sufficient to cause an electric shock to the person or animal performing the activity. The electric shock is caused when there is a disagreement between the position values of the current motion and of the predetermined desired motion. The level of charge or the voltage of the body capacitance charging module is measured and further charge is supplied when necessary to maintain a level that is sufficient to provide the electric shock.

[0009] In order that the manner in which the above recited and other advantages and objects of the invention are obtained will be readily understood, a more particular description of the invention briefly described above will be rendered by reference to specific embodiments thereof which are illustrated in the appended drawings.
[0010] Understanding that these drawings depict only typical embodiments of the invention and are not therefore to be considered to be limiting of its scope, the invention will be described and explained with additional specificity and detail through the use of the accompanying drawings in which:

- a first skin electrode (135) for making electrical contact to the body of a user, and

- a second skin electrode (137) for making electrical contact to the body of a user,

- disconnecting the measurement module (150) when a first voltage level is reached;

- waiting a predetermined period of time;

- re-connecting the measurement module (150), and providing maintenance charging if a measured voltage level is at or below a second voltage level

3. A method for keeping a biofeedback stimulator prepared to deliver a biofeedback electrical stimulus to the body of a user via electrodes, the method comprising the following steps:

- applying (210) a charging voltage to the electrodes;

- disconnecting (220) the measurement module when a first voltage level is reached;

- waiting (235) a predetermined period of time;

- re-connecting the measurement module, and providing maintenance charging if a measured voltage level is at or below a second voltage level. 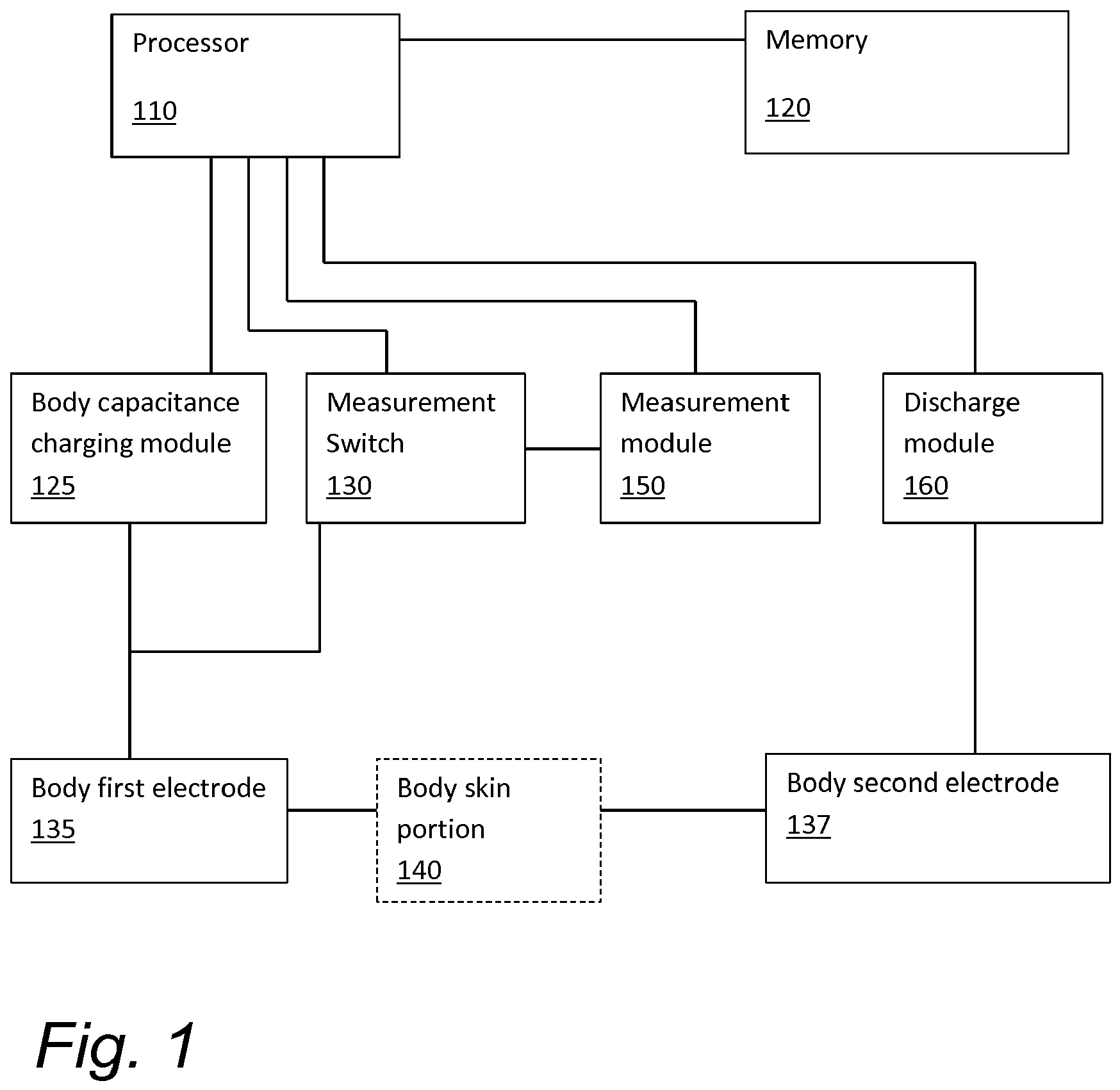 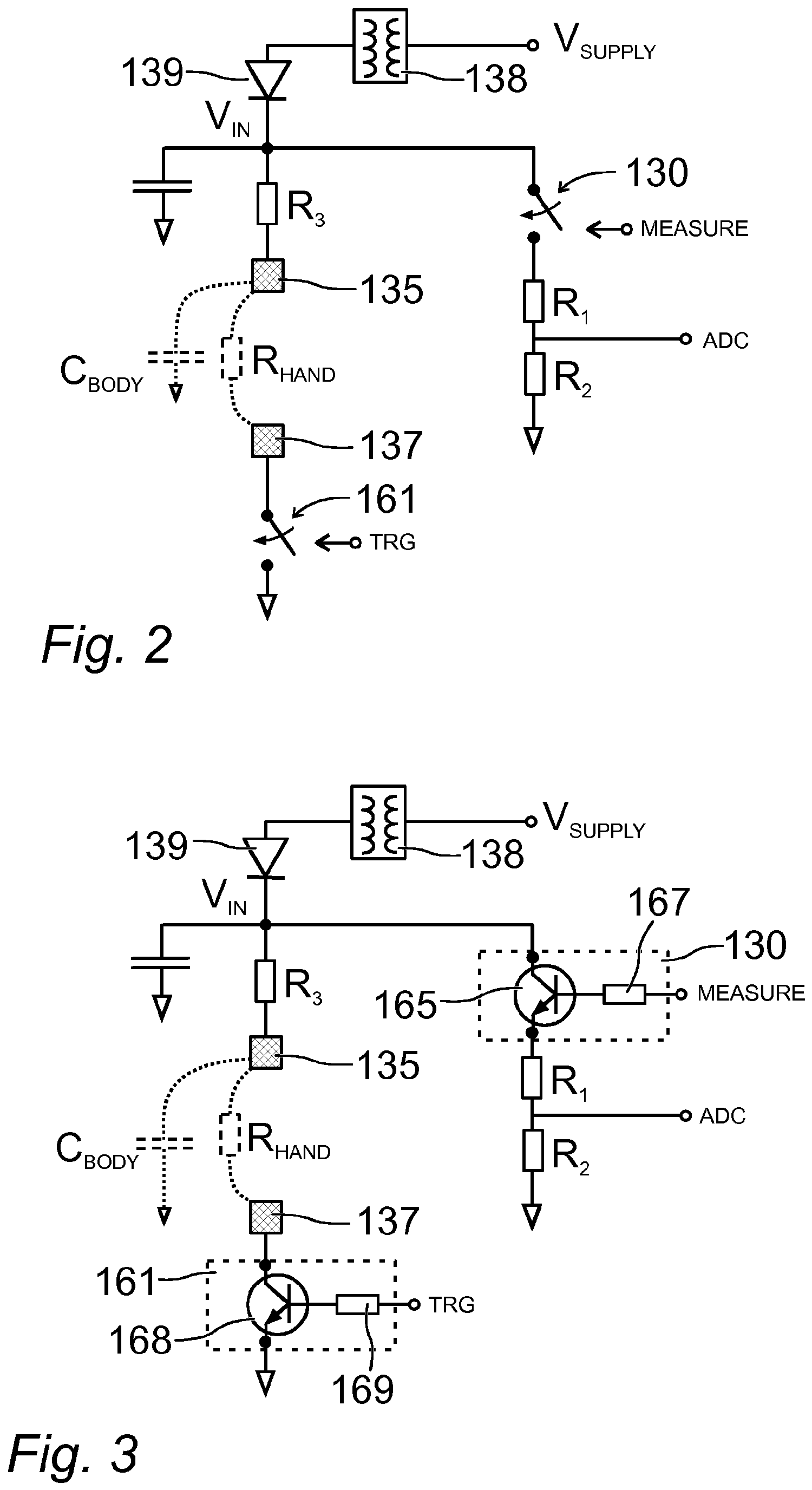 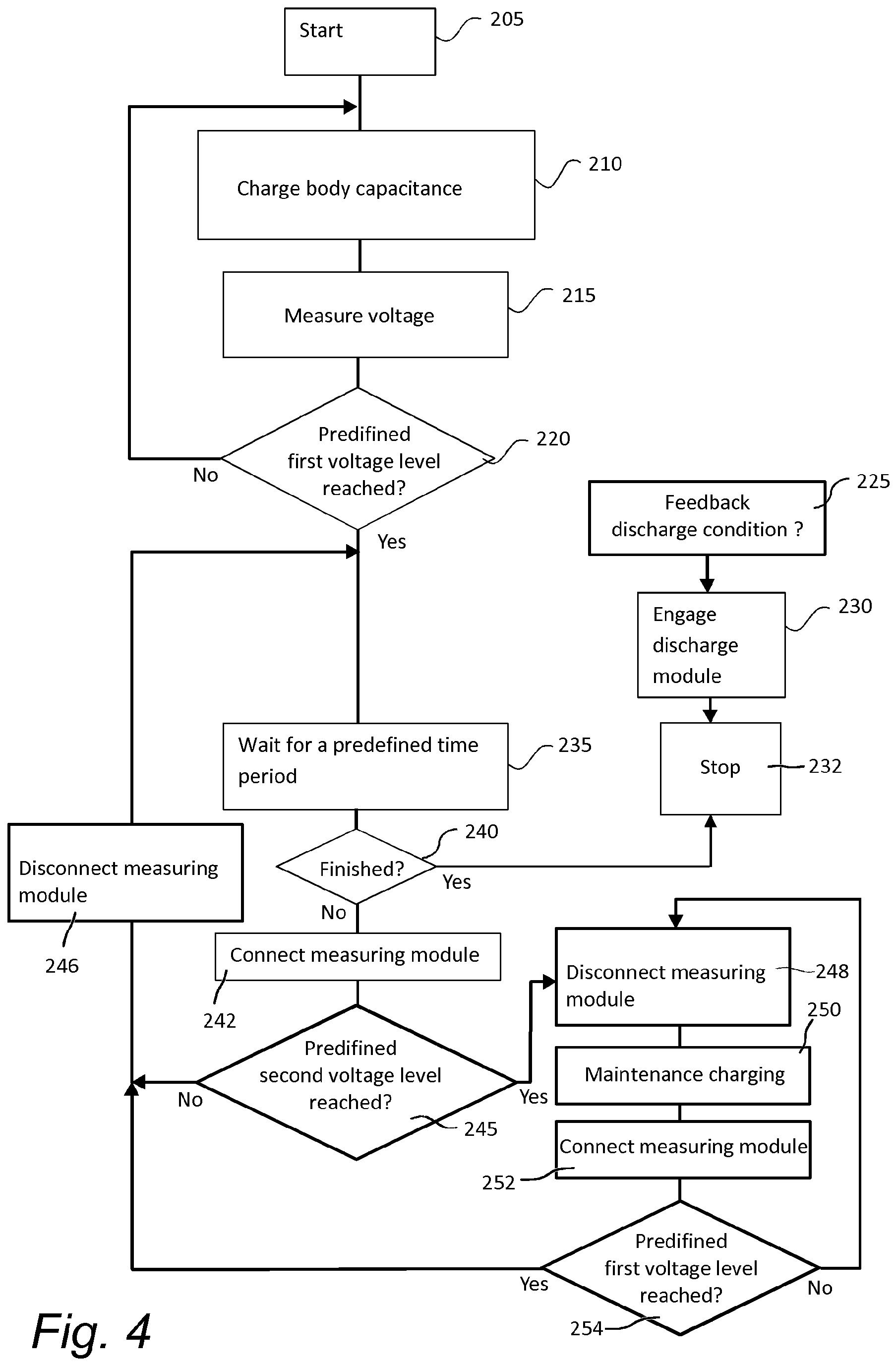 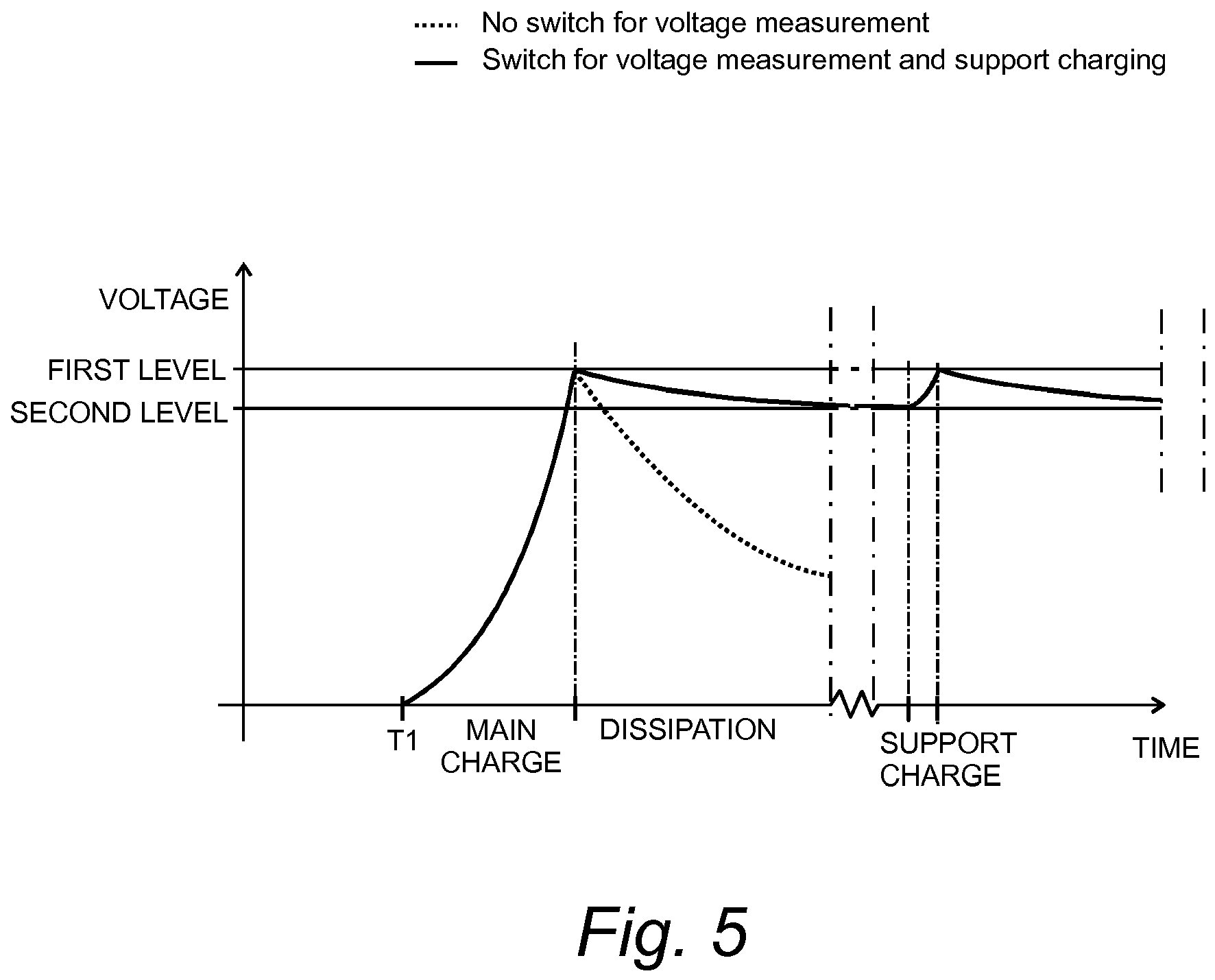