[0001] The field of art to which this invention generally pertains is methods and apparatus for making use of electrical energy to effect chemical changes.

[0002] There are many processes that can be used and have been used over the years to produce carbon black. The energy sources used to produce such carbon blacks over the years have, in large part, been closely connected to the raw materials used to convert hydrocarbon containing materials into carbon black. Residual refinery oils and natural gas have long been a resource for the production of carbon black. Energy sources have evolved over time in chemical processes such as carbon black production from simple flame, to oil furnace, to plasma, to name a few. As in all manufacturing, there is a constant search for more efficient and effective ways to produce such products. Varying flow rates and other conditions of energy sources, varying flow rates and other conditions of raw materials, increasing speed of production, increasing yields, reducing manufacturing equipment wear characteristics, etc. have all been, and continue to be, part of this search over the years.
[0003] The systems described herein meet the challenges described above, and additionally attain more efficient and effective manufacturing process.
DD211457 relates to a method and a device for converting gaseous and liquid carbon carriers into soot and gaseous products.
EP0635044 relates to an apparatus for the production of carbon black and hydrogen by the decomposition of hydrocarbon gas.

[0008] The Figures 1, 2 and 3 show schematic representations of typical methods and apparatus described herein.

[0034] Hydrogen gas is run through a conventional plasma torch electrode assembly in a plasma forming zone. Graphite liners with cooling channels line the plasma forming zone. As can be seen in the Table below, the average temperature of the plasma chamber wall is 2640 K and the maximum temperature is 3210 K. Through the diversion of 10%, 20%, and 30% of the total recycle gas, which is greater than 90% H2, the following examples B, C, and D show a significant decrease in plasma wall temperature. For diversion of 30% of the total recycle gas the average temperature at the plasma wall is reduced from 2640 K to 2450 K and the maximum temperature is reduced from 3210 K to 3040 K. Each of these examples is with a heat input through the plasma torch of 750KW (kilo watts) and a plasma gas flow rate of 340Nm3/hr (normal cubic meter/hour) of hydrogen.
Table

returning the pre-heated recycle gas to the plasma chamber to create the plasma. 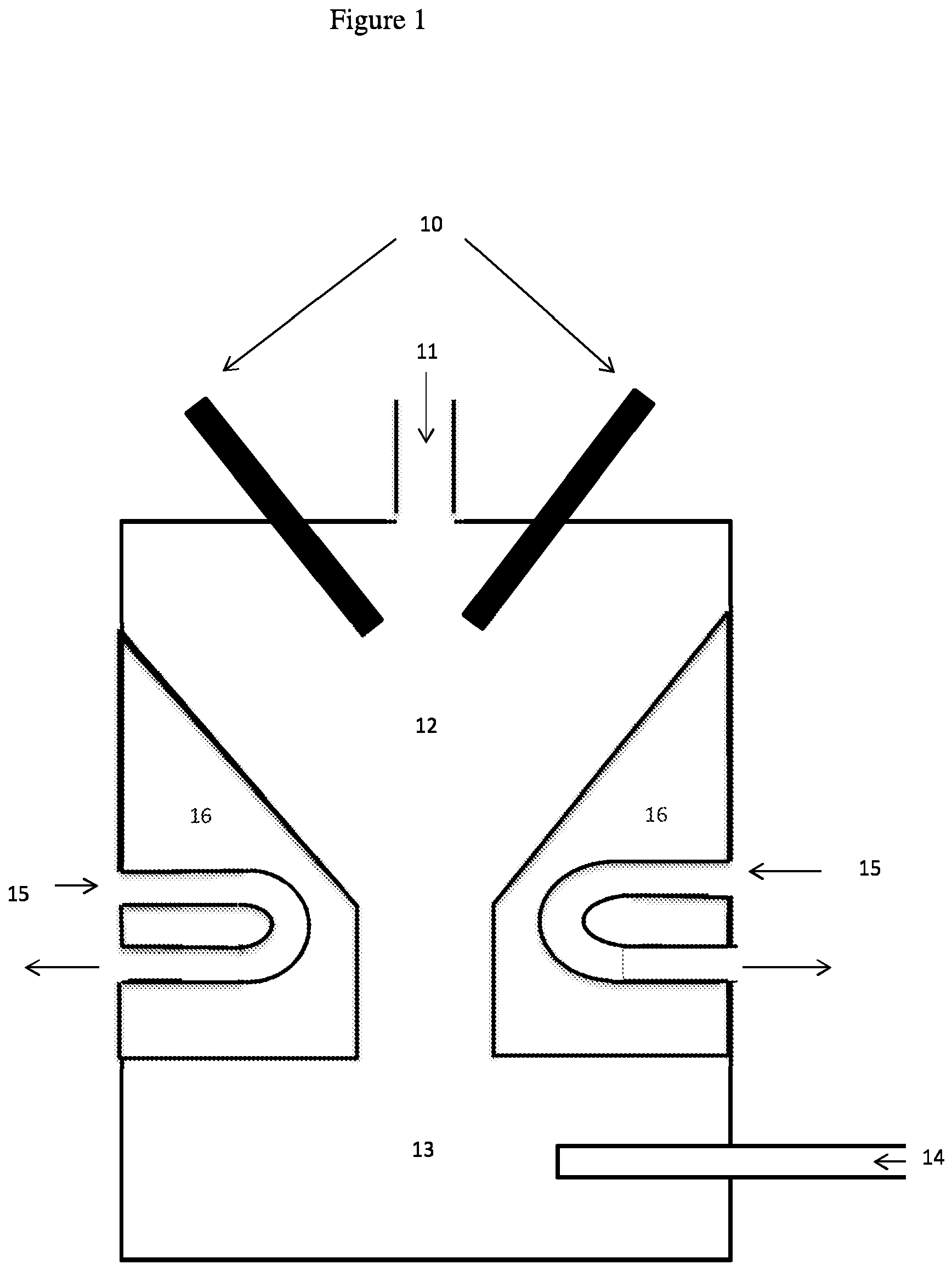 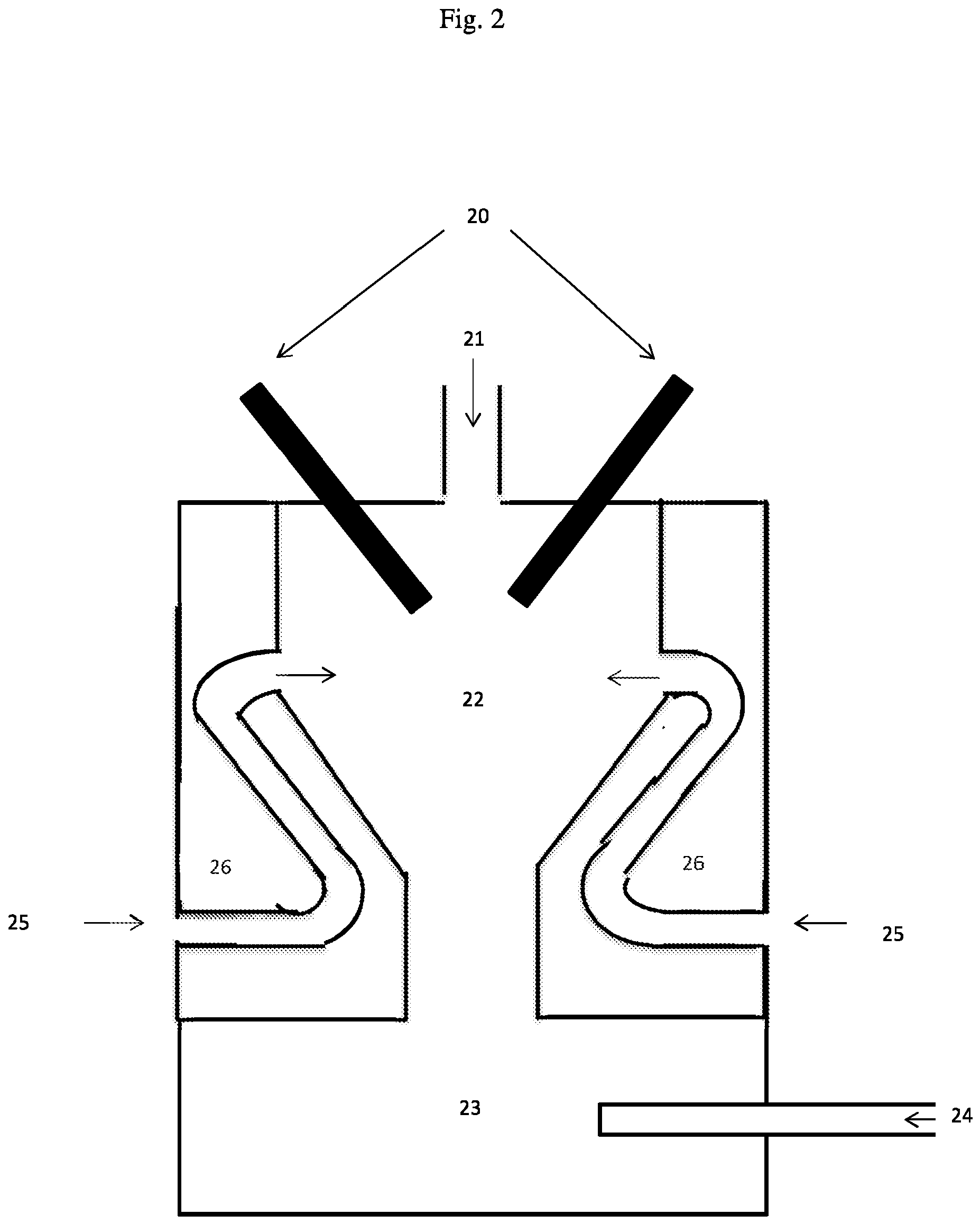 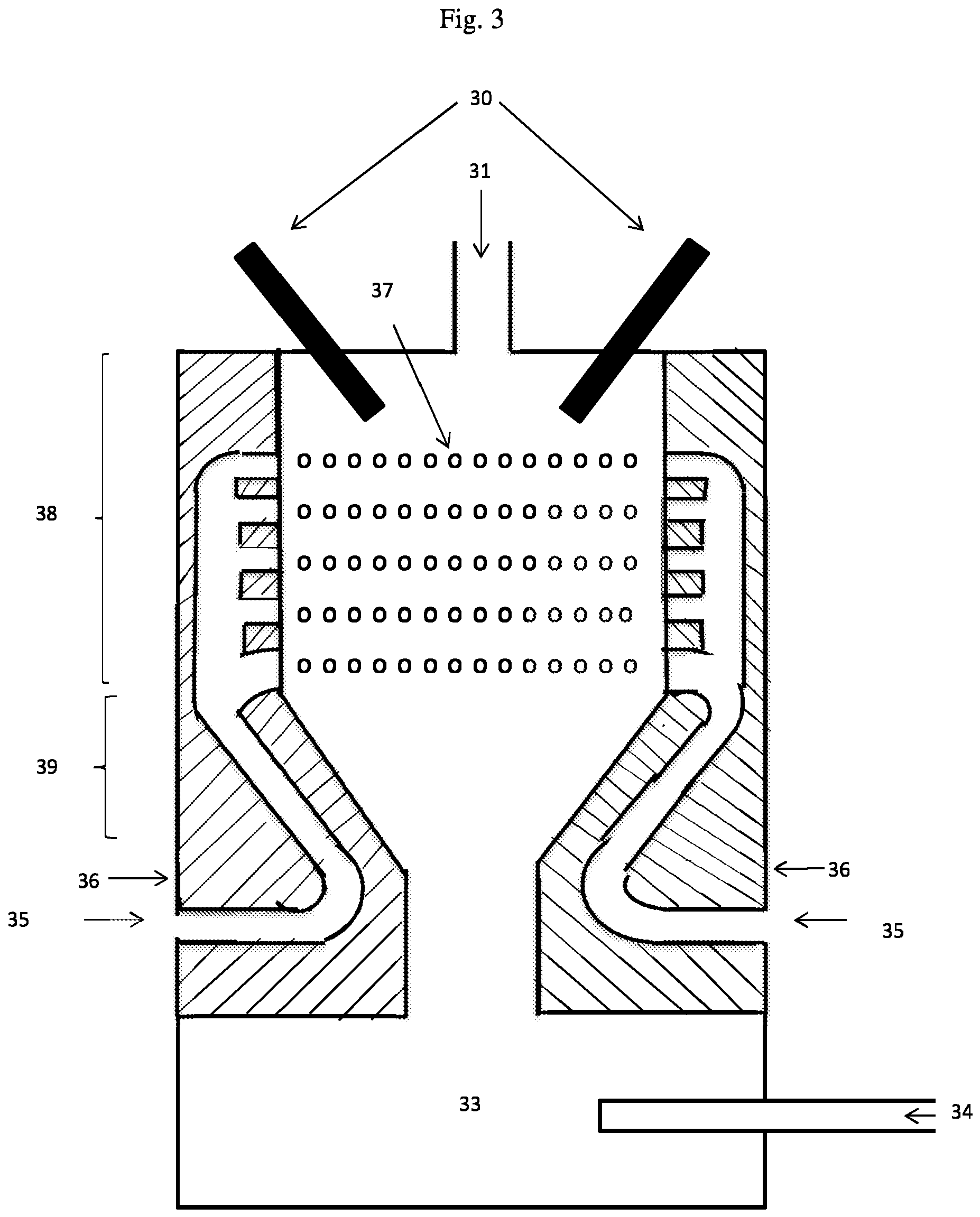