* Biodegradability, i.e., the metabolic conversion of the compostable material into carbon dioxide. This property is measured with a standard testing method, namely prEN 14046 (also published as ISO 14855: biodegradability under controlled composting conditions). The level of acceptance is 90% biodegradability (with respect to cellulose) to be achieved in less than 6 months.

* Disintegrability, i.e., the fragmentation and loss of visibility in the final compost (absence of visual contamination). Measured with a composting test on a pilot scale (prEN 14045). Samples of the test material are composted together with organic waste for 3 months. At the end, the compost is sifted with a 2-mm sieve. The mass of residue of the test material with a size greater than 2 mm must be less than 10% of the initial mass.

* Absence of adverse effects on the composting process, verified with a composting test on a pilot scale.

* Low levels of heavy metals (below predefined maximum values) and absence of adverse effects on the quality of the compost (e.g., reduction of the agronomic value and presence of ecotoxicological effects on plant growth). A plant-growth test (test OECD 208, modified) is carried out on samples of compost where degradation of the test material has occurred. No difference must be observed as compared to a control compost.

* Other chemico-physical parameters that must not change after degradation of the material under study: pH; saline content; volatile solids; N; P; Mg; K.

[0007] It will be appreciated that a biodegradable material is not necessarily compostable because it must also disintegrate during a composting cycle. On the other hand, a material that breaks up during a composting cycle into microscopic pieces that are not then, however, totally biodegradable is not compostable. UNI EN 13432 is a harmonized norm; i.e., it has been published in the Official Journal of the European Union and is adopted in Europe at a national level and envisages presumption of compliance with the European Directive No. 94/62 EC, on packages and package waste.
[0008] Capsules or cartridges for the preparation of coffee (or tea or other liquid products such as beverages) that are compostable according to the norm UNI EN 13432 can be disposed of in organic recycling (composting), for example envisaging that the spent capsules undergo a process of disintegration within a pre-set time (3 months).

[0009] The object of the present invention, which has the characteristics recalled in Claim 1, is to provide a solution that is able to combine characteristics of compostability and contained cost with a particular effectiveness of application and use of the cartridge.
[0010] Advantageous developments of the invention form the subject of the dependent claims.
[0011] The claims form an integral part of the technical teaching provided herein in relation to the invention.

[0012] The invention will now be described, purely by way of non-limiting example, with reference to the annexed figures, wherein:

- includes a compostable plastic material having a perforability of not less than 12 N (according to aSTM F 1306 90, rate of penetration: 300 mm/min); and

2. The cartridge (10) according to Claim 1, wherein said plastic material of the bottom (142) is chosen from among bio plastics such as PLA, PHA, and PBS.

5. The cartridge (10) according to any one of the preceding claims, wherein said bottom (142), exposed to the action of perforation of a bed of conical tips of a height of 3.5 mm and a diameter of the base of 3.9 mm that are made to advance through the bottom (142) for an amount equal to 2.5 mm, is perforated over at least 25% of the positions where the aforesaid perforation tips are located. 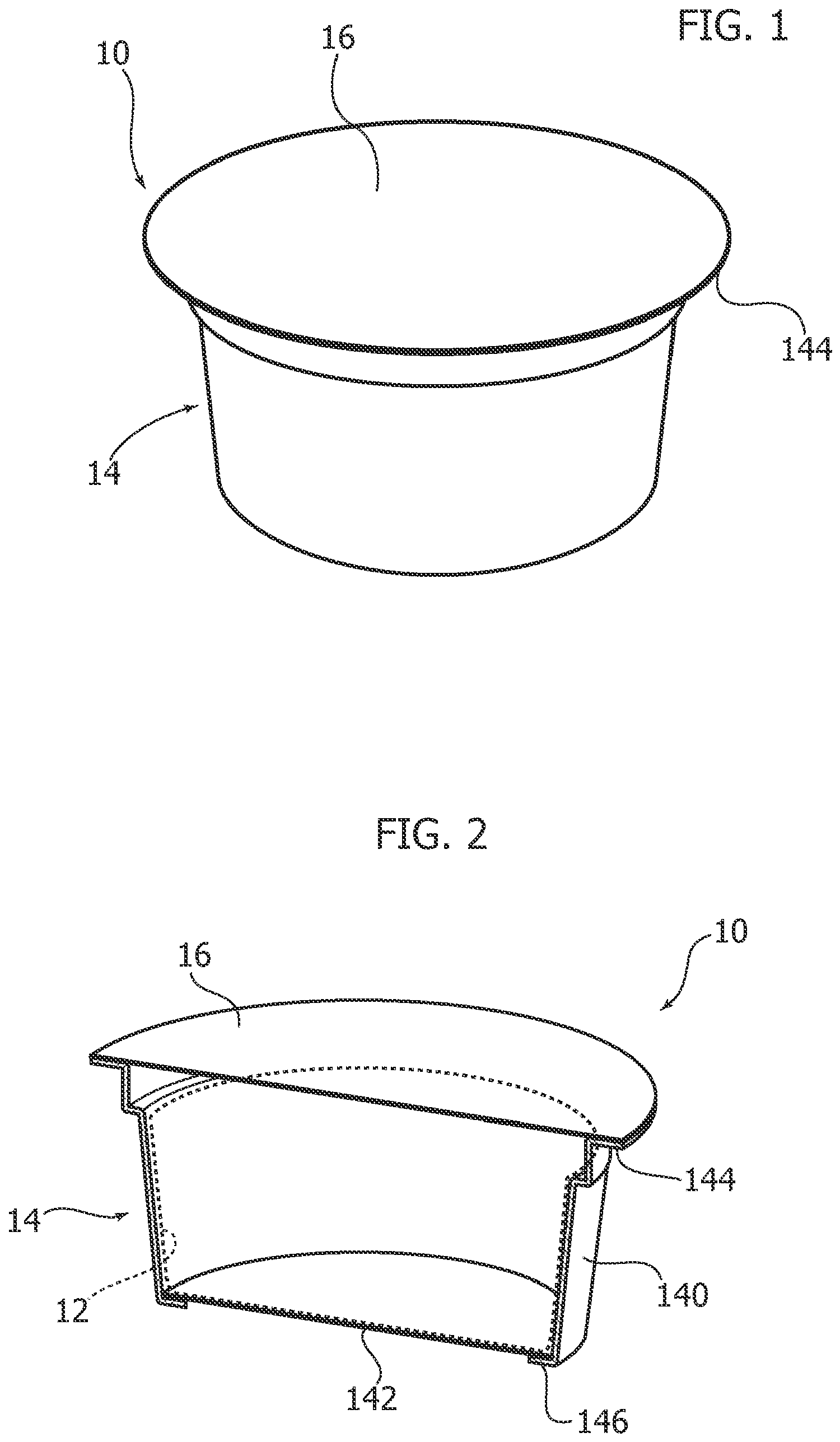