[0001] The present invention relates to targeting agents for tumor treatment, particularly, relating to the use of Heat Shock Protein 90 (HSP90) inhibitory peptide in preparing targeting therapeutic conjugates for treating tumors.

[0002] Malignant tumor seriously threatens the human health and improving the present therapeutic efficacy is an important mission for the medical researchers. Most of the current available chemotherapeutics exhibits a poor targeting capability with only 5-10% of administrated dosage accumulated in the tumor sites. Meanwhile, severe adverse side effects of these drugs also affect the optimized dosage, leading to incomplete recovery, relapse and drug resistance.
[0003] Tremendous clinical advances achieved for the tyrosine kinase inhibitors aiming at the specific mutation of signaling pathway in tumor tissues. For the people carrying genetic mutated phenotype, the molecularly targeted drugs are obviously effective with low adverse effects. However, molecularly targeted cancer therapy remains challenged by an extremely small proportion of patients that can benefit and the occurrence of drug resistance 10-12 months later. Cancer cells often find ways to compensate or replace for the blockage of the pathway, therefore pinpointing a single pathway is unlikely to eradicate cancer cells. Researchers pay more attention to the signal converging point and trying to developing drugs that simultaneously attack multiple targets to improve the therapeutic efficacy and action spectrum. In this regard, heat shock protein 90 (Hsp90) represents an attractive cancer therapeutic target.
[0004] Hsp90 is an abundant and ubiquitous molecular chaperone in the eukaryotic cell that plays an important role in regulating correct folding, maturation and stabilization of numerous nascent client proteins including enzyme, receptor and signal molecular. The cancer cells initiate protective mechanisms to antagonize the challenge of chemotherapeutics, including the rapid up-regulation of HSP90, which constitute the basis for chemotherapy adaption and resistance. Accordingly, Hsp90 is constitutively expressed at 2-10 fold levels in cancer cells than their normal counterparts [1]. Moreover, HSP90 is also highly expressed on the cancer cell surface [2]. About tens of oncogenic components are the client protein of HSP90, which make it important oncogenic signal converging point [3]. Inhibiting Hsp90 function will lead to degradation of multiple oncogenic proteins. HSP90 also participates the response to chemotherapeutics by regulating the autophagy, therefore inhibiting HSP90 is facilitated to improve the antitumor efficacy.
[0005] As stated in authorized patent (Patent Number: ZL201310258476.0; Patent Title: A tumor specific targeting peptide and thereof use), a targeting peptide (Amino acid sequence: LPLTPLP, hereinafter referred to as P7) was screened by phage display technique, and was conjugated to the Docetaxel-loaded polylactic acid nanoparticles for the preparation of medicines for early diagnosis and treatment. The conjugated nanoparticle obtained from the targeting peptide and the Docetaxel-loaded polylactic acid was hereinafter referred to as targeting nanoparticle preparation (TN-DTX).
[0006] WO 2014/080251 A1 discloses antibody-drug conjugates and anticipates antiHsp90-antibodies as suitable targeting moieties.
[0007] Christiane Fischer et al., "A Bombesin-Shepherdin Radioconjugate Designed for Combined Extra- and Intracellular Targeting", Pharmaceuticals, vol. 7, no. 6, 27 May 2014, pages 662-675, disclose shepherdin linked to cytotoxic 99mTc.
[0008] WO 2013/158644 A2 is directed to pharmacological compounds including an effector moiety conjugated to a binding moiety that directs the effector moiety to a biological target of interest. The compounds can be described as a protein interacting binding moiety-drug conjugate (SDC-TRAP) compounds, which include a protein interacting binding moiety and an effector moiety. In certain embodiments directed to treating cancer, the SDC-TRAP can include an Hsp90 inhibitor conjugated to a cytotoxic agent as the effector moiety.

Figure 1 shows that the binding protein of targeting peptide is HSP90.

Figure 3 refers to the mass spectrometry of DTX-P7.

Figure 4 refers to the body weight changes of nude mice in the different groups.

Figure 6 refers to the relative volume of the tumors from DTX, DTX-P7, TN-DTX treated groups.

[0035] The following embodiments furthermore illustrate the content of this invention, but understandably should not be interpreted as in any way limiting its scope. It will be understood by those skilled in the art that the present invention may be implemented in a different specific form without changing the technical spirit or essential characteristics thereof. The scope of the invention is defined in the claims. Unless specialized, the employed techniques in the present invention are conventional methods for those skilled in the art.

Embodiment 1: Binding protein of targeting peptide and its effect on the HSP90 expression

[0036] The protein was extracted with protein extraction kit and subjected to SDS-Page electrophoresis. The interesting protein was recovered and digested with trypsin, then analyzed by mass spectrometry. As shown in Figure 1, molecular weight of band A was 53Kd, which was consistent with that of HSP90kDα. Molecular weight of band B was 48Kd, consistent with that of HSP90 kDβ. Therefore, the target of peptide is identified as HSP90 (Figure 1).

Embodiment 2: Effect of targeting peptide on the expression of HSP90

[0037]
[0038] Results showed that targeting peptide effectively down regulated the expression of HSP90 in a dose-dependent manner (Figure 2A), indicating the peptide is a HSP90 inhibitory peptide.

Embodiment 3: Effect of targeting peptide on the apoptosis

Embodiment 4: effect of targeting peptide on the autophagy 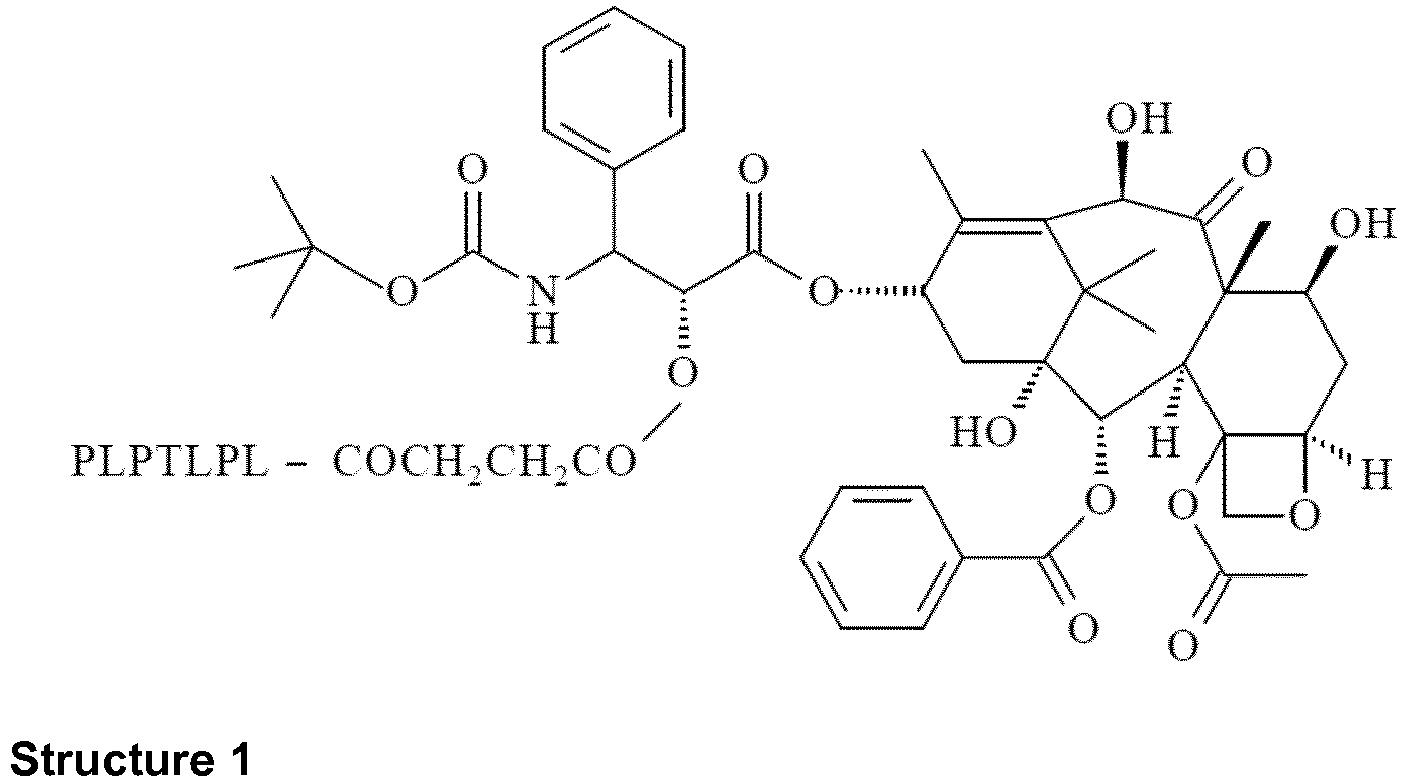 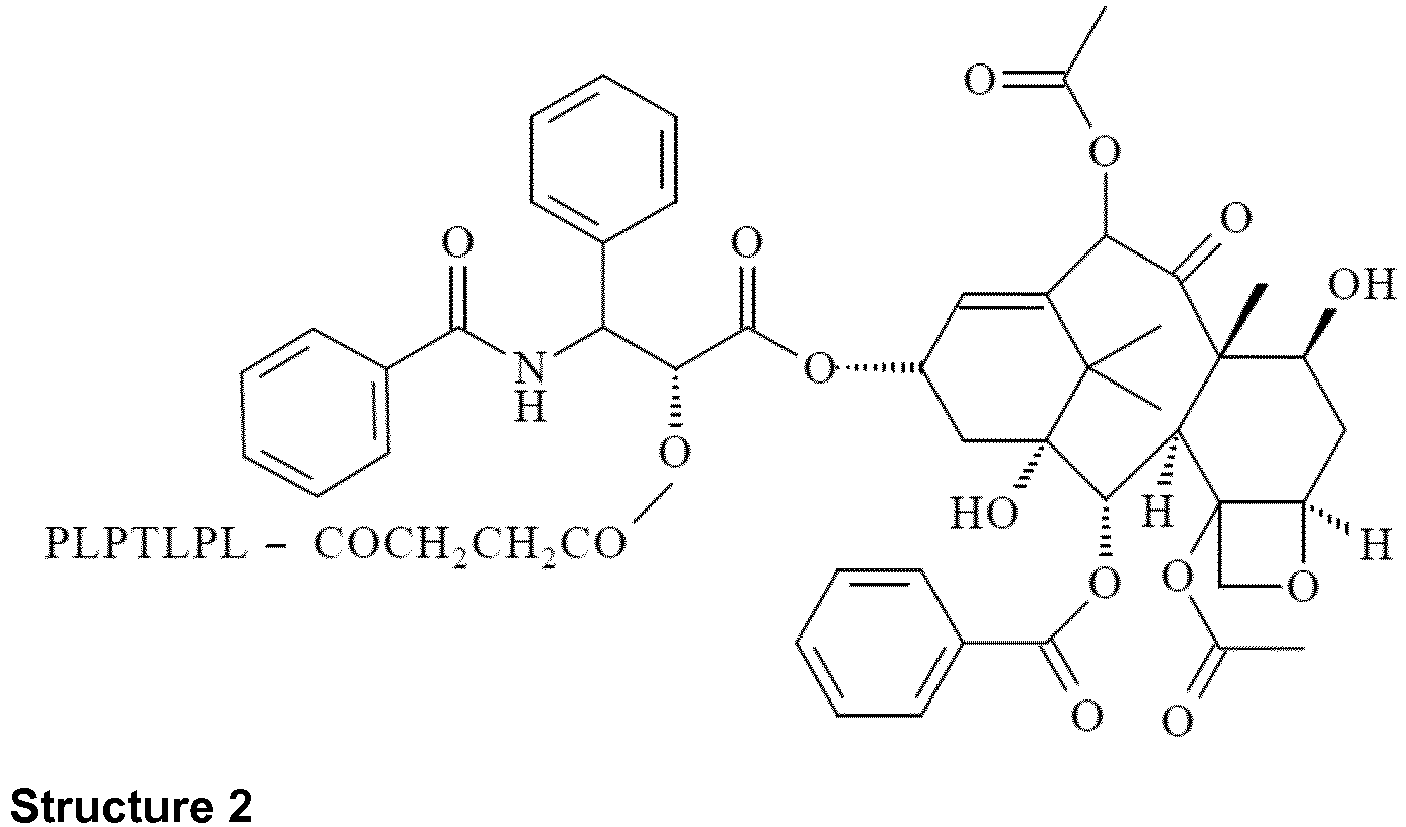 [0047] A549 cell, a non-small cell lung cancer cell line, growing in logarithmic phase were collected and gently pipetted with 1 ml F-12K media containing 10% PBS to prepare the single cell suspension, which was consequently counted with appropriate dilution. The cell suspension was mixed with Matrigel (1:3) under ice bath. The concentration of the cell suspension was adjusted to 8×106 cells /ml and stored at 0°C before transplantation.
[0048] Thirty BALB/c nu/nu female nude mice (16g) were acclimated to the environment for 1 week before the formal experiment. When cell transplanted, A549 cell (8×105cells/100µl) was subcutaneously (s.c.) injected into the right side of the axilla of the animal after carefully disinfected with iodophor. State of the mice were observed before they were returned to rearing cage.

[0049] The mice were frequently observed and tumor volume was measured with a Vernier caliper, the volume was calculated by the equation (long diameter x short diameter2) (1/2), When tumor reaching a size of 100 mm3, mice were divided into 4 groups: (1) Saline (control), (2) DTX, (3) TN-DTX and (4) DTX-P7.
[0050] Next day after animal grouping, agents were administrated via intraperitoneal injection once a week for a total of four injections. The first administrated day was recorded as Day 0 and the other administrated days were respectively recorded as Day 7, Day 14, Day 21. The dosages are uniform 10 mg/kg based on the mass of DTX.
[0051] The mice were measured and weighted every two times a week. Tumor dimensions were measured using calipers. Tumor volume (V) and relative tumor volume (RTV) were calculated with the following equations:

(where a represents long diameter, b represents short diameter)
RTV=Vt/V0 (where V0 represents the tumor volume measured at first drug administration, Vt represents the tumor volume measured at t day)
[0052] The first day of the fifth week after the first injection, (28 day), the mice were sacrificed with an intraperitoneal injection of 0.5 % pentobarbital sodium solution (50 mg/kg). The tumor tissues were resected and weighed. A part of tumor tissue was stored in 4% paraformaldehyde solution at 4 °C and the remaining part was stored at -80 °C.
[0053] The body weight was also monitored during the in vivo studies and there was no significant difference in body weight among four groups indicating a good safety (Figure 4) for all DTX preparation. The changes of tumor volumes of each group were showed in Figure 5 and further presented as curve graph in Figure 6. The results showed that all the DTX, DTX-P7, TN-DTX exerted obvious inhibitory effects on the tumor growth. DTX-P7 obviously inhibited the tumor growth. Particularly, DTX-P7 exhibited robust tumor regression with a significant difference compared with the CON group from the 4th day (p < 0.05). The efficacy of DTX-P7 was superior to that of DTX, and the targeting nanodrug TN-DTX which was publicized in the inventor's previous patent (p<0.01). These data suggested that the inhibitory effects of DTX-P7 was not a simple superposition of DTX and targeting peptide, but a surprising suppressing effect. The inhibitory effects of DTX-P7 was remarkable compared with the previously publicized TN-DTX. Results showed that conjugate of HSP90 inhibitory peptide conjugating with DTX via linker present remarkable advantage for suppressing tumor growth when compared with the previously publicized nanodrug TN-DTX.

[0054] Lung adenocarcinoma A549, breast cancer MCF-7S and melanoma A375 cells were diluted respectively to 3× 104 cells/ ml and pipetted to 96-well plate with 100µl in each well. Twenty-four hours later, 5, 20, 80 or 320 nM DTX-P7, Paclitaxel-heptapeptide conjugate (PTX-P7), Doxorubicin-NH2- heptapeptide conjugate (DOX-P7) and Doxorubicin-OH-heptapeptide conjugate (DOX-OH-P7) were added to the wells and incubated for 48h. Then 10µl CCK-8 was added and measured 1.5 h later at 450nm to calculate the viability and median inhibitory concentration IC50. Results in Table 1 showed that the four conjugates exerted excellent inhibitory effects to diverse tumor cells indicating a potential for a variety of cancer treatment.
Table 1. the cytotoxicity of four conjugates for diverse tumor cells (IC50, nM) 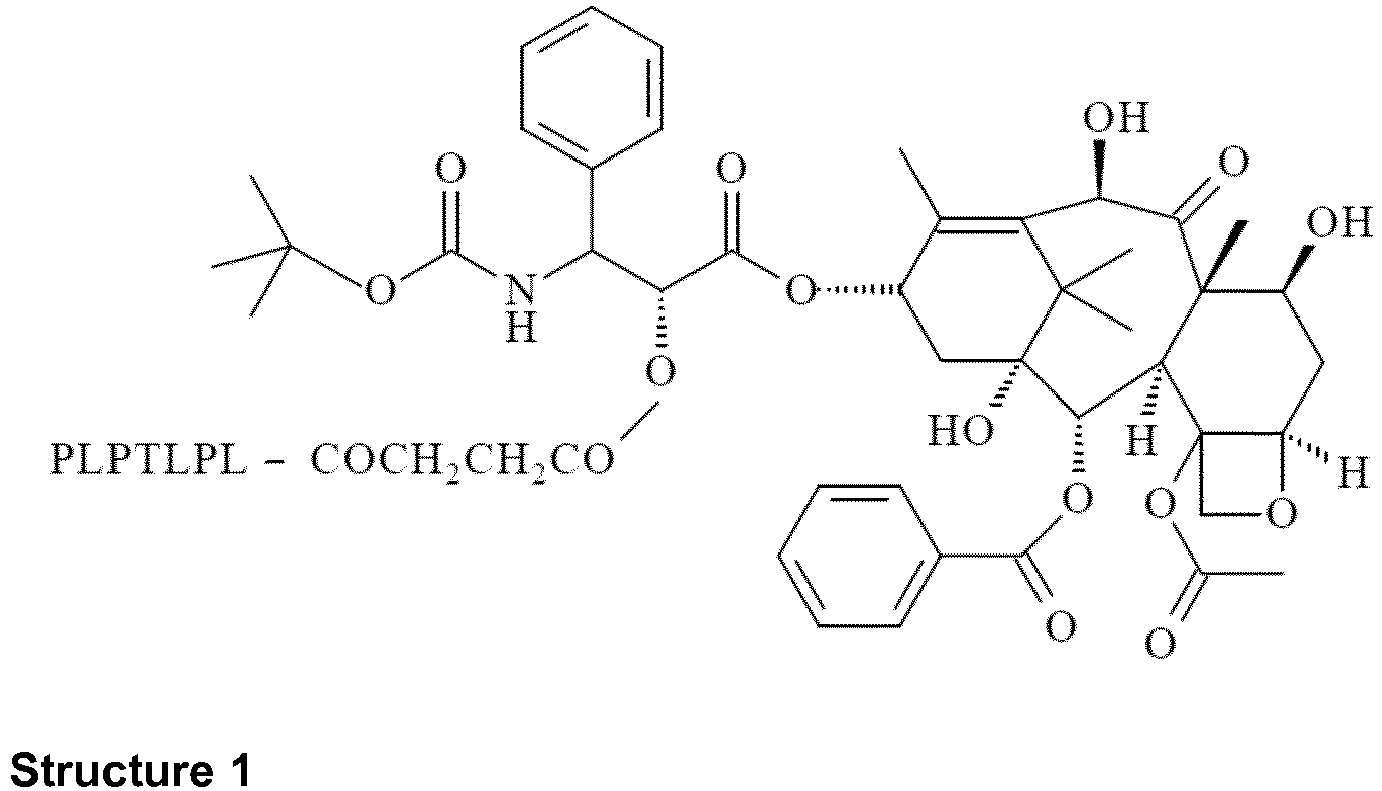 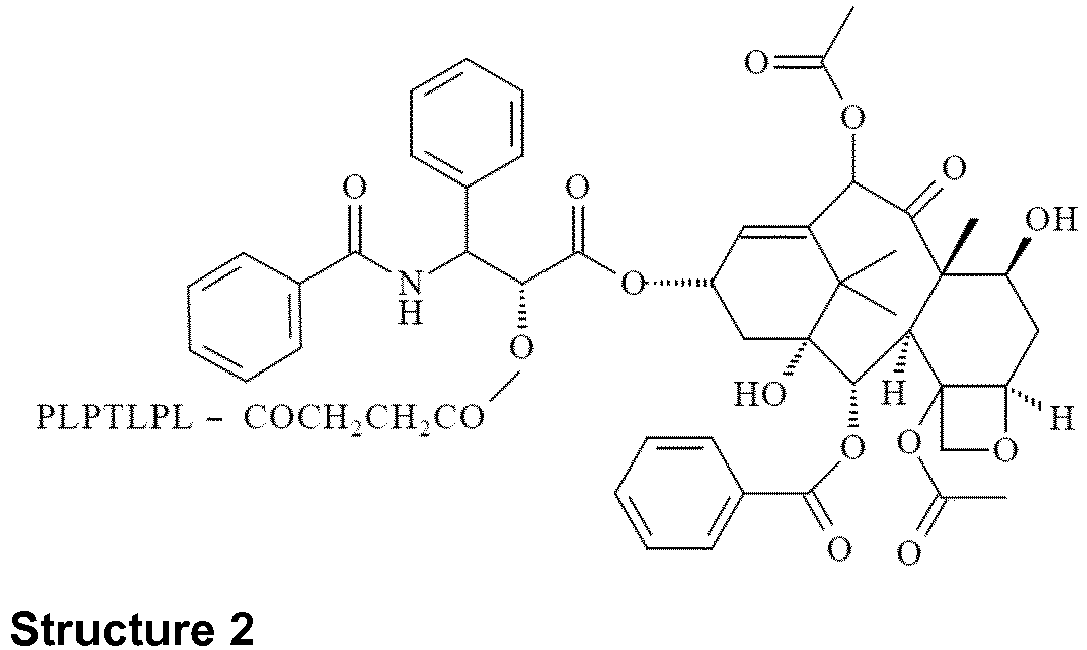 wherein the amino terminal of the HSP90 inhibitory peptide is at L in all Structures 1 to 4, and PLPTLPL in Structures 1 and 2 represents the HSP90 inhibitory peptide in C->N direction
7. The conjugate according to any one of claims 1-6 for use in a drug for preventing and / or treating tumor.
8. The conjugate for use according to claim 7, wherein the tumor is HSP90 highly-expressed tumor, preferably being selected from lung cancer, lung adenocarcinoma, melanoma, gastric cancer, breast cancer, renal carcinoma, liver cancer, oral epidermoid carcinoma, cervical cancer, ovarian cancer, pancreatic cancer, prostate cancer, colorectal cancer and neural tumor, more preferably from lung adenocarcinoma, breast cancer and melanoma, further preferably being lung adenocarcinoma.
9. A tumor targeting agent for inhibiting tumor progress, comprising the conjugate according to any one of claims 1 to 6 and pharmaceutically acceptable excipient. 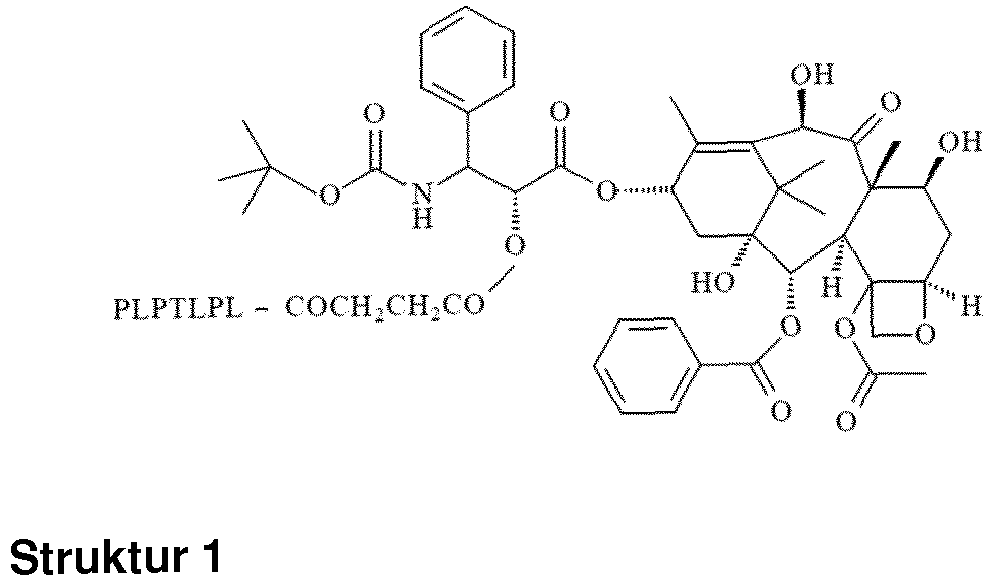 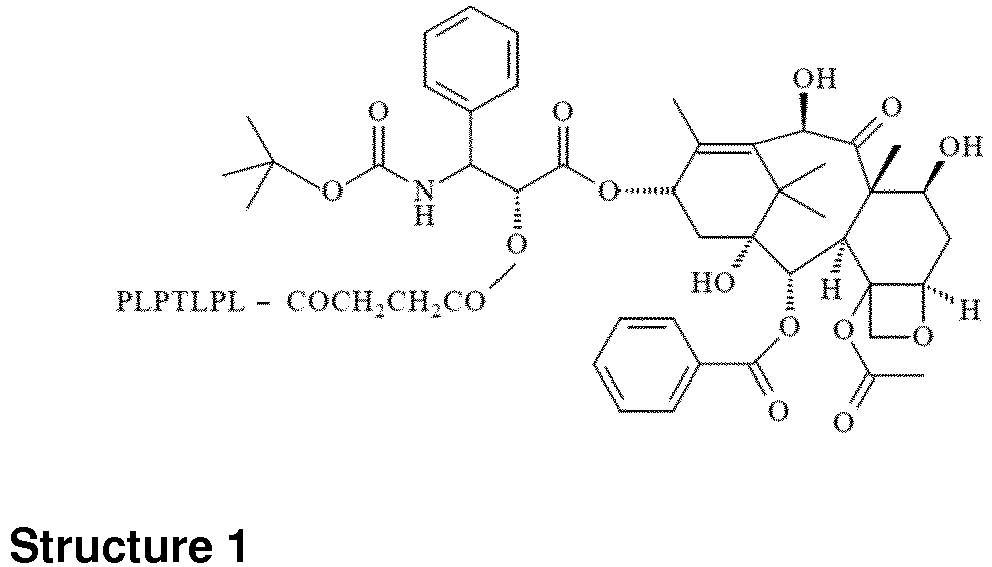 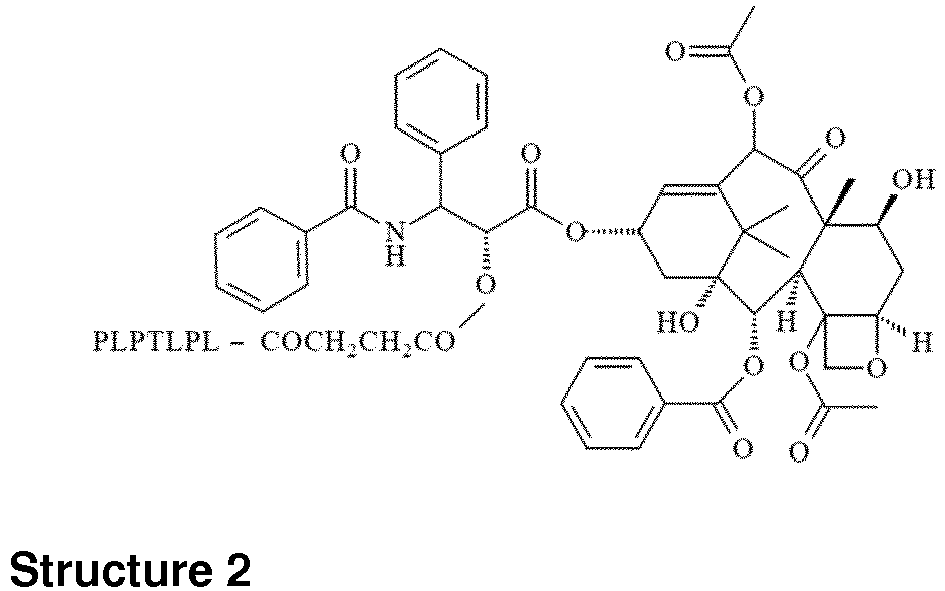 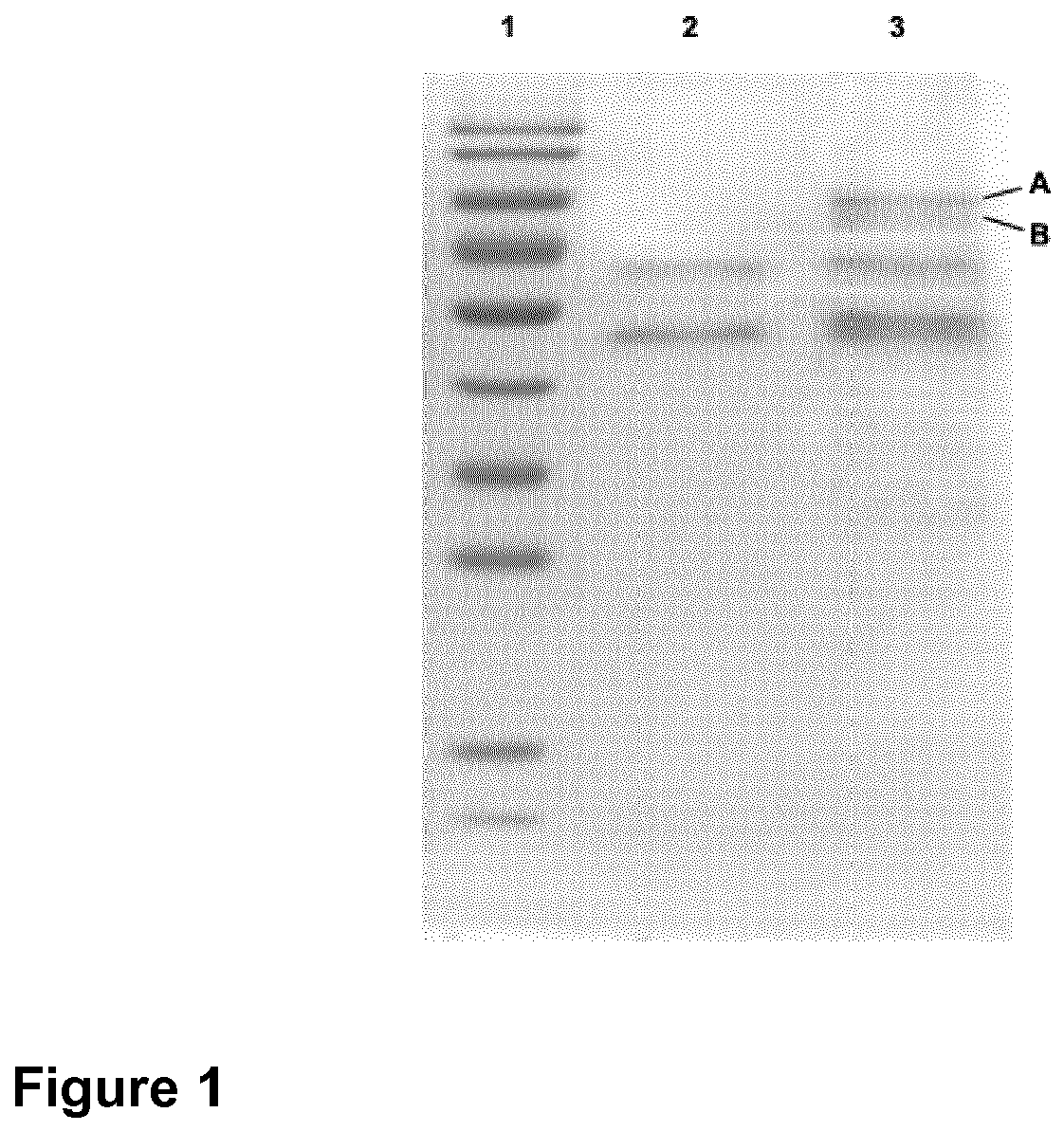 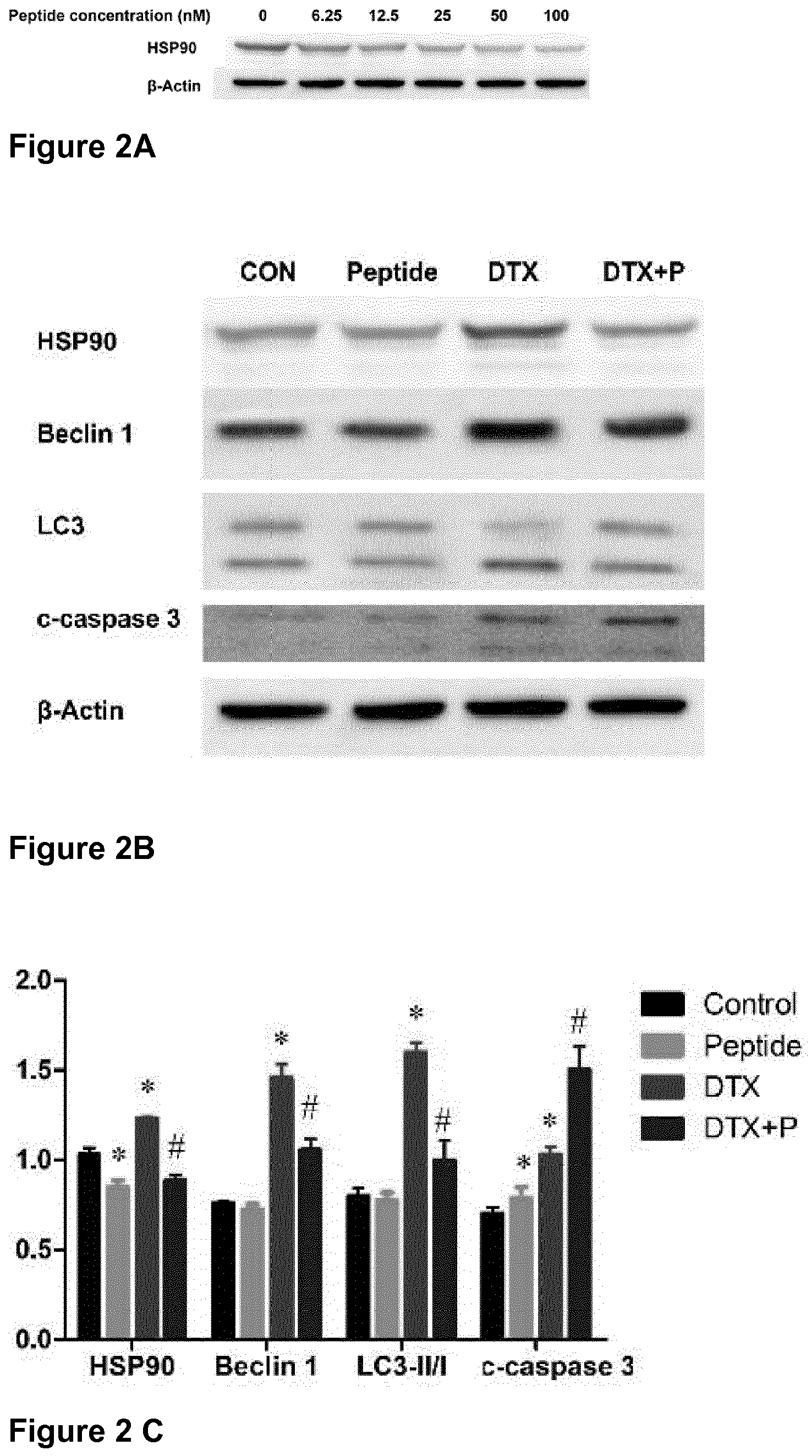 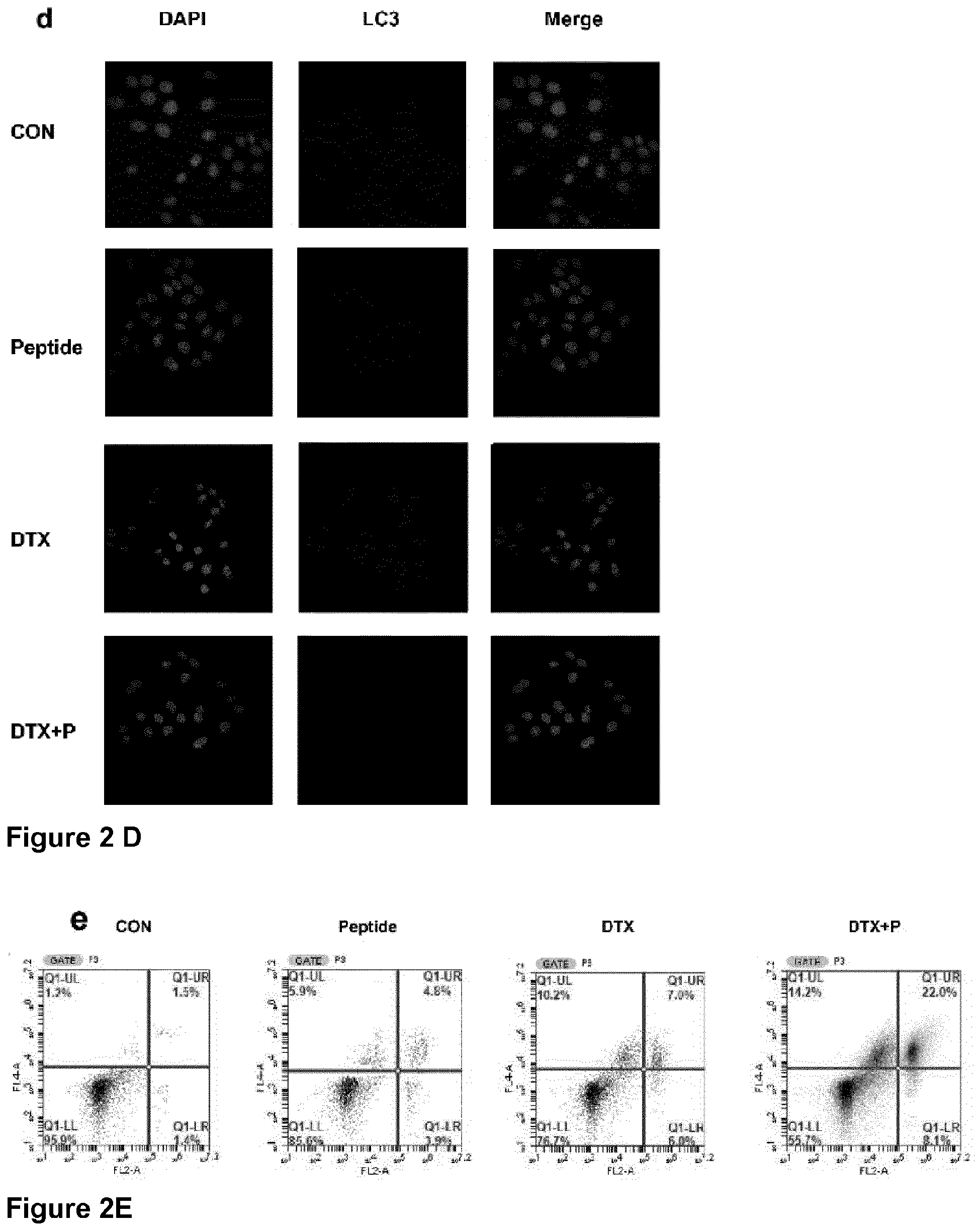 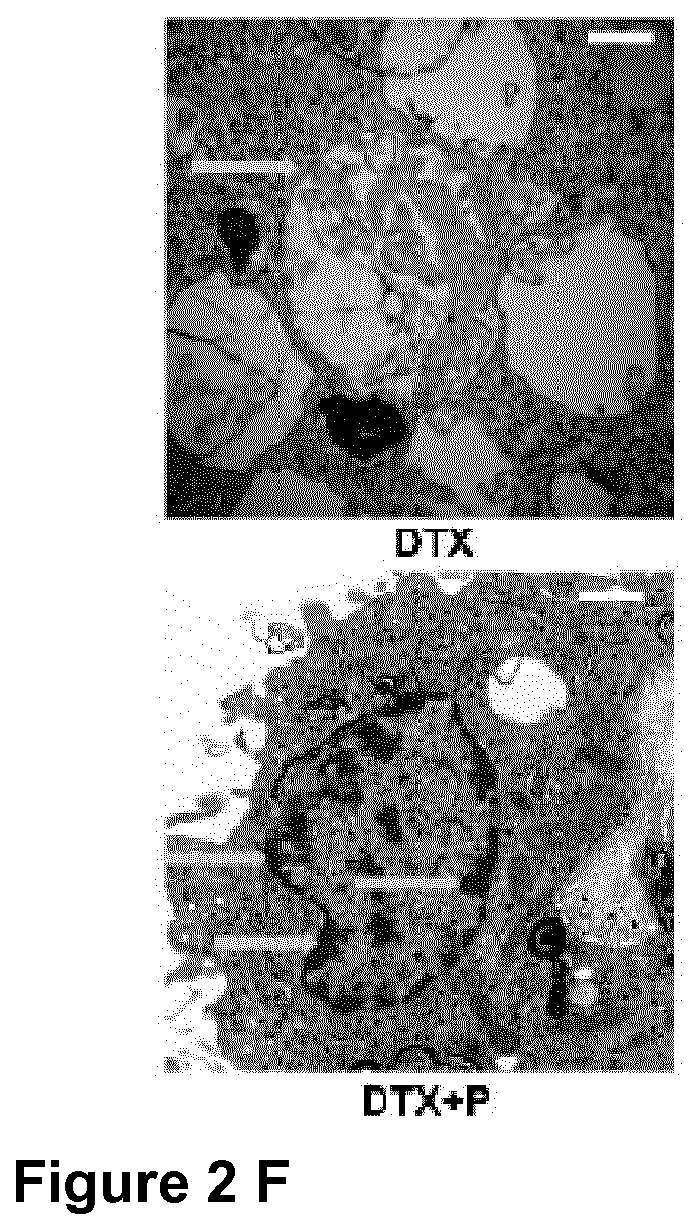 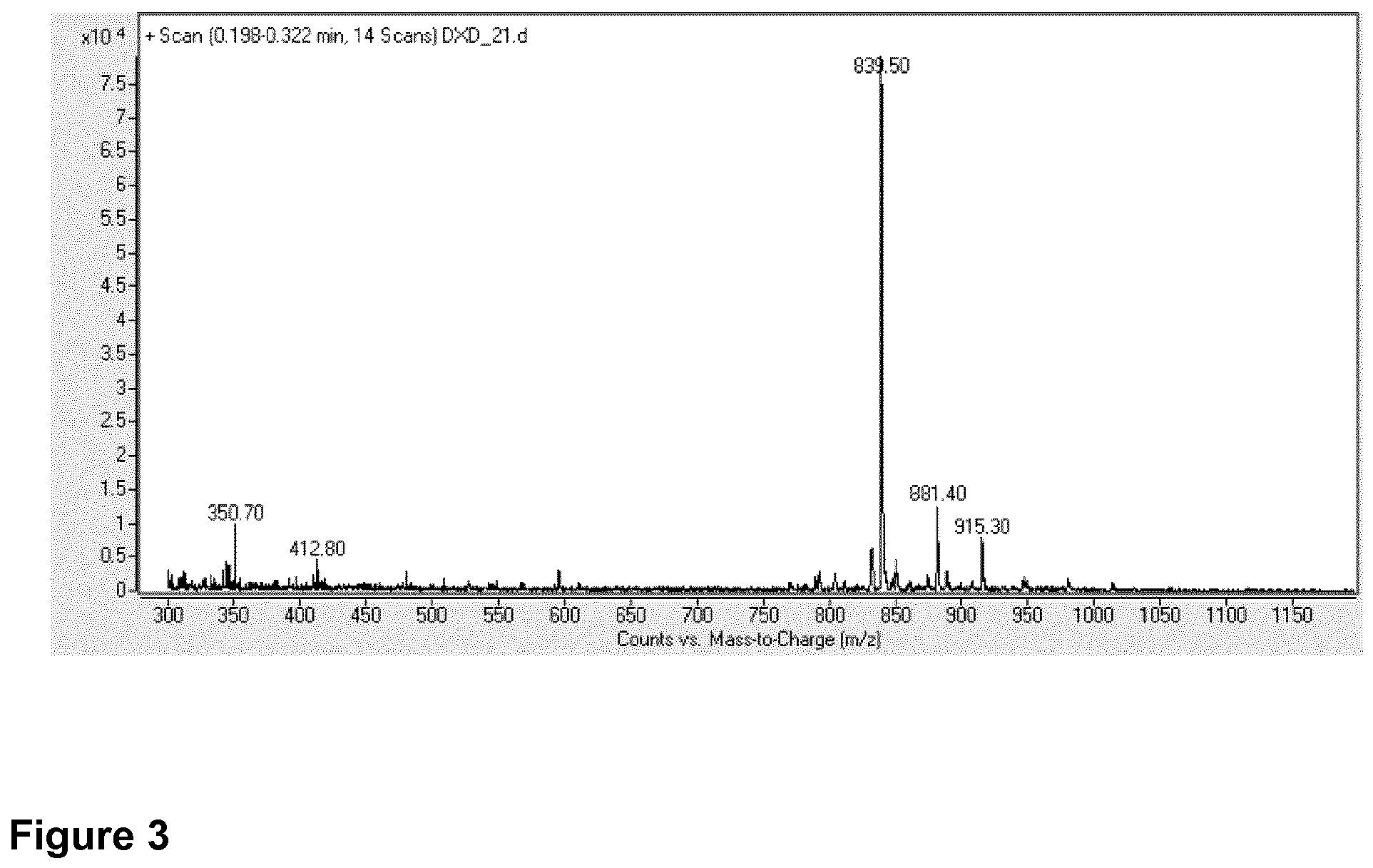 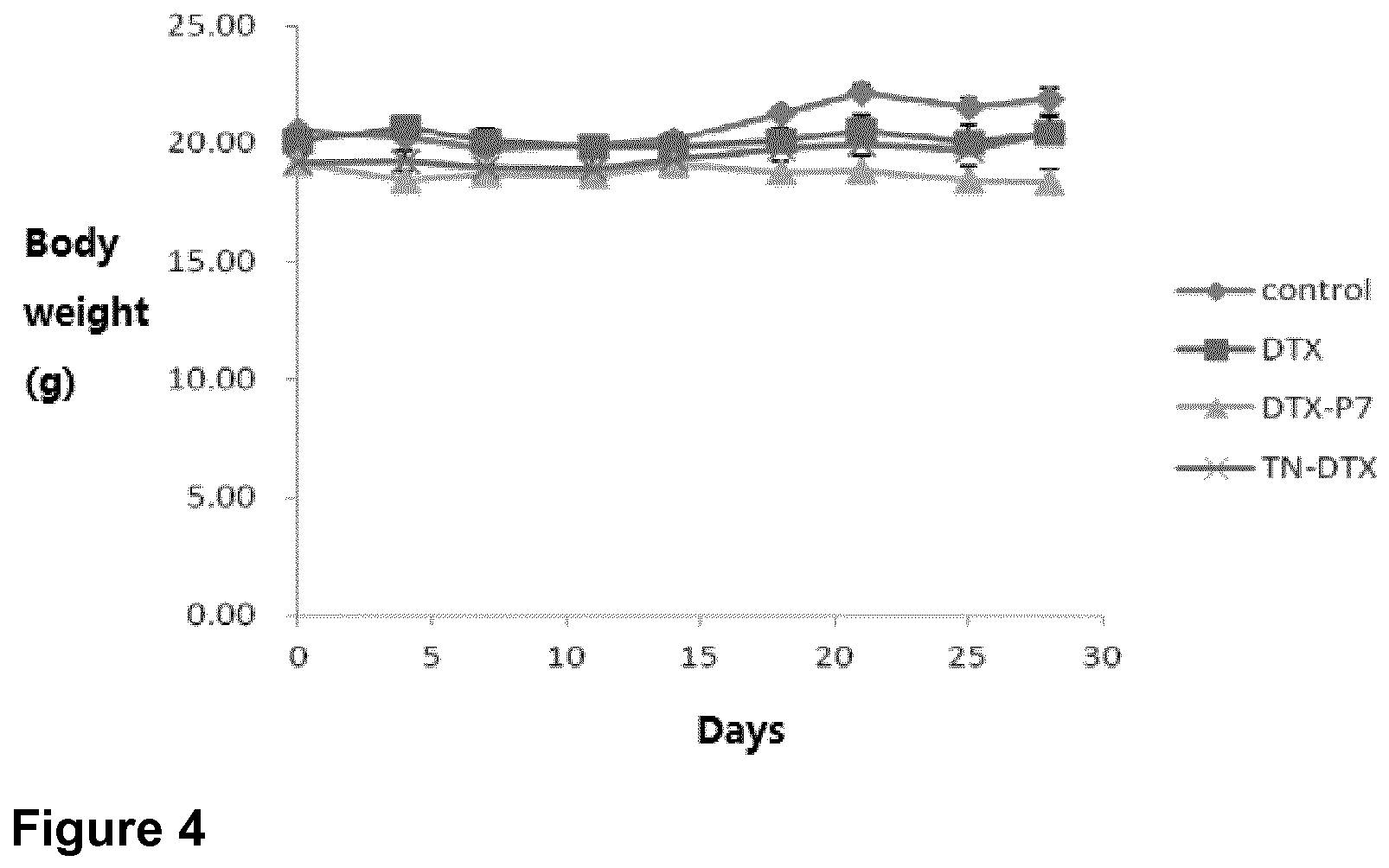 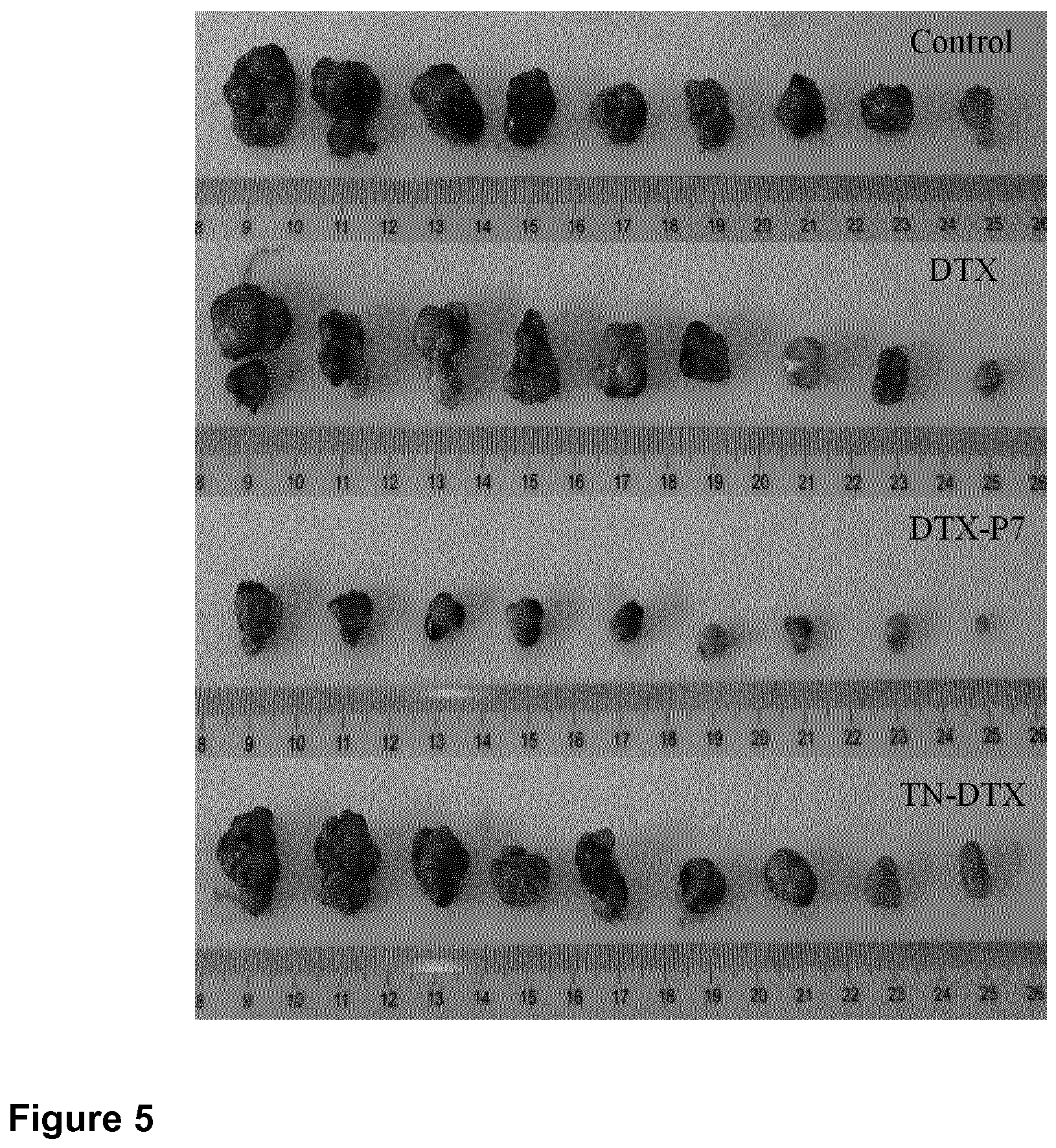 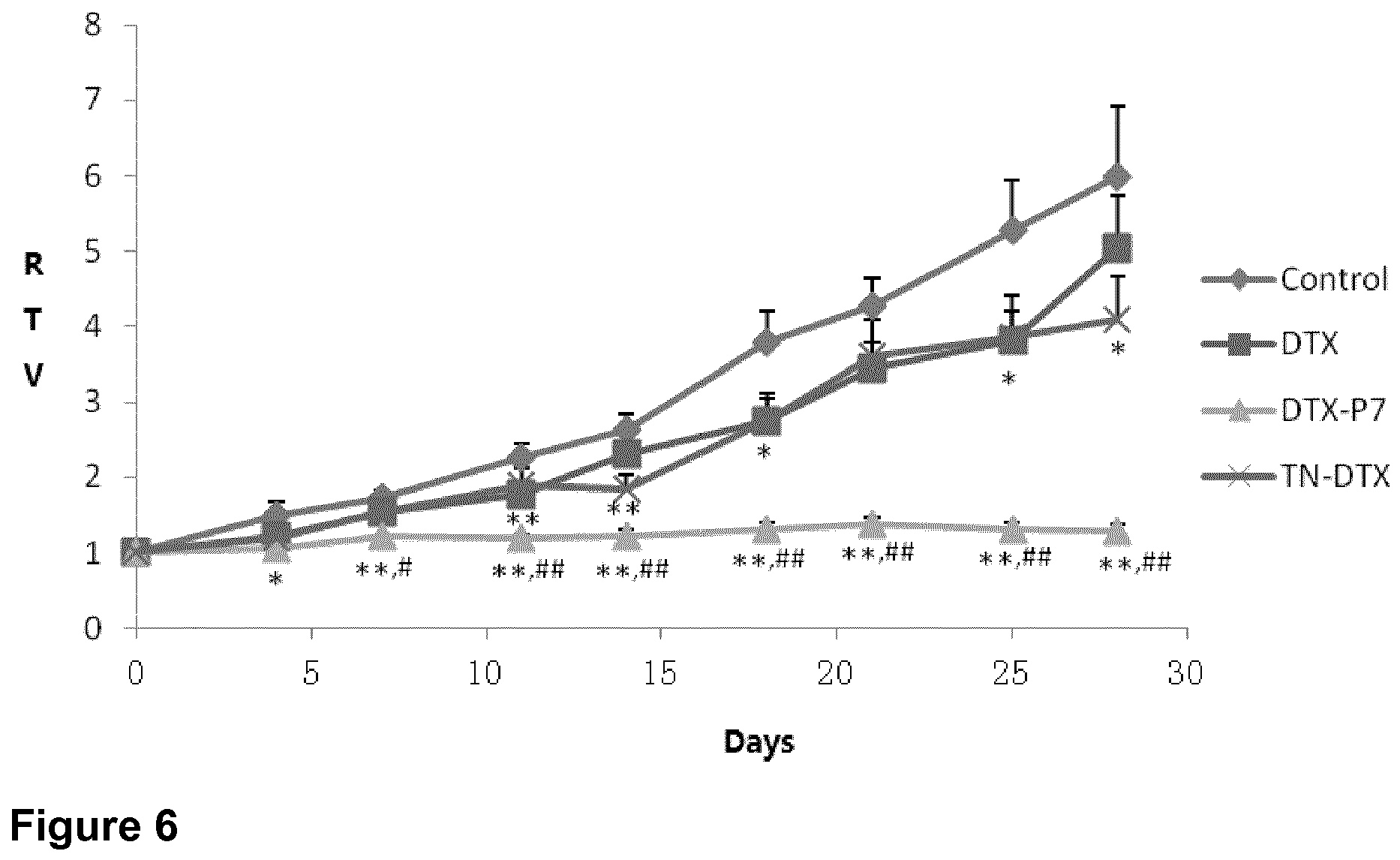