[0038] In the system and method according to the present invention, the ECS (213) automatically adapts to the power plant configuration and type of MGSs and energy storage units, such as batteries or capacitors, and calculates the total amount of available load ramp at any particular instant (kW/s). The calculated total load ramp values are sent to the DP control system and used so that the changes in the thruster command signals provided by the Thrust Allocation Optimization (212) are always harmonized with the changes in the maximum load ramp signals. In another embodiment, the system automatically takes into account the change in dynamic or available instantaneous power capacity based on characteristics of the connected MGS and battery units, since the dynamic capacity of the battery may vary substantially based on the charge/discharge rate for the battery. Charge/discharge rates are typically associated with the operating conditions, such as temperature, of the battery. If, for example, the battery has been driven close to or higher than its normal C-rating, the battery temperature will typically rise, which may require that said battery to be operated at a lower power delivery rate (kW/s) and/or maximum total discharge (kW) for a certain time after a high load operation, for example, a quick discharge. The kW/s value is further sent and used inside Consumer Load Control (206) as an extra protection or for other consumers not controlled by DP.
[0039] In yet another embodiment of the present invention, if the DP control system finds that the total available load ramp (kW/s) value is less than that required in a particular scenario, the DP system communicates a signal to the ECS module (213) indicating the shortfall from said requirements. In another embodiment of the present invention, the ECS (213) raises the setpoint of one or more MGSs, or issues a start command to one or more MGSs in standby to meet the requirements communicated by the DP system.

[0040] In an embodiment of the present invention, the system uses LF feed forward power demand forecast in the ECS to set the base load setpoint on the running MGS units. By doing this a stable loading of the running MGS units is achieved. The MGS are compensated according to the LF weather forecast and prediction models in the DP system. The variable loading conditions are absorbed by the energy storage units, such as batteries or capacitors. According to the proposed feature, the system does not need to wait for the charge state of the battery to change to move the setpoints for the MGS units. The system, hence acts proactively as opposed to the reactive nature of the conventional systems, including those employing hybrid power suppliers. This is summarized as a simplified comparison of the present invention with the traditional non-hybrid and traditional hybrid schemes in the following table (Table I).
TABLE I: Comparison of the Present Invention with Traditional Power Systems.

computational means configured to compute and predict power and energy requirements in the power plant for varying time spans into the future, based upon data including, said parameters monitored by the measurement means, pre-determined models, and expected energy flow trends related to said at least one power generator, said at least one energy storage element, and said at least one consumer,

adapting set-point of said at least one power generator; and

setting load limitation on said at least one consumer; and
characterised in that the system further comprises a Thrust Allocation Optimization module (212) and a Force Demand Adder module (203), which is configured to solve an optimization problem, utilizing a low-frequency force demand signal computed by said Force Demand Adder module, for further calculating a low-frequency power demand value for said propulsion device; and said low-frequency power demand value is further transmitted as a feedforward signal for said pre-planning and said allocation of power and energy in the power plant and

wherein said DHC unit further comprises an Energy Control Unit (213), configured to compute a maximum available load ramp (kW/s) value based upon the status of said at least one energy storage device and said at least one power plant.

3. System according to Claims 1 and 2, wherein said energy storage device is a battery.

4. System according to Claims 1 and 2, wherein said energy storage device is a capacitor.

5. System according to any of the above Claims, wherein said measurement and computational means comprises, at least partially, a Dynamic Load Prediction system.

6. System according to any of the above Claims, wherein said at least one consumer includes, propulsion device, such as thruster and propeller, and rudder.

7. System according Claims 1, 2 and 6, wherein said at least one consumer is adapted by an individual control module associated with each of the consumer.

9. System according to Claims 1 and 2, wherein the system also comprises a Thrust Allocation Module (211), said Thrust Alocation Module configured to solve one or more non-linear optimization problems to calculate parameters including, thrust amount, load rate, and direction for each of the propulsion devices, for minimizing said overall energy consumption in the power plant.

10. System according to any of the above Claims, wherein the DHC unit comprises wherein the system is configured to solve an optimization problem based upon a force allocation signal issued by the DP system and said maximum available load ramp value, and to then issue a command signal for said propulsion device such that said command signal for said propulsion devices is always harmonized with said maximum available load ramp signal.

11. System according to Claim 10, wherein said feedforward signal related to the low-frequency power demand value is used by the Energy Control Unit for adapting the base load for said at least one power generator.

13. System according to any of the above Claims, wherein the system also comprises a State of Charge Load Control Unit for said at least one energy storage device, configured to issue a battery State of Charge (SOC) signal, wherein the system is configured to use said SOC signal and said energy requirements predicted by the computational means to adapt the setpoint or base load of said at least one power generator.

15. System according to any of the above Claims, wherein said prediction of power and energy requirements includes models, lookup tables and energy consumption profiles for said at least one consumer under different operating conditions. 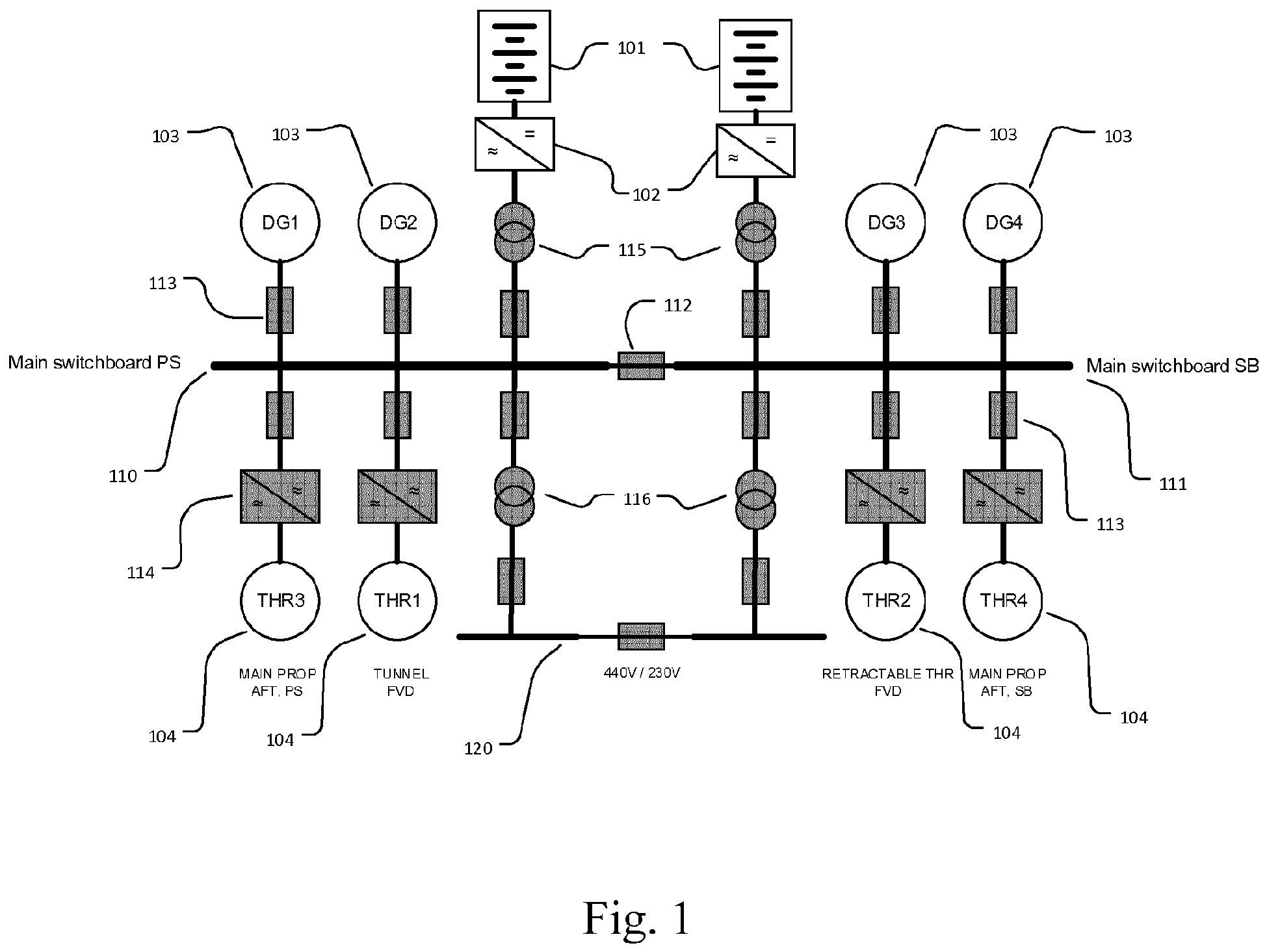 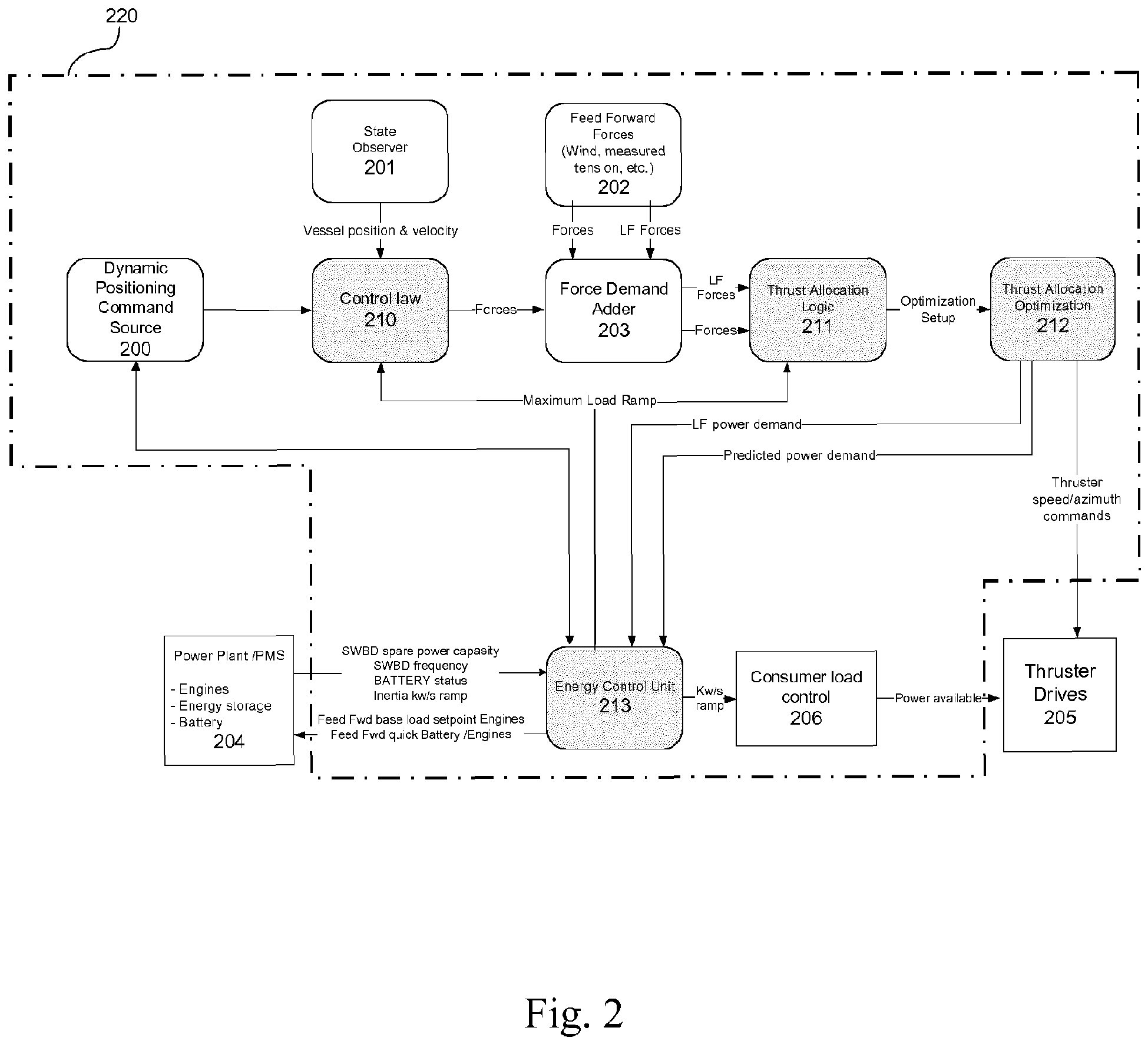 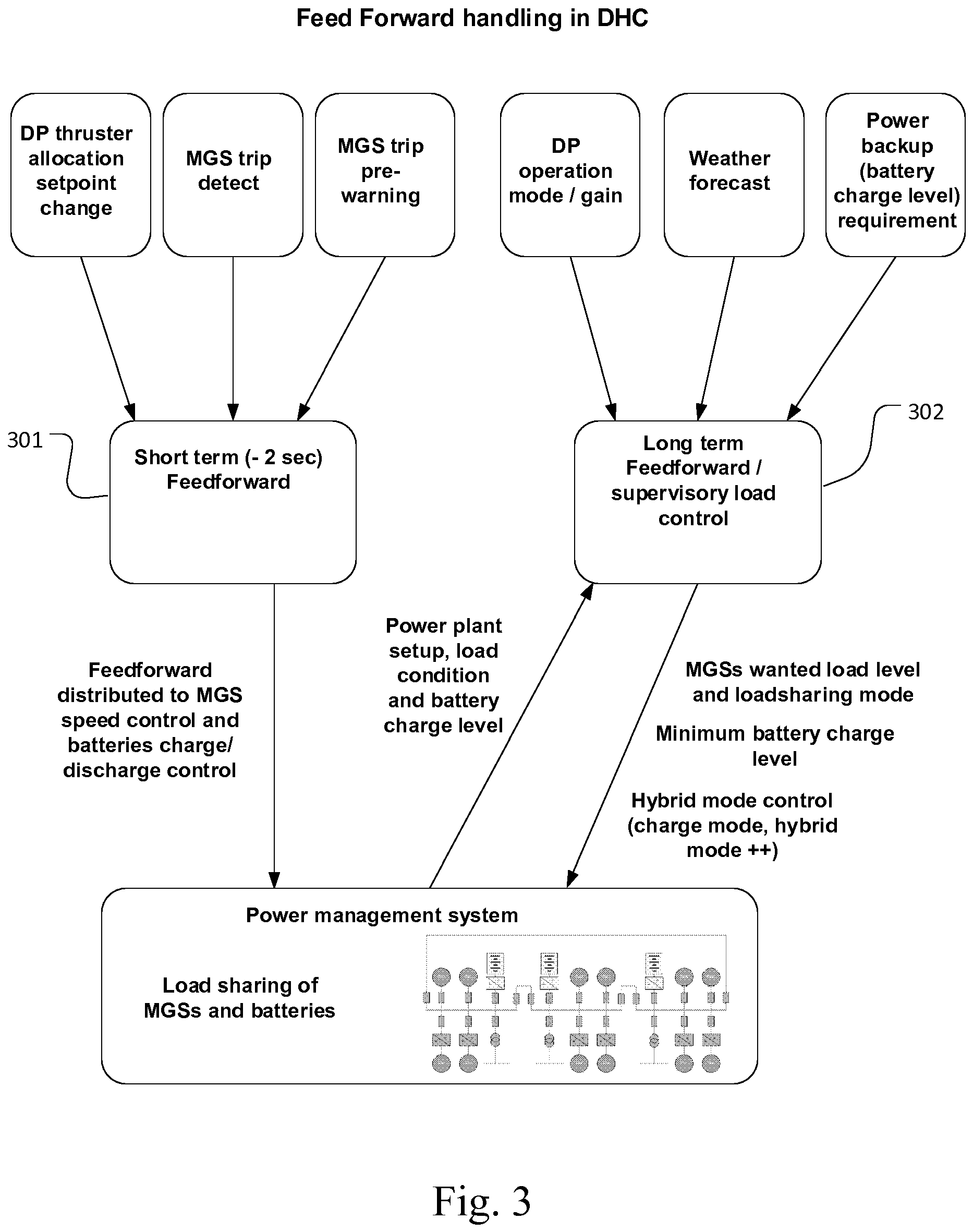 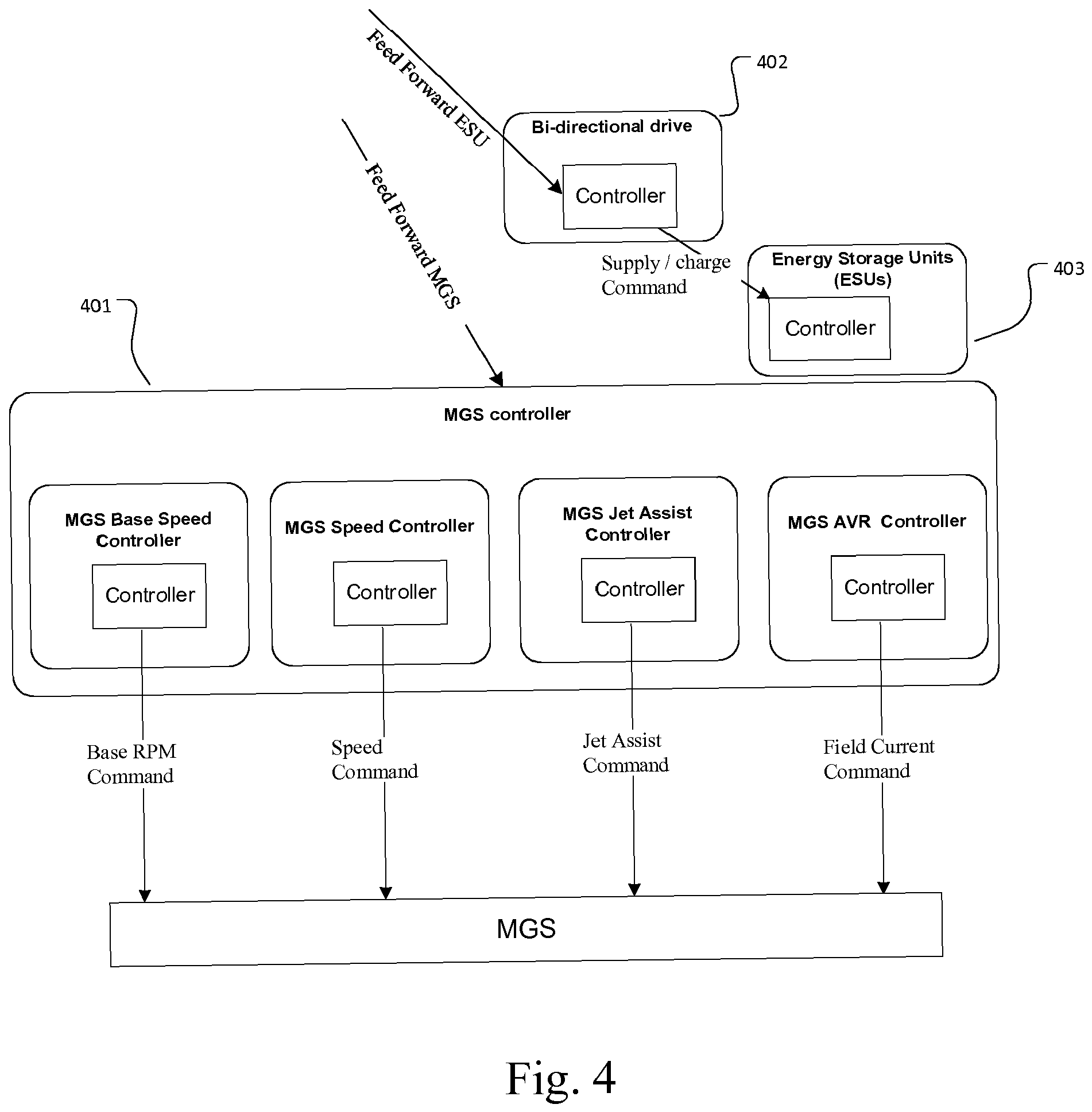