[0001] The present invention relates to a stand-alone module for controlling the usability of a device, and particularly for remotely controlling such a device. More specifically, the module may be connected to impede full operation of a processing unit of such a device.

[0002] An old problem related to any type of device of value, is the risk of losing the device by accident or by theft. It must often be acknowledged that a lost or stolen device will probably not be returned to its rightful owner as long as the device is fully usable and the identity of the owner is unknown. For articles of manufacture, which are configured to be communicatively connected to a network, such as computers and mobile phones, various suggestions have been made regarding means for overcoming this problem. Most existing protection and tracking solutions are built in as a preventive action that needs to be activated by the user in order to protect the device. Existing password based solutions will protect a device to some extent but can be overcome. Existing tracking solutions using accounts and connectivity are dependent on a lot of prerequisites in order to be operational and effective. Other prior solutions include the following disclosures.
[0003] US8509737 describes a security module configured to authenticate a telecommunications network. The security module comprises a locking module for disabling usability of an application module, an unlocking module for re-enabling usability of the application module, and a control module for activating the unlocking module depending on received data that is assignable in an authenticated way to a specific telecommunications network (2).
[0004] US8812837 relates to a method that incorporates storing, by a universal integrated circuit card (UICC) including at least one processor, a digital root certificate locking a communication device to a network provider, and disabling an activation of the communication device responsive to receiving an indication of a revocation of the stored digital root certificate from a certificate authority.
[0005] WO2012085593 discloses a smartcard embedded or inaccessible within a cellular telecommunications device (eUICC), locked to a particular operator, while allowing the operator to be altered legitimately presents a challenge. A method is described using policy control tables, and by maintaining the policy control table, any operator subscription may be downloaded / activated on the smartcard but the device will be prevented from accessing the desired operator because that access would violate the lock rules.
[0006] GB2445778 shows a mobile communication device comprises a memory for storing a unique identifier of the device and a processor for determining the lock status of the device- If the processor determines that the device is unlocked, the device transmits to a server an authorization request to operate in the unlocked mode including the unique identifier of the device. The server compares the unique identifier to unique identifiers of devices stored in a database, each identifier associated with a lock status. The device receives from the server the lock status of the device and controls the operation of the device in dependence upon the determined lock status
[0007] US8744403 provides a method and system for remote control of a smart card. The method comprises that: a smart card management platform receives a request of locking or unlocking a smart card from a subscriber and the smart card management platform performs interactive processing with a terminal side according to the request via a mobile network platform, so as to enable the terminal side to perform the locking or unlocking of the smart card.
[0008] WO2014092385 discloses a method for selecting a specific provisioning profile from among a plurality of provisioning profiles and an apparatus using same. In a terminal to which an eUICC is mounted, the eUICC includes at least one provisioning profile wherein each of the one or more provisioning profile enables a user terminal to communicate with a subscriber management entity supporting at least one network provider. Accordingly, a specific provisioning profile can be selected from among the one or more provisioning profiles, and a network can be connected with a specific mobile communication provider using the selected provisioning profile.
[0009] US7873382 describes a mobile communication apparatus that includes a remote lock and control function. After theft or loss of the apparatus, it is possible to remotely lock the apparatus by sending a lock command, e.g. an SMS message. The apparatus may also be controlled to upload information enabling the user to retrieve valuable information stored in the apparatus. The apparatus includes a control unit and registers for controlling the operations of the apparatus, including receiving messages. The apparatus further includes locking means capable of detecting codes in messages received and, responsive to detecting a lock code, sending a lock command to the control unit to render the mobile communication apparatus at least partially inoperable.
[0010] The document "TCG MPWG Mobile Reference Architecture. Specification version 1.0 Revision 1" is an industry specification proposal which aims at defining a Trusted Platform Module (TPM) and its use in a PC client, associated with the "Trusted Computing Group, TCG Mobile Trusted Module Specification, Version 1.0 Revision 1, June 2007" specification that defines the necessary interface for implementing so called Mobile Trusted Modules. This document discusses operating state machines in general terms, including continuation of a transitive trust boot process dependent on a state machine.
[0011] WO2013095594 discloses a device reaction to a stated theft. Location detection is used and setting a low power, or power off, for any interface if the device is in an alert state. The settings can be changed locally or remotely, but only when the device is in unharmed mode.

[0012] The prior art has thus offered different solutions for protecting mobile terminals, configured to operate in a mobile communications network. However, many devices that are not communication terminals as such may indeed also be susceptible to misplacement or theft. The invention targets the general object of being able to control devices of value, which may include minimizing the risk of losing possession or control of such a device.
[0013] According to a first aspect, this is targeted by a module in accordance with claim 1.
[0014] In accordance with a second aspect the object is targeted by a method for controlling usability of a processing unit of a device by means of a module in accordance with claim 10.
[0015] Preferred embodiments are defined by the dependent claims.

[0016] Various embodiments of the invention will be described below with reference to the accompanying drawings, in which

Fig. 1 illustrates a module for controlling usability of a processing unit of a device according to one embodiment;

Fig. 2 schematically illustrates an access circuit and a secure element, formed on a common carrier according to one embodiment;

Fig. 3 schematically illustrate a flow chart for a process for operating the embodiment of Figs 1 and to according to one embodiment; and

Figs 4A and B illustrates the process of controlling usability of a device in an alert state.

1. A module (10) for controlling usability of a processing unit (2) of a device (1), the module comprising:

a modem (11) for communicating with a cellular network (14), and

an eUICC (12), Embedded Universal Integrated Circuit Card, connected to the modem for cellular network authentication and access, the eUICC including a secure element comprising a state machine configured to control the device in accordance with one of a plurality of usability states, including at least a normal state and an alert state, wherein the module (10) is connected to selectively impede access to system clock for the processing unit (2), to inhibit operation of the processing unit in said alert state.

- determining, by means of the state machine, a usability state set for the processing unit (2);

11. The method of claim 10, after the step of starting the module, comprising the steps of:

- establishing a network connection by means of the modem to;

- obtaining an online usability state request from the network;

- setting the usability state in the secure element in accordance with the request. 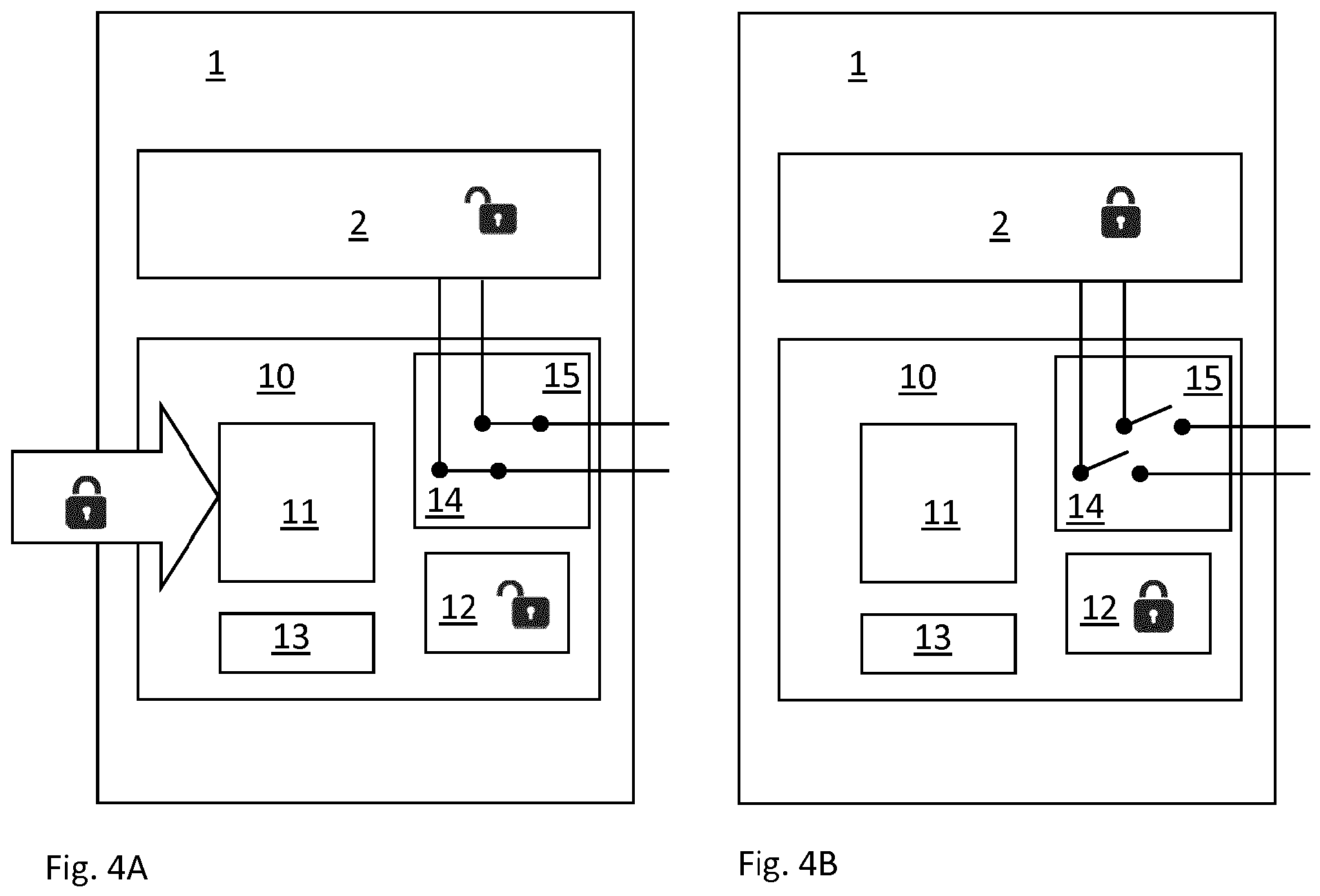