[0001] The present invention generally refers to liquid flow lines, particularly but not exclusively haemodialysis medical lines and more in particular it regards a flow component for lines thus made of the type comprising a body defining a duct having a first and a second end tubular connector coaxial to each other and designed to be connected to the line, and an intermediate tubular connector arranged orthogonally to the duct between said end connectors and containing a valve device.

State of the prior art

[0006] The object of the invention is to overcome the aforementioned technical drawback and enable, in a flow component of the type defined at the beginning, the use - in the relative intermediate tubular connector - of a hollow elastic element similar to the one mentioned in document US-5,533,708.
[0007] According to the invention, this object is attained thanks to a flow component as defined in claim 1.
[0008] Thanks to this solution idea, the flow component according to the invention is thus provided with an intermediate tubular connector efficiently protected by the hollow elastic element that can be cleaned from the external without any risk, in use, of liquid stagnation therein, in that the swirling flow generated in the cavity thereof generates a constant fluid change.
[0009] Due to this configuration, the swirling motion of the liquid diverted towards the intermediate tubular connector and introduced along the cavity of said hollow elastic element, becomes particularly efficient.

[0010] The invention will now be described in detail with reference to the attached drawings, provided purely by way of non-limiting example, wherein:

[0011] The example represented in the drawings refers to the application of the invention to a haemodialysis medical line. However, it should be observed that the invention is equally advantageously applicable to any liquid flow line revealing the same technical drawback.
[0012] With reference to the drawings, and in particular to figures 1-3, the flow component for haemodialysis medical lines according to the invention essentially comprises a body made of moulded plastic material 1 that forms, in a single piece, a duct 2 having a first end tubular connector 3 and a second end tubular connector 4 coaxial to each other and interconnected by means of a small diameter portion 5 of the duct 2, according to a substantially converging-diverging configuration.
[0013] The end connectors 3 and 4 are designed to be connected, in use, to ducts respectively connected to a haemodialysis machine and to a patient subjected to haemodialysis.
[0014] At the small diameter portion 5, the body 1 forms a circular wall 6, represented in larger detail in figures 7 and 8 to be addressed further hereinafter, surrounded by an annular flange 7.
[0015] An intermediate tubular connector 8, typically of the female luer lock type designed to be coupled with a complementary male luer lock connector, is sealingly fixed to such annular flange 7.
[0016] A hollow elastic element 9, typically made of elastomeric material, whose longitudinal axis is indicated with Z in figure 3 is arranged in the intermediate tubular connector 8. The hollow elastic element 9 has a distal end 10 normally arranged substantially flushed with respect to the free end of the intermediate tubular connector 8, and a proximal end 11 that forms a support base on the circular wall 6 of the body 1. The condition shown in the drawings (figures 3-6) corresponds to the non-deformed configuration of the hollow elastic element 9 in which the intermediate tubular connector 8 is sealingly closed in proximity of the distal end 10, which is immediately accessible from outside so as to be cleaned and disinfected. Should the complementary male luer lock connector be used with the intermediate connector 8, the hollow elastic element 9 is partly deformed and compressed ("luer activated") so as to open the communication between the intermediate connector 8 and the duct 2.
[0017] The hollow elastic element 9 delimits, therein, an axially extended cavity 12, closed at the distal end 10 and in which, in use, a portion of blood flow flowing through the duct 2 between the end connectors 3 and 4 thereof can enter and exit through a pair of by-pass apertures 13, 14, addressed below, formed through the flat wall 6.
[0018] The by-pass apertures 13 and 14, represented further in detail in figures 7 and 8, are arranged one upstream and the other downstream of the axis Z with respect to the direction of blood flow into the duct 2 and they are configured so that, in use, the blood flow that traverses the duct 2 and which - as mentioned - partly penetrates into the cavity 12 of the hollow elastic element 9, is diverted in a unique manner and subjected to a swirling motion along such cavity 12. This effect is attained thanks to the fact that the apertures 13 and 14 have a generally juxtaposed semi-circular shape and they are separated from each other by a baffle or diverter fin 15 projecting from the wall 6 towards the internal of the cavity 12. As clearly observable in figure 8, a plane or diametrical axis Y of the two apertures 13, 14 passing through the diverter fin 15 is arranged obliquely with respect to the longitudinal axis X of the duct 2. More precisely, the angle formed between the axis Y and the axis X is comprised between 10° and 50° and it is preferably in the order of about 45°.
[0019] The diverter fin 15 is also arranged obliquely with respect to the axis X of the duct 2 according to an angle comprised between 10° and 50° and preferably of the order of about 45°.
[0020] Thanks to this arrangement, the flow component according to the invention operates as follows.
[0021] Assuming that the blood flow traversing the duct 2 is directed by the end connector 3 towards the end connector 4, i.e. from left to right with reference to figure 3, during its path, part of the blood intercepts the upstream aperture 13, whose semi-circular and obliquely arranged shape widens towards one side with respect to such part of flow. Then, this part of the blood flow begins to be channelled into the smaller area of the aperture, and finds an increasingly wider aperture 13 as the flow advances progressively. Thus, the part of the blood flow is diverted and pushed with a spiral motion towards the internal of the cavity 12, in which it meets a depression due to the presence of the aperture 14 downstream. The blood cannot move directly towards the aperture 14, due to the presence of the diverter fin 15, but it is introduced along the cavity 12 with a generally helical swirling movement, before returning into the duct 2 through the aperture 14. Thus, the combination between the shape and orientation of the openings 13, 14 as well as the presence of the diverter fin 15 enables obtaining a spiral-like swirling flow that keeps the blood penetrated into the cavity 12 in motion, thus preventing stagnation and the ensuing deterioration thereof.
[0022] Obviously, the construction details and the embodiments may widely vary with respect to what has been described and illustrated, without departing from the scope of protection of the present invention as defined in the claims that follow.

2. Flow component according to claim 2, characterised in that said apertures (13, 14) have a substantially juxtaposed semi-circular shape and are oriented obliquely with respect to the axis (X) of the duct (2).

3. Flow component according to claim 2, characterised in that an axis (Y) containing radiuses of said two apertures (13, 14) passing through said intermediate baffle (15) forms an angle comprised between 10° and 50° and preferably of about 45° with respect to the axis (X) of the duct (2).

4. Flow component according to claim 3, characterised in that said baffle (15) forms an angle comprised between 10° and 50° and preferably of about 45° with respect to the axis (X) of the duct (2). 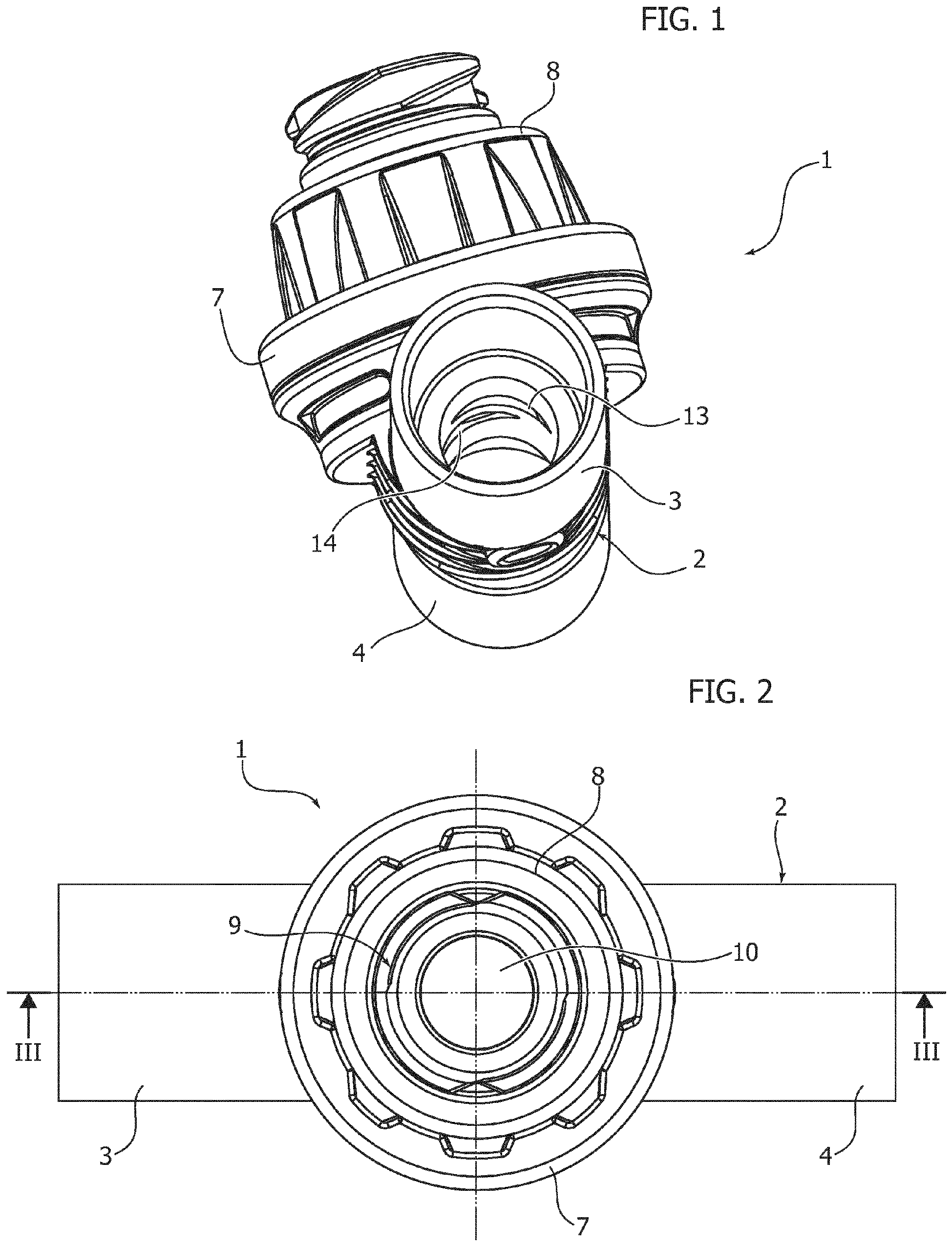 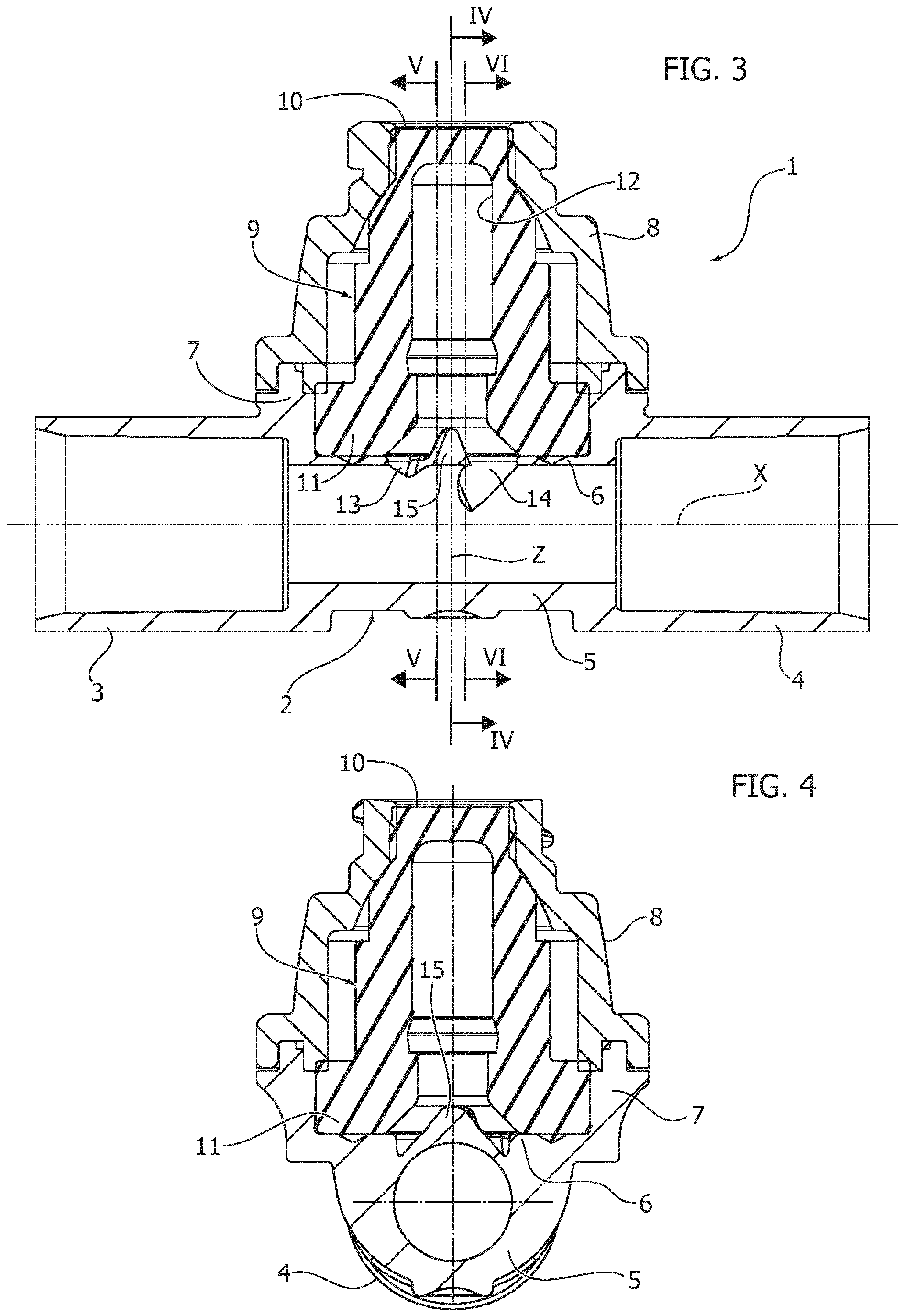 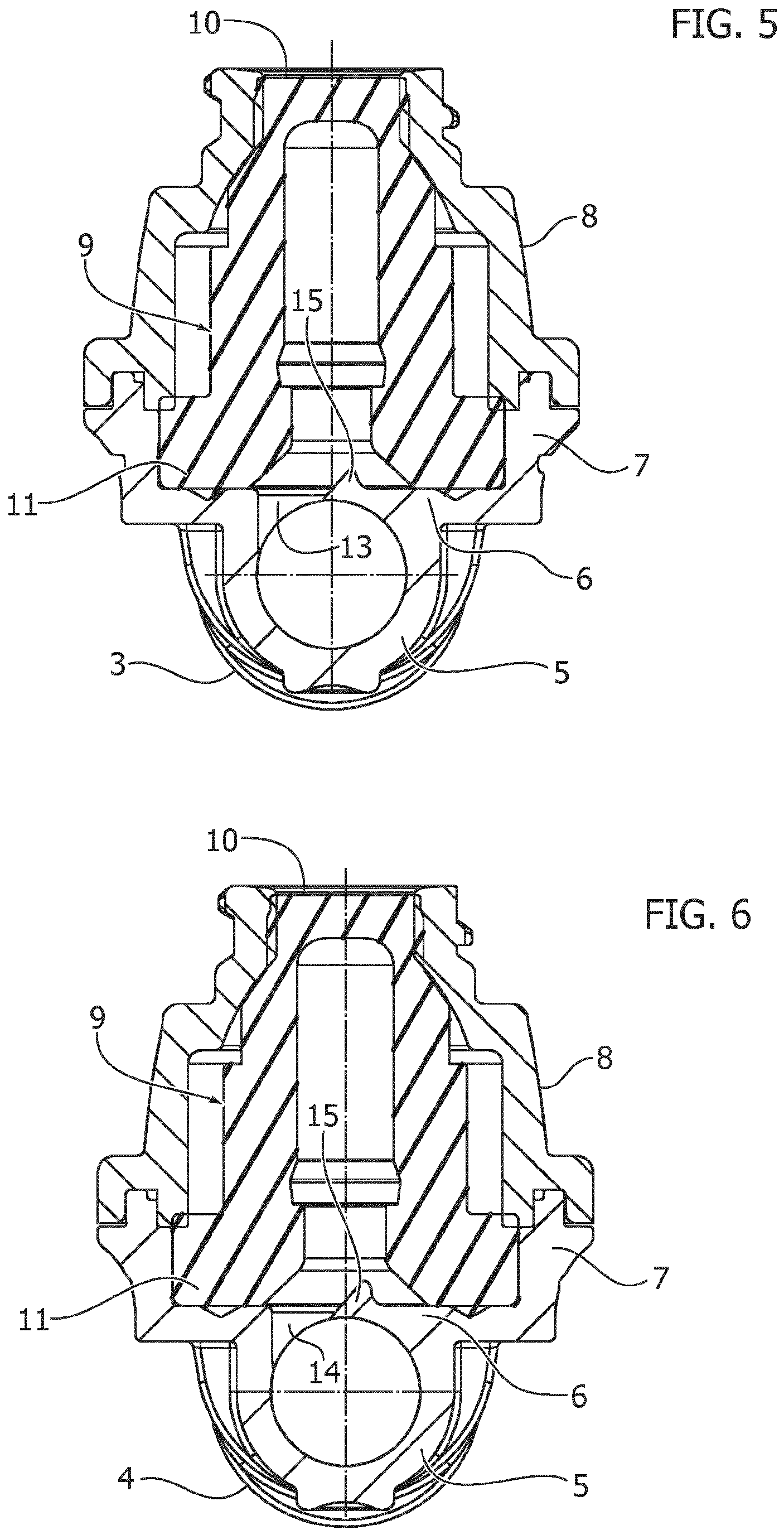 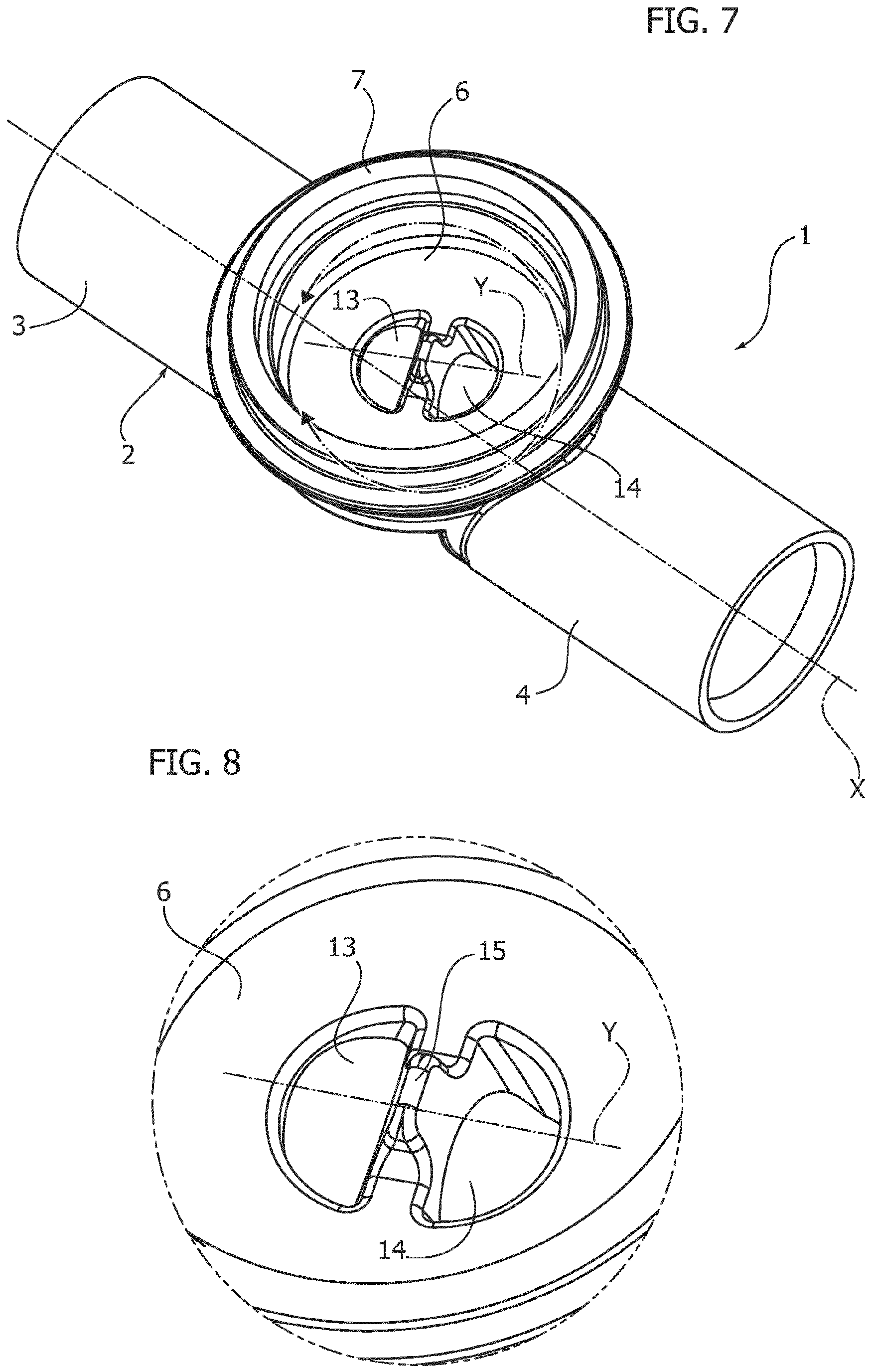