FIELD OF THE DISCLOSURE:

[0002] Diabetes is a disease characterized by failure of insulin feedback and secretion in the beta cells of the pancreatic islets of Langerhans and is one of the most common endocrine diseases across all age groups and populations. The most obvious metabolic effect in diabetes is chronic, erratic elevation of the blood glucose level which is associated with progressive damage to blood vessels. This may lead to heart attack, stroke, blindness, peripheral nerve dysfunction, and kidney failure. Presently there are 18.2 million people in the United States alone who have diabetes. In addition to the clinical morbidity and mortality, the economic cost of diabetes is huge, exceeding $90 billion per year in the United States alone, and the prevalence of diabetes is expected to increase.
[0003] There are two major forms of diabetes mellitus: insulin-dependent (Type I) diabetes mellitus which accounts for 5 to 10% of all cases, and non-insulin- dependent (Type-II) diabetes mellitus which comprises roughly 90 to 95% of cases.
[0004] Type I diabetes mellitus is an autoimmune disease characterized by progressive destruction of pancreatic beta-cells and most often occurring in children and young adults. The disease is associated with high rate of severe irreversible complications which occur despite the availability of insulin replacement, usually through injections administered 1-4 times daily.
[0005] Most therapeutic strategies for treatment or prevention of type I diabetes mellitus are directed to suppression of the autoimmune response in order to prevent beta-cell destruction. Accordingly, various immunosuppressive agents have been considered for preventing destruction of pancreatic beta-cells have been attempted, such as glucocorticoids, cyclophosphamide, cyclosporin A, rapamycin, FK506 and prodigiosin. However, the use of such immunosuppressive agents may cause severe side effects such as drug-related toxicity to liver or kidney and to increase incidence of infectious complications, particularly in patients with diabetes mellitus that are already susceptible to infections as part of their disease.
[0006] Type-II diabetes results from a loss of insulin production combined with body's inability to properly use insulin (insulin resistance), and is oftentimes associated with obesity and aging. In Type II diabetes, patients typically begin therapy by following a regimen of an optimal diet, weight reduction and exercise. Drug therapy is initiated when these measures no longer provide adequate metabolic control. Initial drug therapy includes: sulfonylureas (for example, tolbutamide, chlorpropamide and glibenclamide), biguanides (for example, metformin and buformin) and a- glucosidase inhibitors (for example, acarbose and voglibose). However, over 50% of all diabetics treated by presently available drugs demonstrate poor glycemic control within six years, and require insulin replacement therapy as the last resort.
[0007] Although many of the symptoms of diabetes mellitus may be controlled by insulin therapy, the long-term complications of both type I and type II diabetes mellitus are severe and may reduce life expectancy by as much as one third. Over time, elevated blood glucose levels damage blood vessels, the heart, eyes, kidneys, nerves, autonomic nervous system, skin, connective tissue, and white blood cell function.
[0008] Moreover, insulin therapy may result in insulin allergy, insulin resistance, atrophy of the subcutaneous fat at the site of insulin injection (i. e., lipoatrophy), enlargement of subcutaneous fat deposit (i. e., lipohypertrophy) due to lipogenic action of high local concentration of insulin, and insulin edema.
[0009] There is thus a widely recognized need for, and it would be highly advantageous to have new, safe and effective therapies for diabetes mellitus. 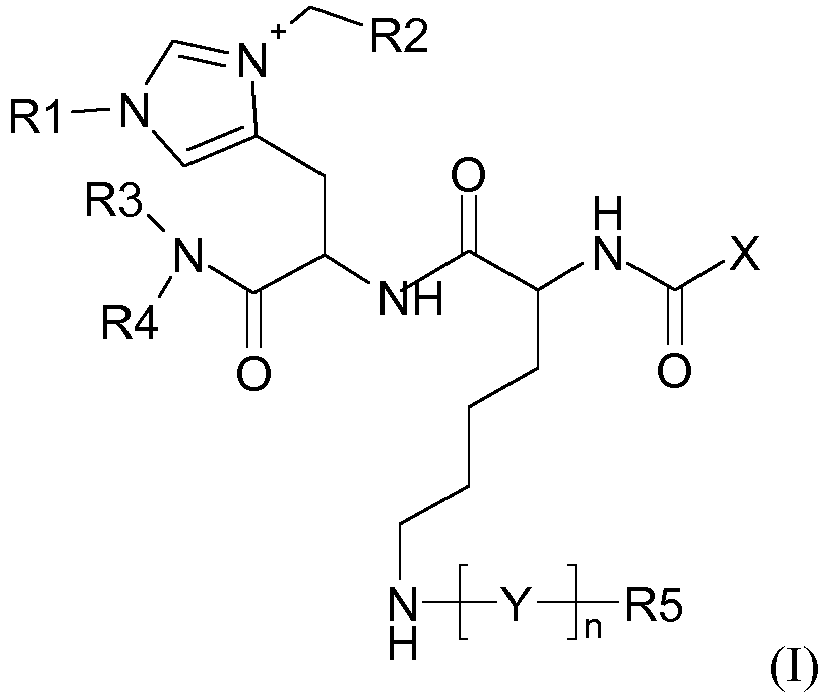 R2 is a hydrogen atom or an aryl group

A is a group selected from the group consisting of:

with n" representing an integer from 1 to 20

with m, m' and m" representing independently from the other an integer from 1 to 15

X represents a group chosen in the following list:

Example 1: Effect of Apelin on insulin sensitivity: proof of concept in healthy volunteers

[0129] It will be described below the clinical protocol conceived for assessing the therapeutic effectiveness of a pharmaceutical composition disclosed in the present specification.

[0158] We assessed the influence of intravenous (pyr1)-Apelin-13 administrations on insulin sensitivity using the hyperinsulinemic euglycemic clamp technique developed by DeFronzo et al., 1979.
[0159] Two groups of 8 male, overweighed (BMI 25-30 kg/m2) healthy volunteers were included in this study. A single 2 hours continuous intravenous (pyr1)-Apelin-13 infusion was administered to each volunteer.
[0160] The first 8 volunteers were included in the low dose group. They were perfused with a 9 nmol/kg (pyr1)-Apelin-13 dose.
[0161] The study monitoring committee then reviewed the risks with regard to safety data observed in the first 8 volunteers and any published information likely to cause a change in the estimate of the risks. The inclusion of the next 8 volunteers was allowed after written authorization of the study monitoring committee.
[0162] The next 8 volunteers were included in the high dose group. They were perfused with a 30 nmol/kg (pyr1)-Apelin-13 dose.
[0163] Each volunteer underwent two clamps spaced by 7 to 21 days: a reference clamp during which a placebo solution (perfusion solution) was perfused and an "Apelin" clamp during which a (pyr1)-Apelin-13 infusion was perfused. The sequence of administration of the tested products (placebo or apelin) was randomly determined and double blinded.
[0164] The clinical study included four visits: V1: inclusion visit V2: first clamp V3: second clamp V4 end of study visit.

DeltaI = difference between fasting insulin and the average of the four plasma insulin values measured at each steady-state (assay tube serum bank collected every 10 min during the basal steady-state phases: 90-120 min and product steady-state: 210-240 min)

[0170] To assess the primary endpoint, statistical analysis of this cross over study was based on a linear mixed model. In this exploratory study, few data was available to quantify the primary endpoint variation in humans. We hypothesized approximately a 20% increase of the glucose infusion rate at the Apelin dose causing the maximum effect on carbohydrate metabolism, namely an effect of the same order of magnitude as that observed in rodents.
[0171] According to data published by Muniyappa et al. showing that the coefficient of variation of the glucose infusion rate during an euglycemic hyperinsulinemic clamp was 0.1, and using the PASS software, for a power of 86% in a cross-over trial with an expected 20% increase of the glucose infusion rate, 8 subjects were required for each dose tested. A total of 16 subjects were therefore included in this study. This calculation was based on the following statistical references:
[0172] Based on previous studies assessing the effect of different molecules, this sample size of 8 volunteers for each selected dose seemed appropriate to highlight a significant difference on the primary endpoint.
[0173] Volunteers who early discontinue the study were replaced.

[0174] A "per protocol" statistical analysis was performed. The description was done by group (Apelin or placebo), and group x period. Analysis of the effects "group", "period" and "interaction group x period " was based on a linear mixed model that allowed to adequately analyze the crossover design and simultaneously estimate the three aforementioned effects.
[0175] The results were interpreted separately for each (pyr1)-Apelin-13 dose.
[0176] The primary endpoint was analyzed according to the strategy described in the paragraph above.
[0177] The quantitative secondary endpoints were analyzed according to the same strategy as the primary endpoint.
[0178] The safety and security endpoints (clinical signs of intolerance, allergy and toxicity) were described for each group (placebo/apelin) and for each (pyr1)-Apelin-13 dose. The severity of these events was systematically reported.

[0181] These results demonstrate the insulin-sensitizing effect of (Pyr1)-Apelin-13 in healthy humans and open new perspectives for the research and development of therapeutic alternatives targeting insulin resistance in type 2 diabetic subjects.