[0003] Power plants, gas turbine engines and other heat engines using the Brayton cycle can benefit from heat exchangers. In SCO2 Brayton Cycle exhaust gases are reused at the intake, and thus, form a closed or semi-closed system. A recuperator may be used as a heat exchanger in such systems and may operate as a counterflow energy recovery device. The recuperator is usually positioned within the supply and exhaust air streams to recover waste heat and increase the overall efficiency of the SCO2 Brayton cycle. The gases are pre-heated using the recuperator to transfer waste heat from the exhaust and to the compressed air. which is preheated so less fuel is required for heating the gases to a turbine operating temperature. In a closed or semi-closed Bray ton cycle recuperator, the working fluid such as CO2 is recirculated. The air expelled from the turbine is reintroduced to the compressor. The heat exchanger as a recuperator pre-heat the working fluid before it is introduced to combustion chamber.
[0004] Some systems may include a high temperature recuperator and a low temperature recuperator.
[0005] The publication "Overview of Supercritical CO2 Power Cycle Development Summary at Sandia National Laboratories" of Steven A. Wright et al., presented at the International Seminar on Organic Rankine Cycle Power System, held in Delft, 21st to 23rd, September, 2011, discloses a power generation system comprising a turbine and recuperators, said system being however not directed to overcoming the drawbacks associated with high pressure power generation system, such as a supercritical CO2 turbine.
[0006] WO 2014/152239 A2 concerns a counter-flow heat exchanger, constructed with plenums at either end that separate the opposing fluids, the channels of which are arrayed in a checkerboard patterns such that any given channel is surrounded by channels of opposing streams on four sides, laterally on both sides and vertically above and below.
[0007] US 2005/217837 concerns a geometric arrangement of components in a compact counter-flow heat exchanger that allows for either an increase in effectiveness at a set mass, or a reduction in heat exchanger mass at a set effectiveness, or a combination of the two. The geometric arrangement can be achieved by either tube bending at the level of piece part manufacture and subsequent care during the tube stacking process, or by elastic deformation of the tube stack at the time of bonding.
[0008] DD 243 091 A1 concerns another type of heat exchanger design with a particular cross flow; injection moulded plastic pieces are used as recuperator. However, the latter cannot be used for a supercritical CO2 power generation system with high pressure.
[0009] WO 94/10520 A1 discloses a heat exchanger which comprises ducts of the first type and ducts of the second type, wherein ducts of both types are at least partly mutually adjacent, wherein the ducts extend mutually parallel, the ducts are arranged in cross section mutually connecting in accordance with a regular pattern so that substantially each of the separating walls is bounded on at least one side by a duct of the first type and is bounded on the other side by a duct of the second type.
[0010] Some power generation systems use supercritical carbon dioxide (S-CO2) as the working fluid. It is desirable in some of those systems, for example, using the current heat exchangers in some conventional power plants, to scale the systems without disrupting the long- term operation of the system. Many heat exchangers as recuperators are not easily scalable and are used in moderate temperature and pressure ranges, and therefore, are not robust. To scale up a current heat exchanger in some power plants would disrupt the entire system.

[0016] Other objects, features and advantages of the present invention will become apparent from the detailed description of the invention, which follows when considered in light of the accompanying drawings in which:

FIG. 2 is a fragmentary and schematic drawing view of steam, helium and supercritical CO2 turbomachinery and showing their relative size.

FIG. 3A is a simplified block diagram of a Simple Recuperated Cycle (RC) closed cycle power generation turbine system using the Brayton cycle in accordance with a non-limiting example.

FIG. 3B is a graph showing the Simple Recuperated Cycle with temperature on the vertical axis and entropy on the horizontal axis.

FIG. 4B is a graph of the Recuperated Recompression Configuration system with temperature in Kelvin on the vertical axis and the entropy in kJ/kg-K on the horizontal axis.

FIG. 5A is a fragmentary drawing view of a recuperator that operates as a heat exchanger in a power generation turbine system in accordance with a non-limiting example.

FIG. 5B is a fragmentary plan view of the recuperator section shown by the diamond in FIG. 5A in accordance with a non-limiting example.

FIG. 6 is a partial sectional view of the recuperator in accordance with a non-limiting example.

FIG. 7 is a fragmentary, isometric view of the recuperator channel walls in accordance with a non-limiting example and showing a rectangular configuration of fluid channels formed by the matrix panels that are diffusion bonded together.

FIG. 8A is a fragmentary plan view of a matrix panel of the recuperator in accordance with a non-limiting example.

FIG. 8B is a sectional view of the matrix panel taken generally along line 8B-8B in FIG. 8A.

FIG. 9 is a table showing fiber properties used in PDC composites for the matrix panel of the recuperator in accordance with a non-limiting example.

FIG. 10 is a table showing matrix properties used in the PDC composites for the matrix panel used in the recuperator in accordance with a non-limiting example.

FIG. 11A is an isometric view of an example recuperator in accordance with a non-limiting example.

FIG. 11B is an isometric view of the example recuperator with a section cut along line 11B-11B in FIG. 11A.

wherein said high and low temperature recuperators each comprise a plurality of matrix panels (106) each formed of fiber reinforced ceramic and polymer derived ceramics composite interconnected together and defining hot fluid microchannels and cold fluid microchannels arranged adjacent to each other in a counterflow and stair-step configuration; and further comprising a diffusion bond between adjacent matrix panels that secures respective adjacent matrix panels together, wherein each recuperator defines a longitudinal axis and an inlet and outlet end along the longitudinal axis, and said matrix panels extend in a direction diagonal to said longitudinal axis and straighten at the inlet and outlet end.

2. The power generation system according to Claim 1 wherein said matrix panels are interconnected together to define the hot and cold fluid microchannels in each of said high and low temperature recuperators as geometrically shaped in either a rectangular, elliptical, oval or rhombus configuration.

3. The power generation system according to Claim 1 wherein said each of said respective hot or cold fluid microchannels is surrounded by fluid channels carrying the respective other cold or hot fluid.

4. The power generation system according to Claim 3 wherein each of the respective hot or cold fluid microchannels is surrounded by four channels on four sides carrying the other respective cold or hot fluid.

5. The power generation system according to Claim 1 wherein each matrix panel comprises polysiloxane or polycarbosilane.

6. The power generation system according to Claim 1 wherein the matrix panels have a wall configuration that includes one of at least ribs, dimples and a roughed surface to create turbulence. 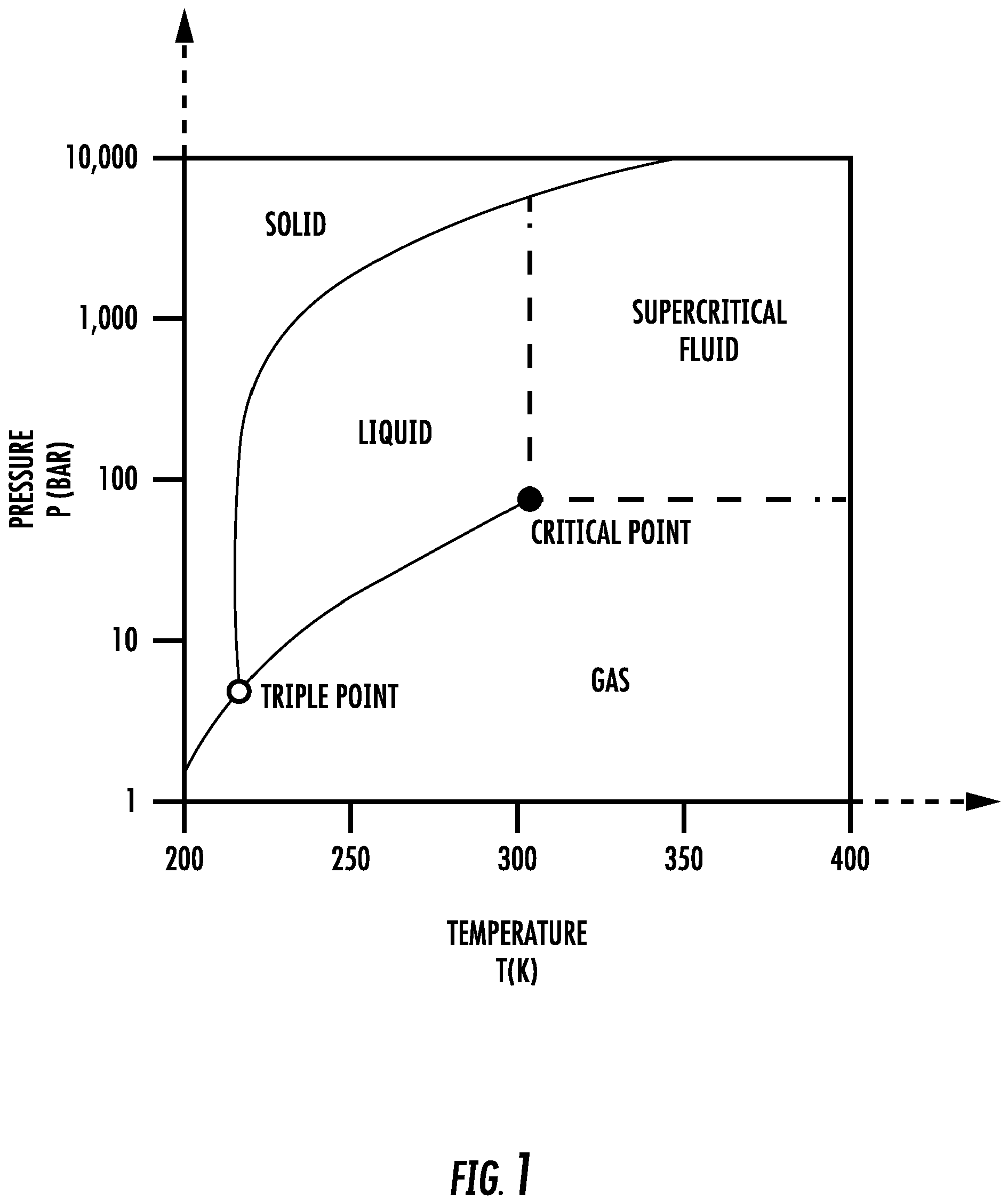 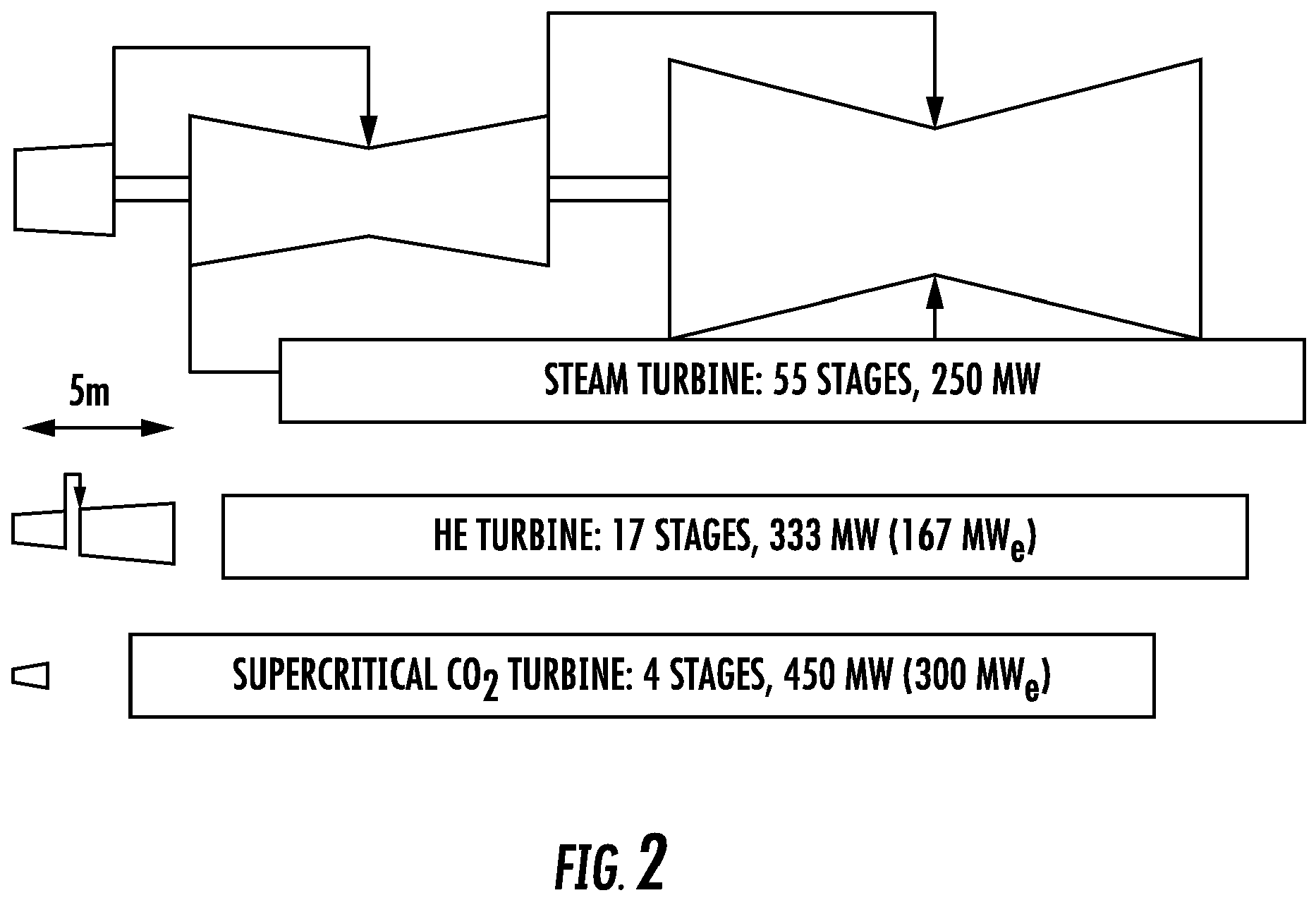 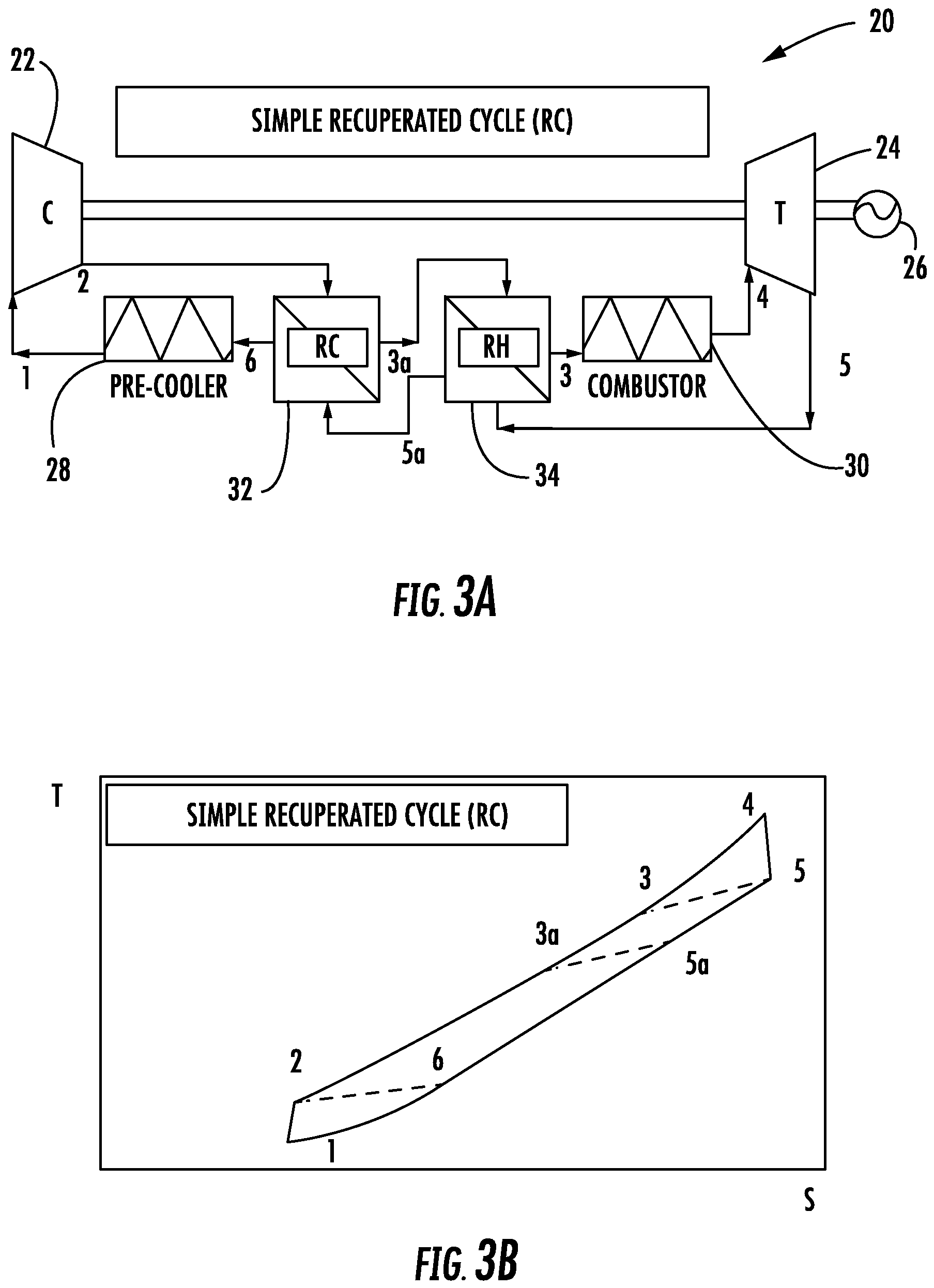 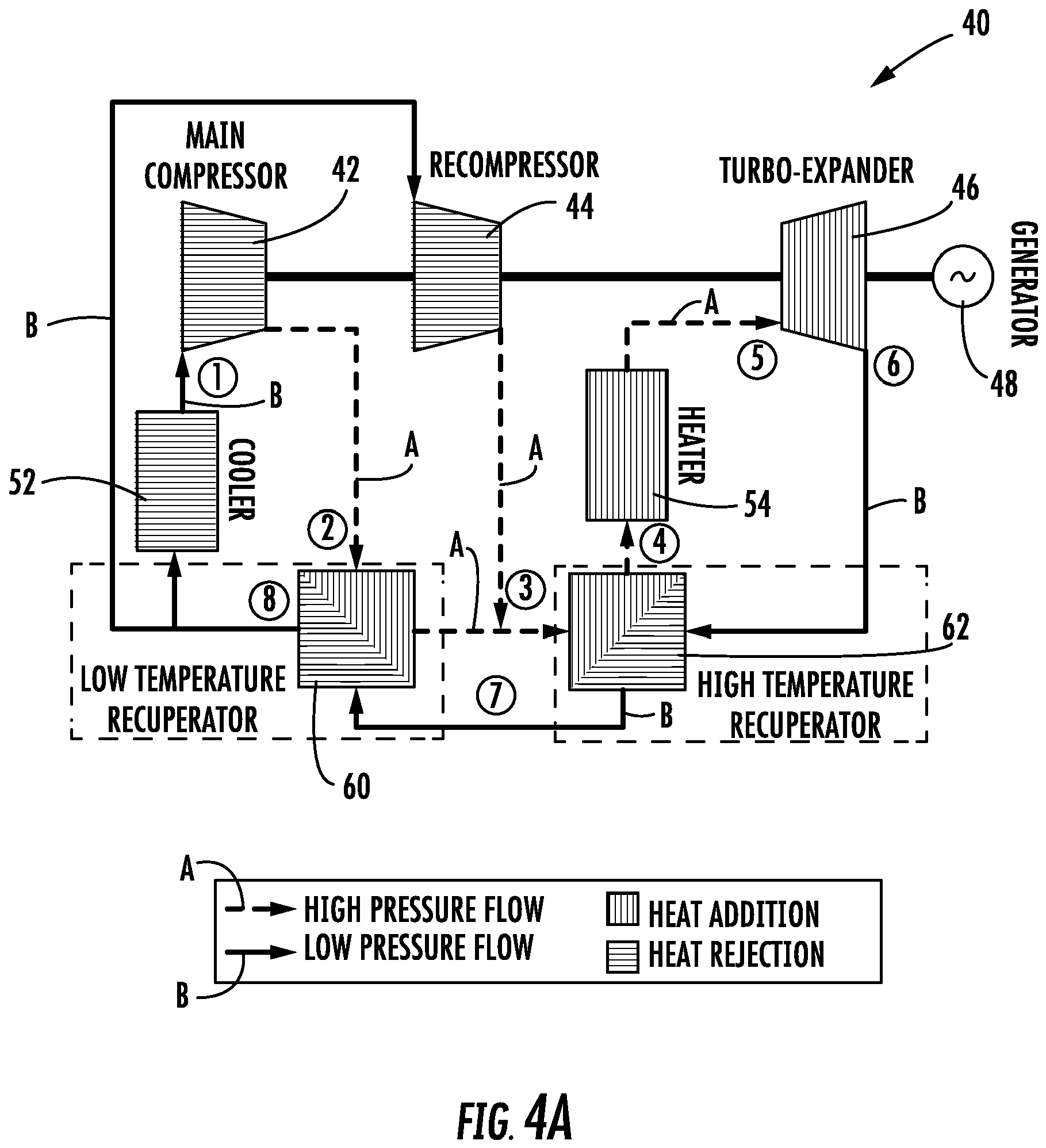 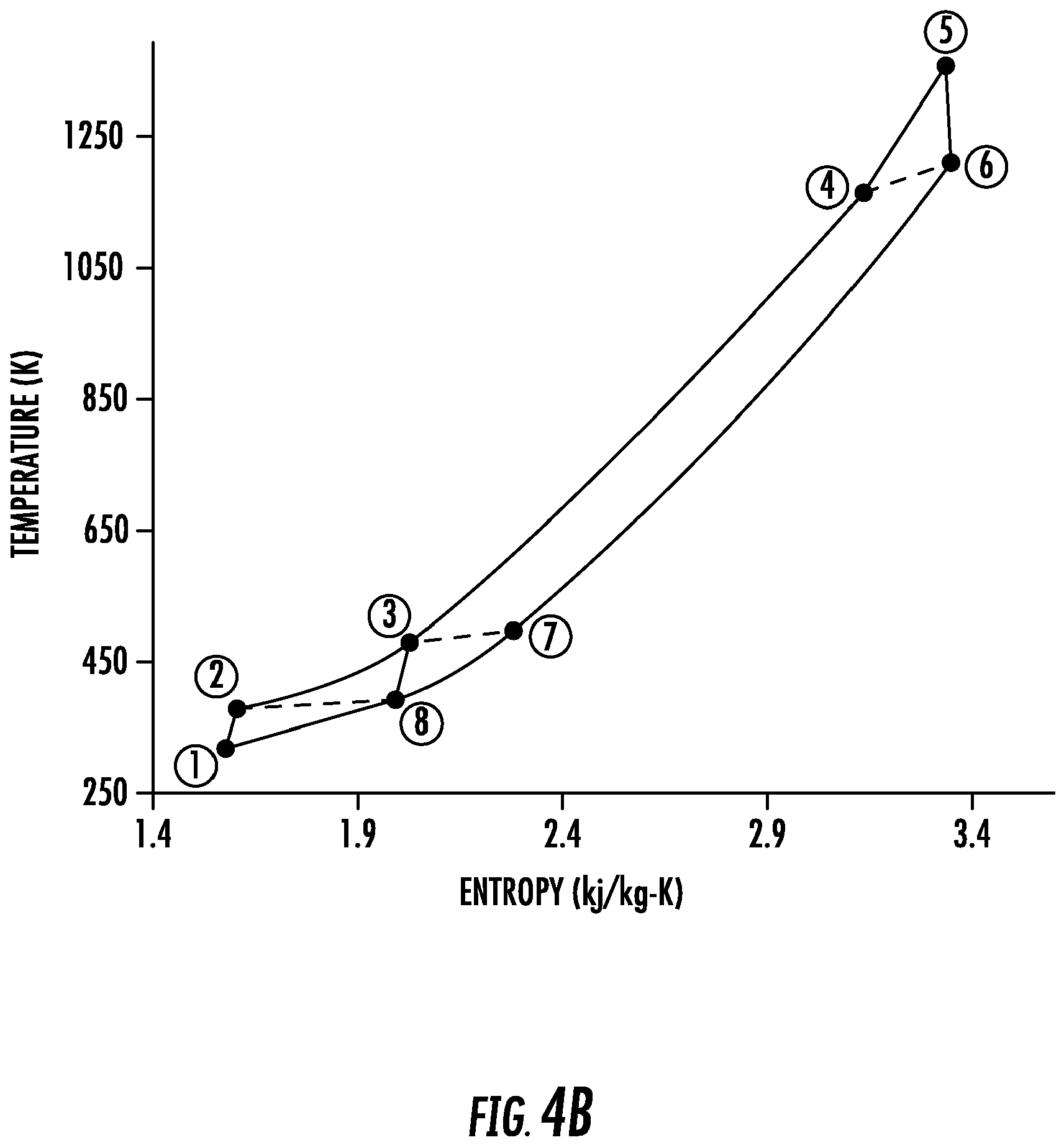 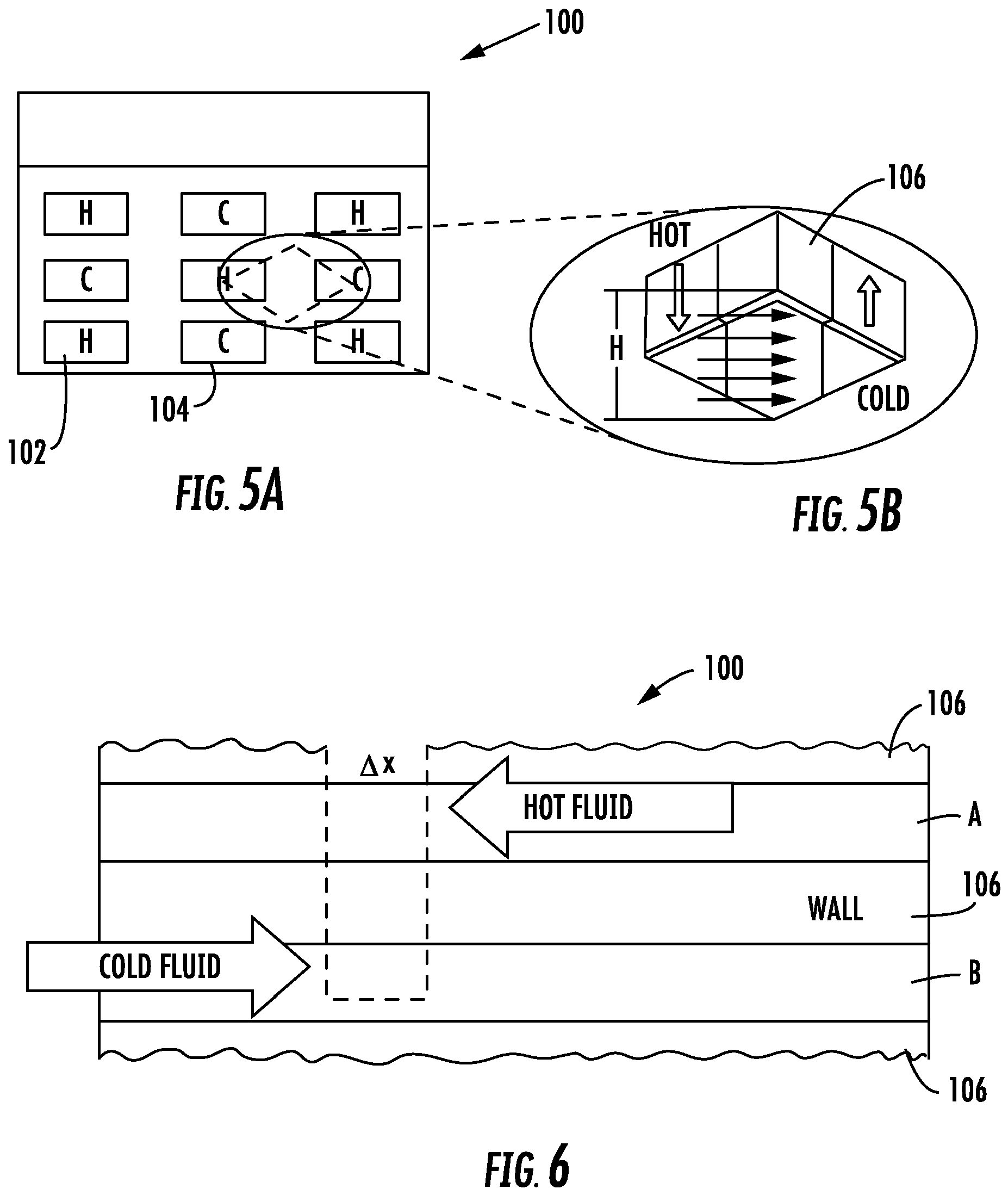 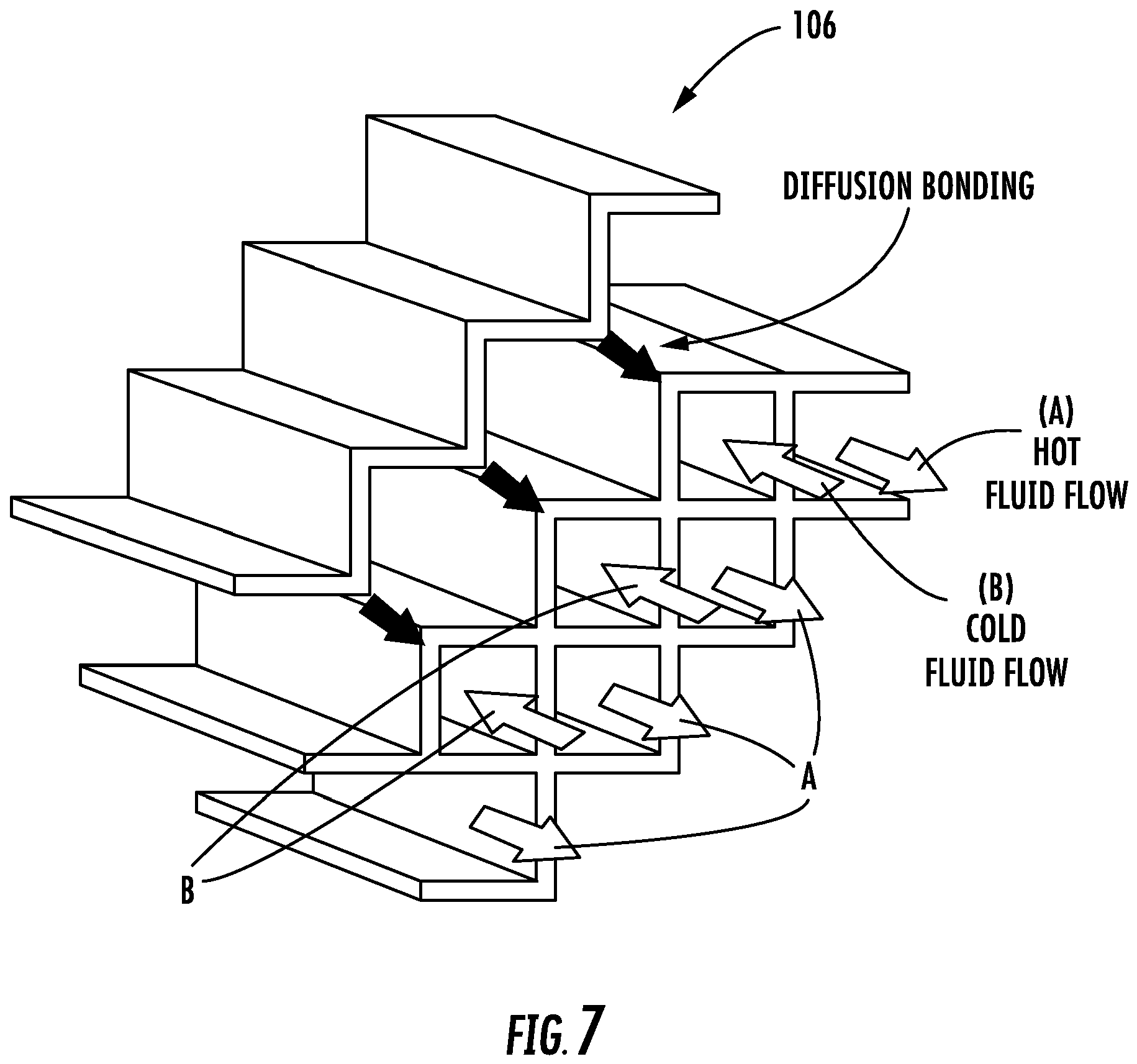 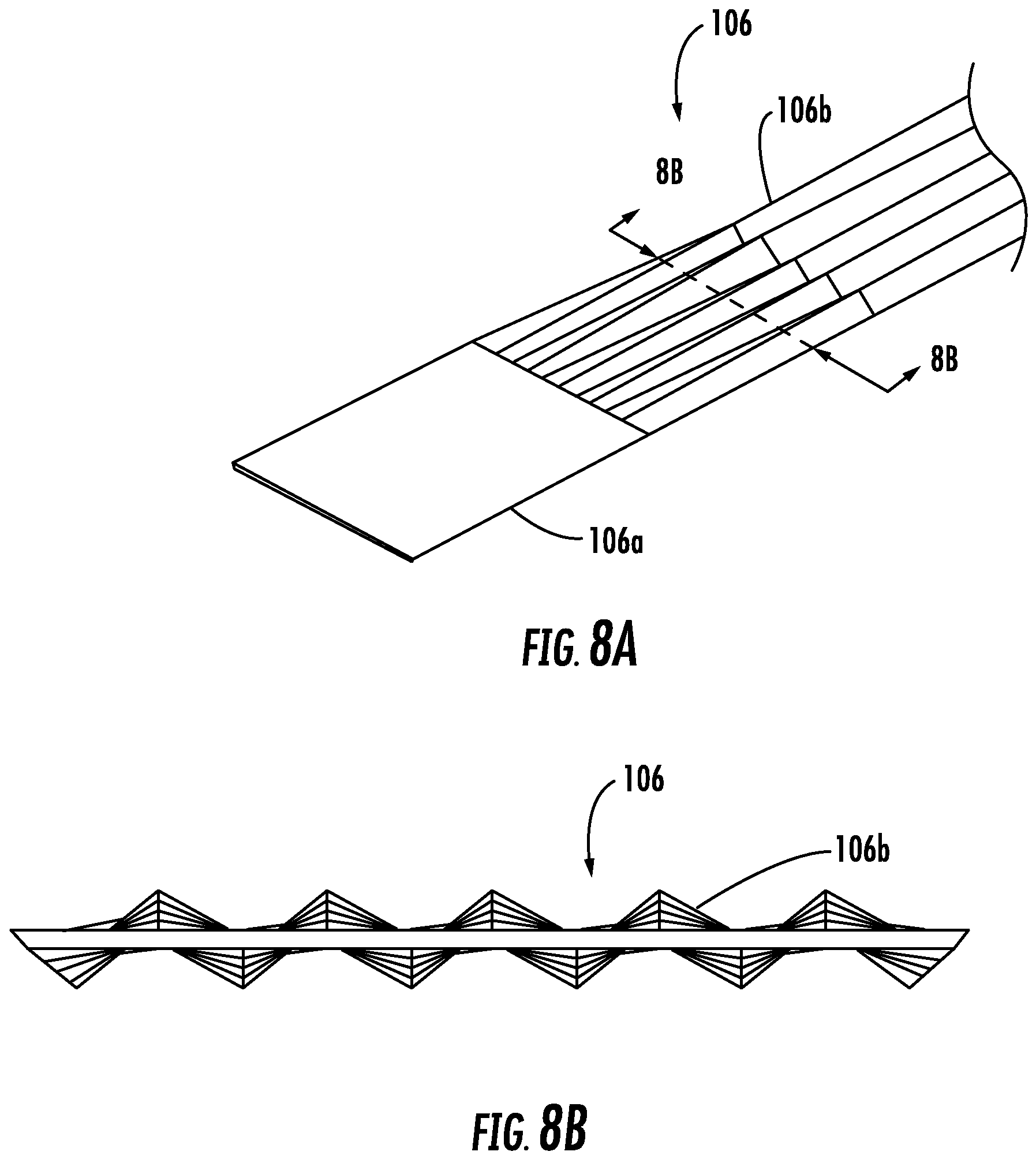 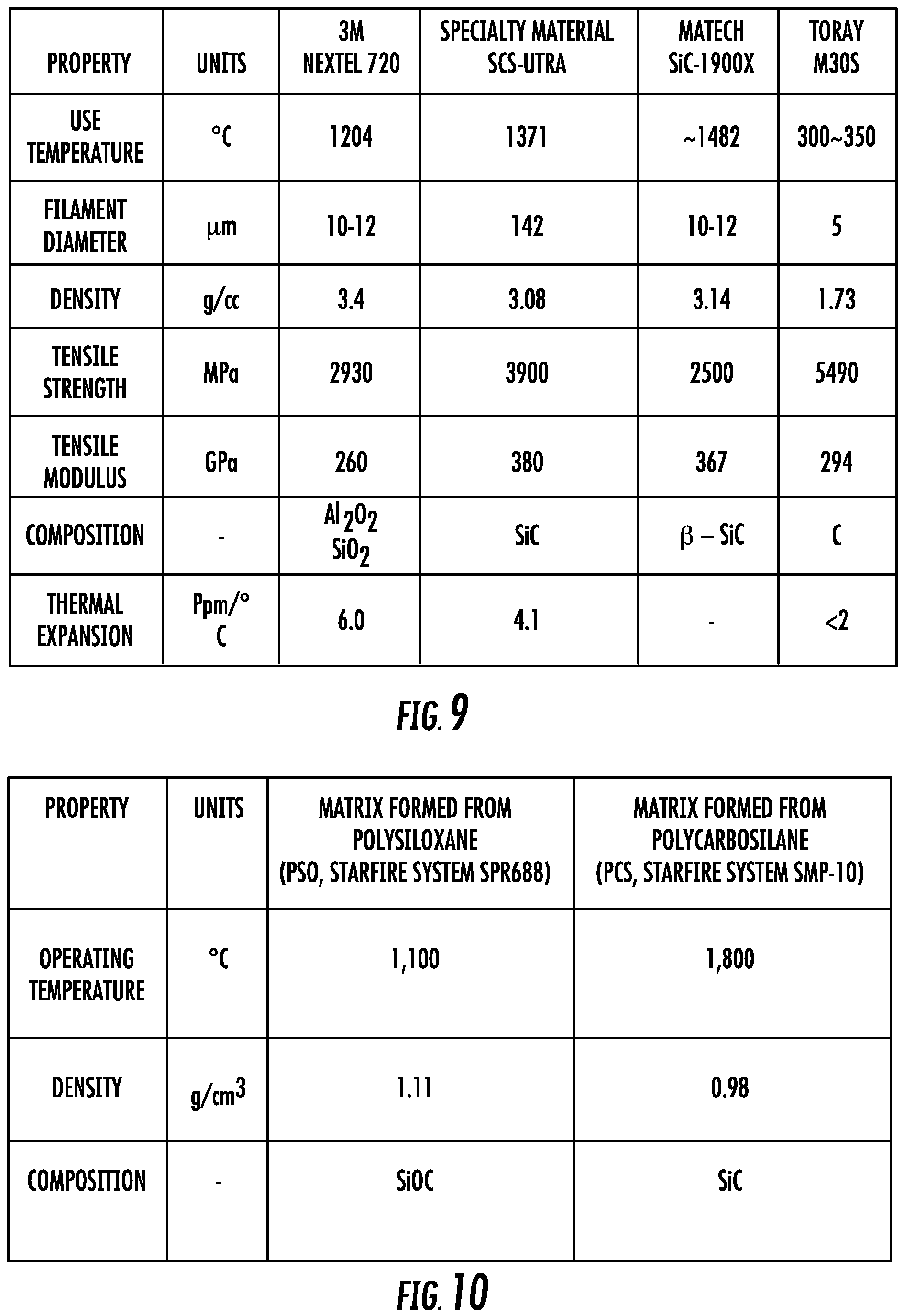 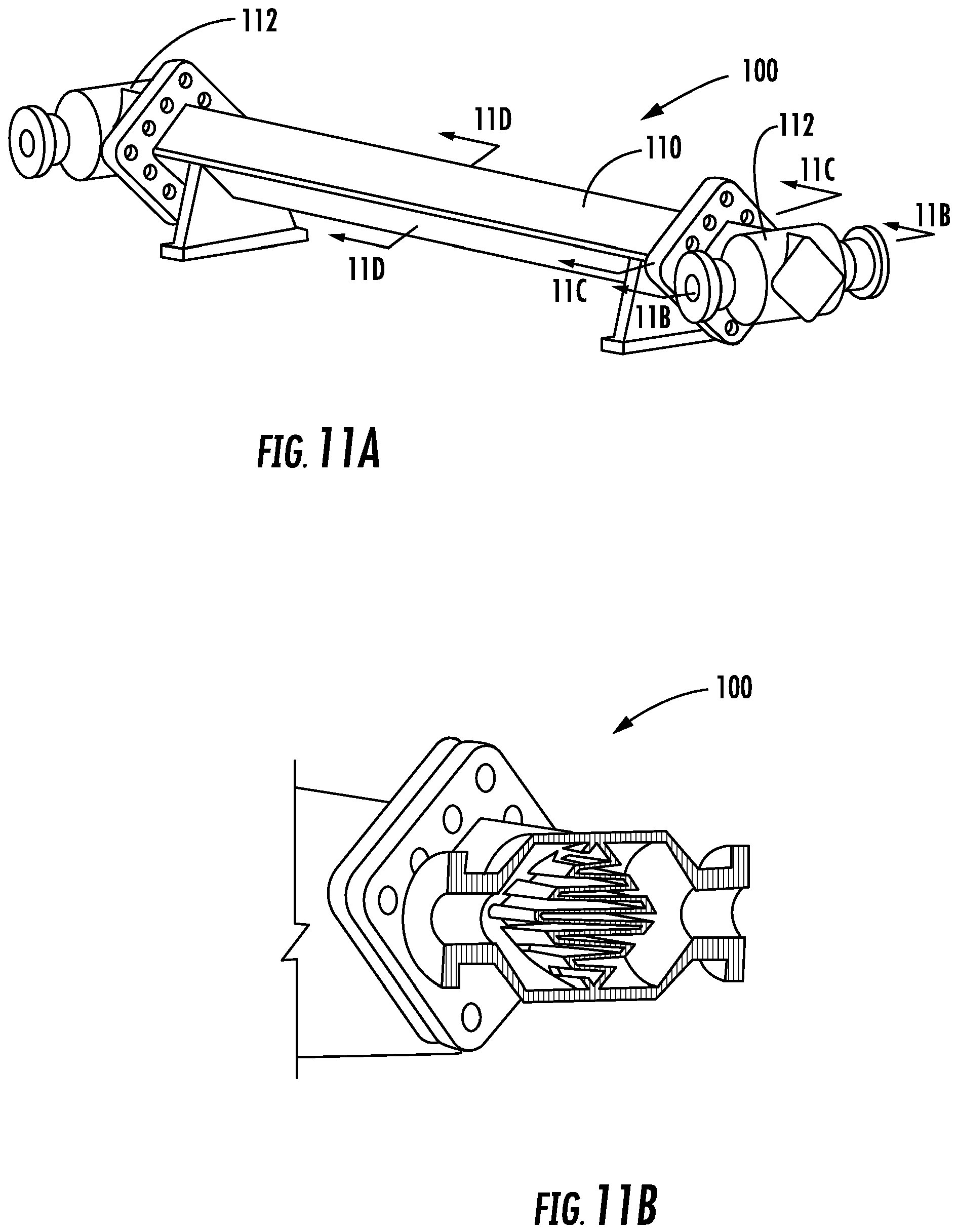 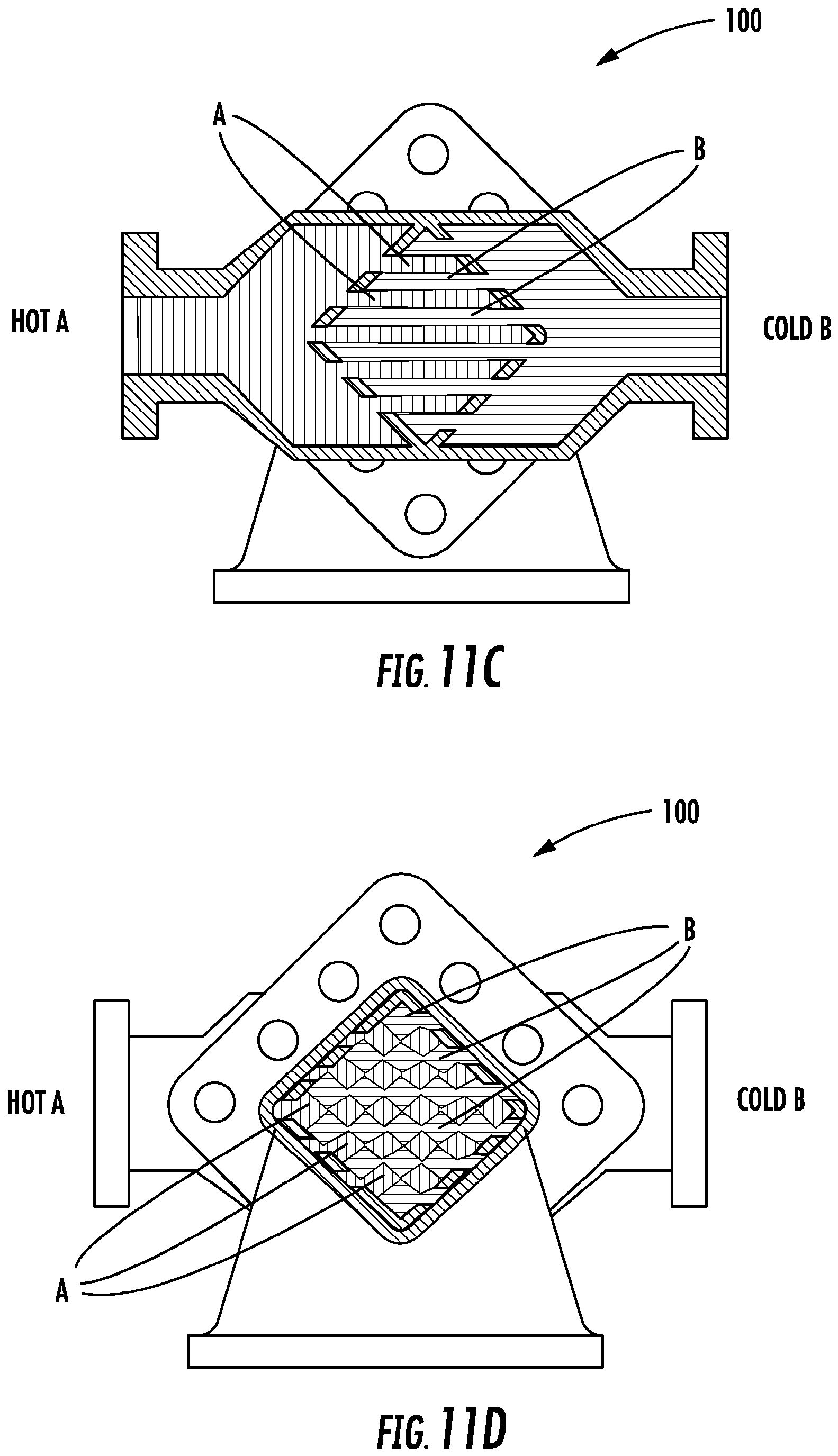