[0001] This invention relates to a device for delivering medication to the nasal cavity of a human patient.

[0024] Some preferred embodiments of the invention will now be described by way of example and with reference to the accompanying drawings, of which:

Figure 1 is an exploded isometric view of a nasal medication delivery device according to an embodiment of the invention;

Figure 2 is a side cross-sectional view of the supply unit;

Figure 3 is a side view of the exterior of the supply unit;

Figure 4 is an expanded side cross-sectional view showing detail of the supply unit;

Figure 5 is an isometric view of the supply unit;

Figure 6 is an opposite isometric view of the supply unit;

Figure 8 is a side cross-sectional view showing detail of the medicine supply unit of an alternative embodiment of the invention showing a tapered medicine energising chamber; and

Figure 9 is a side cross-sectional view of the medicine supply unit of an alternative embodiment of the invention showing an energising chamber which incorporates a well.

[0025] Referring to figure 1, the delivery device is used for the administration of therapeutic agents to the nasal cavity of a human patient. It has a main body 1, a breath receptor 2, and a medicine supply unit 3.

[0026] The main body 1 has an LCD screen 4 to display messages to the user, for example the name of the medicine to be delivered, the time at which the next dose is due to be taken, etc. The main body 1 also has a battery, a USB port 5 for charging the battery or for receiving input generally, an on/off power switch 6, an RFID reader 7 and a breath sensor. All of the electronics for the delivery device are part of the main body 1.
[0027] The RFID reader 7 is able to read electronically stored prescription details kept on a tag on the medicine packaging. Those details are used to automatically set the device to deliver the prescribed amount of medicine.

[0028] The breath receptor 2 is detachable from the main body 1 with a click-fit arrangement, and has a detachable replaceable mouthpiece 8. The mouthpiece 8 can be gripped between the lips of the user and blown into. As the breath moves through the receptor 2 it is acoustically detected by the sensor in the main body 1, and, as a consequence, the device is triggered to deliver medicine to the user. The breath then passes out the back 9 of the device, having served its purpose. The device only releases medicine while the user is blowing/exhaling. This is because the act of exhaling causes the user's pharynx to close, so that medicine is only delivered to the nose, and not the throat or lungs.

[0037] In some embodiments of the invention the device will only run if the user has purchased sufficient electronic 'credits', which are communicated to the device wirelessly or by hardwire.
[0038] Referring to Figures 8 and 9, in some embodiments the energising chamber 13 has a tapered floor or a well provided by the membrane 12, designed to urge medicine 18a to gather centrally in the focal zone so as to prevent or reduce undelivered residues.
[0039] While some preferred forms of the invention have been described by way of example, it should be appreciated that modifications and improvements can occur without departing from the scope of the following claims.

1. A device for delivering nasal medication, having:

- an energising chamber (14) smaller than the feeder chamber, arranged to hold medication at the focal zone (19);

the device formed so that when it is activated:

a. a tapered floor and / or

to urge medication to gather at the focal zone (19).
14. A delivery device for nasal medication according to claim 1, wherein:

- the ultrasonic energy generator acoustically energises a charge of the medication within the focal zone to produce an acoustic radiation pressure on an inner face of the mesh so that the mesh oscillates to cause a micro-pumping action of the medication. 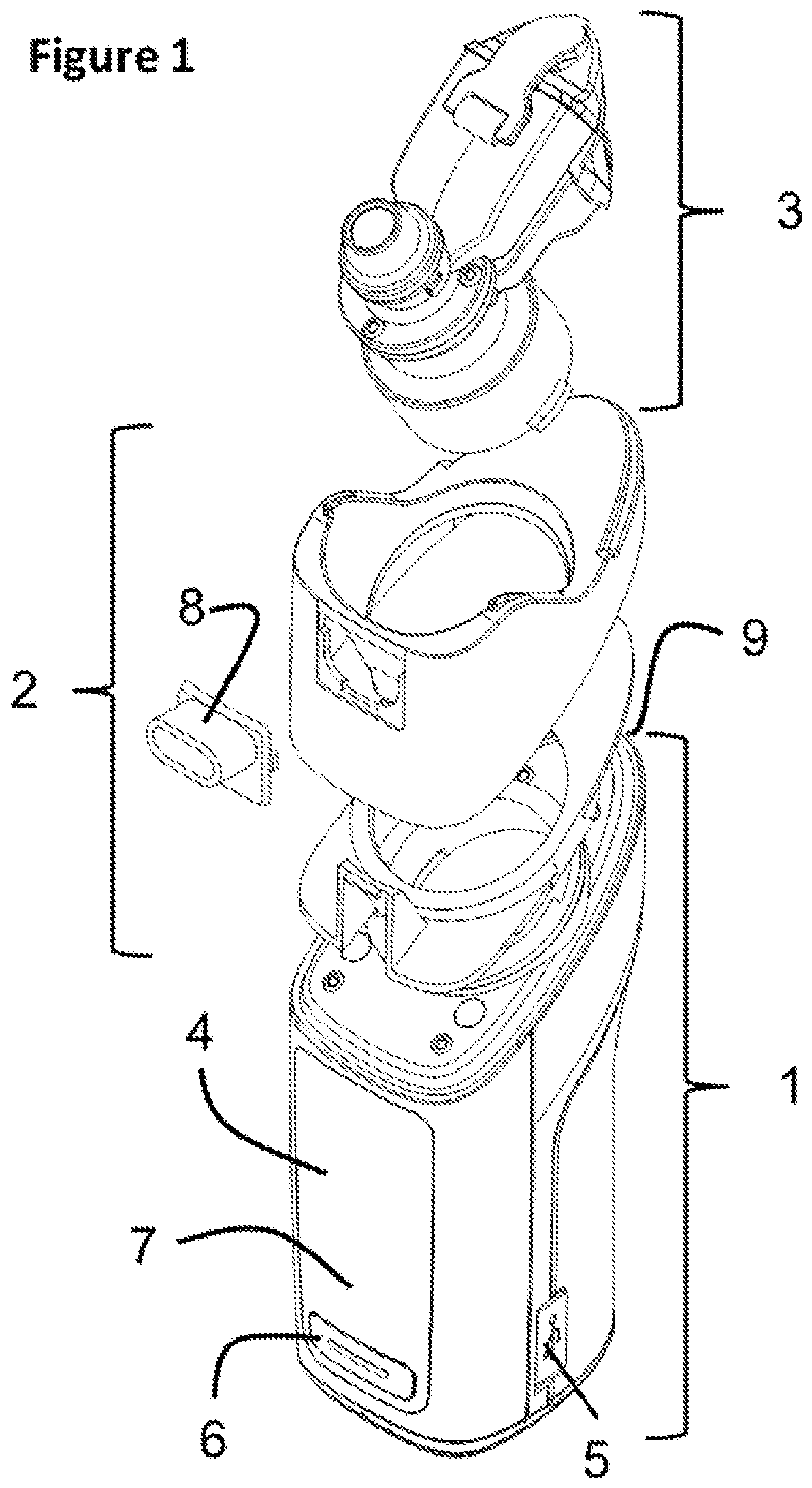 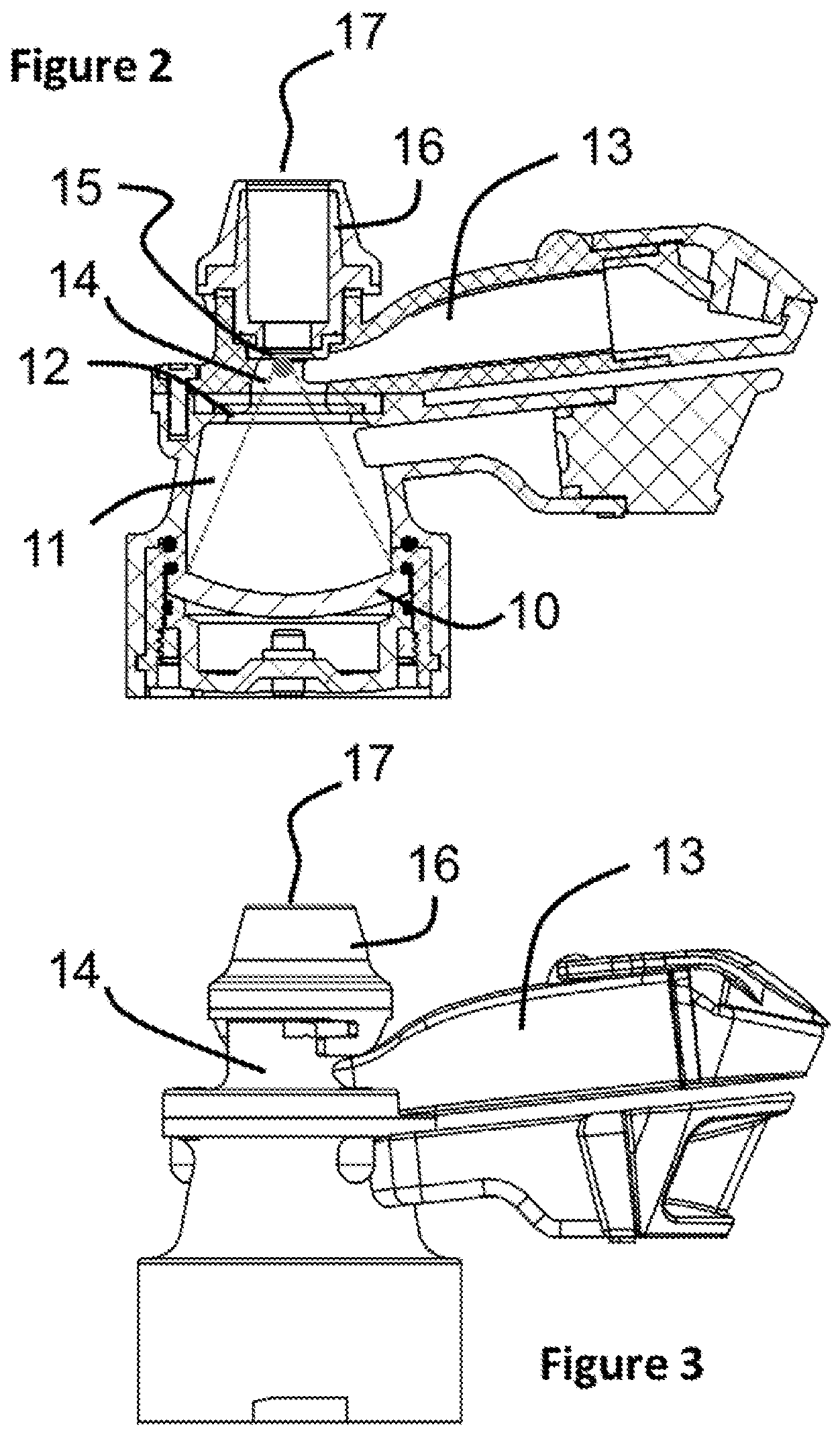 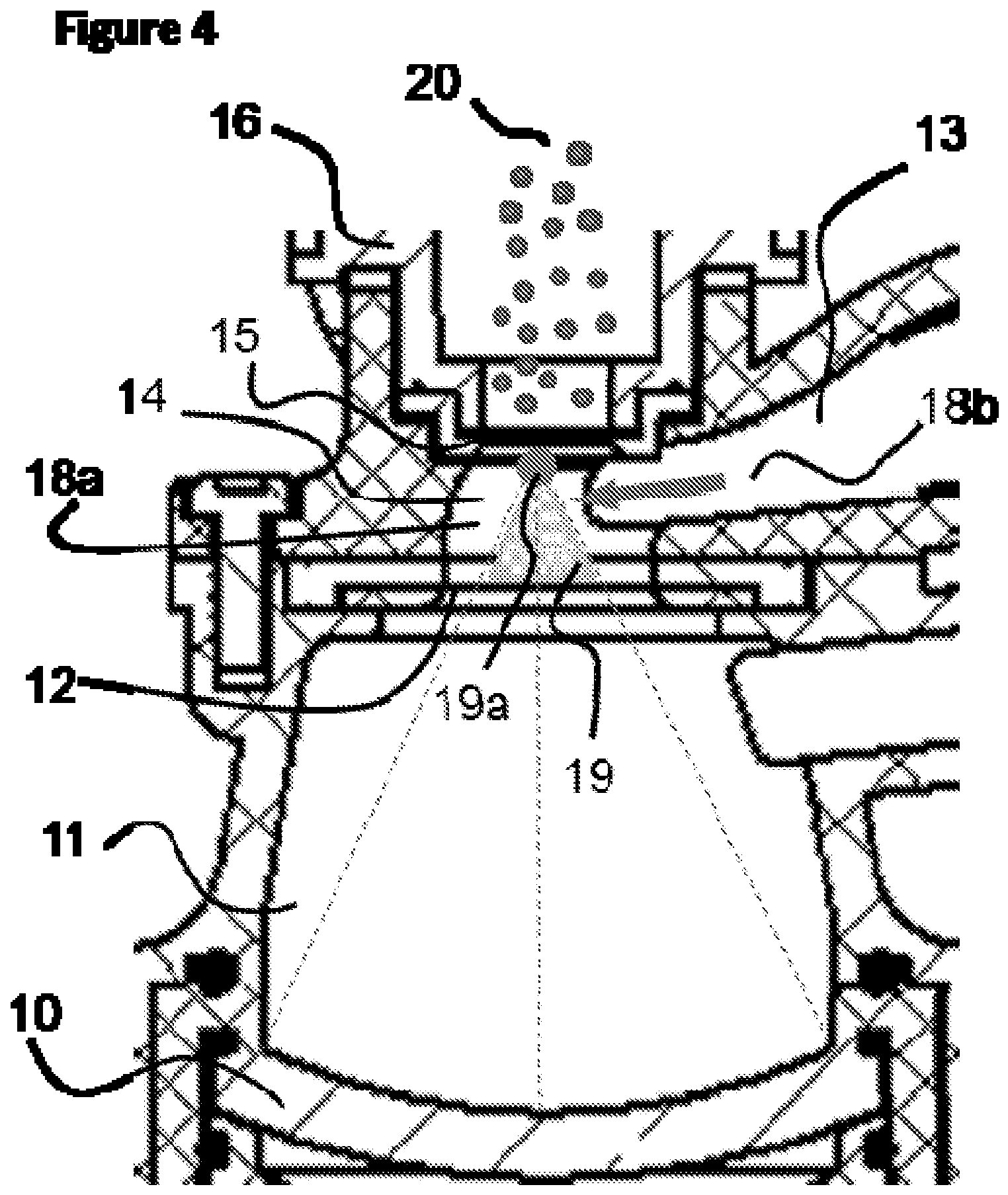 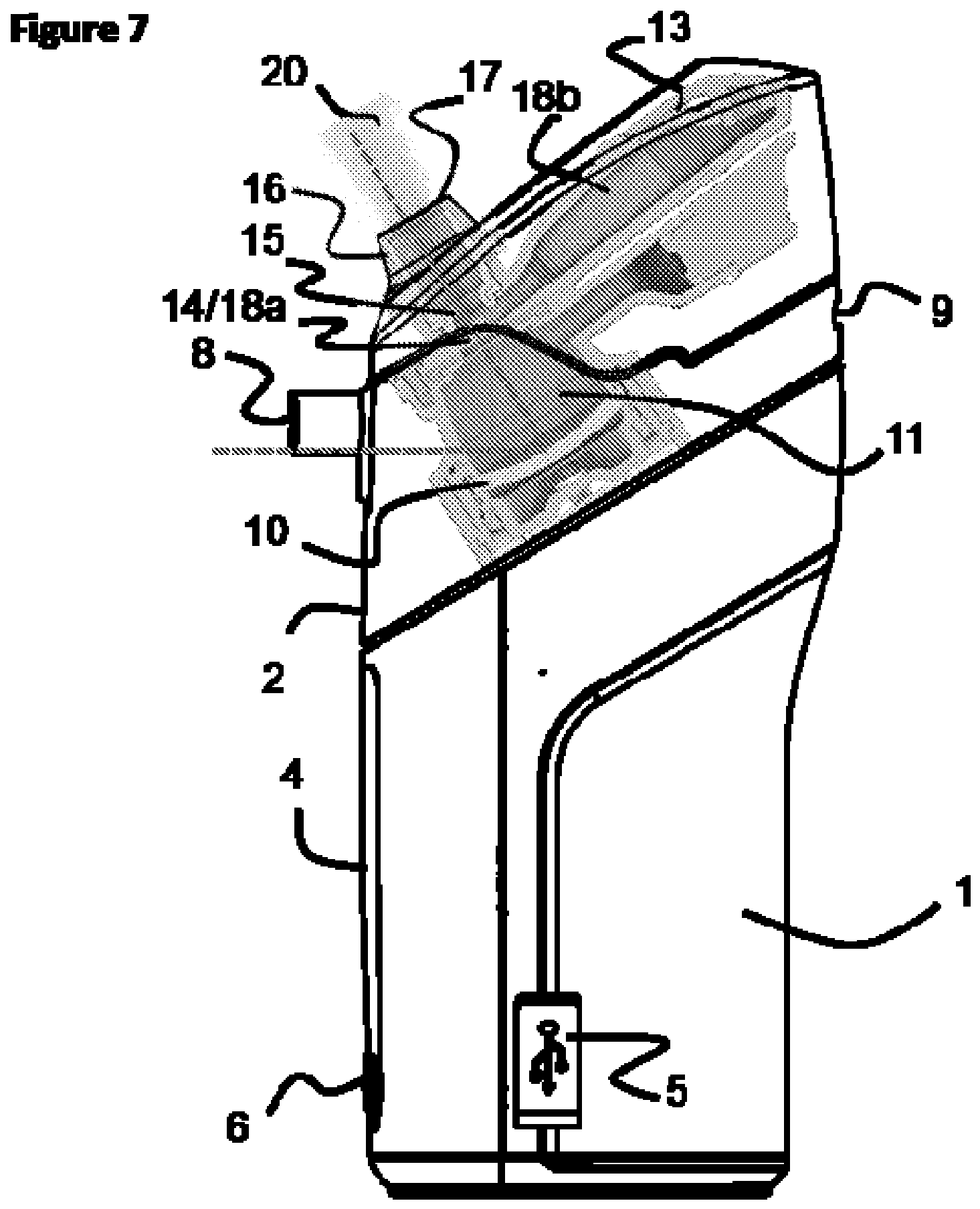 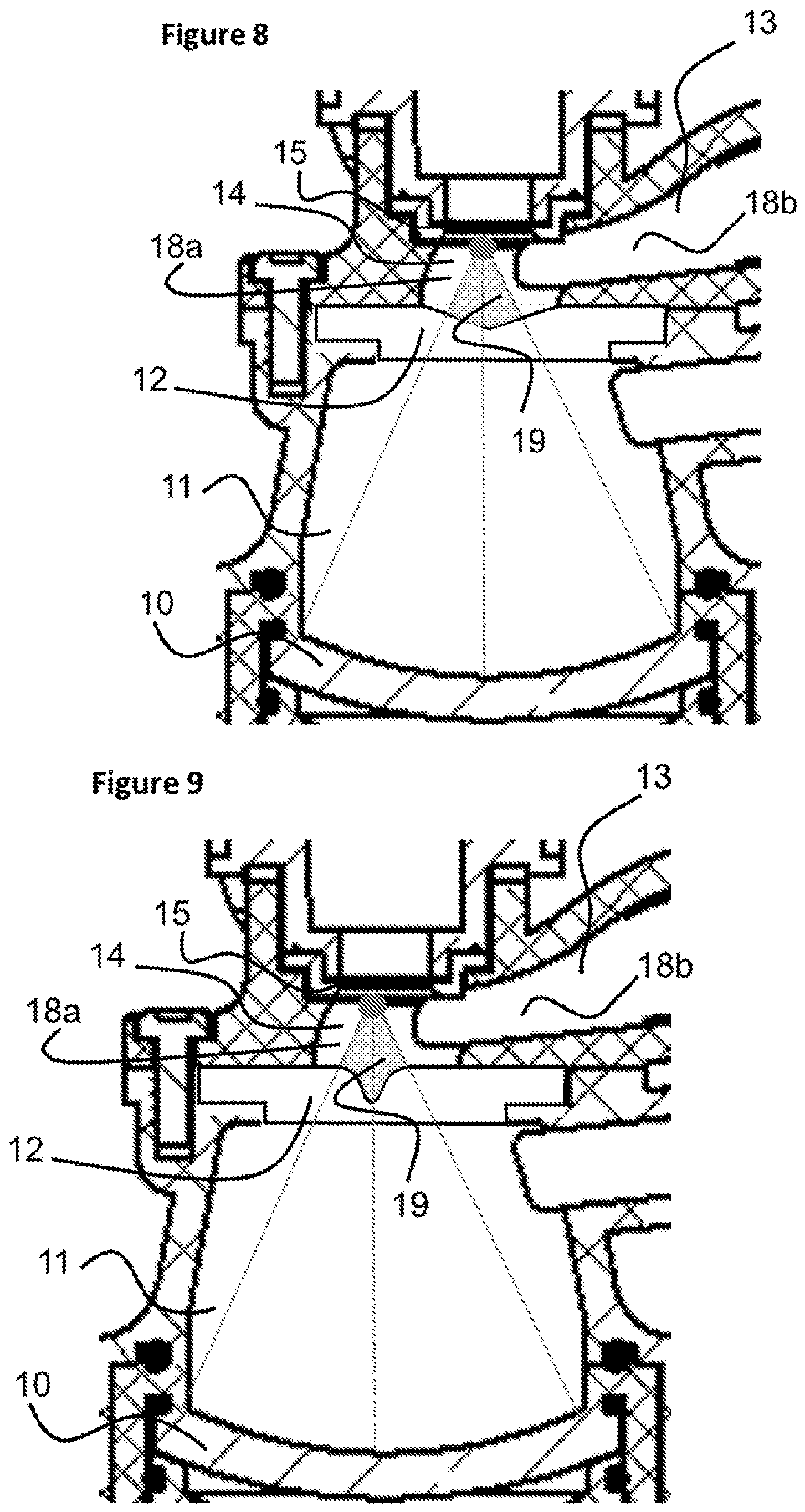