[0002] The use of Li-ion batteries (LIBs) as rechargeable power sources represents a promising technology for use in consumer electronics, automobiles and energy storage. However, there are substantial technical challenges to the use of LIBs for consumer electronics, automobile and energy storage applications. Further improvement of LIBs require the development of new cathode, anode and electrolyte materials with desired properties.
[0003] Silicon-carbon composites are promising anode materials for LIBs due to their excellent high capacity and long cycle life. Among many approaches to produce these materials, incorporating silicon into carbon through a chemical vapor deposition (CVD) process produces uniform material structure and good performance. For best battery performance the silicon to carbon ratio in the composite should be constant through the anode
[0004] CVD of silicon onto carbon materials is usually performed using a batch type reactor such as fluidized bed reactors (FBR reactor), rotary reactors and V-blenders in order to control the deposition time and hence produce a constant silicon to carbon ratio in the material. Batch processes have significant inefficiencies when operated at large scale. For example, batch processes incur large down-times due to cool-down and re-heat requirements. At the end of each batch, the equipment needs to be cooled down (typically to room temperature) before the finished product can be removed from the reaction equipment and fresh starting materials can be re-charged to the equipment. The equipment then needs to be re-heated to a high temperature for subsequent batch production. The prior art processes of heating, cooling and re-heating the equipment uses a lot of energy (electricity) and leads to long down times.
[0005] Polycrystalline silicon is the raw material for solar cells and is produced through a chemical vapor deposition (CVD) process. In this CVD process, a silicon-containing precursor is decomposed on a silicon substrate to form solid silicon. In some cases, the CVD of silicon is performed in a FBR reactor.
[0006] Polysilicon production through an FBR based CVD process provides high throughput compared to traditional Siemens type CVD process, which is inherently a batch process. The high throughput is due at least in part because the CVD process enables a continuous supply of silicon precursor and continuous separation of final product from the starting silicon seeds. In some implementations, the silicon precursor gas may include one or more of SiH4 (monosilane), Si2H6 (disilane), Si3H8 is trisilane), SiH2Cl2 (dichlorosilane), SiHCl3 (trichlorosilane), SiH2Br2 (dibromosilane), SiHBr3 (tribromosilane), SiH2I2 (diiodosilane), SiHI3 (triiodosilane), SiI4 (silicon tetraiodide).
[0007] In the FBR-CVD process, small silicon seeds are supplied as substrate for silicon deposition through chemical decomposition of a silicon containing precursor. The silicon particle size grows bigger with silicon deposition. The large silicon particles and small silicon seeds can be separated aerodynamically in the FBR reactor since they have different practical size and weight. The larger silicon particles will drop down to the bottom of the FBR chamber and be removed from the chamber. Alternatively, they can be removed from the reactor and separated by sieving. Even with such separation techniques the resulting product has particles which have spent significantly different residence times in the reactor undergoing deposition. However, this has no effect on the usefulness of the polysilicon product since there is no change in composition. In the case of silicon deposition on carbon, having significantly different deposition times would cause the product to have a mix of silicon to carbon ratios which is deleterious to its use as an anode material in Lithium ion batteries.
[0008] A CVD process to produce silicon-carbon composite can use a similar FBR reactor as used for polysilicon production, but has the additional challenges of maintaining a constant silicon to carbon ratio and separating the final product from the starting carbon powders. In the silicon-carbon composite system, the composite typically has similar morphology, particle size, and density to the starting carbon particles. As a result, it is difficult to separate the silicon-carbon composite with carbon powder using the same separation processes employed in current FBR CVD process for polysilicon production. The use of such a reactor in continuous mode with ongoing addition of graphite material and continuous removal of product would provide an inferior product with an inconsistent silicon to carbon ratio. There is a need for an improved FBR-CVD process in the polysilicon process in order to use it for silicon-carbon composite production.
[0009] The document US 2012/0282527 A1 describes a process for producing nanocomposite materials for use in batteries. In the process, a composite material is prepared by CVD in a fluidized bed reactor by contacting a gaseous electroactive material precursor with a carbonaceous, exfoliated nanosheet material.

[0010] The invention is defined in the independent claim. The dependent claims describe embodiments of the invention.
[0011] The present technology produces silicon-carbon composite materials through a chemical vapor deposition process in a fluidized bed reactor on a semi-continuous basis. A process is disclosed that makes it possible to produce the composite particles which have similar density and morphology between the starting material and the final product on a continuous basis. A semi-continuous process and apparatus may produce a silicon-carbon composite and can precociously control the silicon morphology in the carbon material to avoid the over growth of silicon particles. The silicon-carbon composites produced from the present technology have completely different morphology and properties compared to the polysilicon produced from FBR-CVD process. The silicon-carbon composites also have different application to polysilicon.
[0012] A high temperature fluidized-bed reactor and process produces a silicon (Si) composite anode material that can be used to substantially increase lithium-ion battery specific capacity (2,000mAh/gr+) compared to traditional graphite anode materials (375mAh/gr) used in most lithium batteries today. In the apparatus, Silicon particles are deposited, bonded, and uniformly embedded in the graphite / graphene based multi-layered nano-platelets to form a stable and commercially scalable silicon composite anode material. The silicon composite anode material may be used for lithium batteries in consumer electronic devices, electric vehicles, and energy storage systems for renewables. This apparatus, process, and material has demonstrated great potential for dramatically improving energy density, reducing cell size and weight, all while lowering levelized costs of lithium batteries.
[0013] An implementation includes a method for generating a composite. The method includes performing controlled silicon loading on a first carbon substrate in a reactor. The carbon substrate is transferred from the reactor to a reservoir. A controlled silicon loading is performed on a second carbon substrate in the reactor while the first carbon substrate cools in the reservoir.
[0014] An implementation may include an apparatus for generating a composite. The apparatus may include a reactor and a reservoir. The reactor may perform a silicon vapor deposition process to generate a first carbon substrate. The reservoir may receive the first carbon substrate and allow the reactor to perform a second silicon vapor deposition process to generate a second carbon substrate while the first carbon substrate cools in the reservoir.
[0015] An implementation may include a composite structure. The composite structure may include a plurality of graphene layers and a plurality of silicon particles. The plurality of graphene layers may form two or more gaps, wherein each gap is formed by a respective upper graphene layer and a respective lower graphene layer of the plurality of graphene layers. The plurality of silicon particles may be embedded within each gap formed by the plurality of graphene layers.

FIGURE 1 illustrates a block diagram of an apparatus for producing silicon-carbon composites.

FIGURE 2 illustrates a method for generating a silicon-carbon composite.

FIGURE 3 illustrates a block diagram of an apparatus for performing a semi-continuous CVD process.

FIGURE 4 is a block diagram of a reactor for performing a semi-continuous deposition process.

FIGURE 5 is a block diagram of a vessel with multistep capability.

FIGURE 8A is an illustration of a silicon-graphene composite generated by an FBR reactor.

FIGURE 8B illustrates another silicon-graphene composite generated by an FBR reactor.

FIGURE 9 illustrates a block diagram of a computing environment for use with the present technology.

1. A method for generating a composite, comprising:

performing controlled silicon loading on a first carbon substrate in a reactor (400,500,610) of a reactor-reservoir system to produce a silicon-carbon composite;

performing a controlled silicon loading on a second carbon substrate in the reactor (400, 500, 610) of the reactor-reservoir system while the first silicon-carbon composite cools in the reservoir (420, 502, 630),

2. The method of claim 1, wherein the reactor-reservoir system includes a fluidized bed reactor.

4. The method of claim 3, wherein the silicon-graphene and silicon-graphite composites are produced using chemical vapor deposition.

5. The method of claim 3, wherein the silicon-graphene and silicon-graphite composites are produced using thermal deposition.

6. The method of any one of the preceding claims, wherein a gaseous material precursor decompose via chemical vapor deposition or thermal deposition.

7. The method of any one of the preceding claims, further comprising:

receiving carbon powder into the reactor of the reactor-reservoir system;

providing an inert gas into the reactor of the reactor-reservoir system;

introducing reactive gas and a silicon precursor in the reactor of the reactor-reservoir system;

performing the controlled silicon loading on the first silicon substrate for a predetermined period of time; and

8. The method of claim 7, further comprising:

cooling the silicon-carbon composite in the reservoir while the controlled silicon loading on the second carbon substrate is performed.

9. The method of any one of the preceding claims, wherein the silicon-carbon composite has a secondary, ball-like shape resulting from agglomerated silicon-graphene sheets.

11. The method of claim 10, wherein the secondary, ball-like shaped silicon-carbon composite particles are transferred into the reactor for silicon deposition to further increase the silicon loading. 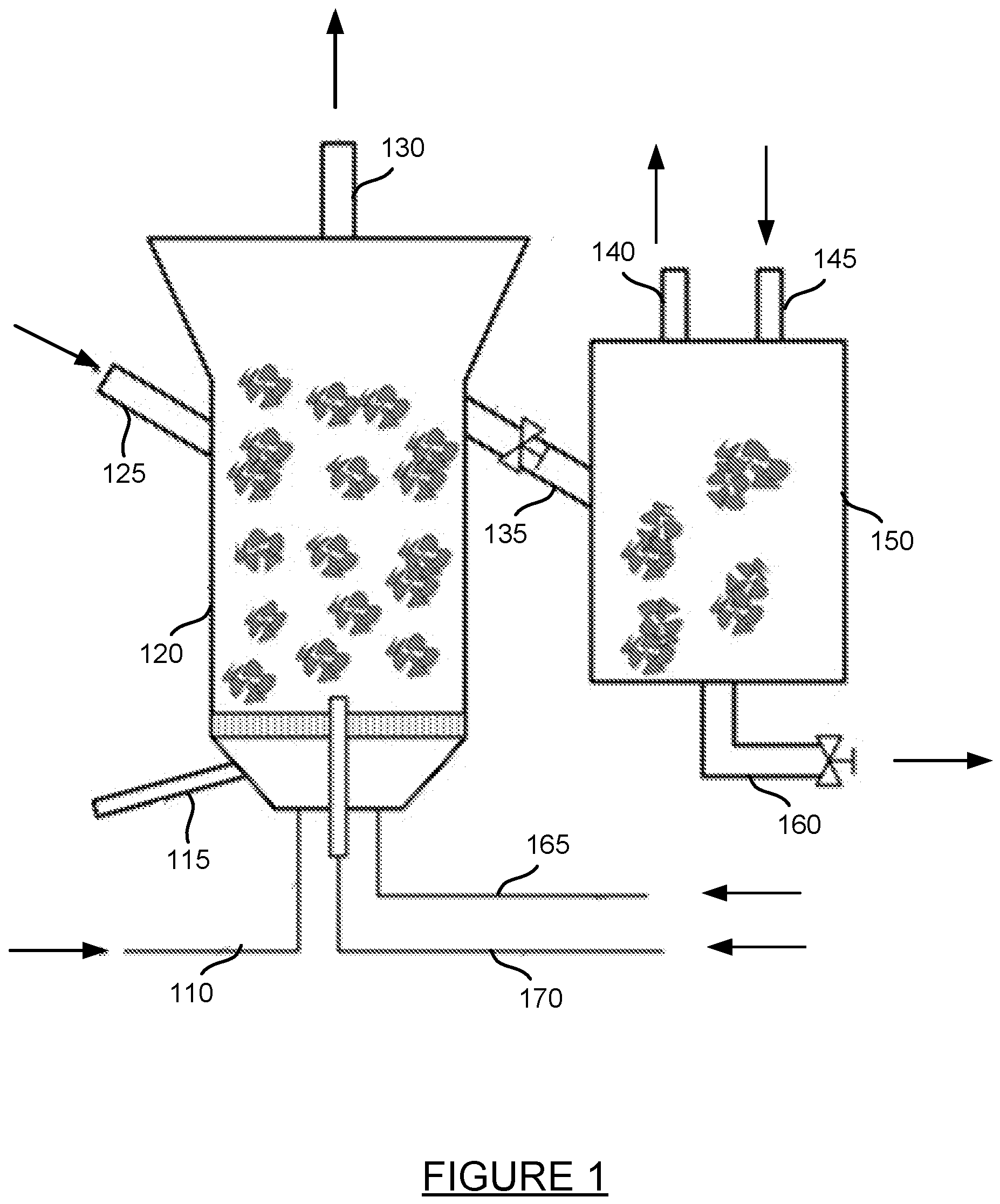 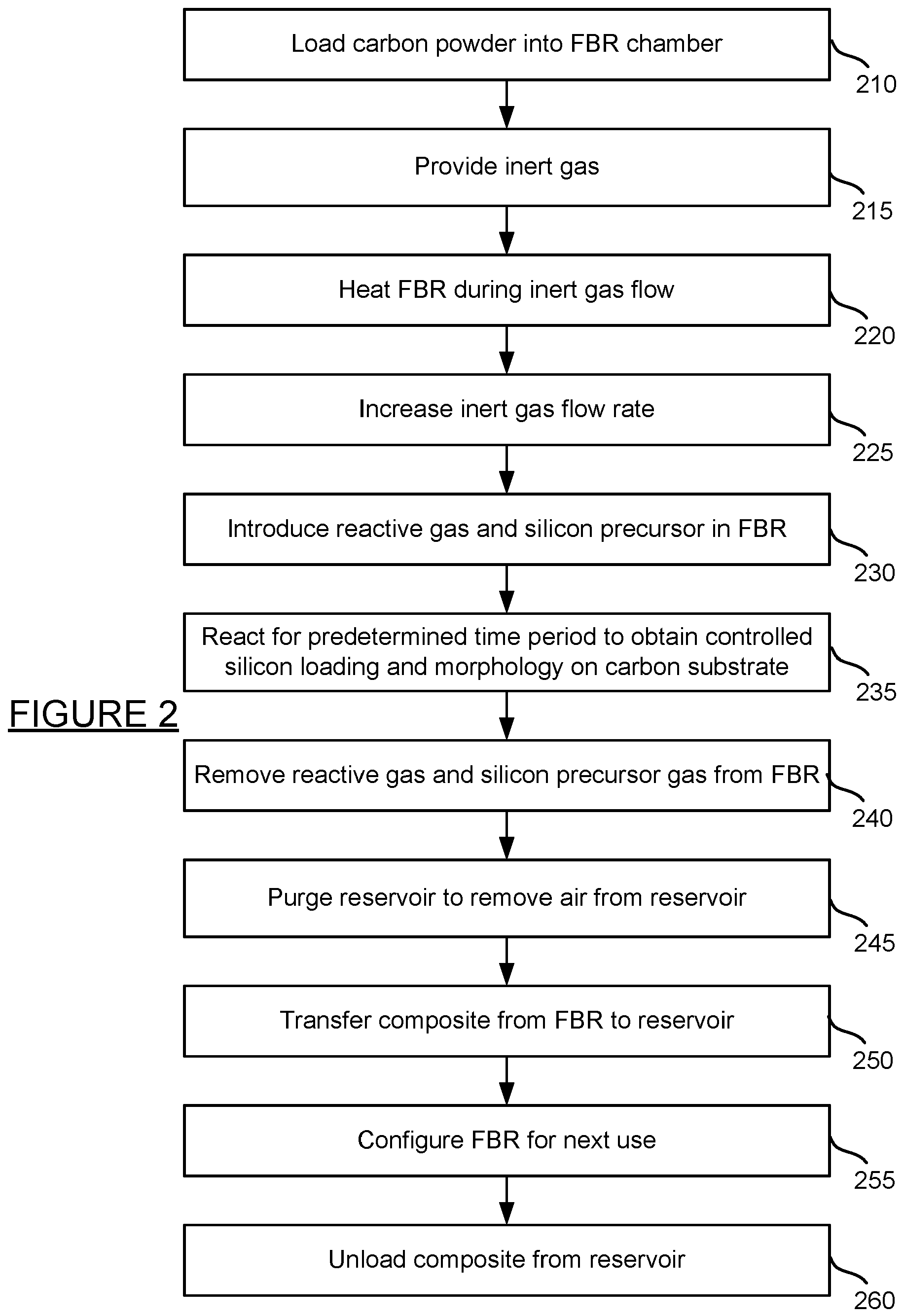 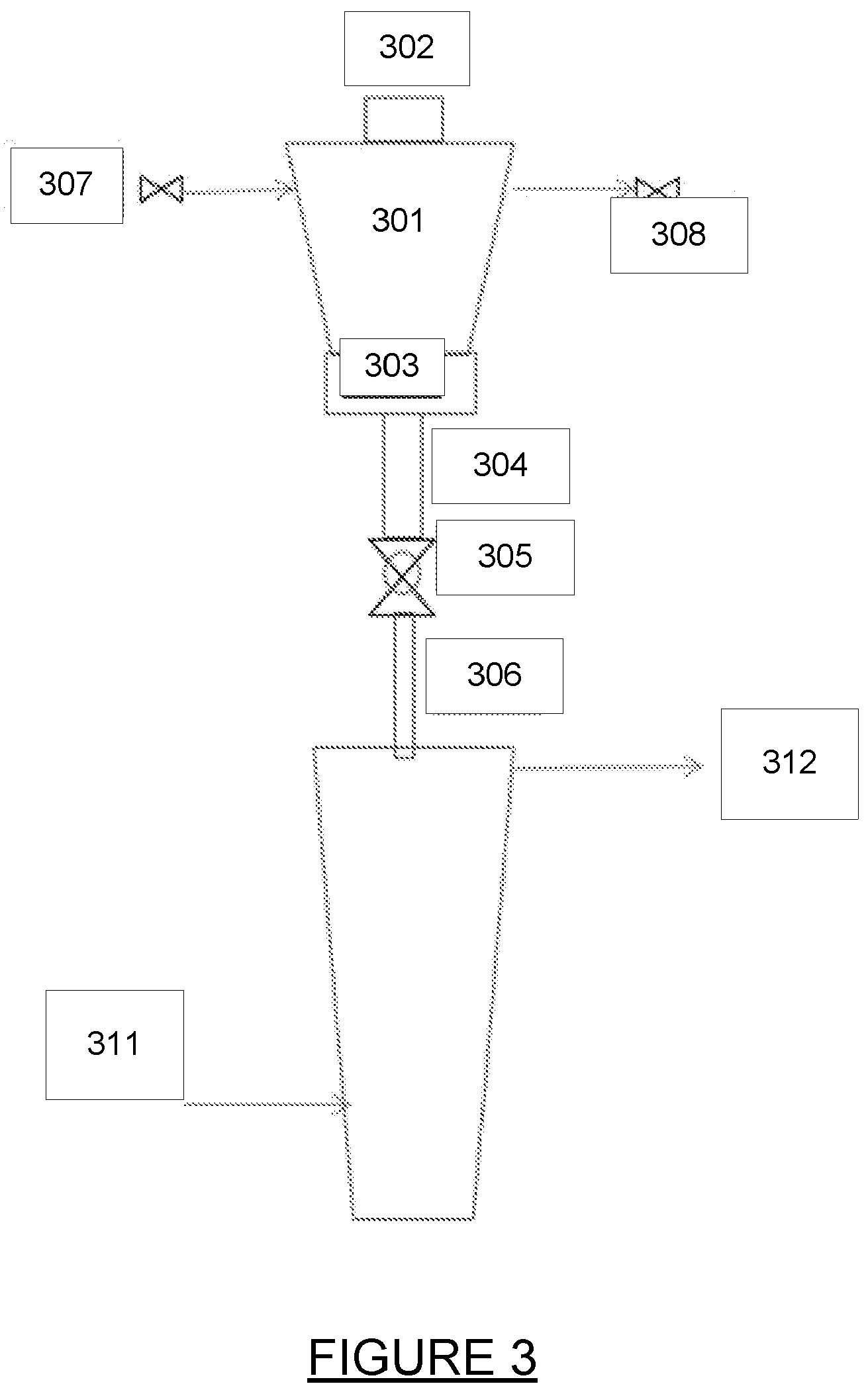 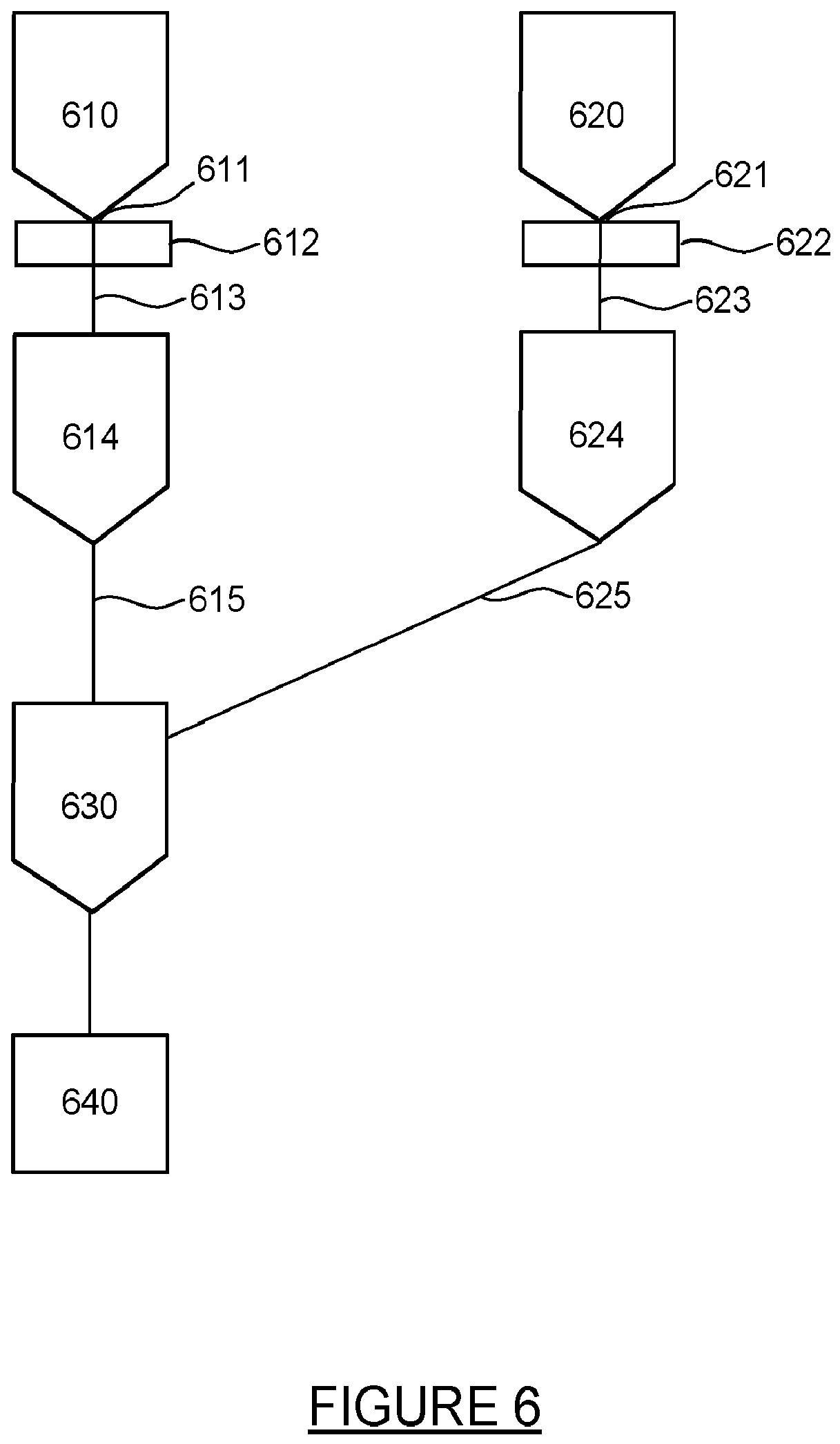 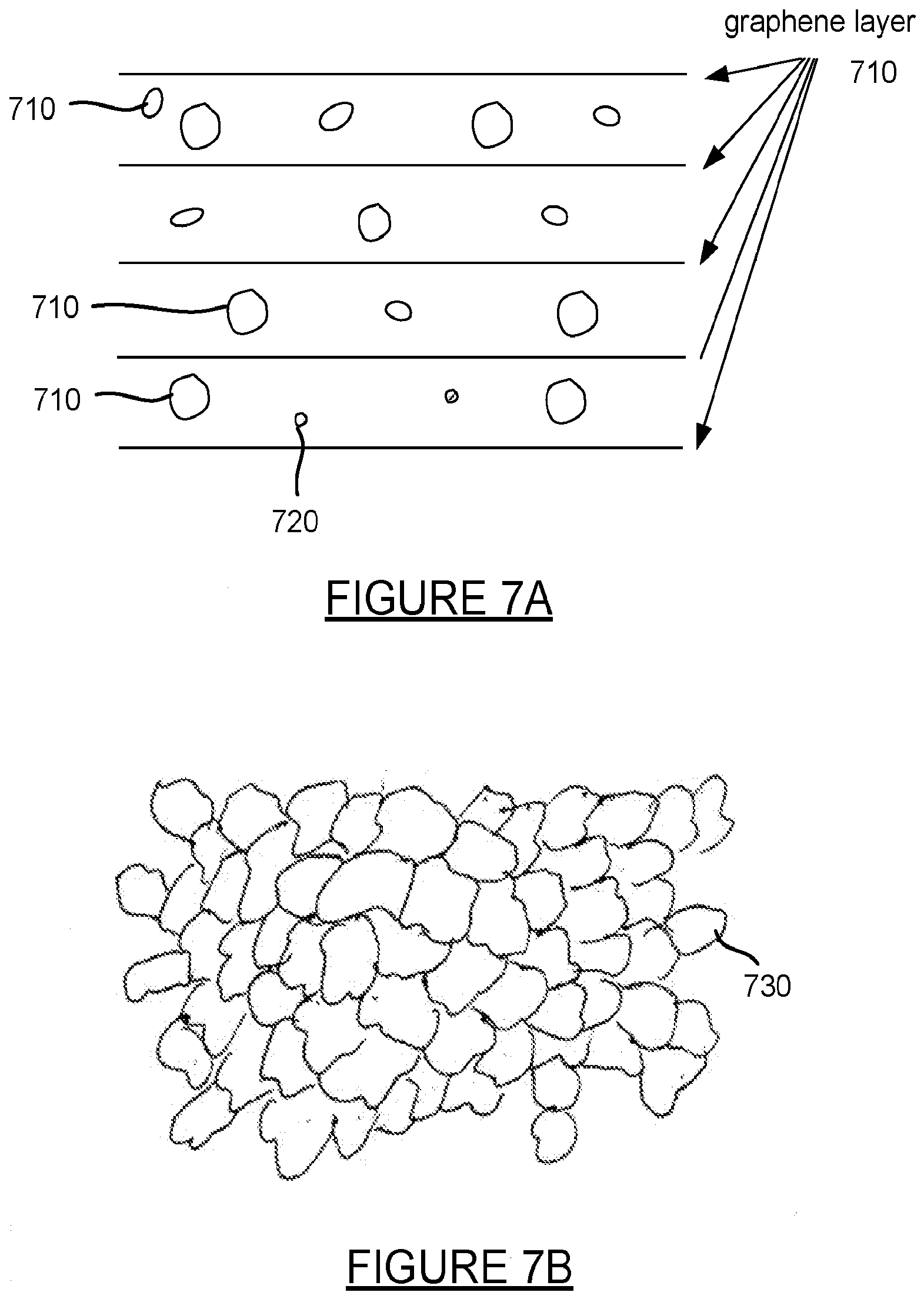 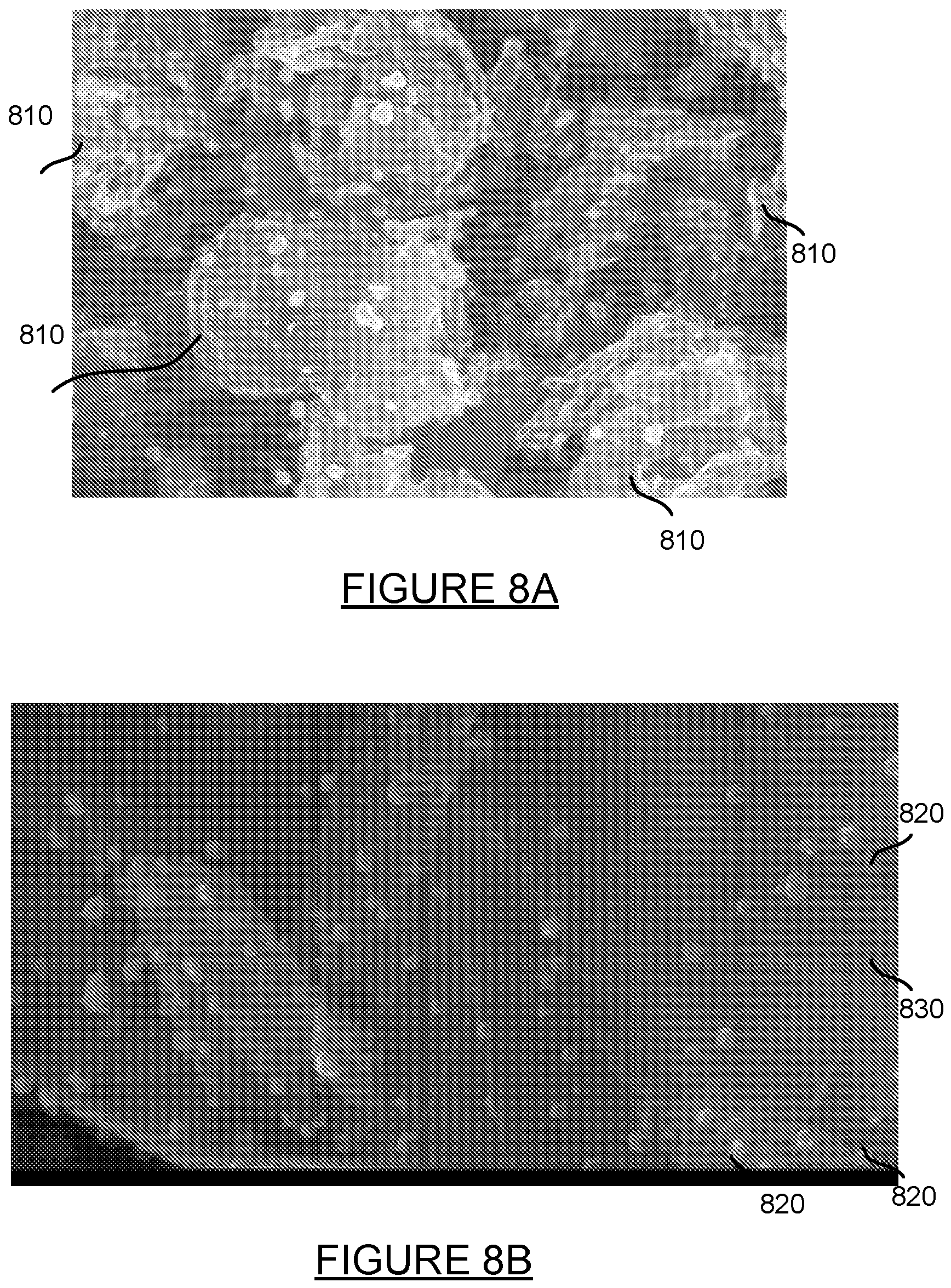 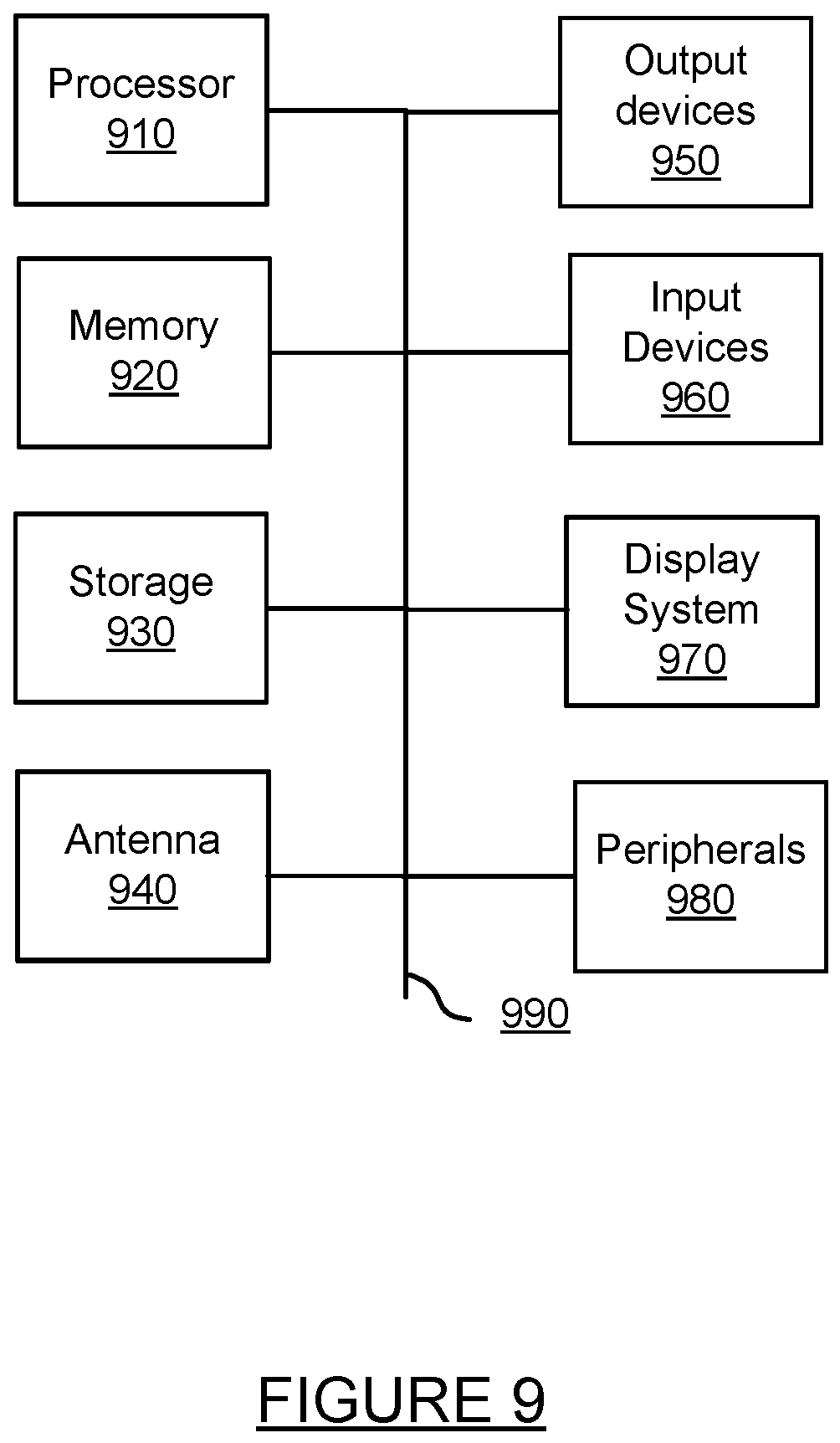