[0001] In optical access networks, carrier distribution has been considered as a promising scheme in realizing a low-cost light source for uplink signal. In carrier distribution schemes, an optical carrier signal is delivered from an optical source positioning in a central office to a remote device. The remote device then modulates uplink data onto the received optical carrier signal, and sends the modulated carrier signal back to the central office. However, current modulators employed in such systems are either temperature sensitive or only operate at a relatively low speed to avoid overheating. As a result, carrier distribution is not feasible if the remote device is uncooled and is therefore exposed to temperatures in excess of 85 degrees Celsius (°C) and/or if the application requires high speed operation. In such cases, conventional modulators are unable to properly modulate a usable uplink signal.
[0002] X. S. Yao, "Polarization insensitive antenna remoting link with frequency conversion gain", IEEE Photon. Technol. Lett., vol. 12, pp. 1382-1384, 2000, demonstrates a novel photonic link that simultaneously achieves frequency conversion, optical amplification, polarization sensitivity elimination, and fiber dispersion effect minimization. The link also uses low loss and less expensive phase modulators to replace intensity modulators and thus eliminates modulator bias problems.
[0003] R.D. Esman ; M.J. Marrone, "Polarization-independent Fiber-optic Microwave Modulator", LEOS 1993 Summer Topical Meeting Digest on Optical Microwave Interactions/Visible Semiconductor Lasers/Impact of Fiber Nonlinearities on Lightwave Systems/Hybrid Optoelectronic Integration and Packaging, disclose a passive scheme to address low-frequency modulators over conventional fiber links, termed orthoconjugating loop mirror (OCLM), which uses a polarization beam splitters (PBS) with the fibers from the output port connected in a loop that contains a 90° Faraday rotator. They expands the technique to include wideband dual-feed traveling wave devices.
[0004] WO 94/25883 A1 discloses an apparatus and method for converting a signal of arbitrary polarization to one of preselected polarization, e.g. for use by a sensor, transducer, etc. A signal splitter divides the input signal into its orthogonal linearly polarized components, and launches the components from a pair of output ports. The signals counterpropagate to the opposite port, and, while couterpropagating, are rotated into the same linear polarization state. In one embodiment, the rotation is done by a pair of complementary 45 degree Faraday rotators; in another, by one 90 degree rotator. In the former, the signal is recombined at the splitter in the initial state of polarization that in which the signal initially entered the splitter; in the latter, the recombined signal is of orthoconjugate polarization to the input signal.
[0005] WO 01/35539 A2 discloses Systems and techniques for transmitting and processing an electrical signal through an opto-electronic system with an optical Brillouin amplifier (see Abstract). In one embodiment, a photonic RF link may be configured to achieve a number of signal processing operations in the optical domain, including frequency up or down conversion and signal amplification. The processing operations in the optical domain may be insensitive to the polarization state of light and substantially free of the fiber dispersion effect after transmission through a fiber link. Such a photonic RF link may also use low loss and less expensive optical phase modulators to avoid modulator bias problems in some optical intensity modulators.
[0006] B. Charbonnier, Sylvie Menezo, P. O'Brien, Aurelien Lebreton, J. M. Fedeli, and B. Ben Bakir, "Silicon Photonics for Next Generation FDM/FDMA PON," J. Opt. Commun. Netw. 4, A29-A37, 2012, show that frequency division multiplexing/frequency division multi-access passive optical networks provide a possible solution in terms of performance, manufacturability and cost to the specification of the second next generation passive optical access systems (NG-PON2). The upstream capacity of a particular implementation is experimentally evaluated, and the implementation of the required optical network unit in silicon photonics is analyzed, as this complementary-metal-oxide-semiconductor-compatible technology is well suited for mass market applications.

[0007] In one embodiment, the disclosure includes an apparatus as defined in claim 1. These and other features will be more clearly understood from the following detailed description taken in conjunction with the accompanying drawings and claims.

[0008] For a more complete understanding of this disclosure, reference is now made to the following brief description, taken in connection with the accompanying drawings and detailed description, wherein like reference numerals represent like parts.

FIG. 1 is a schematic diagram of an embodiment of a polarization independent reflective modulator (PIRM).

FIG. 2 is a schematic diagram of an embodiment of a cloud radio access network (CRAN) configured to employ a PIRM.

FIG. 3 is a schematic diagram of an embodiment of a CRAN configured to employ wavelength division multiplexing via a plurality of PIRMs.

FIG. 4 is a schematic diagram of an embodiment of a datacenter network configured to employ PIRMs.

FIG. 5 is a schematic diagram of an embodiment of a silicon waveguide based PIRM.

FIG. 6A is a top view of an embodiment of an external polarization beam splitter coupler (EPSBC) based PIRM.

FIG. 6B is a cross sectional view of the embodiment of the EPSBC based PIRM.

FIG. 7 is a schematic diagram of an embodiment of a grating coupler based PIRM.

FIG. 8 is a schematic diagram of an embodiment of a baseband unit (BBU) for use in a CRAN employing PIRMs.

FIG. 9 is a schematic diagram of another embodiment of a BBU for use in a CRAN employing PIRMs.

FIG. 10 is a schematic diagram of an embodiment of a Network Element (NE) configured to operate in a network employing PIRMs.

FIG. 11 is a flowchart of an embodiment of a method of PIRM based modulation.

FIG. 12 is a graph of power penalty versus modulator location deviation tolerance for an embodiment of a PIRM.

where Eout is the PIRM 100 output optical field as a function of time (t), Ein is the amplitude of the PIRM 100 input optical field, f(t) is the modulation waveform function of modulated data over time, T is the delay of the PIRM 100 optical path (e.g. light path 156 plus light path 158), δ is the modulator 159 location deviation away from the optical path center, êTE and êTM are the unit vectors of TE and TM polarizations, respectively, and êTE·êTE = 1, êTM·êTM = 1, êTE·êTM = 0. The total output power is expressed as:

an optical input (147) configured to receive an optical carrier (641);

forward a first polarized component of the optical carrier (641) along the first light path (156); and

receiving the first polarized component from the first light path (156) via the proximate end;

receiving the second polarized component from the second light path (158) via the distal end;

outputting the first modulated component to the second light path (158) via the distal end; and

outputting the second modulated component to the first light path (156) via the proximate end;

wherein the polarization beam splitter (655) is further configured to:

forward the combined modulated signal via the optical input in an opposite direction to a direction of the optical carrier (141);

the GCs (657, 656) are photoresist gratings configured to couple light into the silicon waveguide. 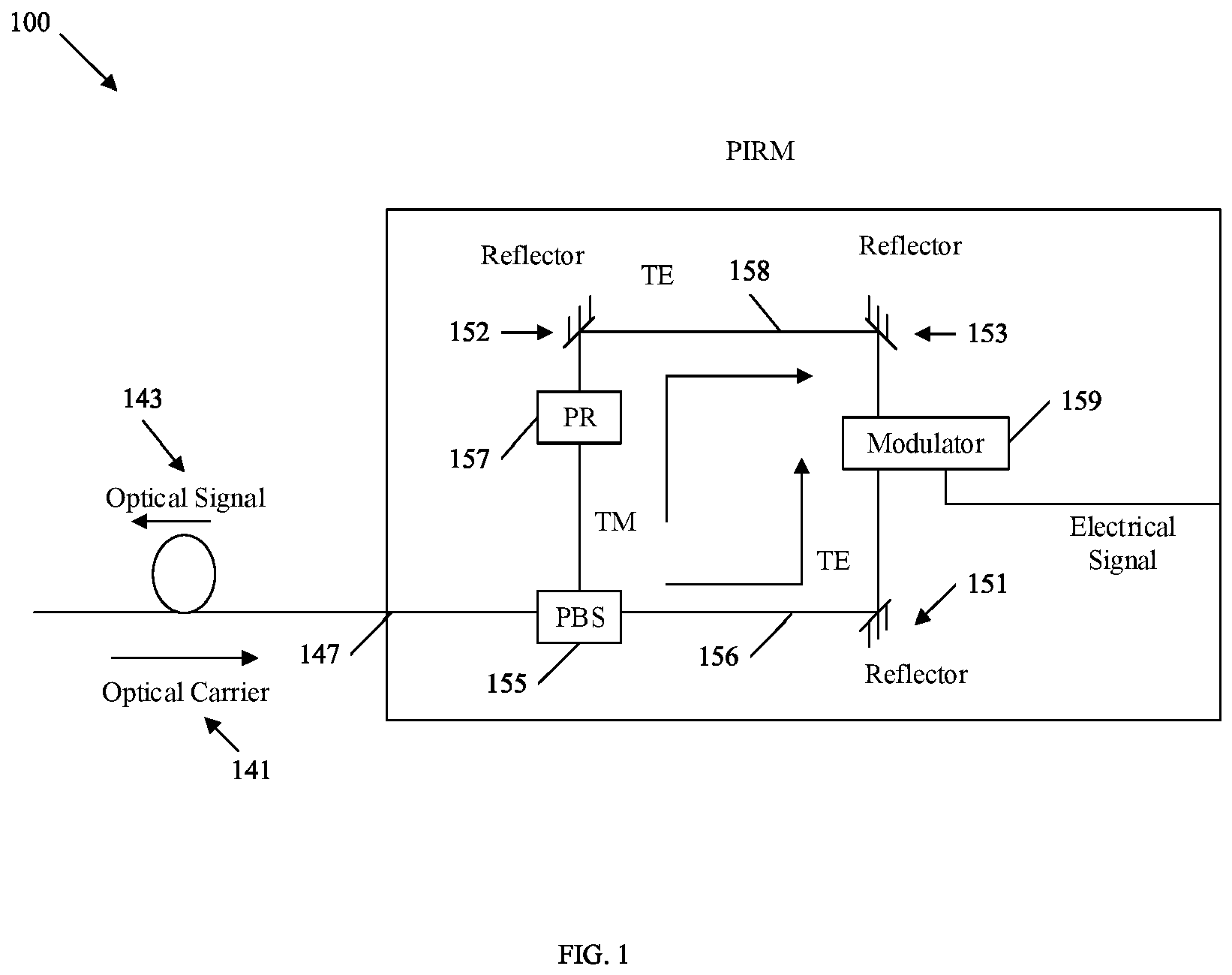 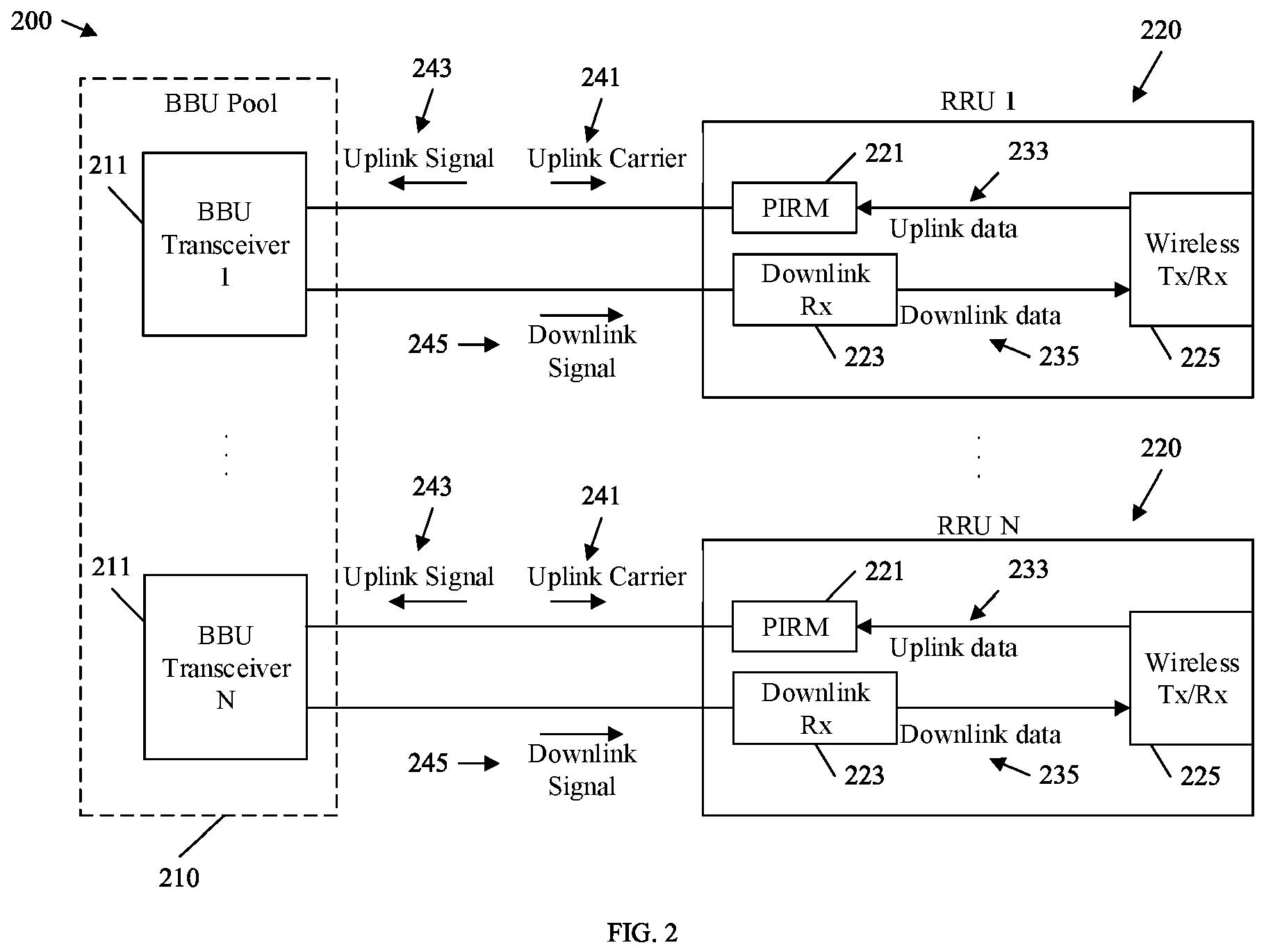 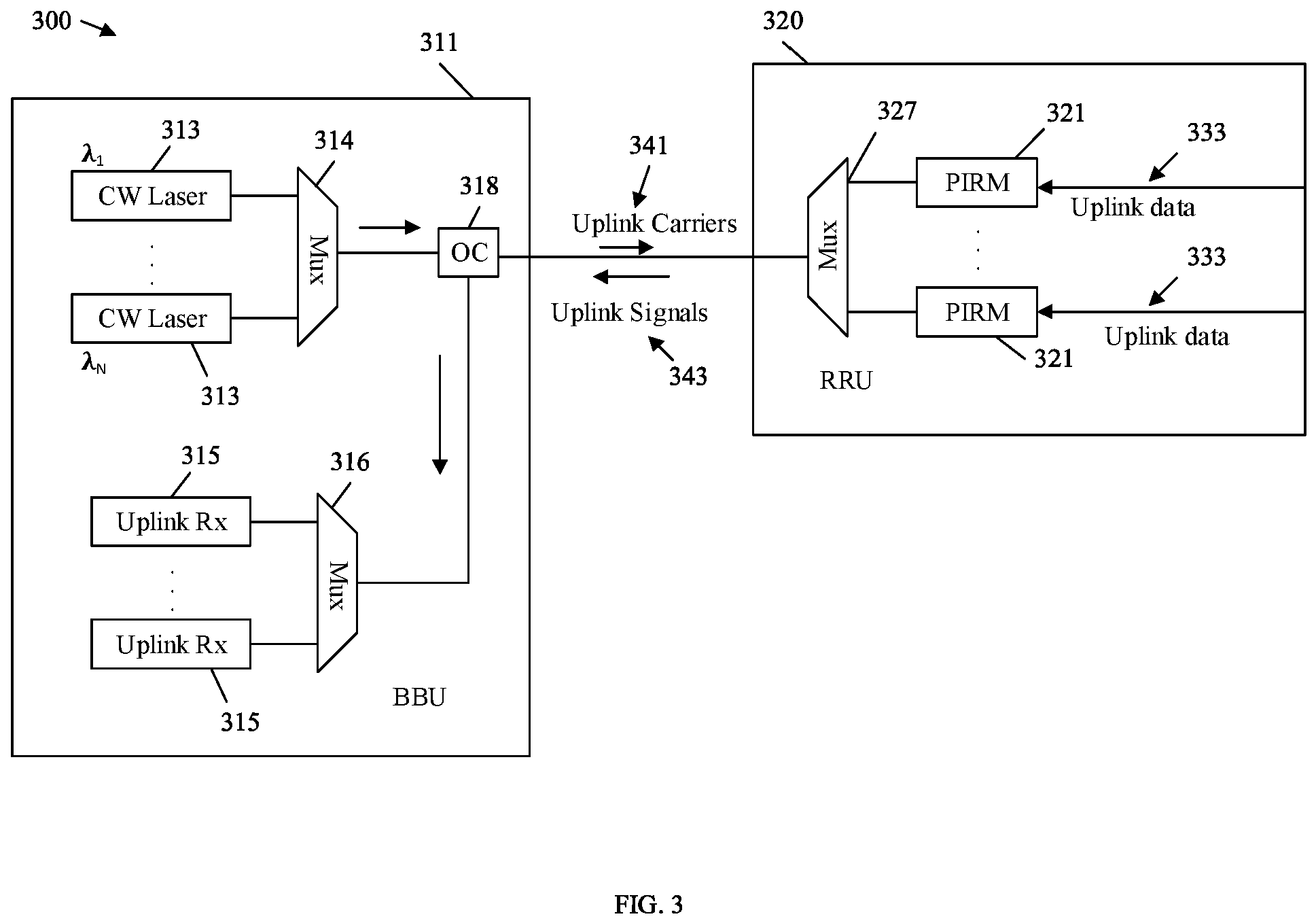 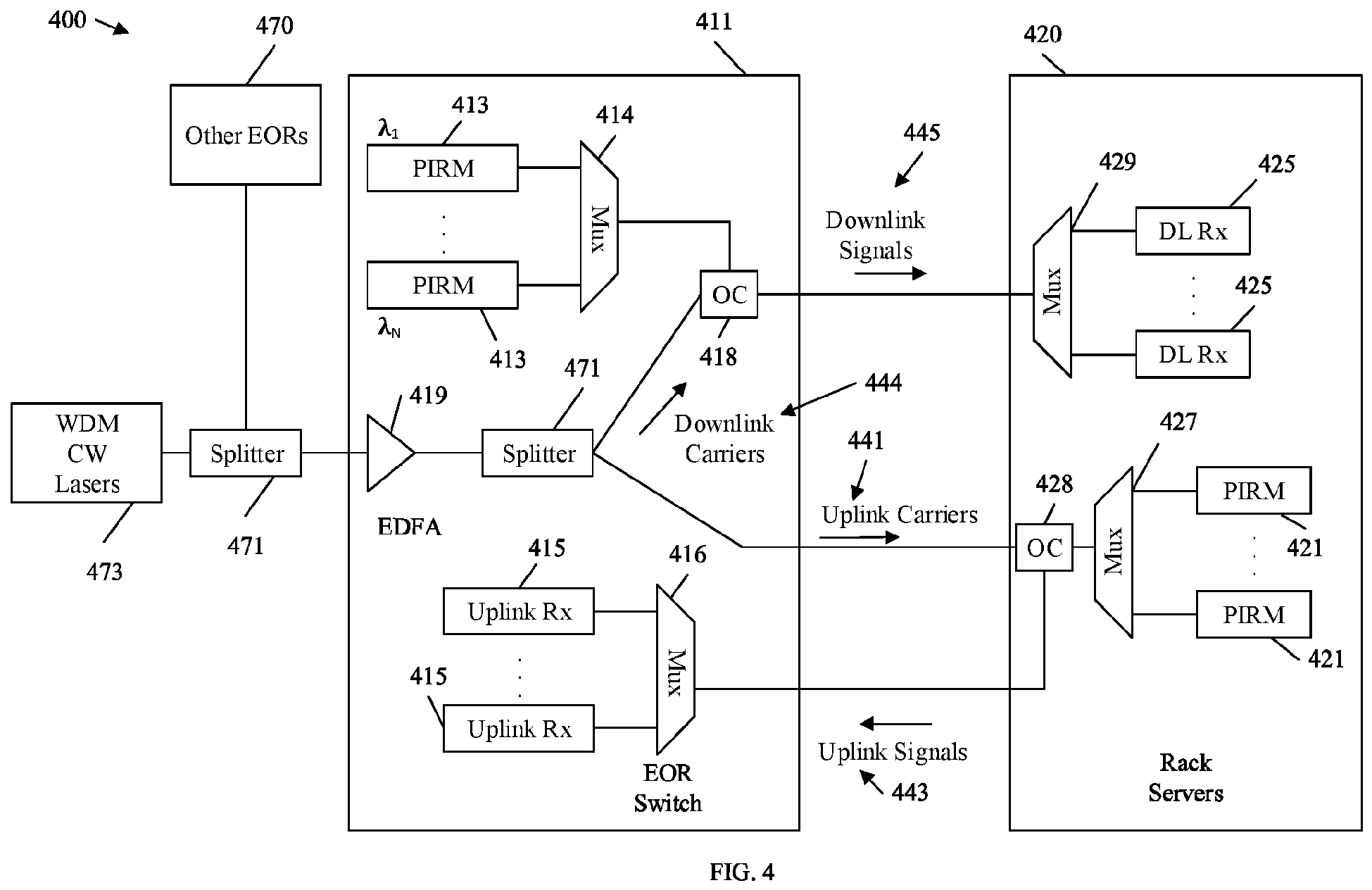 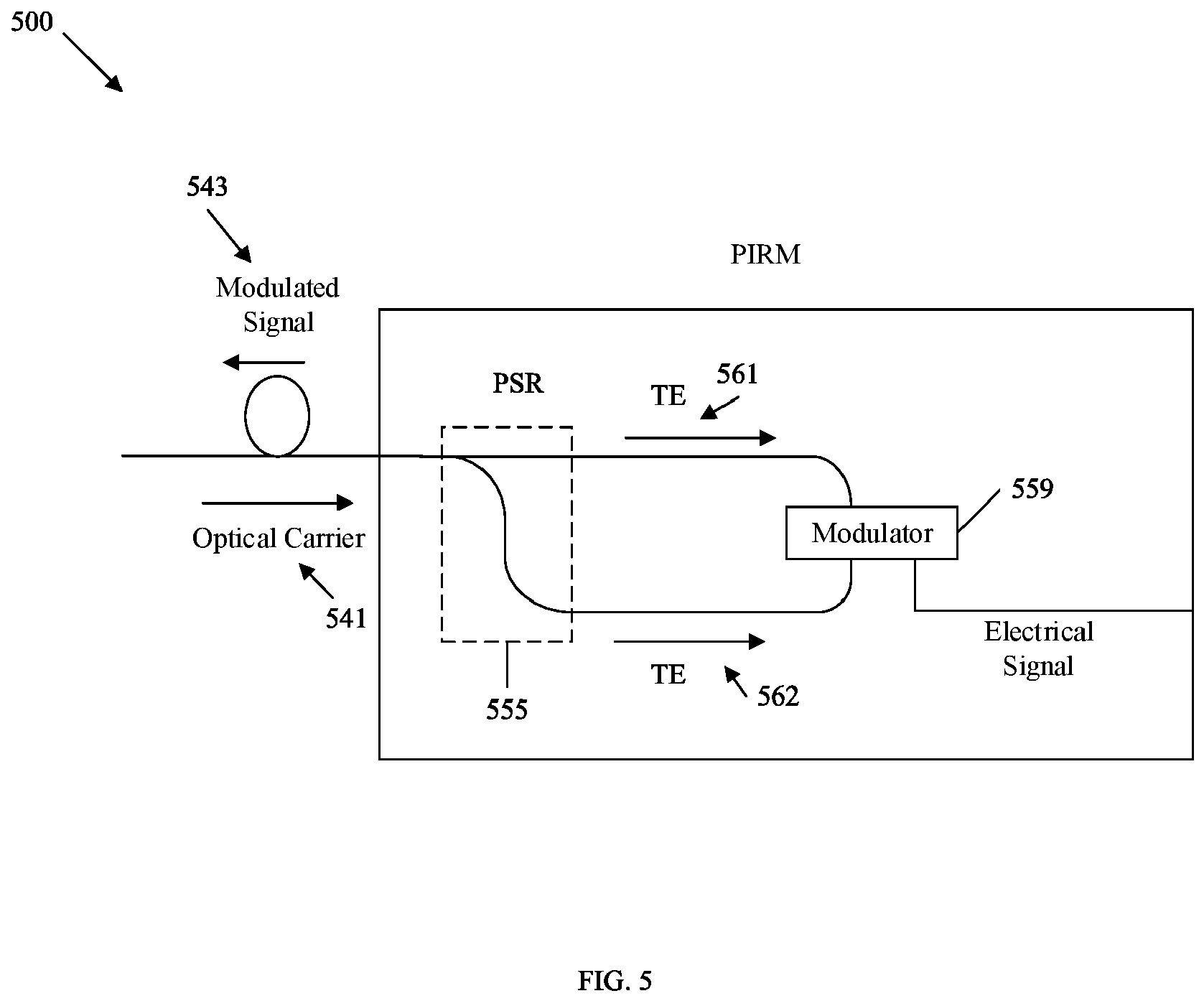 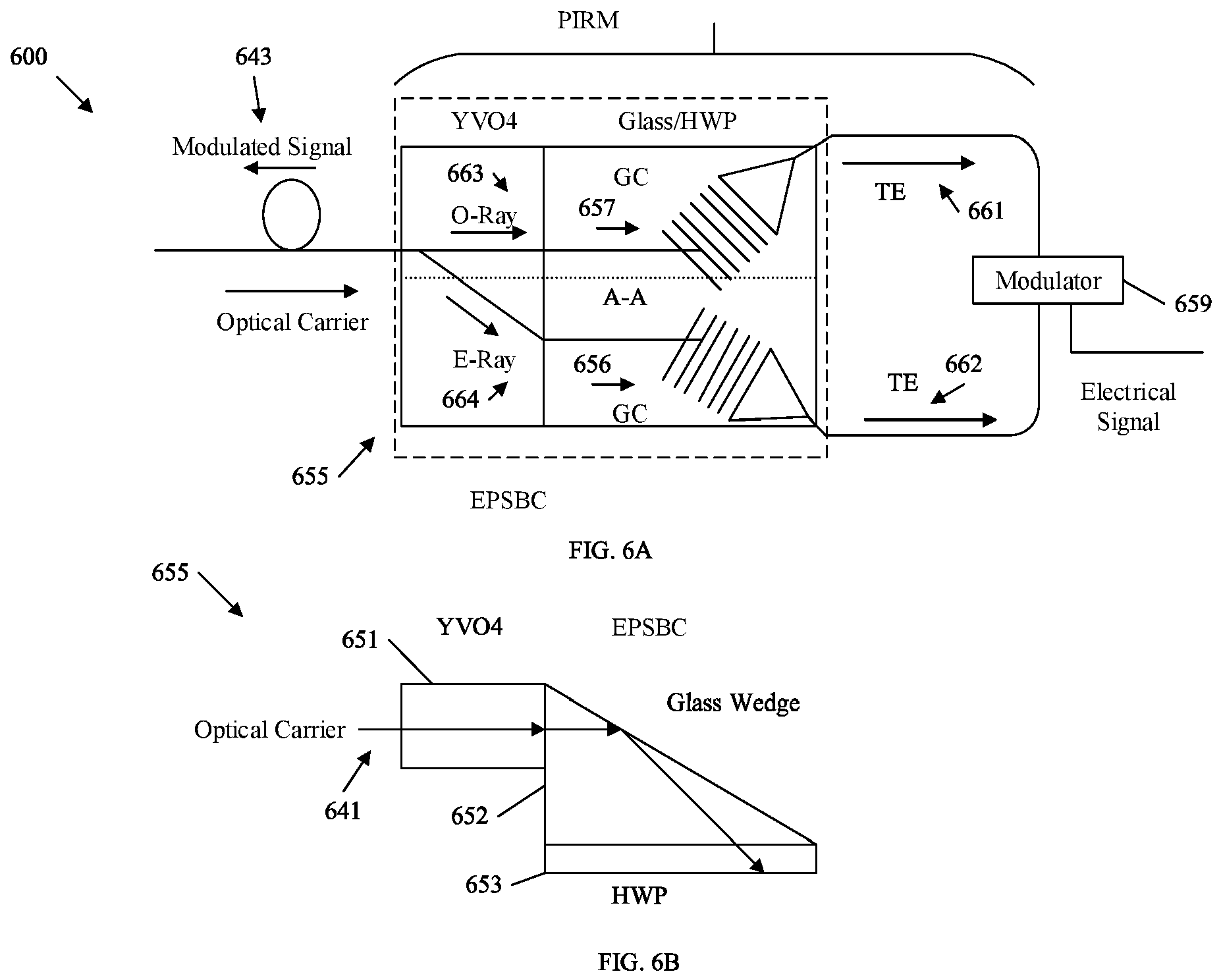 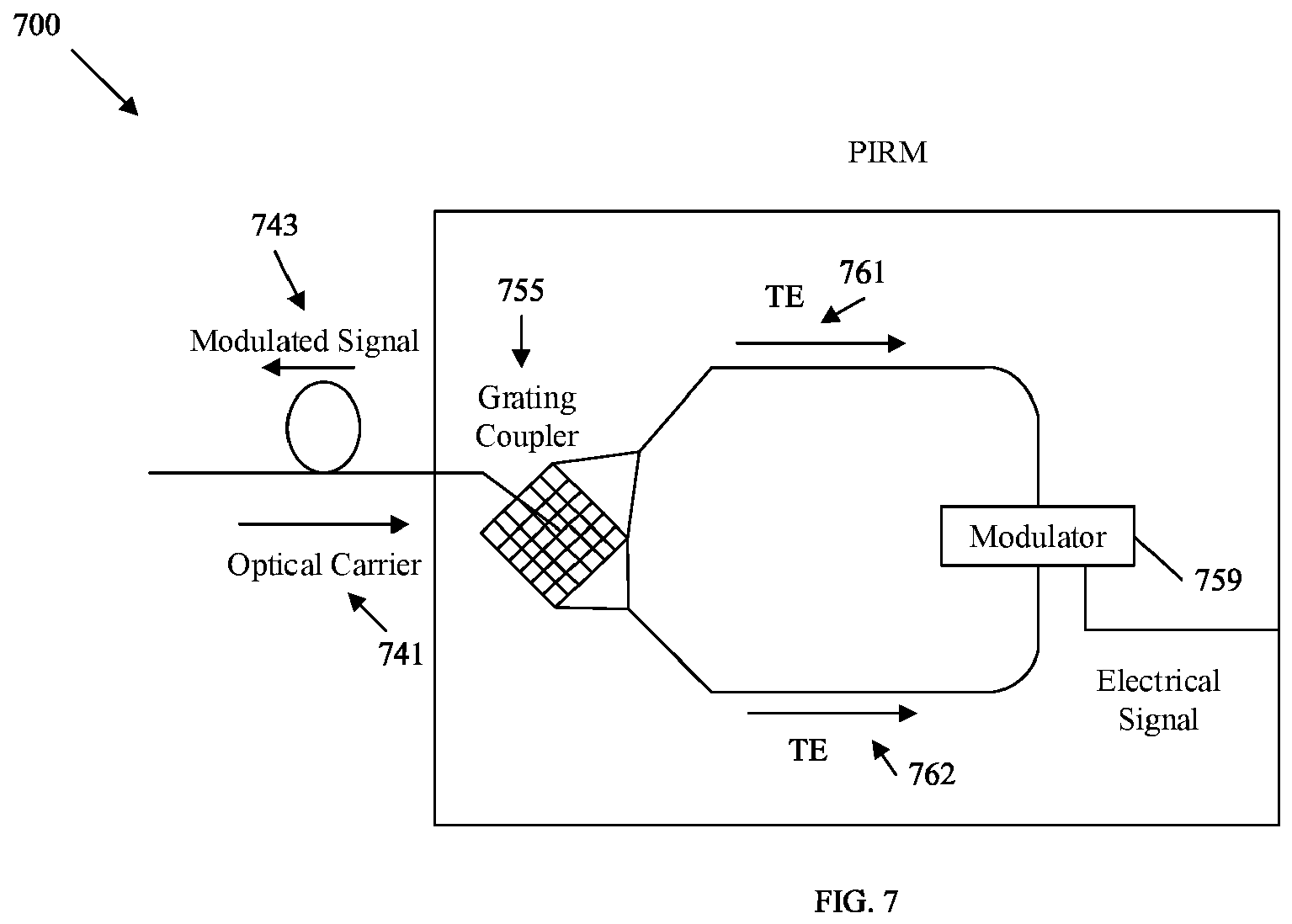 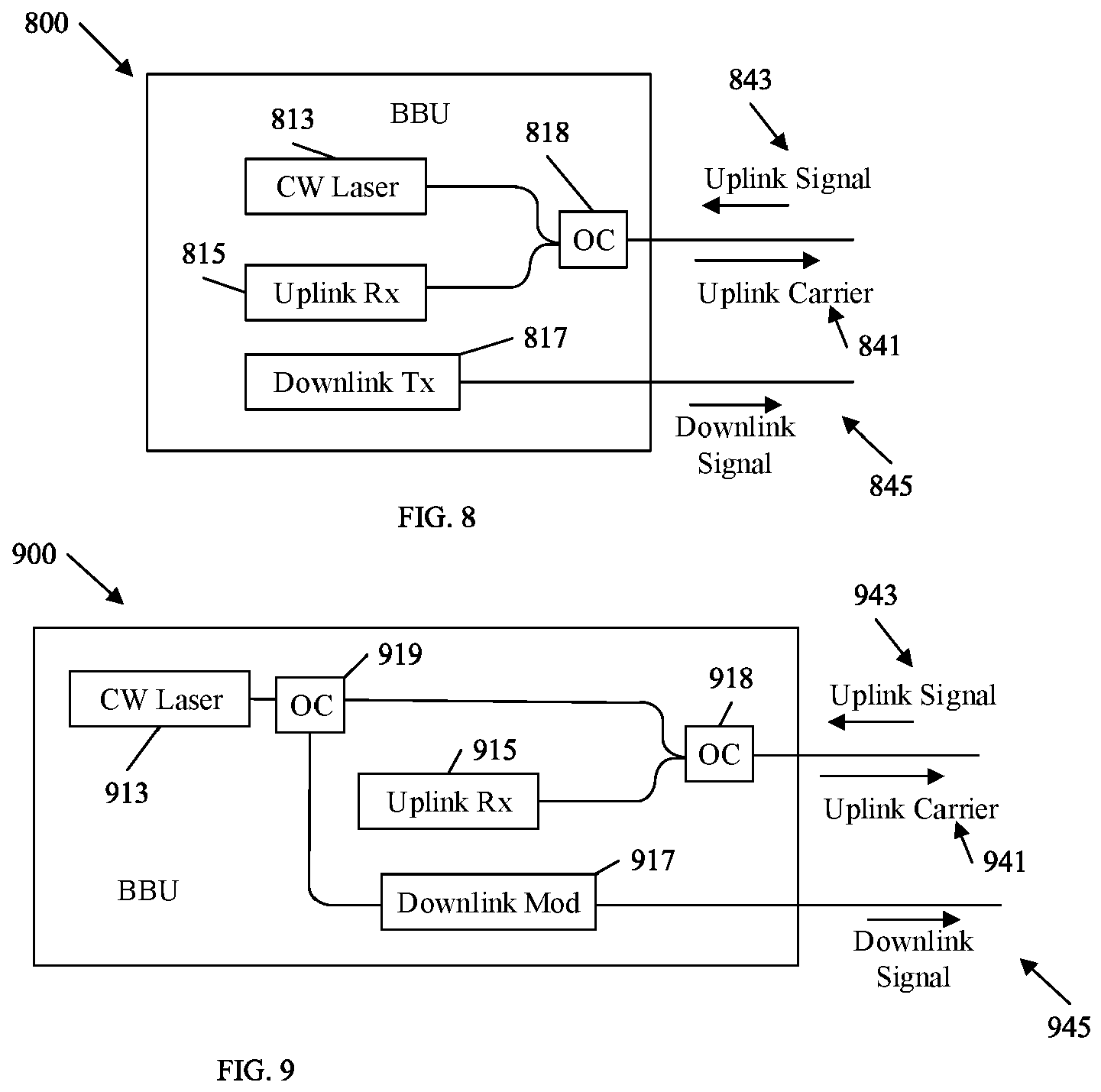 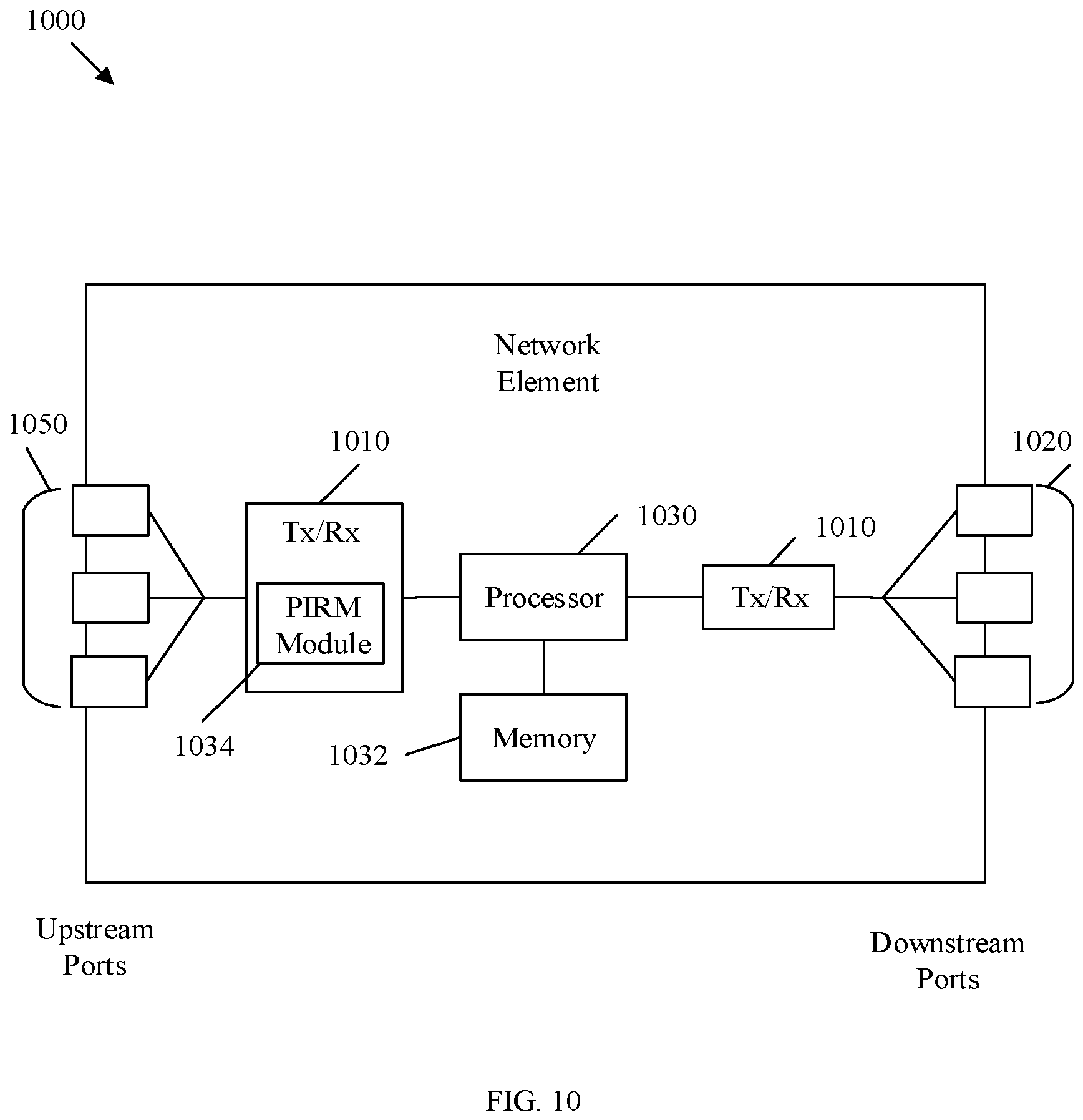 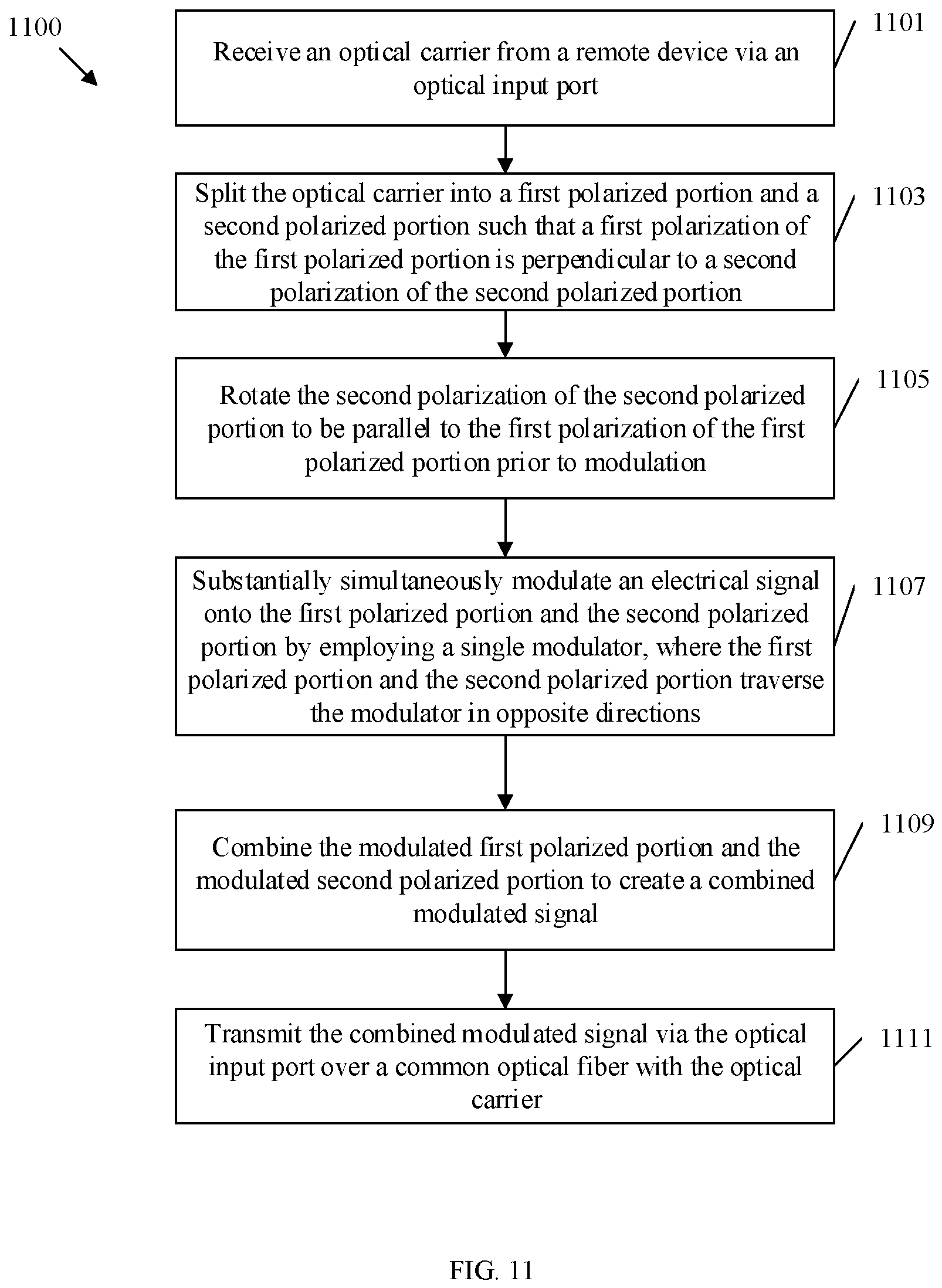 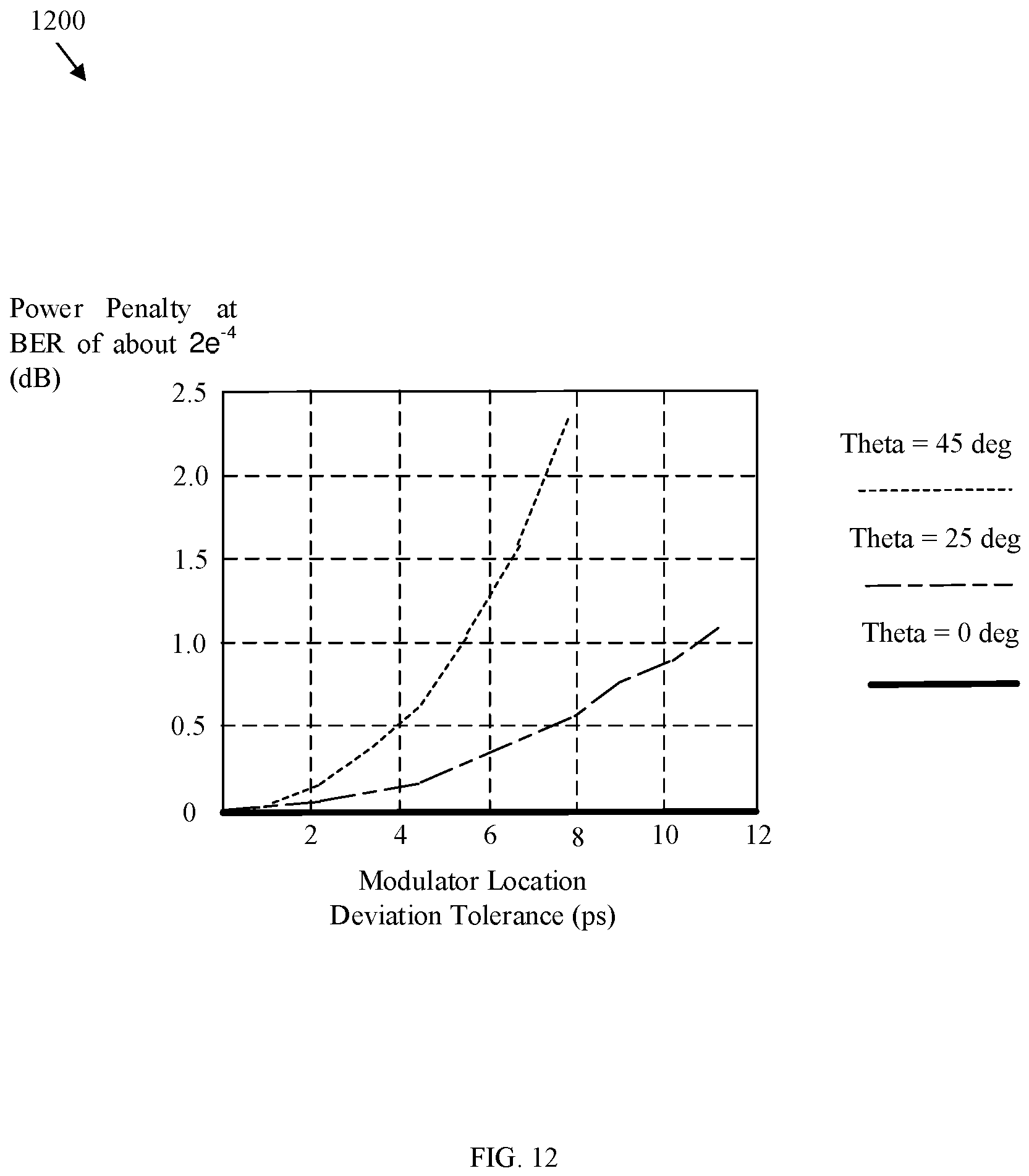